You don't have to go far from Reykjavík, Iceland's capital city, to visit beautiful waterfalls. One such waterfall is hidden away in Mosfellsdalur valley in SW-Iceland and is mainly visited by us locals. It is a hidden gem.

This waterfall is called Tröllafoss or Trolls' Falls and is located in Leirvogsá river. 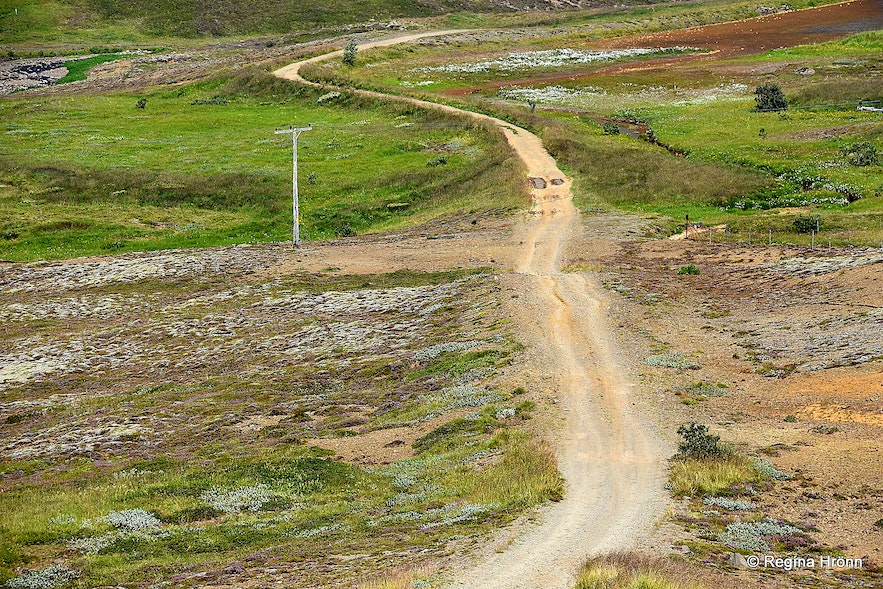 Tröllafoss waterfall is close to Skeggjastaðir farm. To find it you turn right on a trail before you reach that farm. There are two parking spaces, one for 2WD, where you can leave your car and follow the road. It is a bit far in my opinion, but I saw 3 cars parked on the upper parking lot.

We drove down the bumpy gravel road to the lower parking lot, where I pleaded with my husband to leave the car and hike the rest of the way, but he wanted to drive all the way to the falls on a very bad road. 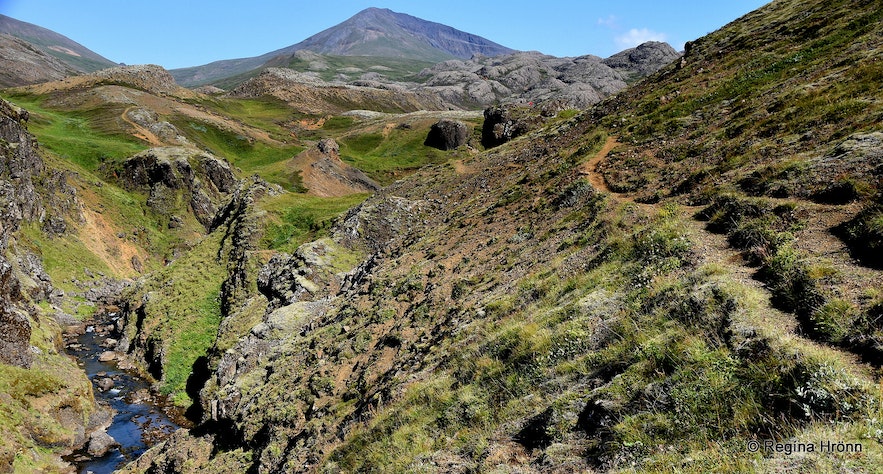 Hiking to Tröllafoss waterfall on the narrow path

I wanted to see the gorge, so I left the car and hiked above the gorge and into the gorge while he drove closer to Tröllafoss.

I followed quite a narrow gravel footpath. In one place I thought it was way too narrow, so I held on to some rocks. But then I am not known to be the bravest of hikers when I hike by gorges ;) Also the heavy cameras I am always carrying weigh me down. 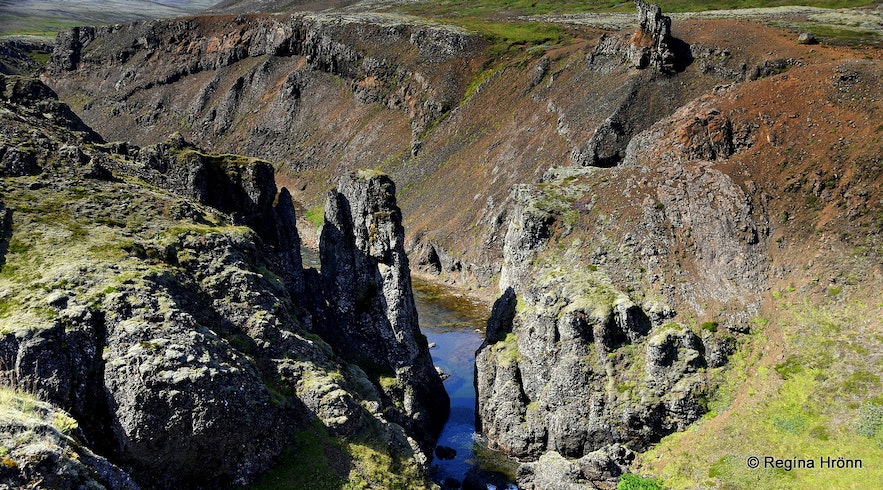 Hiking to Tröllafoss - a beautiful gorge

The gorge is absolutely amazing, so ruggedly beautiful, and I spent considerable time taking photos of the trolls in the gorge. Tröllafoss must get its name from all these trolls.

The gorge reminded me a bit of Kolugljúfur canyon in North-Iceland:

Kolugljúfur Canyon and Kolufossar in North-Iceland 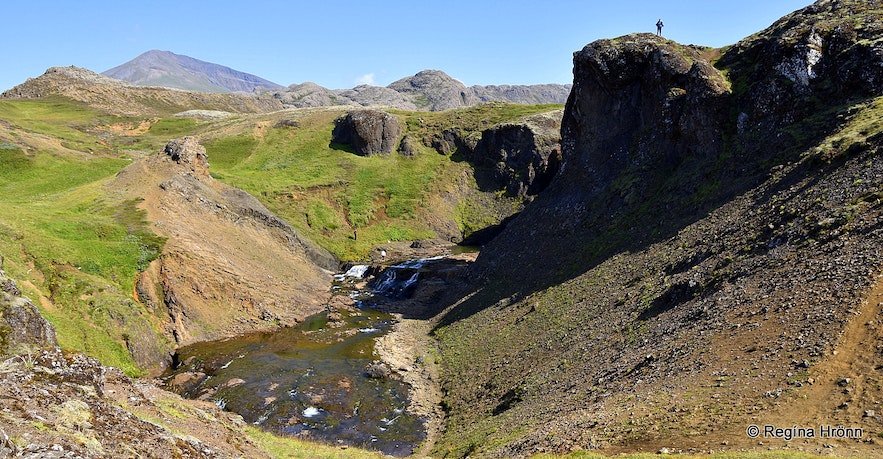 In the distance, I saw that my husband was standing on a protruding rock looking down at the waterfall. I couldn't see it from the path as a big rock was blocking it.

There is only a partial view of Tröllafoss from this side (the south side), so we walked a bit further and decided on fording the shallow river to get a better view of the waterfall. 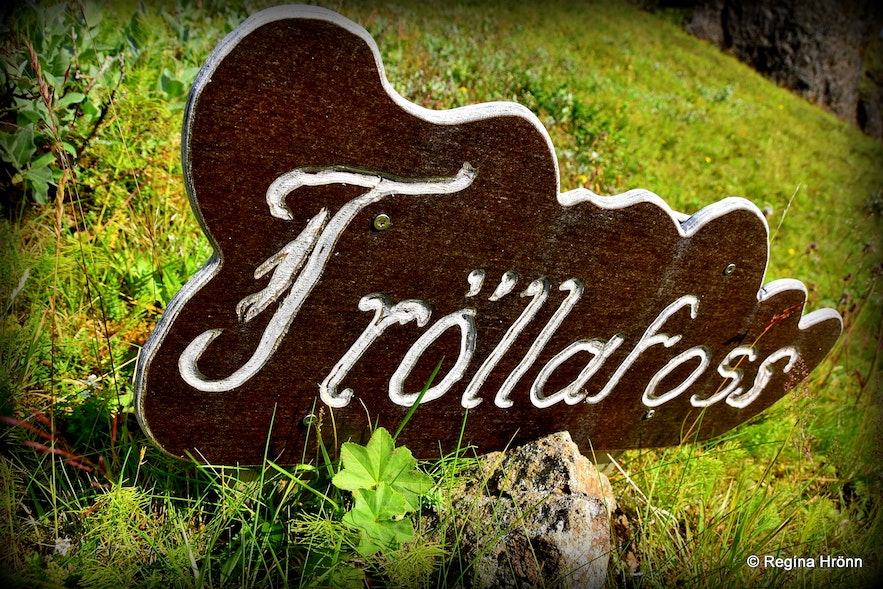 I have seen some confusion about this waterfall being located in Grímsá river, but there is another waterfall called Tröllafossar by Fossatún in Borgarfjörður in West-Iceland. You can see that waterfall and the trolls at Fossatún in my travel-blog:

A Wonderful Stay at Fossatún amongst the Trolls of West-Iceland.

Leirvogsá river originates in Lake Leirvogsvatn and is a very good and popular two-rod salmon and sea-trout river. It is 12 km long, but the fish can only swim some 8 km up the river as there they meet the impassible Tröllafoss waterfall. 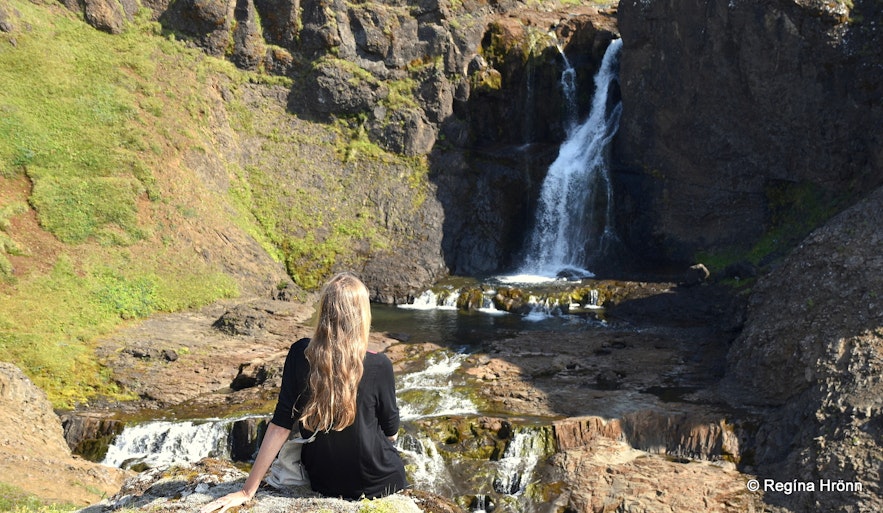 Several locals were visiting Tröllafoss, and one of them was even dipping into the small lagoon below the waterfall for a photo shoot. And many were fording the river from below Tröllafoss.

As I told you earlier then Tröllafoss is very popular amongst Icelandic people and I visited it several times as a child.

We sat down at a short distance from the waterfall and took in its beauty for the longest time. The sun had started shining and cast a mysterious light inside the gorge. When the people had left we walked down into the gorge to see Tröllafoss up close.

There were so many beautiful details in the gorge that I was in awe. And smaller, pretty waterfalls and potholes filled with water or water drizzling through them. And all these rock formations! 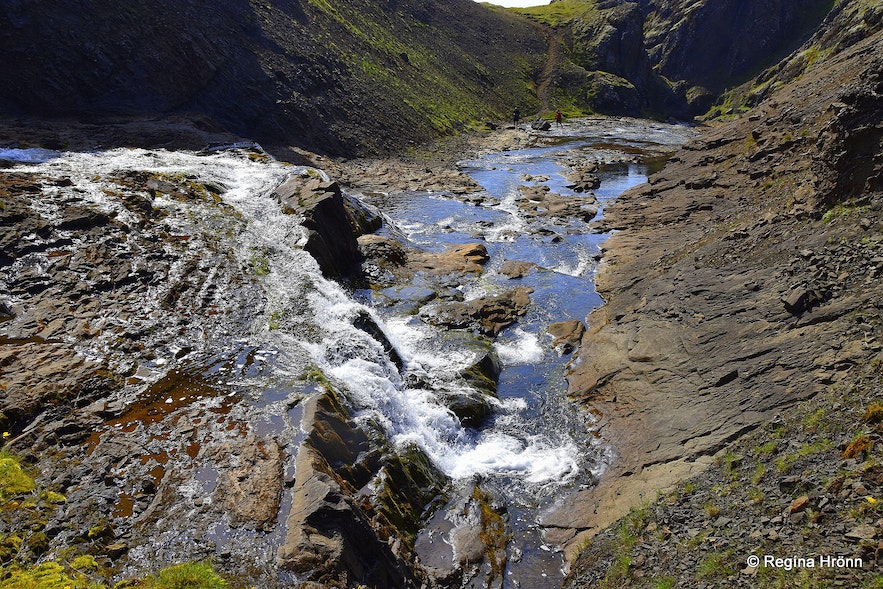 But it was also at this point that I realized that my gold necklace with a big blue aquamarine crystal, which my paternal grandfather, who was a goldsmith, had made, was missing! I have been wearing this necklace around my neck for decades and it was given to me by my grandmother, so I was quite startled.

We searched and searched for it but it was nowhere to be found. So we had to leave without it :(

It wasn't until a couple of months later that my husband returned to Tröllafoss with a metal detector that the necklace was found! Since this incident, I take off all my jewelry when I visit the countryside. 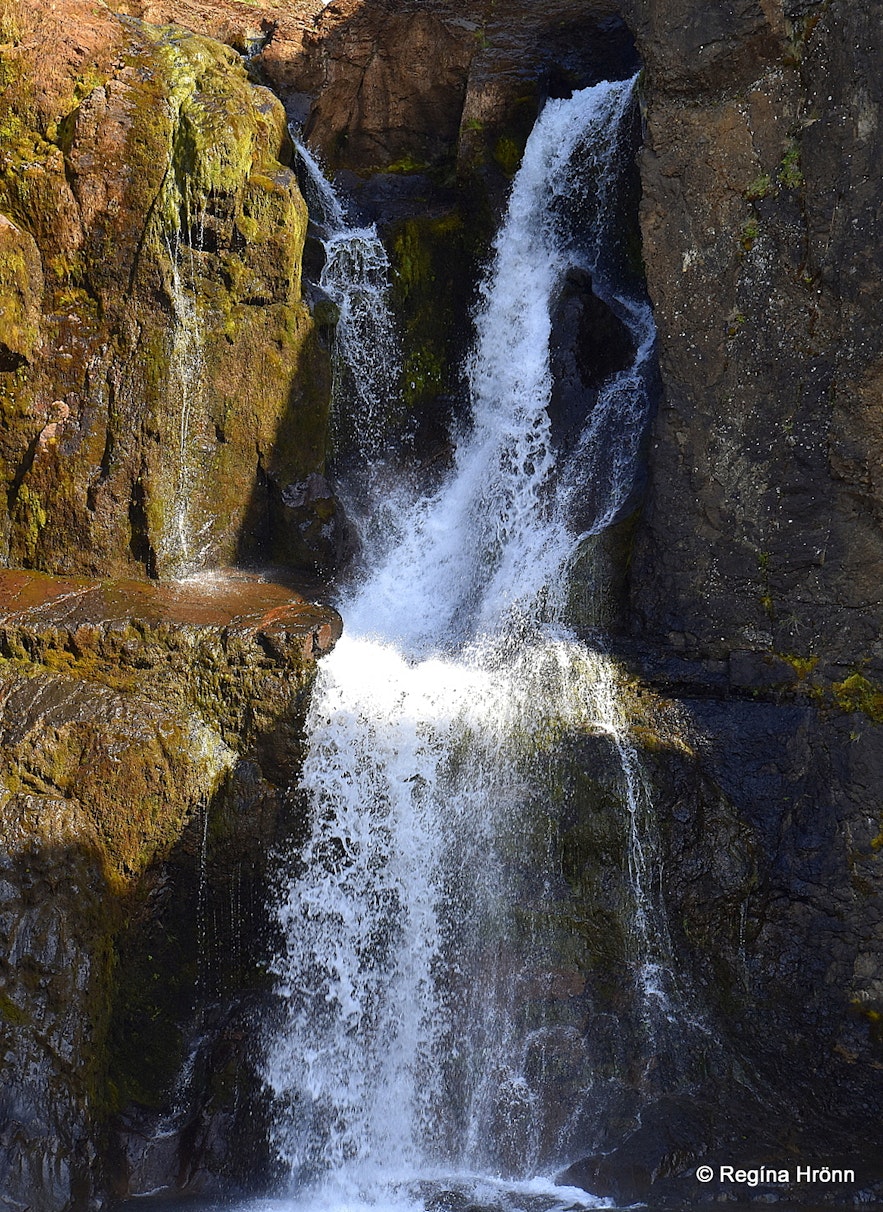 I have not been able to find any folklore related to Tröllafoss - Trolls' Falls. There should be one, but I have searched in vain and nobody seems to know why it is called by this name. If anybody knows the troll story of Tröllafoss waterfall, it would be lovely to hear it.

We have got so many stories about the trolls in our folklore, but these trolls inhabited Iceland before the first settlers arrived.

You will find many troll formations in the gorge, both by the falls and further down by the gorge. In many places in Iceland, you will find two trolls called Karl and Kerling or the Giant and the Giantess. 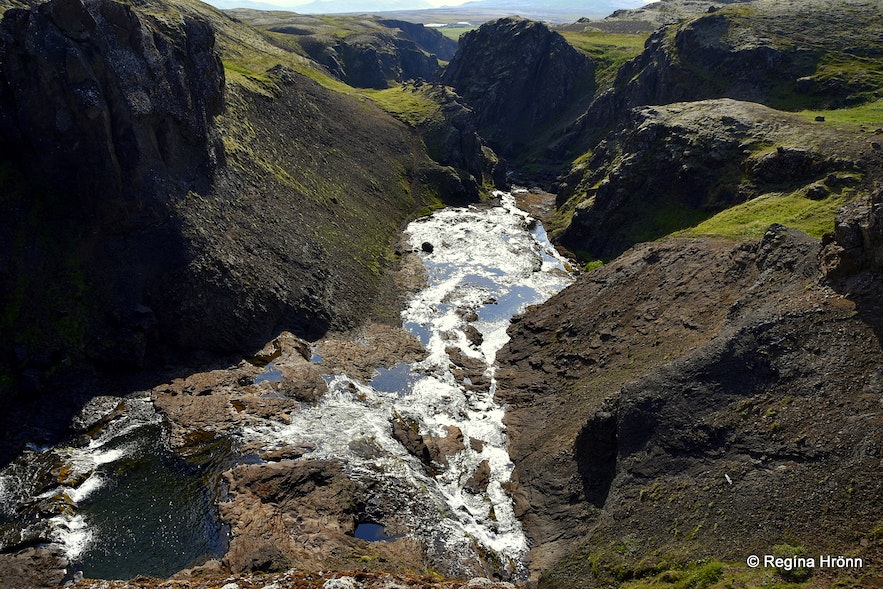 They are a troll-couple with folklore connected to them, in which it is explained how it came about that they were turned into stone. It is common knowledge here in Iceland that the trolls get turned into stone when the first rays of the sun shine upon them.

Here are a couple of travel-blogs about such trolls: 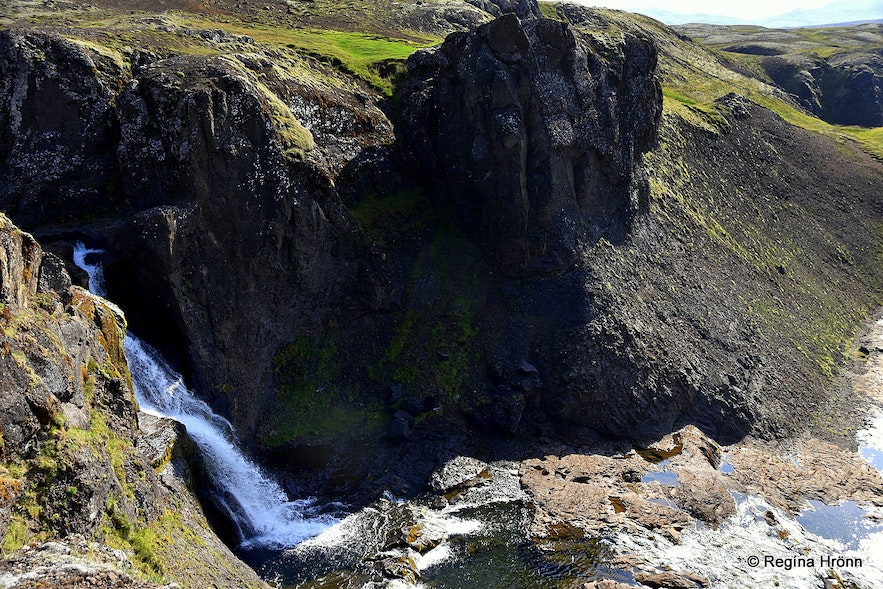 A huge troll by Tröllafoss waterfall

Trolls are not Christian and are only up and about at night as they cannot tolerate daylight. Thus they are called nátttröll or night trolls. They also cannot stand hearing church bells ringing, as I have told you in other travel-blogs:

The gorge is so ruggedly beautiful

After searching in vain for my necklace we left, forded the river again, and took some photos of the gorge in a different light. Since my husband had parked right above the waterfall I accompanied him.

He didn't want to drive back the same way so we crossed the Leirvogsá river above the waterfall and continued driving eastbound on this bad gravel road. 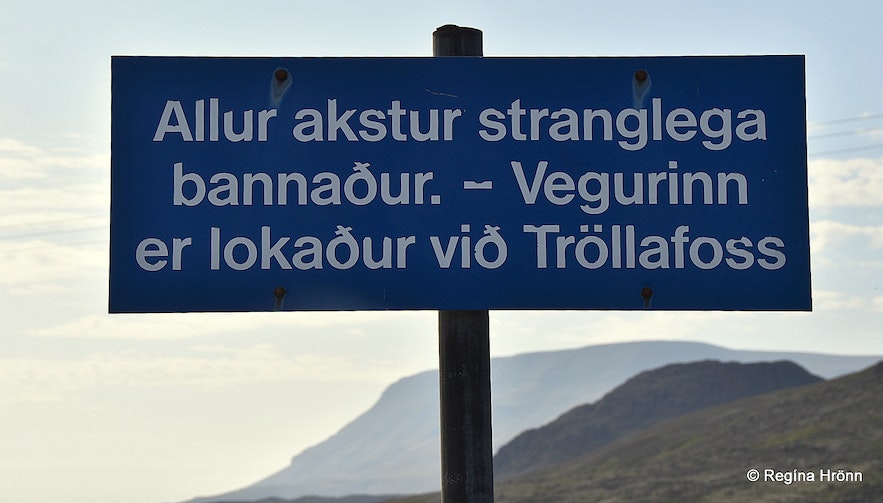 It is not my style doing something that is prohibited, so maybe there should have been a sign on the other side as well?

Do not follow our example and just leave the car on the upper or lower parking lot and walk up to the falls. 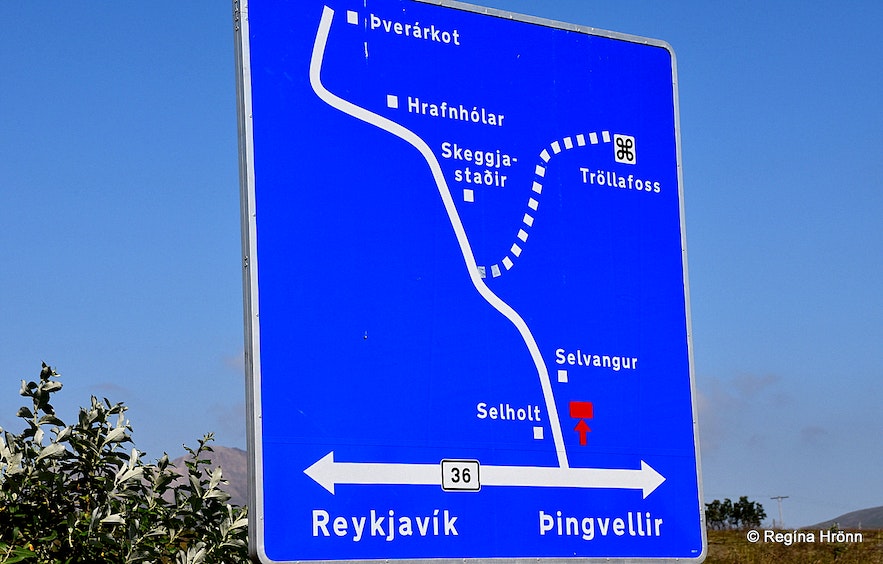 The sign by road 36 leading to Þingvellir national park

If you turn left on road 36 instead of driving back to Reykjavík this road will take you on the Golden Circle, Iceland's most popular route, leading to Þingvellir, Laugarvatnshellir cave, the Geysir geothermal area, and Gullfoss waterfall:

To visit this area you can rent a car in Reykjavík.

For another way of visiting Tröllafoss, where you use a rope check out Crisscrossiceland. Be very careful though as recently 2 people got trapped in the gorge and had to be rescued. You can see photos from the rescue on Monitor.

Have a lovely time at Tröllfoss and on the Golden Circle :)