While staying at Kirkjuból at Strandir for 3 days I visited 2 of the trolls. I had already visited the 3rd troll on several occasions, but that troll is to be found across Steingrímsfjörður bay and gives the name to Drangsnes. 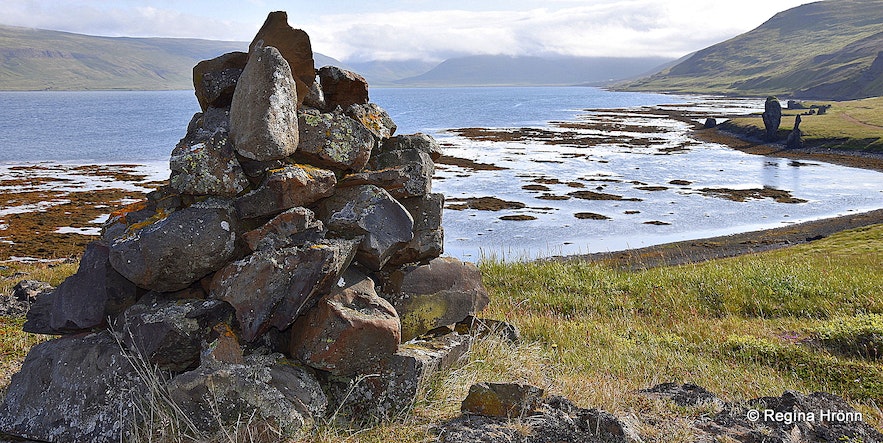 The 2 trolls in the distance in Kollafjörður

I had been looking for the 2 remaining trolls for some time and had driven past them several times without knowing their exact location.

The farmers at Kirkjuból, who run the Kirkjuból guesthouse and Sauðfjársetrið - the Sheep Farming Museum - told me where to find them. The gravel road leading to the trolls is not marked so you will have to know the exact location. They are located at 65.603922, -21.411752.

Kollafjarðarneskirkja church in the distance and the 2 trolls

You will see Kollafjarðarneskirkja church down by the sea from the main road. After you see the church from the road, drive for about half a kilometre on road 68, until you reach an unmarked gravel road on your left.

Drive down this road in the direction of the sea until you see the cairn in my second photo. In the distance, you will see the 2 trolls. It is best to leave your car there and walk down to the trolls. There is a very bumpy and rocky trail leading to the trolls so it is best to walk. 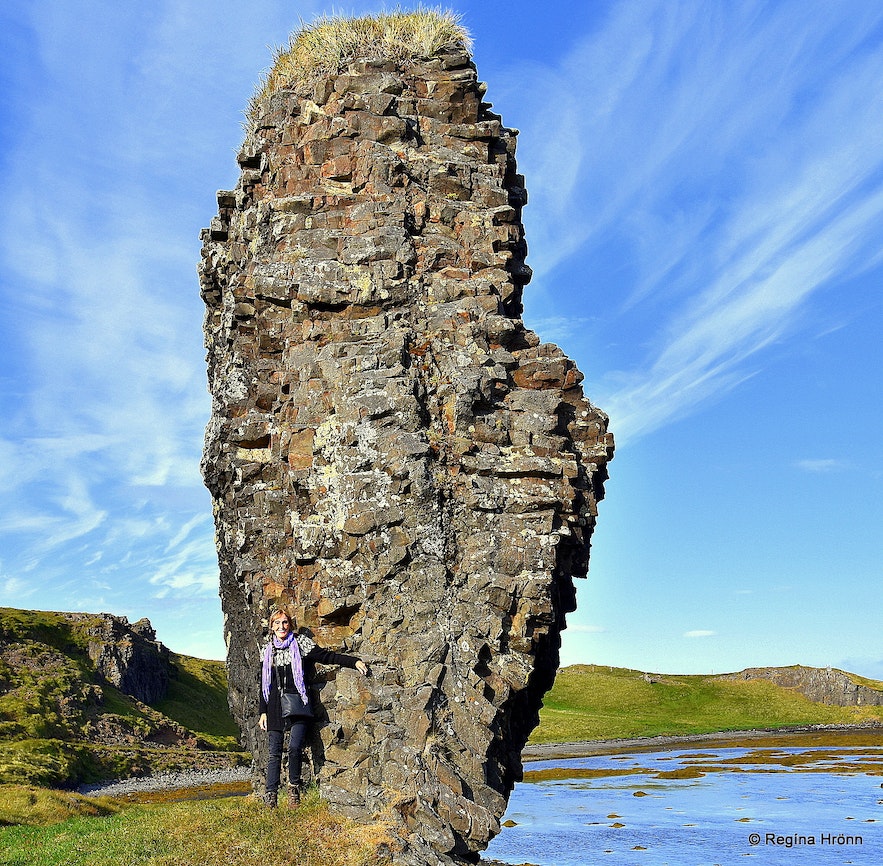 One of the Westfjord trolls

I found the folklore in Þjóðsögur Jóns Árnasonar - the Collection of Folklore by Jón Árnason. It is called Tröllin á Vestfjörðum or the Trolls in the Westfjords and goes like this:

"In ancient times (after the settlement of Iceland) there were three trolls in the Westfjords who wanted to dig a channel between the Westfjords and the other country (the mainland of Iceland), between Gilsfjörður and Kollafjörður fjords, close to where it is at its narrowest." 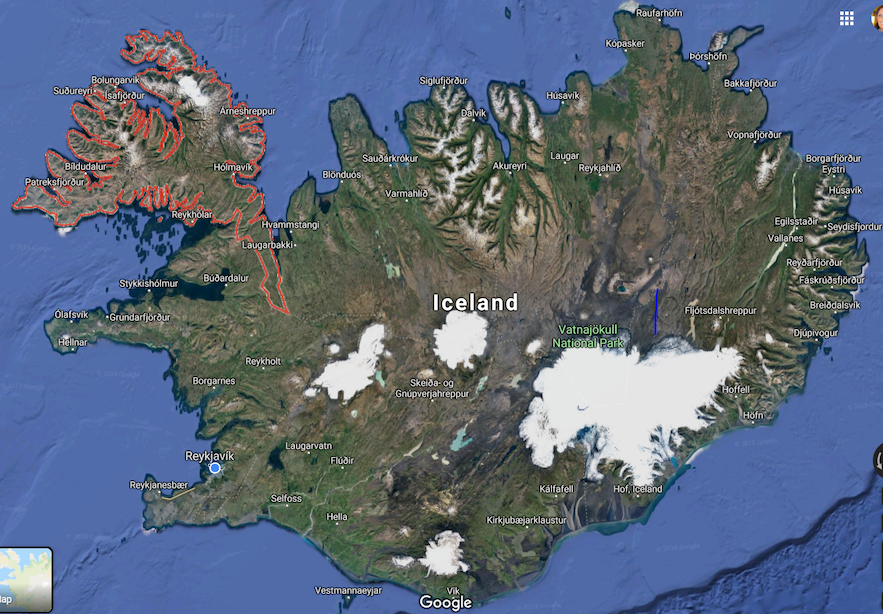 We locals often refer to the Westfjords as the head of Iceland and you will see why if you look at the map.

So the trolls wanted to dig through the neck and sever the head from the rest of Iceland. 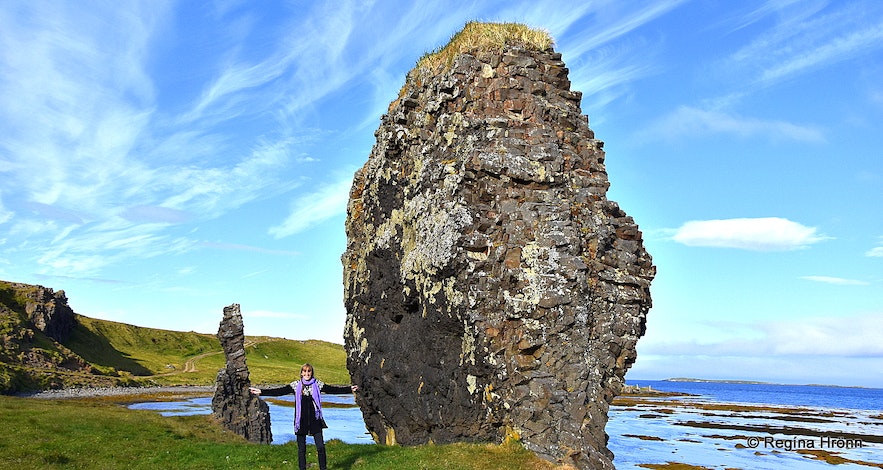 Holding hands with two of the Westfjord trolls

"At the same time, the trolls had another purpose; they wanted to build islands from the material they dug from the channel.

The trolls digging on the west side had a speedier process, as Breiðafjörður bay was shallower than Húnaflói and two trolls were digging there, Karl and Kerling, and they formed all the islands dotted on Breiðafjörður, looking like skyr with berries."

These islands are innumerable and counted among the 3 innumerable things in Icelandic nature. I have written another travel-blog about a boat tour on Breiðafjörður, where you can see some of the many islands: 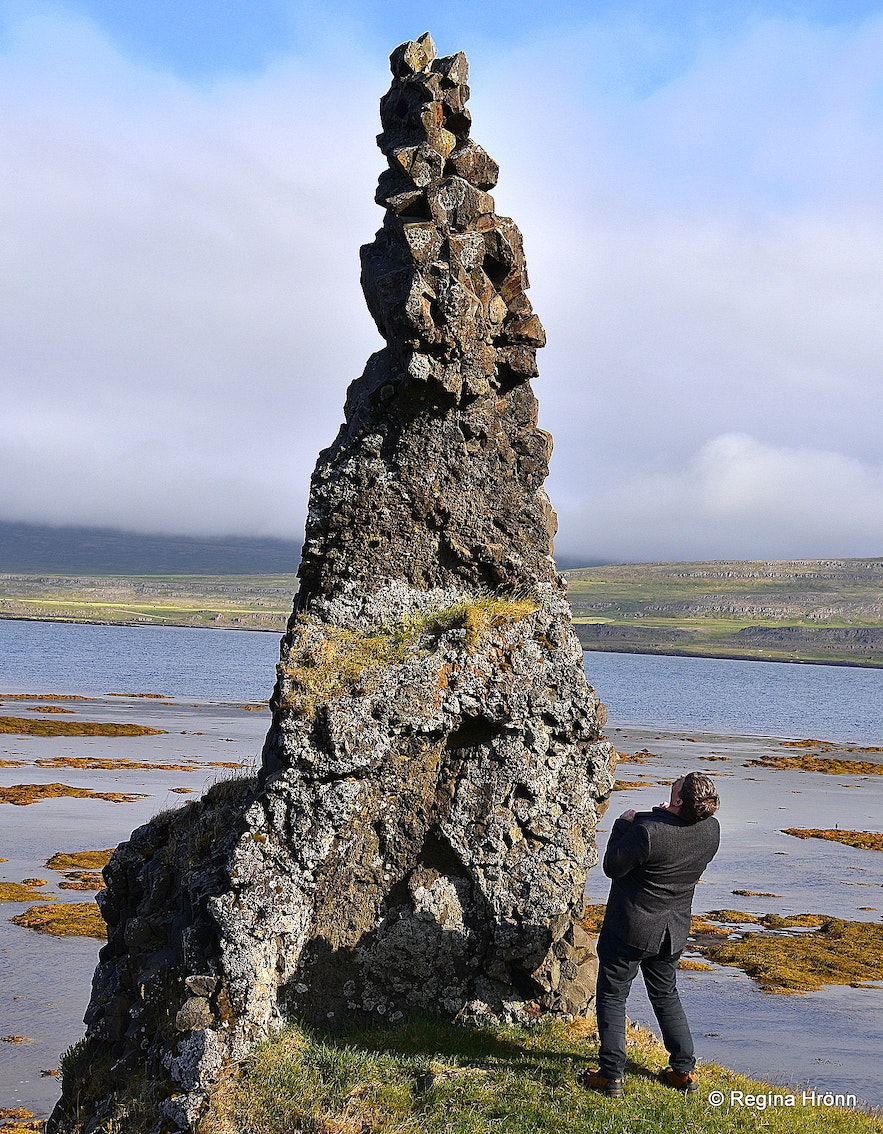 One of the Westfjord trolls and my husband

"But the troll woman Kerling on the east side wasn't making much progress by herself, as Húnaflói bay is both deeper and the islands she was supposed to create turned into sunken skerries; everything went awry.

The trolls were digging through the night and didn't pay attention to how quickly time passed and that the sun was rising.

When they noticed, the trolls on the west side started running and ran as fast as they could east and north across Steinadalsheiði heath and meant to hide in Kollafjörður bay. 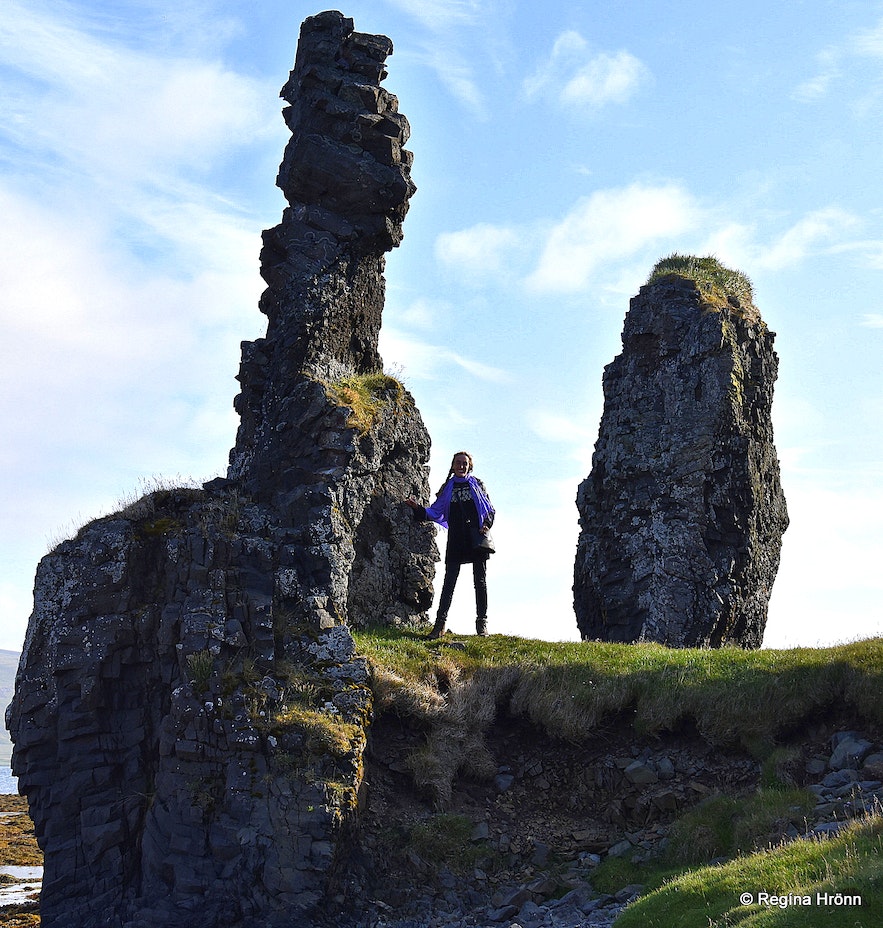 With two of the Westfjord trolls

But as they reached the seafront the sun rose and they got turned into rocks, which are called Drangar. (As we all know then night-trolls get turned into stone by the sun). They stand together at Drangavík close to Kollafjarðarnes cape.

The bigger rock, which is narrower at the bottom is Karl, the Troll, and the other rock is peaked, and fatter at the bottom, so it looks like it has a stomach and even thighs; that is Kerling or the female troll. 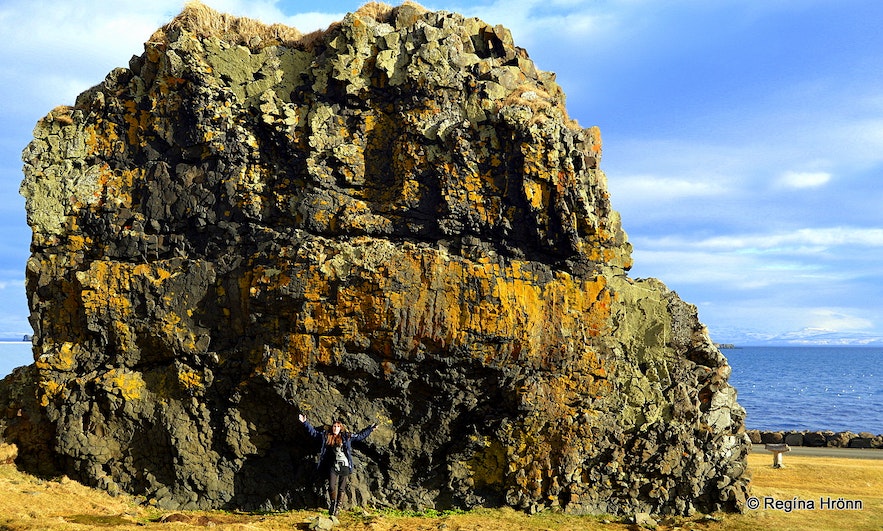 The Kerling who was digging on the east side also got caught by the rays of the sun.

As she noticed the sunrise she jumped north across Steinsgrímsfjörður fjord and stopped by an escarpment north of the fjord, by the name of Malarhorn, where the sun shone upon her. 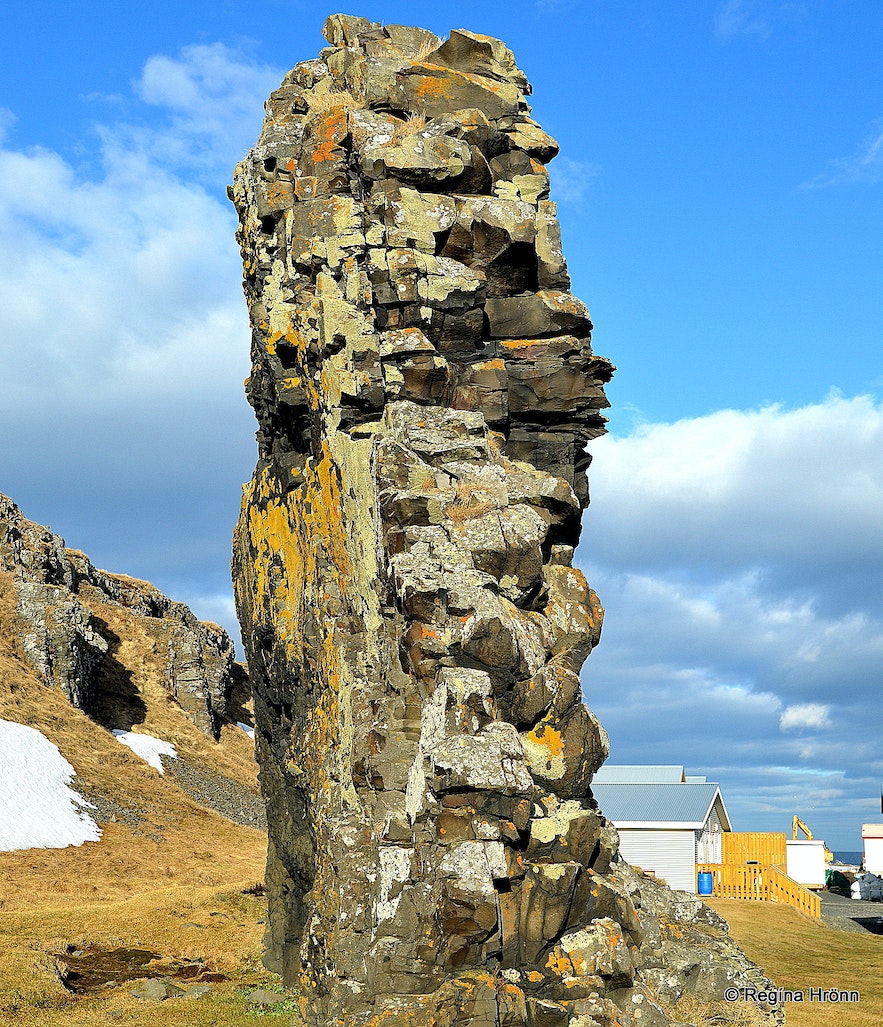 Kerling was livid as she had not been able to create but a few islets and skerries on the Húnaflói bay, that she slammed her shovel down in anger, and the big blow broke off a piece of land which formed Grímsey island, which still stands in Steingrímsfjörður fjord.

It is the only big island that Kerling was able to create. The story goes that the rocks on the island are of the same material as at Malarhorn, so they seem to be created from the same rock.

Kerling was turned into stone as well while looking back at her bull on the island.

Drangur Kerling looking in the direction of her bull by Grímsey island. It is located at Malarhorn close to the swimming pool in Drangsnes

"Since then nobody has tried to separate the Westfjords from the mainland nor tried to create islands and skerries on the Húnaflói bay and Breiðafjörður fjord".

This was the story about the 3 trolls, who meant to separate the Westfjords Region from the mainland of Iceland. I love such stories and search for their locations on my travels around Iceland.

I have heard an explanation about why the trolls wanted to keep the Westfjords Region to themselves and live there while the Vikings could keep the mainland.

Trolls are not Christian and hate the sound of church bells, so they most likely just wanted to stay in peace in the Westfjords Region and well away from the church bells in Iceland. 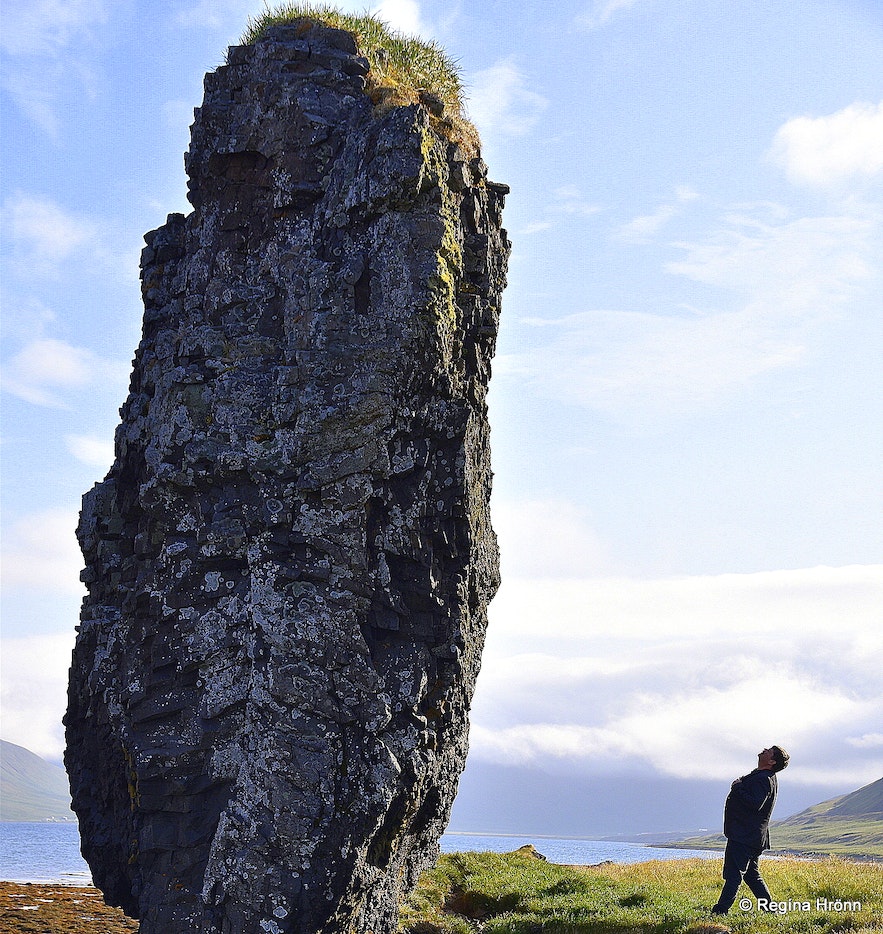 The troll in Kollafjörður is huge compared to my husband

You will see such pillars of rock in many places in Iceland and many of them have folklore connected to them. They are either called Kerling or Karl, depending on their sex and they usually come in pairs; Karl and Kerling.

Not the one in Drangsnes though as she stands alone and has no male troll, only the bull.

Drangsnes gets its name from this pillar of rock, but such a pillar of rock is called drangur in Icelandic. The pillars of rock in this travel-blog are typical dykes. 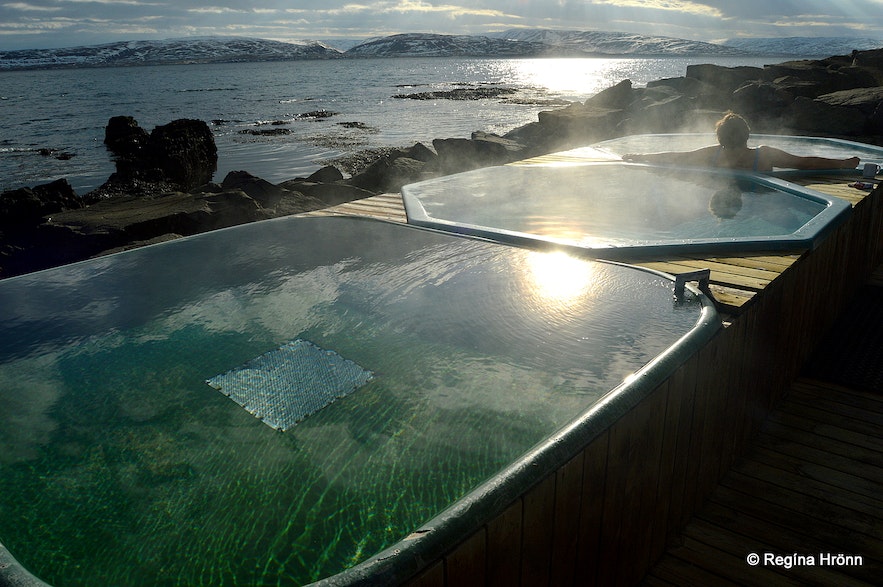 The hot tubs by the sea in Drangsnes at Strandir in the Westfjords Region, the Troll, and the Hot Tubs

I have written a long travel-blog about my trip to Strandir The remote Strandir in the Westfjords Region of Iceland - Stillness & Sorcery if you want to know what this sparsely populated area of the Westfjords has got to offer.

And if you want to see an elf-rock close to the Westfjord trolls, then I have included it in my previous travel-blog: 3 Wonderful Days at Kirkjuból and the Sheep Farming Museum at Strandir in the Westfjords Region.

Also check out the interesting villages close by:

Have a lovely time at Strandir and I hope you get to greet the trolls :)