In Skagafjörður in North-Iceland, you will find a big turf house; Glaumbær turf farm - but there is another less visited turf farm in Skagafjörður as well, close to ring-road 1, but off the beaten track. It is called Tyrfingsstaðir turf farm at Kjálki.

The first written source on this turf farm is a contract of sale which dates back to 8th of January 1478, but it is believed that there has been a farm here since before the year 1300.

You will find several turf houses at Kjálki; the turf farm, which consists of 5 buildings and 4 outhouses, one of which has a stockyard. These turf houses date back to 1870-1895.

I love the turf house with the timber house facade, which dates back to 1904. So cute somehow and I am so glad that some of the turf houses in Iceland have remained, so we can see how Icelanders used to live.

​These turf houses are made of turf, stone, and timber. Some of the walls and the gables are made from turf alone, creating a beautiful pattern. The roof is turf, which makes the turf house blend in perfectly with the surrounding nature. The walls on the inside are panelled with staves.

It is a beautiful sight looking at these turf houses from above and totally takes one back to the olden days. The landscape is breathtaking here, with the magnificent red gorge in the background. It is just like looking at a painting, don't you agree? 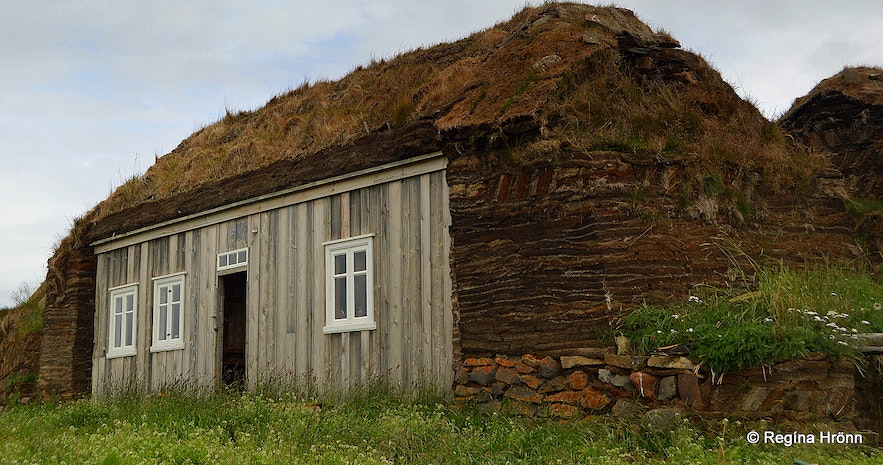 Tyrfingsstaðir turf farm was inhabited until 1969 and parts of the turf farm were restored in 1960. There is a new farm at Tyrfingsstaðir and the owner of the land, Kristín Jóhannsdóttir, lived on the old turf farm with her parents for 25 years (since 1944). In 1969 the family moved to Sauðárkrókur town, but Kristín, who is the only child of her parents, moved back to Tyrfingsstaðir.

Since 2007 the turf houses at Tyrfingsstaðir have been restored and used for teaching the old methods of building turf houses.

The timber building is the main building and connected to it is a lamb shed and a cowshed. There are other outhouses on the land closer to the gorge. These outhouses, which are stables and sheep-cotes, date back to the 19th and 20th century and are in ruins, but still worth a visit. 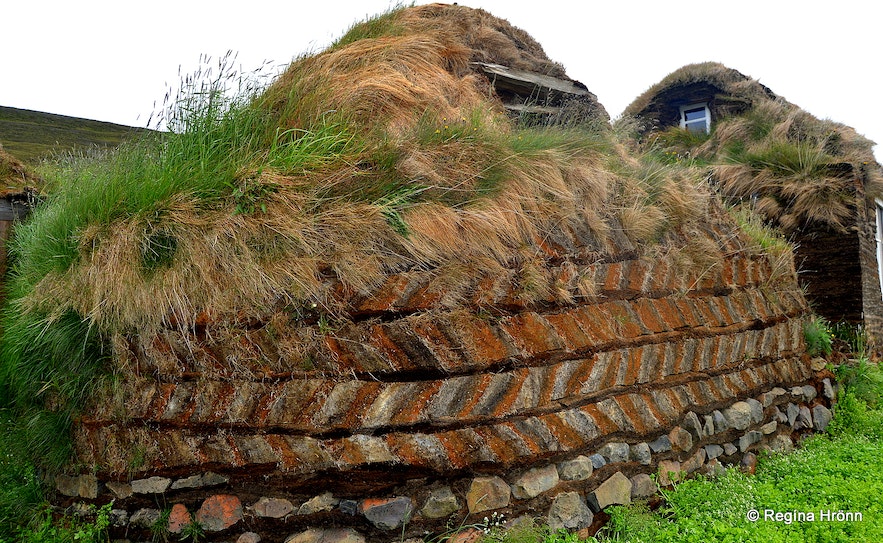 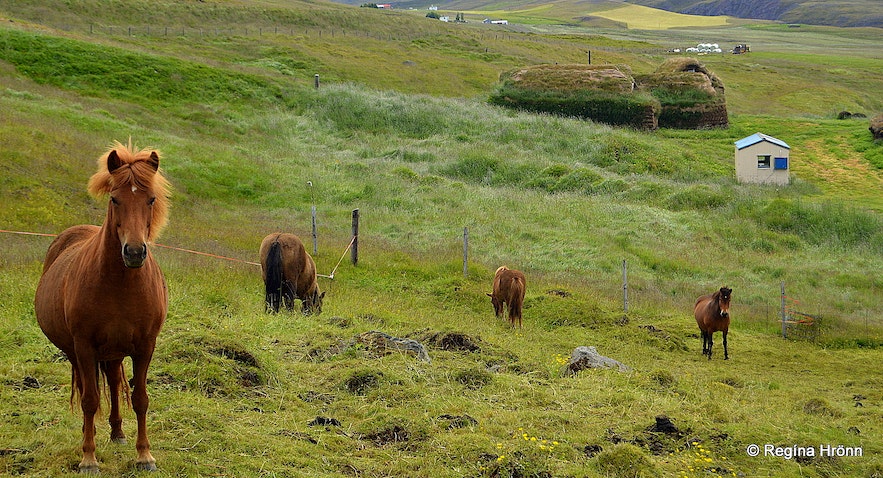 I recently met Helgi Sigurðsson, the teacher at the school Fornverkaskólinn - Heritage Crafts School, which teaches the old ways of building a turf house, turf laying and such. Fornverkaskólinn is a collaborative project of the Skagafjörður Heritage Museum, the Hólar University College and the North-West Iceland Comprehensive College.

​Helgi was restoring the outhouses at Þverá turf houses during my visit there, and he told me about the workshops at Tyrfingsstaðir.

The workshops at Tyrfingsstaðir turf houses are held in September and I plan on joining a workshop, which lasts for 5 days. The website is in Icelandic, but here is the link to the photos from prior seminars. Around 300 students have finished this workshop, both Icelandic and foreign students. 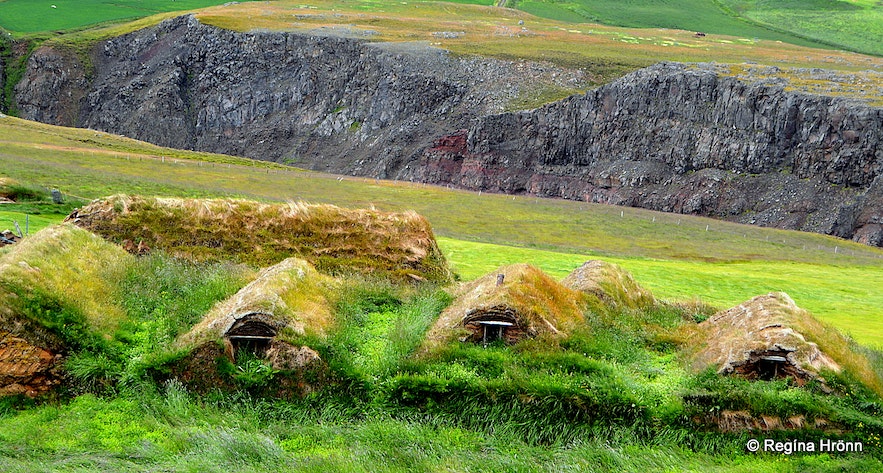 Helgi is in charge of the restoration of all of the remaining turf houses, which are located in different parts of Iceland. It is a massive task to maintain all the turf houses in Iceland.

I am grateful that the remaining turf houses are maintained so well as they are a big part of Iceland's history. 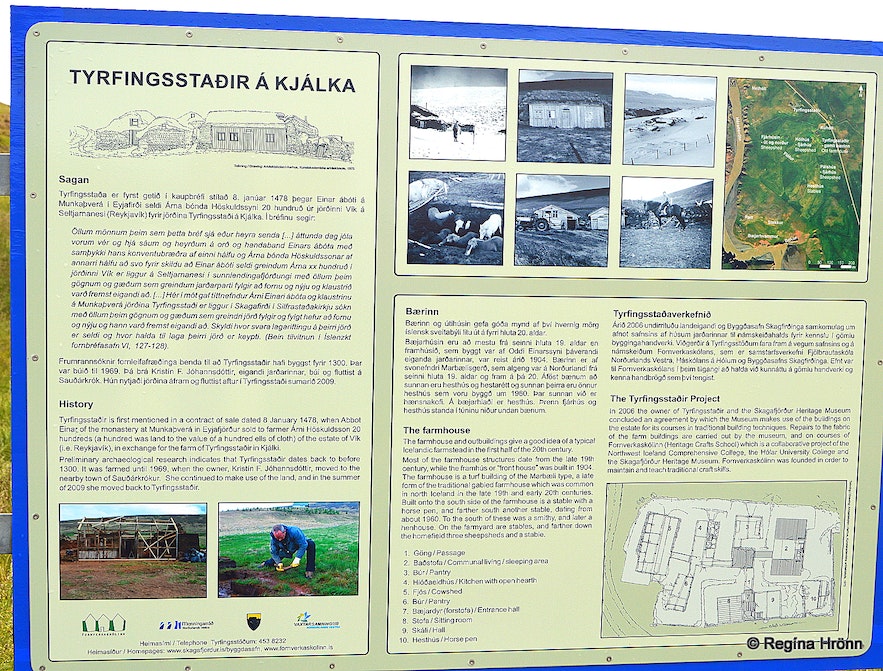 This area by Kjálki leads to the uninhabited highland valley called Austurdalur. In the beautiful gorge runs the glacial river Austari Jökulsá, which together with Vestari Jökulsá forms Héraðsvötn not far from Tyrfingsstaðir turf houses.

There is a very popular river rafting in Austari Jökulsá with guided tours. This gorge is so magnificent that it must be awesome sailing on the river. I must try it out one day, even though I am always a bit scared of these cold, forceful glacial rivers.

I spotted people river rafting in Austari-Jökulsá during my visit

I also visited the other side of the glacial river Austari-Jökulsá, to find out what there is to see and do in this part of Skagafjörður. We drove as far as we could until we reached the bridge of Monika at Merkigil and crossed it. It is so narrow that I chose to cross it on foot while my husband drove across it.

On the way back I sat in the car, but I was not at ease. At Merkigil Monika lived with her 7 daughters and 1 son. After a long battle, the glacial river was finally bridged, which made Monika's life a lot easier.

The gorges in this area are both deep and dramatic. Close by is the notorious Merkigil gorge itself, but the last owner of the farm Merkigil, Helgi, fell to his death into the Merkigil gorge back in 1997. 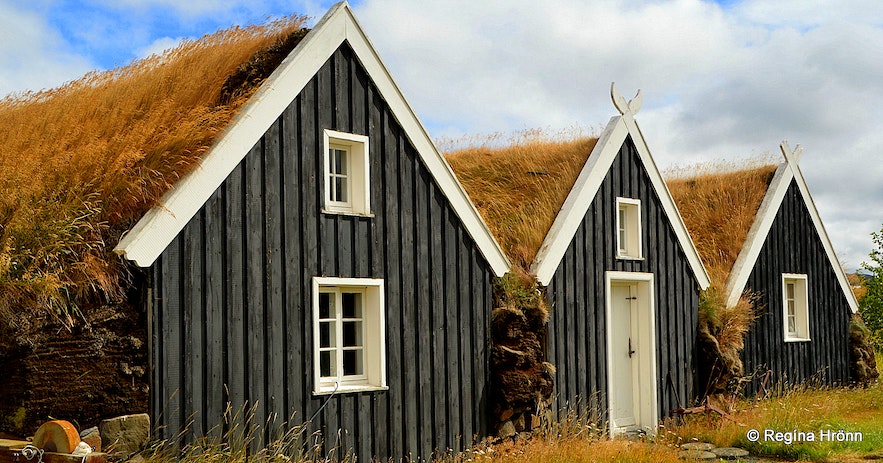 The turf house at Reykir

You can see both these turf houses in my travel-blog A List of the beautiful Icelandic Turf Houses, which I have visited on my travels in Iceland.

We also saw a real gift from the Icelandic elves; a silver cross given to a young boy at Ánastaðir farm, with a very interesting elf-story connected to it. I read that elf story in the book written about Monika in Merkigil, but I will skip it here in this travel-blog.

We checked out the gorge across the river from Tyrfingsstaðir. It is such a beautiful colourful gorge with many protruding dykes.

To reach Tyrfingsstaðir turf house you can rent a car in Reykjavík and drive up north. Drive in Skagafjörður on ring-road 1 instead of continuing driving into Norðurárdalur and Öxnadalsheiði heath, turn on road 759, which is a gravel road. 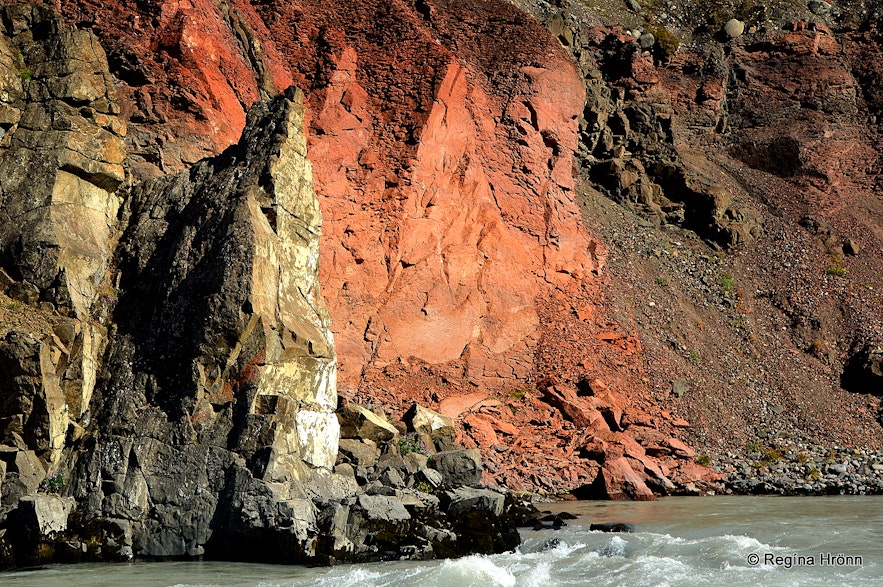 The gorge by Austari-Jökulsá is so beautiful

A huge dyke by the glacial river

Have a lovely time visiting the beautiful Skagafjörður :)