Getting Your Flippers Wet in Iceland

Thingvellir National Park is a protected area of striking natural beauty around 40km east of Iceland's capital Reykjavik. It was the site of Iceland’s very first parliament back in A.D. 930, but more than this, it was also the world’s first democratically elected parliament, so thanks to its rich history the area has become a bit of a natural treasure to the Icelandic people.

History aside, it is a place of extreme natural beauty and continues to develop, not only an intricate and delicately balanced ecosystem, but prestige on a global scale as one of the earth’s rare and untouched wonders.

Nature? Talk to Me.

Not only is the park itself clearly stunning, but it is an area of vast scientific interest to researchers from all over the world. New species are often discovered here - most recently those of blind cave animals - and the variety of flora and fauna keeps the area firmly on the maps of those with a love of nature.

The park sits on a fissure zone (not as unpleasant as it sounds) – in other words, a vent through which lava erupts. No need to fear though it seems to have blown off quite a lot of steam over the years and the last eruption occurred around 2000 years ago.

The topography is wonderfully diverse, with sloping rock faces and greenery surrounding the lake that's all connected to Iceland’s astonishing geothermal system. Speaking of which, the geothermal activity that has occurred here over the years has led to an utterly unique situation that divers have been travelling from all corners of the globe to take advantage of. 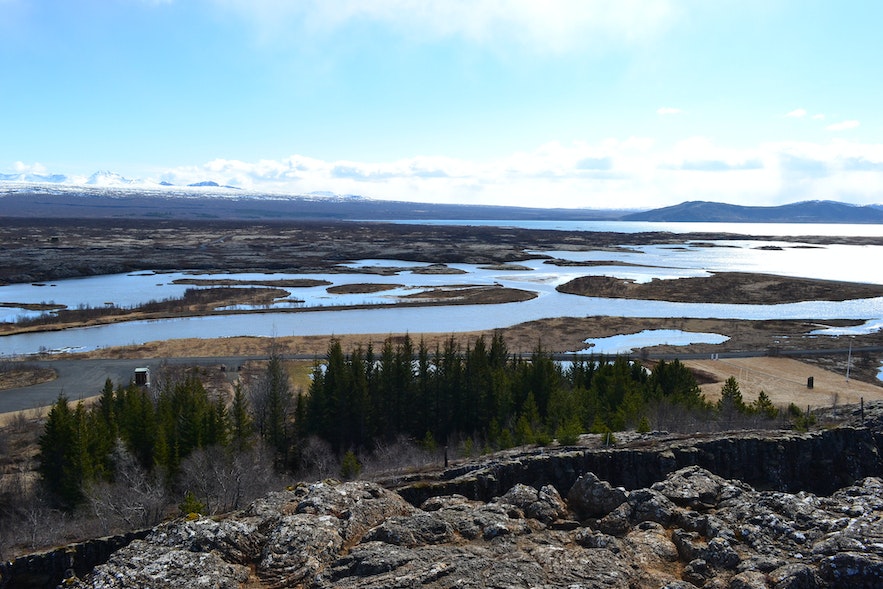 This isn’t just any lake. This is where two continents collide - or should I say separate - in magnificent fashion, and there’s no place quite like it on earth. At 114 meters deep and with a surface area of 84 km squared, this almighty beast is Iceland’s largest natural lake.

The waters here are literally crystal clear, with visibility below of around 100 meters beneath the lake’s glossy, blue surface, making it one of the clearest bodies of water on the planet.

The North American and Eurasian tectonic plates which cut through the earth beneath provide a once in a life time experience where you can feasibly float from one continent to another, take in the scenery, then return once more with no need for a visa! There’s no *great* rush though, as scientists have documented the plates as retreating by 2 cm per year. 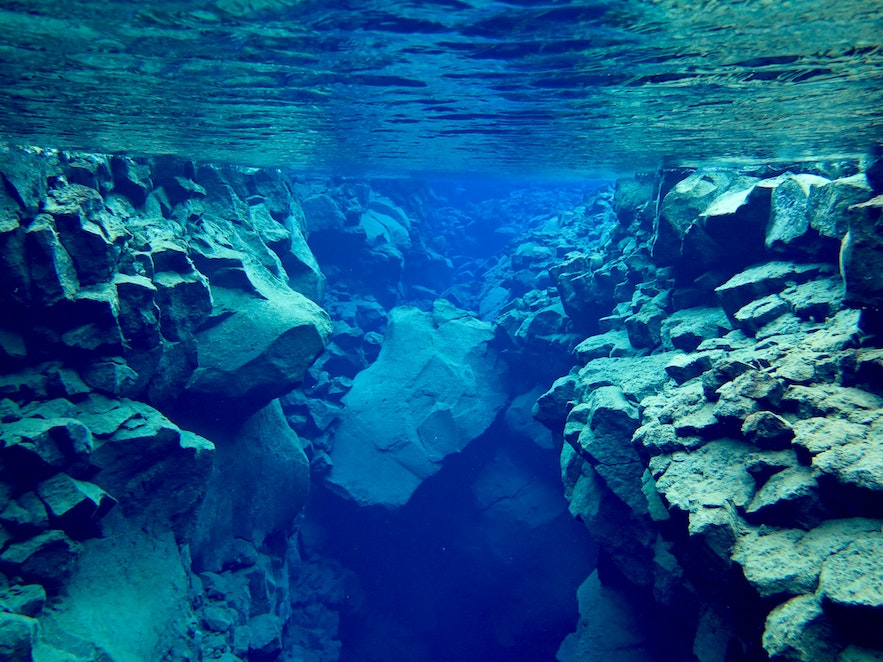 A million miles away from diving exotic, tropical reefs, the colour palette here is vastly different. Yet with vibrant shades of blues and green a plenty, the diving here remains as much an act of theatre as it is one of education.

The lake is full of happily swimming marine life, however, the fissure itself tends to be a relatively fish-free zone, with the exception of a few wandering souls. Rocks clad with luminous troll hair and algae dominate the underwater landscape and serves as a wonderful juxtaposition to what can be found on dry land above.

As you can imagine, the water is pretty chilly down there. Temperatures tend to sit at around 2 degrees Celsius, so the fissure never freezes over, but you’ll certainly need a dry suit! The park itself isn’t able to lend gear, so be sure to prep accordingly, or if you’re inexperienced, find a local company to take care of the nitty gritty for you.

The water is unparalleled in purity, as it is filtered underground for up to 100 years before it even reaches the lake and slowly trickles out. Astonishing clarity!

Much like when you visit the salt mines of Poland and are told to lick the wall, don’t be surprised if your guide encourages you to take a sip of your surroundings. It’s that pure!

There are four main parts to the fissure to explored, and at points you can almost touch both continents at the same time before the plates widen again. Be sure to take your underwater camera with you, as the outright crispness of it all will provide opportunities for photography like nowhere else. 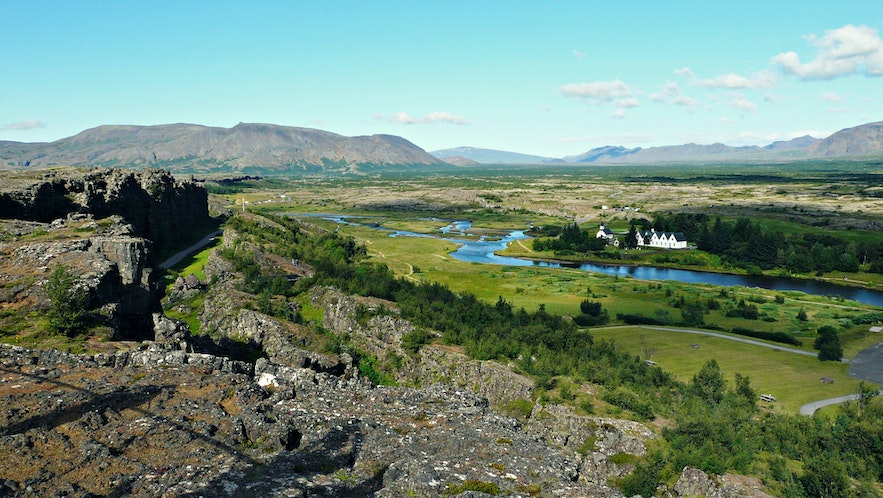 Do I Need A PADI?

For those of you who aren’t keen on getting your hair wet, there is the option to snorkel the Silfra Fissure, but, of course there’s nothing quite like diving deep into another world.

You’ll need a PADI licence to dive here, and you’ll be able to explore down to depths of 18 metres, so those of you who choose to dive will really be able to take advantage of everything it has to offer.

You’ll need to obtain a diving permit prior to arriving at the lake, however, these can easily be obtained from the park’s Information Centre or their website, or it is arranged for you when you're a part of a diving tour. 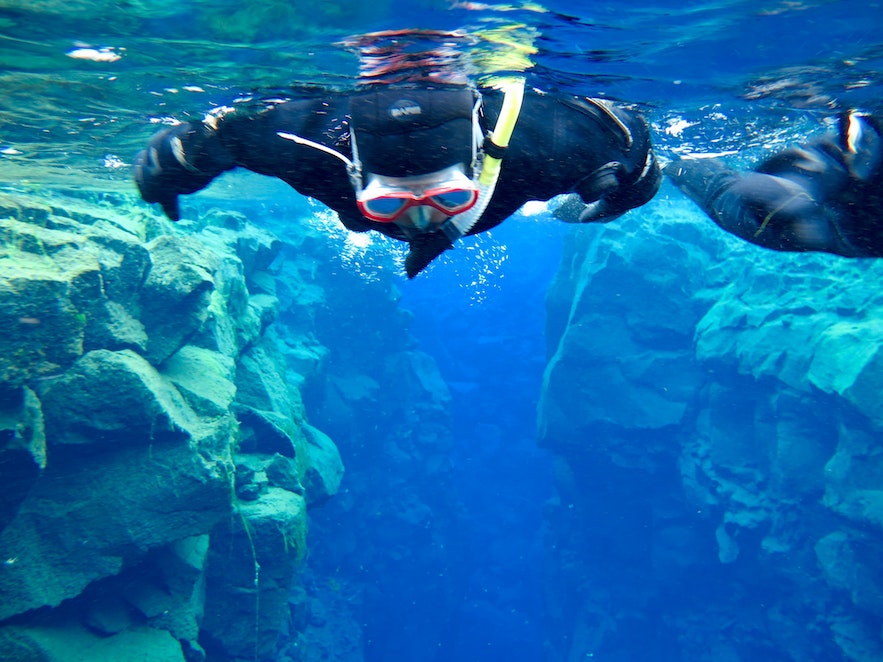 Due to its close proximity to Reykjavik, making your own way there is simple. In fact, hiring a car in Iceland is not only an inexpensive way to see beyond the capital, but it’s a way to experience more of the country’s ever-changing topographies.

Parking around the lake is plentiful and you can even integrate your dive as a fourth stop on the classic Golden Circle Tour as it is just an hour or so away from the Gullfoss region.

If like me you don’t mind getting up close and personal with nature 24/7, then there is an abandoned farm site down by the lake which is now a camp ground. The camp site takes in sweeping views of the lake and, in my opinion, there’s no better way to start the day than with a coffee down by the shore in the crisp morning air. Alternatively, there are a handful of hotels located on the outskirts of the park, however they tend to be on the more expensive side.

So there it is – the ultimate poster child of the dive world. Iceland hasn't always necessarily been synonymous with diving, and in many ways it still isn't, but if you're a keen underwater explorer, you'll know  if you’re looking for bragging rights, this is the one!