Kapelluhraun is a young lava field housing the ruins of a Catholic chapel, situated on the Reykjanes peninsula in Southwest Iceland.

Photo from Wikimedia, Creative Commons, by Reykholt. No edits made.

The lava stretches from port town Hafnarfjörður to Straumsvík cove, surrounding, for example, the Straumsvík Aluminium Smelter. Before Kapelluhraun got its current name, it was known as Nýjahraun or the New Lava Field. Kappelluhraun translates to Chapel Lava Field.

Kapelluhraun is rugged and barren, except that the lava rocks are widely covered with moss. As a lava field, it is relatively young, thought to have flowed around 1100 AC in an eruption of a 25 m (82 ft) long volcanic fissure underneath pillow-lava hills Undirhlíðar. The lava then flowed north of the cove to the sea, forming a spit.

Kapelluhraun classifies as block lava, which is characterised by an uneven surface with stacks of loose slag rocks. Its phenocrysts, which are large crystals of porphyritic rock distinctly separated from the ground, mostly consist of plagioclase, pyroxene and olivine.

The name of the field is due to the ruins of an old chapel found within it. The chapel is situated on a lava mound directly in front of the Aluminium Smelter and is thought to date back to Iceland’s period of Catholic history.

In 1950, a statuette of Saint Barbara was discovered by the chapel ruins. Visitors keen on visiting the location should turn north of Gerði from the highway, where they will find two informational signs, one being from Iceland's National Museum and the other from Hafnarfjörður Museum. The chapel has been partly renovated to showcase how it must have looked like in its heyday.

Besides from the central chapel, other historical ruins stretch across the field, including remains of gardens, pathways, bridges and forts. Although bits of the lava field have been flattened to make way for streets and housing foundations, the parts that house the remains are protected by law. 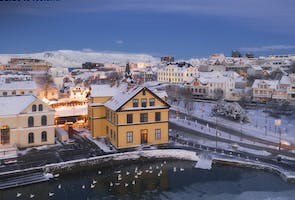