Arnarhóll is a hill, situated on the eastern end of Reykjavík’s Old Harbour, and a district in the capital’s downtown area.

Visit Arnarhóll on a tour of Reykjavik.

Photo from Wikimedia, Creative Commons, by Ziko Van Dijk. No edits made.

As a district, Arnarhóll lies east of streets Lækjargata and Kalkofnsvegur, north of Laugavegur and west of Frakkastígur. The Central Bank of Iceland building is situated north of the hill itself, while east of it lies the Culture House or Safnahúsið.

Today, the hill is often utilised as a live music venue or for screenings of national sports events.

Arnarhóll translates to Arnar’s Hill or Eagle’s Hill and is thought to be named either after the father of Iceland’s first permanent settler, Ingólfur Arnarson, or the eagles that used to inhabit the country in much greater numbers than in today’s age.

According to the Icelandic Book of Settlement, Ingólfur Arnarson threw his high seat pillars into the sea when deciding on where to settle with his family. Four years later, Ingólfur and his men located the pillars and established there the farmstead Reykjavík.

There is no way of knowing the pillars’ exact location, or how much of the story is legend. Some believe the pillars to have landed on what is now Arnarhólsklettur, which is closer to the ocean, while others assume it was the Arnarhóll in question.

In the early 1800s, Danish vagabond Jørgen Jørgensen infamously declared himself King of Iceland and had his fort built on the top of Arnarhóll, manned by drunkards with canons.

No matter the exact location of the pillars, the hill was chosen as the location for sculptor Einar Jónsson’s statue of Ingólfur Arnarson, as a reverence to who is widely considered the founder of this country.

The statue shows Ingólfur standing firm by the mast of his ship, holding a shield and a spear, looking protectively over the city he settled. 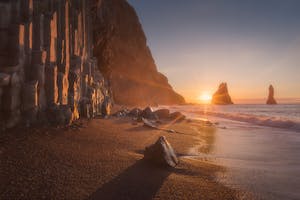 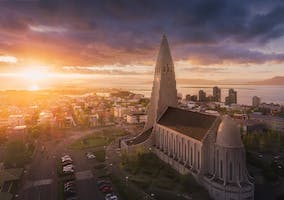