Glacier hiking at Skaftafell in November

Hi all!
Here is the story of the glacier hike I did in November 2018 at Skaftafell with Troll Expeditions.

We arrived there around 14:00 with the small group of 9 people. Our guide took out the equipment: harnesses, helmets, crampons, axes and hiking boots for those who needed them. Suddenly one girl started getting nervous overthinking the whole thing. I guess what influenced her confidence is the huge advertisement on the equipment trailer; it's a picture of a guy hanging from a rope in the midst of a glacier climb.

We tried to assure her this is not what she's going to do. Hiking is basically just walking on ice, but when she put on the harness she became more unsure. To no surprise, the guide was not keen to pressure her into going. Eventually, her and her boyfriend decided to stay behind on the bus (even though he wanted to go, he opted to stay with her). They should remove that ad :-) 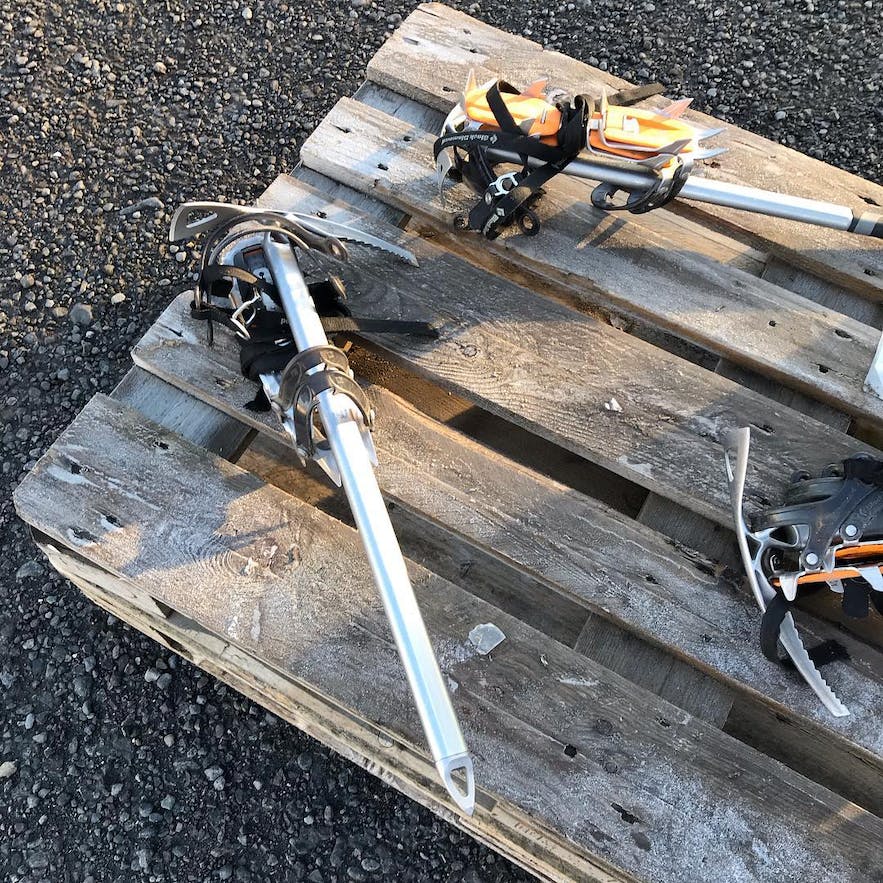 We started walking to the glacier which took approximately 40 minutes. Suddenly the glacier appeared in front of us. We got close to the bridge with the sign "From this point you can only go with the guide" or so, and the bridge was closed by a rope. Smart move as we saw people trying to get there by themselves but were luckily stopped by our guide. 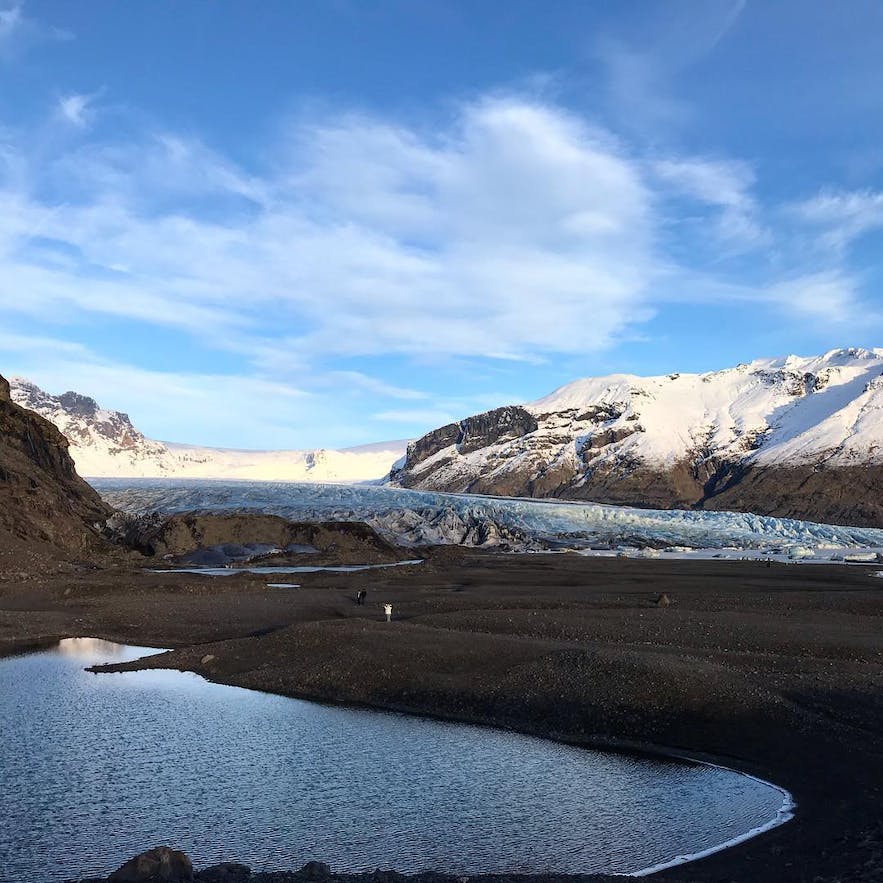 At this point, we put on our crampons (tie them tight!) and listened to the lecture on safety and how to do the hike properly. It basically sums up to the quote from South Park: "Do it right or you gonna have a bad time":

- The axe should only be used as a hiking pole, always hold it properly otherwise if you fall on the sharp side and it stabs your chest, you gonna have a bad time

- Don't try to take photos while walking - you can stumble, fall and have a very bad time

- Step on the ice as hard as you can, don't be afraid to hurt it, just kill the ice.

- You need to choose a walking style: penguin or cowboy - made me think on how cowboys walk like penguins, just with more coolness

The guide ended the lecture by stating "I've been doing this for several decades and I'm still alive" which we found especially encouraging.

First, we went to the ice cave on the foot of the glacier. Friends that have seen my pictures question if they are authentic, I can understand their wonder as the views are seriously out of this world.

There are some cracks in the ceiling where you can see the sky, and the patterns inside the ice form faces and bodies, like ice ghosts, who are stuck there forever. I think the only person who can take the proper photos of those images inside ice is Ragnar Axelsson. On the entrance, there was the sad dirty glove lying on ice left by some other tourist, and I still think I should have picked it up - that place should not have any leftovers from humans. 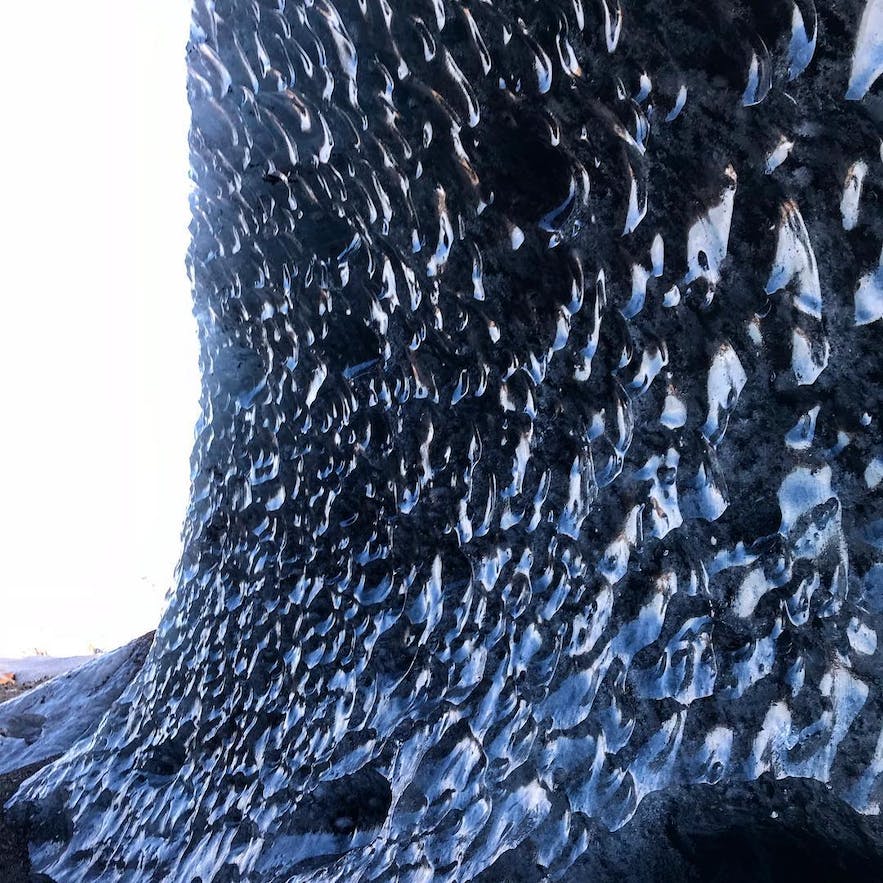 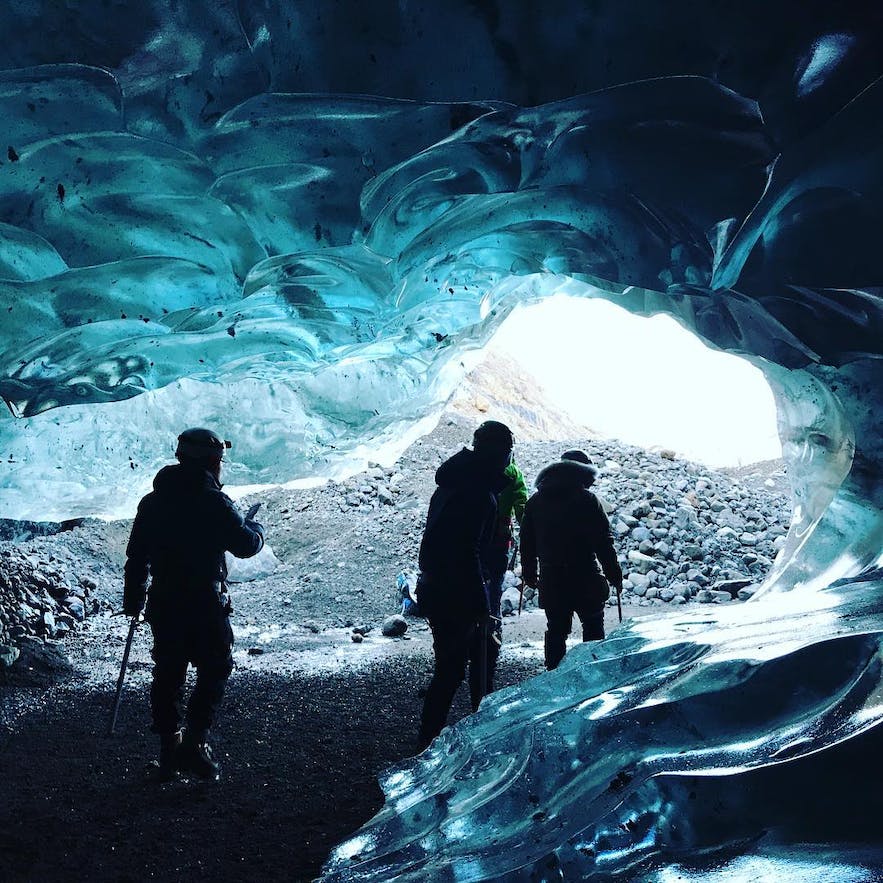 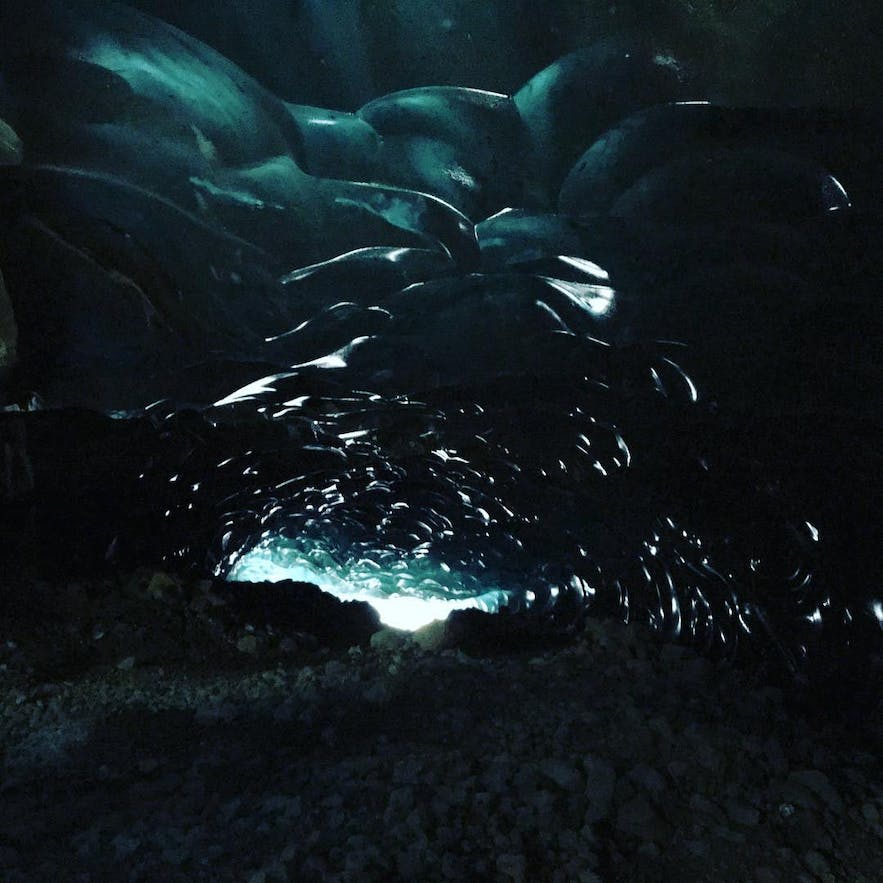 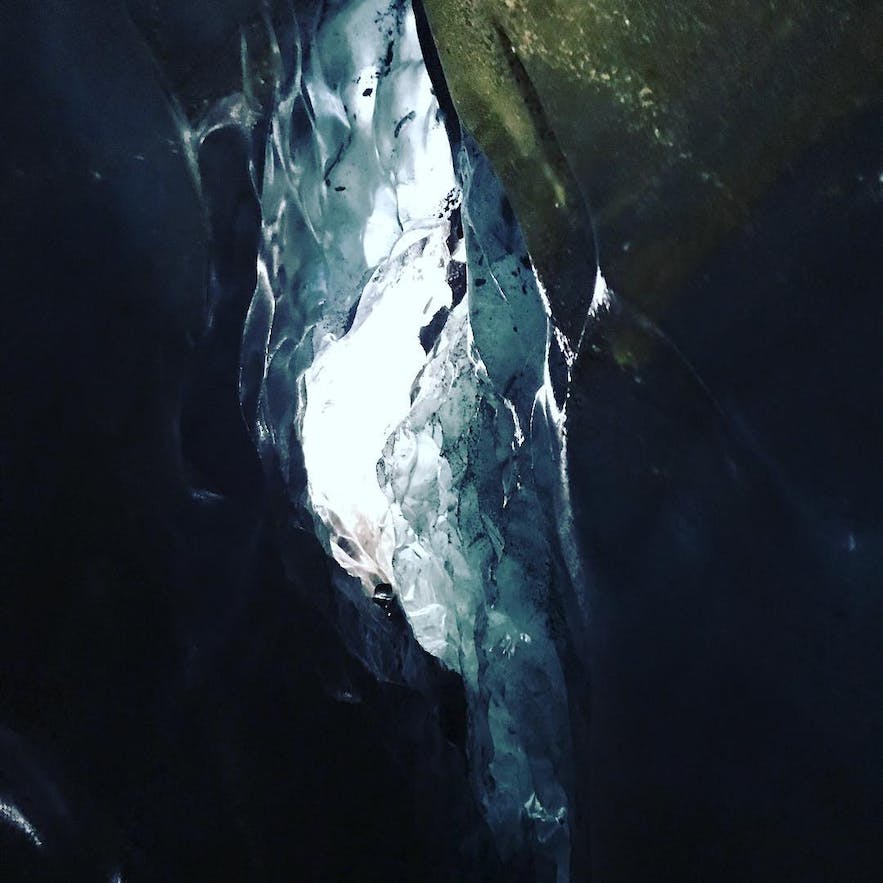 Finally, we stepped on the glacier, walking in one line behind our guide as he knows where it's safe to step on. He never looked back to check how we're doing - I guess no need of that as if the things go wrong he would hear the scream haha. The color, the form, the look under your feet makes you feel stepping on something alive and breathing. Now I could understand why some people were afraid to step hard on it and afraid to "hurt" it. You're walking on the body of a huge sleeping animal and you're afraid to wake it up. 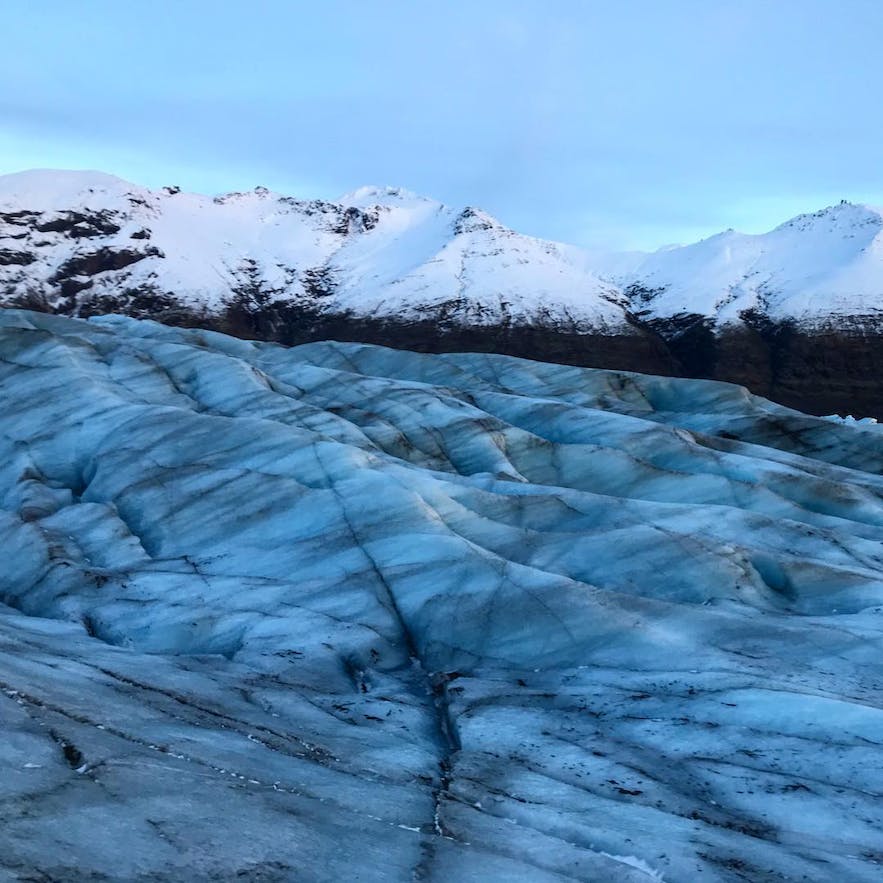 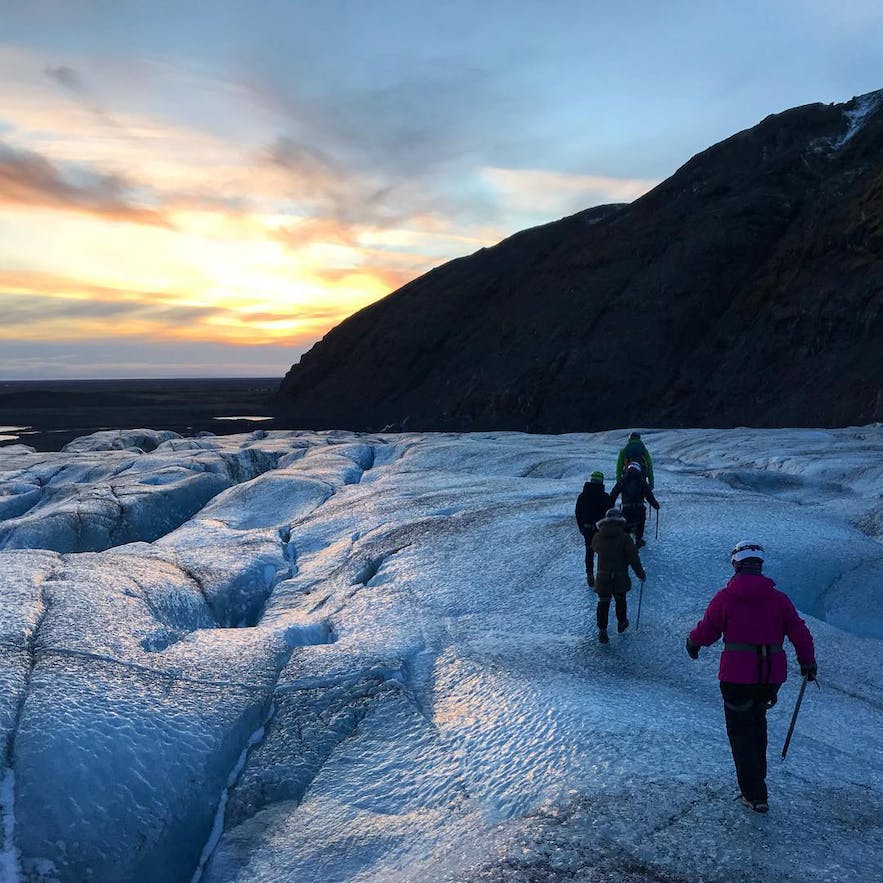 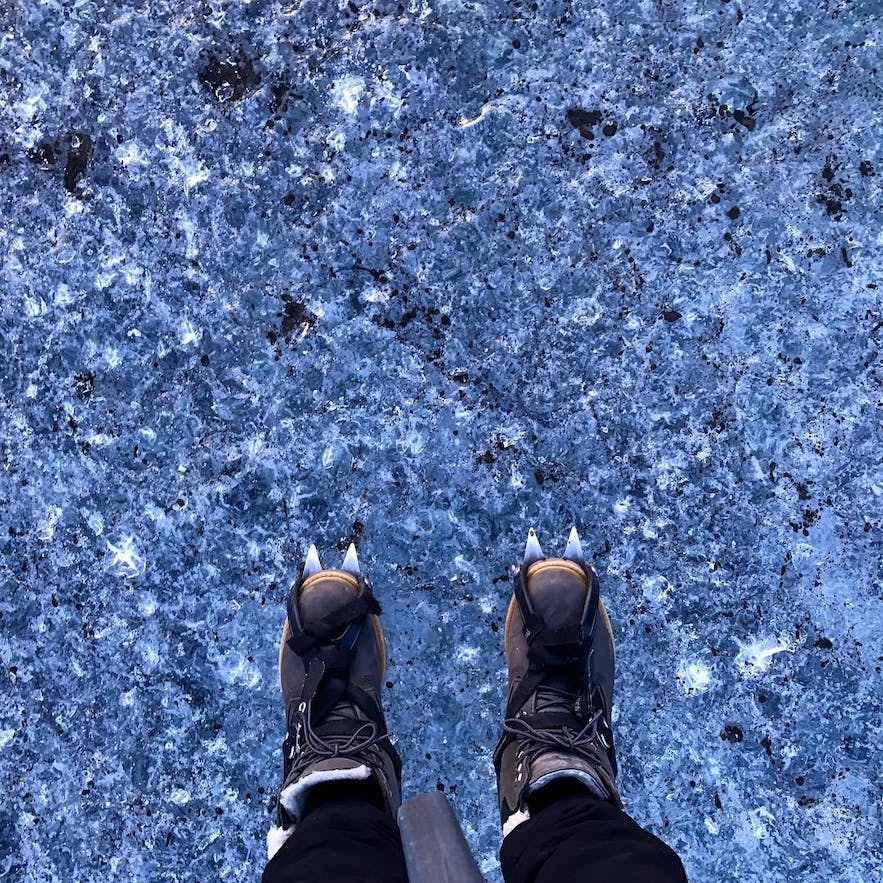 And the crack feeling as I call it. As you walk there, you are passing very deep cracks and you feel how easily you can slide there. That feeling will stay with you for days, especially when you're lying in bed. The bed suddenly cracks open under you, and you fall endlessly. Sweet dreams! 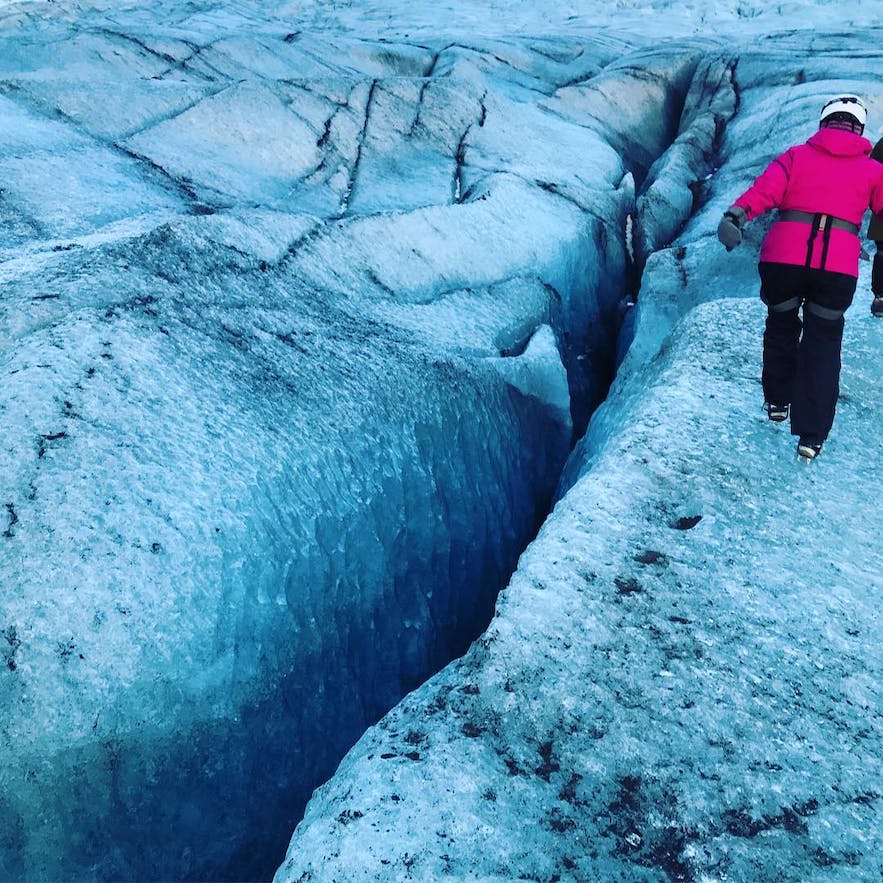 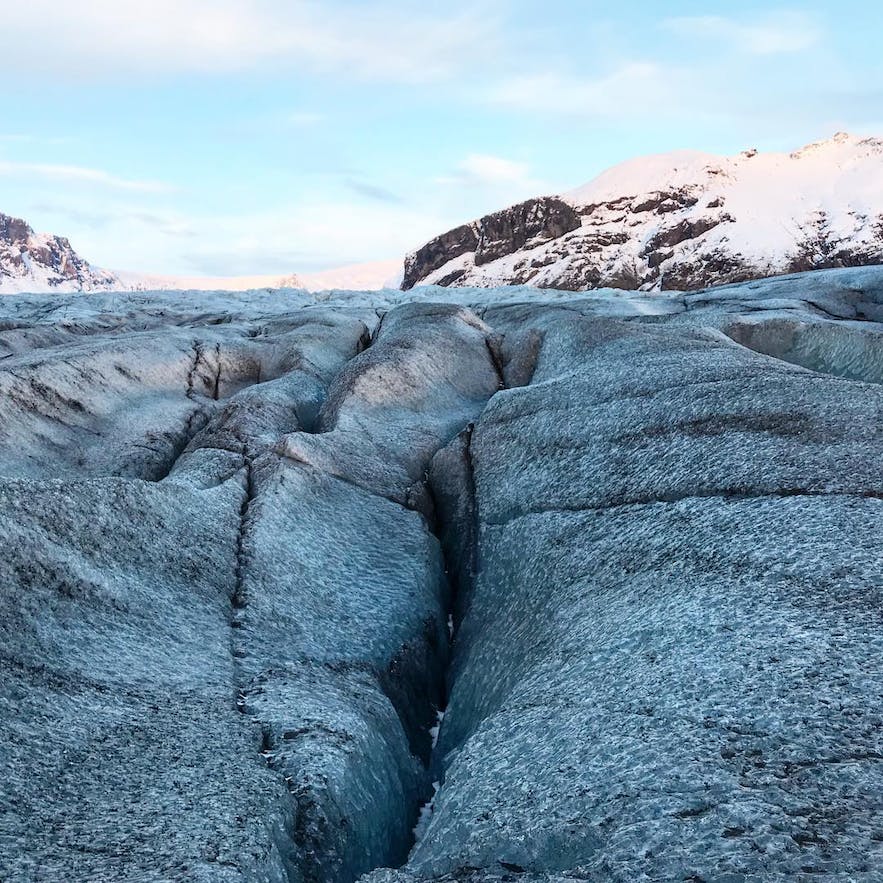 At some point, we stopped and it appeared our turning point, on which the guide showed us how much higher this glacier was just 5 years ago. Global warming speeds the melting dramatically.

Going back during hiking is always the mix of "we are the champions" with "oh no, it ended" thoughts in your brain. But you're so crazy happy and satisfied. If only those axe, crampons and helmet were not getting much heavier on the way back and you were not killing the ground with the cowboy style even when you don't have crampons on your feet anymore.

We were met by the tour company crew, a girl running to our guide with hugs and funny "it's the first time you got them all back!" comment. Just the couple minutes later the sun set down. 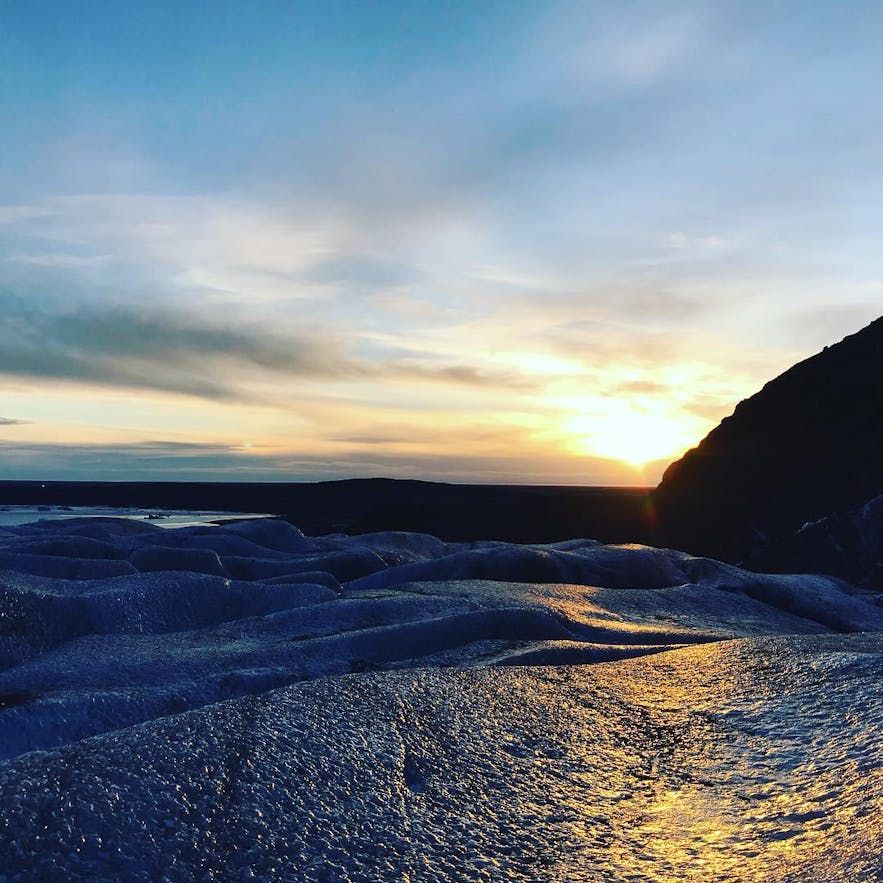 I still have marks from crampon stripes on my boots. Don't want to get rid of them so far :-)