Brave the cold with this amazing 8-day photography workshop capturing some of the best winter highlights that Iceland has to offer; the ice caves and the Aurora Borealis.

This is an amazing chance for photographers, new and experienced alike, to hone their skill under the watchful eye of professional, award-winning guides, as well as for those looking to snap that perfect picture of the elusive Northern Lights.

Iceland is one of the premier photography destinations in the world, a fact only heightened during the dramatic, yet beautiful winter months when the land is covered with a thick blanket of white snow.

Across eight days, you’ll have the chance to experience this wealth of scenery, visiting some of Iceland’s best-loved natural attractions, such as the glacial lagoon, Jökulsárlón, and the Golden Circle sightseeing route.

Don’t hesitate any longer! Hurry now and you too can experience the very best of winter photography in Iceland with this amazing 8-day workshop. Check availability by choosing a date.

Professional photo guide
Transportation in a comfortable vehicle
7 nights in hotels and guesthouses. Rooms with private bathrooms.
All breakfasts on tour, and group dinner on day 1 and 7 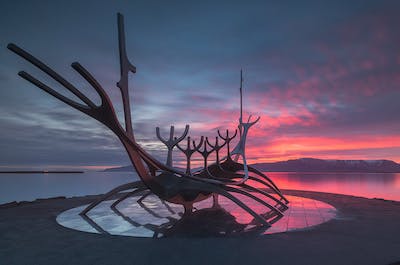 Welcome to the Land of Ice and Fire, and the beginning of your 8-day winter workshop where you'll heighten your skills as a landscape and nature photographer. You will be arriving at Keflavík International Airport, on the Reykjanes Peninsula, from which you will take a bus to Iceland’s capital city, Reykjavík.

Once you arrive, you are free to check in, unpack and unwind until the early evening, at which point you will head down to meet your group and professional photography guides in the lobby. After friendly introductions, your party will head to an acclaimed restaurant in the city where you enjoy some fine cuisine and discuss the seven days of adventure ahead. 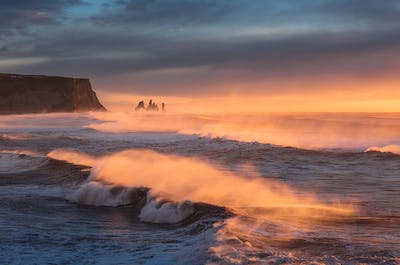 Today, your adventure really begins. You will be picked up from your hotel accommodation in Reykjavík and transported along the picturesque South Coast in a specialized, spacious bus. Almost immediately, you will recognise just why this route is one of Iceland’s most popular sightseeing strips, with its majestic waterfalls, jagged coasts and far-off mountain ranges.

Your first stops will be at the popular waterfalls, Seljalandsfoss and Skógafoss. The former, standing at 63 metres, can be identified by its narrow cascade and accessible cave, allowing for some truly surreal pictures from behind the waterfall itself. Skógafoss is much wider, dropping a fierce water curtain onto the rocks below, causing great swathes of mist that will often compliment your photos with a rainbow.

You will also be paying a visit to Dyrhólaey, a small promontory that offers exquisite and expansive views over the South Coast. This is a fantastic spot to capture just how epic Iceland’s nature is, as well as providing the opportunity to photograph Dyrhólaey’s iconic rock arch.

Next up is the famous black sand beach, Reynisfjara, widely considered to be one of the most beautiful non-tropical beaches in the world. With its jet black, volcanic pebbles, amazing basalt columns and the instantly recognisable Reynisdrangar rock stack, this stretch of shoreline is a dream for any photographer.

You will be spending the night in accommodation in Vík, the small village that sits directly beside Reynisfjara beach. 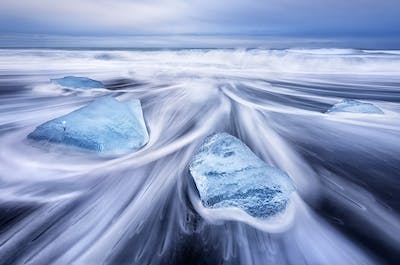 The first part of your day will be focused on capturing this variety of nature within the park; fields of volcanic rock, glacial tongues, black sand deserts and glorious waterfalls.

The second half of your day will be focused on the “Crown Jewel of Iceland”, Jökulsárlón, one of the most picture-perfect locations in the country. Known for its incredible aesthetic qualities, visitors to the lagoon will watch and photograph enormous, glittering icebergs as they float gently on the water’s surface. Keen observers may even have the chance to photograph some of the resident seals who call Jökulsárlón home.

Only five minutes from the lagoon, you will be able to photograph Diamond Beach, a strip of shoreline where icebergs from Jökulsárlón float out to the ocean, or back onto the beach itself. Snapshotting the striking contrasts between the sand, surf and icebergs is sure to create some unforgettable photos.

After your time at Diamond Beach is over, your guide will assess whether conditions are suitable for a Northern Lights shoot back at the lagoon. You will retire for the evening in local accommodation. 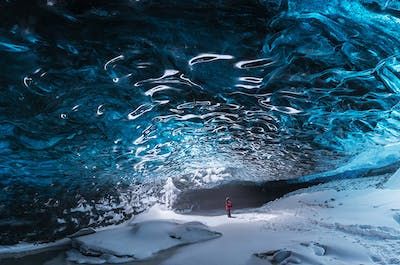 You will be up in early in the morning in order to take part in a sunrise shoot back at Jökulsárlón glacier lagoon and Diamond Beach. The opportunity to photograph this area in the morning light is one that should be relished; both areas take on an ethereal glow that is perfectly suited to making great picture.

Today’s main focus, however, is photographing ice caves beneath Vatnajökull, Europe’s largest glacier. These blue tunnels and caverns make for fantastic pictures, that provide real insight into Iceland’s mesmerising nature. Ice caves are very rare, so this truly is a once-in-a-lifetime moment.

You will spending the evening in accommodation in the Jökulsárlón area. 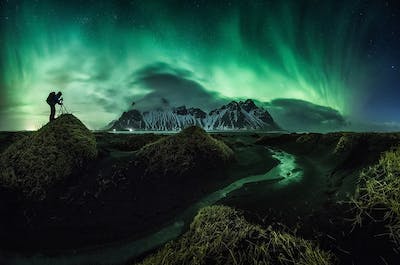 Once again, you will head down to Diamond Beach to take more photographs of the ice, waves and shoreline in the orange morning light.

After your morning shoot is over, you will continue eastward toward the Stokknes Peninsula, home to the famed Vestrahorn. Known as “The Batman Mountain” due to its towering, pointed peaks, Vestrahorn is among the most popular photography destinations in Iceland.

You will spend a solid portion of time making sure that you’ve captured the mountain to the very best of your ability. As the sun begins to set, the mountain will take on a new shade, presenting further opportunities to diversify your portfolio.

Finally, as night overcomes the scene, you will hopefully have the opportunity to photograph Vestrahorn with the Northern Lights as your background. 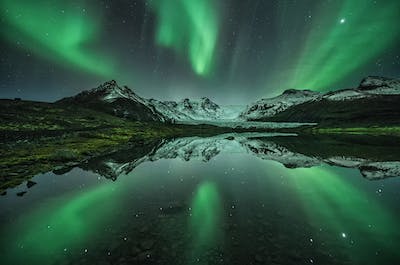 The sixth day of your tour will be focused on Skaftafell Nature Reserve, an area of wild beauty. Skaftafell was once a national park in its own right before it was absorbed by the boundaries of Vatnajökull National Park in 2008.

The majority of the day will be spent photographing different areas of the reserve. Your subject areas will include glacial tongues, cascading rivers and waterfalls, and stunning natural rock formations (and that’s not mentioning the number of incredible panoramas you will be privy to throughout the day).

After your time at the reserve is over, you will begin to make your return journey back along the South Coast, making your final stop of the day back at Reynisfjara black sand beach for a night time shoot. Be it under Northern Lights or starlight, Reynisfjara takes on a haunting, otherworldly ambience, excellent for different photographs. 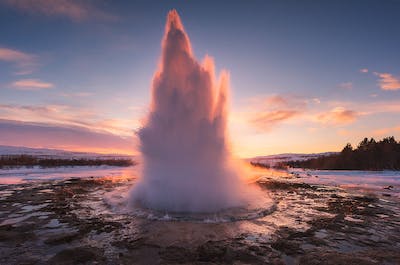 Þingvellir is one of Iceland’s UNESCO World Heritage sites, a title it boasts for a number of reasons. First, it is one of the only places on the planet where it is possible to see both the Eurasian and North American tectonic plates standing exposed from the earth. The second major reason is purely historical; Þingvellir was the original location for the world’s oldest elected parliament, the Aþingi.

Your second stop of the day will be at Haukadalur geothermal valley, an area known for the mighty hot springs Strokkur and Geysir. Whilst Geysir now lies dormant, it is still important in so much as it lent its name to geysers across the world. Strokkur, on the other hand, erupts every five to ten minutes, shooting jets of water up to twenty metres in the air. This means that there is no chance of missing the action shot as Strokkur comes to life.

Your final stop of the day, and the final subject in this photography workshop, is the “Golden Falls”, Gullfoss. Dropping a total of 32 metres over two rocky tiers into a dramatic canyon below, this is one of Iceland’s most beloved waterfalls, proving just how powerful the country’s glacial water can be.

There are a number of different observation points where you can get different angles and perspectives of this incredible feature and with any luck, you will conclude your workshop photographing Northern Lights over this incredible waterfall.

After your time on the Golden Circle route is over, you will head back to the capital city where you're free to enjoy your evening as you see fit. 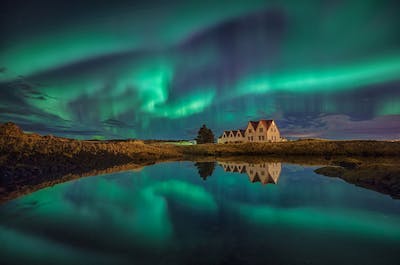 Unfortunately, it is the final day of your photography workshop in Iceland. When it is time to take the bus transfer back to Keflavík International Airport, you can take comfort in the new skills you’ve learnt, as well as the fantastic, recent additions to your photography portfolio.

Icelandic weather is unpredictable and the plan of the tour may change last minute as a result.

The tour is lead by professional photographer/guide