Join this fantastic winter tour combo where you'll be hunting down the Northern Lights across Iceland's most spectacular regions; the national parks of Þingvellir, Vatnajökull, and Snæfellsnes. Not only that, but you will also get to hike one of the country's magnificent glaciers and explore inside another one on a dazzling ice cave trip.

This discount tour bundle is the perfect option for travelers looking to see as many of the country's winter highlights as possible and for those who wish to partake in several exciting activities, all without the hassle of driving or organizing each tour.

You will take in two separate tours over five days, thus ensuring that you maximize your precious time in the country. After first checking out the world-famous Golden Circle route, you will explore the many wonderful attractions along the South Coast over three days.

These include the waterfalls Seljalandsfoss and Skógafoss, black sand beach Reynisfjara, and the crown jewel of Iceland, the Jökulsárlón glacier lagoon. You will also get to hike up Sólheimajökull glacier for a fantastic panoramic view of the surrounding landscape, as well as visit a natural ice cave inside Vatnajökull glacier.

The second part of this tour bundle takes you by minibus to West Iceland, home to many natural and cultural landmarks, and the sublime Snæfellsnes Peninsula, a region forever overlooked by the mighty glacier and volcano Snæfellsjökull. During your excursion, you will see a multitude of waterfalls, volcanoes, glaciers, and geothermal springs, as well as gorgeous stretches of coastline.

The natural splendor of the Snæfellsnes Peninsula is untouched and lacking in light pollution, meaning that if the night sky is clear, you should be able to see the celestial display of the Aurora Borealis. You will finish your tour with a return journey to Reykjavík.

Make the most out of your winter days in Iceland and save a buck while doing so. Check availability by choosing a date. 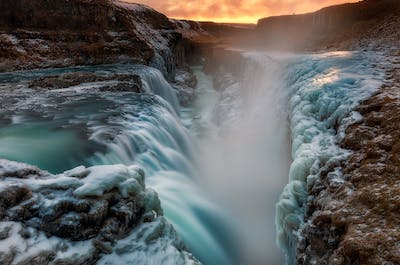 You will be picked up from Reykjavík in the morning and driven to your first destination, Þingvellir. The park is famous for a multitude of reasons. Most importantly, the longest-running, ongoing parliament, the Alþingi, was formed here in 930 AD. The site is also an important spot for geologists and nature enthusiasts; the park is set in the Mid-Atlantic Rift, between the Eurasian and North American tectonic plates.

Your second stop along the Golden Circle will be at Haukadalur geothermal area, a region best known for the geyser, Strokkur. Strokkur is a hot spring that erupts on cue every five to ten minutes, presenting fantastic opportunities for photographers and a deeper understanding of the country’s geological makeup. The neighboring hot spring, Geysir, lent its name to geysers worldwide, though it now lays dormant.

Your final stop will be at one of Iceland’s most popular waterfalls, Gullfoss (“Golden Falls”). Water cascades from the glacial river, Hvítá, pouring 105 feet (32 meters) over two tiers into the dramatic gorge below. It is truly one of the most mesmerizing spots in Iceland.

You will spend your first night of this tour in the Hvolsvöllur area, the perfect location to sit back and keep your eyes fixed on the skies for any sight of the Northern Lights. 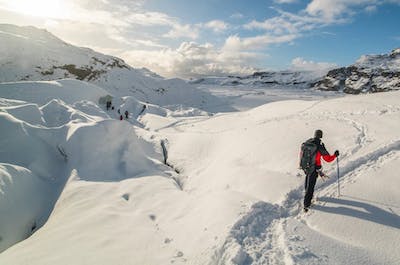 Day 2 - Highlights of the South Coast

Your first stop along the South Coast is Seljalandsfoss waterfall, a 197 feet (60-meter) high feature which, if conditions allow, can be walked all the way around, presenting an excellent opportunity to see the water and surrounding landscape up close.

You will next head a short distance to the second waterfall of the day, Skógafoss. Skógafoss is much wider than Seljalandsfoss, though the same height. While driving between these two waterfalls, you will also likely spot the subglacial volcano, Eyjafjallajökull.

Next up is a spot of adventure. You will pull up to the Sólheimajökull glacier tongue, where your experienced guide will provide you with safety information and all of the necessary equipment for some ice hiking.

Following that, you will begin your hike, passing fantastic and intricate ice sculptures and the pale-blue crevasses of the ice cap. The higher you climb, the more beautiful the surrounding panoramas.

Next, you will visit the black sand beach Reynisfjara, famous for its fascinating basalt column cliffs and strangely shaped rock formations that rise out of the ocean. You will make a passing visit to the small fishing village of Vík before continuing to Skaftafell Nature Reserve, which is only a small section of the gorgeous Vatnajökull National Park.

Your final stop of the day will be the crown jewel of Iceland, the Jökulsárlón glacier lagoon. Here, visitors can watch as enormous icebergs drift peacefully on the lagoon’s surface, slowly making their way out toward the Atlantic Ocean. You can follow this journey yourself by strolling a short distance from the lagoon to the Diamond Beach, where the icebergs wash up on the black sand, creating fabulous photo opportunities.

You will spend your second night in the Jökulsárlón area. 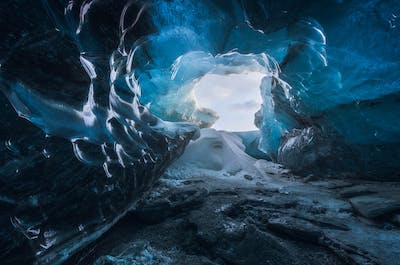 Your third day will see you exploring the inner depths of Vatnajökull glacier; today is your chance to visit one of Iceland’s famous ice caves.

Your guide for the day will provide you with all of the necessary equipment, including helmets and crampons, before leading you into the bejeweled and subterranean world of the Vatnajökull ice cap. Prepare to be amazed by the dazzling blues of the ice, as well as the naturally formed ice sculptures that decorate the glacier’s interior.

After visiting the ice cave, you will return to the minibus for your return journey back to Reykjavík. Your tour guide will eagerly point out any of the sights and attractions missed on the first day.

When you arrive back in Reykjavík, the evening is free to spend as you please; you could discover the city’s exciting nightlife, check out the cultural landmarks such as the church, Hallgrímskirkja, or Harpa Concert Hall, or even visit one of Reykjavik’s pools. 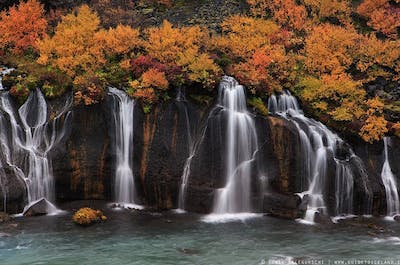 Day four is the beginning of the second part of your journey. You'llYou'll head towards the sublime Snæfellsnes Peninsula, home to Snæfellsjökull National Park, one of the country's most beloved regions. First, however, you will enjoy the many sites of west Iceland.

After being picked up from your accommodation in Reykjavík, you will be driven by a minibus around the beautiful Hvalfjörður, a fjord known for its tall mountain peaks and dazzling waterfalls. En route, you'll pass the dramatic flat-topped Mount Esjan, which overlooks the capital.

However, your first stop will be at one of the main highlights of the region, Deildartunguhver. It is the highest flowing hot spring in Europe and a beautiful example of Iceland's powerful volcanic forces. You will then visit the historical village of Reykholt, once home to the medieval writer Snorri Sturluson, most famous for his early writing, ''Prose Edda''. This work is considered the Bible of Old Norse mythology.

Close to Reykholt are two starkly different but equally impressive waterfalls. Barnafoss is violent and narrow, cascading dramatically into a rocky gorge below, while Hraunfossar is a far more peaceful series of smaller falls trickling gently over the rocks.

After enjoying all of these sites, you'll retire to your accommodation nearby, ready to explore Snæfellsnes tomorrow. 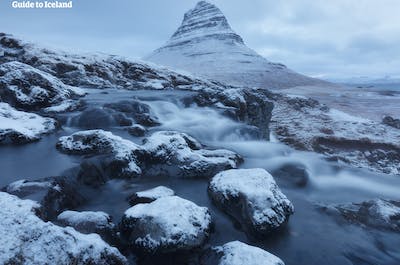 Your final day of this tour will be spent further exploring the many highlights of the Snæfellsnes Peninsula. While you travel up and down both sides of the peninsula, the Snæfellsjökull sub-glacial volcano will be omnipresent throughout your trip, towering over the surrounding lava plateaus and volcanic hills.

Your first stop of the day will be at Gerðuberg, a set of beautifully formed hexagonal basalt columns that line a cliff; such features are rarely found around the world. Next, you'll head to Ytri-Tunga beach, one of the most reliable locations for seal-watching in the country; they can regularly be seen hauling out on the rocks or playing in the water just off-shore.

Following Ytri-Tunga, you will head to the picturesque villages of Arnarstapi and Hellnar. The coastline around these settlements is beautiful, with powerful waves crashing upon incredible rock formations, the most notable of which is the arch of Gatklettur.

You will then have a chance to admire the black sand beach Djúpalónssandur where you can try your hand at 'the lifting stones', a centuries-old test of strength and suitability for a life at sea for the local fishermen.

After your time at Djúpalónssandur, you will next head to 7000-year-old Vatnshellir, one of the most accessible caves in Iceland. Once you have descended into this subterranean world, you will be dazzled by the strange rock formations and colorful lava features.

At the northern point of the peninsula, you will stop at the most photogenic mountain in Iceland, Kirkjufell mountain. The mountain's nearby waterfall makes the entire surrounding area a truly stunning place to visit and will likely be one of the highlights of your trip along the peninsula. Game of Thrones fans will recognize it as the 'mountain shaped like an arrowhead' featured in Season Seven.

After Kirkjufell, you will begin to make your return journey to Reykjavík, but not without first passing two more beautiful fjords, Hraunsfjörður and Kolgrafafjörður.

Spend the evening exploring Reykjavík! It is not recommended you plan to fly home on the last day of this bundle tour as bad weather or delays could affect your journey.

The Northern Lights are a natural phenomenon, and therefore cannot be guaranteed, but this itinerary is designed to maximize your chances to see them if the weather allows. Please be advised that there is no specific Northern Lights hunt on this tour, but your guide will notify you if the conditions are favorable and advise you on how to best spot them

For your convenience, it is recommended that you pack lightly for the overnight tours and repack to a smaller suitcase or backpack before your journey.

It is highly recommended that you do not book your flight home on the final day of the tour as bad weather or delays could affect your journey. Please be sure to arrange accommodation for this evening and an airport transfer the next day to take you to Keflavík International Airport for your departure.