Explore Hornvík and Hornstrandir, untouched parts of the Westfjords, on this immersive two-day tour. This trip is perfect for those who love stunning nature and bountiful wildlife.

You meet your guide and groups at Ísafjörður, where a boat is waiting to take you over to the Hornstrandir Nature Reserve. This is the remotest part of Iceland, having been deserted in the past centuries as the country industrialised. As such, nature has reclaimed it, and it is now home to a wealth of arctic flora and fauna.

The most notable animal is the Arctic Fox; in this region, they have very little fear of people, making it a perfect destination for wildlife photographers. You will also, however, see a huge wealth of seabirds around Hornvík, and are very likely to spot seals on the beach. On your speedboat trips, or just looking out to sea, you might even spot whales and dolphins.

For the night you spend here, you'll be camping in comfortable tents with sleeping bags provided on Hornvík beach. This camping destination is no doubt the best in Iceland, there are few things as inspiring as falling asleep beneath the midnight sun and waking up in such a spectacular location.

Hop aboard, for two days of adventure and spectacular landscapes. Check availability by choosing a date. 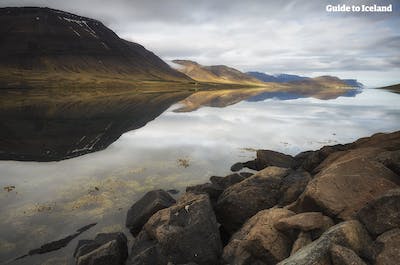 You will board a boat at 9:00 am on the morning of day one, and set out for the fjord of Veiðileysufjörður in the Hornstrandir Nature Reserve, in the northernmost part of the Westfjords. After you land, you will hike up the valley to Hafnarskarð Pass, which even in summer, is often still covered in snow. The overall ascent is approximately 500 metres, but the path is not particularly steep until the end.

The views from the pass over Hornvík Bay are spectacular. After enjoying the view and taking some photos from this vantage point, you will descend down the path and all the way down to the shoreline.

There, a nice camp setup will be waiting for you with a tent and sleeping bag provided, and your guide will cook you up a delicious meal. There is time to take a short walk along the beautiful black sand beach and hopefully enjoy the midnight sun that sets in the ocean right in front of the camp. 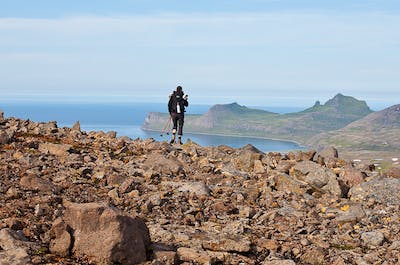 Today, after a hearty breakfast, you will have a better look at the spectacular wildlife of Hornstrandir. To do so, you will trek up to the Hornbjarg bird cliffs, which tower 500 metres over the crashing waves below. A wealth of avian species can be found here, the most common species being kittiwakes, fulmars, razorbills and guillemots.

These huge bird cliffs are haven for the Arctic foxes in summer, as their favourite meal - birds and eggs - is readily available and easy to access. You have a great chance of spotting them scuttling along the cliff edges, dark summer fur standing out against the greenery and wildflowers.

After making the most of the wildlife, and getting as close to the edge of the cliff as you dare, you will descend to the beach once more. Your boat will be waiting here to pick you up. As you embark on the two- to three-hour journey back to Ísafjörður, keep your eyes on the seas; in these arctic waters, you never know when a whale or dolphin may surface. Over twenty species are occasional visitors, the most common are humpback whales.

Even if none appear, however, this journey is spectacular; you will get to see the whole coastline of the Hornstrandir Nature Reserve before reaching Ísafjörður between 3 to 4 pm.