Landscape photographers from all over the world recognize Iceland for nature beauty and diversity. North Iceland is no different from the rest of Iceland and will not be as crowded as some of the most famous locations in the south part. In the north near the Arctic you will find many unique locations such as grand waterfalls, actually some of the biggest in Europe the beautiful lake Mývatn and a unique geothermal area. The number one waterfall of them all is the most powerful waterfall in Europe, Dettifoss. It is in the Jökulsá river which runs through Jökulsárgljúfur canyon, created over thousands of years by the glacial river Jökulsá á Fjöllum. Dettifoss is a part of the Vatnajökull National Park. Other beautiful waterfalls in North Iceland are Selfoss which is close to Dettifoss, Goðafoss that you can see from road number one, Aldeyjarfoss on the edge of the highlands and Kolugilsfoss, a hidden gem near the ring road. These waterfalls are all included in the workshop’s itinerary.

Around lake Mývatn you will find highly diverse birdlife in the summer, waders and some unique duck species can be found there. A beautiful river, Laxá flows out of the lake, and along with the Mývatn lake it is protected as a nature reserve. On the east side of the lake at Námafjall we visit colorful geothermal area with mud-pots, steaming fumaroles and colorful mud.

The Hvítserkur Sea-stack is a unique rock formation described as a pre-historic creature or dinosaur which has turned to stone on the beach, truly a special place to visit and photograph in the Midnight sun. Further north on the Skagi peninsula the Basalt columns at Kálfshamarsvík are unique geological formations, created about 2 million years ago and interesting to photograph with a lighthouse as a backdrop. This tour is set in the middle of summer, so the Midnight sun plays an important role in the whole experience, as the sun does not go under the horizon for a couple of weeks in the middle of summer.

Pick up and drop off at your hotel or a chosen Bus-stop in the Reykjavik area. On the workshop I will offer photography assistance, tutoring and guidance, both still photos and video. Transport in a Mini-van or a 4x4 truck. Accommodation in good hotels near the most famous locations in North Iceland.

This workshop is co-hosted by Arjan Wilmsen, an adventurous landscape and outdoors photographer with an insane passion for Scandinavia and the Nordic countries based in the south east of The Netherlands. He has co-hosted a few of the Landscape Photography Iceland workshops in the last couple of years. 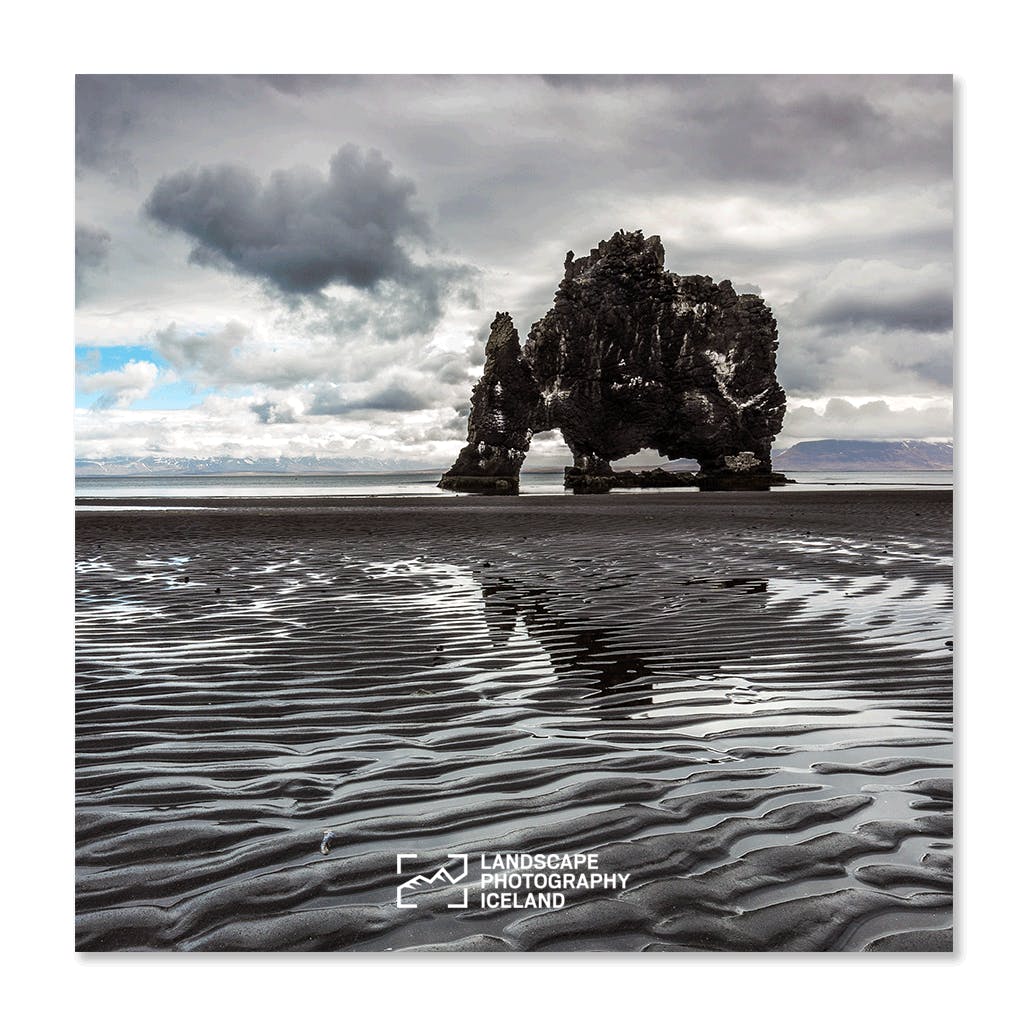 Pick up in Reykjavik around 8-9 am, heading north through Hvalfjörður and Borgarfjörður into the north with a few photography stops on the way. One of the first photography locations on this tour is Hvítserkur sea stack, a rock on the beach that looks like a creature from the past. Kolugil waterfall is another great stop on this tour. It is an impressive setting bit out of the ring road. We are staying over night near the town of Blönduós.
Read more
Day 2 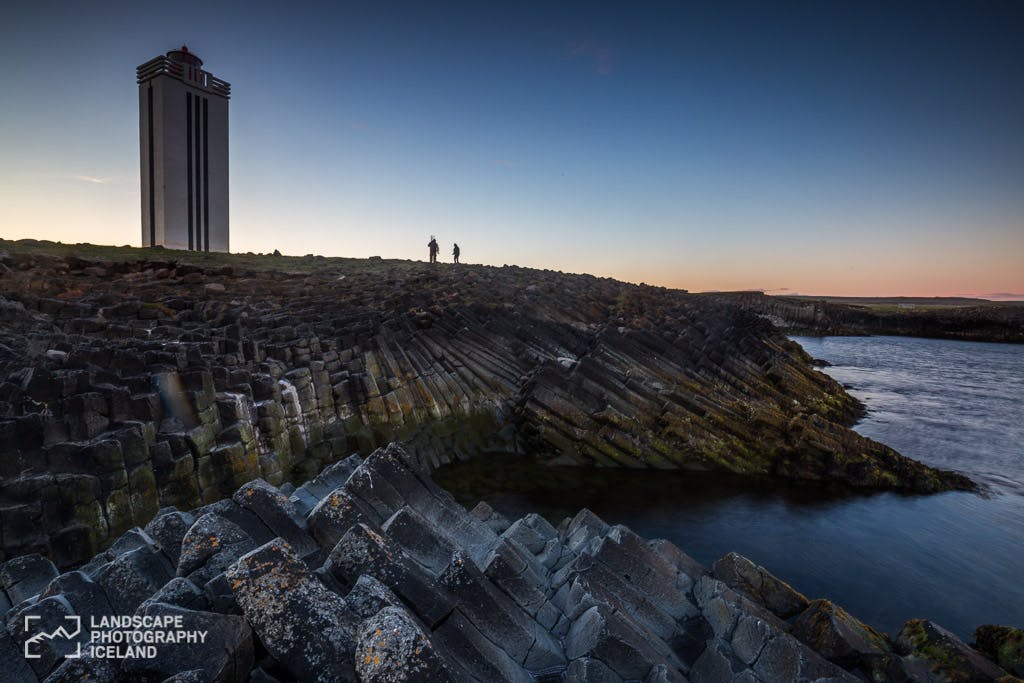 Heading further north along the Arctic Coast Way to Akureyri. On the photo to the left you see the Kálfshamarsvík lighthouse with beautiful basalt columns in the sea cliffs around it. Driving around Tröllaskagi peninsula, a mountainous outcrop reaching far north to the towns of Siglufjörður and Ólafsfjörður. A couple of long tunnels through the mountains connect the two towns. Staying over night in Akureyri.
Read more
Day 3 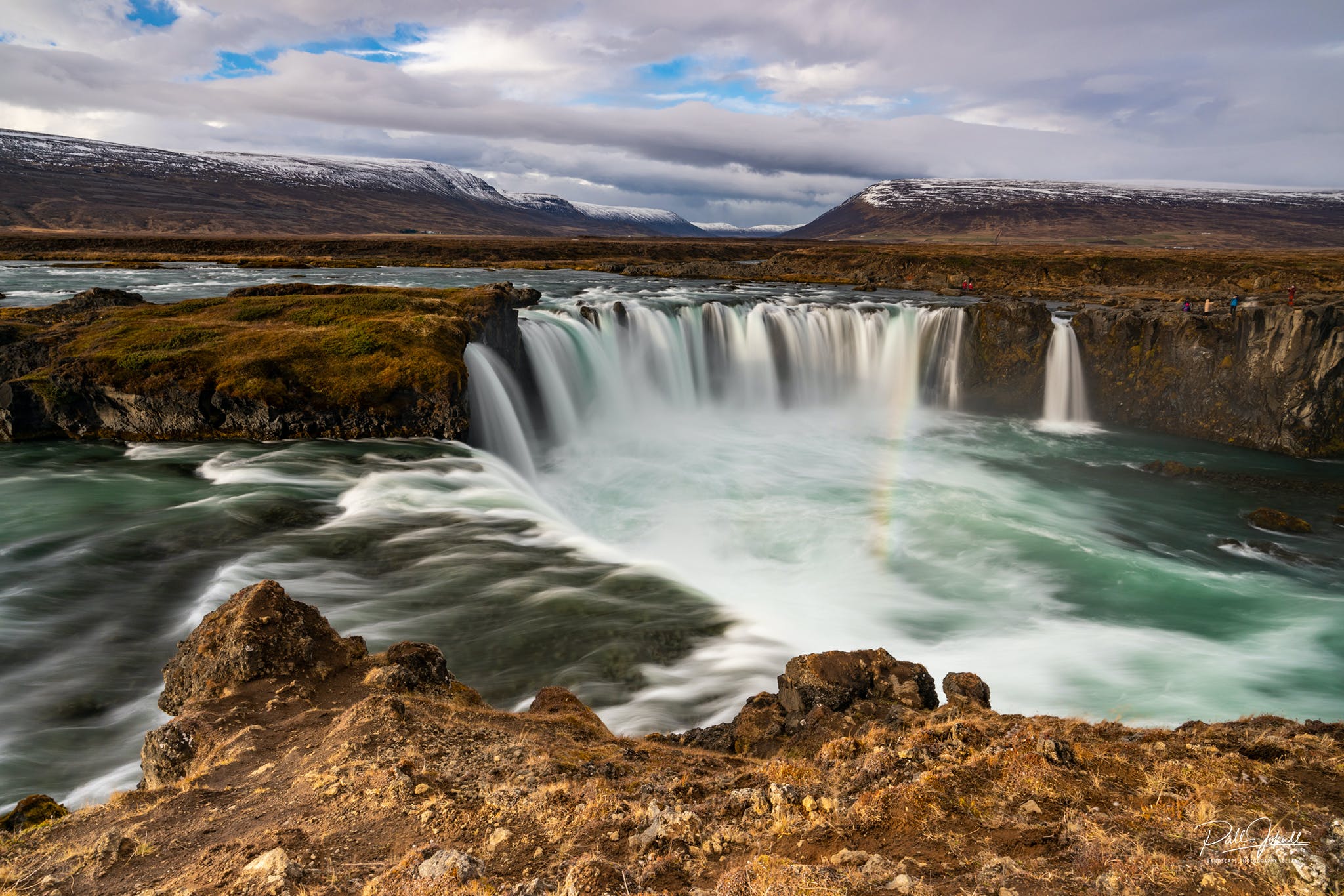 Starting with a morning session at Goðafoss waterfall which you see here on the photo on the left. It is a great location offering various angles and possibilities for long exposures and details. Exploring the Mývatn area with Hverfjall mountain and Hverir geothermal area visiting Dettifoss waterfall, the most powerful waterfall in Europe. Near Dettifoss in the same river is another waterfall, Selfoss which is well worth the extra 30 minutes hike. Staying in the Mývatn area for a couple of nights.
Read more
Day 4 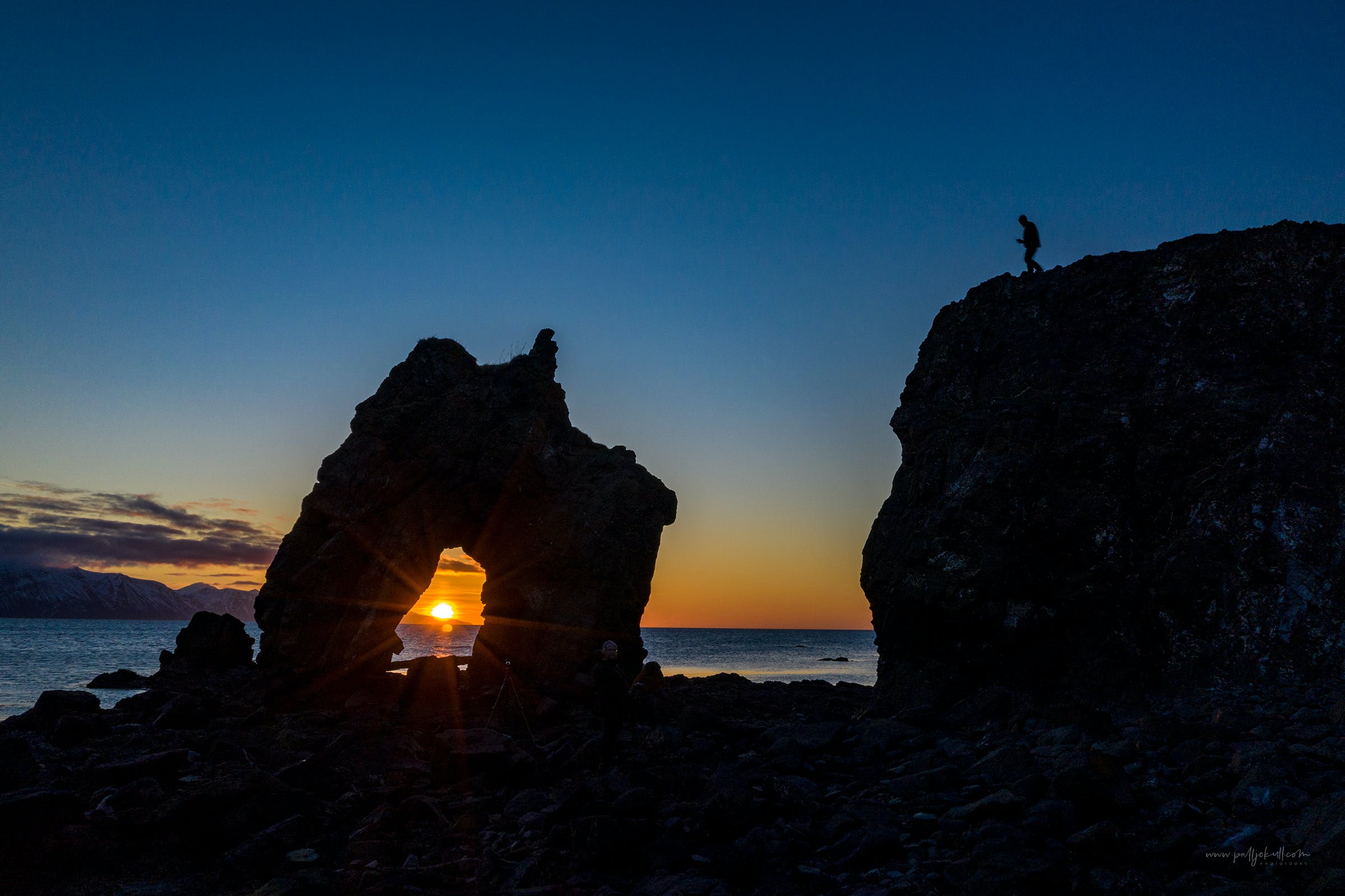 Taking the Diamond Circle route along the coast from Húsavík to Raufarhöfn with many beautiful photography stops on the way. One of them is the sea stack on the left, Bakkastakkur and the beautiful coastline of Tjörnes north of Húsavík. On Melrakkaslétta in the north east you get closest to the Arctic circle and in the village of Raufarhöfn you will find the Arctic henge monument. The Ásbyrgi canyon and Jökulsárgljúfur canyon, Dettifoss waterfall and a couple of other waterfalls are within the Vatnajökull National Park.
Read more
Day 5 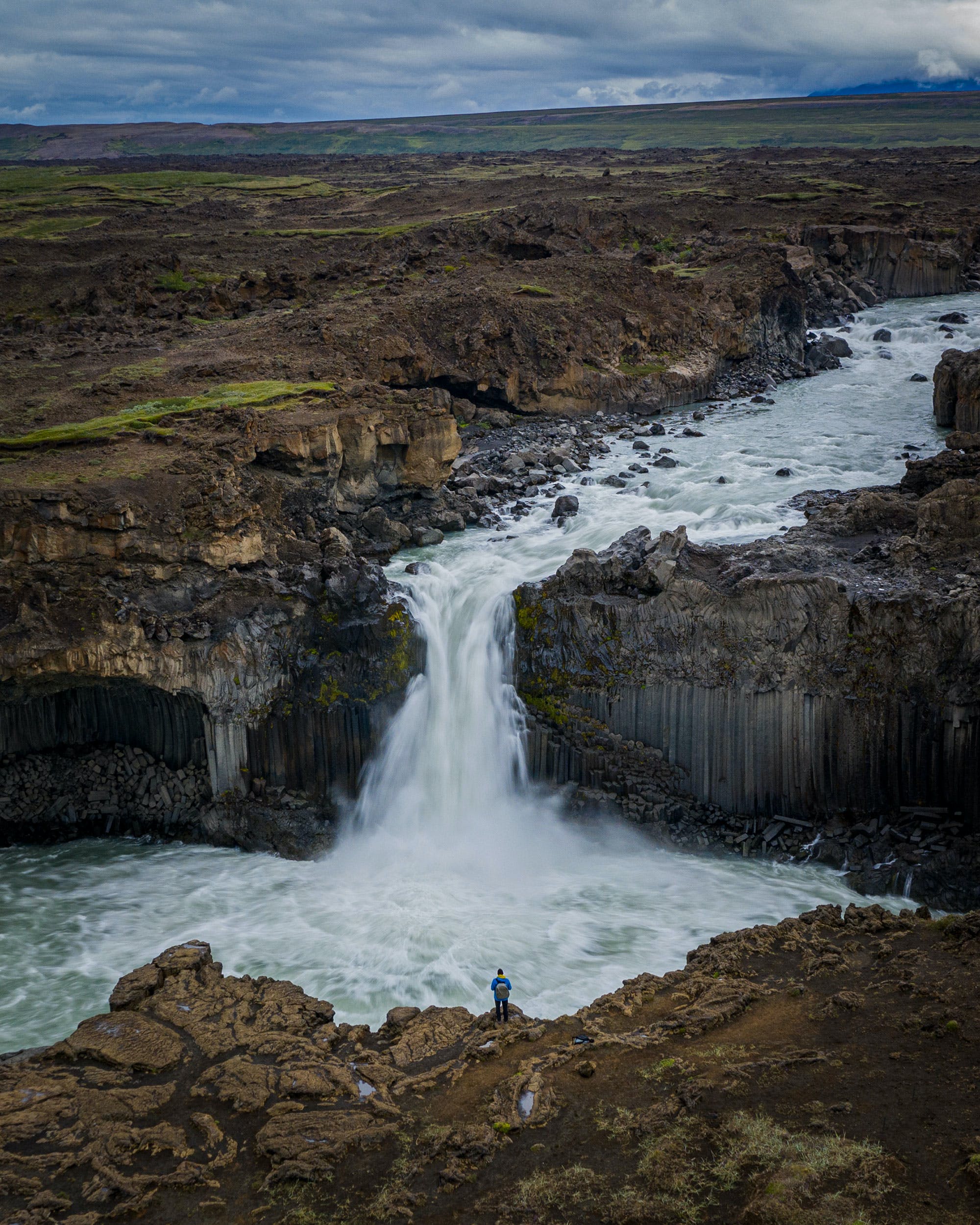 Morning photo session at Goðafoss and Aldeyjarfoss, two great waterfalls in the Skjálfandafljót river. The Aldeyjarfoss watefall is on the edge of the highlands by the F-road over Sprengisandur, a 4WD track across rivers and rough terrain. Aldeyjarfoss is one of the most picturesque waterfalls in the north and Hrafnabjargafoss is in the same river a few kilometers further inland. Heading to Akureyri and through Skagafjörður, staying near the town of Blönduós for the night.
Read more
Day 6 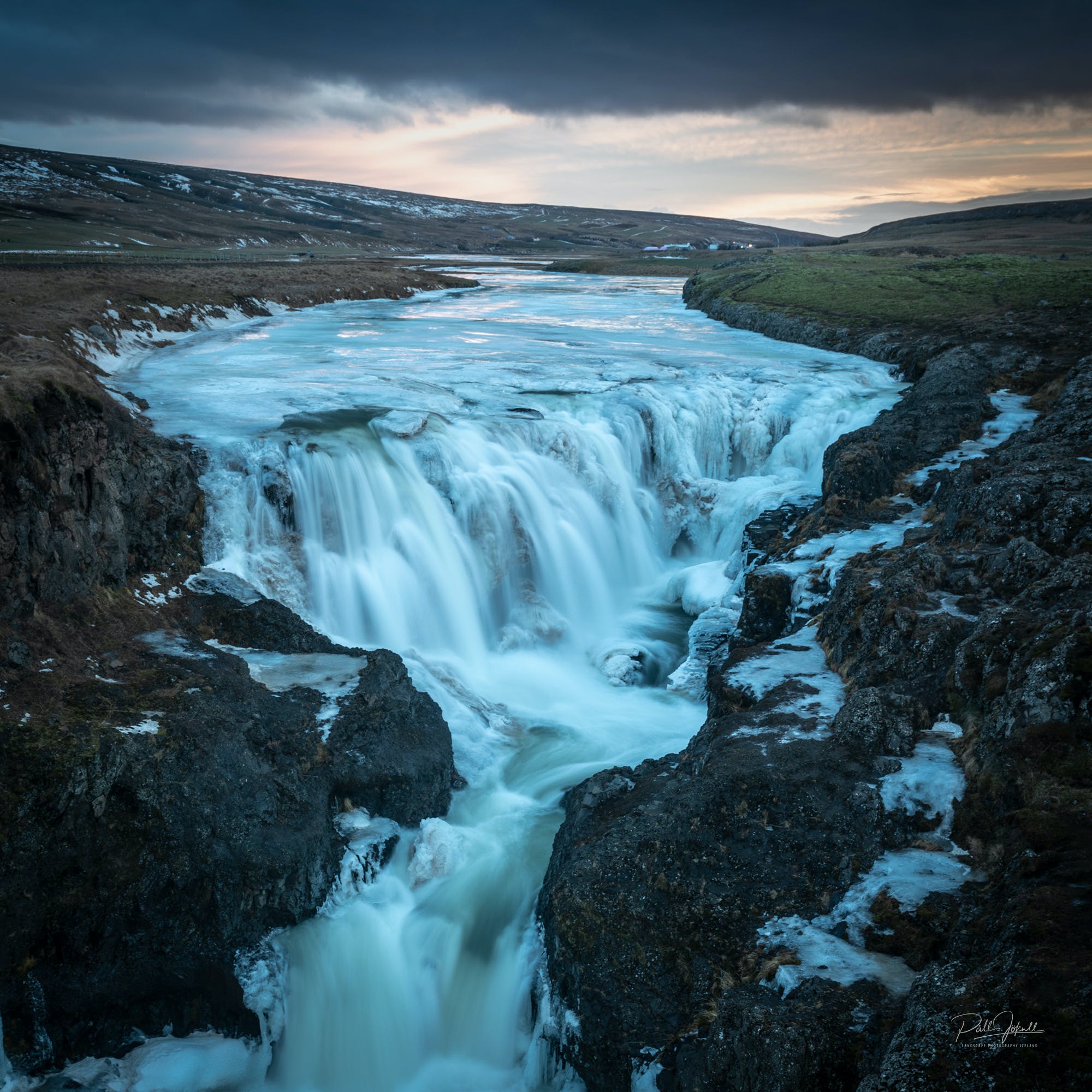 Early morning we start with a sunrise photo shoot at Kolufoss waterfall and Hvítserkur sea stack following the coast of the Vatnsnes peninsula where you might be able to photograph some seals on the coast. Heading onward south to Borgarfjörður with a photography stop at Hraunfossar waterfall and Barnafoss waterfall, two great and unique waterfalls in beautiful surrounding. After that we head back to Reykjavik and plan to be there around 6-7 pm.
Read more

Clothing according to season and weather, good hiking boots
Your camera gear and a sturdy tripod

This is a Photography workshop, so it is good to bring your laptop and an external hard drive for backing up your photos and videos.