Krýsuvík is a geothermal area, located on the Reykjanes Peninsula in Southwest Iceland.

The Krýsuvík Geothermal Area is defined by mud pots, hot springs and steaming vents, as well as the multi-coloured mineral deposits that stain the earth. The reason for so much geothermal activity here is because of Iceland’s tectonic plates.

The Mid-Atlantic Rift runs all the way through Iceland; the western part of the country, including Reykjavík, the Snӕfellsnes Peninsula and the Westfjords, are all on the North American tectonic plate, while the east, including the East Fjords and Vatnajökull National Park, are on the Eurasian plate.

This rift runs right across the Reykjanes Peninsula, and has dramatic consequences on the landscapes. As these plates pull apart, magma is brought close to the surface of the earth, causing groundwater to boil and create geothermal areas.

Krýsuvík, in fact, is not the only geothermal area on the peninsula; there is another called Gunnuhver, and a hot spring beneath the lake of Kleifarvatn.

These plates pulling apart make the Reykjanes Peninsula susceptible to earthquakes; it is also lined with cone-shaped volcanoes, and coated in lava rock, revealing a long volcanic history.

What makes Krýsuvík most unique as a geothermal area is that it has been excellently prepared for visitors.

Walkways take you safely across the uneven earth to the different features of the area, and there are many signs that have been erected to explain the geothermal and geological forces at work.

There is also a carpark right beside Krýsuvík for the convenience of drivers.

As the geothermal area is right in the middle of the Reykjanes Peninsula, it is recommended to visit it alongside other sites.

These include Brimketill, an oceanside ‘pool’ that was once said to be the bathing place of a troll; the bird-watching cliffs of Krýsuvíkurbjarg; the aforementioned lake Kleifarvatn; and the ‘Bridge between the Continents’. 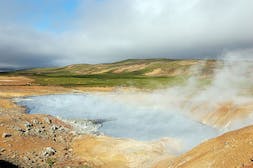 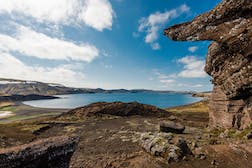 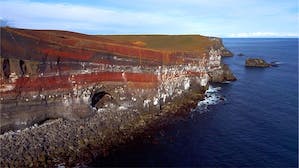 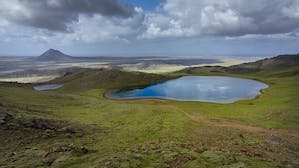