Halloween was never really celebrated in Iceland when I was growing up. For costumes and candy, we had Ash Wednesday, where kids would dress up and sing in stores for treats. However, Ash Wednesday missed all that is fun about Halloween, mainly the horror!

Today, Halloween is gaining some momentum. Ghosts and ghouls took over the streets of Reykjavík both in the form of children on the 31st and in the form of drunken adults on the previous weekend. Various Halloween events were held throughout the city in the preceding days, everything from live concerts to drag shows. 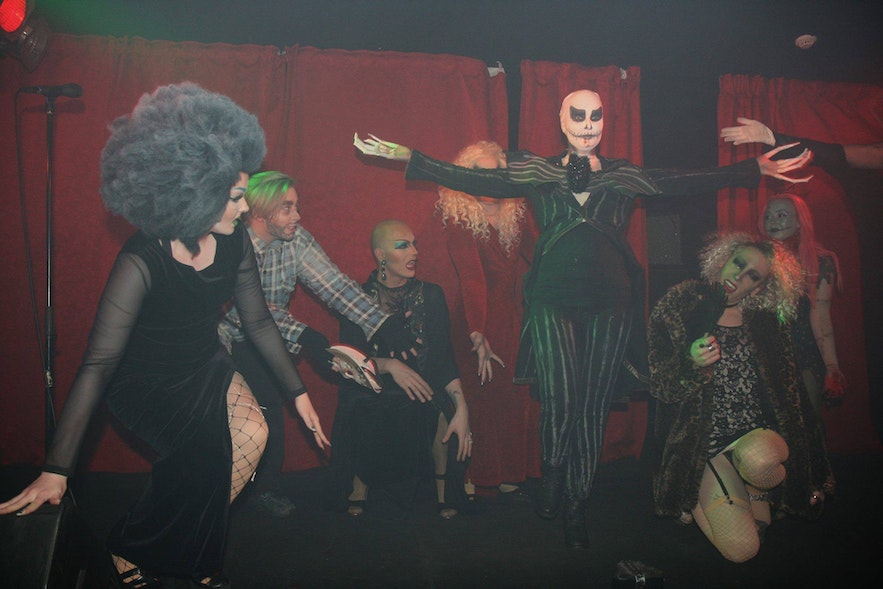 But now it is November and a whole year until the next Halloween. However, all is not lost for those of us who still crave some horror-related fun because Frostbiter: Icelandic horror film festival, starts November 10th.

Make your way to the western town of Akranes for three-full days of horror, gore, ghosts, and monsters. Events will be held throughout the town, in the local movie theatre, the town’s quirky café/museum, and in an abandoned factory (how creepy is that?!).

The opening gathering is held in Bíó Höllin movie theatre at 19:00 on Friday, November 10th. Following that is a full schedule of both Icelandic and international horror shorts, Q & A with directors and actors, feature-length movies, pub quiz, and parties. And the best part? Admission to all events is free! 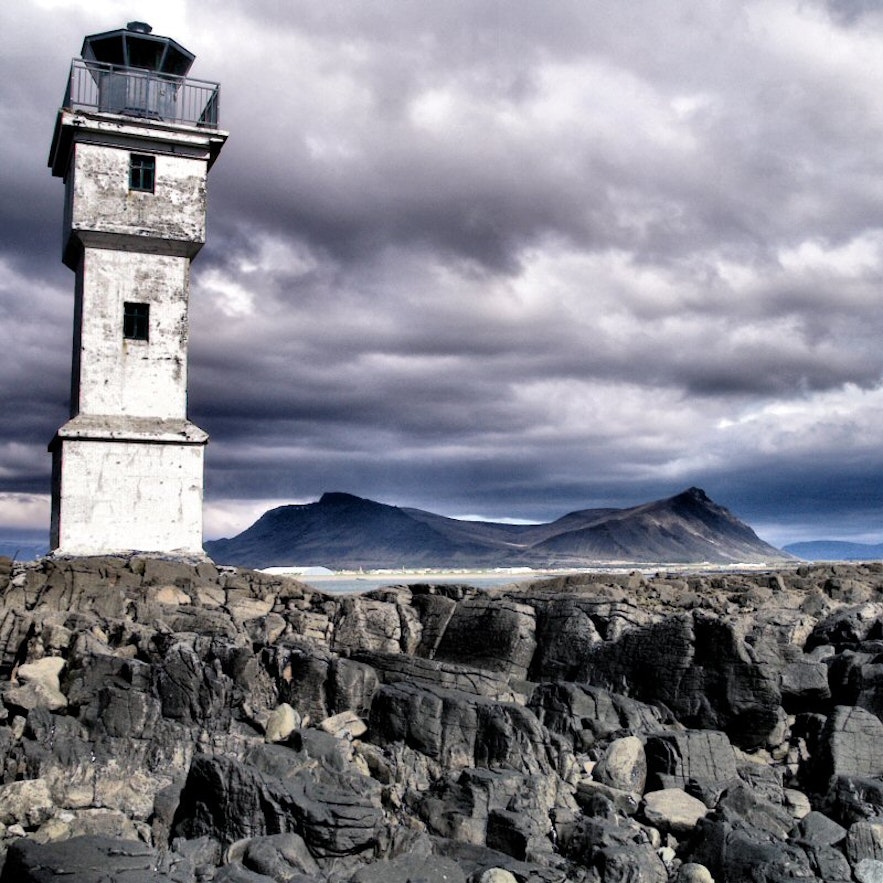 Akranes is a vibrant town of around 7000 people, and so it has all the main facilities such as accommodations, should you want to spend the weekend there; restaurants; a swimming pool; and bars. It is located a short drive north of Reykjavík, about 45 km. If you don’t have your own car, you can commute via bus from the Mjódd bus station or take a ferry from Reykjavík’s Old Harbour.

Frostbiter is only in its second year, but it is growing quickly. Last year, they premiered the feature-length horror, Child Eater, by award-winning and Reykjavík born writer and director Erlingur Thoroddsen. 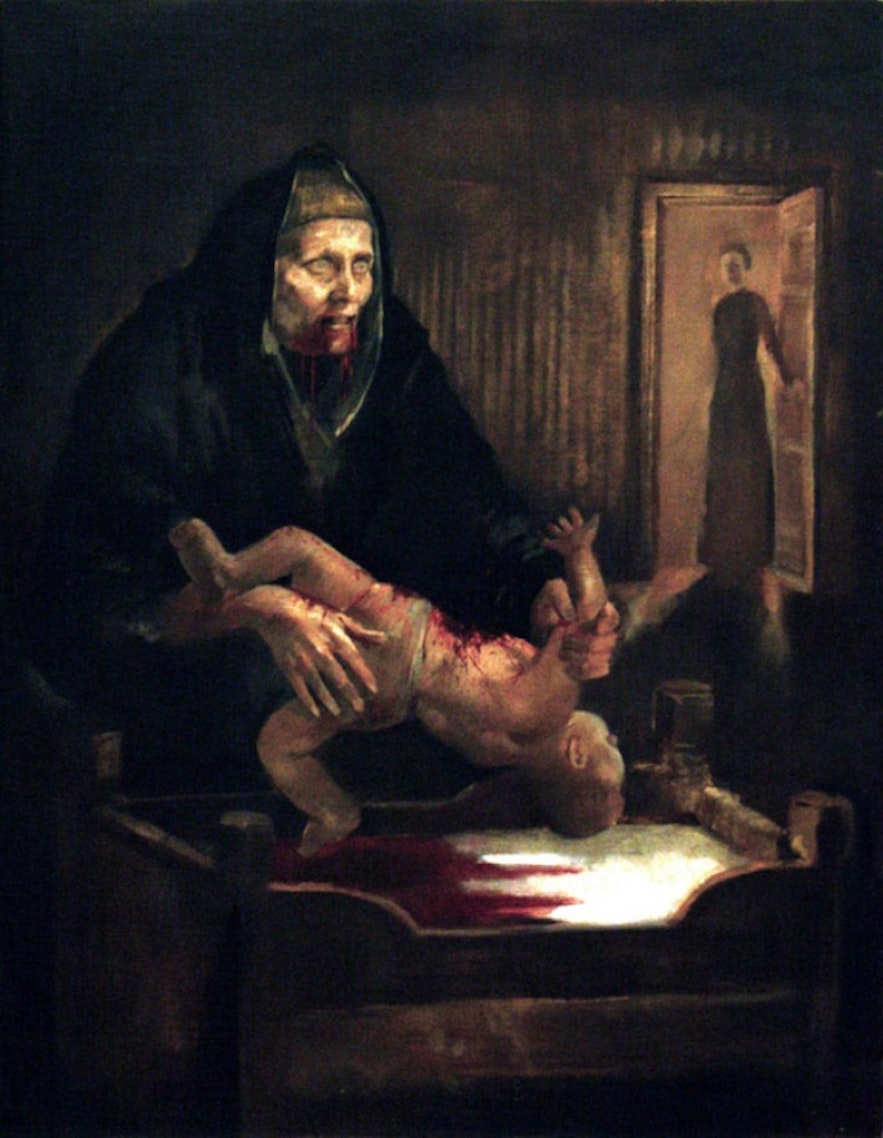 Grýla is the Icelandic version of a bogeyman; somebody who will ‘get you’ if you do not behave. She is not only famous for eating unruly children (hence the name of Erlingur’s movie) but also for being the mother of the Yule Lads.

This year, the feature-length film at Frostbiter is called The Circle and is by filmmaker Peter Callow. Four archaeology students unearth an ancient mystery during a field trip to a remote Scottish island. Whatever the mystery is, it is guarded by Nordic runes so we might see some Viking action. The Circle’s main star is the Icelandic actress Sesselia Olafs, and both she and the director will answer all of your questions in a Q & A after the movie. 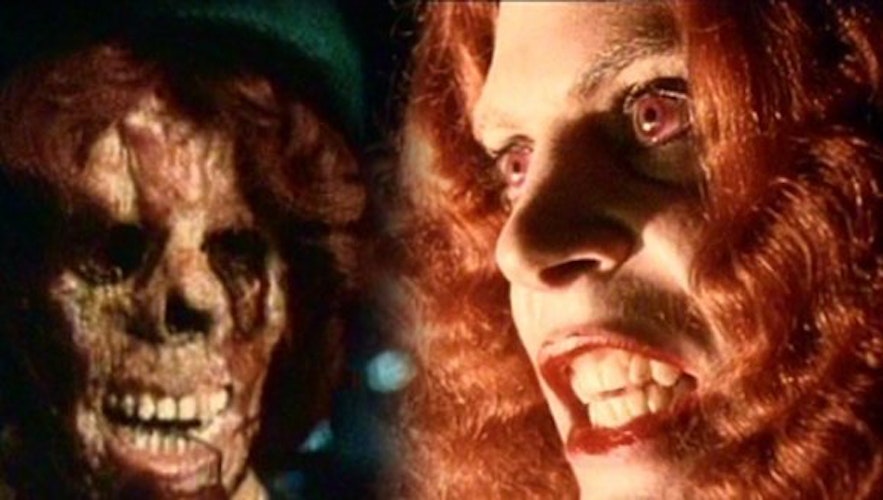 Ghost legends and ghost stories are also very popular in the Icelandic community. Much like with the elves, many Icelanders believe in ghosts, and many claim to have seen them. One of Iceland’s very first horror movie, and perhaps one of the country’s only ‘true’ cult-classic, Draugasaga or ‘Ghost Story’ will be shown at Frostbiter this year.

Draugasaga by director Viðar Víkingsson is a television movie that aired in March in 1985. It got raving reviews here in Iceland, but Norwegians considered it so bad that critics called for an end to all television collaborations between Iceland and Norway (obviously Norwegians have no taste). Now it is a little-known film, hard to come by so seeing it is something that no cult-movie lover should miss.

The screening will take place in the town's abandoned cement factory, which is the perfect setting for a scary movie. As this is an Icelandic movie, instead of popcorn, you can have delicious Icelandic meat soup. The whole night promises to be a surreal experience. 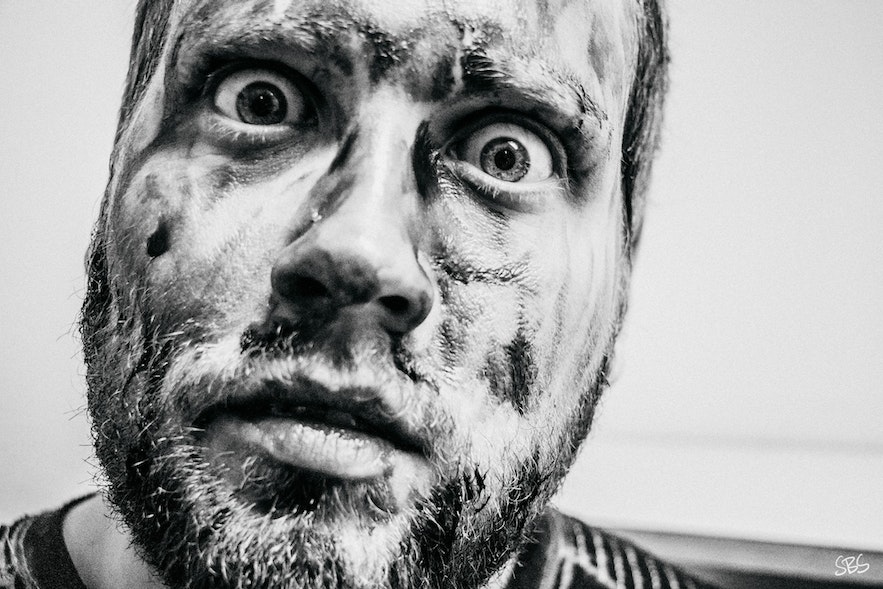 Iceland also has a few real horror stories, one of the most famous ones is the unsolved mystery of the brothers at Reynistaður farm. The brothers, as well as a few other men, went out the fall of 1780 to buy sheep but they never returned. The men’s bodies were found a couple of weeks later, but the boys remained missing. 65 years later, their bones were found under rocks a long way off course.

Frostbiter will show the documentary Haunted Trails: Fate and Apprehension of Reynistad Brothers which aims to shine a light on the events that took place over 200 years ago. Did the men die in a snowstorm or where they murdered? Why were the boys’ bodies so off course? And what is ‘the curse of the Reynistaður brothers’?

Horror from all over the world

Frostbiter will also feature an array of horror shorts, both Icelandic and international. So you’ll not only learn about Icelandic horror, but you’ll also get to see monsters from all over the world, from the United States and Albania to South Africa and Russia. There will also be a horror movie pub quiz at Dularfulla búðin or ‘The Mysterious Shop’, a steam-punk shop/café/bar/museum filled with secrets and wonders, and a horrifying party on Saturday night. 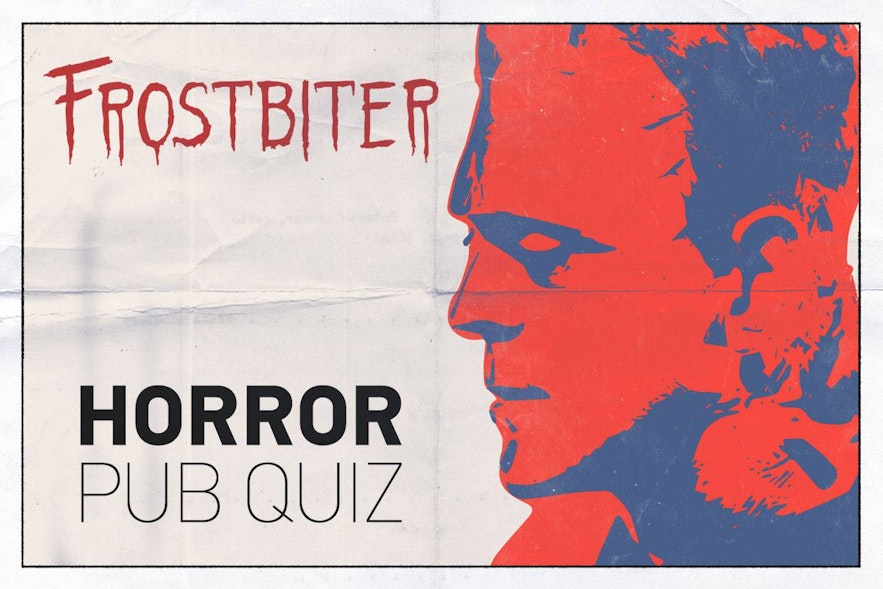 Icelandic legends and folklore are filled with child-eating monsters, ghosts, trickster elves, trolls and even the devil himself. Combine that with the cold and eternal darkness of the Icelandic winter, and you’ll get the perfect setting for a horror movie festival!

The event managers of Frostbiter are hoping that people from all over the world will come to this island of ice and fire and be inspired by these legends and the landscape. Be scared in Iceland, come to Frostbiter: Icelandic Horror Film Festival! 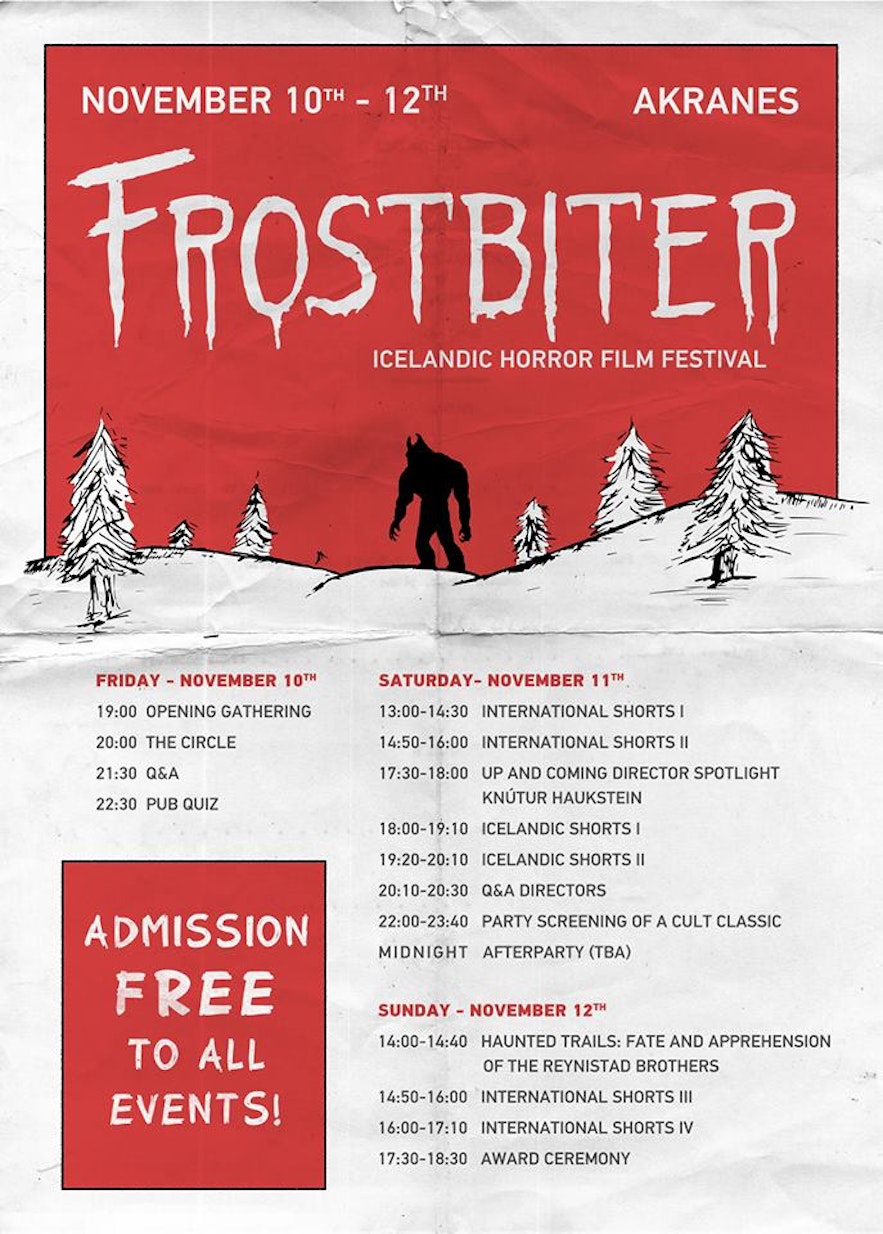