By Michael Chapman
Verified Local
"Collecting penises is like collecting anything. You can never stop, you can never catch up, you can always get a new one, a better one."

Fear not, these are not the words of some deranged, goolie-obsessed serial killer, but of Sigurður Hjartarson, founder of the Icelandic Phallological Museum. Now retired,  Sigurður has been collecting penises throughout the entirety of his adult life, accepting donations from friends and slaughterhouses, harvesting roadkill and beached animals, and even recruiting his own family members to collect potential specimens.

Having worked for over 26 years as a historian and teacher in Reykjavík,  Sigurður initially stored this strangely morbid collection in his office, though later relocated it to a designated space. Ever since then, Iceland has become the go-to location for amateur phallology enthusiasts.

The museum first opened in August 1997, where after six years, it was attracting up to 5000 visitors annually. After retirement, the museum was temporarily moved to the whale-watching capital of Iceland, the village of Húsavík, where it remained until 2011. This period might very well have not happened, given the Húsavík residents' fear that the museum was pornographic, rather than scientific, in nature.

Colloquially referred to as “Iceland’s Penis Museum”, this peculiar and fascinating exhibition space can now be found at Hafnartorg, Kalkofnsvegur 2, 101 Reykjavik. The museum is now managed by the founder's son, Hjörtur Gísli Sigurðsson, who shares his father's passion for uncovering uncoverables across the island.

Housing over 215 penile specimens from over 53 Icelandic land and sea mammals, the Phallological Museum is a must stop for all those out there eager to observe all manner of ding-a-lings. Aside from Icelandic mammals, the museum houses over fifty foreign specimens, putting the total number in the collection to 290 members.

Exhibited in large glass cylinders, guests can see up-close the anatomy and evolutionary differences in the various specimens; here, size doesn’t matter, pushed aside for an appreciation for all todgers, be they big or small.

And boy oh boy, are the willies on display different. Consider, for instance, the shape, size and colouring of an adorable little field mouse penis compared to the gargantuan schlong of a Blue Whale; it’s almost impossible to believe both can be used for the same thing, and yet, if there's one thing the museum stands by, it's the spectacular complexity of nature.

The Blue Whale penis is the largest exhibition, measuring an incredible 170 cm (67 in) in length and weighing 70 kilograms (150 lb). The baculum—aka; the penile bone—of a hamster is the museum’s tiniest specimen, measuring only 2 mm and requiring a magnifying glass to see.

Aside from those aforementioned, visitors can also look upon those belonging to: walrus, seals, dolphins and other cetaceans, goats, horses, reindeer, dogs, cats, minks, polar bears and even that of a Mongolian Gerbil. In essence, anyone dead set on eyeing a collection of preserved animal whangers will find more than fill here. 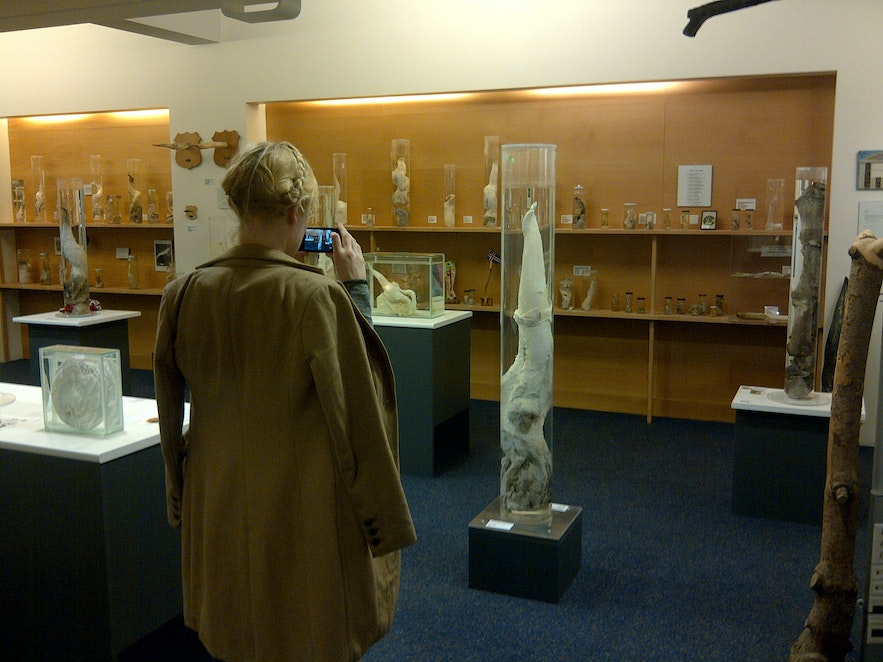 The museum is not only dedicated to the shaft itself, but to the accompanying testicles, sperm glands, scrotum skins, penile bones and foreskins. The whole set, basically.

Amidst the towering bell-ends, visitors can look upon lampshades, walking sticks and whips made from numerous types of gonads, as well as a set of 15 silver sculptures based on the genitalia of the Icelandic handball team (...the team’s goalkeeper assures the public that the sculptures were not cast.)

Given the recent success of the Icelandic national football team in the 2016 Euros, it is only a matter of time until we're looking at a new set of solid, silver tackles. Thanks to the team's popularity and general magnetism, it is likely that such an endeavour would do much to further increase the museum's already prolific visitor count. After all, who in this world doesn't want to see what Aron Gunnarsson is packing under his shorts?

Take 2011 as an example; over 12,000 people visited the museum, 60% of whom were women. This doesn't strike me as particularly surprising; last year, my own father stubbornly refused to enter, I imagine, in fear that someone might catch him reluctantly enjoying himself. I, on the other hand, am of the thought that when you've seen one winkle-stick, you've seen them all... a point, in fact, only disproved upon entering the museum itself. 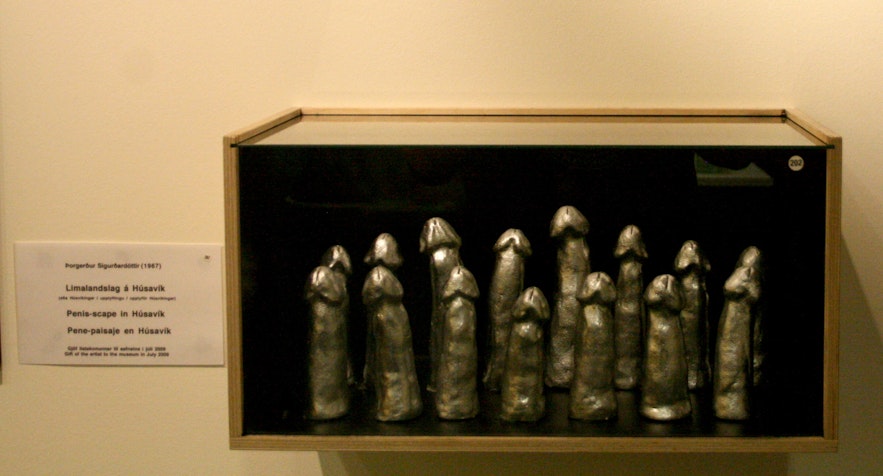 The Icelandic Phallological Museum also boasts two other sections; ‘Folklore’ and ‘Foreign’. In the folklore section, visitors can look upon all kinds of fantastical penises straight out of the pages of Icelandic literature. Among them, one can find the reproductive organs of a Merman, Icelandic elves, ghosts, changelings, trolls and even sea monsters.

Arguably, one of the more interesting penises originates from The Corpse-Eating Cat of Thingmuli, a nasty little moggy who, in the 19th century, used to bury itself into fresh graves to feed on the cadavers. Thankfully, the Penis Museum is filled with wonderful little stories like that!

In the museum's foreign section, visitors can look upon the phallic weaponry of such exotic creatures as giraffes, zebras, bears, elephants, coyotes and wolves, among others. In this sense, the Icelandic Phallological Museum can be considered like a scientific mausoleum, dedicated to the field of phallology, all the while presenting its findings with an entertaining flair. 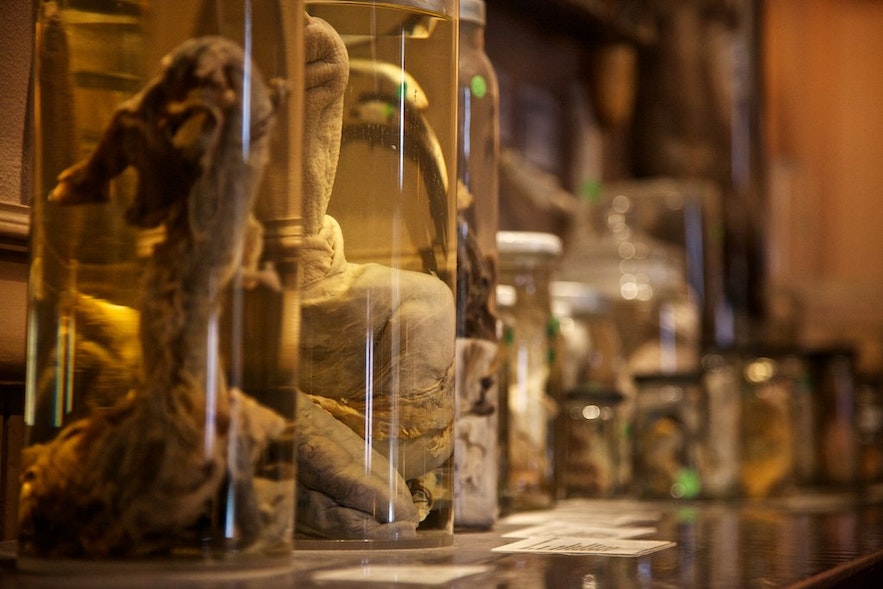 For some years, the museum has nurtured ambitions to obtain a larger human penis, putting out calls around the world for prospective donors. In 2011, the museum acquired their first Homosapien knob, belonging to a 95-year-old Icelandic donor from Akureyri, famous in his youth for "prolific womanising." By donating, the man hoped to preserve his legacy as Iceland's very own Casanova.

As bad luck would have it, however, a screw-up in the pickling process soon meant that this particular appendage was unusable, having shrunk and shrivelled down into what can only be described as a grey-brown micro-penis. Though disappointed in the outcome, nothing could dampen Sigurður's enthusiasm for long. Afterwards, he quickly expressed his confidence, " I will get a younger and a bigger and better one soon."

In 2014, the museum had a stroke of luck, after the American actor and writer, Jonah Falcon, agreed to donate his whopping great manhood (13.5 inches/34 cm) to the museum after an invitation via The Huffington Post. At Falcon’s own suggestion, following his death, his penis will be mounted alongside one of the museum’s many whale penises for an exhibition called “Jonah and the Whale”, in peculiar tribute to the ancient biblical story.

And who could forget the museum gift shop, ‘The Phallus Store’? Clearly visible from the street-front window, passersby can get a taste of the many winkle-inspired trinkets without ever setting foot inside.

Among the merchandise, one can purchase a pecker-shaped key fob, a bottle-opener/wooden-erection, numerous clothing items emblazoned with the museum’s logo and quotes like "This Museum Is Not For Pussies", shot glasses, fridge magnets that read “It’s all about the dicks!” and even designer condoms, inspired by some of the country’s most beloved visitor attractions (...Geysir is, of course, amongst them).

If so inclined, one can buy cuddly toys made to resemble googley-eyed members or even cotton willy warmers, the perfect accessories for walking around Iceland in the buff. If visiting the museum has made you a tad peckish—and let’s face it, who could blame you?—there is also the Phallological Museum’s own brand of mixed chocolate, as well as large bags of something called “Sex Pasta” (word of advice; don’t ask about the accompanying sauce.)

The museum itself has had a wealth of international attention, having been the subject of over one hundred articles (including this one!) from over twenty-six different countries. It also took centre stage in the 2012 Vice News film, "The Final Member", documenting Sigurður Hjartarson's noble quest to find a human penis to add to his ever-growing collection. The documentary was directed by Canadian filmmakers, Jonah Bekhor and Zach Math.

So, if you happen to be short of ideas whilst staying in the capital, why not venture down to the Icelandic Phallological Museum and see for yourself just how strange, quasi-taboo and fascinating this collection of erections truly is?