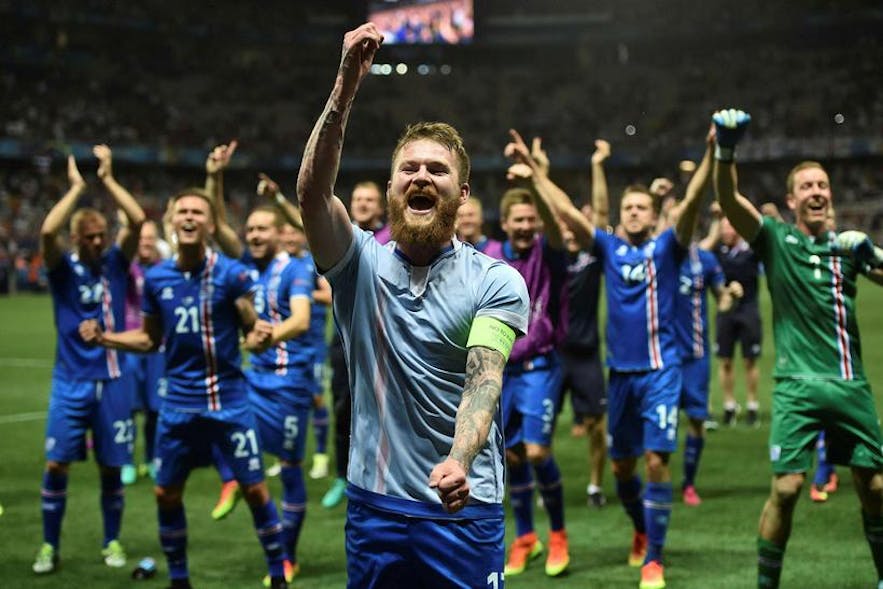 Yesterday after Iceland secured its place in the round of 8 in the European Championships, a street party erupted in Reykjavík!

Long after the match was over, people were dancing and singing into the bright and clear summer night. I shot a few videos just to give people a glance of what it was like. After having lived in Brazil and experienced the football street parties there, it didn't feel much different (except I was a lot more involved this time around - sorry Corinthians, but Iceland's win got me a little more excited!)

Drums, singing, dancing, fireworks, beer, more dancing, more singing - and delightfully, not a fight anywhere in sight! Just everyone being happy together :)

This video is dedicated to my Brazilian family:

I wrote a short blog about Iceland's victory over England last night right after the match and posted it on Guide to Iceland's Facebook site - and the overwhelming response has been great, it seems like Iceland has got support from all over the world! Takk! :D

I especially enjoyed seeing the overwhelming support coming from the Faroe Islands!

And apparently people seem to especially like our 'slow Viking hand clap' celebrations, as demonstrated here at the field celebrations:

To the English fans, my condolences. England has a great team and I'm sure they'll do very well in the next big cup. The fans need to unite as well and cheer them on instead of putting pressure on them and booing on them. (I don't want to put the Icelandic fans on a high horse, we also get upset when we're not winning - but still try to keep up the cheering as much as we can).

Here you can see all sorts of live scenes from Reykjavík's celebrations, from a foreign perspective:

It's not all doom and gloom for the English team and their fans however!

As a treat for the English team, they can all go whale watching for free in Iceland, from the town of Húsavík in North Iceland. Before the game the company Norðursigling (North Sailing) offered the English team players a free whale watching tour whenever they want to make up for the loss. They even extended their offer to the English fans for the whole day today.

So Icelanders are still trying to be nice to the other teams - but come this Sunday we will be giving it all to to defeat the French, on their home turf! :D