Iceland TIES with Argentina!!! Iceland's First Game in the World Cup, EVER!

IT'S a TIE! Iceland has never lost a game in the World Cup! Messi didn't score from a penalty! Goalkeeper Hannes Þór Halldórsson saves a penalty! Alfreð Finnbogason goes down in football history as the first Icelander ever to score a goal in the World Cup!!

In recent days, weeks, months the excitement for the World Cup in football in Iceland has been palpable and steadily rising each day, climaxing today with Iceland's first match - against no other than the football legends from Argentina. It only helped the excitement that the game took place on a Saturday, and on the 16th of June that's a traditional party day for Icelanders, as it's the day before a national holiday - Iceland's Independence Day.

Although Iceland's team has been doing well recently, and were a feisty match for the likes of Portugal, and beating England's team in the last European Cup in 2016, then nerves have been high for this match.

Of course, there were plenty of people optimistic enough to believe Iceland would win, and have nothing but undying belief and support in the team, but others were more realistic and thought this would be a game where Iceland should put most of their efforts into defence as to not get slaughtered by the likes of Messi. I mean, it's Argentina, one of the best teams in the world, and objectively speaking Argentina is the likeliest winner of their group (Group D).

Of course we all did hope Iceland would win though, how amazing would that be? Or get a tie, as that would also be incredible - and OMG this was an exciting game!!! 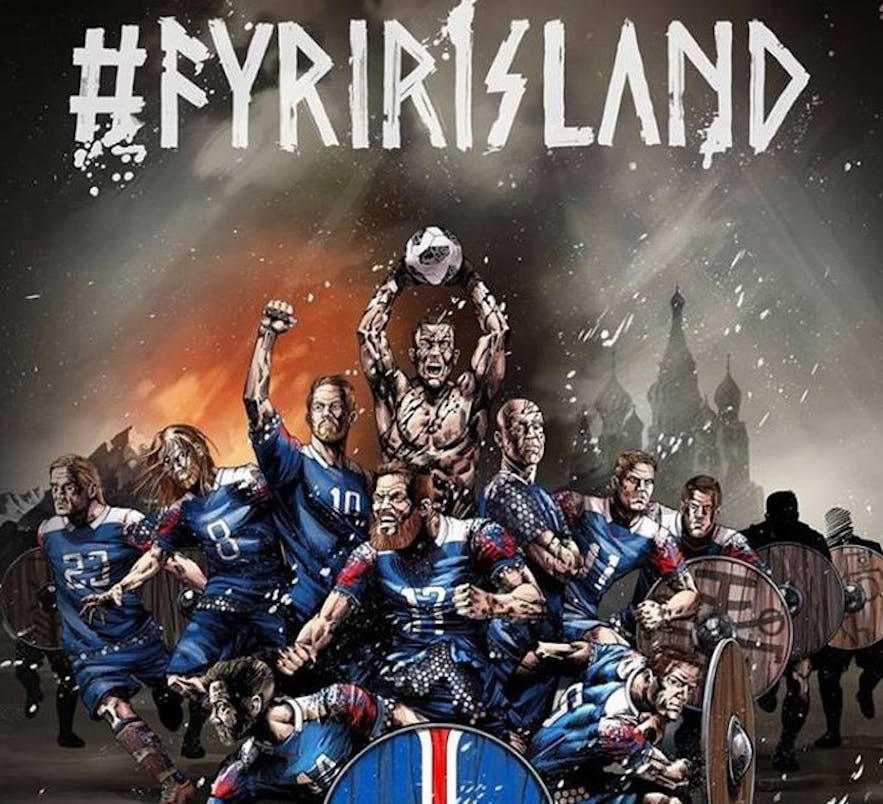 Throughout the game Iceland fought hard, with their first chance to score happening quickly. However the first goal of the game happened on 18th minute when Argentina made the first goal to the instant cheer of the Argentinian side.

However, the Icelandic spirit was far from being broken and Iceland settled the score only 5 minutes later, with a beautiful goal by Alfreð Finnbogason - the first goal Iceland scores in the World Cup!

Argentina was in possession of the ball much more than Iceland, and even got a penalty (after one of countless fall-overs). When Messi got ready for the penalty, then it looked like all hope would be out. But NO! Hannes Þór Halldórsson, Iceland's incredible goalie (and filmmaker) saved the penalty! He's the first goalkeeper to save a penalty by Messi in a large football match in the world!

If the Icelandic team members don't all get signed up for the best football teams in the world after this game, then I'll eat my hat. Several hats.

The support for the Icelandic team throughout the game was incredible, and the support Iceland has received leading up to the game has been overwhelming. Of course Iceland is being treated like the underdog, or the road leading up to entering the World Cup is being handled like a fairytale.

But the team has worked hard to get to where they are today, and I can't wait to see what will happen in the next two matches against Nigeria and Croatia.

Next Iceland games are the 22nd of June at 3pm (GMT - Iceland local time) against Nigeria and on the 26th of June at 6pm (GMT) against Croatia.

How Does Iceland's Football Success Affect the Nation? 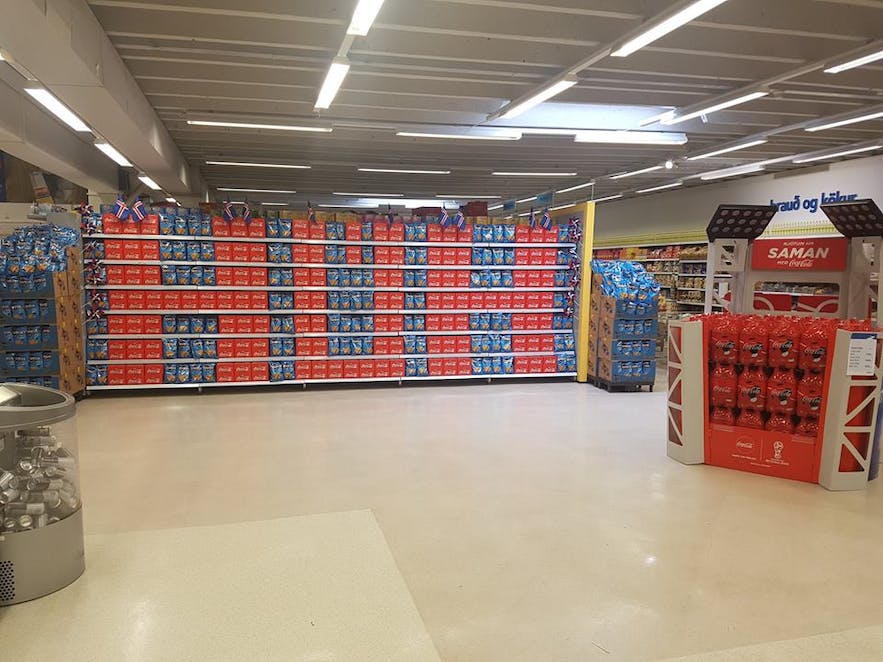 It's safe to say that all of Iceland was watching this game, and will be watching Iceland's upcoming matches, even people that normally have no interest in football. Comedian Hugleikur Dagsson is a good example, he notoriously has no interest in football, but has been designing football T-shirts with HÚH printed on them (the Viking football chant you undoubtedly heard during the game, if you were watching).

Hallgrímskirkja church, in the centre of Reykjavík, has been playing 'Ég er kominn heim' on a loop for the past few hours - a song that has become the unofficial support song for Iceland's team.

Shops have decorated their aisles in the country's flag colours. And everywhere you go, you'll hear someone shouting HÚH from a distant street (or right in your ear). Right now I'm listening to it next door.

Plenty of Icelanders have gone to Russia to watch the games live (during the Euro Cup a large percentage of the nation went to France to watch the matches), but there are still plenty of people still in the country and making a great, big party out of the whole thing.

The above video is Coca Cola's commercial, but they've been supporting Icelandic football for 30 years, and it's fun to mention that Hannes Þór Halldórsson, who is the goalkeeper for the Icelandic football team, (you know, the one that saved all those goals and made Messi look messy) was the director of the impressive advertisement. It really shows how the heart beats within the Icelandic nation.

I feel like it sums up quite accurately the feel of the Icelandic nation recently.

Most of the people in the advertisement are locals doing their regular jobs, both known and unknown ones. There's a known baker from the town of Ísafjörður, Gunnar Nelson MMA fighter, Auður Linda is Iceland's toughest car mechanic, there are fishermen and snowboarders, Sara Sigmundsdóttir crossfit athlete and of course Gummi Ben, football commentator that earned his fame around the world when he absolutely went nuts when Iceland was participating in the Euro Cup in 2016. 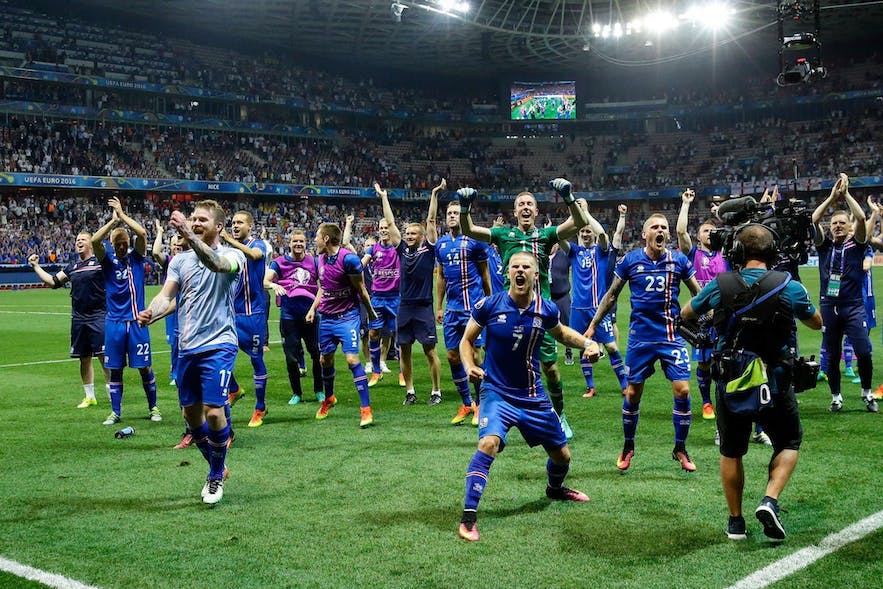 It's been a steady excitement, right at the back of our heads, and now we've played our first game in the World Cup - we can't wait to see what will happen next! No matter what will happen, Iceland will celebrate this momentous occasion for years to come! And we're off to an incredible start, tying with possibly the strongest team in the group :D

And, interestingly, the football fever in Iceland is having a slightly unexpected but positive influence on Iceland's society. Football, and other sports, has actually helped to reduce drinking and drugs amongst the youth in Iceland, as more and more kids are inspired to take part in sports when they see such great role models within the country.

Where to Watch World Cup Games in Iceland?

If you're in Reykjavík (or anywhere else in Iceland) then in most likelihood you'll want to participate in the electric atmosphere found all around the country. Literally every TV and screen in the country will be showing the World Cup games.

I watched the first one at Hlemmur Square (bar, hostel, restaurant, hotel), where they will be screening every single game of the World Cup. It's a convenient location right downtown, indoors in case the weather doesn't play along (like today when it's raining buckets in Reykjavík), and they have happy hour prices during all matches as well as tasty finger food. Can't beat that! When it turns to the first week of July they'll also be hosting a bunch of exciting events as a part of the Reykjavík Fringe Festival, so before or after a game you can enjoy live music, listen to stand-up comedy, check out installations or enjoy magic shows!

Other popular locations to watch the games are at Ingólfstorg square (seen in the video above) and nearby Hjartartorg square located centrally on Laugavegur shopping street. However, these are both outdoors so not as good if it's raining or cold outside. As a plus though, you can bring your own beers, but the downside is that there are no readily available bathrooms nearby (except in nearby bars). 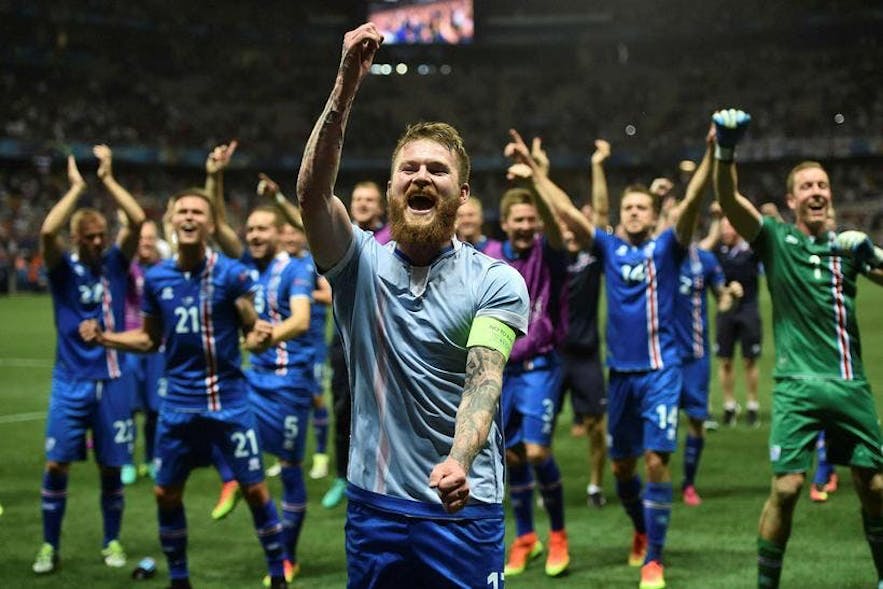 If you want really comfy seats and a great sound system, then you can head to Bíó Paradís, Reykjavík's art house cinema. They'll even screen kids films at the same time as the matches, so you can send your kid over to watch a kiddie movie if they're not into the football. Free entry and offers on beers and hot dogs.

Gamla bíó will have an enormous screen indoors, and on the top floor at the Peterson Suite there's a screen outdoors on the rooftop, with gorgeous views over town as well (and without a doubt some cocktail offers). Great place to go if the weather is nice.

The Student Cellar (Stúdentakjallarinn) will also be screening each game, where you'll likely find a crowd in their early twenties. Then there's more than a handful of smaller bars showing the games, and most likely all of them will have some great drink offers. Those include (but are far from limited to) Dubliners, Sæta Svínið, Lebowski and of course Bjarni Fel sport bar.