The Snæfellsnes peninsula in West-Iceland is a beautiful part of Iceland. Through the years I have written detailed travel-blogs in 5-parts of the peninsula in chronological order to make it easier for our foreign guests to visit this beautiful peninsula.

I want to show you a tour which I have joined twice and should not be missed when visiting Stykkishólmur, the capital of the magical Snæfellsnes peninsula! There are various boat tours available by Seatours, but I chose Ævintýrasigling or Adventure voyage - as I liked the name of that tour. A similar tour with Seatours is called the Viking Sushi Adventure.

Top photo: the fruit of the ocean on the boat tour 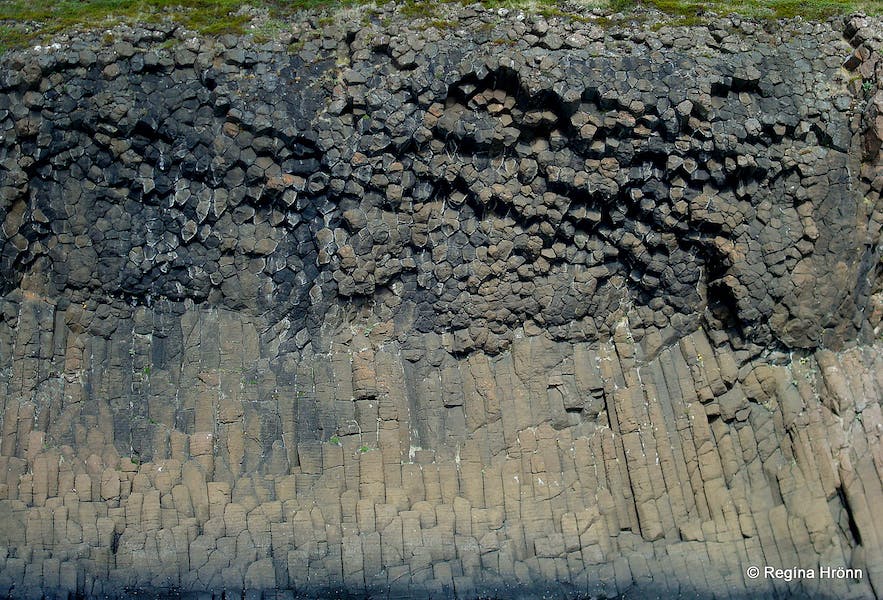 Basalt columns in the Breiðafjarðareyjar islands 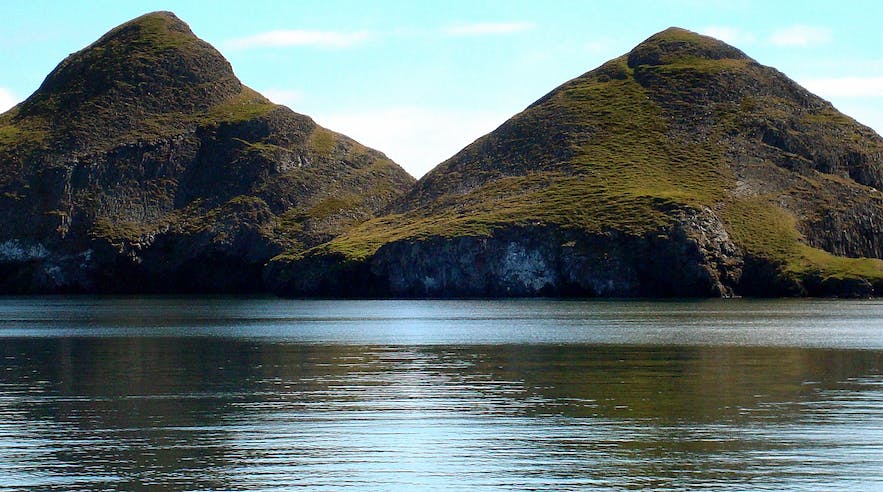 Dímonarklakkar islands are the highest ones of all of the Breiðafjörður islands. Small Klakkur (Litli klakkur) is 54 m high and Big Klakkur (Stóri klakkur) is 72 m, belong to an archipelago called Klakkeyjar islands. They are so majestic hovering over the other islands.

There used to be woodland here on Klakkeyjar islands as in so many places in Iceland, but it is all gone now.

Birdlife on the islands 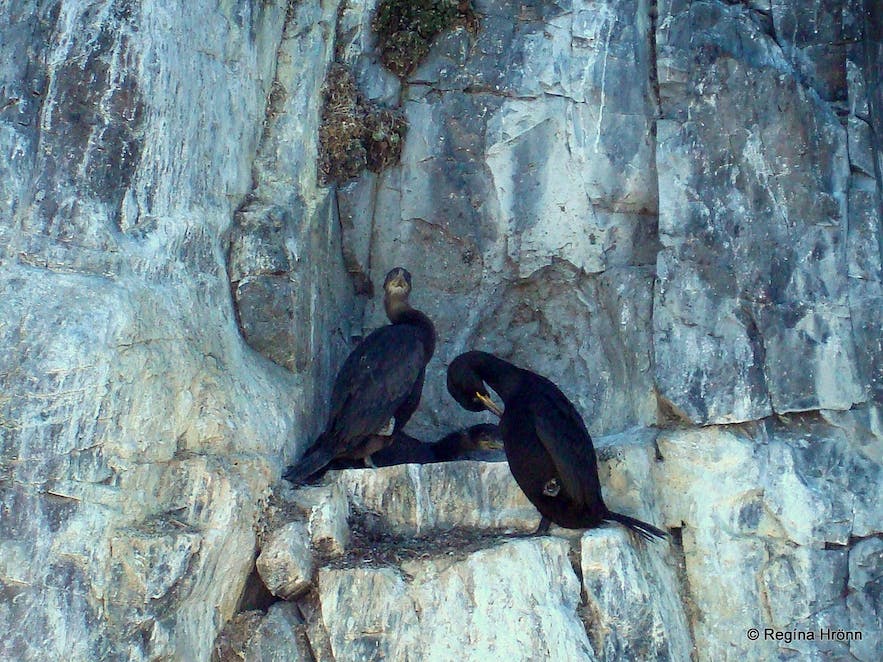 Shags (toppskarfur) in the cliffs

On Klakkeyjar islands a number of shags nest, which one will get very close to on the boat tour. It was so cool getting so close up to them and they didn't seem to mind us, they just ignored us. I guess they are used to boats coming so close to have a look at them, and they know that we are only looking and not there to hurt them.

The boat sailed in between the islands for bird-watching and we spotted a myriad of kittiwakes, shags, and puffins. I love puffins and it was so lovely being so close to them. 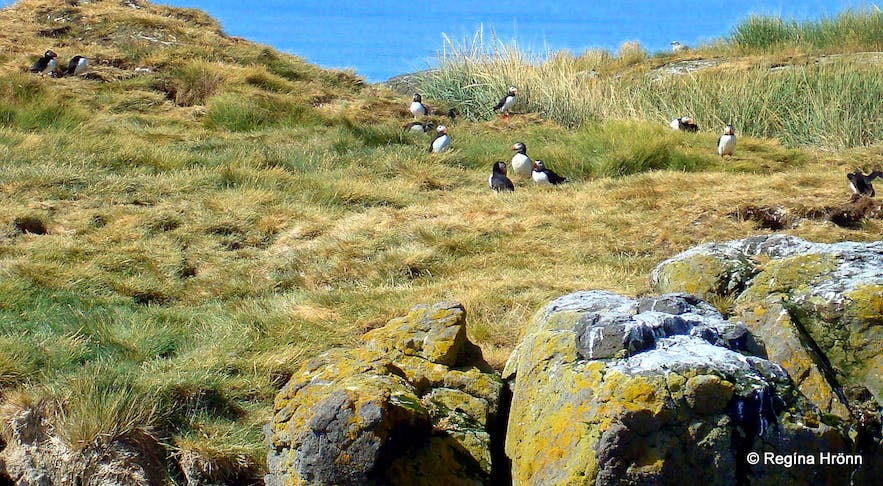 You will be able to see the puffins in Iceland during their breeding season from mid-April until mid-August. We also have a puffin express tour from Reykjavík, where you can see the puffins nesting on the islands on Faxaflói bay. 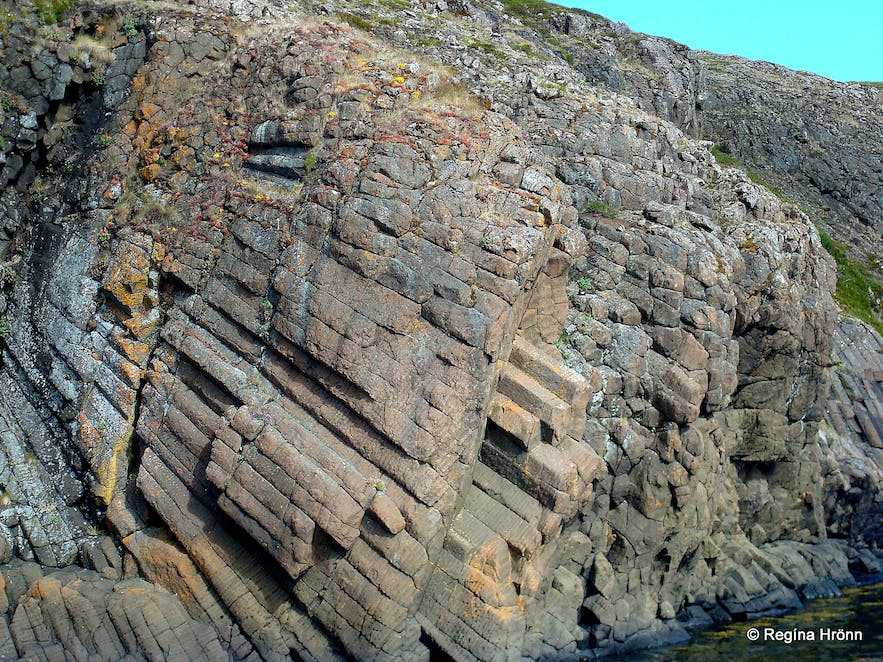 We were shown some beautiful columnar basalt in various forms depending on which island we were visiting. The columnar basalt is riffled in one of the islands and it is often referred to as the Bookshelves of God :)

These islands were populated in earlier times, and on Hrappsey island the first printery in Iceland was to be found. These islands are filled with so much interesting history and it was very educational for me to sail amongst the now deserted island, thinking about how full of life they were back then. 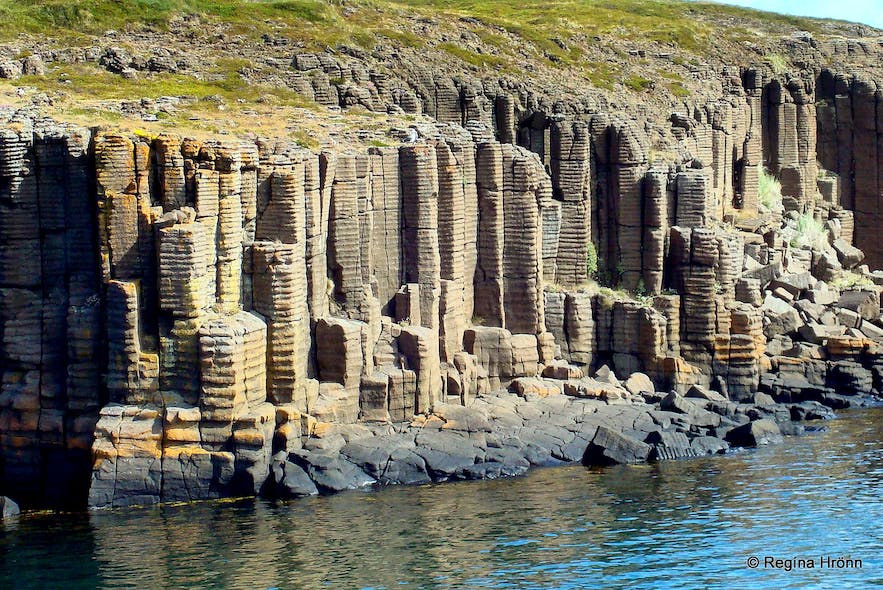 To begin with, the Vikings lived on these islands, and some of them were not the most peaceful of men. We were shown a rock in Breiðafjörður bay where people were hung and left to hang for months as a warning to others to behave right!

Just imagine what a dreadful sight that must have been!  Especially if this was one of your relatives or loved ones :( 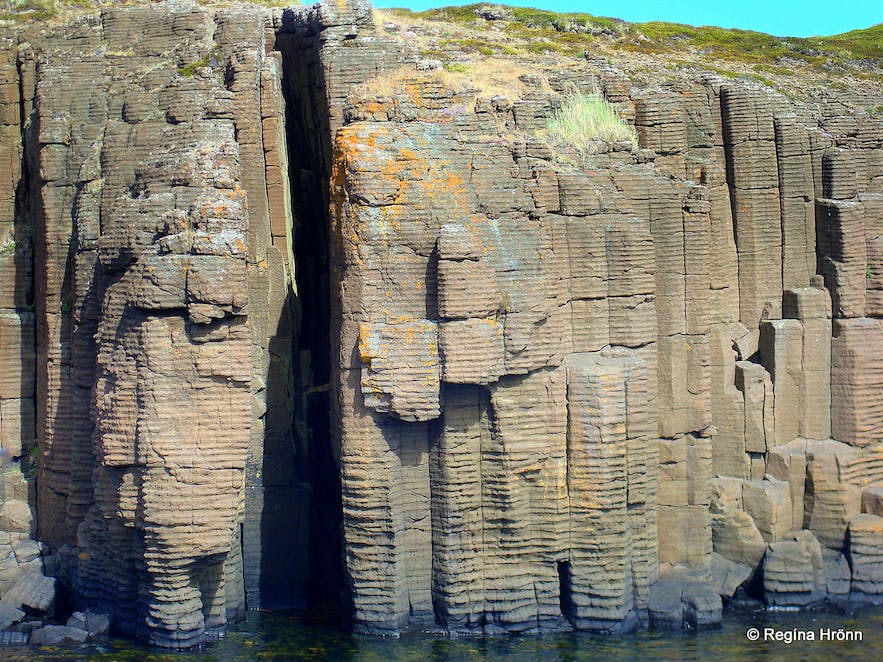 This hanging place is a gap in a very peculiar riffled columnar basalt island. 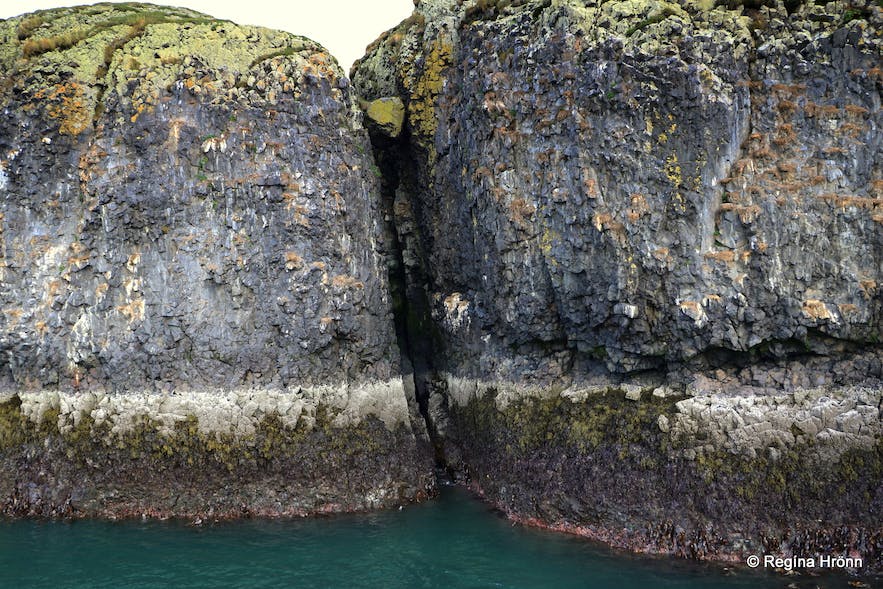 On Hvítbjarnarey island (Polar bear island) you will see a boulder in a rift in the rocks. It is of a different material than the other rocks on the island and the origin of this particular boulder is explained in Þjóðsögur Jóns Árnasonar - the Folklore of Jón Árnason:

Hvítabjarnareyja island (Polar bear island) is one of the islands above Stykkishólmur in Breiðafjörður. It was named after a polar bear, which came ashore on the island and lay to rest on a stall on the southern part of the island, which is surrounded by tall cliffs. A giantess was on the mainland, people say that she lived at Helgafell before Christianity was adopted in Iceland and a church was erected at Helgafell, but trolls are no fans of Christianity and churches. 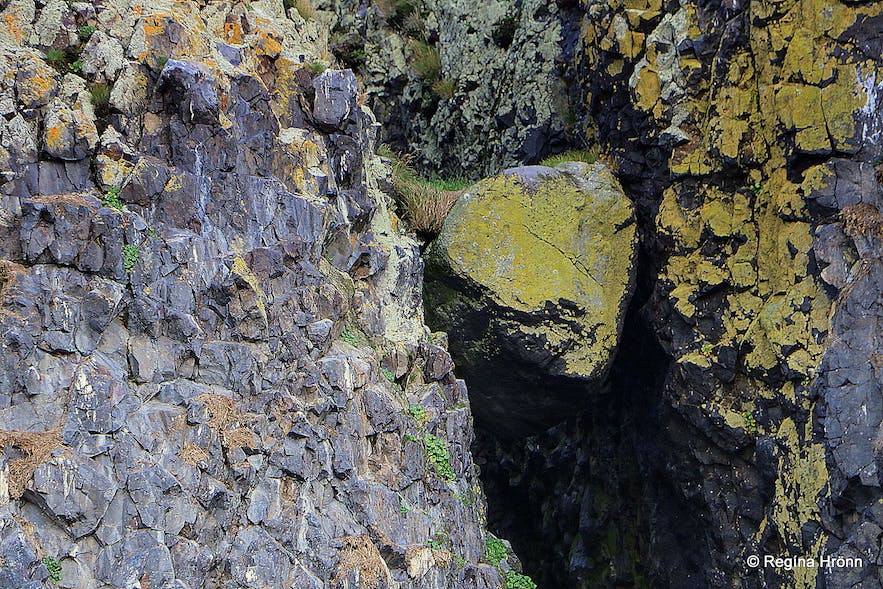 The giantess noticed that the polar bear was on the aforementioned stall on the island and thus she walked on top of Þingvallaborg, which is opposite the island from the mainland, and threw a huge boulder over to the island to kill the polar bear.  But as fate has it the boulder landed higher up than she intended and landed on the cliff tops, which are above and to both sides of the stall. The boulder still lies above the stall, but the polar bear didn't get hurt.

Another account from this region in the west is that the giantess who lived in Mt. Kerlingarfjall, noticed that a man had gone fishing on a boat on Hrappseyjarsund strait, between Hrappsey island and Stykkishólmur. The Giantess had a grudge against this man, the reason why is not mentioned in the account, and threw a huge rock towards the man sitting in his boat, but that rock landed in Hvítabjarnarey island and can still be seen there, but the giantess failed to kill the man.

Close to Nesvogur by Stykkishólmur, one can find 3 little hummocks, which are believed to have been thrown there by the giantess in Kerlingarskarð cleft, but she meant to destroy the church at Helgafell with these hummocks". 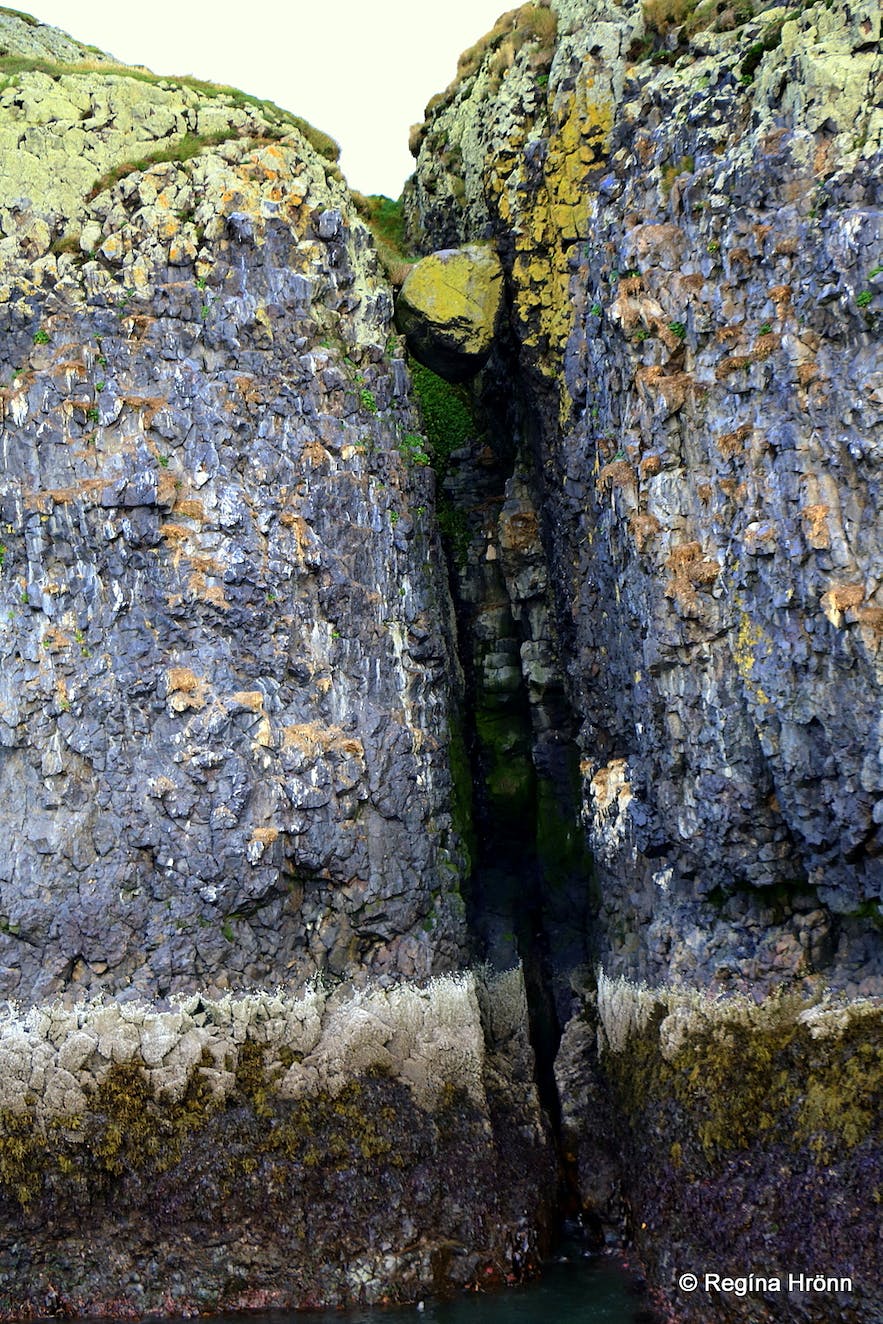 The story we were told on the boat is that the boulder is said to have been thrown there by the giantess, who used to live at Mt. Helgafell as she wanted to destroy the church at Mt. Helgafell by throwing the bolder at it, but she missed and the boulder landed here on this island.

So you can see that there are several accounts on why this boulder is where it is :)

The hiding place of Eirik the Red 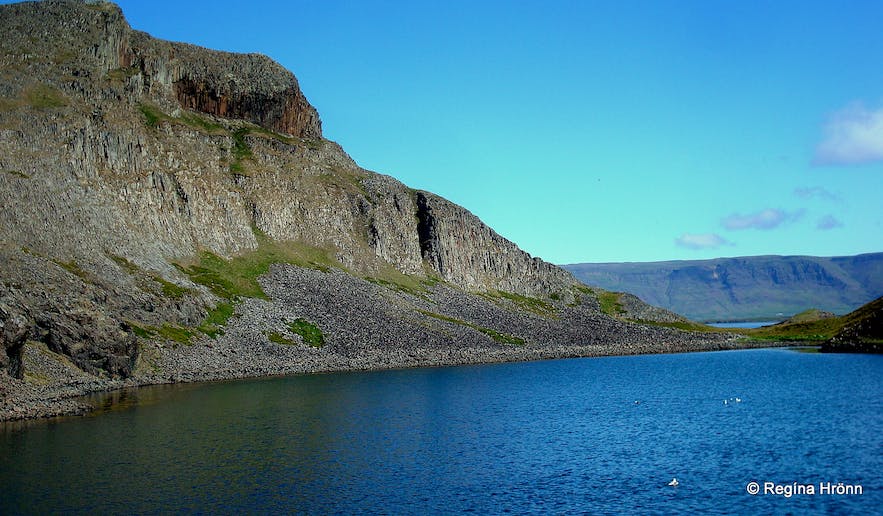 We were shown the hiding place of Eiríkur rauði or Eirik the Red, the father of Leif the Lucky. Eiríkur had been chased out of Norway for killings and was later also chased out of his home at Eiríksstaðir for more killings.

He tried living on Öxney (Yxney) island and more islands but the same happened there. I have written another travel-blog on Eirík the Red, in which you can see a replica of the Viking longhouse in which he lived. 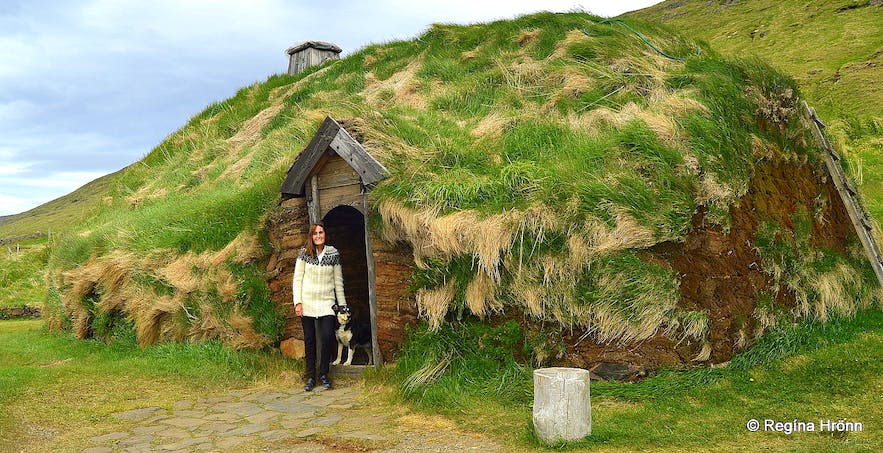 The replica of the turf longhouse at Eiríksstaðir

We were told many stories about life in the olden days on the islands by a very good guide on board the boat. It is so nice for a history buff like myself to be guided around like this :) Beautiful nature, lovely weather, history lessons, and the fruit of the ocean - what more can one ask for?

The Fruit of the Ocean 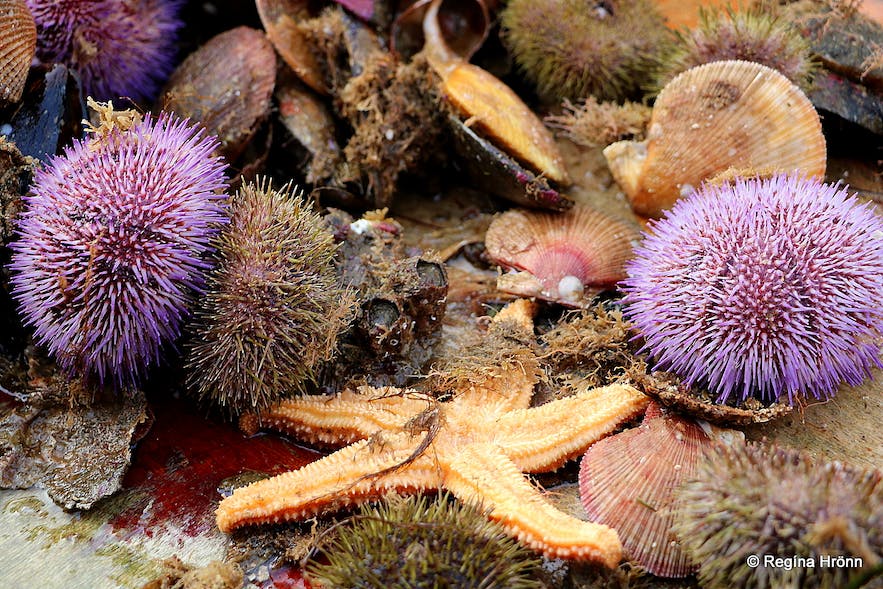 Now it was time for what some call the highlight of the tour of the Breiðafjarðareyjar islands - the throwing out of the trawl - called the dredge. This was actually quite exciting, two members of the crew lowered the dredge into the sea and towed it along the seafloor. And we waited eagerly for the catch of the day!

Everybody on the boat watched as the dredge was drawn in to see what they had caught. The catch was quite impressive: beautiful purple sea-urchins, red and orange starfish, scallops, sea cucumbers, crabs, and all kinds of shells and conches - to sum it up: the Fruit of the Ocean. 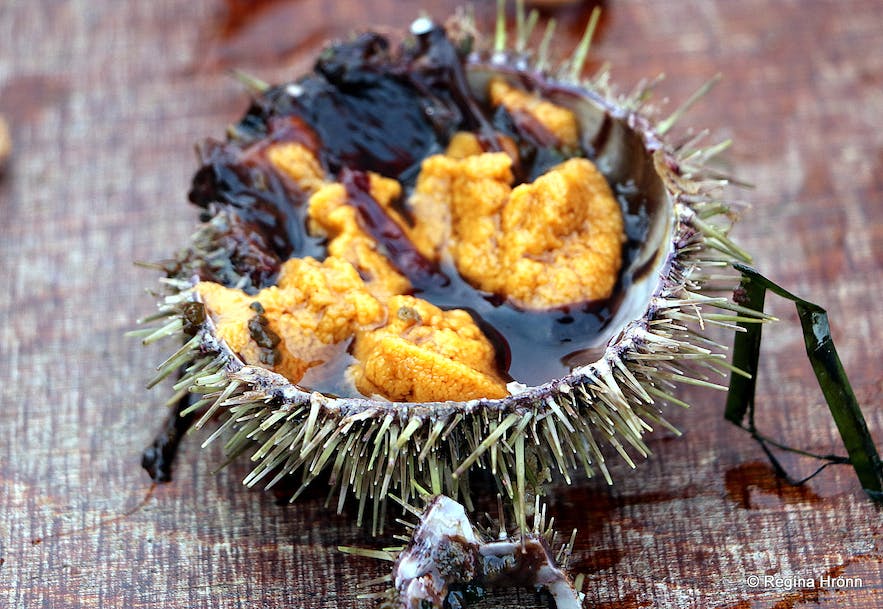 The crew opened up the sea-urchins and scallops and offered them to the group - fresh and raw and on the house. Sea-urchin roe is considered to be a delicacy and an aphrodisiac.

We were also offered a knife in case we wanted to try to open them up by ourselves.

The scallops were offered to us in the shell. I was amazed at the savvy of the crew; they conjured up a luxurious meal straight from the ocean! One has got to love these fishermen :) 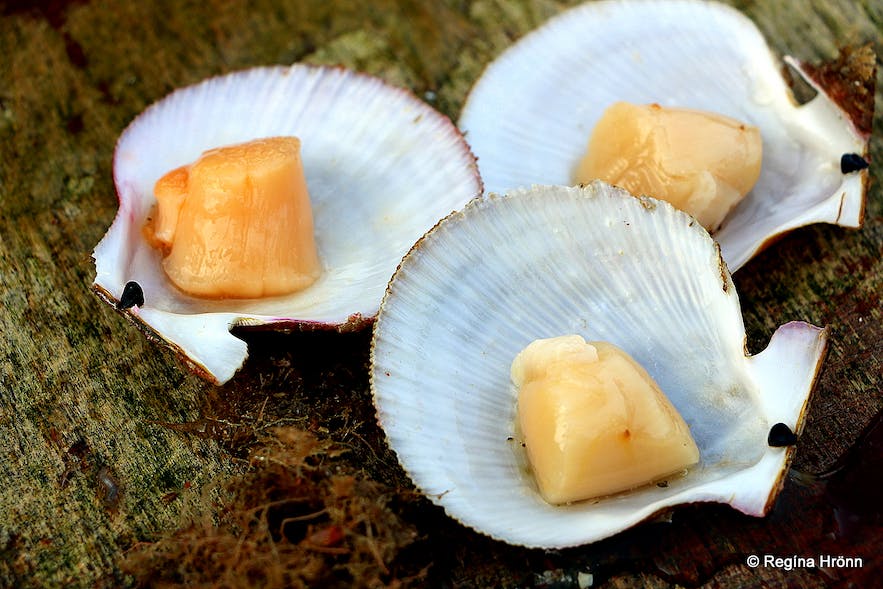 What I loved was seeing the shellfish in its natural state, as it were, as I only ever see conches and shells empty on the shore, so watching them like this (see the photo below) was just amazing.

Although I must say that I felt a little sorry for them for being pulled out of the sea like this - they must have been quite startled all of a sudden being in a totally different atmosphere, as it were. 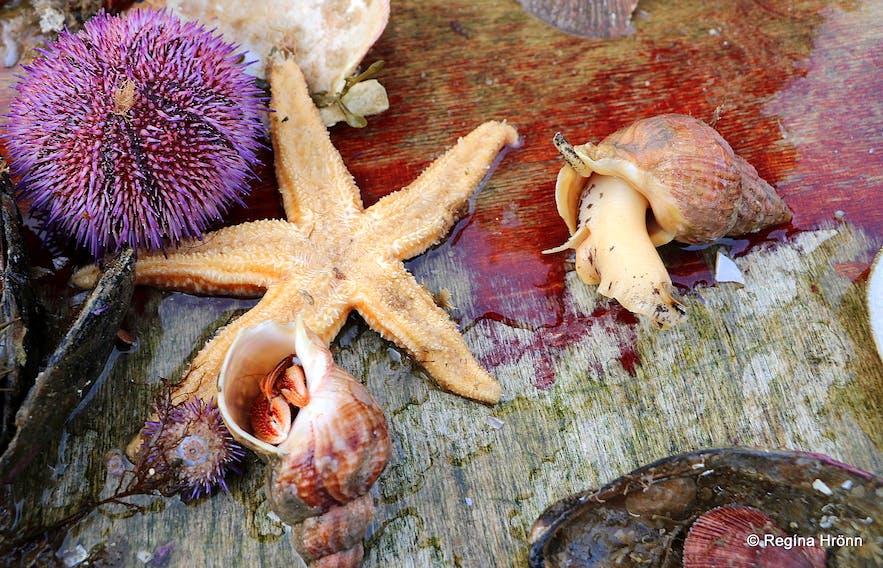 For sale on the tour was white wine in small bottles. I opted out but ended up being given a bottle by a tour guide who had paid for the wine and had miscalculated the number of people in his group :) 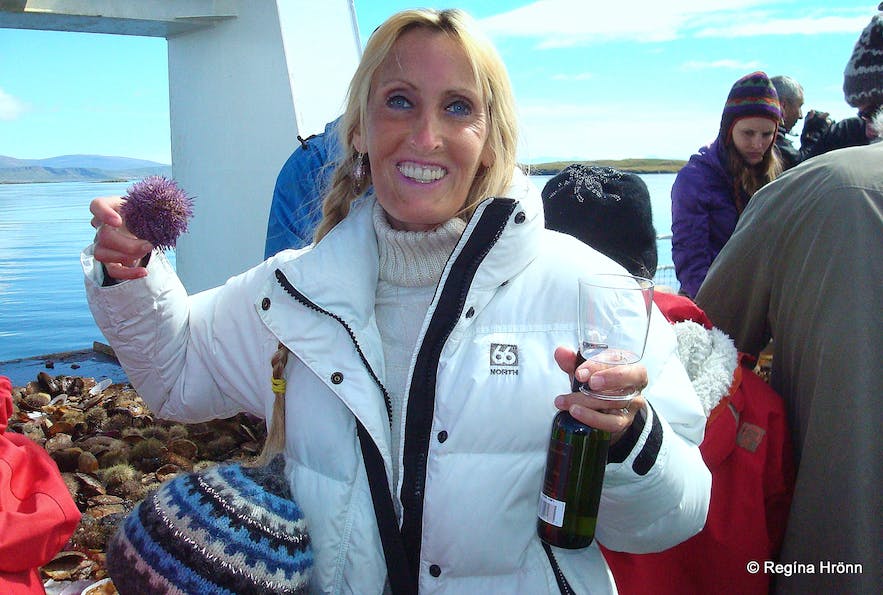 Having a sip of white wine on the tour ;)

This is such a fun tour and we were in luck that the sun was shining all day long. A quite memorable day and when we got back ashore the first thing I said was: "I want to go again" :)

If you want to join this tour then the Viking Sushi Adventure operates all year round.

Have a lovely time sailing on Breiðafjörður fjord :)