Now, this is an extraordinary tour - a visit to the man-made ice cave in Europe's second-largest glacier, Langjökull glacier. The cave opened on June 1st, 2015, and I visited it for the first time on June 11th, 2015!

This is quite an exceptional experience - to walk hundreds of metres inside a glacier into the largest man-made ice cave tunnel in the world!

Top photo: inside the Ice Cave Tunnel in Langjökull Glacier 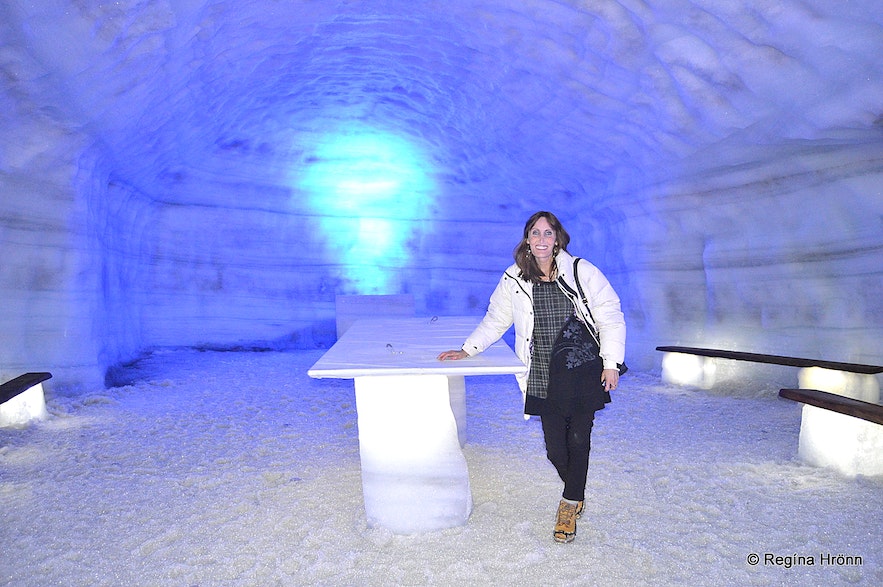 The pick-up for my tour started at 8:30 am, but as I live in Reykjavík then I met up with the Reykjavík Excursions bus at our bus terminal, BSÍ, at 9 am.

On our way to Langjökull ice cave, we passed some beautiful sights and made a few stops on the way. Our first stop was at Deildartunguhver geothermal spring, which provides 180 l/sec of 97° hot water - making it the most powerful geothermal spring in Europe! 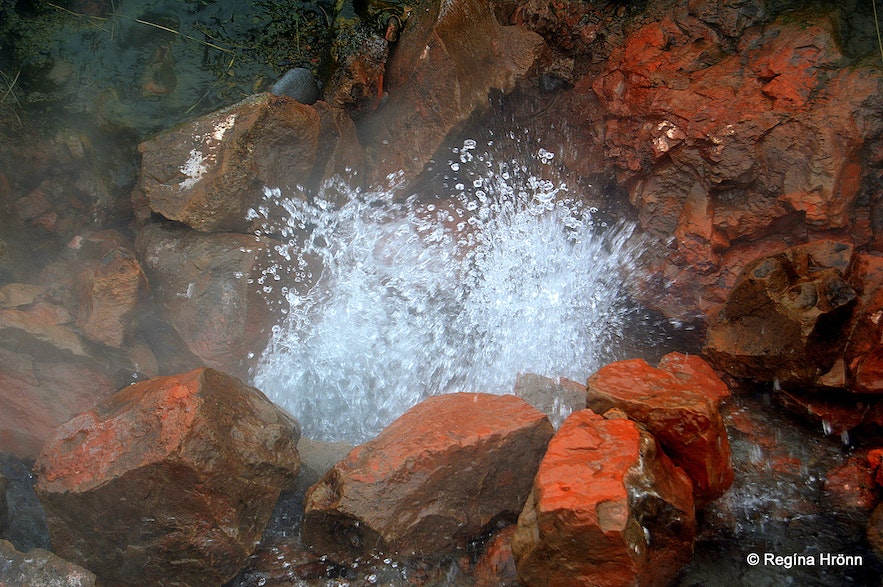 Our next stop was by one of my favourite waterfalls in Iceland, Hraunfossar waterfall or "Lava Falls".  They are almost 1 km wide and consist of countless springs of clear subterranean water, which wells up from underneath the edge of the lava field Hallmundarhraun and runs in falls and rapids into the glacial river Hvítá.

Now we were getting closer to Langjökull glacier as this lava field flowed from an eruption of one of the volcanoes beneath the glacier Langjökull in the year 930. 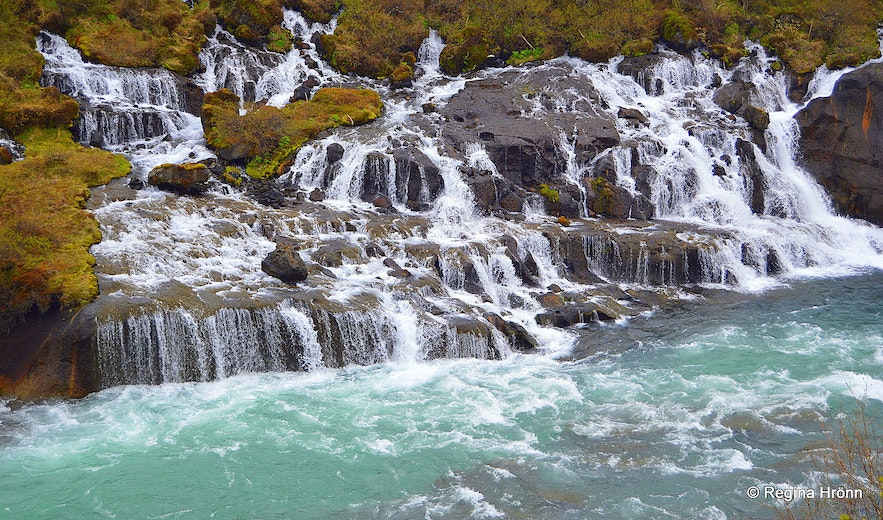 There is another waterfall next to Hraunfossar, called Barnafoss or Children's Falls, as two boys drowned in the falls when they were crossing over on a stone arch.

I have written a special travel-blog about this area: The spectacular Silver Circle of West-Iceland

Now it was time for lunch and we stopped at Húsafell, six km away from the waterfalls, for a buffet at Húsafell bistro.

The buffet is not included in the price of the tour, but most of my fellow passengers got something from the menu. 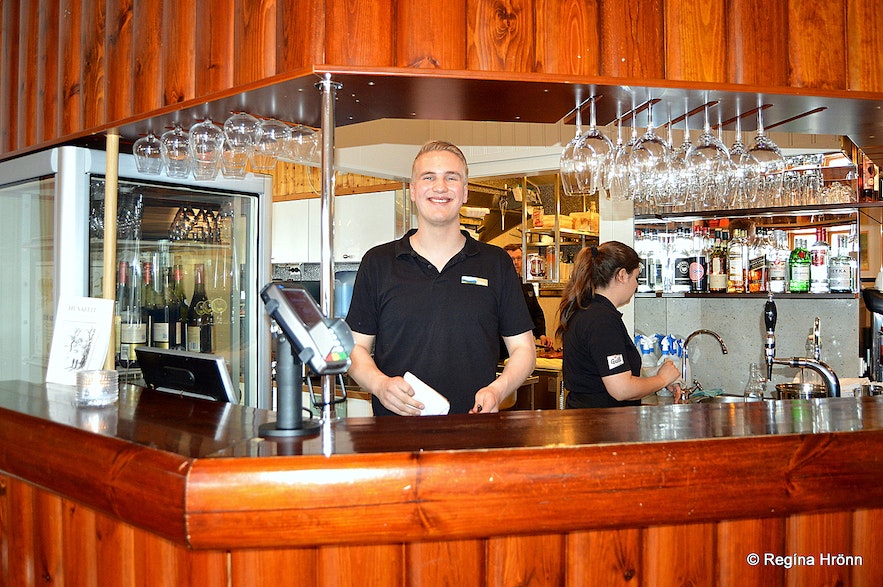 The bus drove us to the edge of the glacier and there we were greeted by this 8-wheel monster glacier truck, a former NATO missile-launcher truck!

I can tell you that it is quite an adventure to sit inside such a truck driving on the second largest glacier in Europe! 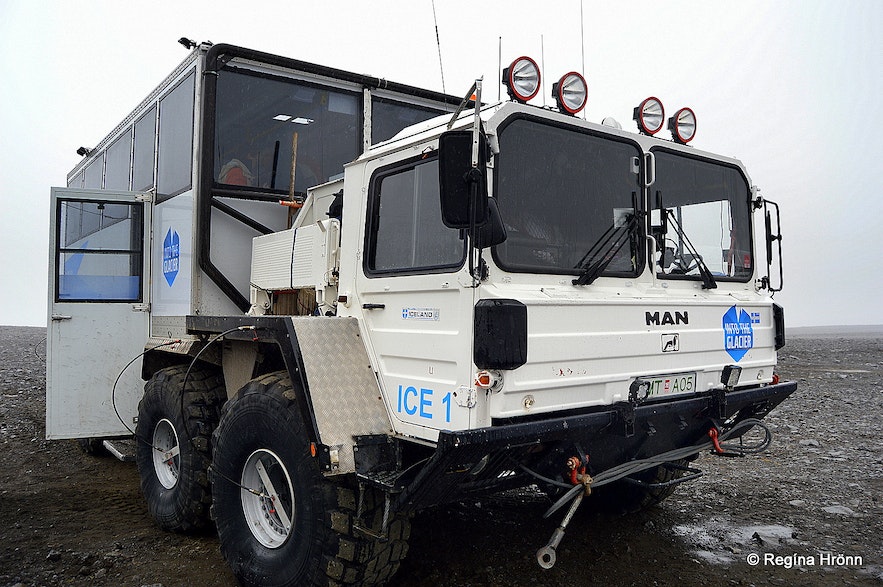 After the 40 minute drive in the monster glacier truck, we finally saw the ice cave tunnel with the sign Into the Glacier. I was so excited to be there.

I had been following up on the building of the ice cave tunnel on the news since the idea for this tunnel was first discussed in 2010 - and I so wanted to see what it looked like on the inside! 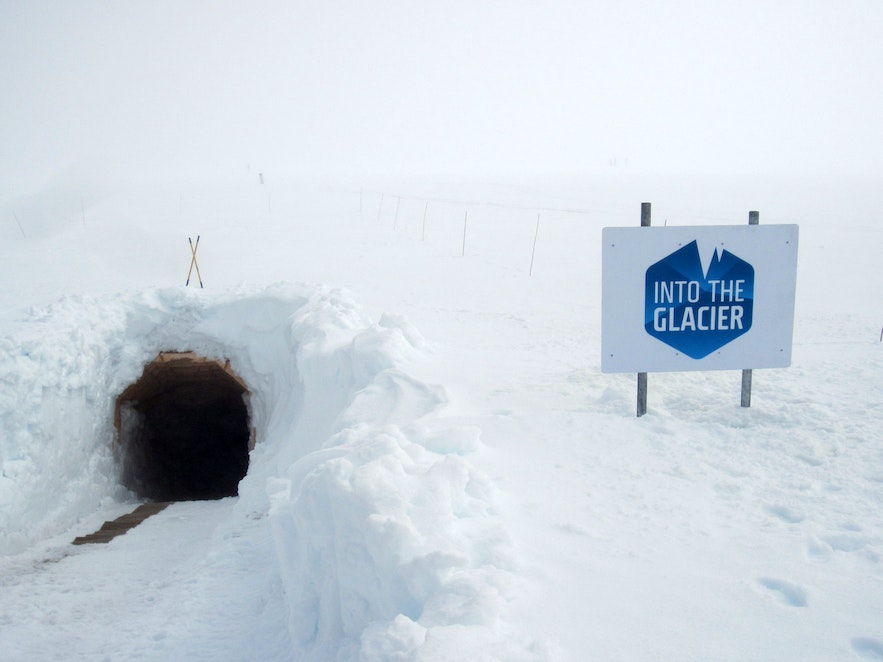 The entrance to the ice cave tunnel

The English-speaking guide divided the tour in two and guided us through the ice cave tunnel.

We first stopped just inside the entrance to get some crampons, which were provided to us for the walk inside the ice cave tunnel. I was glad as even though I was wearing good hiking shoes, then it made all the difference wearing these crampons. As you can see from the photo then I was also wearing thick woolen socks.

Do wear something warm, as it is cold inside the glacier. The walk inside the ice cave tunnel is an easy one on even ground. 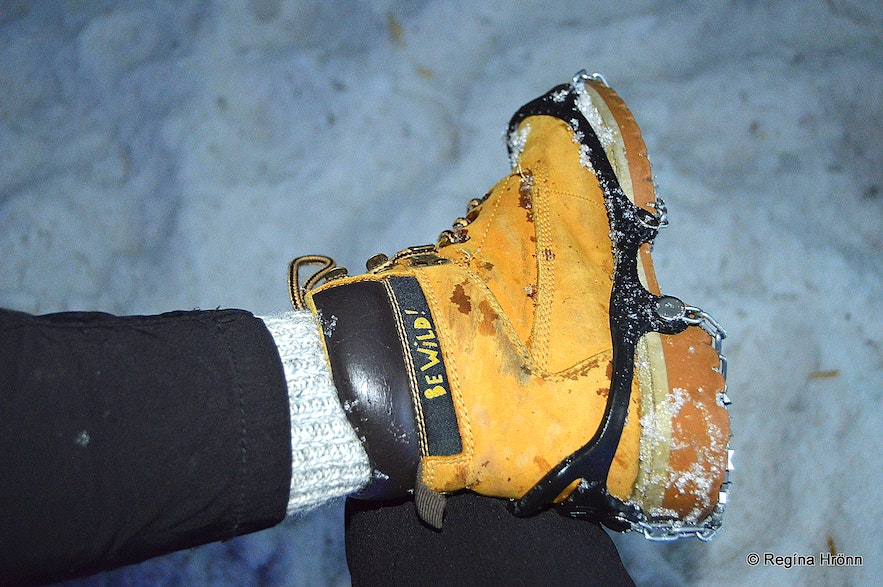 Crampons are needed inside the Ice Cave Tunnel in Langjökull Glacier

I had quite a few "WOW" moments on our 1-hour-tour inside the ice cave tunnel. It is just amazing. There are several chambers lit up with LED lights. The blue and violet colours are out of this world! I couldn't stop taking photos!

And so was everybody else on the tour, we were just taking photos left and right. So I kind of missed what the tour guide was saying. But a picture is worth a thousand words ;) 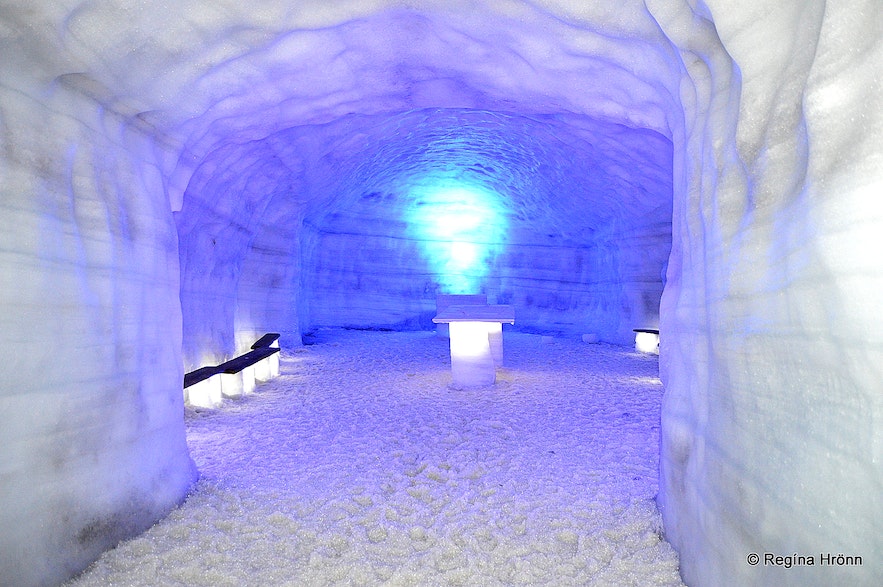 I went on this tour with an American woman, who had contacted me on my travel-blog here on Guide to Iceland.

She was travelling alone and we thought it would be perfect to go visit the ice cave tunnel together so we could take photos of each other ;) 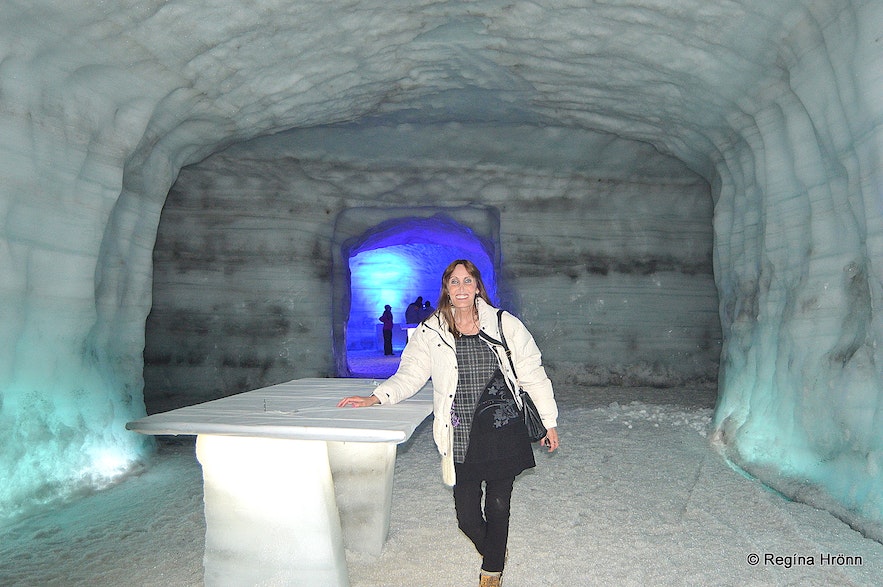 I caught up with the guide in the chapel - imagine, a chapel deep inside a glacier! Here people can get married - now that would be a unique experience in beautiful surroundings - in the heart of Europe's second-largest glacier :)

The digging of the ice cave tunnel took 14 months and 7,000 tonnes of ice was removed! 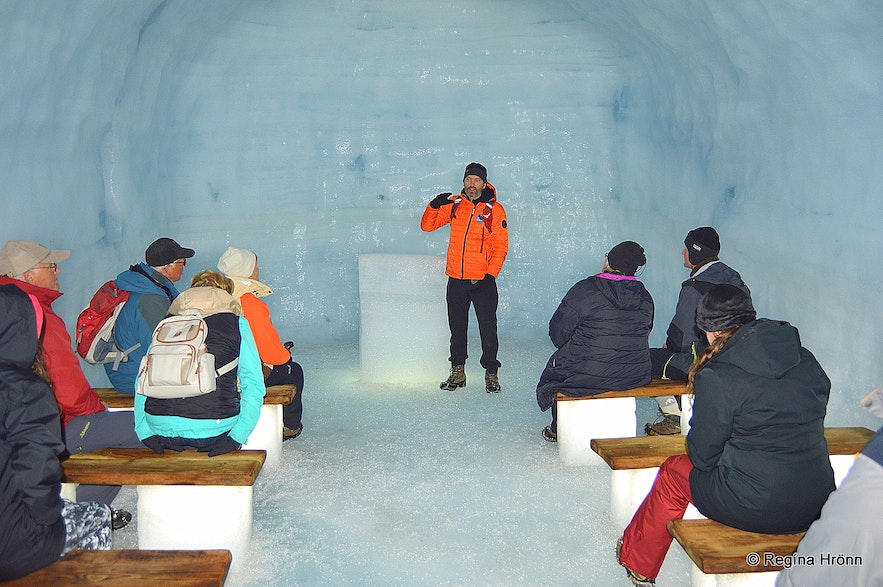 The ice cave tunnel is 550 metres long and reaches 30 metres down into the glacier. There are 5 man-made chambers, beautifully aquamarine in colour.

In several places, you will find information signs on the walls of the tunnel, with information in Icelandic and English on the glacier. 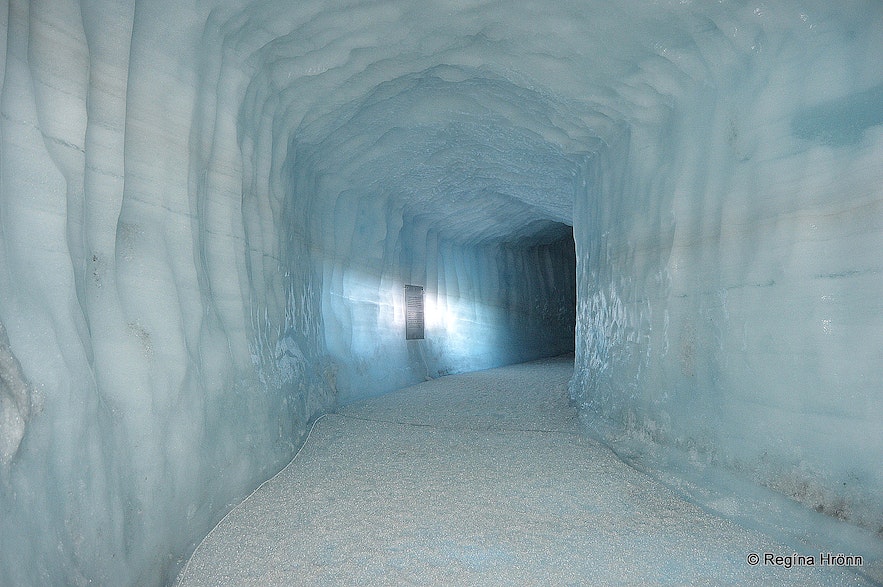 The ice layers of the ice walls show the chronological story of the glacier and each black line shows a volcanic eruption - one can even see ash from the Eyjafjallajökull volcanic eruption here - the volcano which caused such havoc in air transport!

In one spot the tunnels were so narrow that I could reach both sides with stretched-out hands! Behind me in the photo, there was a hole in the ice tunnel where we could look inside the glacier outside of the tunnel. 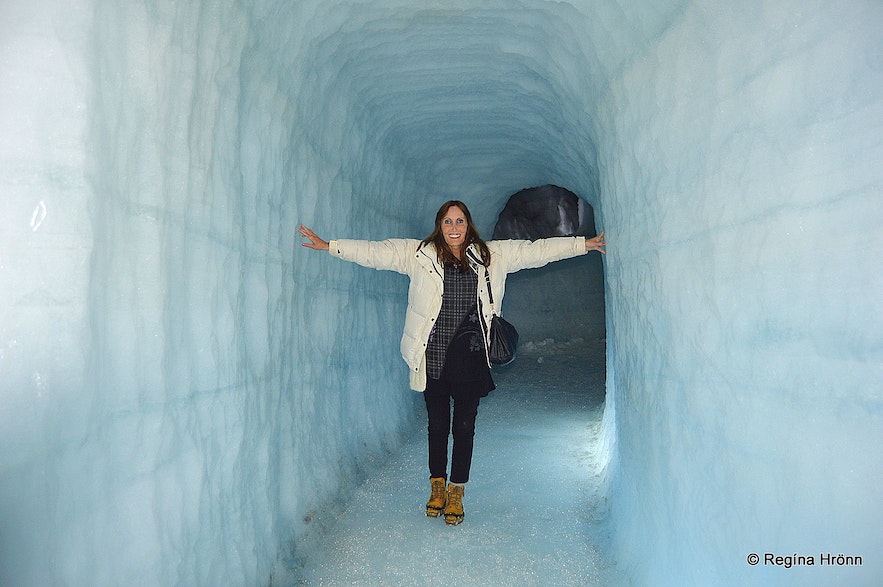 Don't worry if you are claustrophobic, the tunnel is wide enough and you don't have to enter this side tunnel.

Looking into the hole in the ice cave tunnel was quite eye-opening.

I had kind of got used to walking in the tunnel and when I looked into the hole or window, as it were, it made me realize that I was actually deep inside a glacier! 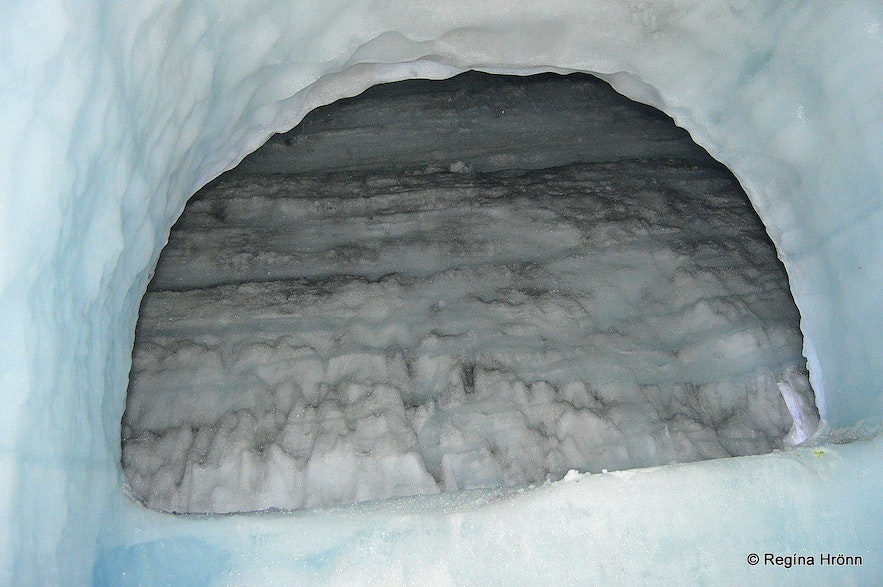 Inside the Ice Cave Tunnel in Langjökull Glacier - the hole

In another place, we walked onto a timber bridge and stood in the middle of 40-metre deep crevasse - all beautifully lit up with icicles.

It was both scary and extremely beautiful. These crevasses are so dangerous, that is why people are not allowed to walk on the glaciers without a guide. There have been fatal accidents on Langjökull glacier, where people have been killed when falling into a crevasse on the glacier. And standing in the middle of a crevasse deep inside the glacier was surreal. 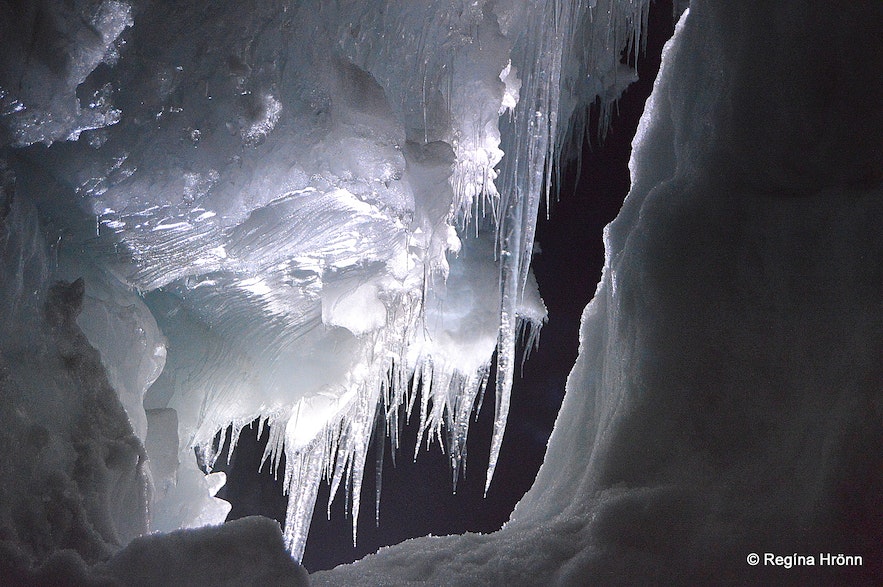 Inside the Ice Cave Tunnel in Langjökull Glacier - the crevasse

It is cold inside the ice cave tunnel, so dress warmly and bring a hat, a scarf, woolen socks, and fingerless gloves, as I am sure you will want to take tons of photos as I did. And bring sunglasses as well as you will be blinded by the reflection from the glacier when you exit the ice cave tunnel.

We didn't know about this and we could not open our eyes when we got out of the cave and it took us a while to get back to normal. 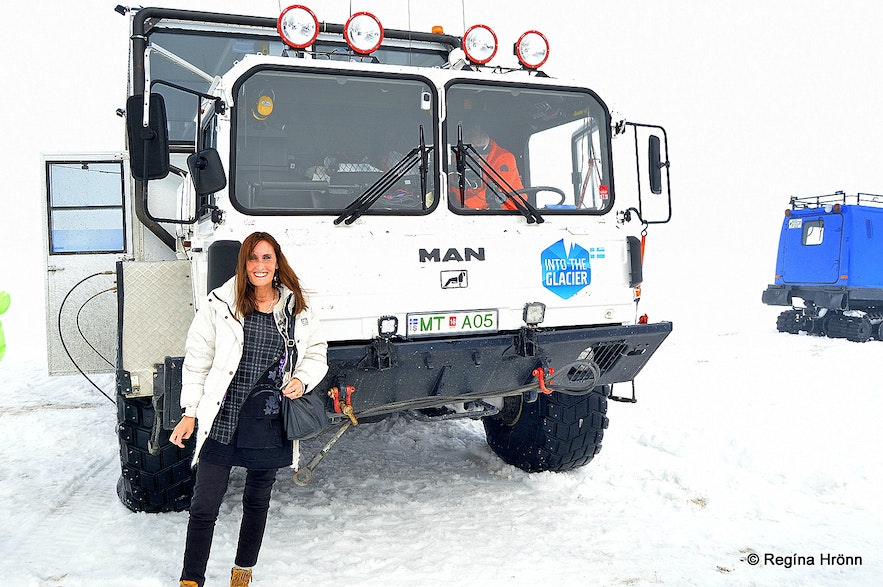 Since the glaciers are moving all the time it is not known for how long the ice cave tunnel is going to last. But it is presumed that it will last for at least 10 years with maintenance. To make the most of your trip you can join several tours f.ex:

Into the Glacier with Lava Caving

Have a lovely time at Langjökull glacier :)