Icelandic folklore contains a myriad of stories of encounters with the elves, who live with us here in Iceland. I found an interesting story on one such encounter in Þjóðsögur Jóns Árnasonar - the Collection of Folklore by Jón Árnason, and translated it into English.

The story, which is called Álfkona reidd  yfir á - an Elf Woman catches a Ride across a River, happened in Bárðardalur valley in North-Iceland, but the 41 km long Bárðadalur valley is best-known to travellers for the historical Goðafoss - and for leading to the extraordinary Aldeyjarfoss waterfall. 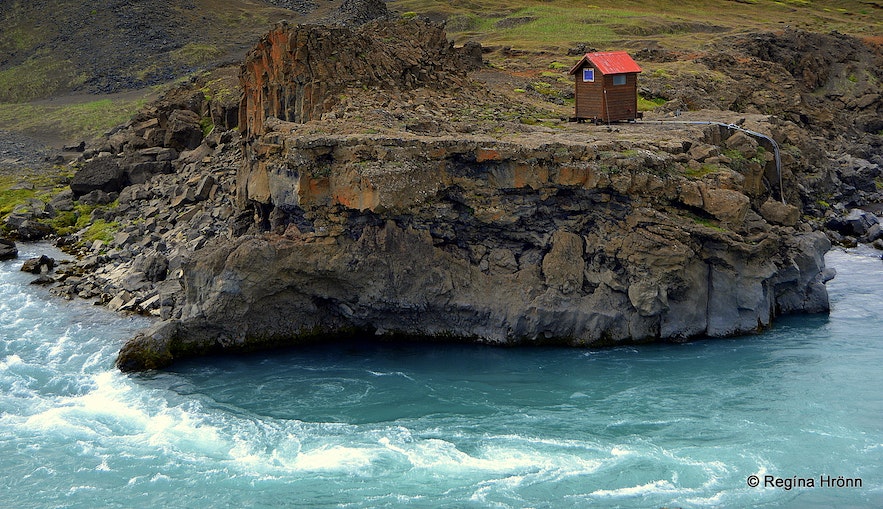 Later that same day, a girl was seen on the riverbed opposite Halldórsstaðir farm around the time that the girl was expected back from collecting the moss, and the inhabitants of the farm could hear her shouting across the river.

It had been agreed upon that if the girl returning from her moss collecting would stand on the riverbed and shout then she should be picked up on horseback. 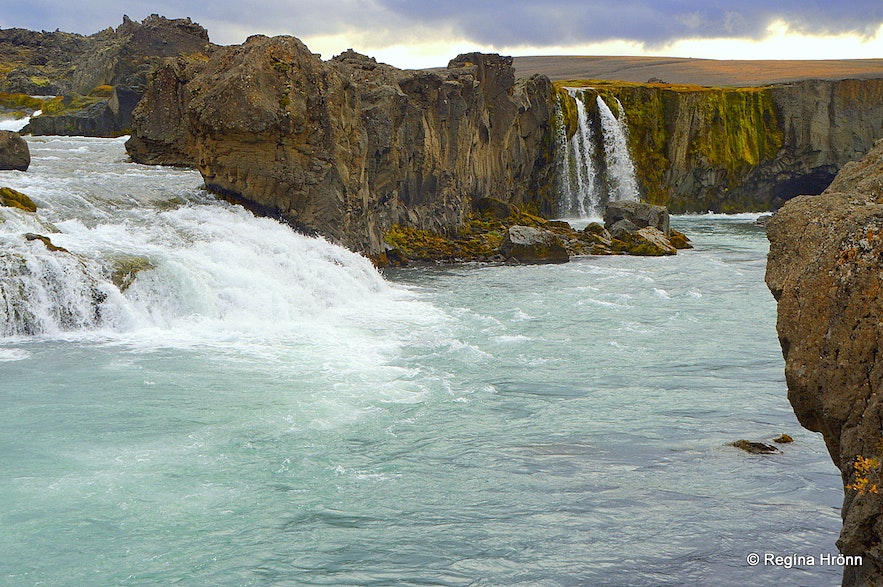 When the inhabitants of Halldórsstaðir farm saw this girl by the river they thought they recognized the moss collecting girl. They sent a woman brave enough to cross the glacial river on a horse while leading another horse by the reins.

The woman rode towards the ford in the river while keeping an eye on the girl on the opposite side of the river, which she believed was the moss collecting girl. 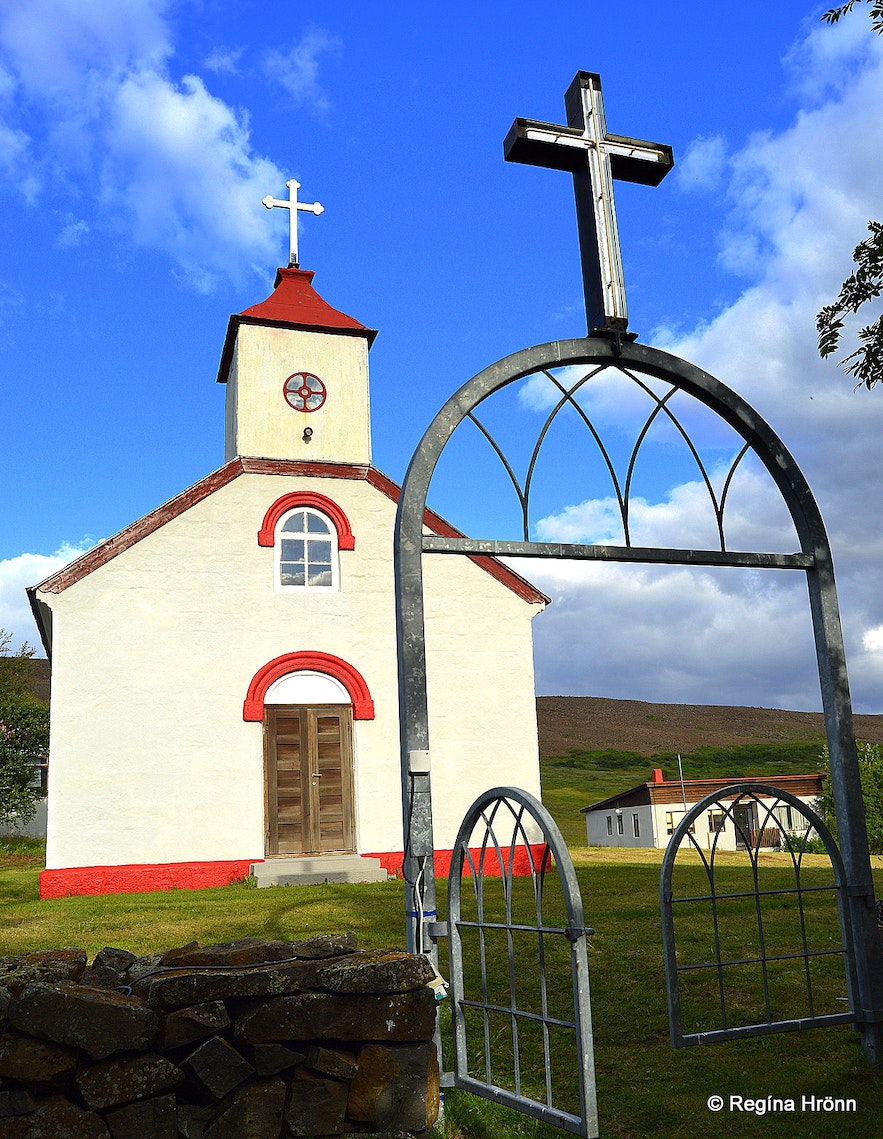 No matter how hard the woman looked in all directions she couldn't find the girl. So she rode to Lundarbrekka farm (on the east side of river RHR) to ask if the moss collecting girl had stopped by at that farm. The inhabitants told her that the girl was still collecting  Iceland moss on the heath!

When the woman realized that all her searching and bother had been in vain she returned back home, most astounded by her delusion. But that same night as she was asleep she dreamt that an elf woman approached her and most humbly thanked her for allowing her to ride with her across the river.

The elf woman apologized for the inconvenience but explained that she had been in a great hurry to cross the river and reach the west bank. The elf woman said that she lived at one of the small farms of the elves on the Lundarbrekka land. 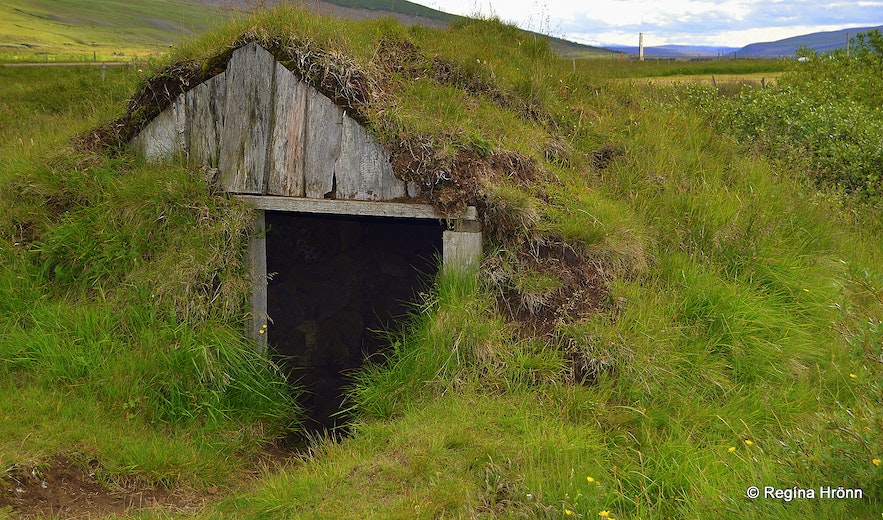 The elf woman had given birth to an illegitimate child and her father had been so angry with her and was so mean towards her, that she couldn't stay at home any longer and had to flee to her elf relatives at Sexhólagil - in front of Stóruvellir.

Sexhólagil canyon - the rock in the middle is called Karl. It was apparently mounted by the Viking Grettir the Strong

Many such encounters with the elves have been recorded - they either choose to make themselves visible to us humans or visit us in their dreams. Psychic people tend to see them.

Some of them seem to live and work beside us, as in some folklore they have farms and some farm animals, mainly cows and horses.

Always show respect and speak in a soft voice around elf-locations, as the elves don't like racket or disrespect. 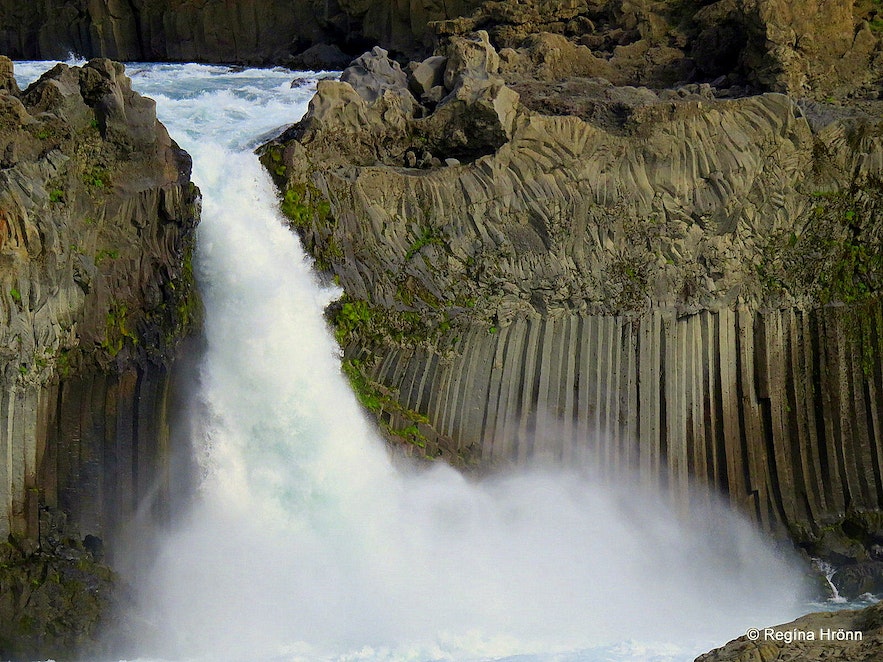 In some stories, humans and elves help each other while other elf stories tell us of their wrath and revenge. Other accounts tell us about gifts from the elves, f.ex. the beautiful elf woman's cloth on display at the Culture House in Reykjavík, which I tell you about in my travel-blog about Bustarfell.

Check out: The Sheriff's Wife at Burstarfell and the Elf-Rock in East-Iceland - an Icelandic Folklore

I love such stories of the elves of Iceland and have written many travel-blogs with stories I have found in Jón Árnason's collection of folklore - all 5 volumes. I think that if you read the stories with photos from the locations where they happened, they become much more vivid.

All my photos are taken in Bárðardalur valley and by Skjálfandafljót river. 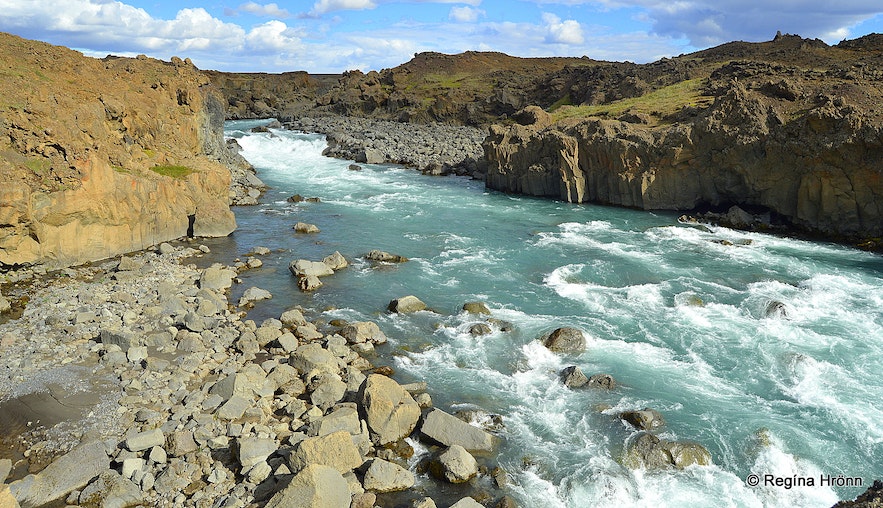 Lundarbrekka is a historical farm - it was the home of the settler of Bárðardalur valley, the Viking Bárður Heyangurs-Bjarnason, and the valley is named after him.

The river which the women crossed on horseback is the powdery blue glacial and spring river Skjálfandafljót, Iceland's 4th longest river - some 180 km long. It originates in Iceland's largest glacier, Vatnajökull, and runs its course into Skjálfandaflói bay.

This long river forms some of the most beautiful waterfalls in Iceland, Hrafnabjargafoss, Aldeyjarfoss, and Goðafoss. 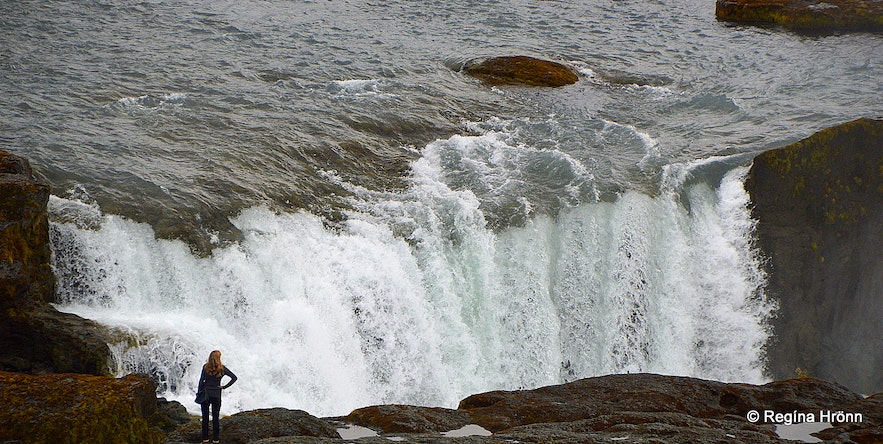 Another river close to Lundarbrekka is called Svartá - Black River. It is a spring-fed river and forms Ullarfoss waterfall. Seeing that many spring-fed rivers run into this massive glacial river then salmon can be caught in it up to 40 km from the mouth of the river.

Of the 3 waterfalls, Goðafoss is closest to the main road. It is a beautiful waterfall, very easily accessible and as such very popular. Its name means the Waterfall of the Gods. 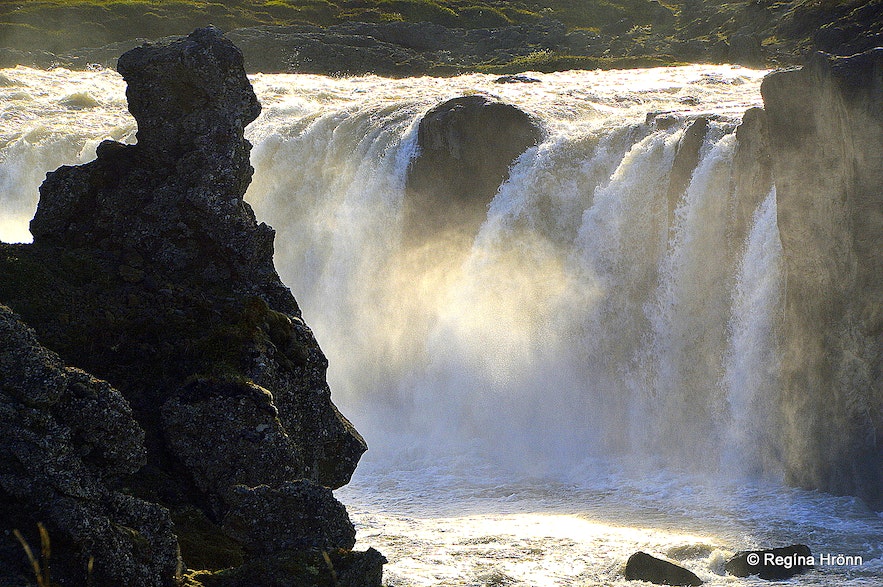 The story goes that at the time of the conversion to Christianity back in the year 1000 the Lawspeaker Þorgeir Ljósvetningagoði threw his idols of the old pagan Nordic gods into this waterfall after returning from the Alþingi Parliament at Þingvellir.

I have not been able to find any old source for this story, but it is a common belief.

To visit North-Iceland, Bárðardalur, and the waterfalls you can rent a car in Reykjavík and drive for some 422 km with many stops on the way. Goðafoss is by ring road 1, but to visit the other waterfalls you drive to the end of Bárðardalur valley - some 41 km. A 4x4 is needed for Hrafnabjargafoss.

Have a wonderful time in Bárðardalur valley :)