I went on a truly memorable 14-hour guided tour of the highland of Iceland. Our destination was Askja caldera and the Víti explosion crater. There had been an earthquake and landslide in July by Askja and the water level of Lake Askja was now 2 meters higher than before.

We drove from Akureyri town towards Mývatn at 6:30 in the morning and picked up more passengers there. We then headed straight towards the highland, got off ring-road 1, and onto the mountain road F-88.

Our first stop was at Hrossaborg, which is a 10,000-year-old crater in the shape of an amphitheater. Our driver drove straight into the crater, got out, and let some air off the tires (33 psi to 15 psi) to give the tires a wider grip. This is also done when we drive our jeeps up on the glaciers.

We were now ready to drive into the highland of Iceland. The gravel roads here are bumpy and there are several rivers to be crossed. Our guide was well trained in crossing rivers having driven on this tour countless times, but jeeps often get stuck in the middle of the rivers and have to be towed out.

The landscape in the highland is barren and lunar-like and at Askja NASA trained Apollo astronauts in 1967.

Our guide walked with us up to Eyvindarkofi or the Shelter of Fjalla-Eyvindur, which is the remaining shelter of one of our best-known outlaws, Fjalla-Eyvindur (Eyvindur of the Mountains) who lived here in 1774-1775. Fjalla-Eyvindur was an outlaw for 20 years and lived in the wilderness with his wife, Halla.

I have visited more of his hiding places in Iceland and it always surprises me how these outlaws were able to survive the cold Icelandic winters.

See also: Hveravellir - the beautiful Oasis in the Highland of Iceland 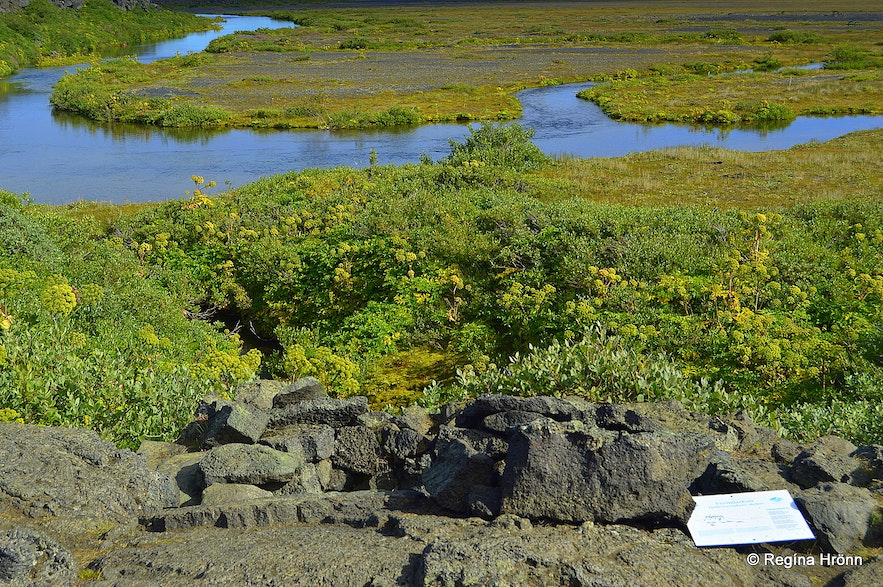 According to Fjalla-Eyvindur this year of his hiding was the worst he experienced during his years as an outlaw. It was dreadfully cold and he didn't have any fire to keep him warm and had to live on raw horse meat. But here he had clear water, as in this oasis clear water comes straight from the lava. 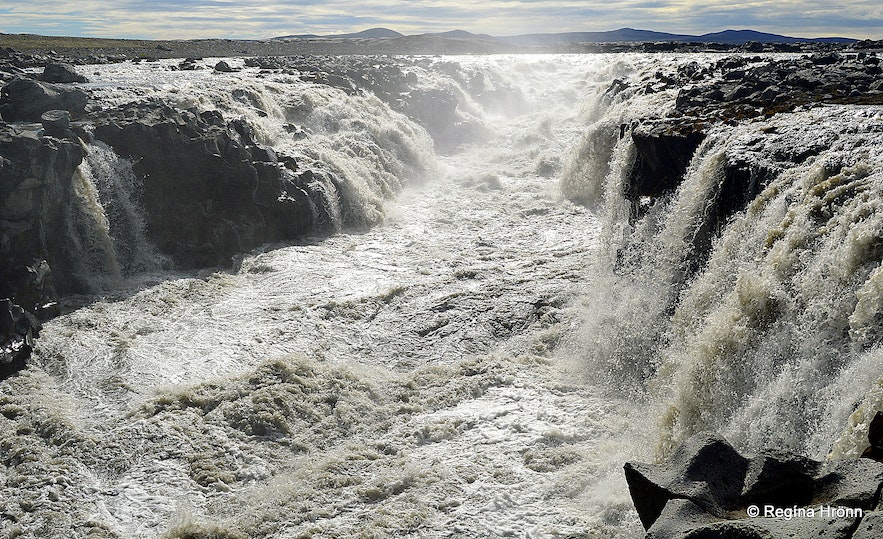 Our next stop was by the small waterfall, Gljúfrasmiður falls, in the glacial river Jökulsá á Fjöllum, which is the second-longest river in Iceland (206 km). Jökulsá á Fjöllum means the Glacial River in the Mountains.

Further north the glacial river creates the most powerful waterfall in Iceland, Dettifoss waterfall, plus several other smaller waterfalls. The river is so powerful that I felt sudden fear standing so close to it. 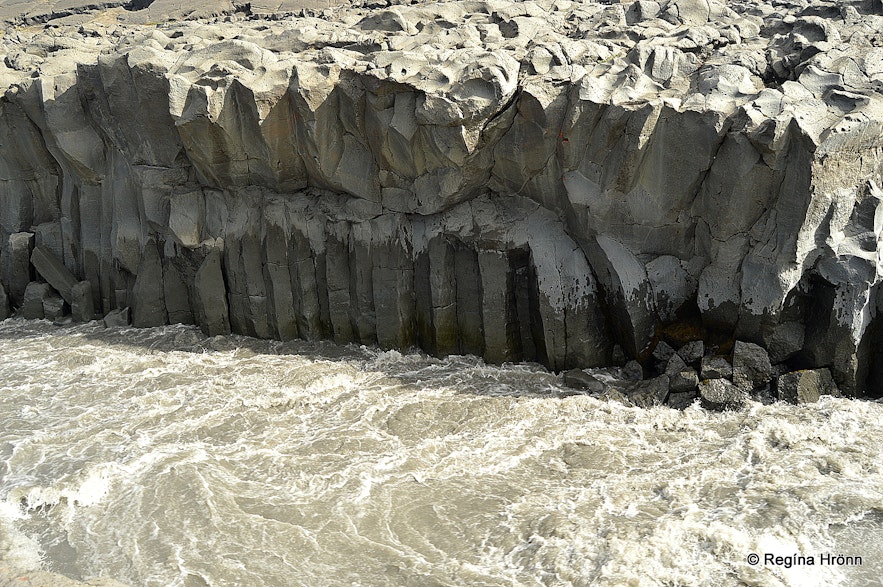 I took a video of it, just to remember how powerful this glacial river really is. Jökulsá á Fjöllum has been in the news a lot lately as we feared that a volcanic eruption was about to take place in Bárðarbunga, a major volcano in the Vatnajökull glacier.

If that were to happen there would be massive floods in Jökulsá á Fjöllum, which will create chaos in this area and further north.

We now drove for an hour through the wilderness on a winding, bumpy road. After driving through the very grey landscape it all of a sudden changed and turned yellow. We had now entered the part of the highland called Vikrahraun or Tephra lava from a lava flow back in 1961.

The landscape was covered in yellow tephra.  And black lava was sticking up from all the tephra, quite scenic.

The driver stopped and let us out to touch the tephra. It is amazingly light. While standing there I felt such strong ties to my country. I had been travelling for 3 weeks and seen all kinds of beautiful landscapes, but in the vast wilderness of my country I felt this strong connection and said to myself: "Now, THIS is Iceland". 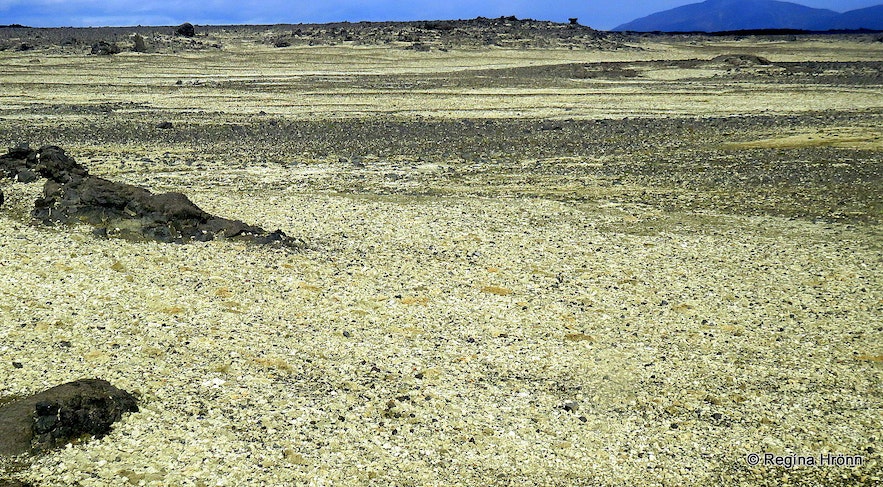 Now we were getting close to our destination and our next stop was at the amazing Drekagil- Dragon Canyon by Dyngjufjöll mountains, where we stopped to have lunch in one of the huts there.

Due to the heavy rain, the rivers had flooded and we couldn't hike into the canyon, as was planned. But our guide told us about the waterfall and the two dragons in the canyon, from which the canyon draws its name. 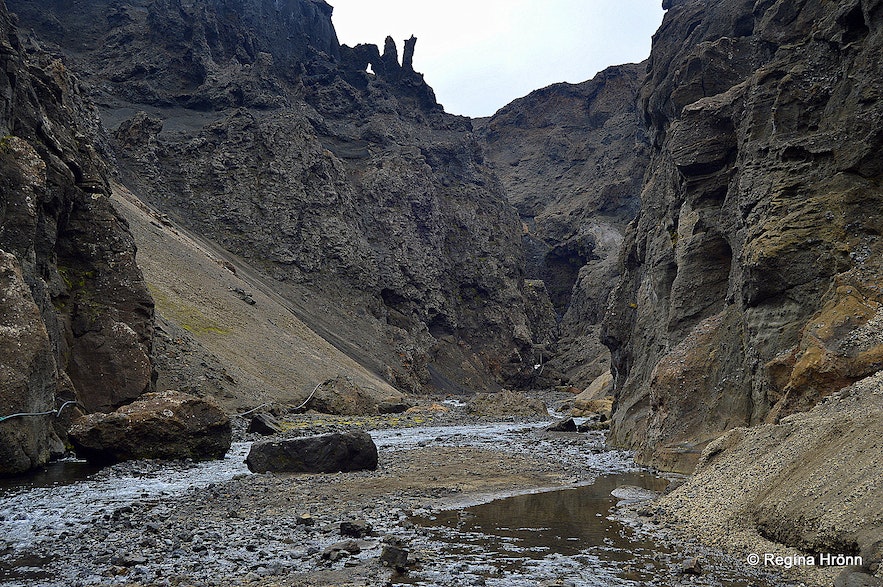 There is a hut by Drekagil canyon, called Dreki, with sleeping accommodation. If you plan on staying there remember to bring food as there is no food for sale there.

We left one of the passengers, who travelled with us on this tour, at Dreki and he was planning on staying there for a couple of days.

After having lunch at the smaller hut by Dreki, we drove to Askja, which is only 8 km away from Drekagil canyon, and left the jeep by the parking lot. The hike to Lake Askja and Víti explosion crater is an easy one, about 30 minutes long.

When we visited there was still a field of snow on the path. 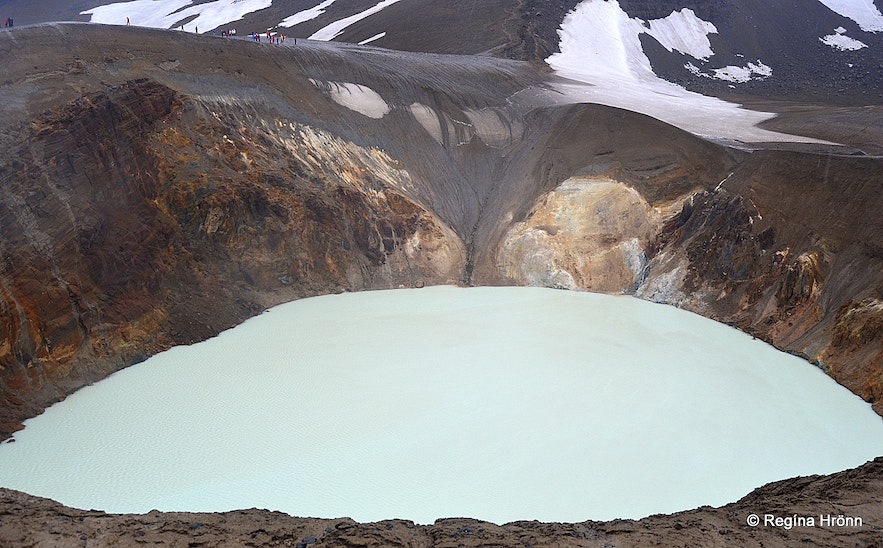 When I finally laid my eyes on the Víti explosion crater I was in awe. The big crater of Víti with its whitish opaque blue water is like out of this world. The crater is 150 meters in diameter and in it is a 25-30 degrees C hot geothermal, sulfurous lake, in which one can bathe.

There had been an earthquake and landslide by Askja on July 21st, with a wave estimated to have been as high as 50 meters with water from Lake Askja flowing into the Víti explosion crater.

This resulted in the water level of Lake Askja now being 2 meters higher than before. When we visited it was not allowed to go for a swim in the crater. 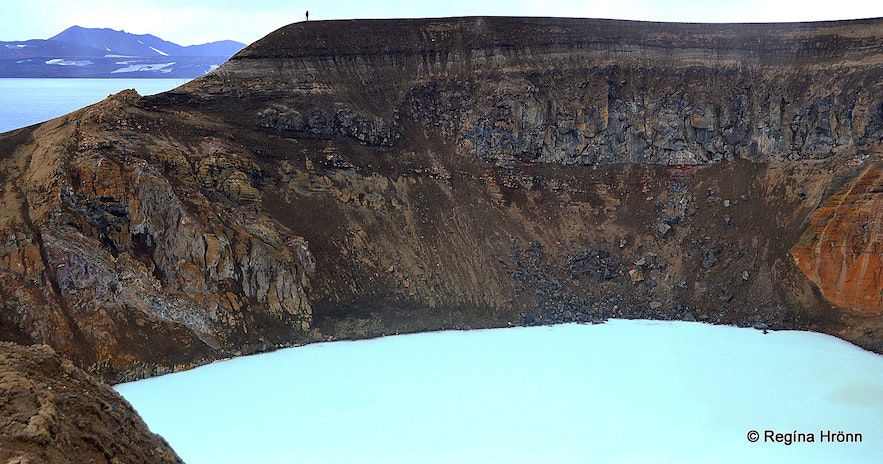 Too bad, as I had been looking forward to that and was wearing a swimsuit underneath my clothes. Hopefully, on my next visit, I will be able to go for a swim in the Víti explosion crater. 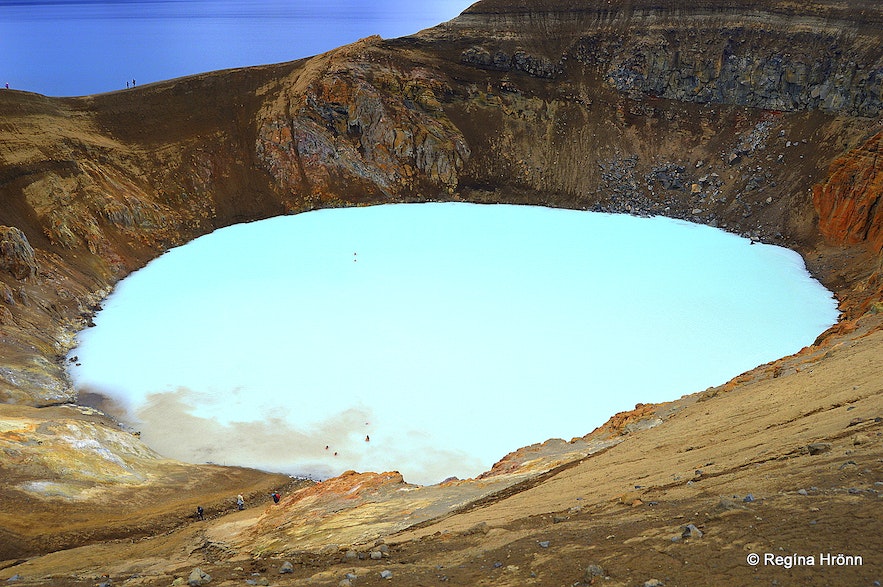 Lake Askja is situated in the crater of Askja volcano and is the second deepest lake in Iceland (220 m). We got such heavy rain on this tour that my photos don't do this beautiful place justice.

So I am going to add a photo from my last trip to Askja here above. You can see that by that time people were swimming in the Víti crater.

You will find a monument by Askja, erected in memory of the German scientists Walter von Knebel and Max Rudloff, who visited Askja in 1907 to study the area. 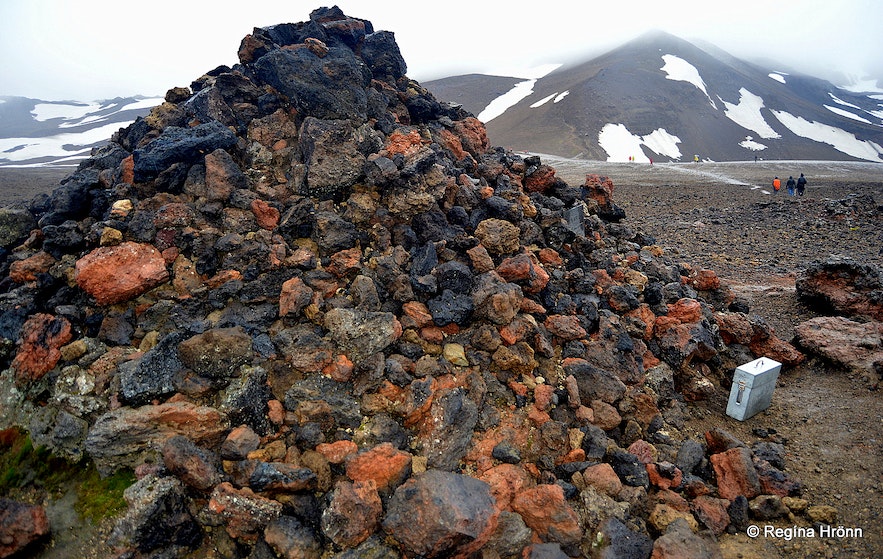 During their explorations of this area, they went in a small boat on Lake Askja to explore the lake and disappeared. It was like the earth had swallowed them up. 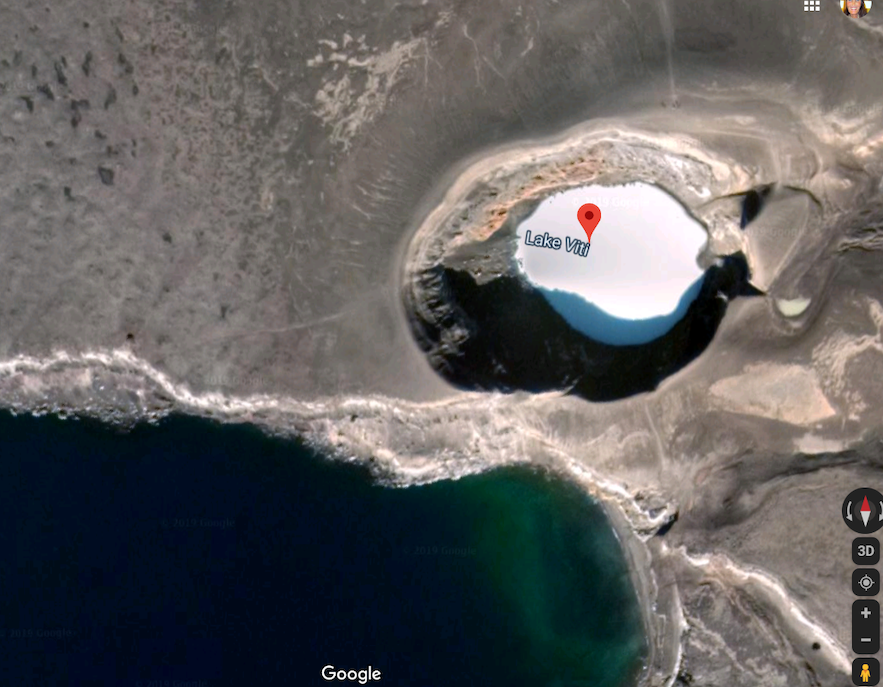 We spent an hour by Askja and then headed back. We took a different route back, crossed Jökulsá á Fjöllum glacial river on a bridge by Upptyppingar, and made a stop at Fjallakaffi - Mountain Café in Möðrudalur, which is the highest located settlement in Iceland. 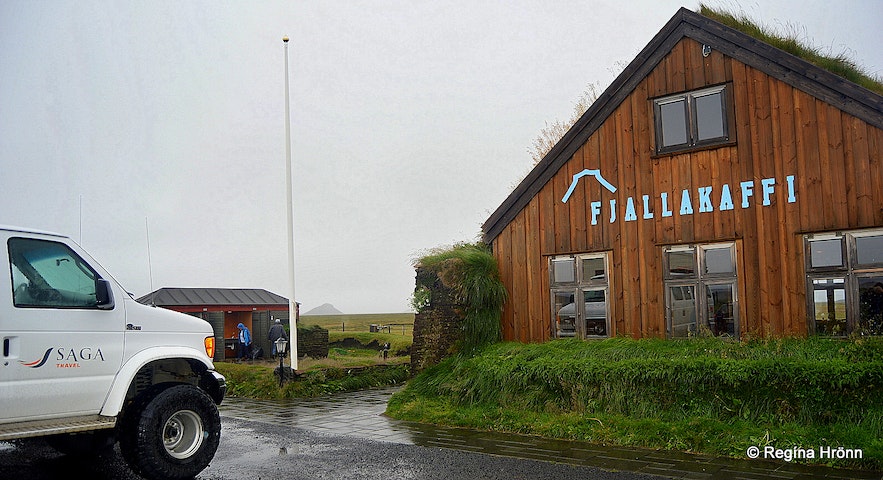 As Askja is only accessible during the summer months and had been closed due to the landslide, I was in luck to have been able to visit it early in August.

Then it was closed again because of the volcanic eruption which lasted for 6 months. 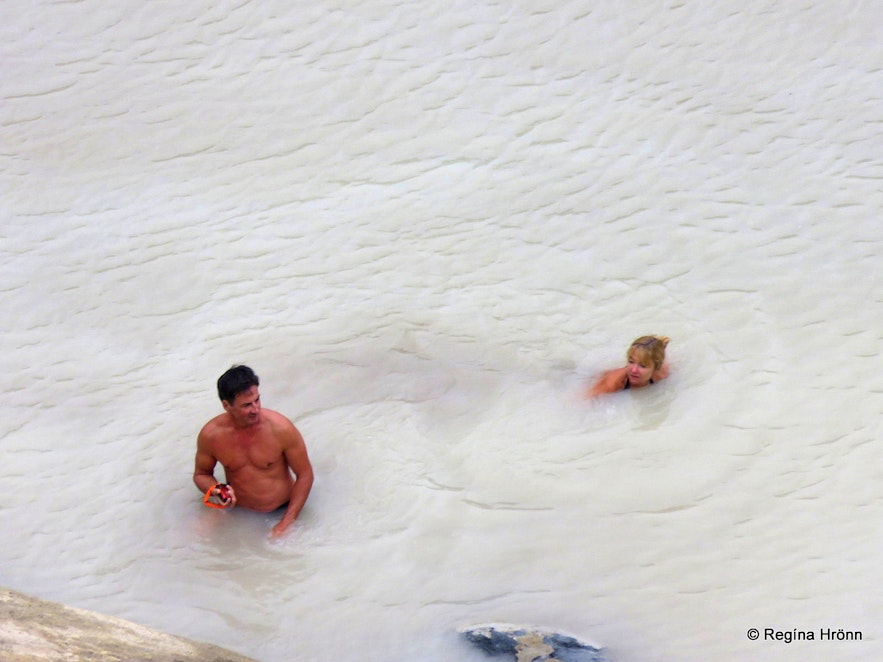 In August 2016 I visited this area again and now a new location has been added, Holuhraun lava field, where you can walk on the new lava.

You can read about it in my travel-blog An Amazing Tour to Askja and Holuhraun Lava Field in the Highland of Iceland.

We got much better weather on that tour and people were allowed to bathe in Víti crater.