Borgarvirki - the Citadel is a columnar basalt fortress and a volcanic plug on the Vatnsnes peninsula in northwest Iceland. It is 10-15 m high and 177 meters above sea level.

It might have been used as an old Viking fortress, at least some legends claim that it was, but we don't know this for sure. 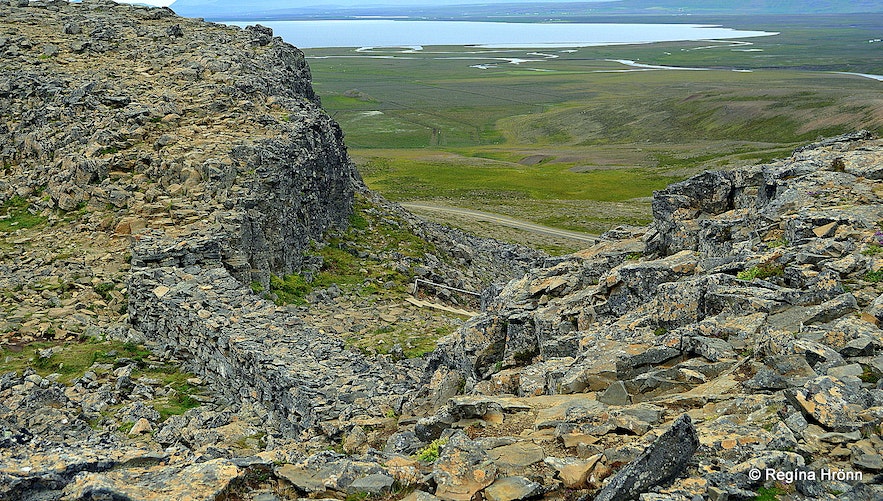 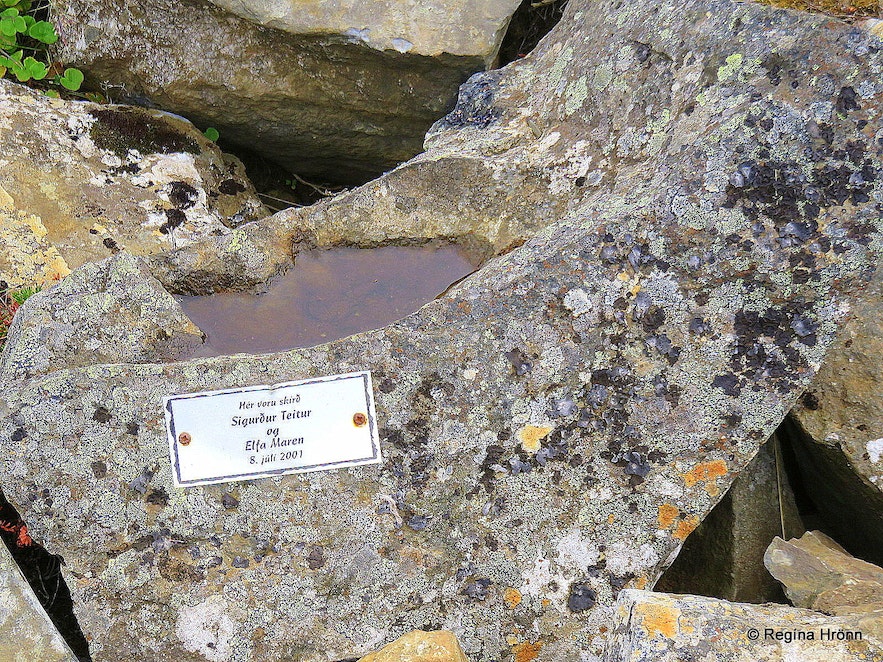 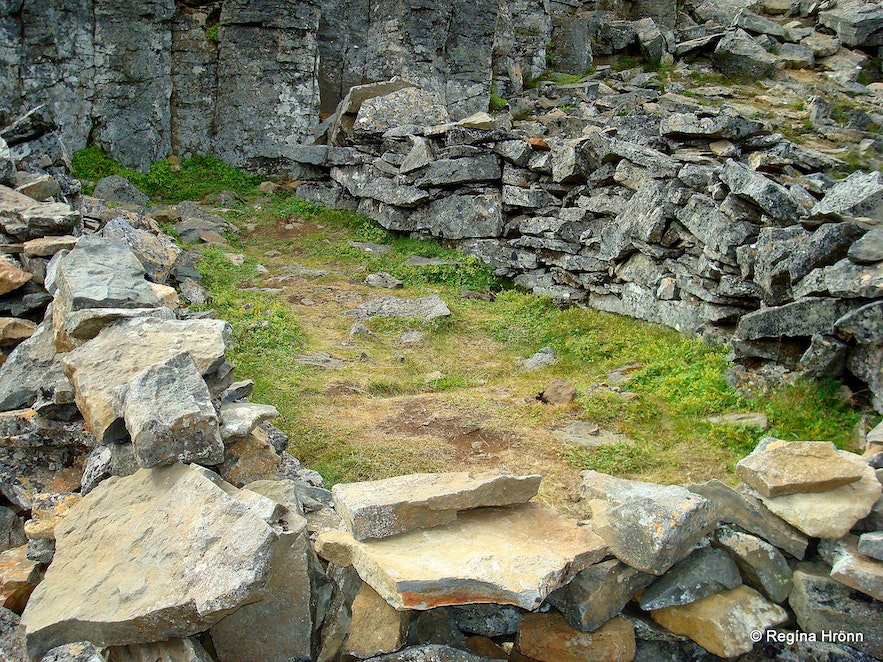 According to Þjóðsögur Jóns Árnasonar - the Collection of Folklore of Jón Árnason, which I refer to very often in my travel-blogs, the people of this area, Húnavatn district, used Borgarvirki as a defense when the chieftains of Borgarfjörður attacked them in the 11th century.

This was during the Heiðarvíga killings.

The Heiðarvíga Saga and the only copy of it burnt in a tragic fire in 1728 in Copenhagen, where many valuable manuscripts were lost. 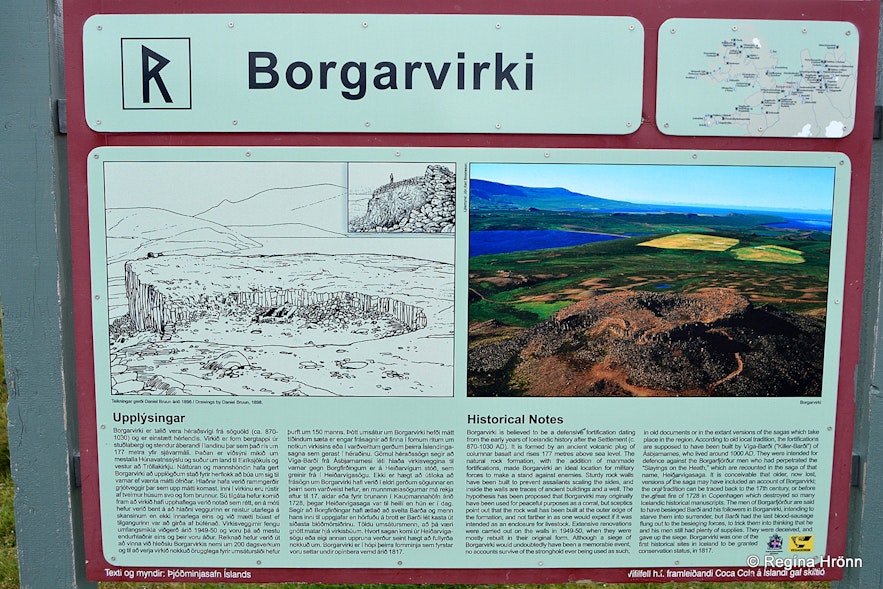 The scholar Jón Ólafsson from Grunnavík, rewrote parts of the Heiðarvíga Saga from memory, but he had copied Heiðarvíga Saga more than a year earlier from an old manuscript.

I have read the Heiðarvíga Saga and it is an interesting story about both Víga-Styr from the Snæfellsnes peninsula and Víga-Barði from Vatnsnes. Víga-Barði was the grandson of Ólafur pá from the Laxdæla Saga and the great-grandson of Egill Skallagrímsson from the Saga of Egill.

This legend of the Borgarvirki fortress might have been in an older version of the Heiðarvíga Saga, we don't know, so it stays a legend.

According to the legend, which I found in Þjóðsögur Jóns Árnasonar - the Collection of Folklore of Jón Árnason, the people of the Húnavatn district were under siege and the attacker's strategy was to starve them out.

On one occasion they had run out of food. 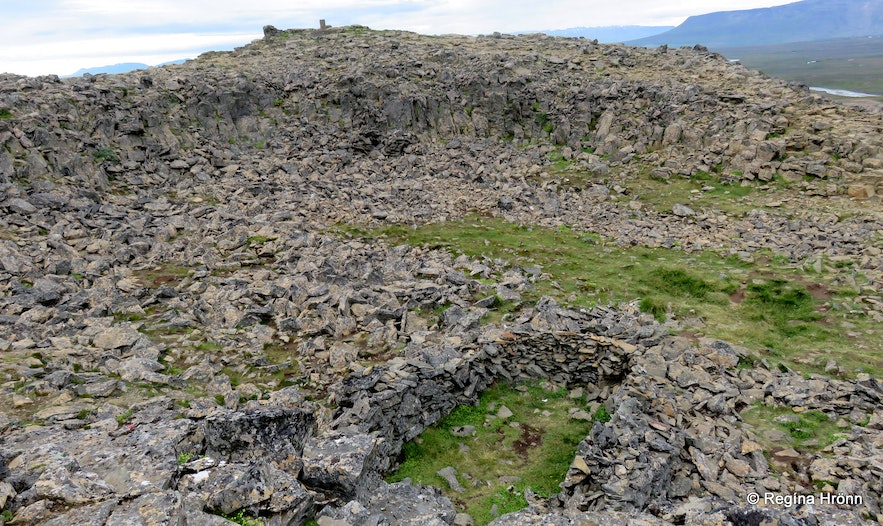 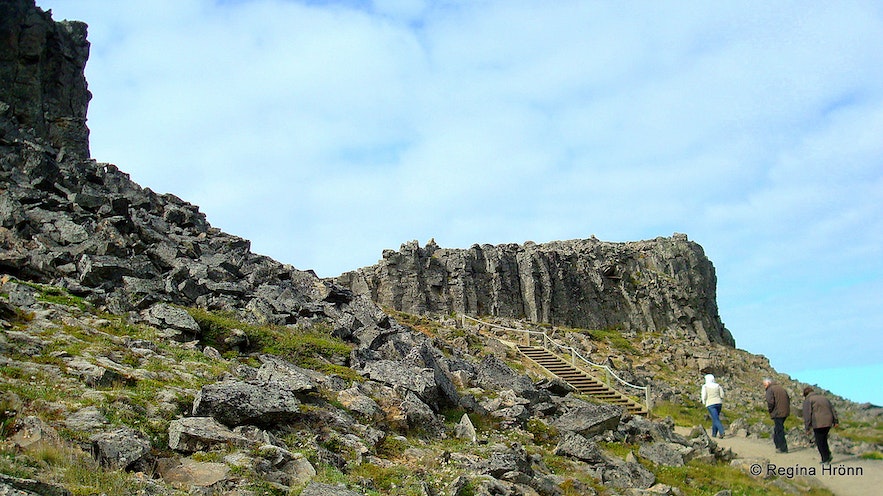 The fortress is 200 fathoms in perimeter with a great view and the fortress can be seen from afar. Inside the fortress are a small grassy dell and a wellspring. Ruins of small huts can still be seen.

Seeing that nobody seems to know for sure who built this fortress, i.e. the parts which have been stacked, those who have written about the fortress guess that it might have been Finnbogi rammi, while he was living at Borg. 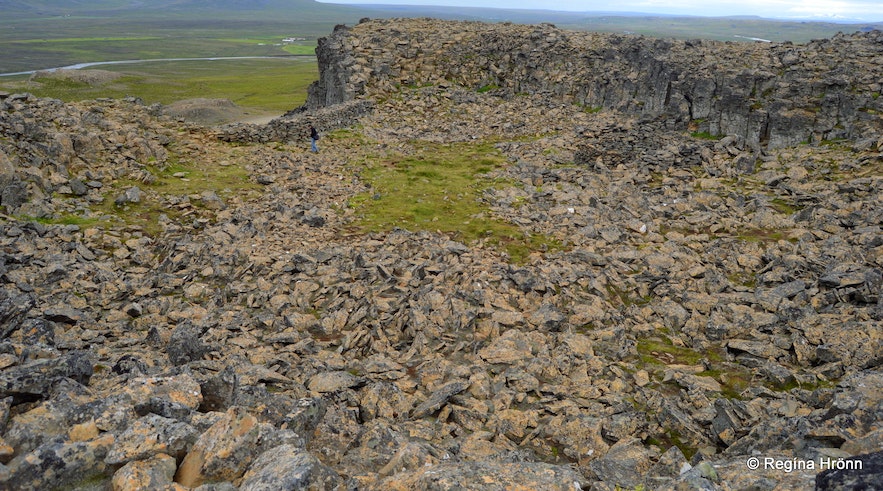 Or it might have been Barði Guðmundsson (Víga-Barði) from Ásbjarnarnes who built it as a defense for himself and his men against the Borgfirðingar (people from Borgarfjörður) after Heiðarvígin killings.

Unfortunately, parts of Heiðarvíga Saga are missing and no perfect copy is available to prove this. This story might have been told in an older version of the Heiðarvíga Saga.

But folklore, both new and old, at least from the days of Páll Vídalín and to this day, straight out tells us that Barði, which usually is called Víga-Barði, and his men built Borgarvirki.

The folklore warrants that this has been written and should be written in Heiðarvíga Saga. 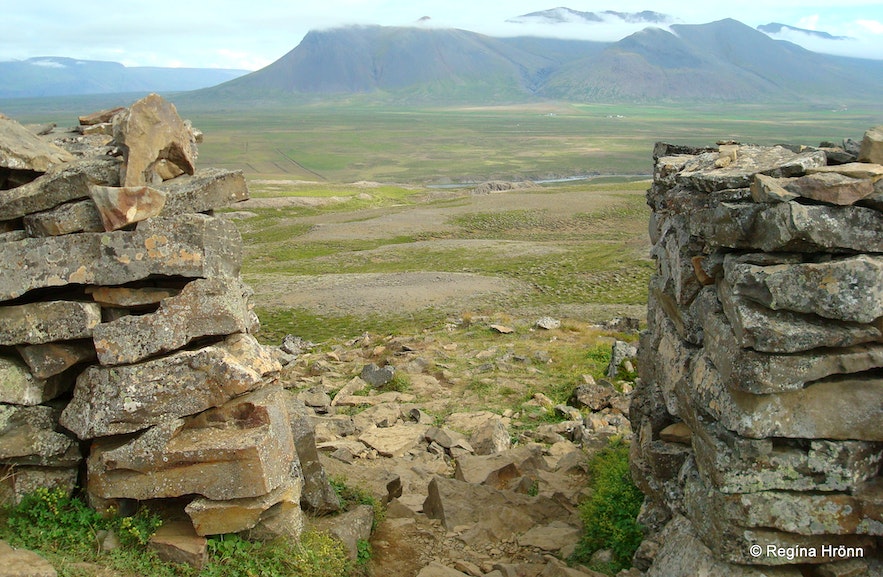 Barði not only built the fortress, but he also placed men in two places, one at Þóreyjarnúpur in case the Borgfirðingar would take the Tvídægra route, and the other one by Rauðanúpur, in case they would choose the Arnarvatnsheiði route, to Víðidalur or Vatnsdalur valleys.

These scouts should light a fire if they were to spot the Borgfirðingar. 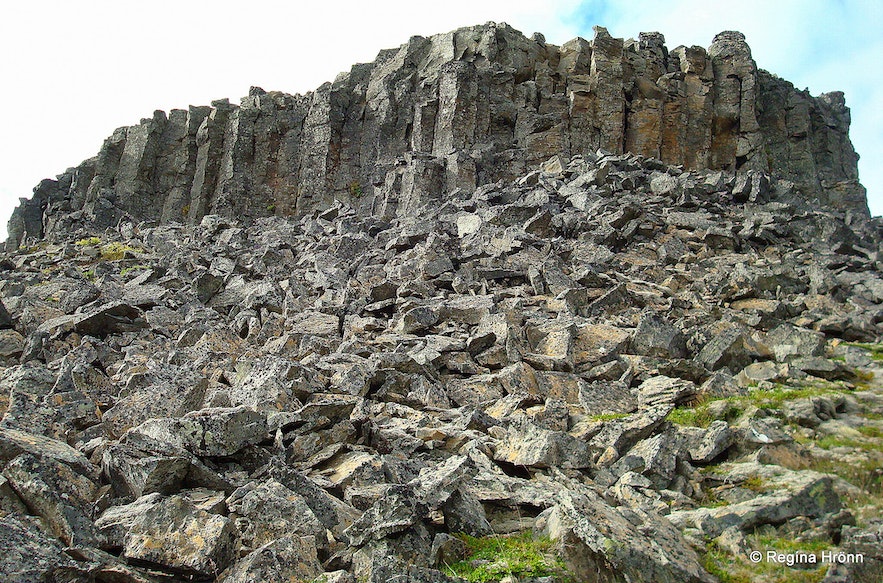 Barði‘s hunch was accurate as the Borgfirðingar showed up, but the route from the south is not mentioned.

Then Barði went to the fortress with his men and the Borgfirðingar beleaguered the fortress and unsuccessfully attacked it a couple of times.

The Borgfirðingar then planned on starving their enemies inside the fortress, but one legend says that Barði and his men had had ample supplies and the Borgfirðingar had returned back home after 2 weeks of siege. 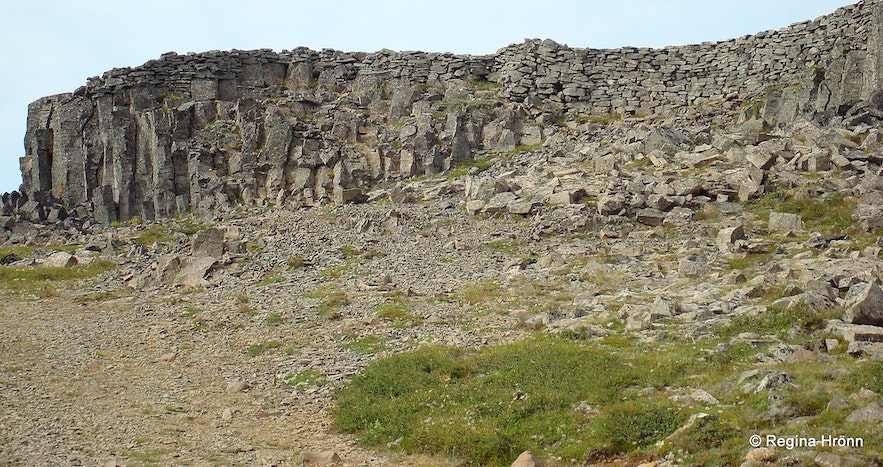 The Borgfirðingar gathered that there were ample provisions in the fortress and left.

The view dial at Borgarvirki

Barði then called one of his men (bryti) and asked him to show him how many provisions they had left.

The man brought the "mörsiður" - and told him that this was the only food they had got left.

The view dial at Borgarvirki

Barði then cut the "mörsiður“ in half and threw both pieces across the fortress wall into the crowds of Borgfirðingar, where they stood and were discussing the lack of provisions of their enemies.

After Barði‘s trick, the Borgfirðingar returned back south gathering that the men inside the fortress had ample food supplies. 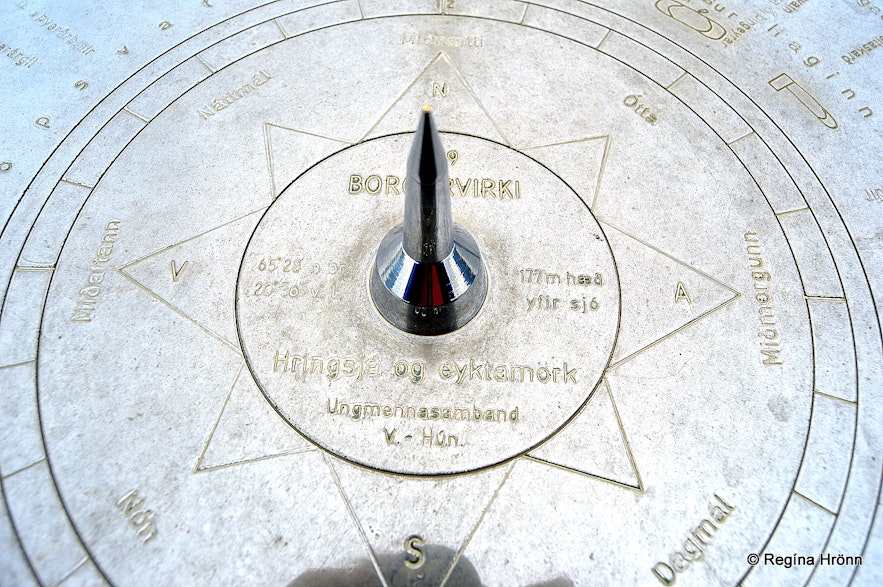 The view dial on top of Borgarvirki

On top of Borgarvirki, you will find a view dial showing the names and heights of the mountains in the vicinity.

There are around 90+ view-dials in Iceland and my goal is to find most of them and photograph them :)

I have written another travel-blog about the view-dials in the Westfjords.

My father-in-law, Jakob Hálfdanarson, designed this view dial back in 1988 and it was erected in 1990 by Ungmennafélag Vestur-Húnavatnssýslu. If you look closely during your visit you will see his initials J.H. (Jakob Hálfdanarson) on the view dial.

The view dial on top of Borgarvirki

Even though it was July during my visit I am dressed in layers and wearing a down-parka from 66° North, which is our best known Icelandic brand.

When they are having a sale at their outlet we Icelanders flock there and stock up on clothes that fit the Icelandic weather. 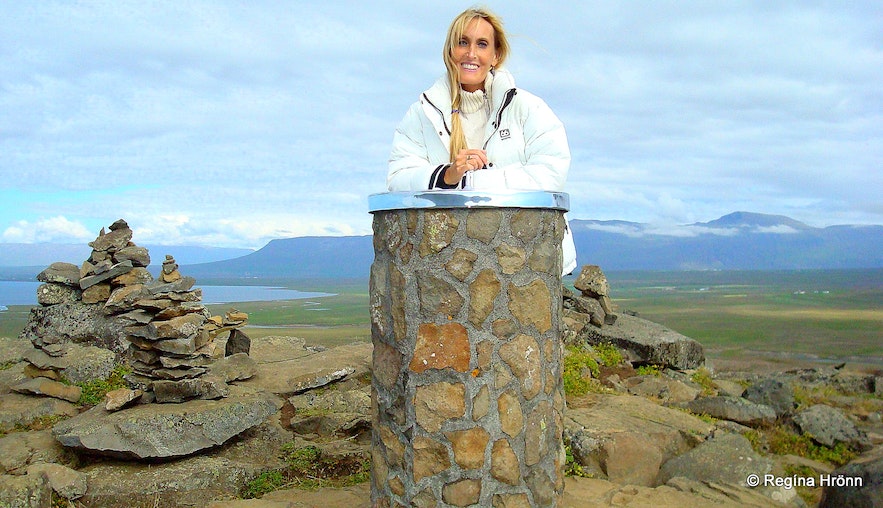 By the view dial on top of Borgarvirki

The road seems never-ending and when we finally got up to the parking lot by Borgarvirki on one of our visits there, we saw a tank lorry coming in our direction.  We just counted our blessings that we "missed" it by a few minutes. So please drive carefully here.

It is a bit tricky getting to Borgarvirki, but it is so worth it.