Ketubjörg Cliffs are off the beaten path on Skagi peninsula, which is located between Húnaflói and Skagafjörður in North-West Iceland. On this peninsula, you will find some beautiful pearls of nature, one of which is Ketubjörg Cliffs.

This peninsula is for sure off the beaten track and the farmers living on the farm Víkur on the northernmost part of Skagi didn't get electricity until the 22nd of December 2016! Until then they had to use a motor-generator to get electricity.

This was the only farm left without an electric cable as the next farms, which are some 10 km away from Víkur on both sides, with the names Hafnir and Hraun, got electricity back in 1975. 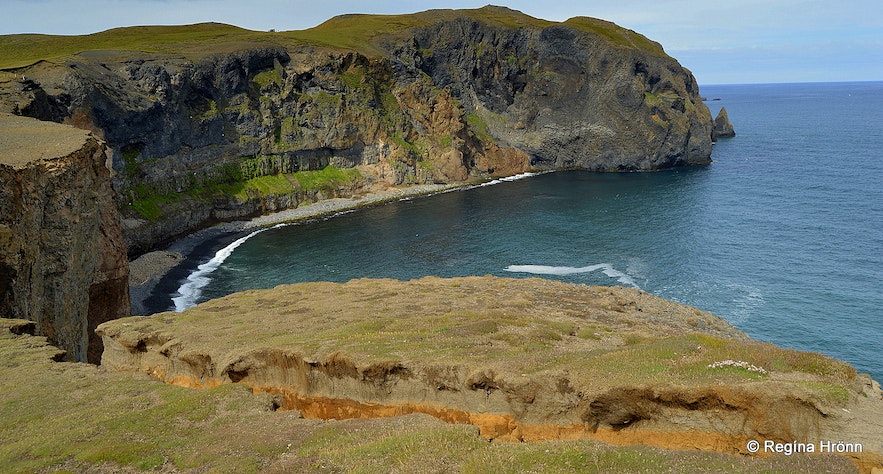 On the east side of Skagi peninsula, the coast is lined with some very rugged sea cliffs. Ketubjörg Cliffs are 122 meters above sea level and very steep, parts of them are almost vertical.

Outside in the sea, you will see Drangey island, the pearl of Skagafjörður, about which I have written another travel-blog. Ketubjörg Cliffs are a volcanic plug, remnants of that volcanic island. 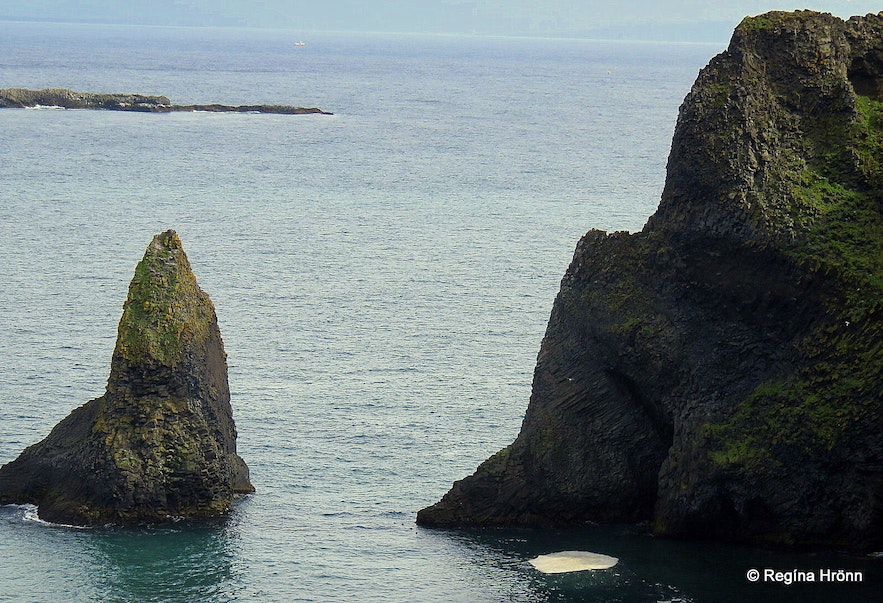 Many such rock pillars are called either Kerling or Karl (a male troll), which refers to the old belief that these rock pillars were trolls that had been petrified in the sun.  As everybody knows then trolls get petrified when seeing the sunshine ;)

See also my travel-blog: Kerlingarskarð Pass in Snæfellsnes in West-Iceland - the Folklore of the Giantess & her Fiancé

According to Þjóðsögur Jóns Árnasonar - the Collection of Folklore of Jón Árnason, which I have written about in many of my travel-blogs, then it was often difficult to pass the road above the cliffs because of the trolls, but there was supposedly a large troll habitation in Ketubjörg Cliffs.

The trolls held their assembly in Tröllalögrétta, which is a cleft through the cliffs. 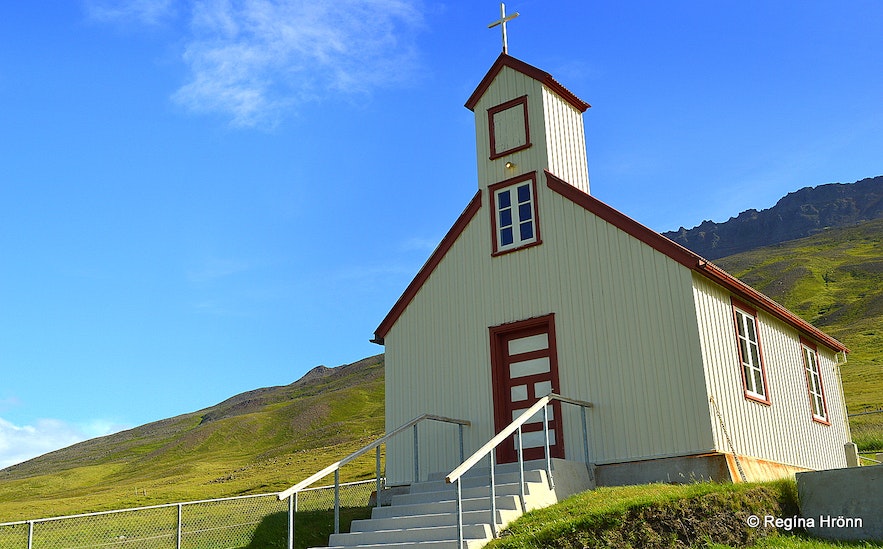 Ketukirkja church was an annexe church from Hvammur in Laxárdalur relatively close by. I tried to visit Hvammskirkja church, but it was locked and nobody around who could let me in.

When the ministers were riding from Hvammskirkja church to Ketukirkja church they used to ring a holy bell when they reached a hill called Presthóll or Priest Hill. They kept ringing the bell while riding alongside the cliffs.

One minister, Hálfdán from Fell, who served this parish for a while, managed to get rid of the trolls but advised the ministers to keep on ringing the holy bell when passing Ketubjörg Cliffs. 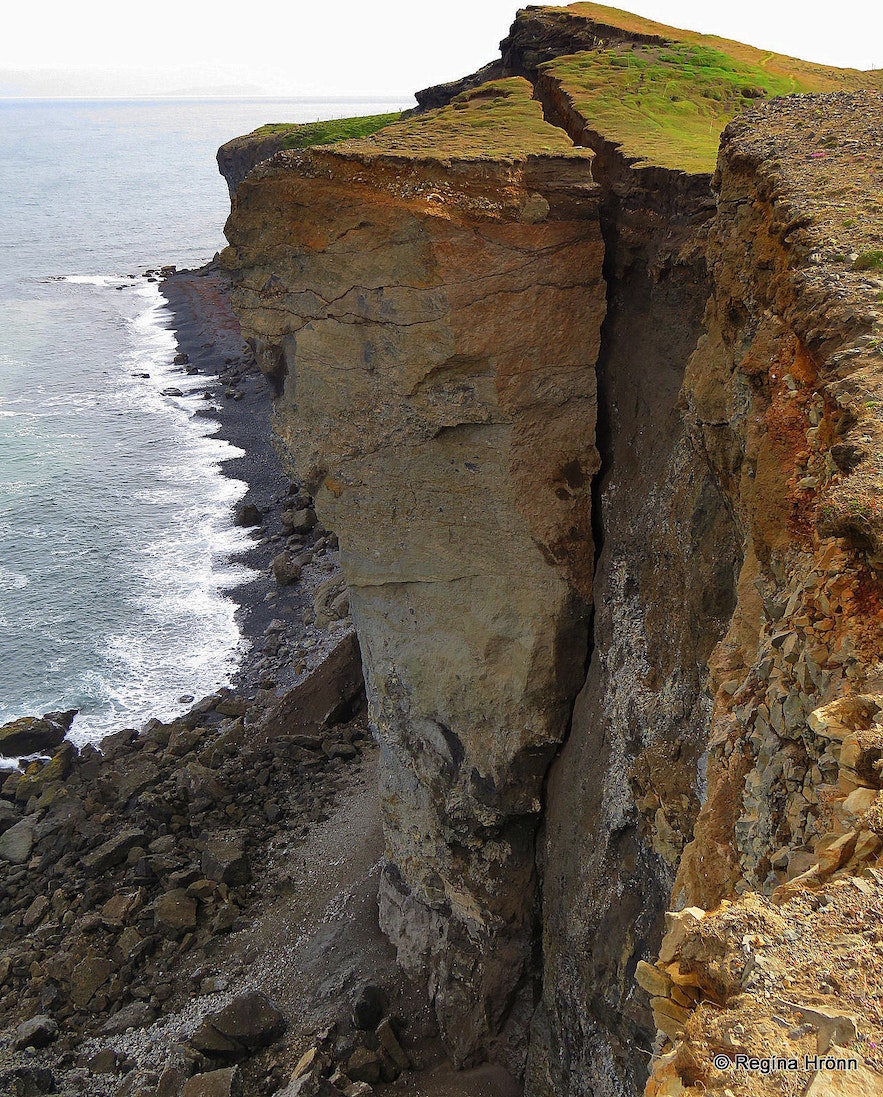 Now that the cliffs are collapsing one cannot help but wonder if the trolls are waking up again!

These cliffs are bird cliffs and as you stand on the cliffs you are almost unaware of how high up you actually stand until you see a sea-bird hovering in the air right beside you!

By Dalshorn in Syðri-Bjargavík, there is a popular lookout point with great views of the beautiful Skagafjörður bay. Right on that spot in the 65 meters high rock at Fálkabakki, dangerous cracks have appeared.

This happened when ice blocked the way for the river to run to the sea. It is believed that the rock will soon collapse and slide into the sea, making this lookout point a dangerous place to be. In August 2015 I visited Ketubjörg to check it out; a massive crack had appeared. In the photo below you can see how wide the crack was back then! 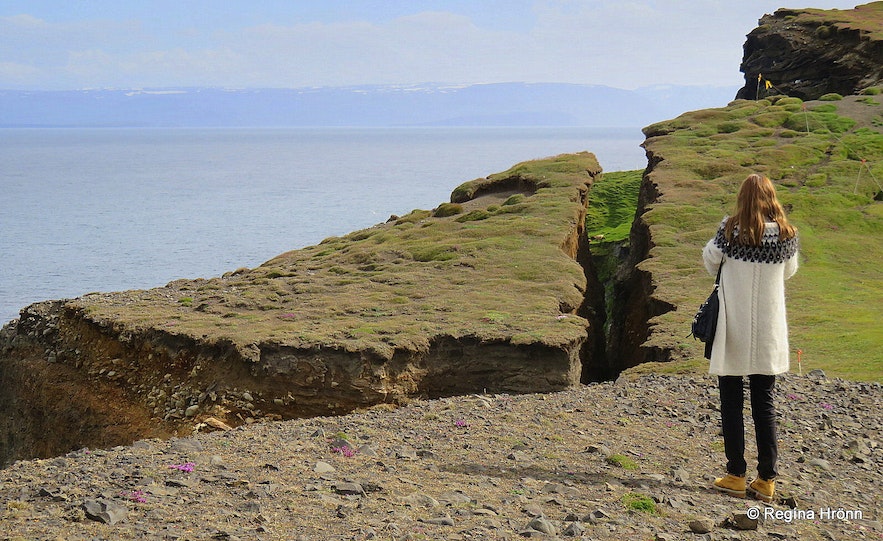 It is just unbelievable how the earth had cracked open in a short period of time and a big chunk of the cliff stood there alone, as it were, ready to collapse. The crack became visible only a few months before I visited it; it is just incredible how much the earth moves here.

A farmer in this area noticed the crack and when he saw a family of five walking around in this area he got startled and called the police to inform them about the danger of being in this area.

The police sealed this dangerous spot off so one cannot get as close to it as before, and rightly so, as sliding down with the rock will for sure prove to be fatal. So stay away from that particular area. When I was visiting there weren't any danger signs, but we had been warned about the danger on the news. 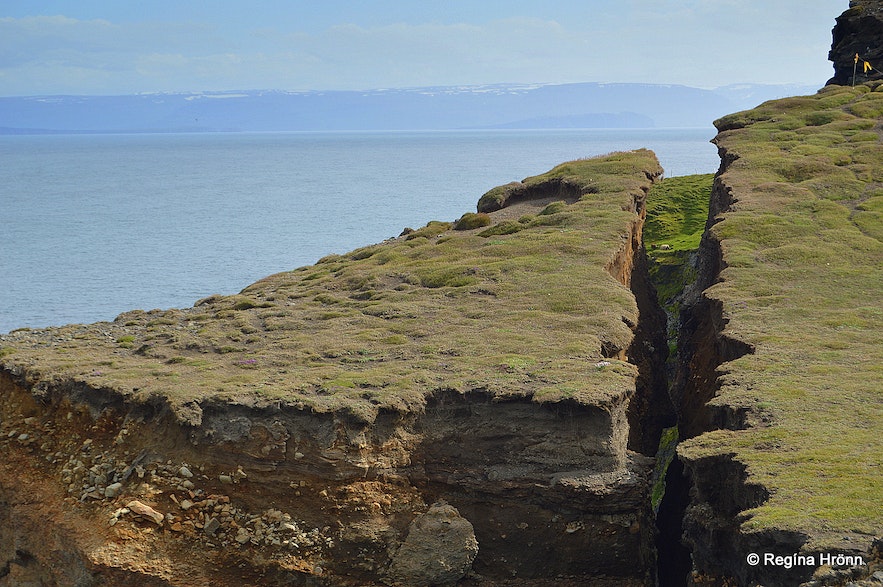 We saw other spots where the earth was beginning to crack, but apparently, cracks appear every few years in this spot. I for sure would not want to be standing there when the collapse takes place. So even if there are no danger signs, then be extremely careful here.

The police wrote in the newspaper in December 2017 that the danger at Ketubjörg is increasing and that the crack is now some 2 meters wide! And still, some tourists put themselves at risk there and don't listen to the warning words of the locals :( They pass the warning signs and cross the police banner - for what - to get a better look and a good picture?

Is it worth it putting one's life at risk like this? What can be done to make people realize the danger?? 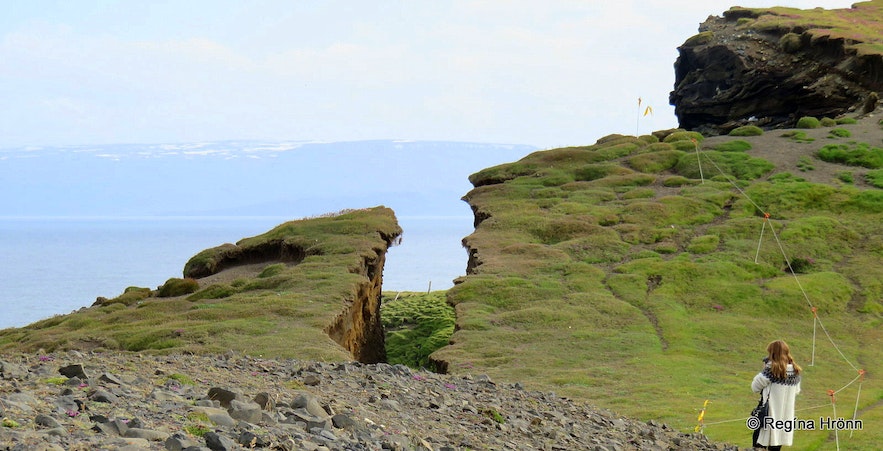 In November 2019 the cliff collapsed! Thousands of tonnes of rocks and soil went flying into the sea below. Before it collapsed the crack had become some 3 meters wide.

The rockfall was so massive that it even registered on seismographs at a 9 km distance! You can see photos of what this area looks like now after the rockfall on Iceland Monitor. 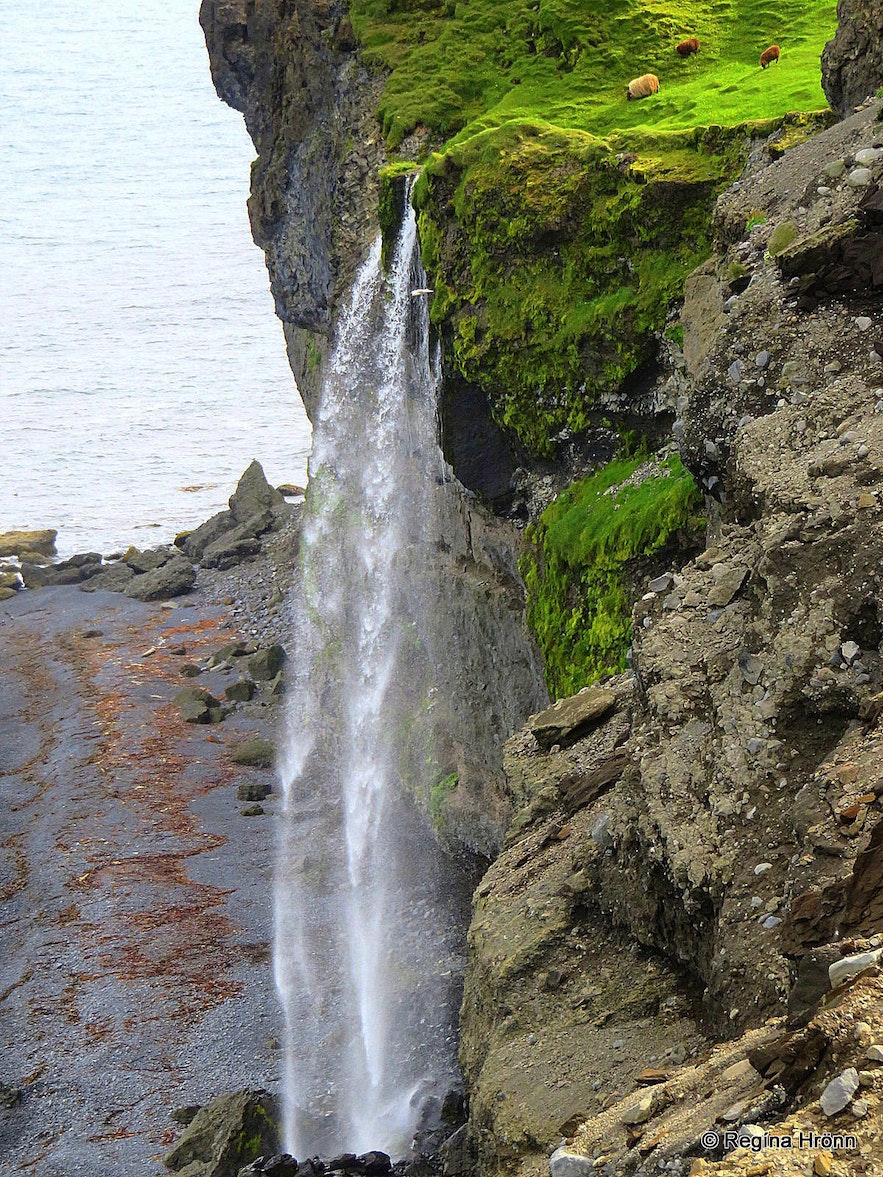 It is best to drive up to Ketubjörg Cliffs and have a look at Dalshorn from afar. Then you have to open a gate and drive up to the cliffs. The last part of the road is really bad. From there you will see the beautiful waterfall on the cliff.

It is small, coming from a small river in this area, but ever so majestic as it plummets from this high cliff straight into the sea. I was mesmerized by it. 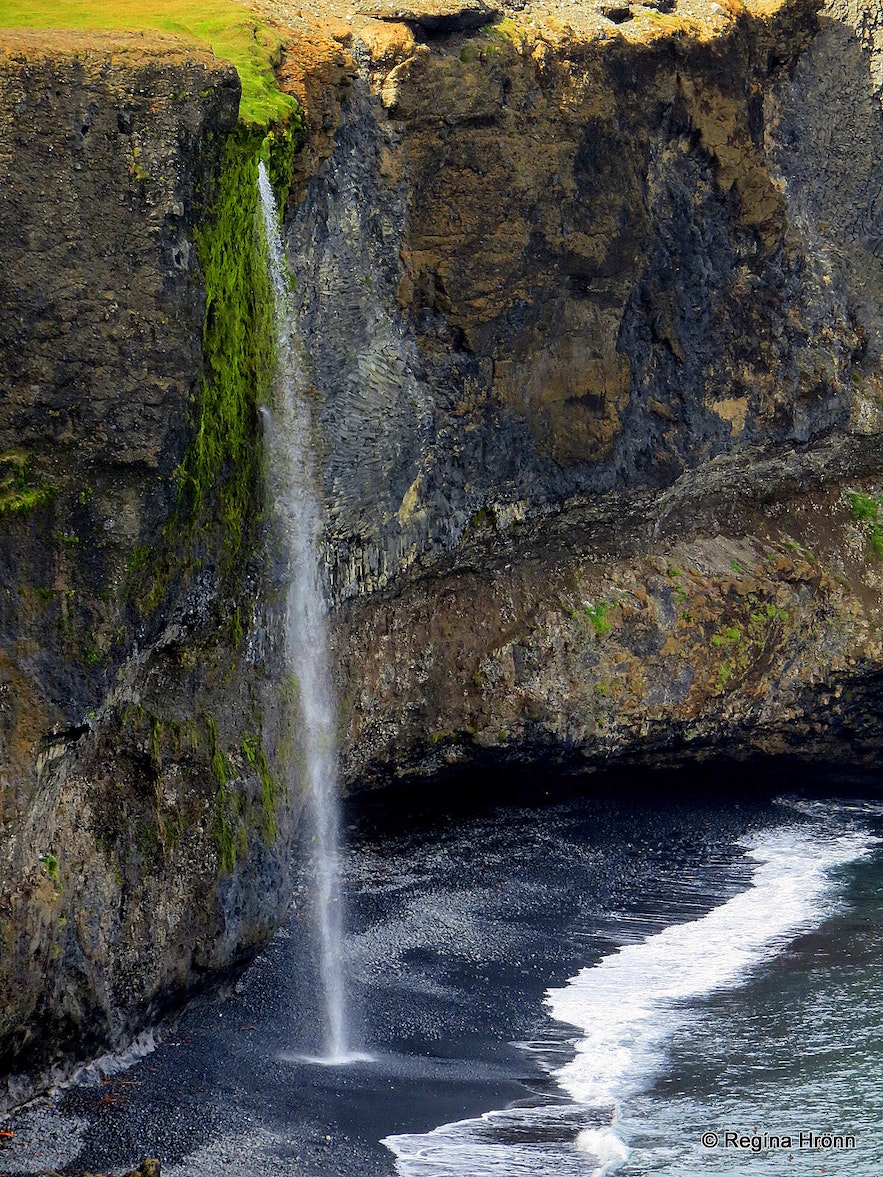 There is yet another way of visiting Ketubjörg Cliffs than driving up to them, and that is to cross a stile onto a grassy hill. It looks so innocent up there, but a little further ahead there are almost vertical cliffs, so let's be careful here.

This is not for people who are afraid of heights, but the view from here is so beautiful. Especially of the waterfall at Dalshorn.

I noticed that the signposts for Ketubjörg Cliffs had been removed, probably because of the danger of being there.

But further alongside the road, closer to the farm Keta, there was a sign for Ketubjörg Cliffs, where it is possible to walk down to see the other side of the cliffs and a beautiful small waterfall cascading from the cliffs onto the shore below. 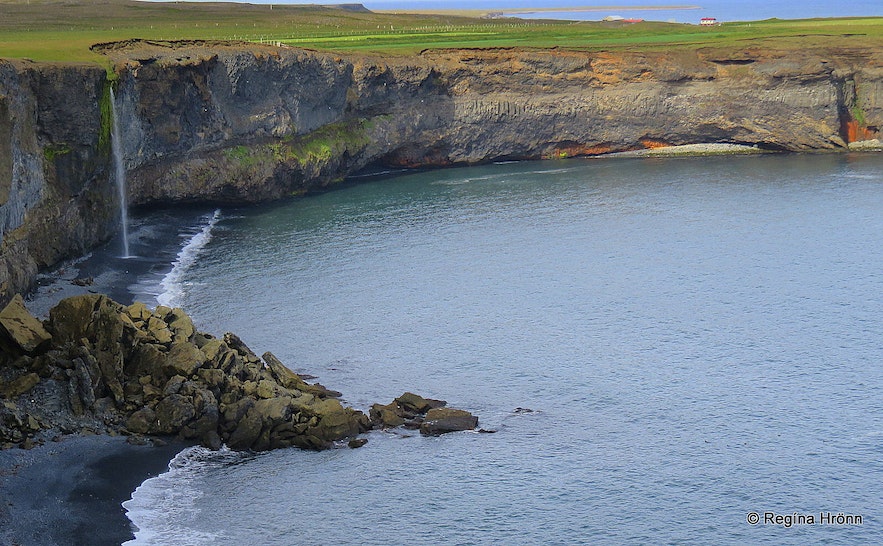 It is a small glittering waterfall, which plummets ever so majestically from the cliffs on the north side of Ketubjörg Cliffs in Ketuvík bay beneath the farm Keta.

On that side, falling rocks are also visible in several places, where parts of the cliffs have fallen into the sea.

It is possible to walk right to the waterfall if you follow the small river, so you actually stand right on top of the waterfall! 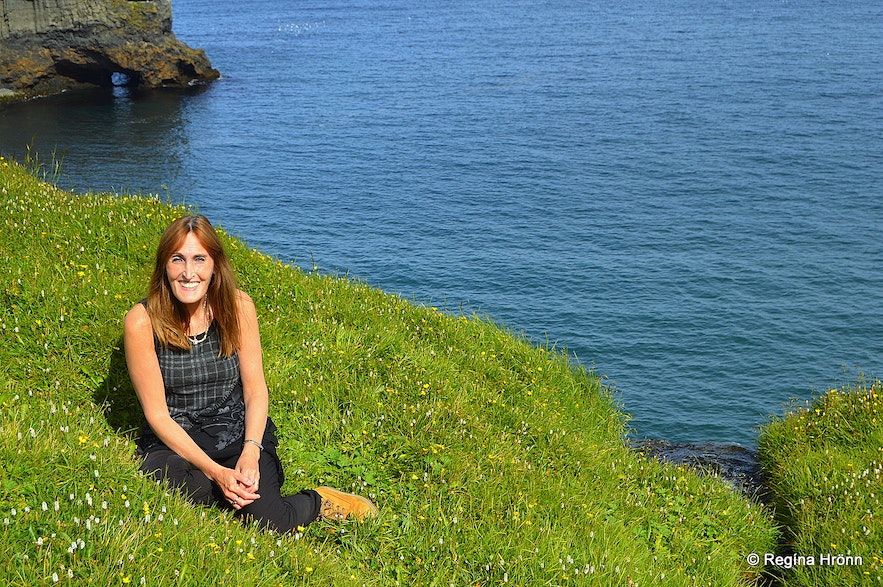 It doesn't look like it in my photo below, but the waterfall and the cliffs are right behind me. I was still a bit afraid of heights back then, so I just had my back turned away from the cliffs ;)

You can see how the sea has abraded the cliffs and formed arches and caves in the rock.

Like in so many other places in Iceland the rocks are decorated with columnar basalt formations, ever so beautiful.

The farm Keta stands close to Ketubjörg Cliffs. It is an old manor with a lovely little church. Grímsborg cliff in the fields by the church is said to be the dwellings of elves.

According to the Collection of Folklore of Jón Árnason, 4 elves were living in Grímsborg at a certain time, 2 men and 2 women, and the elf in charge was called Grímur.

Two of the elves at a time walked to the church at Keta to listen to mass, but two stayed at home. Once there were such hard times at Skagi that people almost died from hunger. One day in spring the farmer was, as usual, walking in his field and passed Grímsborg cliff.

He uttered these words in the form of a poem: "Láttu reka reyður, ríkur ef þú getur, brátt undir björgin ytri, Borgar-Grímur, á morgin." - meaning that he was asking the elf Grímur at Grímsborg to send him a whale under the cliffs.

Grímsborg cliff - the habitation of elves

The morning after a big rorqual (the largest of the baleen whales) had stranded under Ketubjörg Cliffs, and this godsend saved many people. We have a word in Icelandic "hvalreki" meaning godsend. But the literal meaning of the word is a whale, which has stranded on the shore.

This small church at Keta was built in 1895 and seats 55 people. You can ask the farmer if you can have a look inside the church. I visited it as I am in love with all these beautiful country churches in Iceland. I try not to pass a church in the countryside without visiting it, especially in remote places like at Skagi.

In the cemetery at Keta, you will find a mass grave for 11 fishermen, who drowned when their ship, the shark hunting ship, Haffrúin, perished at sea on the 11th of April, 1864 by Hraunsmúli in Skagi. So sad and on this day 8 women lost their husbands and 16 children lost their fathers :( 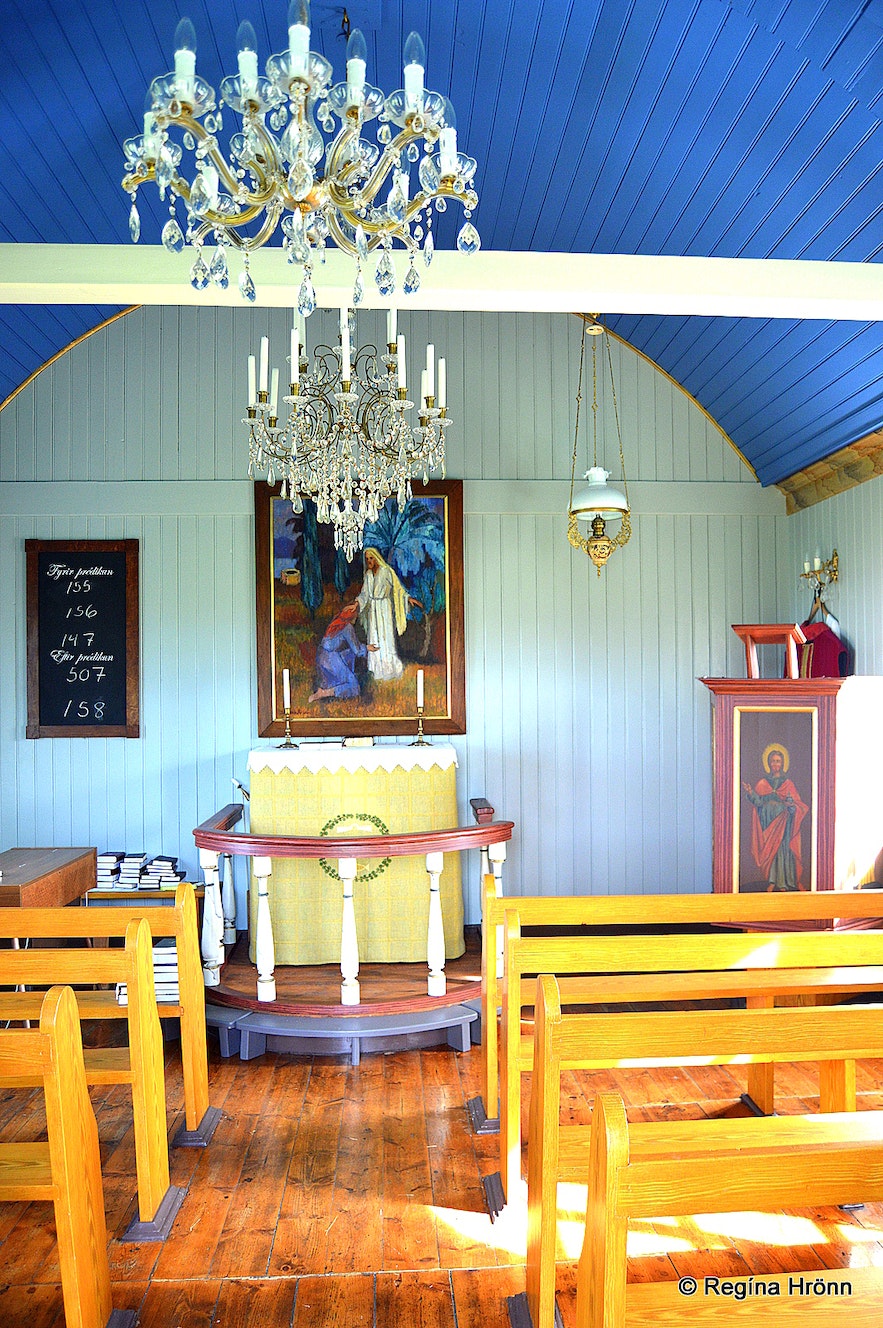 There are other pearls of nature here on Skagi, like Kálfshamarsvík, which has got the most beautiful basalt columns I have seen here in Iceland.

Ketubjörg Cliffs are located some 292 km away from Reykjavík and some 45 km north of Sauðárkrókur town. You can rent a car in Reykjavík and drive up north in some 4 hours. 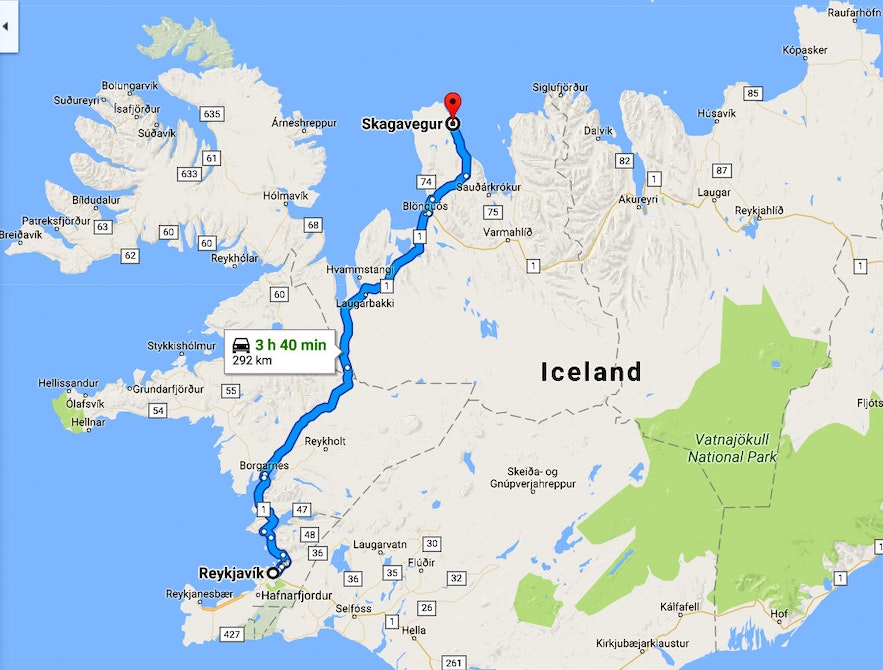 Let's only admire the view from afar and under no circumstances go close to the edge of the cliffs! As I mentioned earlier then the cliffs collapsed in November 2019, but there are other cracks in the cliffs, which can be dangerous.