I went on a truly memorable trip recently, when I sailed by boat from Drangeyjarferðir tours and climbed up on top of Drangey island sea cliff in Skagafjörður fjord in North-Iceland

There is only one way to climb up to the top of Drangey - on the man-made path at "Uppgönguvík" or the Climbing-Up-Cove. It is a steep path up to the top of the 180 m high cliff, but there are ropes and chains to make the ascent easier. And a ladder on the final climb.

Top photo: Puffins on Drangey island - all my photos are taken in fog, so they are a little dark 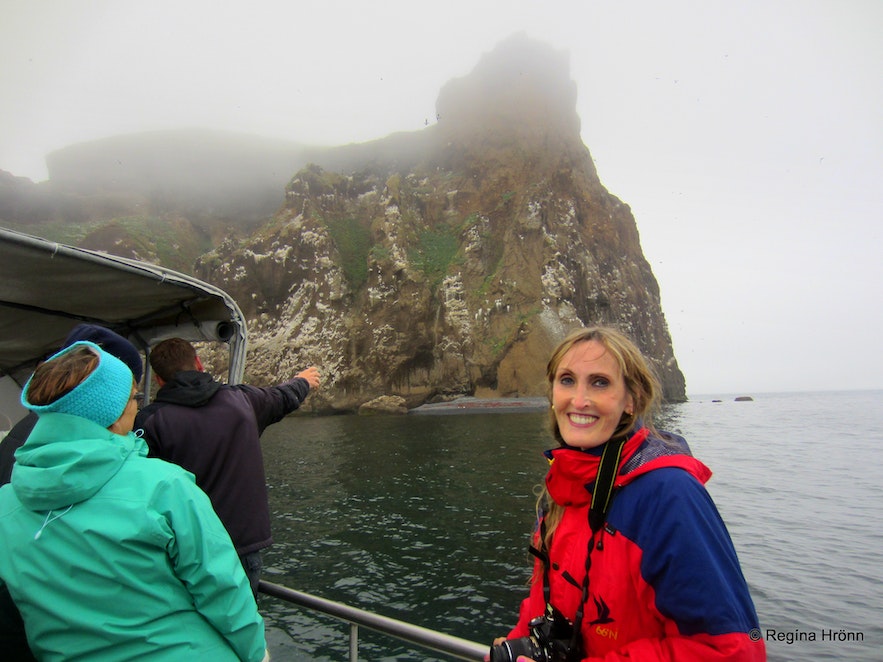 On the boat tour arriving at Drangey island

Drangey cliff is well known in Icelandic history, as here one of the best-known Vikings in Iceland, Grettir the Strong Ásmundarson (around 996-1040) from the Grettis Saga (written in the 14th century), sought refuge for his final years of being an outlaw.

He is known for being the longest surviving outlaw in the Viking history of my country; he was an outlaw for almost 20 years! 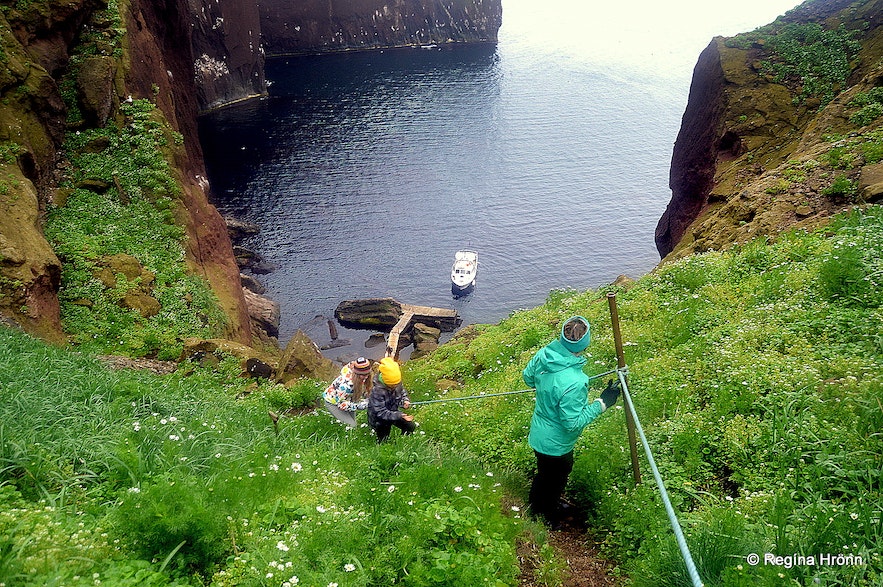 When I joined this tour I still had fear of heights and I was terrified of being so high up; I was holding on to the rope for dear life. Fortunately, I was mostly cured of this phobia by hypnosis a year later.

Grettir stayed on Drangey island cliff for 3 years with his brother Illugi, and Glaumur, who was his slave - and here Grettir was slain 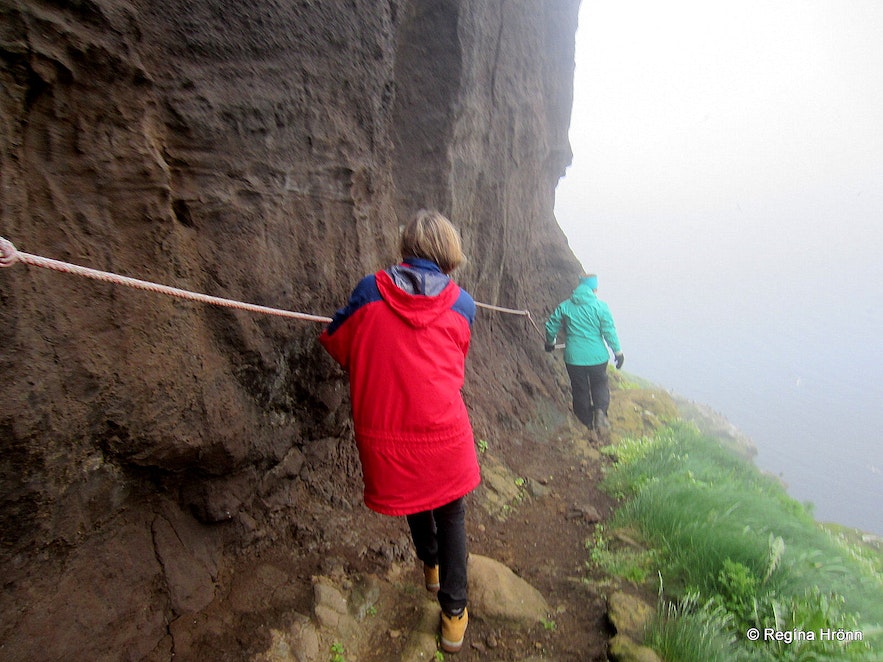 I was holding on to the rope for dear life

Grettir was so afraid of the dark that he had not wanted to be alone in Drangey, so Illugi offered to stay with him.

Grettir had chosen the Drangey cliff as his asylum as there is only one way to climb up to the top of this steep cliff in the ocean. This is the route we took to climb to the top. 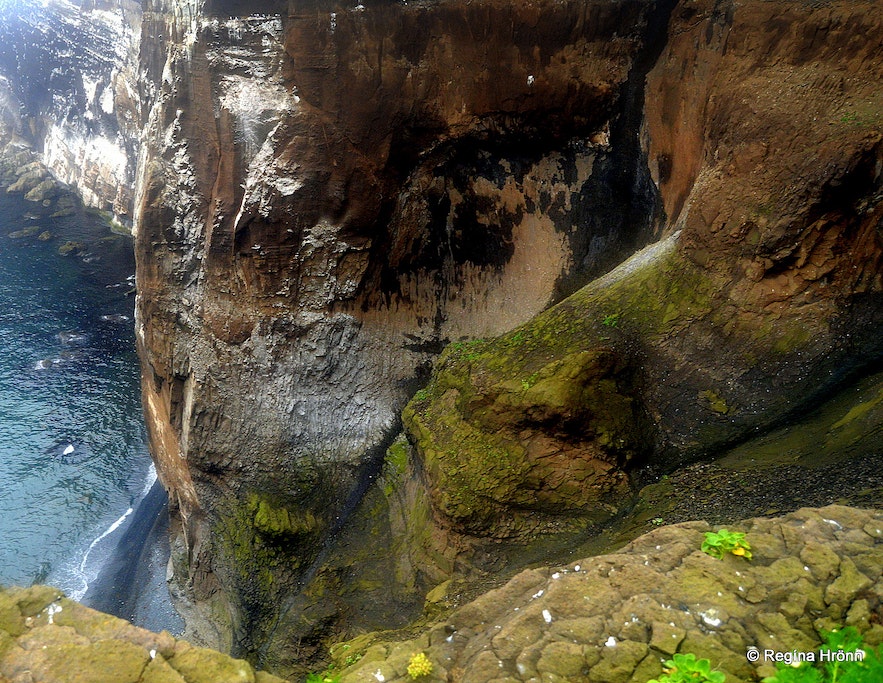 Drangey island - we were quite high up

Now there are ropes and chains to help visitors climb up to the top, and the final climb is done by climbing a ladder. It is quite steep in parts, but even kids can go on this tour, and they seem to love it.

We arrived at a spot called Gvendaraltari - the altar of Gvendur, named after bishop Guðmundur the Good, who consecrated the island after a row of accidents.

Here is a plaque on the rock with Faðirvorið - the Lord's Prayer in Icelandic. Guests on the island are supposed to say the prayer out loud before ascending any further. 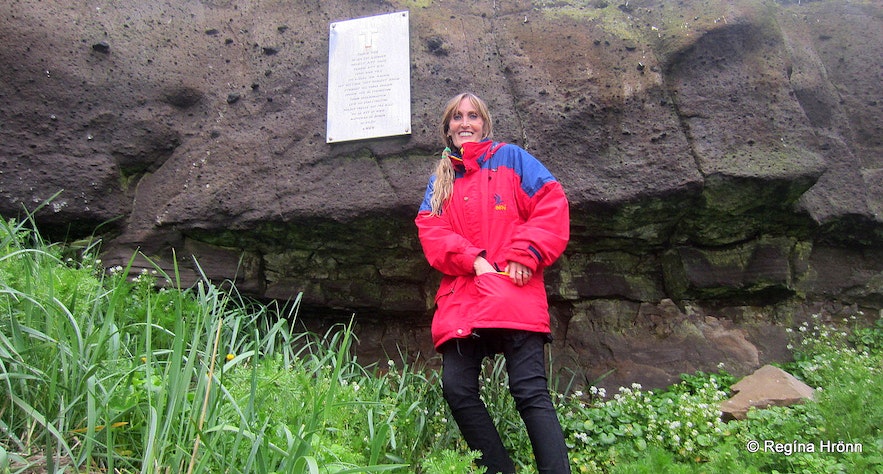 By Gvendaraltari on Drangey island

My next photo is taken from the ladder and one can see how steep this route really is.

We encountered fog on the cliff, so that affected my photos, but the sea, way beneath the ladder, can be spotted in my photo.

I was absolutely terrified of being so high up and dreaded the descent, and thought I would have to be rescued by a helicopter, but that is what fear of heights does to people! But it is pretty steep! 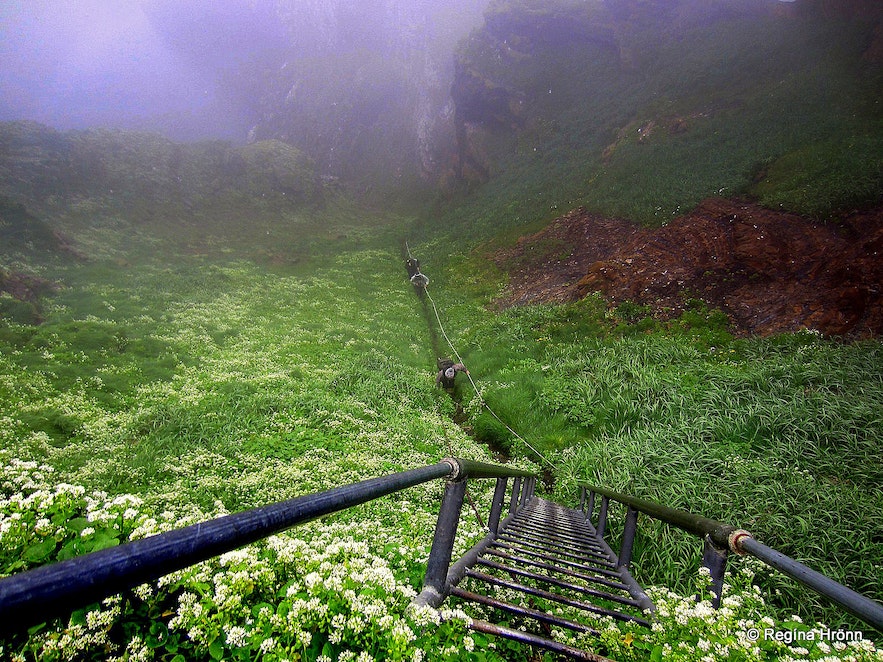 Once on top of the cliff, we visited Drangeyjarskáli hut, which was built in 1984, and our guide, Helgi, took a group photo.

Helgi then walked us to the spot on the island where Grettir the Strong had built a hut. One can still see the hole in the ground where the hut stood. It is called Grettisbæli or the Lair of Grettir.

Here Grettir had shelter from the northern wind and could collect water in small water bowls in the rock.

It was amazing seeing these holes, from which Grettir the Strong drank water some ten centuries ago! 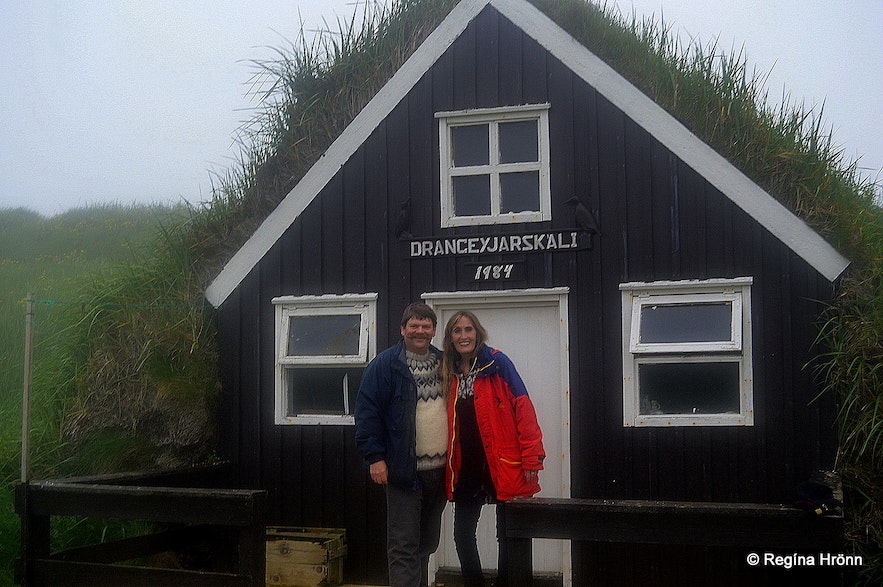 The group consisted of Icelanders and two French tourists, so Helgi told these stories first in Icelandic and then in English.

The top of this steep rock is covered in grass and in the years Grettir was living here some 80 sheep, belonging to the farmers, were grazing on the island, so Grettir and his companions had plenty to eat. There is also a myriad of birds on the Drangey cliff and eggs in abundance.

So they were not lacking in food at that time.

After a couple of years they had eaten all the sheep but one, which was a ram called Hösmagi, which they didn't kill as he was so entertaining, as it were ;)

I guess that Hösmagi was a forystusauður - a leader sheep and that they were badly in need of entertainment after such a long time on the cliff!

Grettir lived in Drangey for some 3 years or until he was slain in Drangey. A witch had cast a spell on a log, which landed on Drangey's cliff.

Grettir wanted to chop it up as firewood, but due to the spell his axe landed on his foot and he got a bad wound. His leg swelled up and turned dark blue. 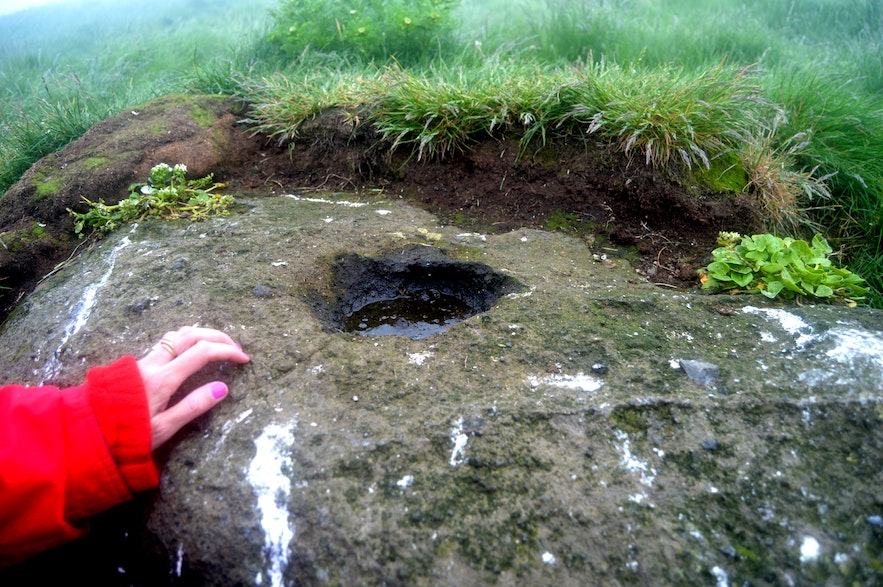 The reason for Grettir's being hunted as an outlaw was that he was believed to have burnt alive some 12 men, amongst them 2 brothers. Grettir had entered the rest house, where these men were staying, and wanted to ask them for fire; they mistook him for a troll.

Thus they attacked him and some hit him with firebrands, resulting in a fire spreading out (38th chapter in Grettissaga). 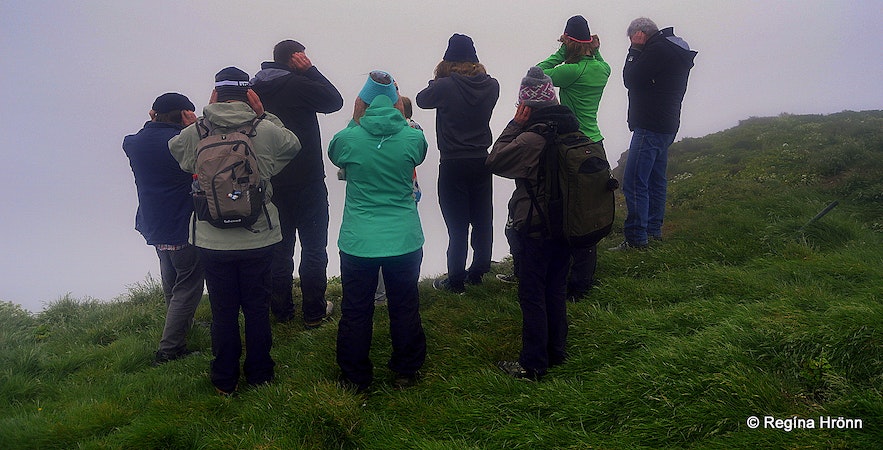 After listening to Helgi's interesting stories about Grettir's life and death on Drangey, we made the final hike to the top of the around 180 m high cliff.

On the way - up to the top - we stopped by the steep cliff's edge and were shown Grettisbrunnur or the Well of Grettir, where Grettir collected water supplies.

There are more places on the cliff that are named after Grettir. 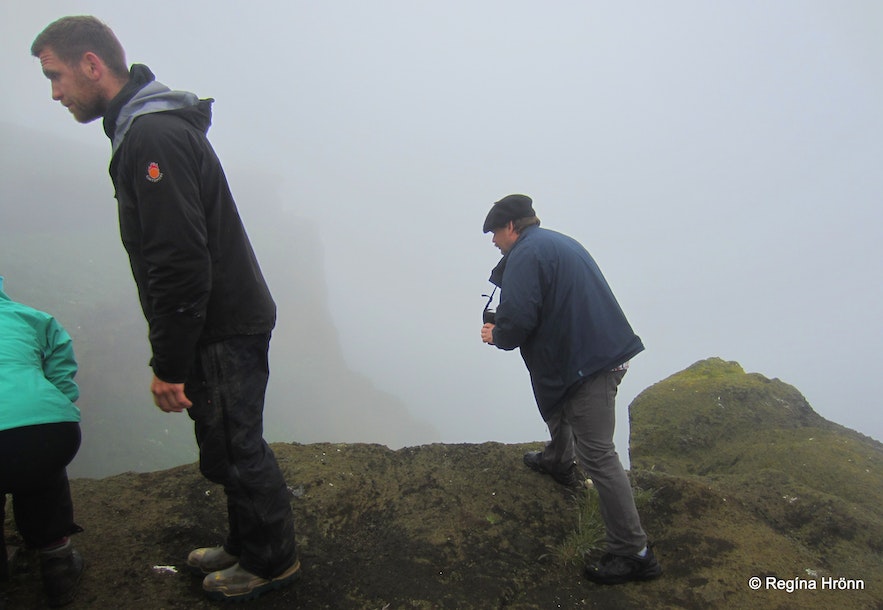 Looking into the fog

When we got to the top of the cliff, Helgi the tour guide, took us to the edge of the cliff, which was quite scary in the fog, and asked us to hold our hands behind our ears. That way the sound of the birds beneath in the cliffs multiplied.

It was quite something, standing there in the fog, listening to the squawk of the myriads of birds in the cliffs.

And everywhere we looked there were birds. Only the fog prevented me from taking more photos. 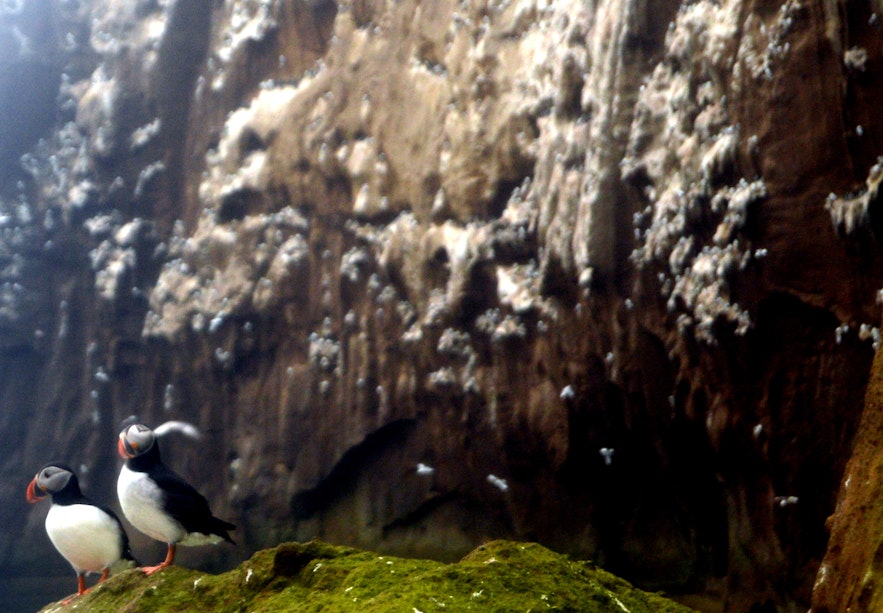 Drangey is the home of myriads of birds and it is white in places from the guano, which in my opinion adds to the beauty of the cliff.

The bird species which can be found in abundance on the cliff are guillemot, puffin, and auk, plus many other species, f.ex. the fulmar, the puffin, the kittiwake, the raven, and the falcon.

We saw several young ravens in the fog. And a lot of puffins.

The cute puffin is the most popular bird in Iceland and most visitors seek it out when visiting Iceland. With its multi-coloured beak, it is quite spectacular.

And on Drangey you will see puffins all over and one can get beautiful photos of them.

Unfortunately, it was foggy, but here is a link to Drangeyjarferðir tours, where they have some lovely, clear photos of Drangey cliff and the puffins. 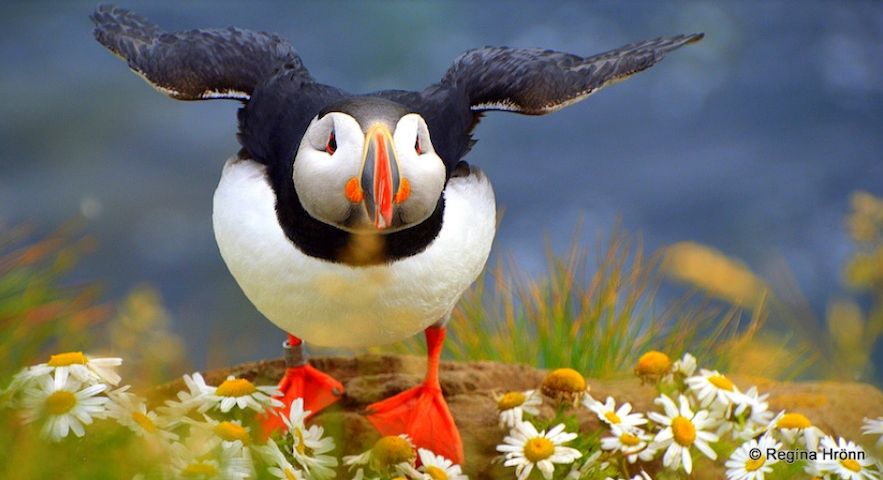 A puffin at Látrabjarg

It was quite strange knowing that we were almost stepping on the puffin and one has to take care not to stumble or get one's feet stuck in the holes as they are all over the grass. 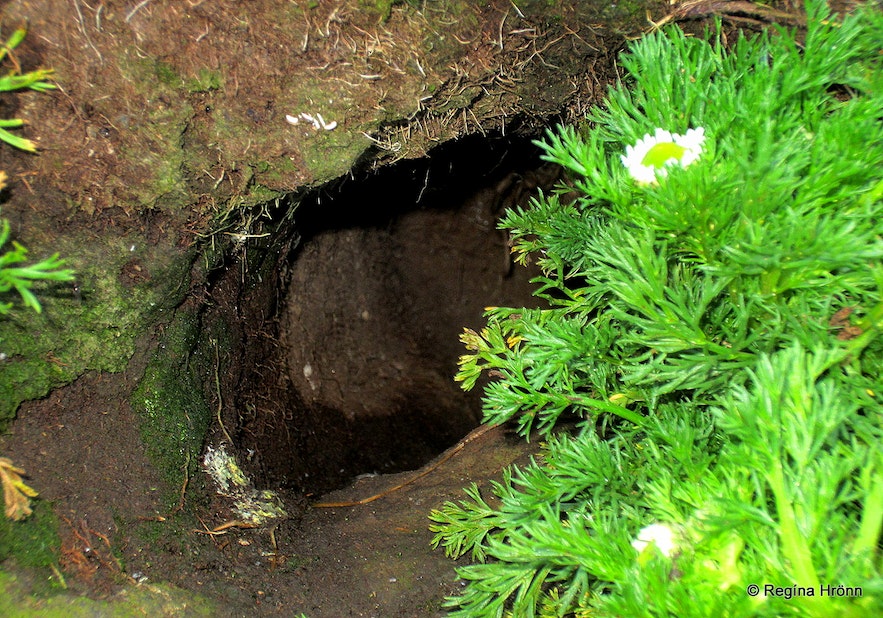 A puffin hole on Drangey island

Drangey has always been a good food source for the people living in Skagafjörður and it is a landmark in the fjord, often called the Pearl of Skagafjörður.

To the south of Drangey, a steep rock stands alone in the sea. It is called Kerling (the old lady) and there used to be a rock on the north side of Drangey called Karl (the old man), but it collapsed in an earthquake centuries ago. 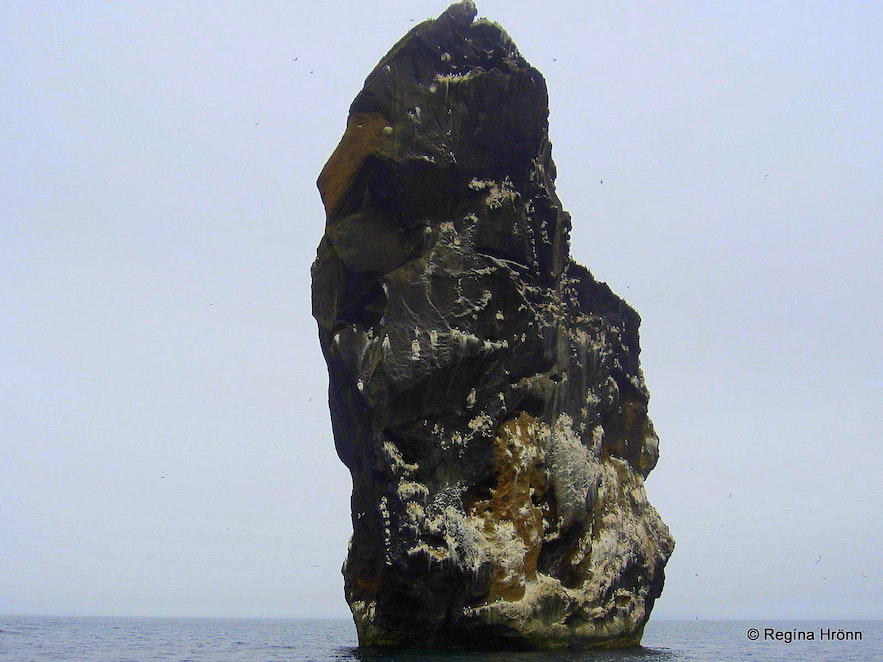 In many places in Iceland, rocks like these can be seen, with similar names. They are trolls that have been caught in the sunlight, but as everybody knows then trolls turn into stone by the rays of the sun ;)

Karl and Kerling were crossing the fjord with their cow when the sun came up - and all of them turned into stone. The cow turned into Drangey cliff.

Both Drangey and Kerling looked quite ominous in the fog. The fog sure added to the mystery of this awesome island.

We have many such stories in Iceland, f.ex. Kerlingarskarð Pass in Snæfellsnes in West-Iceland - the Folklore of the Giantess & her Fiancé 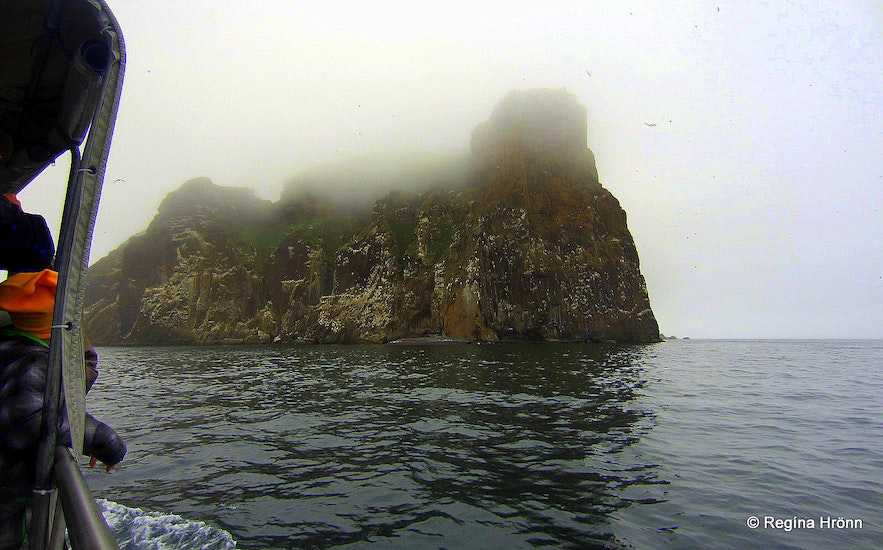 Now back to Grettir the Strong when he was still alive. Fortunately, Grettir had some friends on the mainland, one of which lived at the farm Reykir in Reykjaströnd.

One day in their fire got extinguished and Grettir swam to the mainland to get fire from his friend there.

This deed has been named Drangeyjarsund swim - Grettir swam for some 7 km in the cold sea! 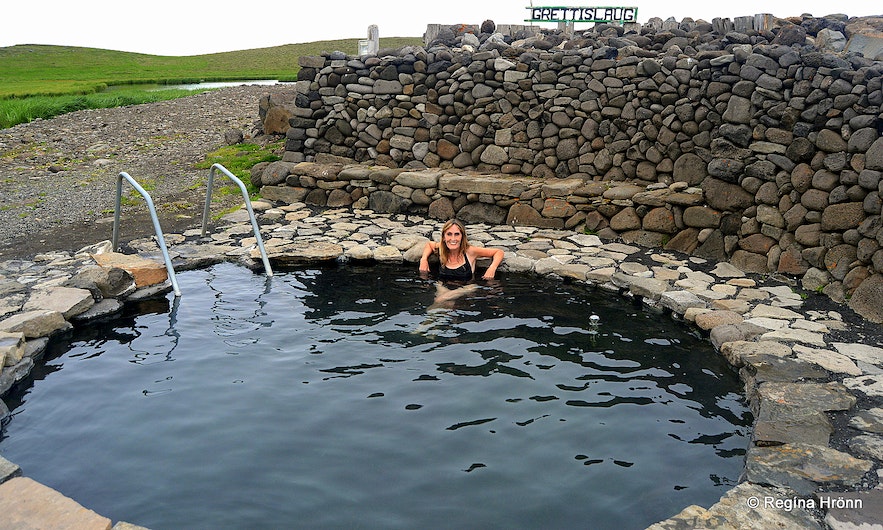 After he came ashore he warmed up in a natural hot pool at Reykir. It is described in Grettis Saga how Grettir baked in the hot pool for the longest time before visiting his friend to get fire from him.

His friend must have given him a lift back to the island on his boat. There is no way that Grettir could have swam back with a torch in his hand.

There is now a replica of this hot pool, Grettislaug, next to the Drangeyjarferðir tours Information Centre.

It was lovely warming up in Grettislaug and the newer pool next to it, Jarlslaug or the Pool of the Earl.

The temperature of the pools is around 39° C.

Jarlslaug (the pool of the Earl) was built in honour of the late Jón Eiríksson Drangeyjarjarl, who was the tour operator for Drangeyjarferðir for many years and who built Grettislaug pool.

Jón Eiríksson's son, Viggó, and his grandson, Helgi Rafn, now operate Drangeyjarferðir tours. Helgi Rafn, who is in my photo below, was our very knowledgeable and friendly guide on the tour. 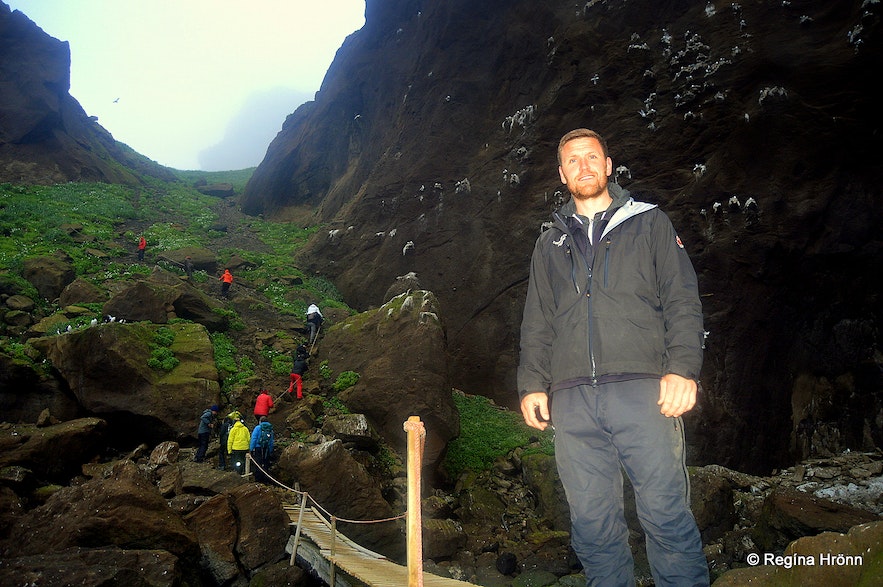 The Drangeyjarferðir tour is a fantastic guided tour that I highly recommend if you are travelling in this area - Drangey is so rich in history and bird life and visiting it is a truly memorable experience.

To visit this area you can rent a car in Reykjavík and make it a part of your North Iceland experience.

Here is the location of Drangey island on Google maps.

Source: The Saga of Grettir