Dynjandi waterfall is the biggest waterfall in the Westfjords and truly deserves to be called the Jewel of the Westfjords. It is, in my opinion, one of the most beautiful waterfalls in Iceland, at least the most majestic waterfall I have seen in my country. 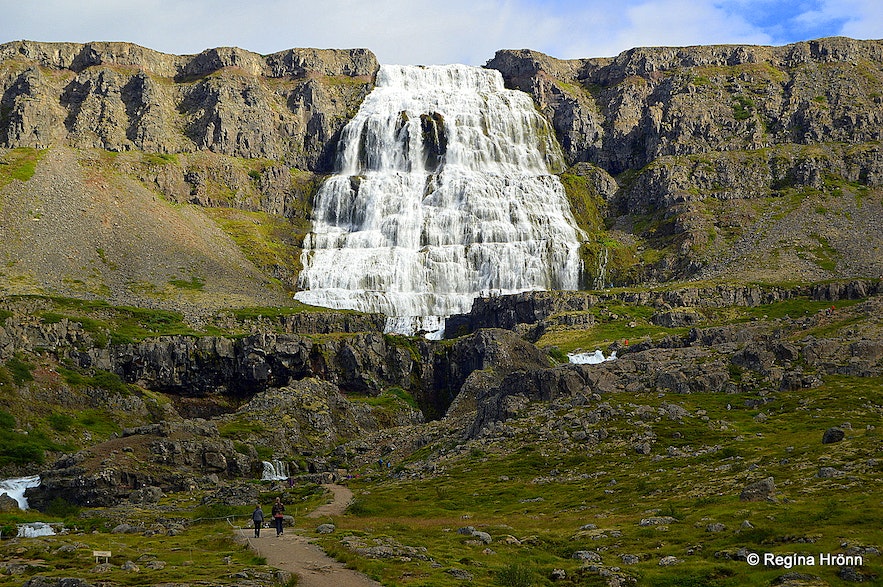 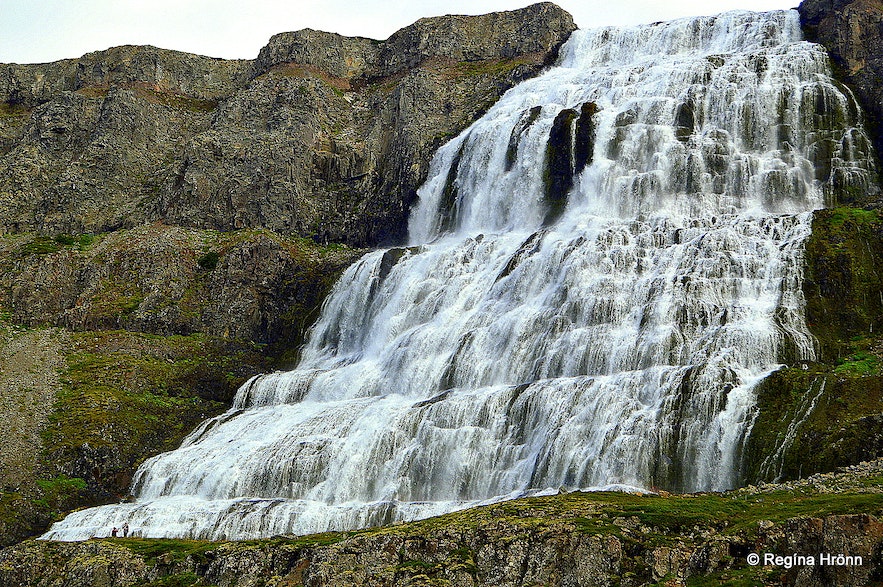 The names of the other waterfalls are from above according to the map by the parking lot: 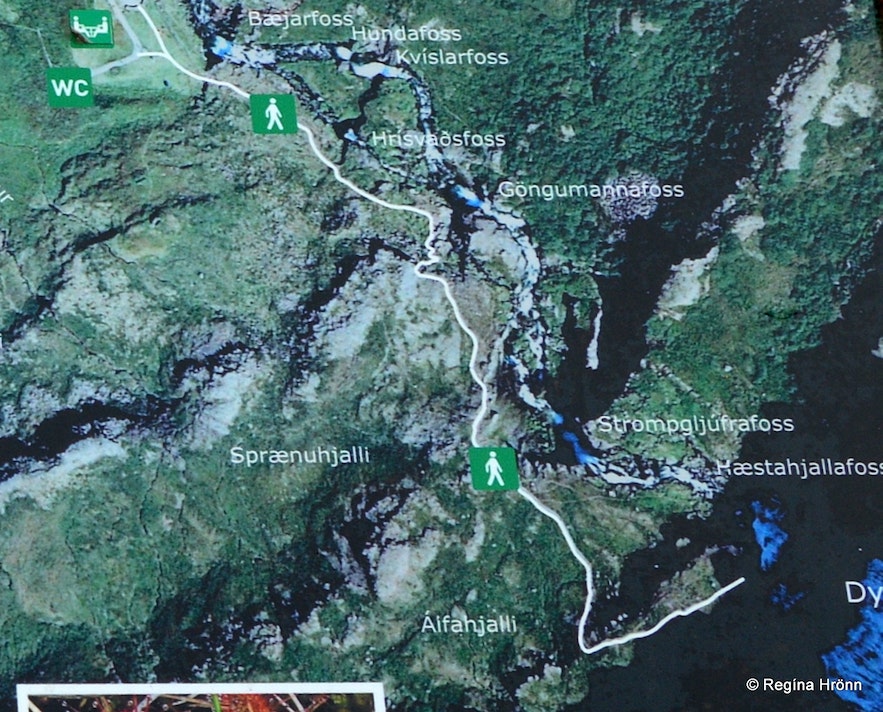 The map by Dynjandi parking lot

You can see that all these waterfalls end in -foss, which is the Icelandic term for a waterfall.

To reach Dynjandi there is a bit of a hike, no more than 15 minutes or so though, and on the way up you can stop by all the smaller waterfalls.

A rocky path, made by volunteers back in 1996, leads up to the waterfalls and it is a bit of a climb getting all the way up to Dynjandi. 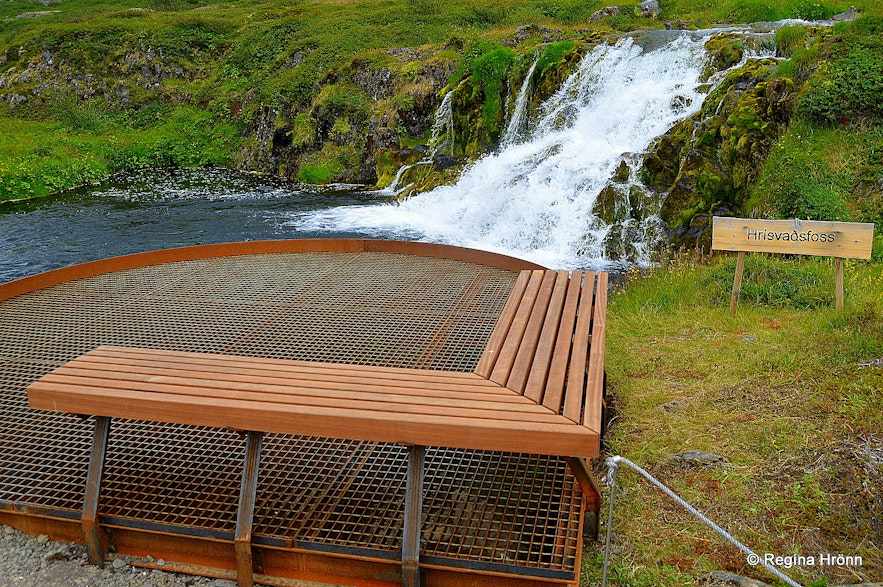 Nothing major though, but if you have bad knees for example, then it can be taxing. The last time I visited Dynjandi a man with bad knees had to stop when he was halfway up and couldn't make it all the way to Dynjandi.

Below you will see Dynjandi and Strompgljúfrafoss waterfalls, which make a beautiful pair. Notice the tiny people in front of Dynjandi. 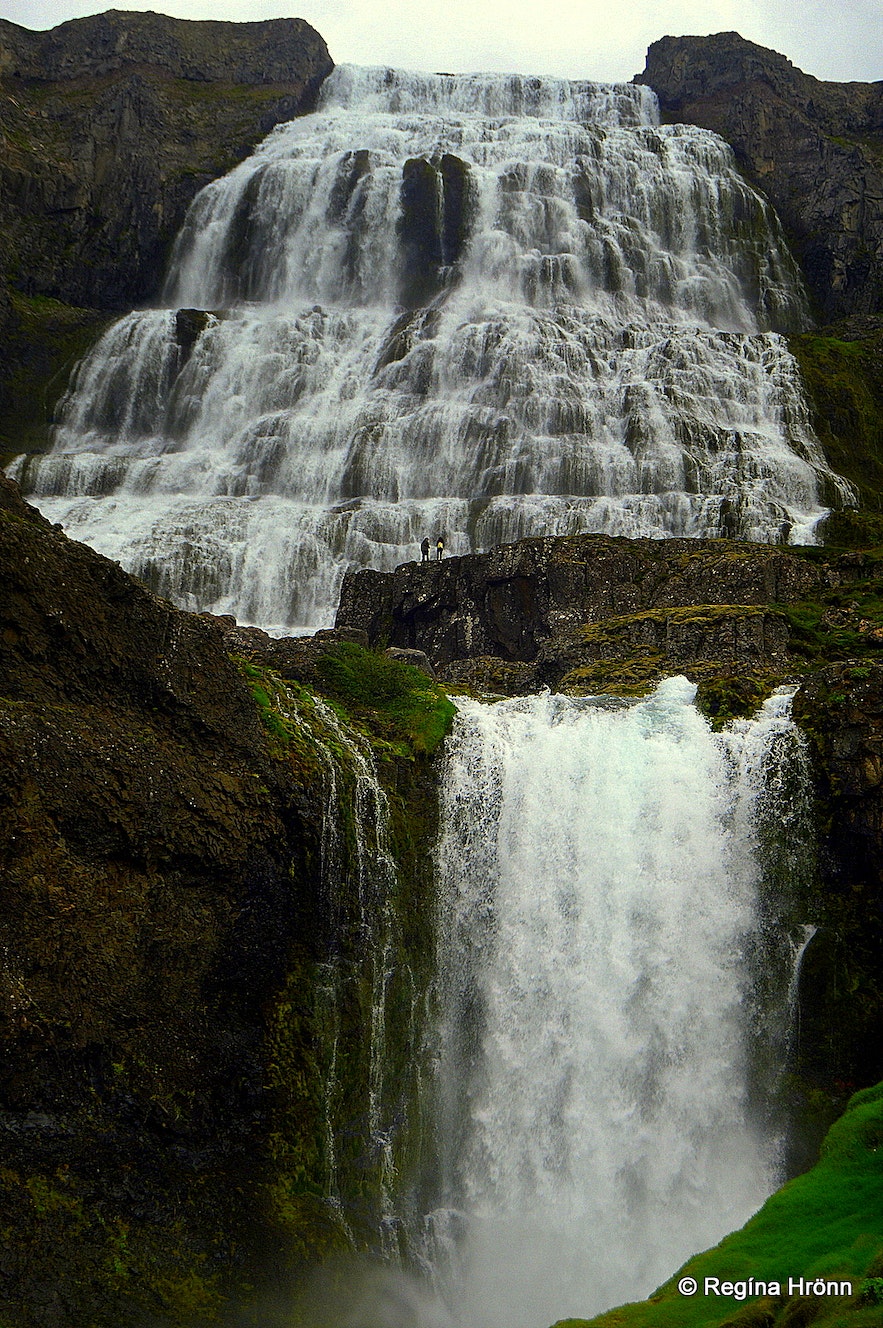 Dynjandi and Strompgljúfrafoss waterfall - this is one of my favourite photos

Arnarfjörður is actually Iceland's most notorious sea monster fjord! In Bíldudalur village close by you can learn all about these sea monsters at the Sea Monster Museum. I have written another travel-blog just about Arnarfjörður fjord and what to see and do in this long fjord. 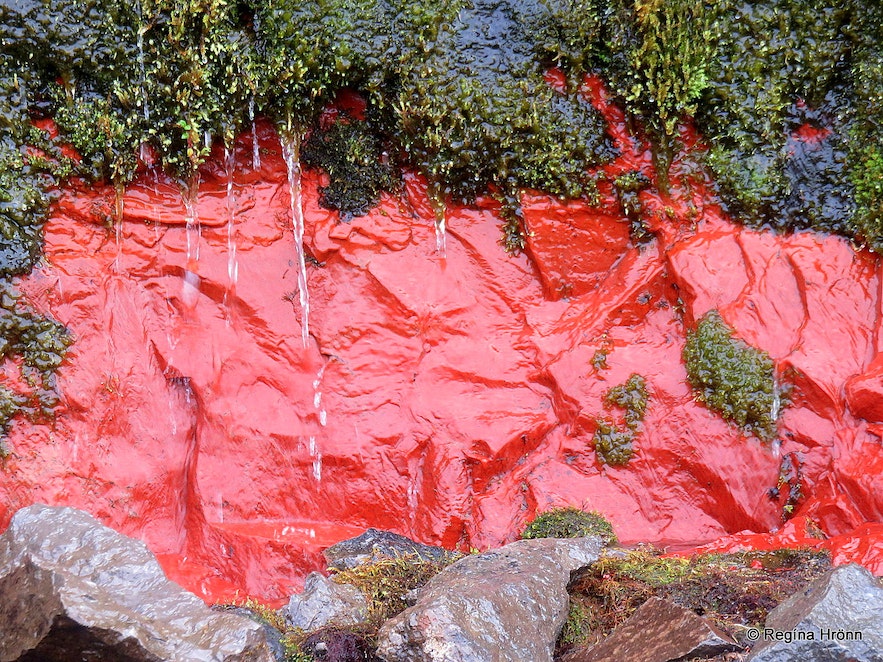 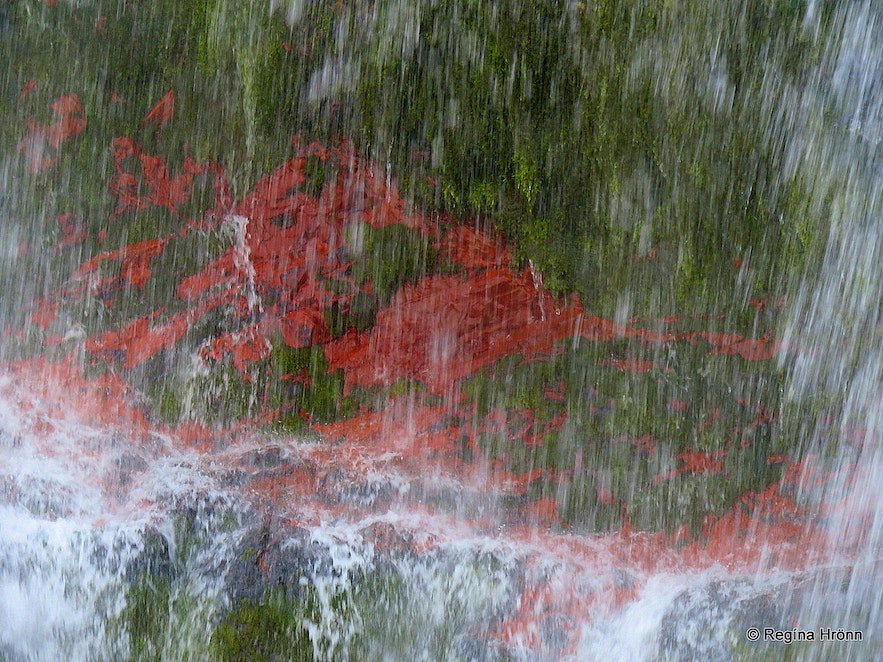 Layers of soil rich in iron behind Dynjandi waterfall 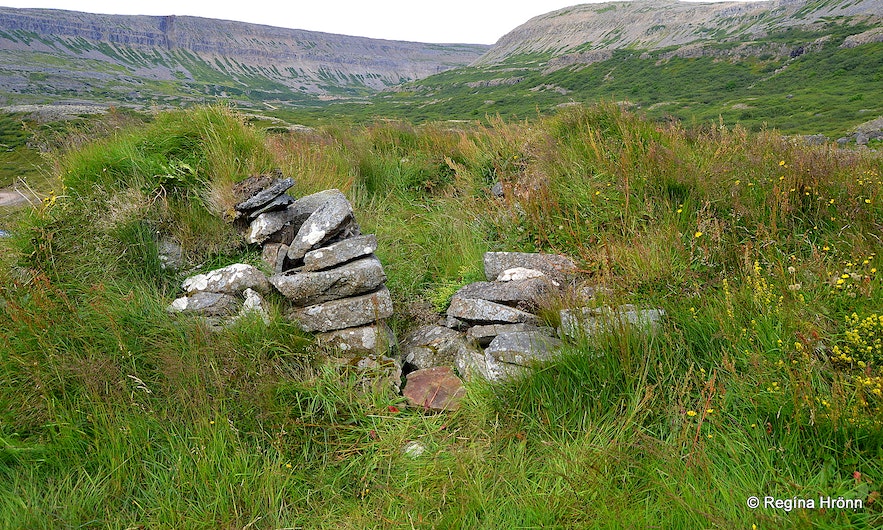 Ruins of a turf farm

A path leads to the remains of the farm and outhouses. Above you will see the ruins of one of the outhouses. 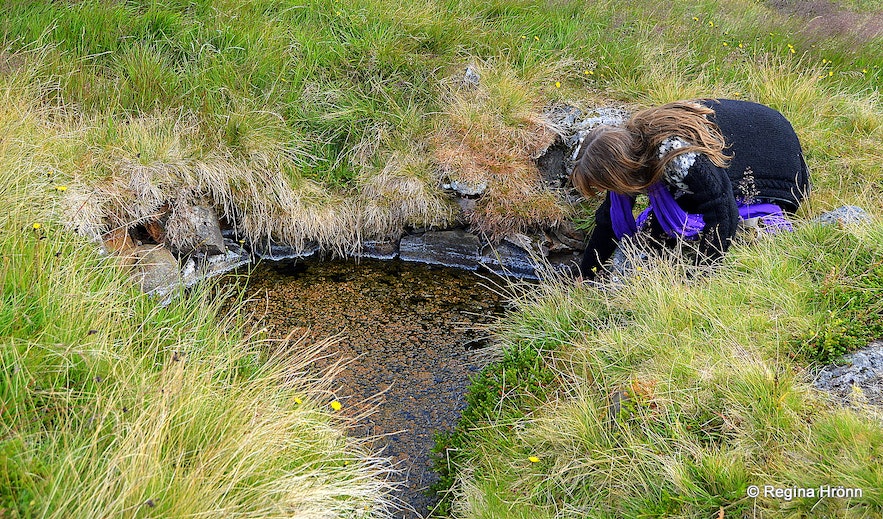 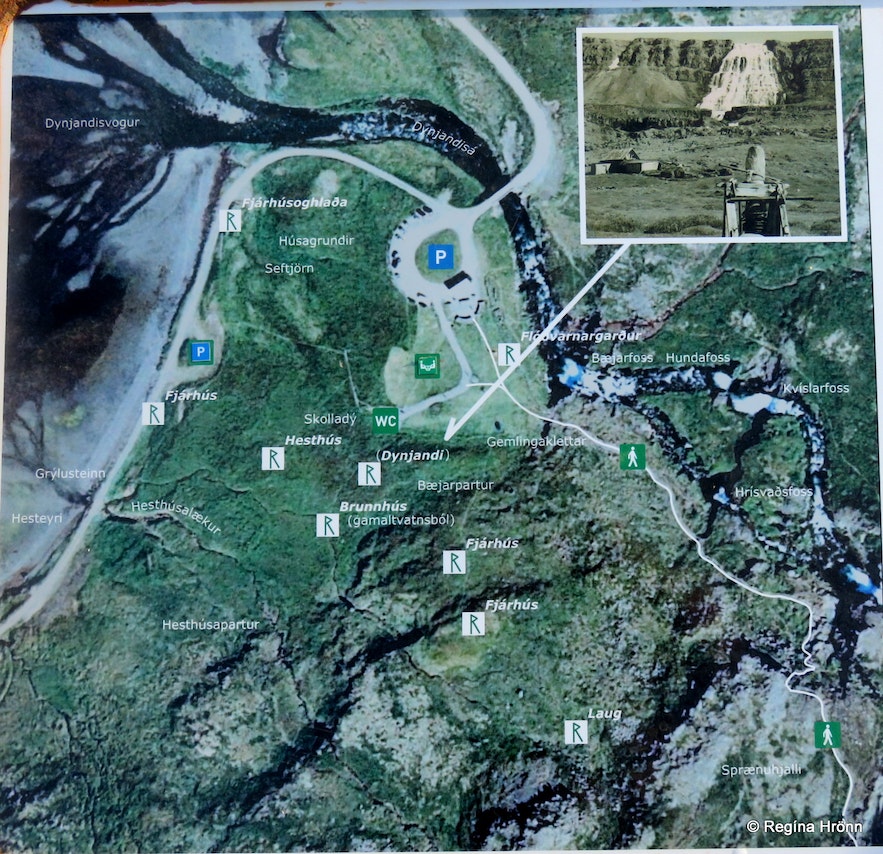 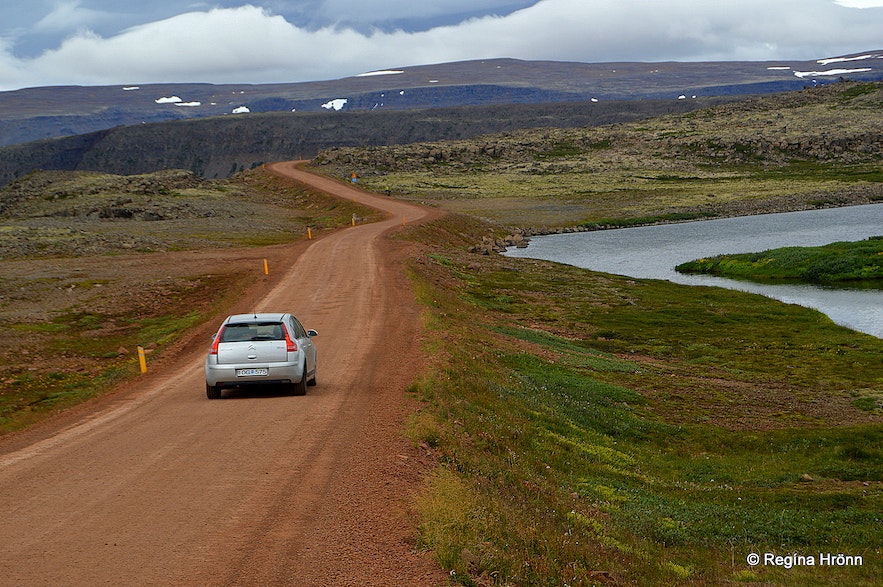 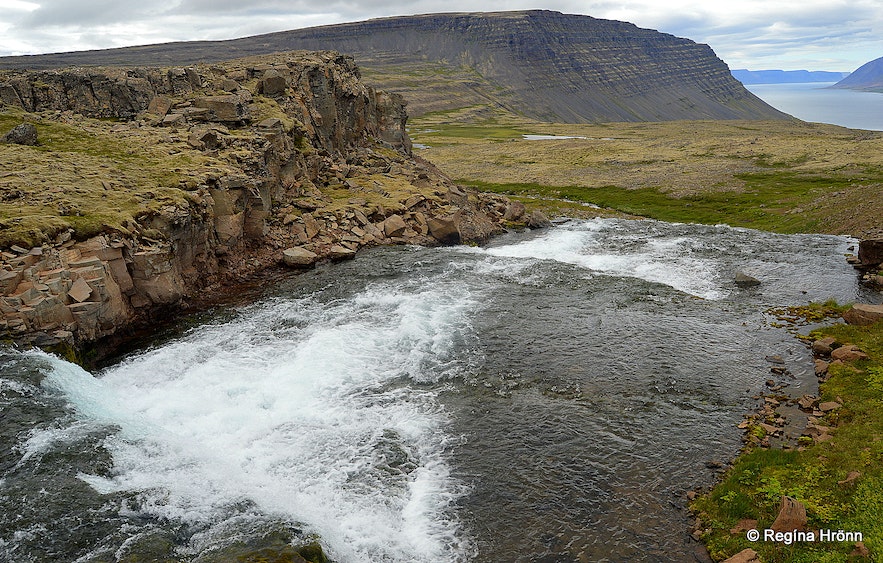 The waterfalls in Dynjandi come from lake Stóra-Eyjavatn, which is 350 meters above sea level, from which Dynjandisá river runs. Dynjandisá river is a direct runoff river and often such rivers have seasonal floods. 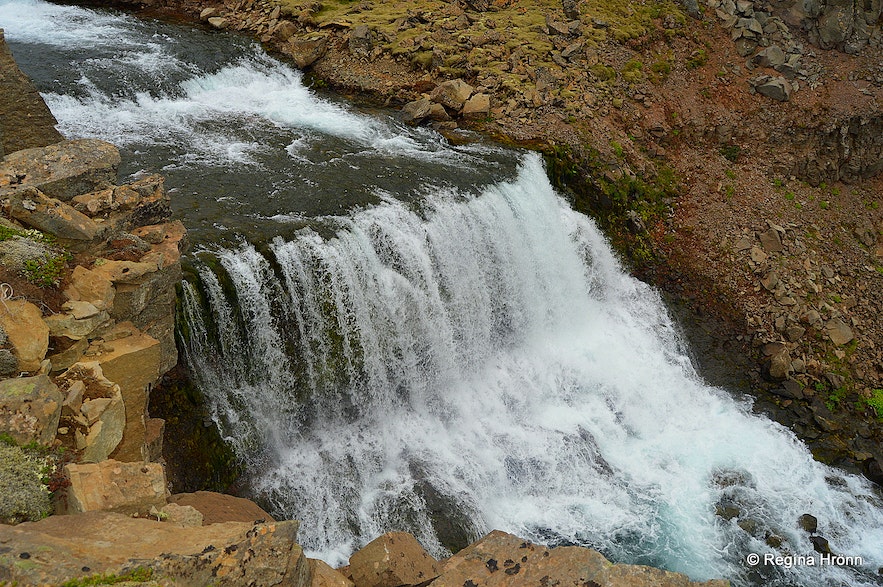 Dynjandisá river above Dynjandi waterfall, this might be Kálfeyrarfoss waterfall

Dynjandisheiði heath was opened for traffic on the 29th of March in 2017, but in 2015 it opened as late as in May, after being closed for 5 months! In my photo below you will see the steep, winding gravel road on Hrafnseyrarheiði heath. Just imagine what it must look like in the wintertime all covered in the deep snow! 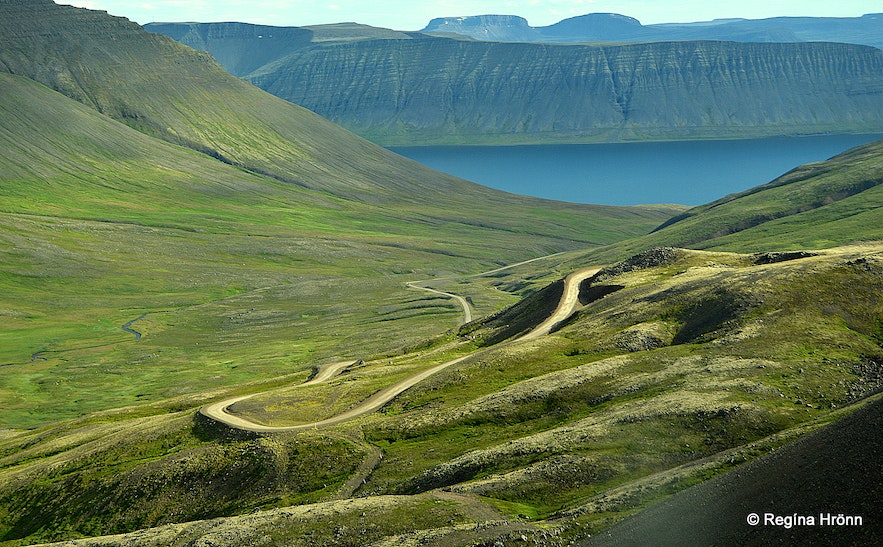 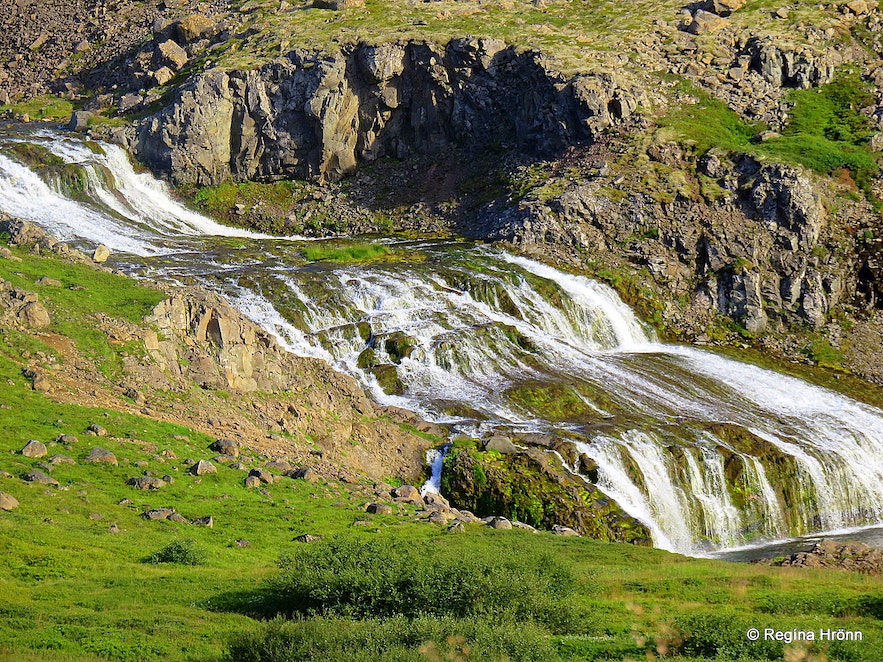 To reach the Westfjords you rent a car in Reykjavík and drive up to the Westfjords in a couple of days. Plan on spending at least 5 days here. Two summers in a row I spent 9 days in the Westfjords and we held a family reunion here in 2010. 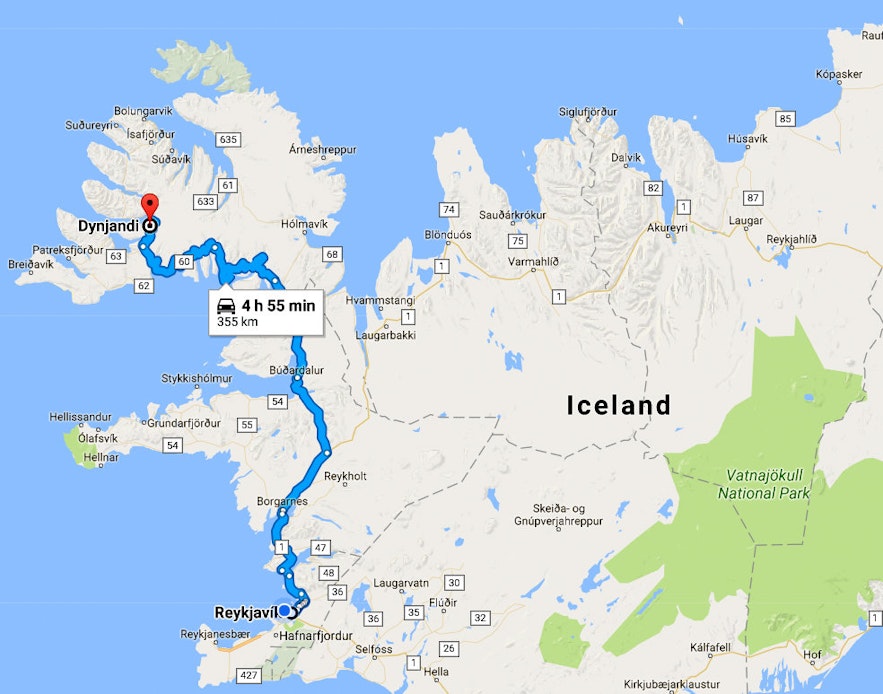 There are some guided tours to Dynjandi waterfall and a combined tour by Westfjord Adventures, which I have joined, called the Crown Jewel Jeep Tour | Kjaran's Avenue & Dynjandi, which I highly recommend.

The driver-guide will take you on a ride of the most dangerous road in Iceland!