A breathtaking view from the Top of Mt. Eldfell Volcano in the Westman Islands

The maroon Eldfell volcano - the Fire Mountain - was created in the volcanic eruption of 1973, in the Westman islands. The eruption started next to Vestmannaeyjabær town, on Heimaey island, and all the inhabitants of the island had to flee to the mainland of Iceland.

The volcanic eruption started on the 23rd of January 1973 and lasted until the 3rd of July! More than 400 houses were damaged and buried beneath the cinders and pumice - some of them even got buried under 3-10 metres of cinders! 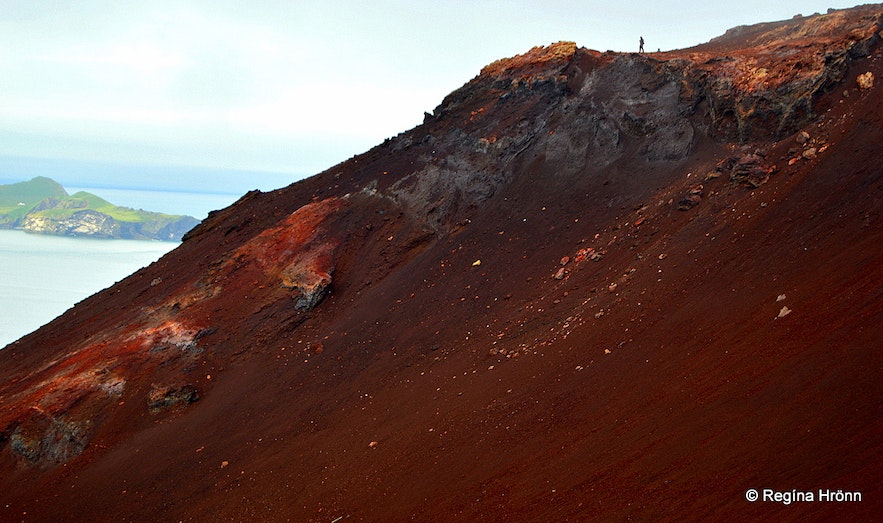 Some of these houses have now been excavated and one of them, you can see at the Eldheimar - the Pompei of the North Museum.

Mt. ELdfell was created in that particular volcanic eruption. It is more than 200 meters high and hovers over Vestmannaeyjabær town, constantly reminding them of this terrible, historic eruption.

Heimaey island, which is the largest and only inhabited island in the Westman island archipelago, got enlarged by more than 2 km2 by this thick lava flow (from 11.2 km2 to 13.4 km2) as it moved down into the sea. 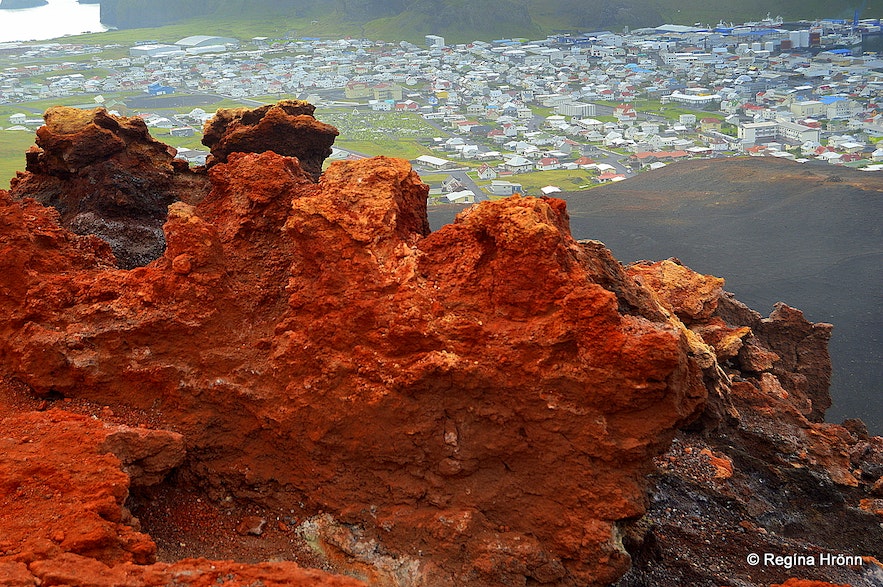 To gain a deeper insight, I hiked to the top of this maroon volcano. It is a bit steep, not too steep though, but I had to stop a couple of times to catch my breath and take in the beautiful view. Unfortunately, it was foggy during my visit, but still, I had a beautiful view of the Westman Islands.

I hurried as I couldn't wait to stand on the rim of the crater and see the colourful lava formations and the view from the summit. The hike up to the top is only 15 minutes and it is so worth it given the wealth of scenery and awe-inspiring rock colours. 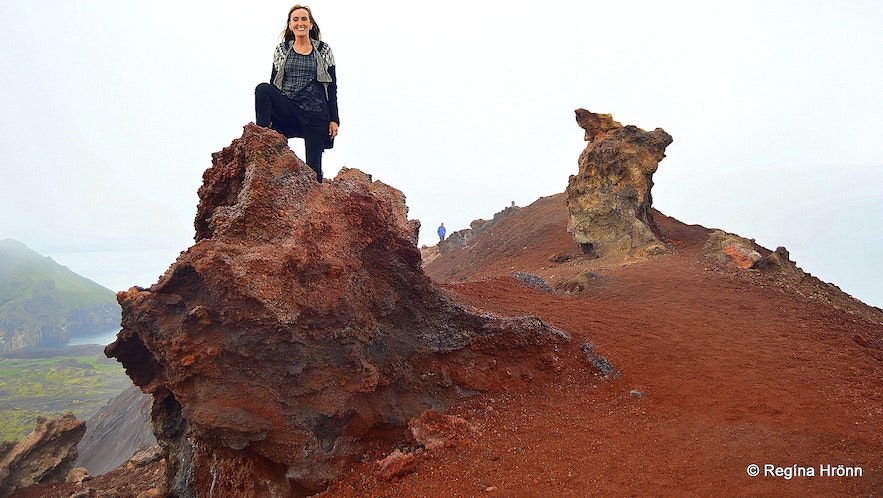 You will find big, very colourful lava chunks up here on the volcano. It truly is an amazing place; one of the out-of-this-world type locations where you can only say "WOW"!

The lava is so bright and takes on so many hues of the red colour that I was in awe. 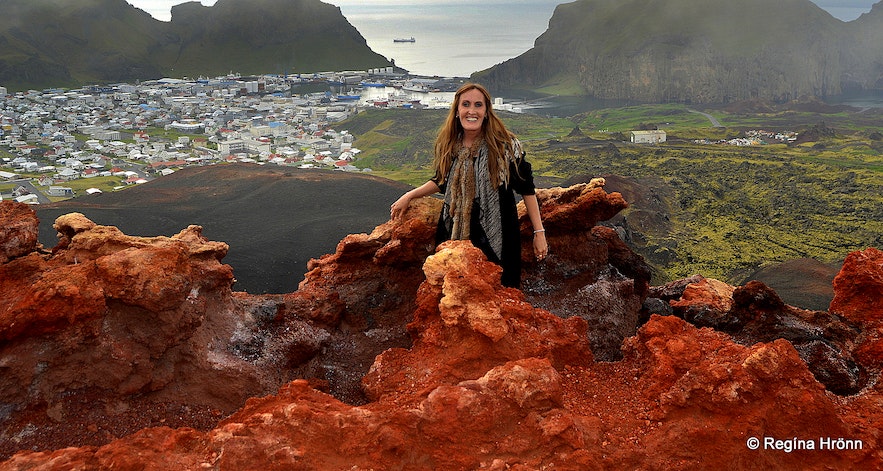 The lava here is amazing

The lava on top of Mt. Eldfell is still hot in places and steam was coming from underneath. Just imagine how hot this volcano still is, 46 years after the eruption!

After this cataclysmic event, from 1978-1988, the houses in the Westman islands were heated up with this immense heat from the volcano.

Every mountain in Iceland has to have a name and this new mountain couldn't be without a name for long. Our morning paper, Morgunblaðið, asked Icelanders to come up with a name for this new volcano and send it to them. 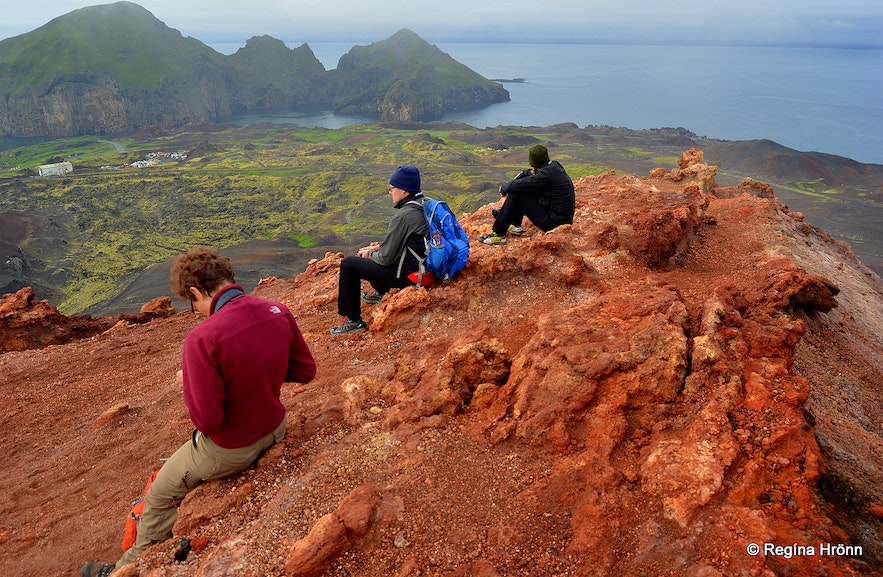 Many wanted to call the new volcano Kirkjufell or Church Mountain, but there is a very popular mountain by that name in the Snæfellsnes peninsula in West-Iceland. There was a church in this spot from 1269-1573 and a vicarage until 1837, now buried under 100 meters of lava.

This spot, Kirkjubær, is one of the historical spots in the Westman Islands. A new, Lutheran church, was built at Lönd in 1573 and called Landakirkja - and the church on this spot became a chapel.

Jón Þorsteinsson was a minister in the Westman islands from 1612 until he was killed by the Algerians pirates in the so-called Turkish raid on the 17th of July 1622. He hid with his wife, 2 children, and more people in a cave, but was found by the pirates, killed, and his wife and 2 children were captured and sold into slavery. 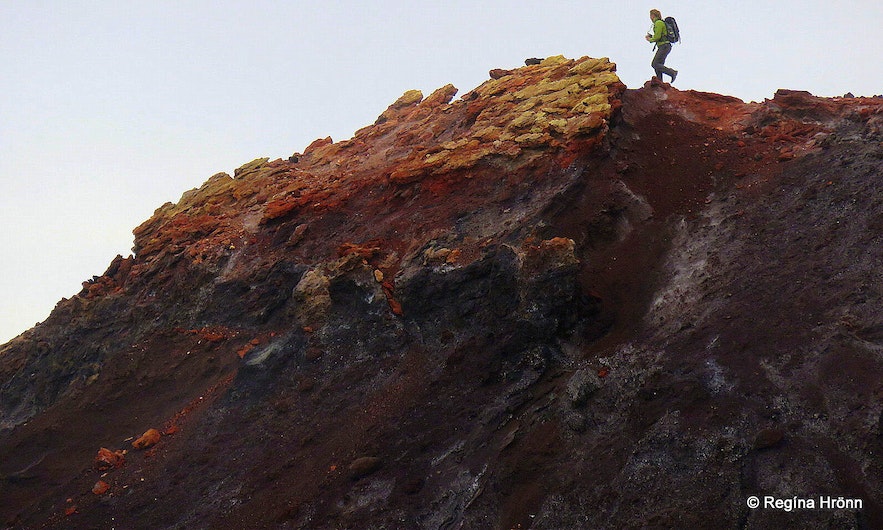 Jón's final words after 2 blows to his head were:  "Herra Jesú, meðtak þú anda minn" - or "Jesus, receive my spirit". The 3rd blow split his head open! After his murder, Jón Þorsteinsson got the name Jón the Martyr. Reading the story about his horrible fate and the fate of the poor islanders during the pirate attack makes my blood curdle.

There is one story though, which I remember hearing from the Turkish raid, which showed humanity on the behalf of the pirates. It tells of a woman who had just given birth by a rock and two pirates found her and the baby.

One of the pirates wanted to kill the woman, but the other one showed mercy, cut the tail of his cloak, and gave it to the woman in which to wrap her baby. This rock has been called Sængurkonusteinn rock since this incident, otherwise known as Rock of the Childbearing Woman. 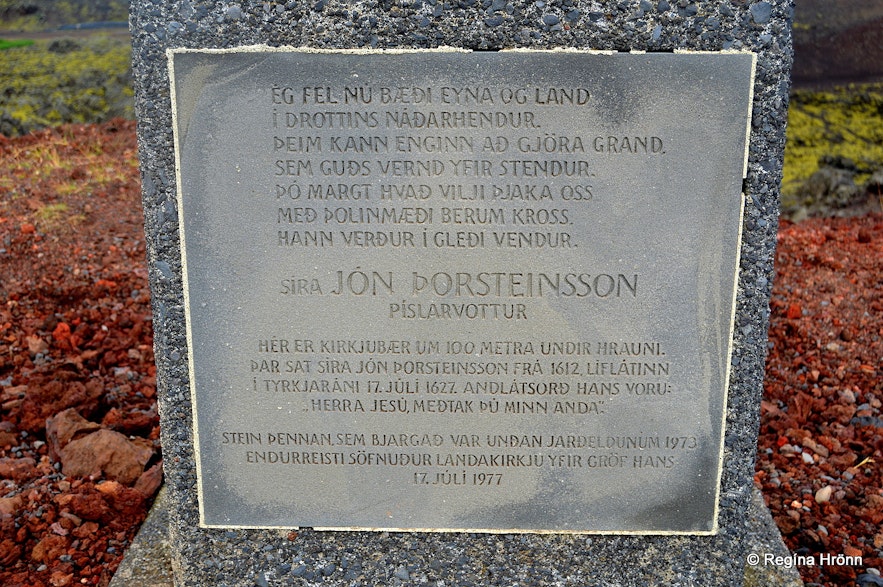 The memorial for Jón and Kirkjubær

You will find a monument in remembrance of Kirkjubær and minister Jón Þorsteinsson by the roots of the volcano Eldfell (see parts of it in my photo above). In 1816 almost half of the inhabitants of the Westman islands lived here at Kirkjubær.

This stone was rescued from the volcanic eruption in 1973 and restored above the grave of Jón by the congregation of Landakirkja church on the 17th of July 1977.

Now back to the name suggestions for this new volcano. Amongst the 20+ name suggestions, which were sent to Morgunblaðið newspaper, were Bæjarfell, Hrollur (Tremor), Þrymur,

and Gribba (Bitch). These names show what Icelanders thought of this lava-spewing mountain. 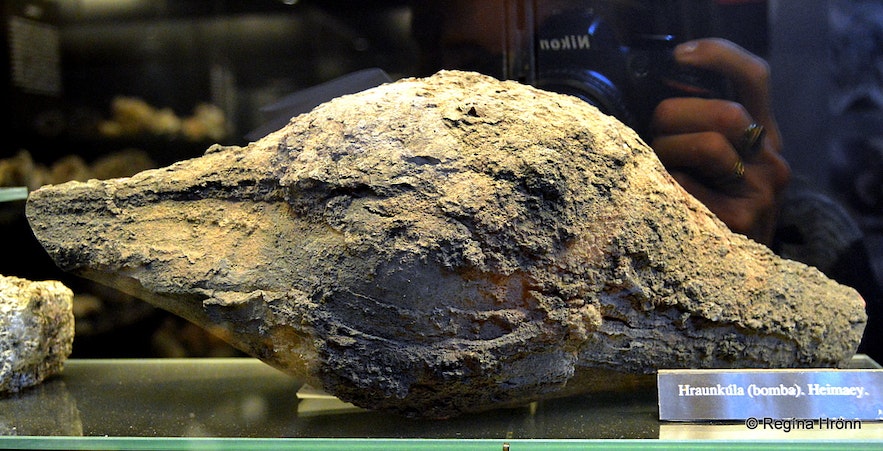 The name Eldfell won, reminding people of the volcanic eruption which shut out lava bombs which put the homes of the islanders on fire! I found this lava bomb on display at the Sæheimar aquarium.

Just imagine these lava bombs flying high up in the air at great speed and twirling around themselves - thus becoming oval in shape! As if the lava flow wasn't enough! These dangerous lava bombs set many houses on fire during the volcanic eruption in 1973. 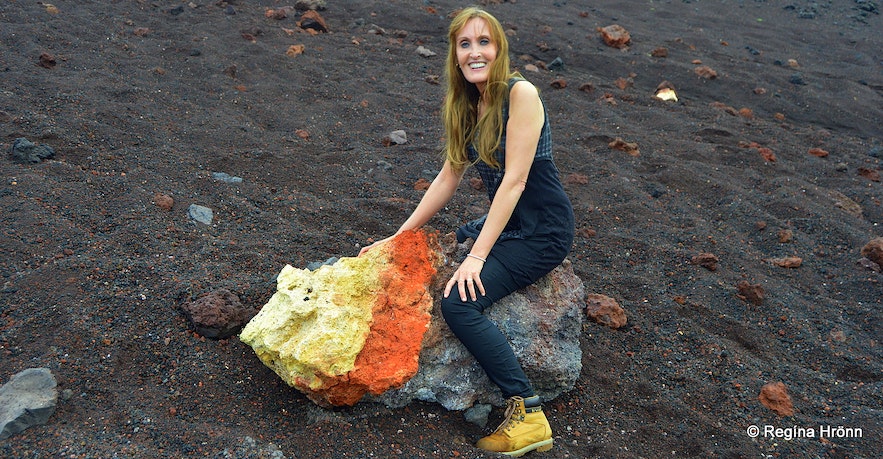 A colourful lava rock at the roots of Eldfell volcano - when I visited in 2020 it had been ruined :(

I am always amazed to see the big chunks of this colourful lava - this lava looks so beautiful and this area is so serene, but just imagine what it must have looked like during this terrible volcanic eruption back in 1973!

I sit on this colourful lava so you can see how big it really is. By now I had descended from the volcano and was exploring the roots of the volcano.

On the guided tour, which I have told you about in another travel-blog, our local guide told us that the lava is first black, then red, and sulfur lava, which is orange to yellow, means the end of the volcanic eruption. So the colours of this lava rock above mean something to geologists. 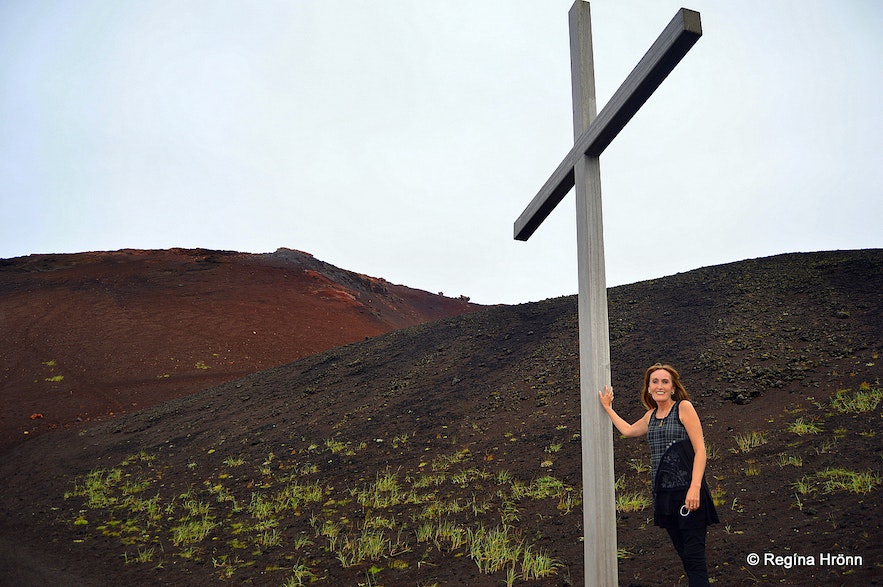 There is a big wooden cross by the roots of the crater of Eldfell volcano. You might wonder why it was erected in this location. It was erected after a fatal accident happened on this spot. A man was working on the revegetation of Heimaey island after the eruption and his machinery tipped over.

Every year, at the celebration of the end of the volcanic eruption (goslokahátíð) in Eldfell volcano on the 3rd of July in 1973, a service is held on the first Sunday in July by this big cross.

I had a view of Helgafell volcano when I was hiking to the top of Eldfell volcano, but as I mentioned earlier, then it was foggy on this day, which gave an unwanted blue hue to my photos :( So I add a photo of Helgafell, which I took on another visit to the Westman islands. 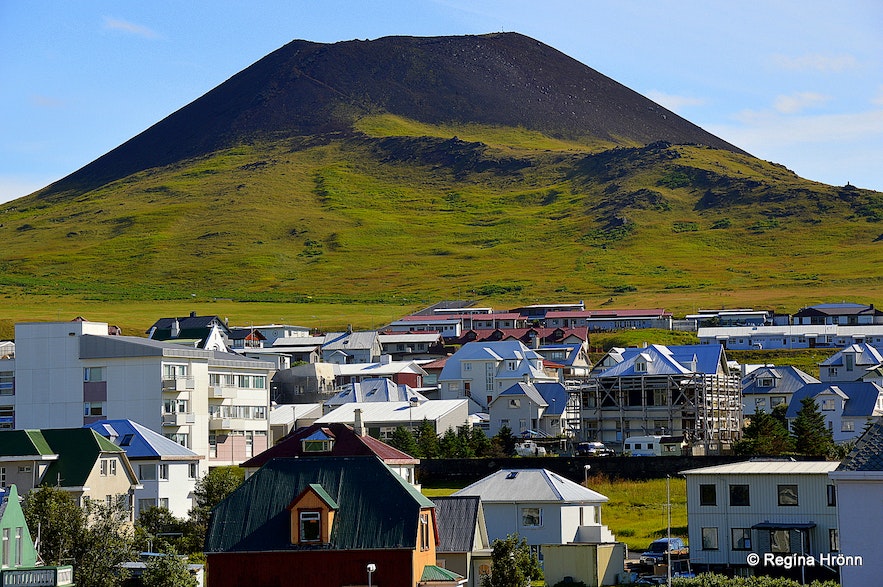 It must have been strange sitting on top of a dormant volcano watching a new volcano being born, while the old volcano trembled and shook from the seismic activity from the birth of the new volcano! 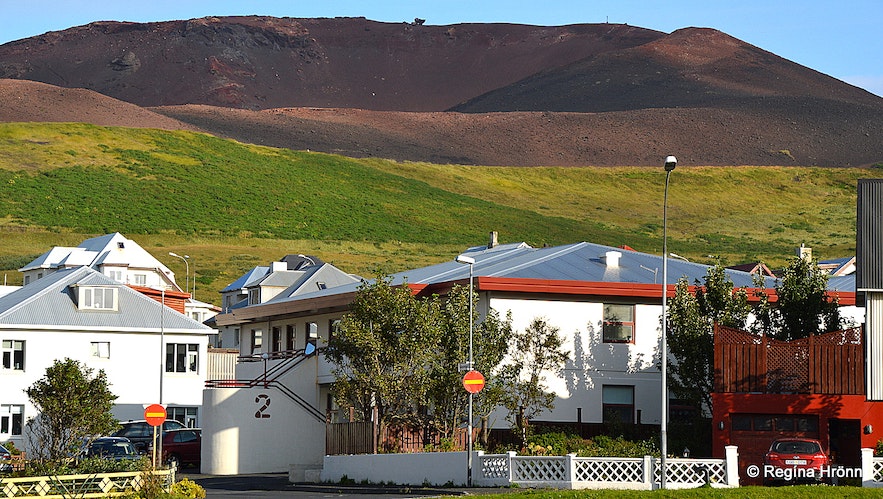 Eldfell volcano - see how close it is to the houses

The name, Helgafell, is said to derive from way back to the Settlement of Iceland in 874 when the blood-brothers Ingólfur and Hjörleifur came to Iceland. Hjörleifur had brought with him Irish slaves, who killed him in 875 and fled from the mainland to the islands. You can read about Hjörleifshöfði in my travel-blog: 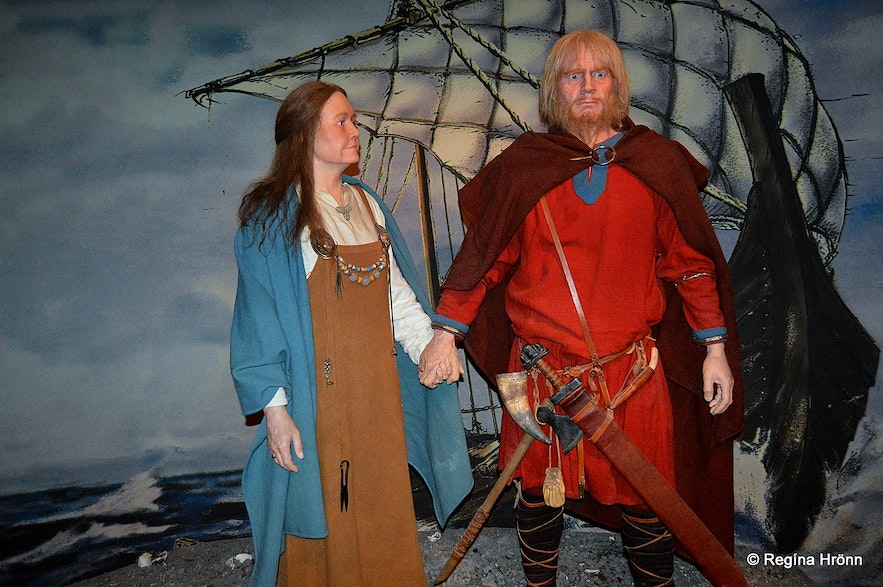 Hallveig and Ingólfur at the Saga Museum in Reykjavík

The settler of Reykjavík, Iceland's capital city, Ingólfur Arnarson (see my photo above, which I took at the Saga Museum in Reykjavík), followed the Irish slaves to the islands after they killed his blood-brother and brother-in-law, Hjörleifur Hróðmarsson.  Ingólfur and his men tracked down the slaves, surprised them as they were eating, and killed them.

One of the slaves, Helgi, was killed on Helgafell, and thus the volcano got its name.

If you want to know more about the volcanic eruption in the Westman islands a visit to the Eldheimar Museum - the Pompei of the North is a must. There you can see a house that was buried under a heavy load of lava and ash, but many of the Islanders lost their homes this way and there are still many houses buried deep under layers of ash, as I told you earlier in this travel-blog. 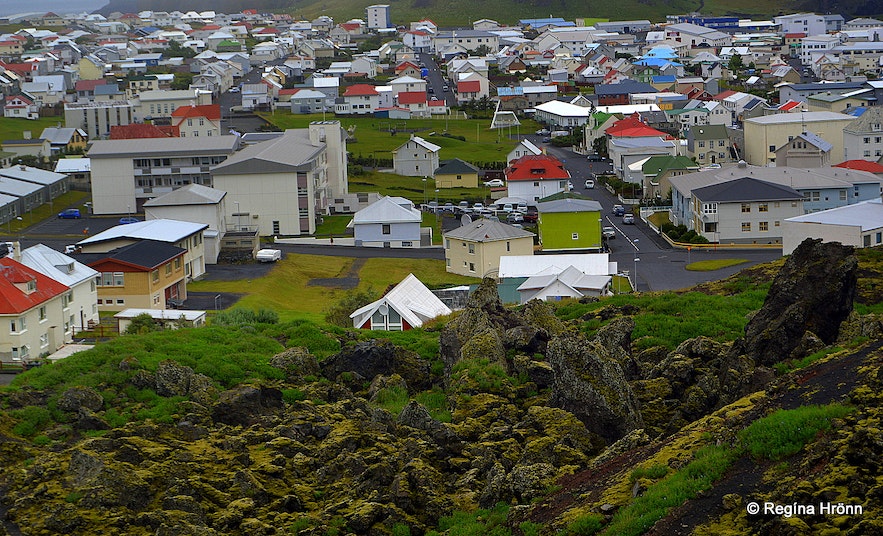 See how close the lava is to the houses

Westman Islands - Sæheimar - Have you ever met a Puffin Up Close and Personal?

To visit the Westman islands you can rent a car in Reykjavík  and drive to Landeyjahöfn and catch the ferry Herjólfur over to the islands and take tours on the island itself like I did. Or explore it on your own.