Mt. Kirkjufell & Kirkjufellsfoss in Grundarfjörður - the most photographed Mountain in Snæfellsnes

Mt. Kirkjufell (463 m) is the most prominent mountain in Grundarfjörður and a landmark of the fishing town. The mountain is free-standing and referred to as the most beautiful mountain on the Snæfellsnes peninsula - some even say the whole of Iceland. At least it is the most photographed mountain. 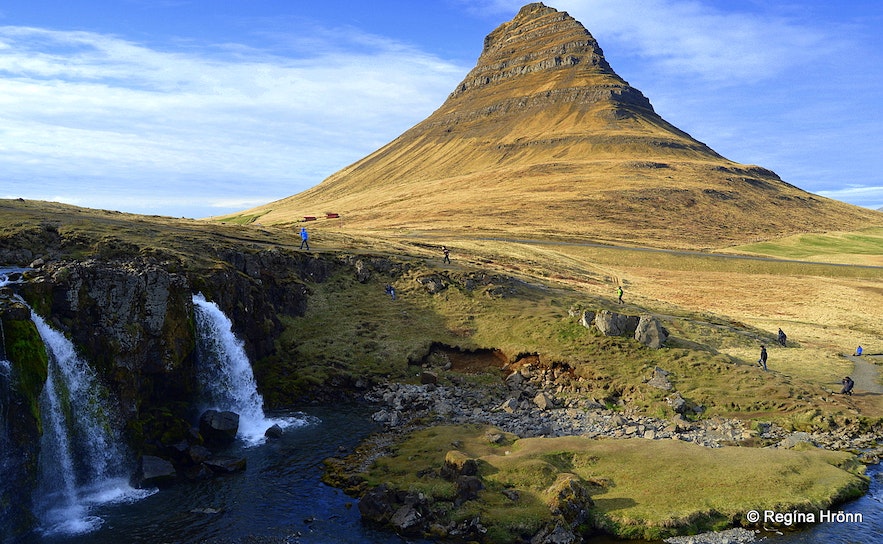 Danish sailors, who frequently visited this area in the olden days called this dignified mountain "Sukkertoppen" or the Sugar Top. And the lower mountain they called the coffin. These names did not stick ;)

For the past few years, Mt. Kirkjufell and Kirkjufellsfoss waterfall have become the most popular place for a photo stop here in Grundarfjörður. You will see crowds of visitors with tripods and cameras taking photos like the one above, i.e. from this angle with the waterfall in front. 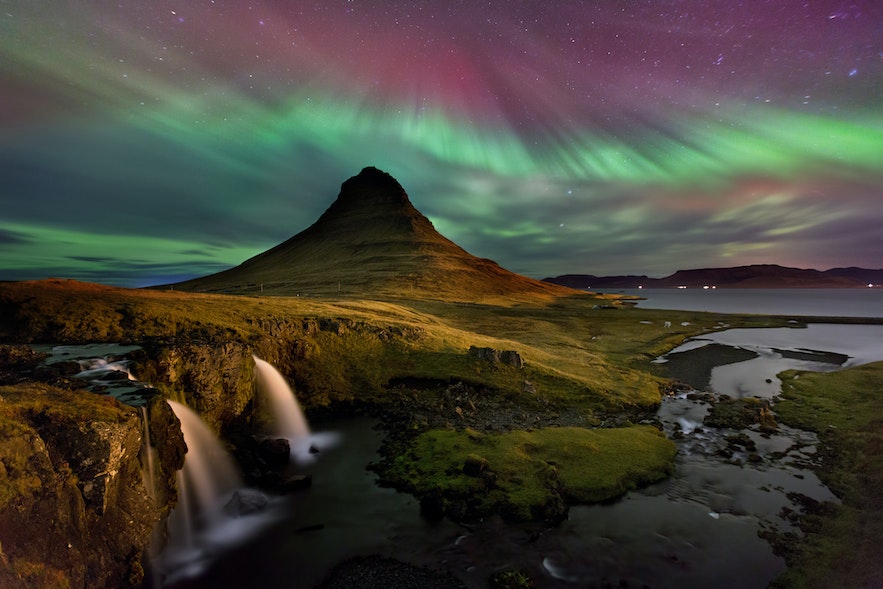 The staff at Guide to Iceland calls this mountain Iurie Belegurschi's mountain, as he has taken the most beautiful photos of Mt. Kirkjufell and organizes very popular photo tours.

Above you can see one of Iuri's beautiful photos of Mt. Kirkjufell with the Northern Lights.

I, on the other hand, call this mountain my grandfather's mountain ;) 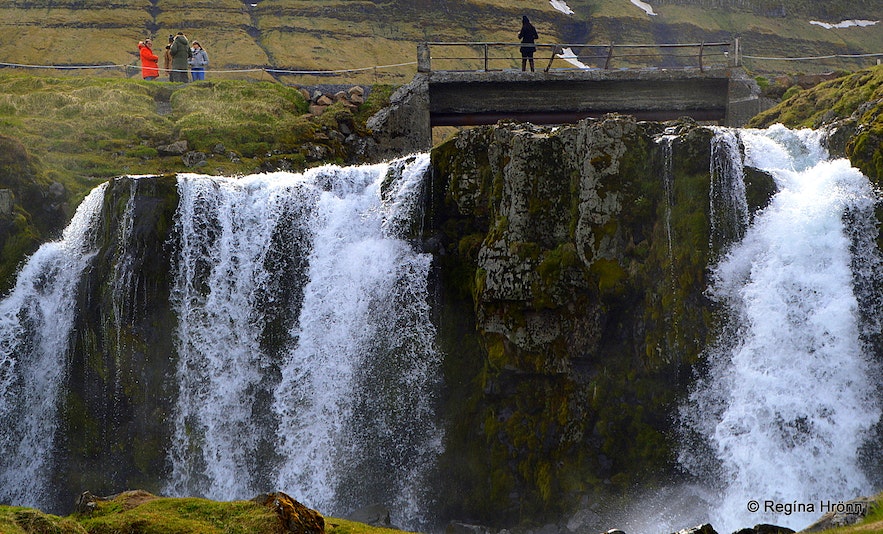 The old bridge lies on top of the waterfall

The old road was located on top of the waterfall, where you can see the old bridge, so the waterfall wasn't that apparent until the road was moved.

Iceland has got so many beautiful waterfalls and this one has got a short drop, so we didn't pay much attention to it. But from this angle, the waterfall in the front and the distinctive mountain in the background makes for a beautiful photo - and now everybody wants a photo like that :) 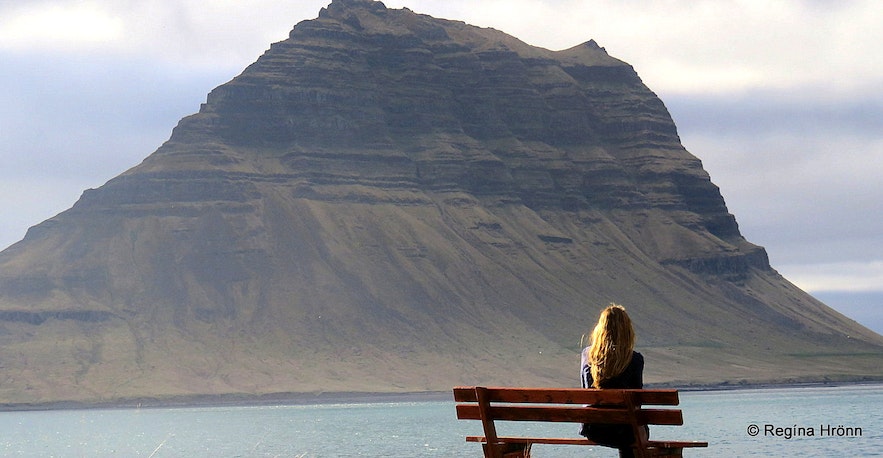 My grandfather was raised here in Grundarfjörður and on the wall in my living room, I have a painting of Mt. Kirkjufell, which a well-known Icelandic painter painted for him. "My grandfather's mountain" as it were, Mt. Kirkjufell, has now become one of Iceland's most photographed mountains.

I have always loved it and am glad that our visitors like it too - it is for sure a very picturesque mountain. 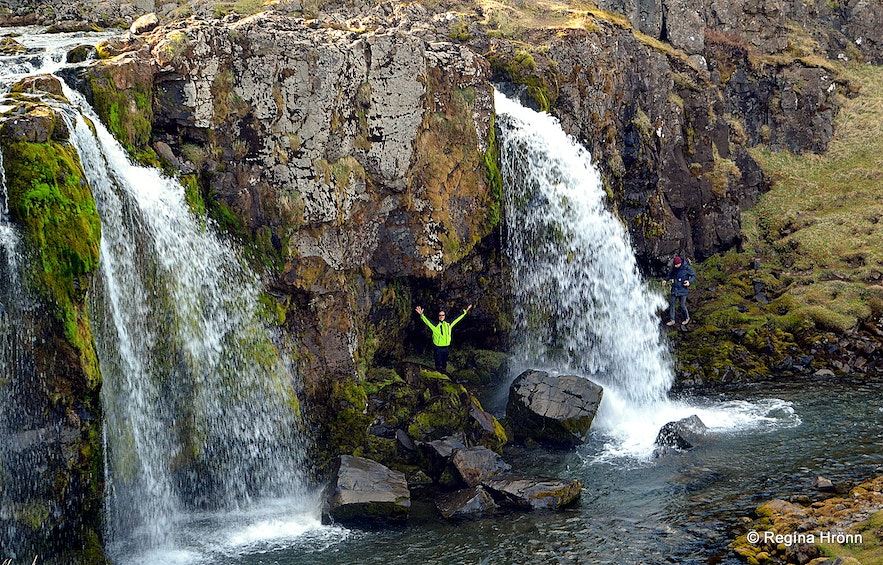 Our guide by Kirkjufellsfoss waterfall

The name of the river is Kirkjufellsá river, which runs from a volcano called Helgrindur. There are 3 waterfalls in this river, all of which have the same name, Kirkjufellsfoss waterfall.

Earlier on you could walk down to the waterfall, but that path has now been closed due to increased traffic. I took a photo some years ago of the guide of Nicetravel, running down the hill and appearing in between the waterfalls. I joined Nicetravel's Snæfellsnes National Park Day Tour twice, and have written a travel-blog about the tour.

I include this photo as it shows how big this small waterfall really is in comparison to a human being. So maybe we should not be calling it a small waterfall when we are so much smaller ;) 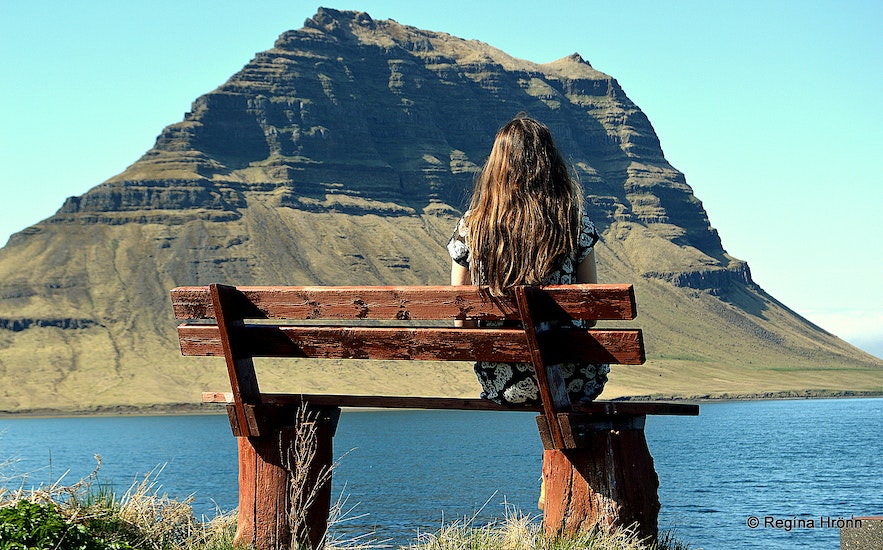 On the bench admiring Mt. Kirkjufell

Now, in my photo above you can see my favourite angle of Mt. Kirkjufell;  the bench, and Mt. Kirkjufell in the distance. This bench can be found at the end of one of the residential streets and we always go there and take a photo like the one above.

There is nobody here as opposed to the myriad of people by the Kirkjufellsfoss waterfall. 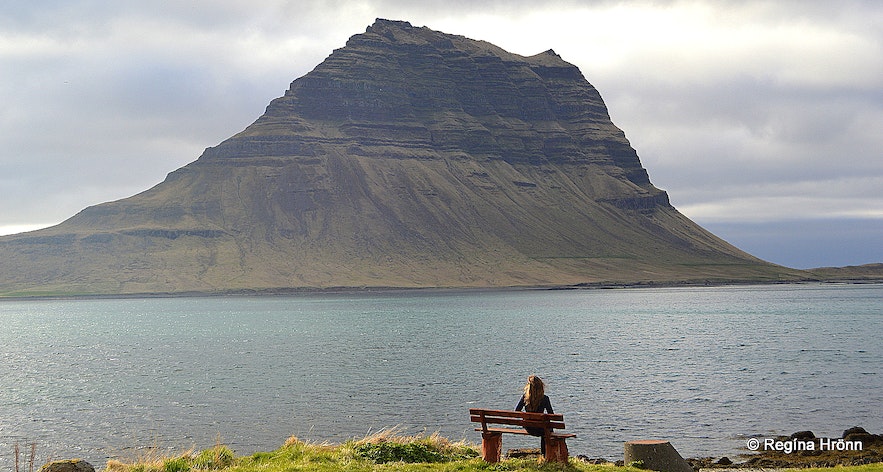 Another photo of the bench and Mt. Kirkjufell ;)

But I do understand why people would like to have a photo of the waterfall and Mt. Kirkjufell together, it has become a classic photo. This land belongs to farmers in this area, and the intrusion on their land has become way too much in a short amount of time.

In 2014 the landowners accepted that a parking lot be added to their land and trails to the waterfall from the parking lot. Then the traffic increased to an extent which could not have been foreseen.

At times there are even small traffic jams here when the parking lot is full. I have seen many cars parked by the road, but do refrain from doing so as it increases the risk of accidents on the road and is of course forbidden.

Maybe it is better to find another photo stop as we do not want to cause the farmers any aggravation. Some visitors even leave rubbish behind and show disrespect, such as pooping in the parking lot! Finally, in September 2019 a new parking lot was taken into use :) 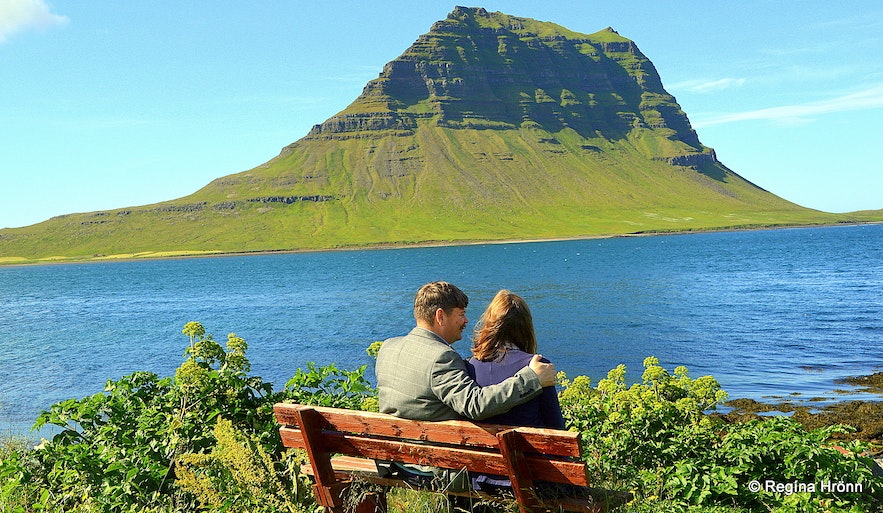 With my husband on the bench admiring Mt. Kirkjufell

Some people hike on Mt. Kirkjufell, but that is a very difficult hike and we had seen 2 fatal accidents here lately; a woman in 2017 and a man in 2018. And several accidents :( So please be very careful here, we want our foreign visitors to return home safely from their travels in Iceland. 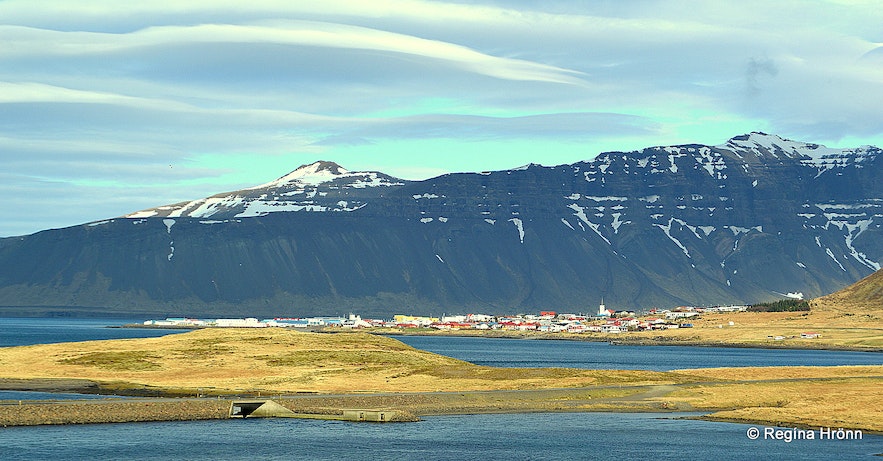 Grundarfjörður in the distance as seen from Kirkjufellsfoss waterfall.

I have relatives here and have often camped at the campsite at Kverná, which is owned by my father's cousins.

I have written a lot more information about Grundarfjörður town in my travel-blog the Magical Snæfellsnes peninsula in West-Iceland - Part IV.  Including the church and more interesting things to see and do in this lovely town.

In this travel-blog, I am mainly focusing on Mt. Kirkjufell and the Kirkjufellsfoss waterfall. 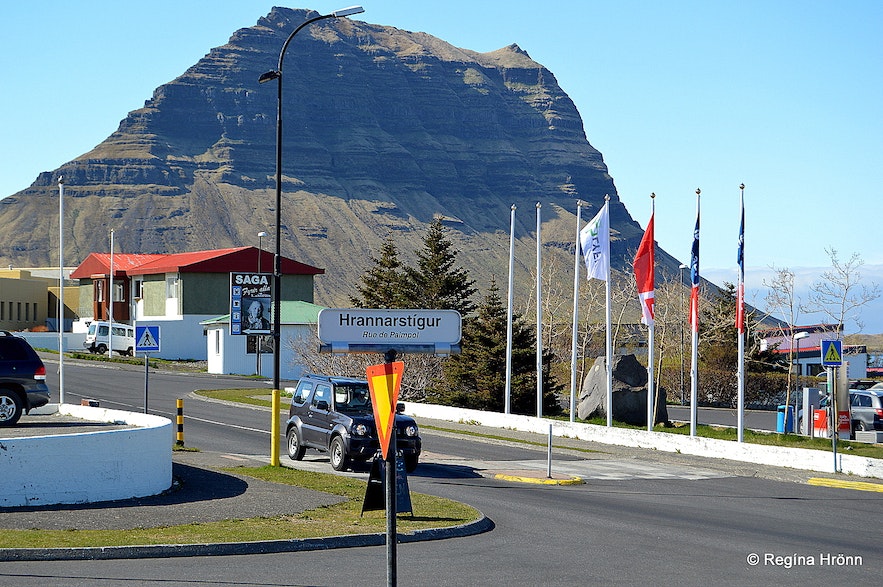 Grundarfjörður is on road 54 on the north coast of the Snæfellsnes peninsula - 185 km from Reykjavík.

You can either rent a car in Reykjavík or join one of the myriads of guided tours to the Snæfellsnes peninsula. 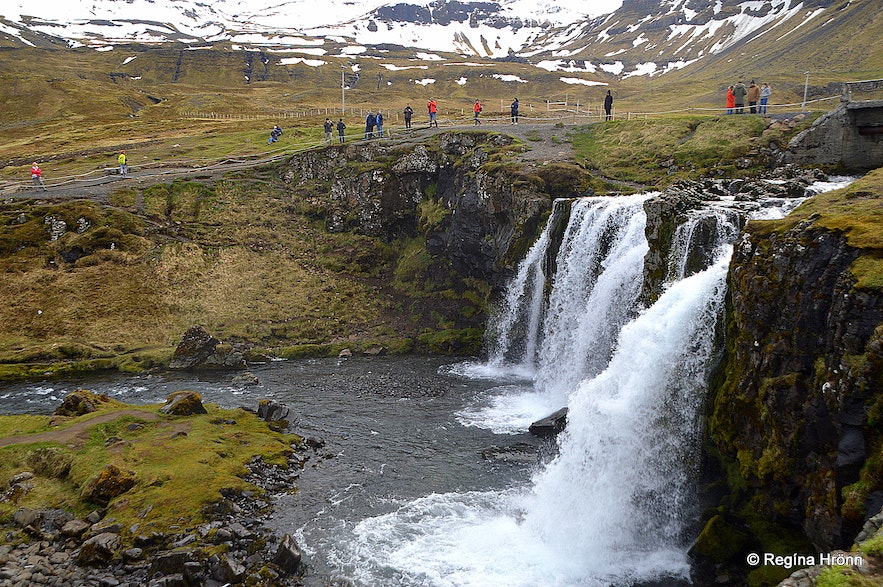 I have written a series of travel-blogs about Snæfellsnes in chronological order as there is just so much history and places of interest everywhere you look:

Have fun in my grandfather's town :)