It is a pure gem of nature and hidden in the sense that it is on Skagi peninsula, which is off the beaten track, but so worth the detour. 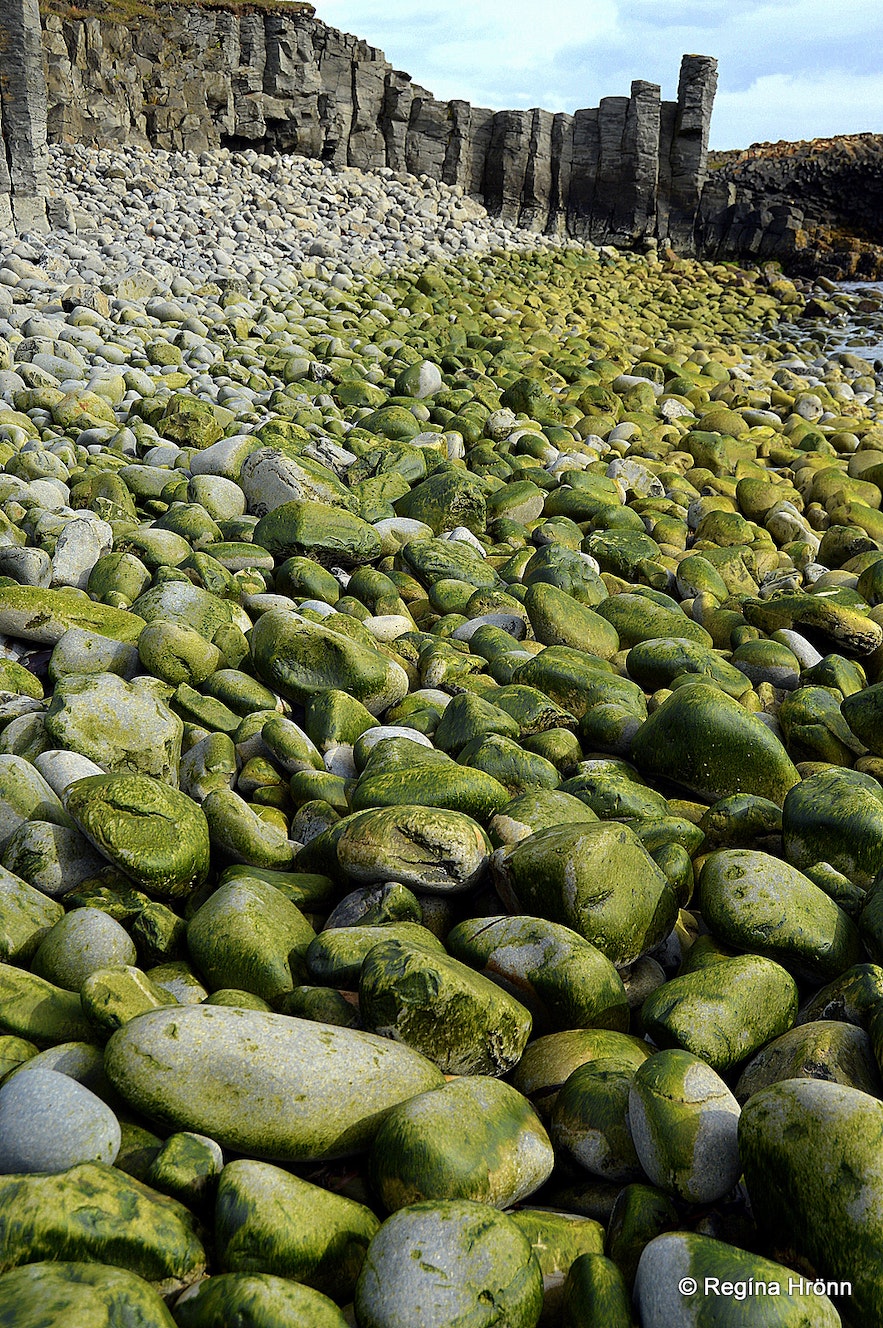 The basalt columns are so diverse here and take on so many forms that I can assure you that you will come away from this beautiful place with fantastic photos.

This beautiful phenomenon, basalt columns, form when thick basalt lava flows, cools down and condenses, and splits into columns, which most often are hexagonal. Such a beautiful work of nature, pure art. The basalt columns in Kálfshamarsvík formed around 2 million years ago. 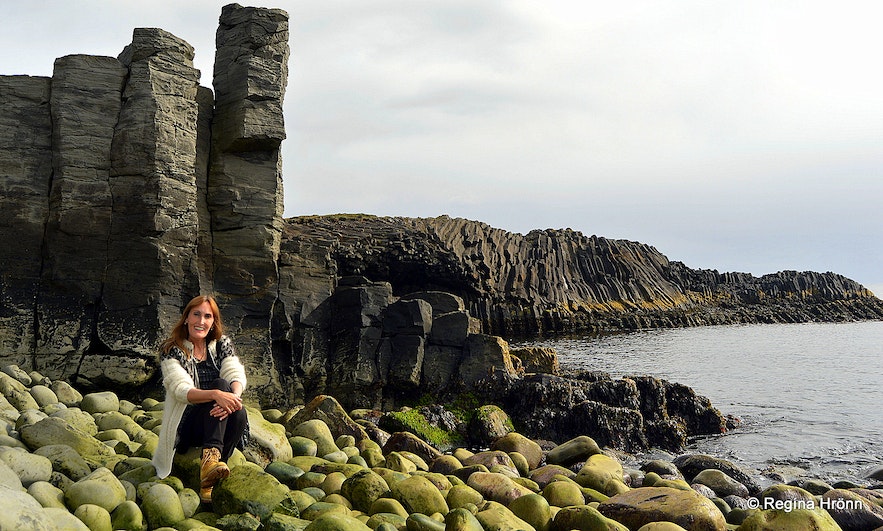 You can see basalt columns in many other places in Iceland, but I think the columns in Kálfshamarsvík surpass everything I have seen in Iceland before.

The only basalt column location equal to Kálfshamarsvík, in my opinion, is the Stuðlagil canyon, which I visited in 2020: The Spectacular Stuðlagil Canyon - the Gem of East Iceland. 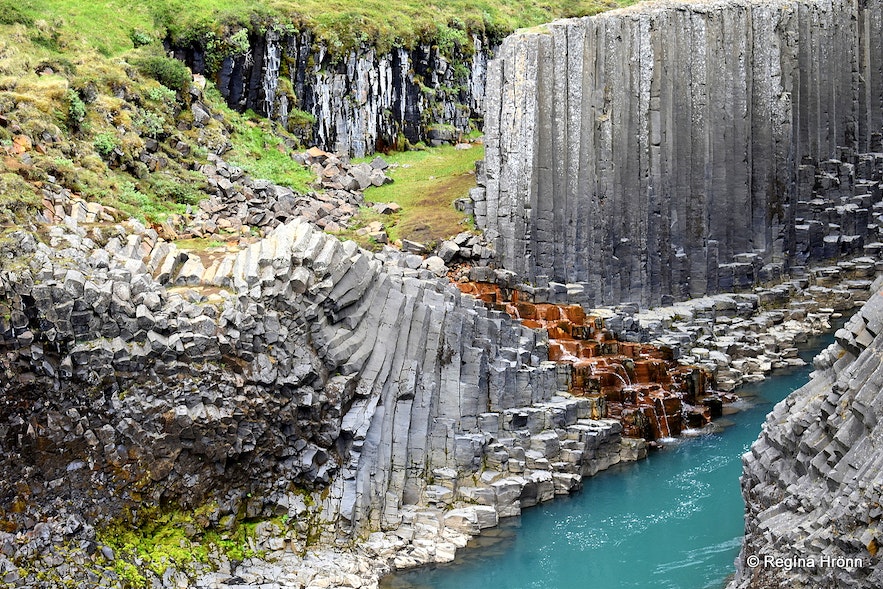 The history of Kálfshamarsvík is special, as around 1900 there was a busy fishing station here and a hamlet. One can see the ruins of many houses in this area. The hamlet was named after the bay by which it stood, Kálfshamarsvík.

Natural harbour facilities were excellent at this location, the fishing grounds are close by and the beauty of this bay is unequaled. 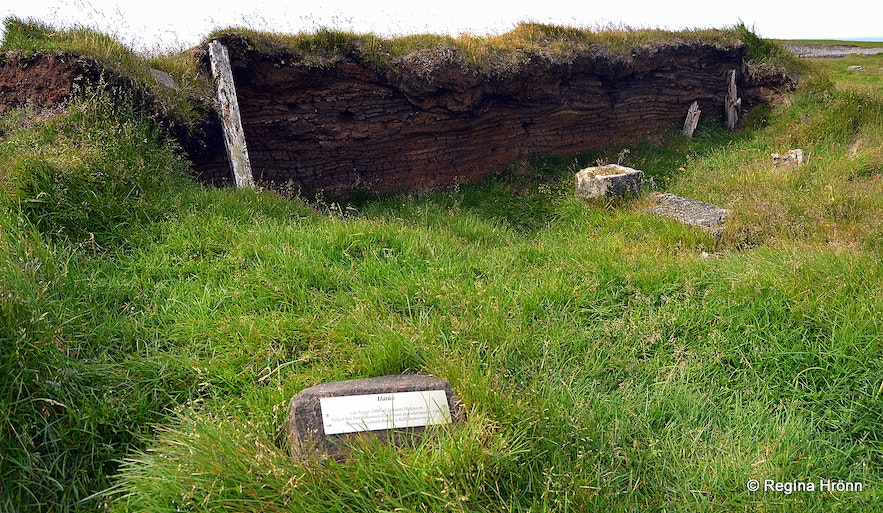 Information signs, resting on basalt columns, have been put up by the ruins, making for an interesting historical walk. Here one can read up on what kind of buildings stood where and who lived in which building (the information signs are in Icelandic though).

Truly well done and this information makes this hamlet of some 100 inhabitants come alive for a while.

The Höephners Trading (a Danish company) at Skagaströnd bought half of the land in Kálfshamarsvík in 1890 and opened up a Bacalao factory. At the factory, salt cod was prepared for the Mediterranean market. 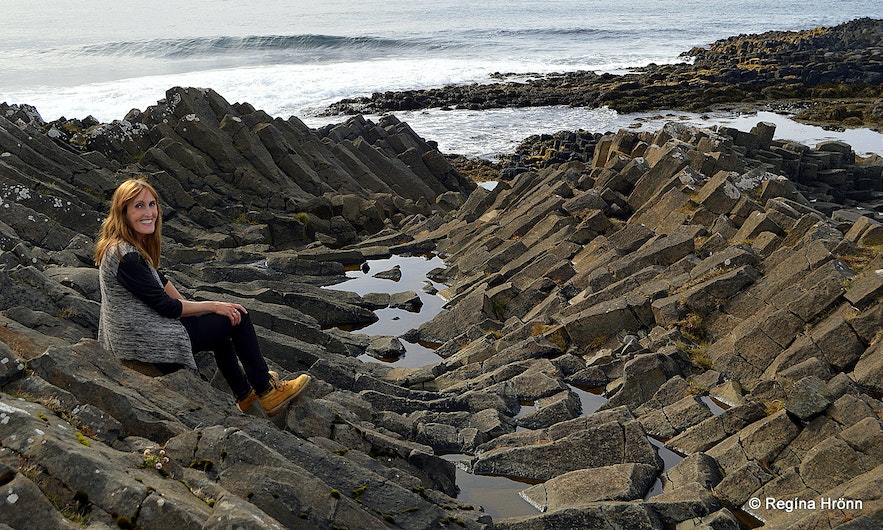 Later a school was built, a community meeting place and small shops opened up, so this was a proper village. And some livestock was kept here, cows, sheep, and even goats.

Icelanders were severely affected by the great depression, which started in 1930 and lasted until 1940. Export became difficult, resulting in economic contraction and unemployment. The small settlement in Kálfshamarsvík got affected by the depression as the price of salt cod plunged. 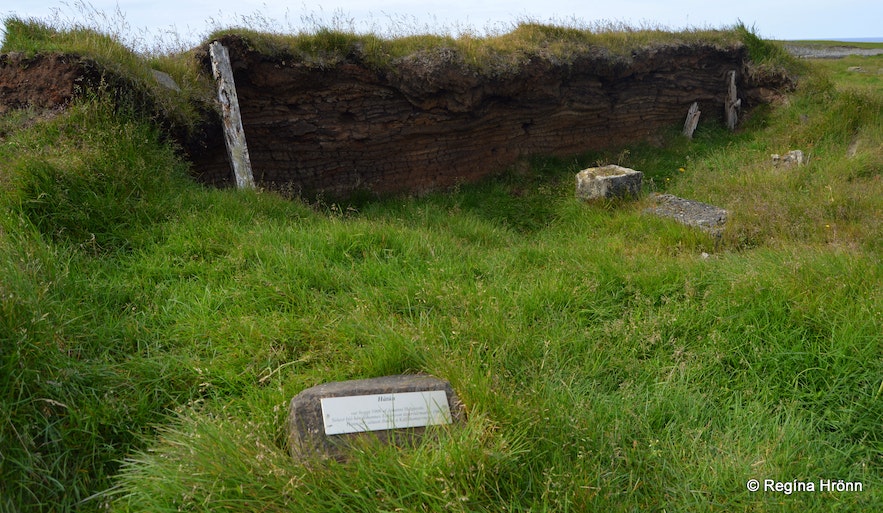 The Civil War in Spain was also a big factor, as a big part of the salt cod was exported to Spain.

This small hamlet started having problems in 1930 and was almost totally abandoned by 1940. But also a big factor in the decline of this hamlet was harbour construction in the close by village of Skagaströnd.

The last inhabitant moved away from Kálfshamarsvík in 1961. Some of the inhabitants took their houses with them when they moved to Skagaströnd, that is why only the site remains. Here you can also see the ruins of many turf farms - beautifully built.

I always admire the workmanship of the turf farms and will hopefully next year be going on a course on how to build a turf house :)

In 1994 three houses burnt down in Kálfshamarsvík, probably caused by electricity. They stood in a cluster and were used as storerooms.

There is a lighthouse in Kálfshamarsvík, built in Art Deco style in 1940, and taken into use in 1942. An older lighthouse stood here, built in 1913. 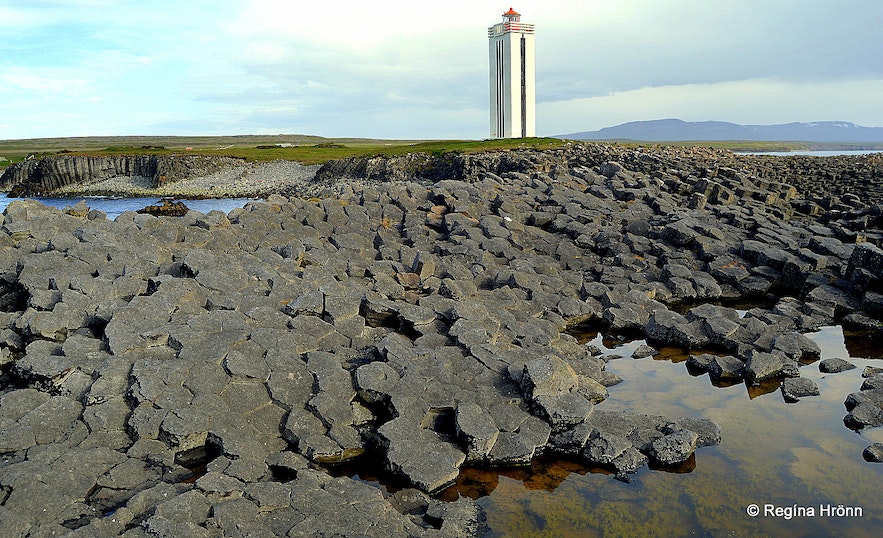 I have seen very similar lighthouses in other parts of Iceland, both South-Iceland and in North-East-Iceland, as this building style was popular here from 1939.

See also my travel-blog: Hraunhafnartangi and Þorgeirsdys - one of the Northernmost Spots on the Mainland of Iceland

Axel Sveinsson designed the lighthouse, but he got his inspiration from the State Architect of Iceland, Guðjón Samúelsson. The whole area by the lighthouse is dotted with the most awe-inspiring basalt columns, giving rise to many spectacular photo opportunities. 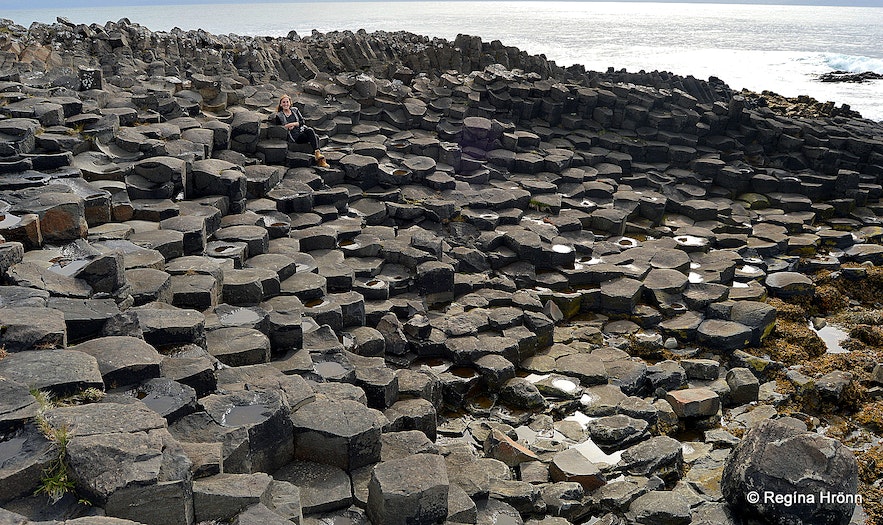 Behind the lighthouse, you will find the most extraordinary floor made of the tops of the basalt columns. It almost looks like it is a man-made amphitheater

Further down the cove, it is possible to walk down to a large wall of basalt columns, Kálfshamar rock. It is a bit of a clamber walking on these oval rocks on the beach, but I did it anyway.

The basalt columns bend in this part of Kálfshamarsvík. 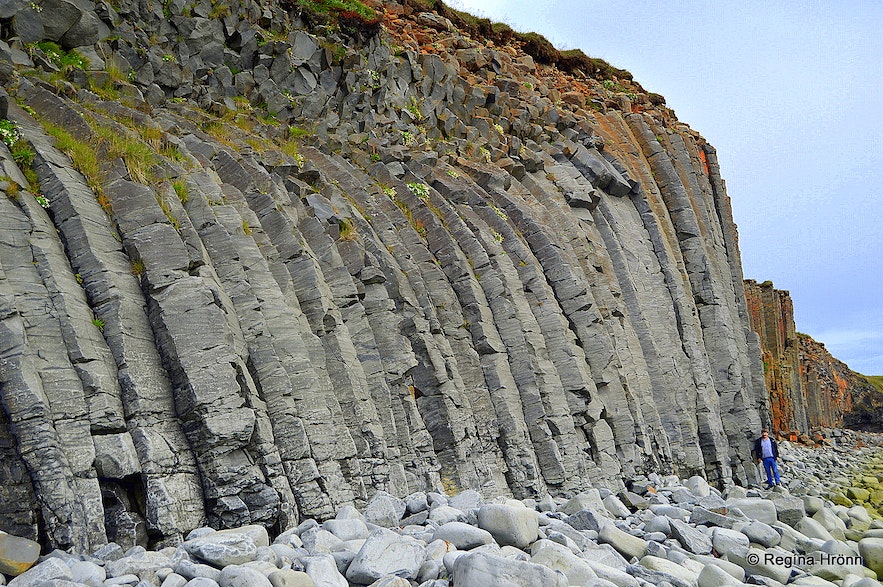 One can see how pieces of the columns have broken off, so it is not even safe to walk in this area, you might have a piece of a basalt column falling on your head.

So maybe it is better to stay away and admire this basalt column wall from afar?! 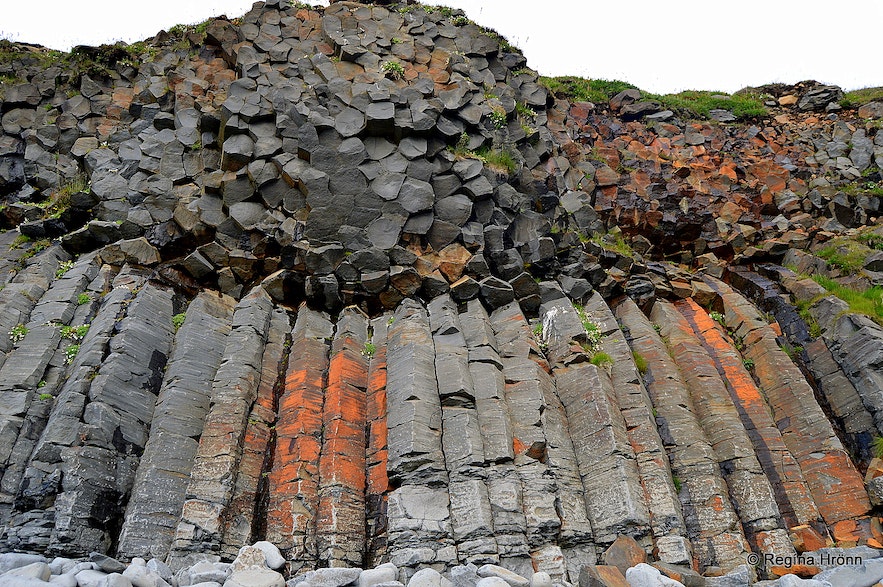 This area is said to be haunted, so don't camp here!  Anyway, camping is only allowed on campsites in Iceland.

Kálfshamarsvík stands on the northwest side of the peninsula Skagi, some 23 km away from Skagaströnd village. I have written another travel-blog about Ketubjörg on the northeast side of Skagi.

I was coming from Ketubjörg last time I visited Kálfshamarsvík, but I give you the directions from Blönduós village, which is located by ring-road 1. 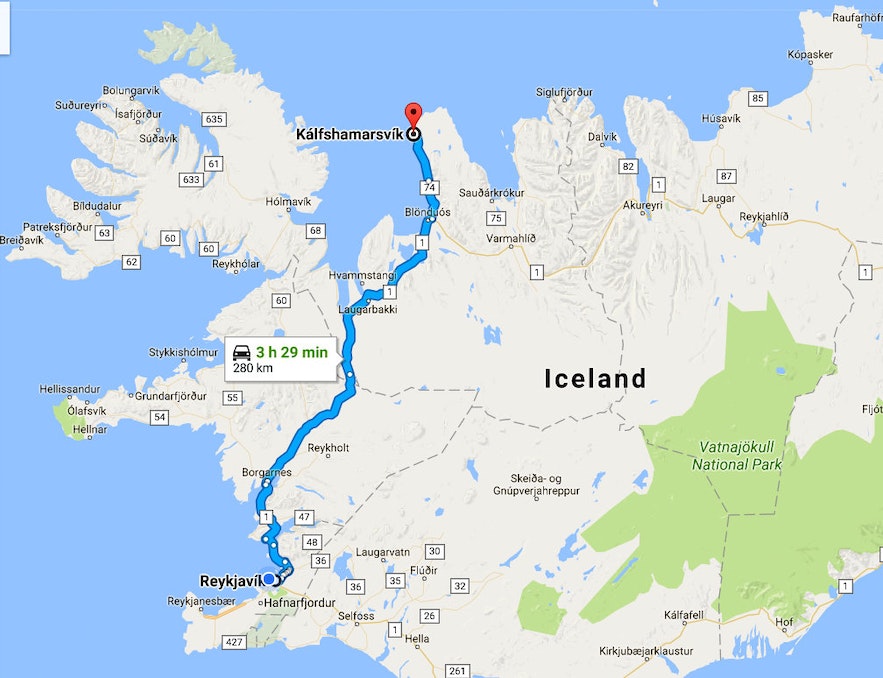 You can rent a car in Reykjavík and drive up north in 3.5 hours. From ring-road 1 turn on road 74, which becomes 745 north of Skagaströnd village. The road from Skagaströnd is a gravel road.

Some 23 km north of Skagaströnd you will find Kálfshamarsvík and there is only a short drive down to the cove, where you can park your car.

Have a lovely time at Kálfshamarsvík :)