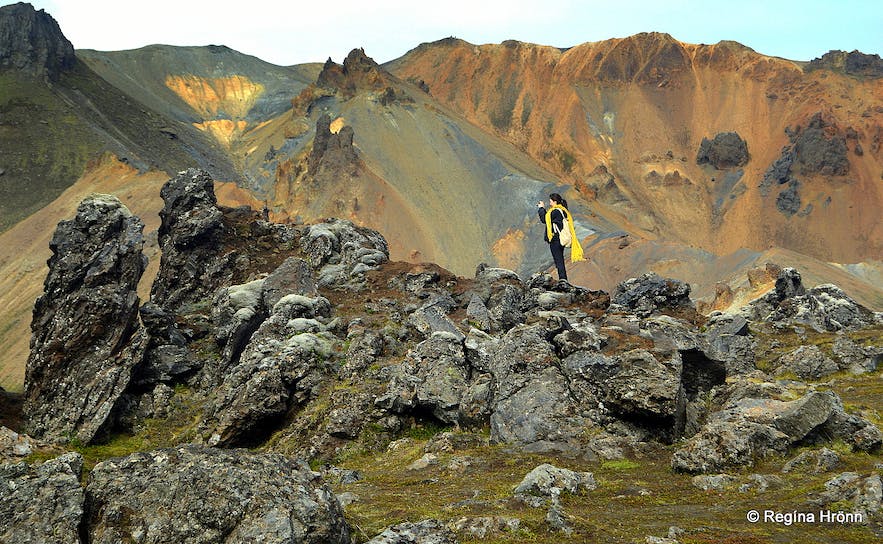 You can visit Landmannalaugar on a bus tour, a super jeep, join a scenic flying tour or just hop on a bus and explore it by yourself with the Golden Hikers Bus Pass | Return Bus Ticket to the Highlands.

My following account is of one of my visits to Landmannalaugar: 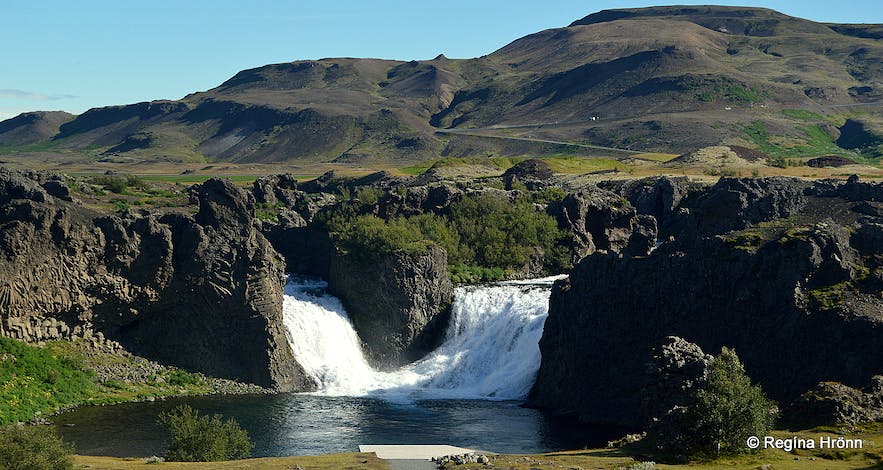 Our first stop was at Árborg in Árnes, where there is a gas station and café up-country in South-Iceland, where we bought food to eat in Landmannalaugar. Then we drove further on into Þjórsárdalur valley and stopped by the beautiful waterfall Hjálparfoss, Help's Falls.

Hjálparfoss runs in the river Fossá right before it merges into Þjórsá river, Iceland's longest river. Further up this river, you will find Iceland's second highest waterfall, Háifoss, on which I have written another travel-blog. 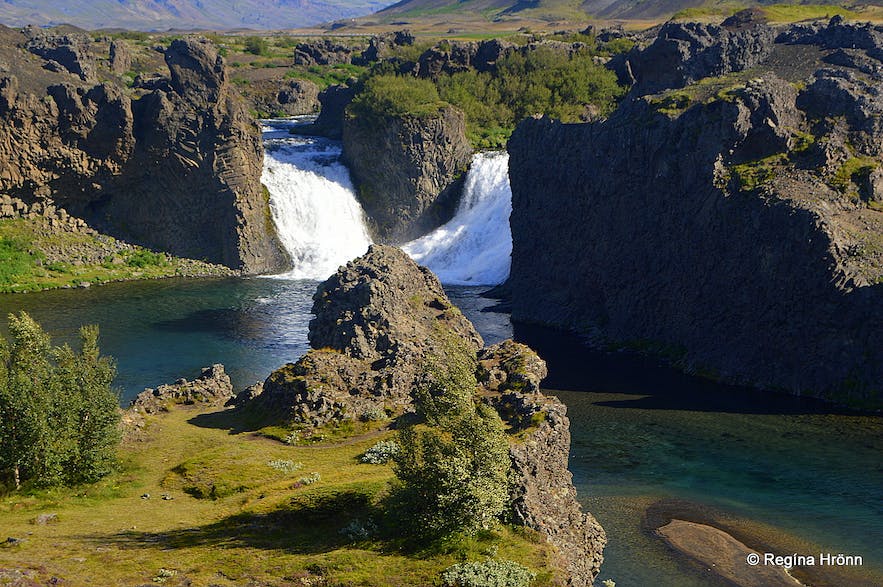 Hjálparfoss is set in beautiful basal rock formations - one of which looks like a bear's head. Can you spot it in the left corner of the photo? The waterfall is split in two with a serene pond in front. The name of Hjálparfoss waterfall is the name given to this area, as travellers crossing the barren Sprengisandur highlands could graze their horses there after a long journey.

Here, by this beautiful waterfall, we stopped for some 20 minutes.

Now we were entering the highlands. We drove by several power plants of which there are many in this area, but they harvest the energy from the rivers Þjórsá and Tungnaá. 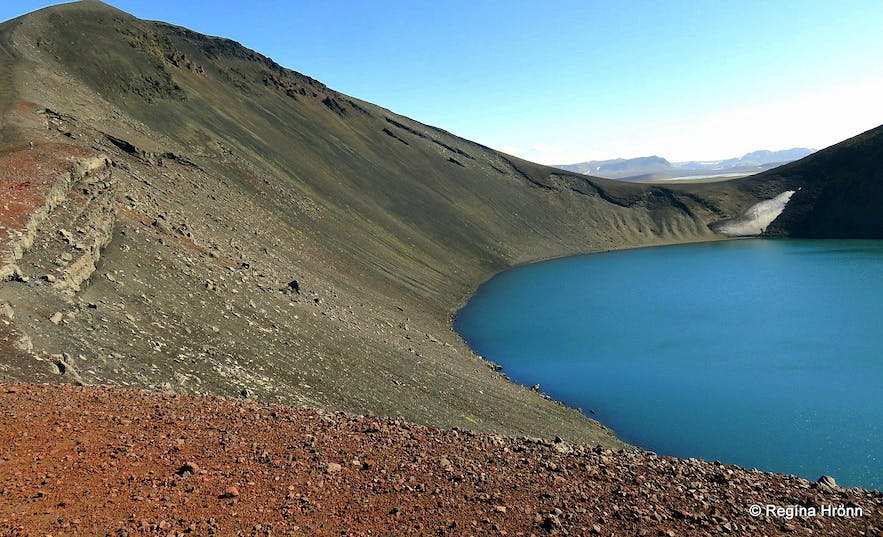 We stopped twice on the way, one "technical stop" (toilet stop) at Hrauneyjar Highland Centre (remember to bring coins as we have to pay for the toilet facilities in the highlands) - and the other stop was at Hnausapollur, an extinct crater, which is now lake filled.

The sun was right in my eyes, so it was unfortunately impossible to get a good photo of Hnausapollar. A good photo can be taken from above, but we didn't stop for long enough to walk up the hill. So this photo has to do for now.

When we had passed the final power plant the road turned into a bad, bumpy road. After driving for a while on this bumpy road we finally entered the breathtaking area of Landmannalaugar. 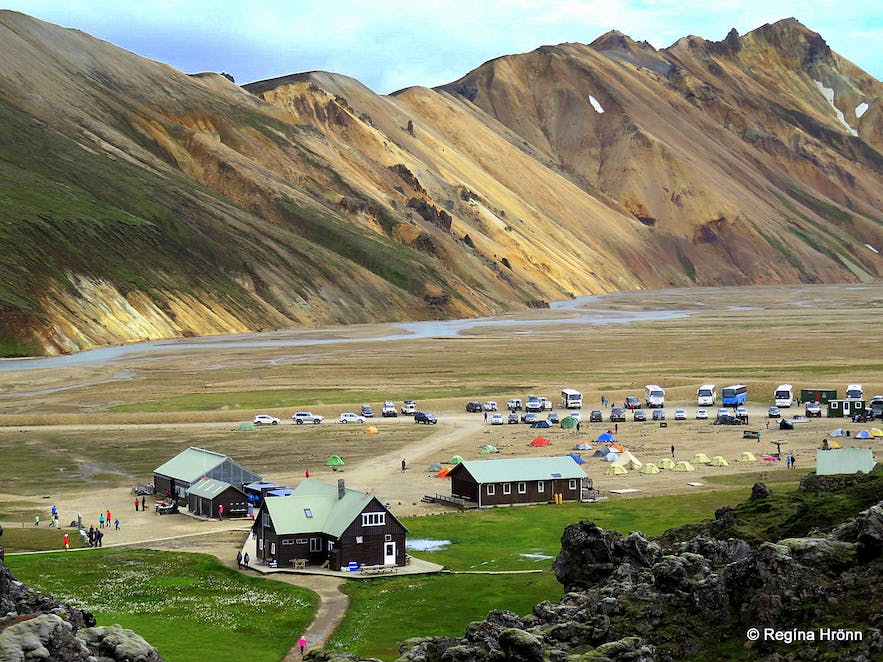 Landmannalaugar is understandably a popular area, which can be visited in the summertime i.e. late June - September. In the winter months, you can visit Landmannalaugar by joining guided super jeep tours and sightseeing flights.

The bus crossed a river in order to reach the main area. You can also leave your car by the river and cross the river via a footbridge. 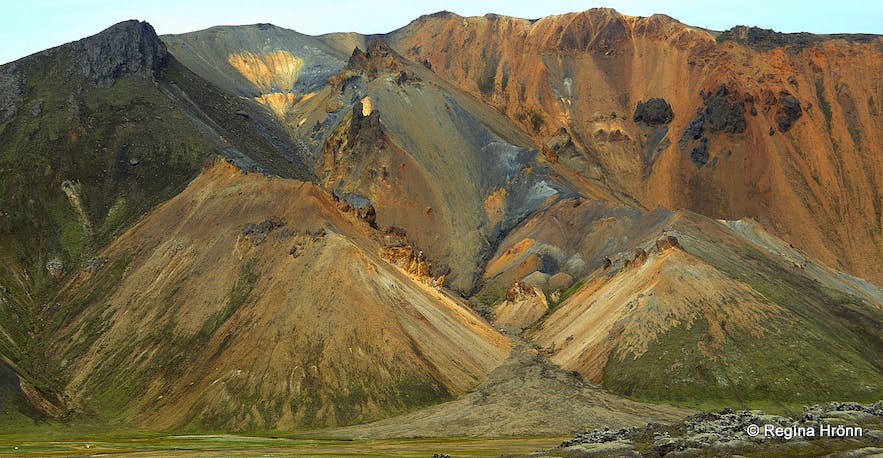 The main attractions in Landmannalaugar are the colourful rhyolite mountains. They have for sure got the WOW factor and one feels like having stepped into a magical world. And of course, the hot pool is also a major attraction.

On the campsite in Landmannalaugar, you will notice that the tents are fastened with rocks. The ground is so rocky that tent pegs cannot be used here. You will see tents here with rocks all around them for keeping them in place. 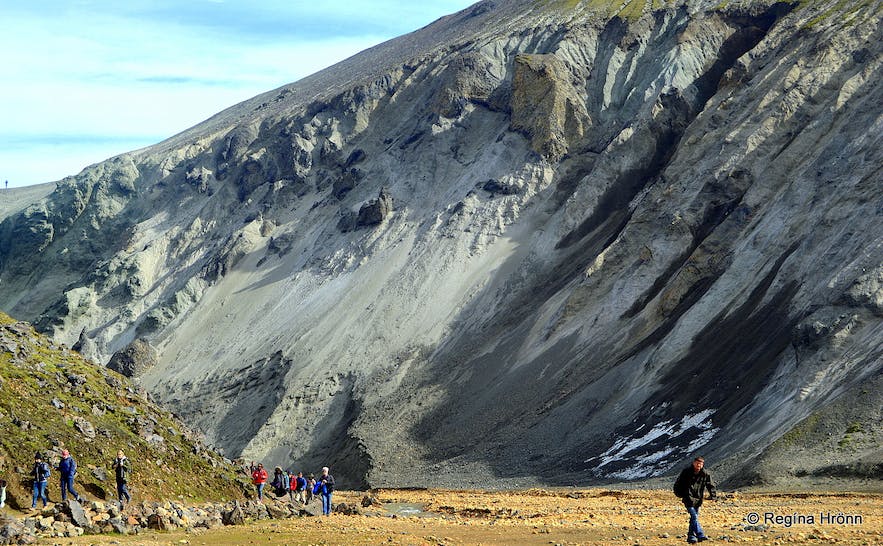 There are many hiking routes in Landmannalaugar. We were guided through Grænagil canyon, the canyon between Mt. Blàhnjùkur and Laugahraun lava field. It is a 1.5- 2-hour hike through a fantastic terrain.

The path on the first part of this hike is a bit narrow, so it was difficult to meet people coming from the other direction. Hiking boots are needed here as we walked through a rugged lava field. 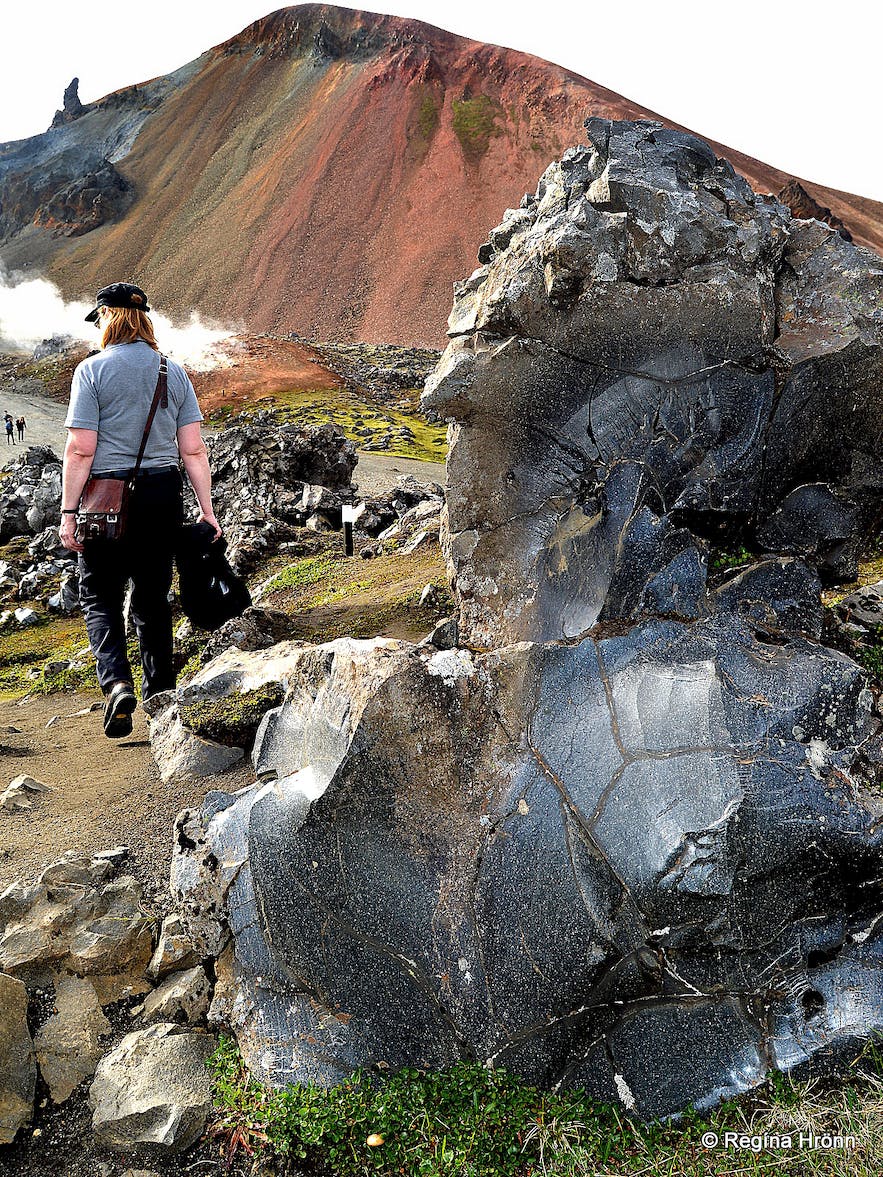 I was taking photos left and right on the whole hike, apart from when we were hiking through the lava field - there one has to pay attention as one false step could lead to injury. 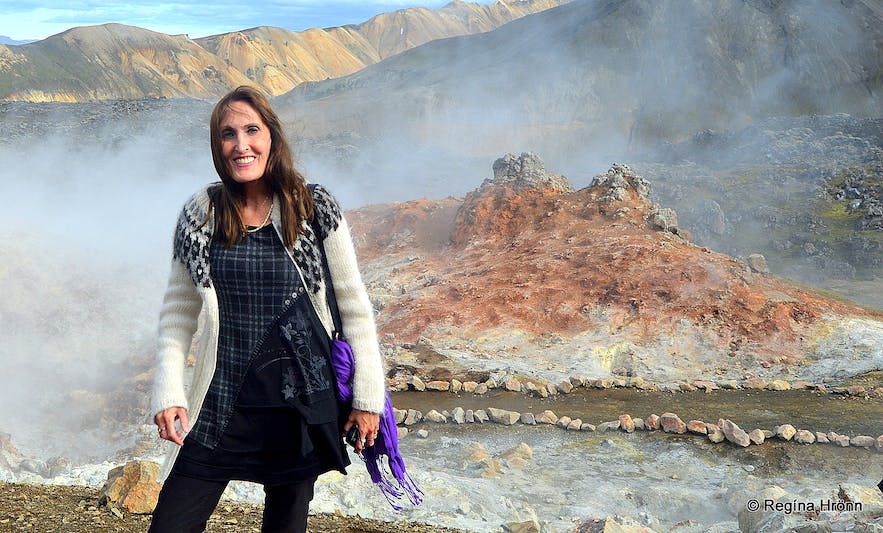 Just before we reached Brennisteinsalda mountain we passed a big mud pool on the hill, with the obnoxious smell of sulphur filling the air. I once got sulphur poisoning from the fumes of the mud pools in Námaskarð up north by Mývatn, and since then I have been very sensitive to this smell, as you can maybe see in my photo above ;) 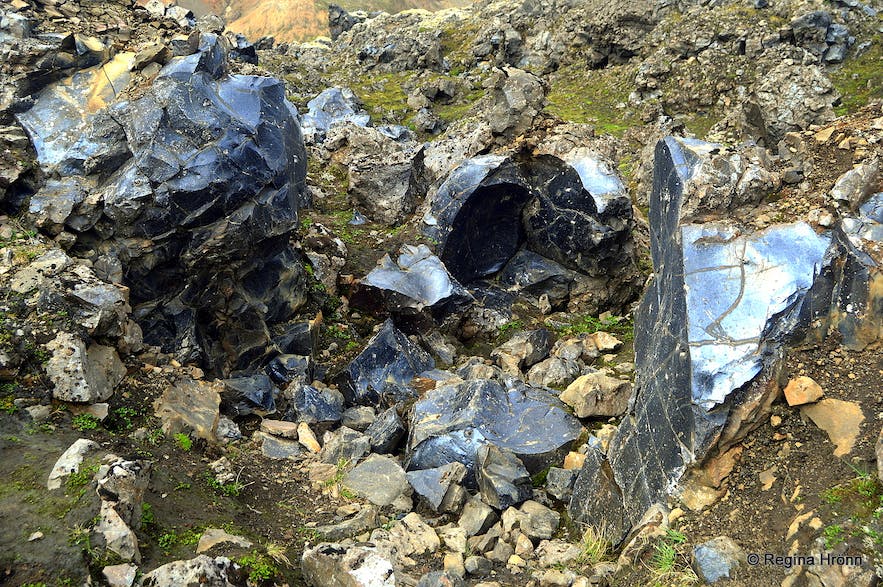 The trail here is easy. 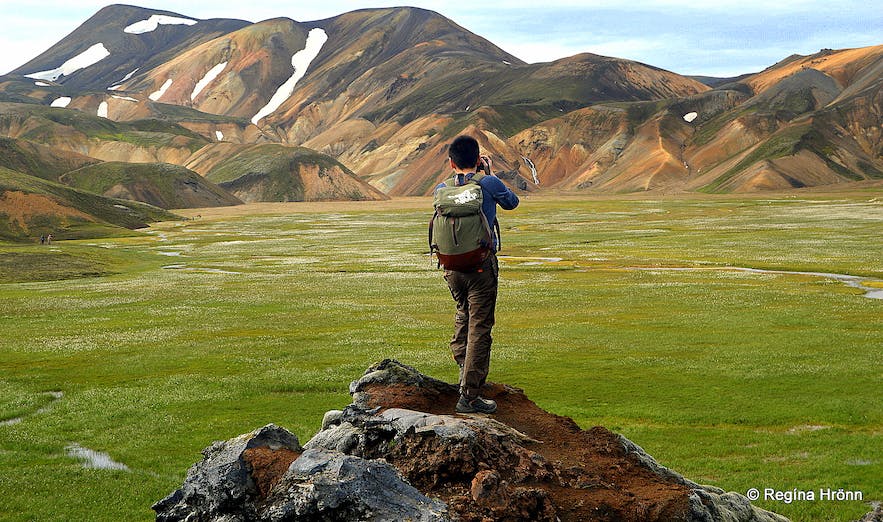 The beauty of this hike is just breathtaking, my photos don't even begin to show you how beautiful this landscape is. Everywhere you look you will see extraordinary colour combinations.

When I visit Landmannalaugar I just cannot stop taking photos - and as you can see from my photos, then so does everybody who visits this beautiful place :) 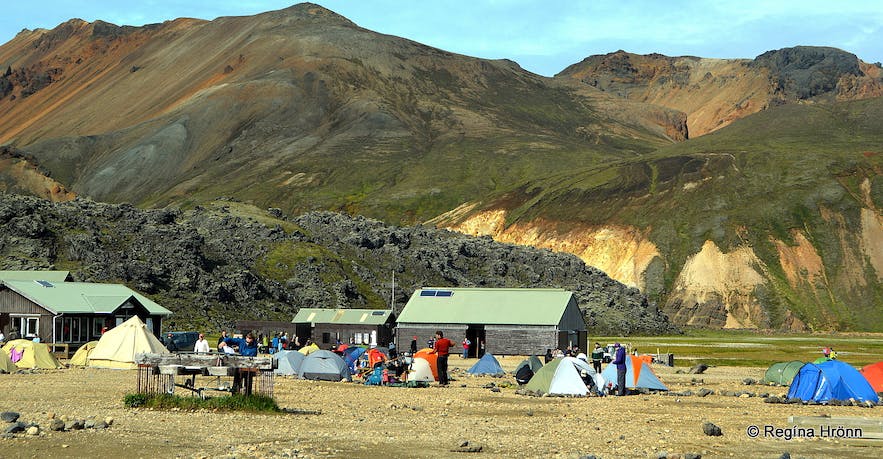 We finished the hike by climbing down a very rocky path to get back to the main area of Landmannalaugar. As I came to the end of this rocky path I met 2 men measuring for a new, less strenuous path. It is expected that some 200,000 people will visit Landmannalaugar annually, so a better path is needed. 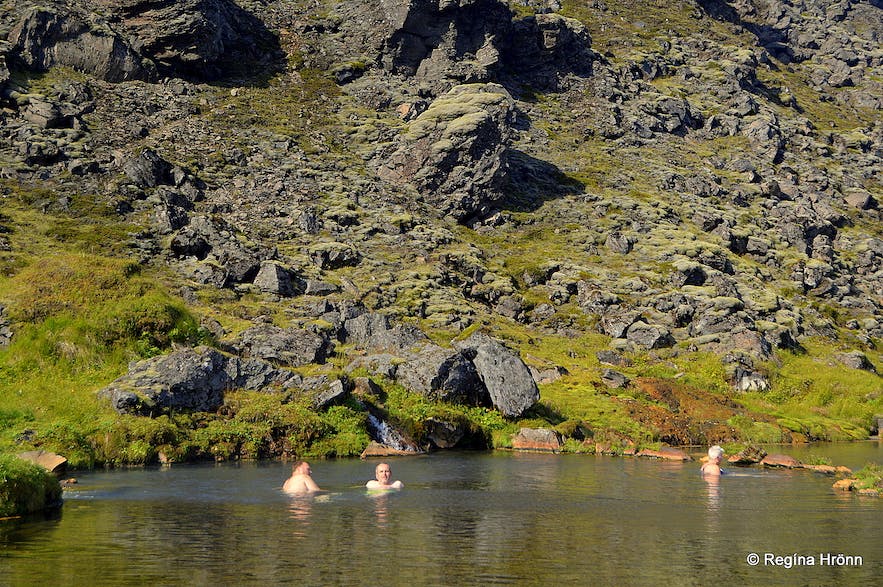 You will find one of the natural geothermal hot pools at Landmannalaugar. Do bring a swimsuit and a towel and take a shower before entering this pool for sanitary reasons. The pool is very popular, and hikers soak in it after hiking on the busy Laugavegur hike.

Just a word of warning - I never dip in as Swimmers Itch (SI) has been identified in the pool. So you bathe at your own risk. This is nature and this SI is derived from some duck species nesting in this area. This only happens from time to time and most people don't get affected by it. 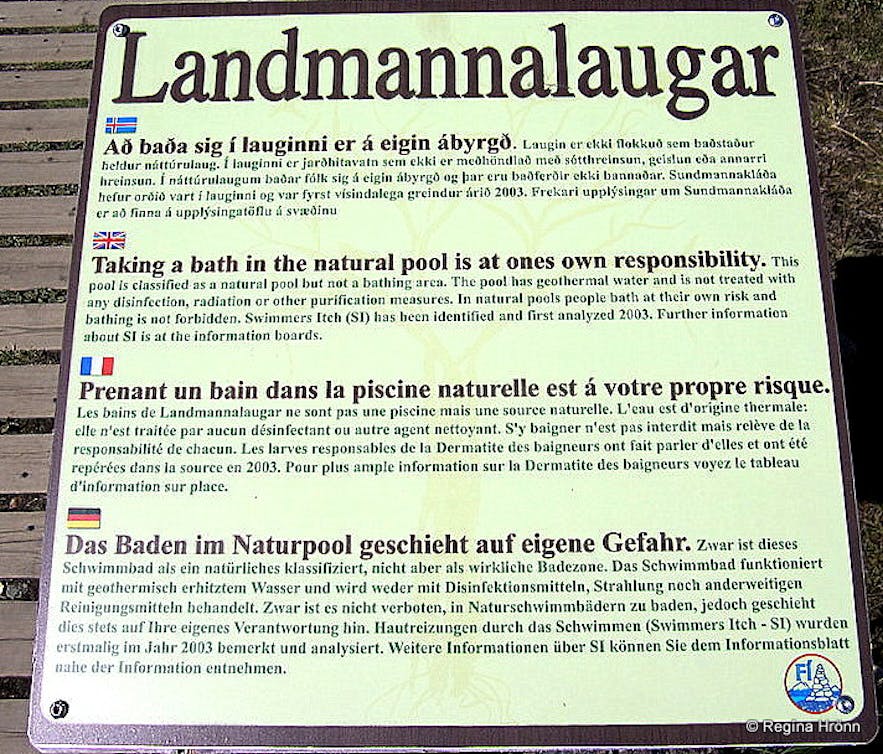 After having stopped for 3 hours at Landmannalaugar it was time to head back. On the way back we made 2 stops.

We took another better road back, which was nice as the alternative was quite bumpy. We drove through beautiful highland nature, with mountains and quite barren landscape, where I spotted a few sheep grazing.

We had to cross 2 small rivers on this road and a 4x4 is needed here. 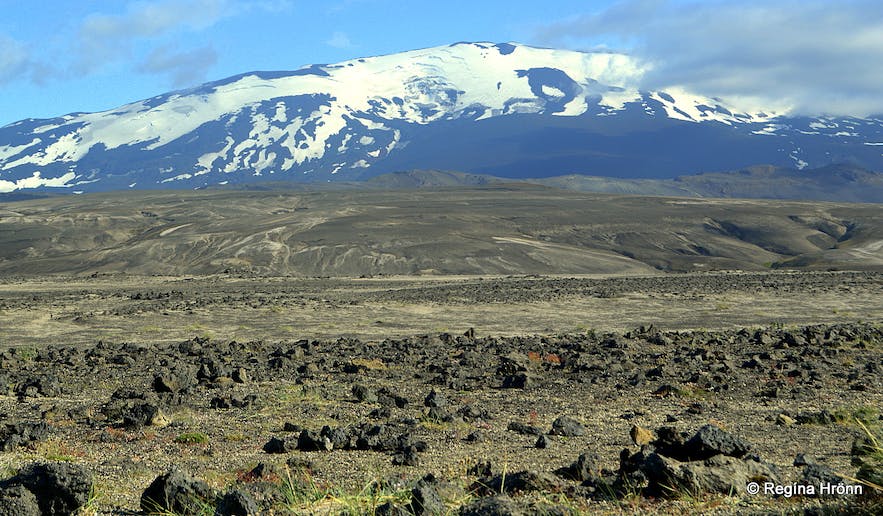 Our first stop on the way back was a photo-stop by Mt. Hekla volcano, as this road passes Hekla, which is one of Iceland's most active volcanoes. Hekla, which has been referred to as the gateway to Hell, has been due to erupt for some years now.

Our final stop was made at Landvegamót gas-station and café, where we stopped for 15 minutes and had a coffee break and were able to use the toilets. Then we headed straight for Reykjavík and the passengers were dropped off at their hotels after a long, but a very fulfilling day.

Visiting Landmannalaugar is spectacular, try not to miss it; here one gets to see a beautiful waterfall on the way to the highlands, big lava fields, glistening volcanic glass, amazing rhyolite mountains and to bathe in a hot spring (if you wish).

Landmannalaugar is for sure the hidden pearl of the central highlands. 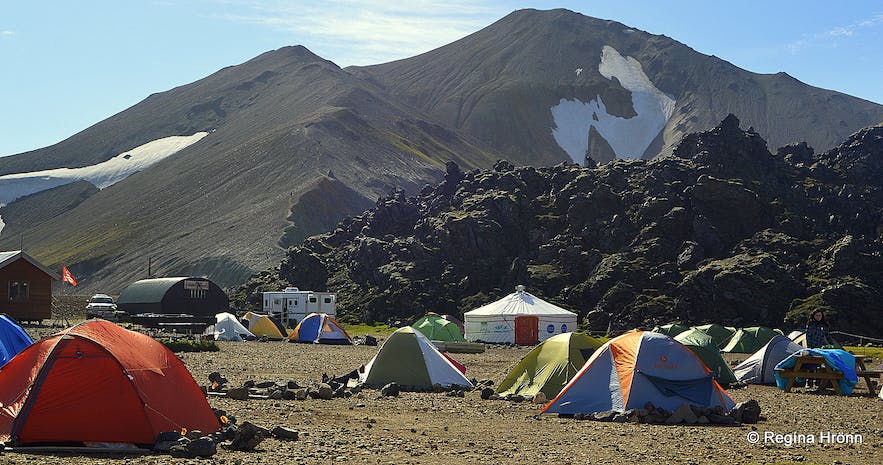 Unfortunately, this tour is no longer operating, but you can check out the many other various guided tours to Landmannalaugar.

Have a lovely time visiting Landmannalaugar, the Pearl of the Central Highlands of Iceland :)