Nonnahús museum is my favourite museum in Akureyri and a hidden gem in the capital city of North Iceland.

I have such fond memories of visiting this museum when I was a child, and I visit Nonnahús museum every time I travel up north to Akureyri :) 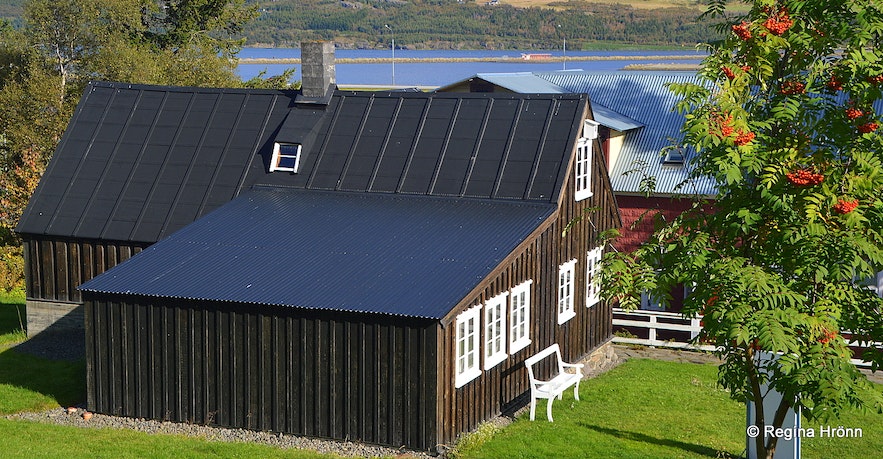 Nonnahús as seen from above

Nonnahús was the childhood home of Jón Sveinsson (1857-1944), who was called Nonni, but Icelandic men with the name Jón are often called Nonni or Jonni.

Nonnahús is one of the oldest houses in Akureyri, built in 1850. It opened as a museum in 1957 on Nonni's 100th anniversary.

Nonni was born on the 16th of November 1857 in Möðruvellir in Hörgárdálur valley, not far from Akureyri, and moved to Akureyri with his family when he was a little under 8 years old. 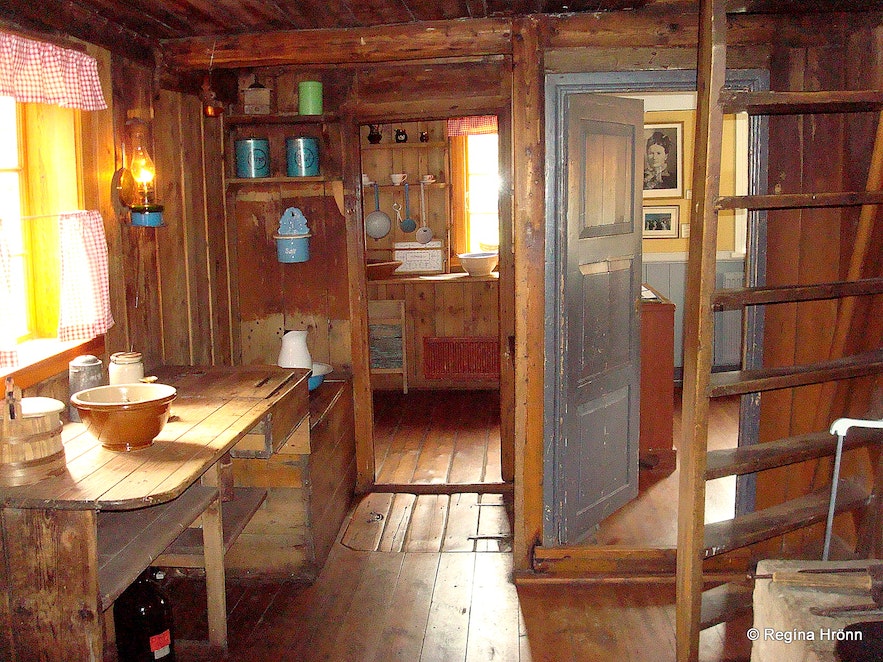 Nonni's father died when Nonni was only 11 years old, and his mother couldn't raise her 5 children alone.

Then Nonni got the opportunity when he was 12 years old to go to a Catholic college in France in 1870 when a French nobleman offered to pay for the studies of 2 Icelandic boys. 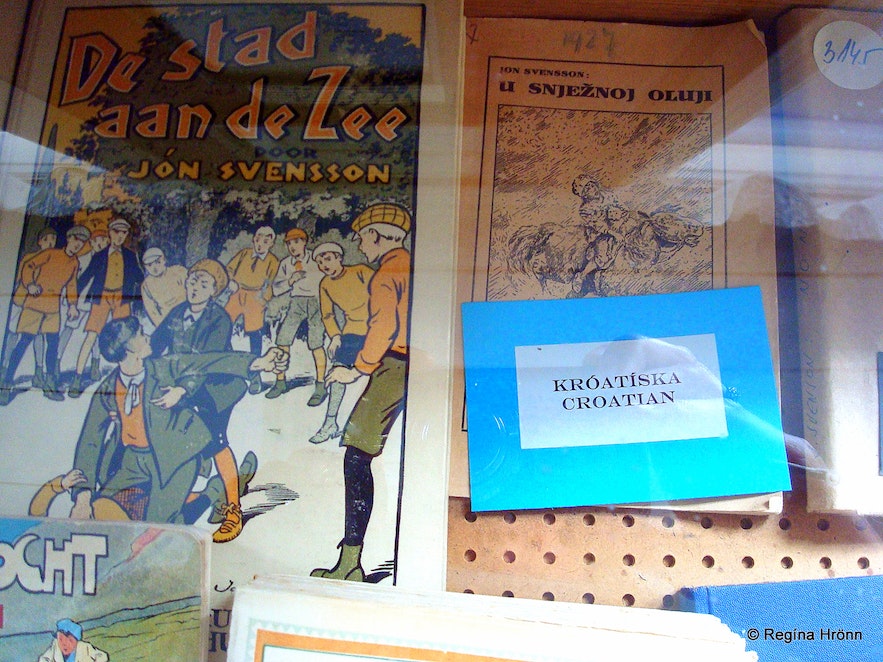 Nonni's books have been translated into many languages

Nonni became a well-known writer of children's books and wrote 12 books about his life. I read all of his books about his childhood when I was a child and most Icelanders of the older generation have read his books.

Nonni wrote his books in German from 1913-1944 and his books have been translated into approximately 40 languages. At the Nonnahús museum, you will see his books in different languages on display. It is so awesome that different nations in the world love his books as much as we Icelanders do :)

Nonni travelled all over the world and wrote Nonni in America and Nonni in Japan, which I have also read. 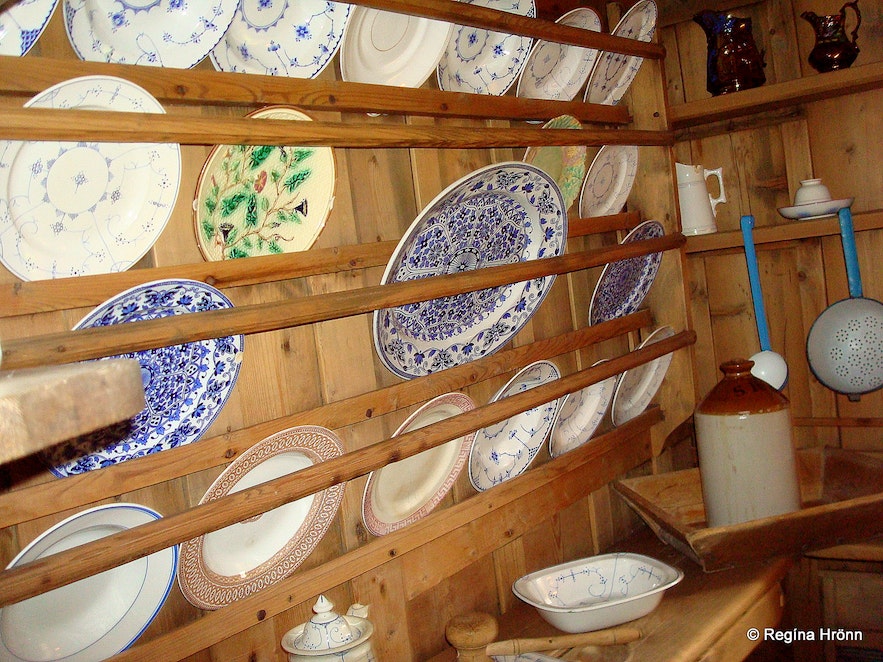 His brother, Ármann, called Manni, was sent to join Nonni in 1873. Unfortunately, Manni died of consumption there only 24 years old.

Always an Icelander at heart Nonni only managed to return to Iceland on 2 occasions until he died in Cologne in 1944. His first visit was in 1894 when he traversed Iceland on horseback. He wrote a book about his Iceland visit; A Journey Across  Iceland, which is a lovely read. 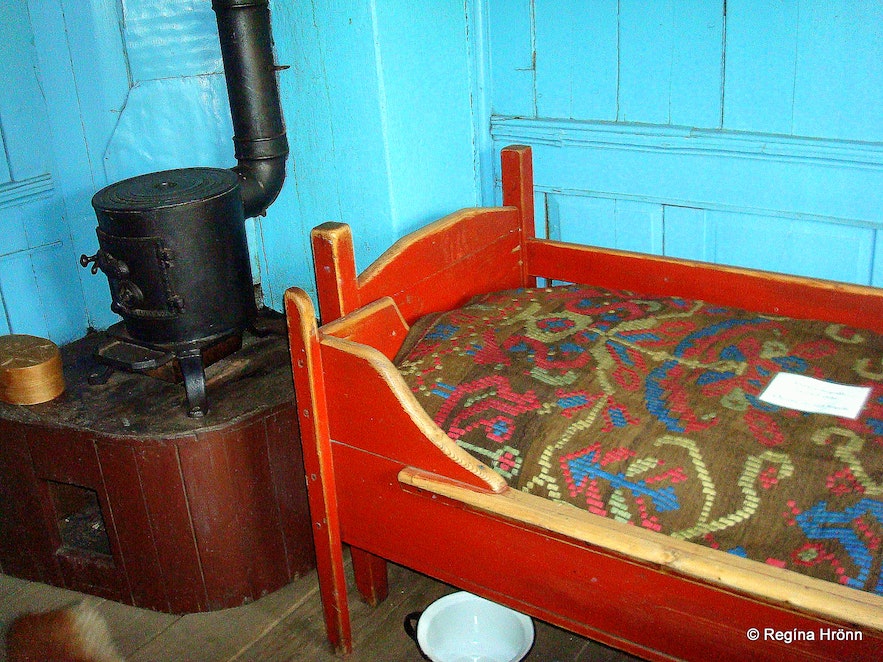 Nonni was then invited to Iceland in 1930 on the occasion of the 1000th anniversary of the Commonwealth held at Þingvellir, but the Vikings established a parliament in 930 at Þingvellir.

During his Iceland visit in 1930, Nonni was made an Honorary Citizen of Akureyri, a well-deserved title.

The museum is so lovely as it is like you have come to visit Nonni in his home as the rooms are preserved as they were when he lived there.

Nonnahús, old toys in the garden

In the garden by Nonnahús, you will see old Icelandic toys, which consisted of sheep bones and horns and sticks and stones. Nonni and his brother Manni would have played with such toys. Times have changed, eh?

The Zontaclub ran the Nonnahús museum for 50 years - or from 1957-2007. Anna S. Snorradóttir was one of the founders of the first Zontaclub. She wanted to make a museum at Nonnahús, which had become very run down. 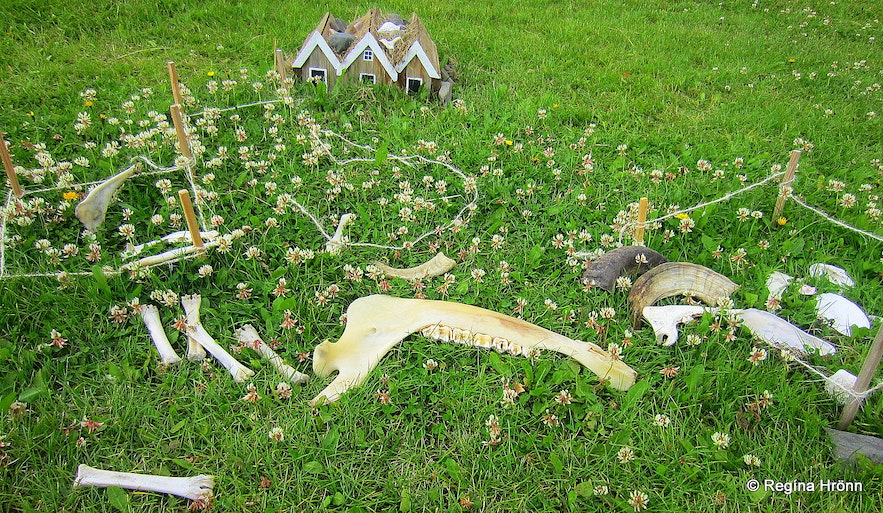 Old children's toys in the garden by Nonnahús house

The owners of the house donated their house to the Zontaclub, how generous is that :)

The Statue of Nonni 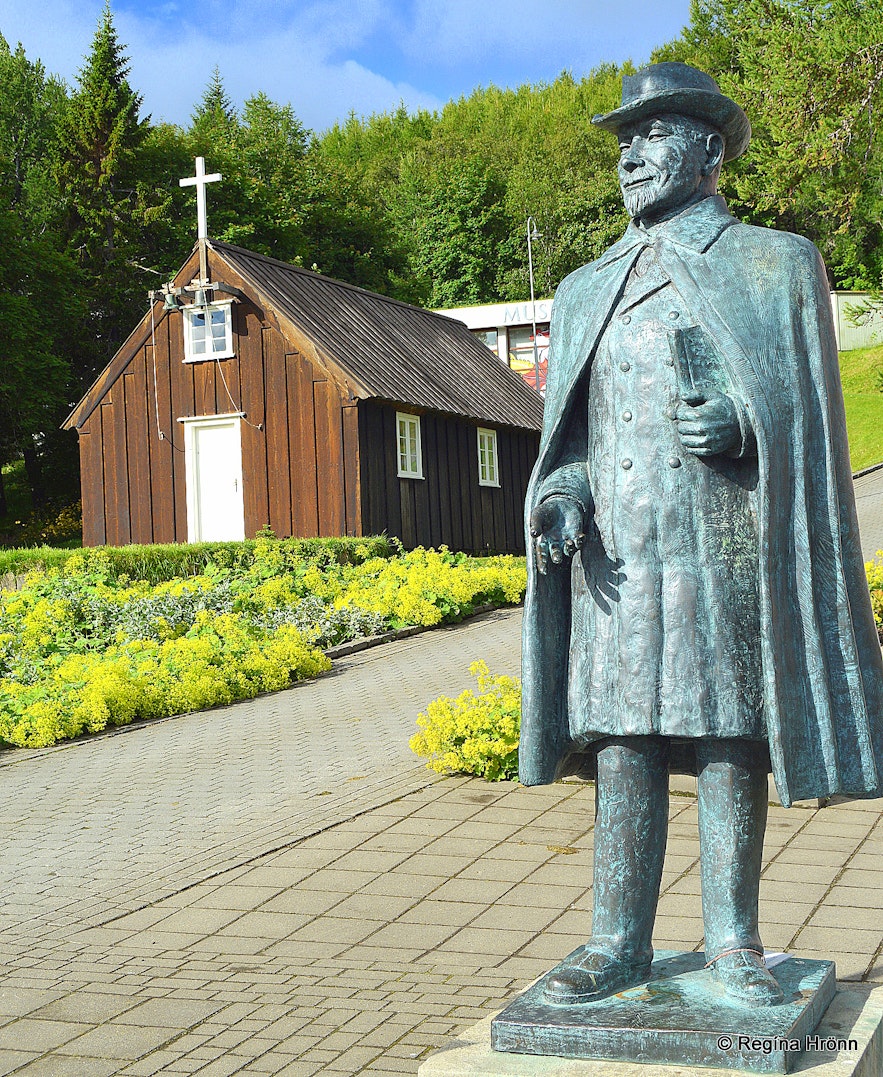 Minjakirkjan in Akureyri and the Nonni Statue

There is a big statue of Nonni, 2.5 meters high, in front of the Nonnahús museum. It was made by one of our female sculptors, Nína Sæmundsson, in 1957.

The statue was located for a while in the old Borgarbókasafn, City Library in Reykjavík. Then it just disappeared. 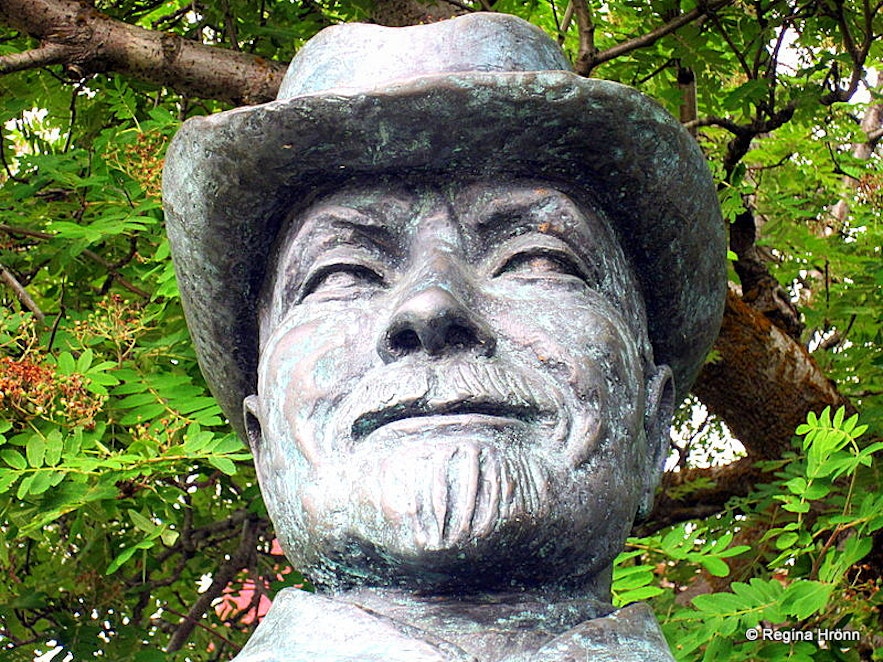 The Nonni statue up close

Women from the Zontaclub of Akureyri heard of the statue and started looking for it. One of Zontaclub's goals is to preserve the memory of Nonni, the Honorary Citizen of Akureyri.

After the statue was moved from the City Library in ca 1982 nobody knew where it was. The women in the Zontaclub tried in vain to find the statue. 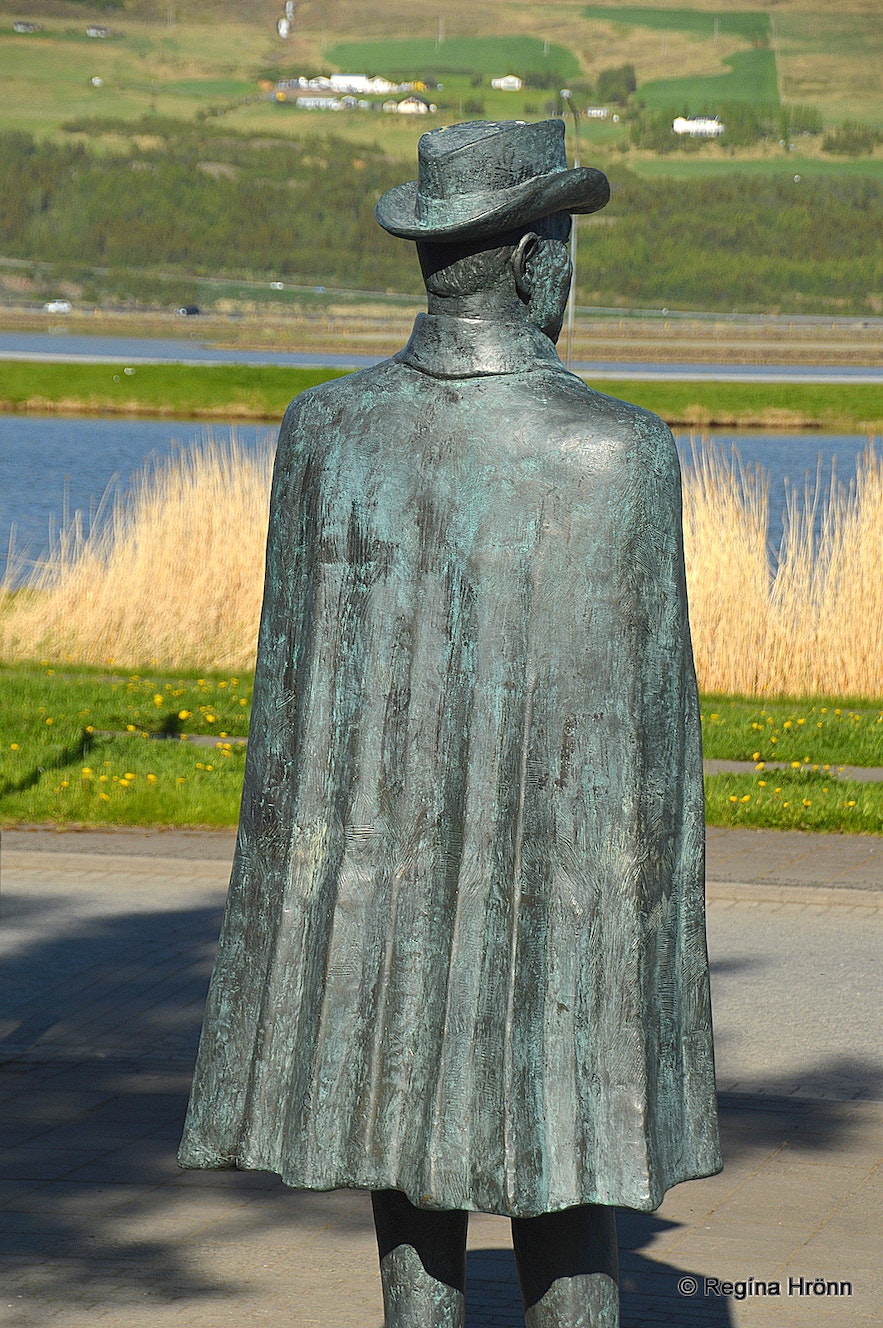 Nonni looking out to sea

They decided on asking the nation for help. From 1970-1980 a lot of newspaper articles were published and finally after so many years, the statue was found hidden away in a hay loft.

The statue was found in the hay loft of Korpúlsstaðir just 15 minutes away from where I used to live in Reykjavík. It was found in a box with the marking "head up" - and it was totally intact. 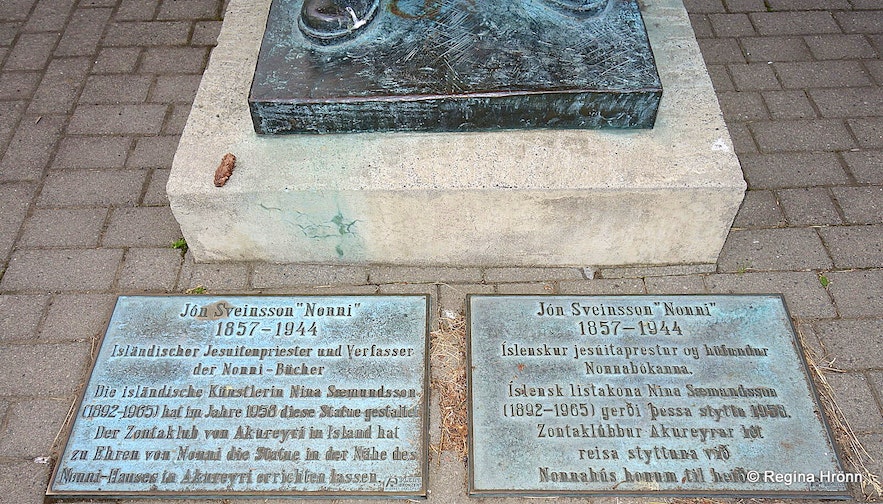 The information plaques by the Nonni statue

The Zontagroup received the Nonni statue as a present and decided on casting it in bronze.

The statue was sent to Germany and inaugurated in 1994 where it got a place in front of the Nonnahús museum. 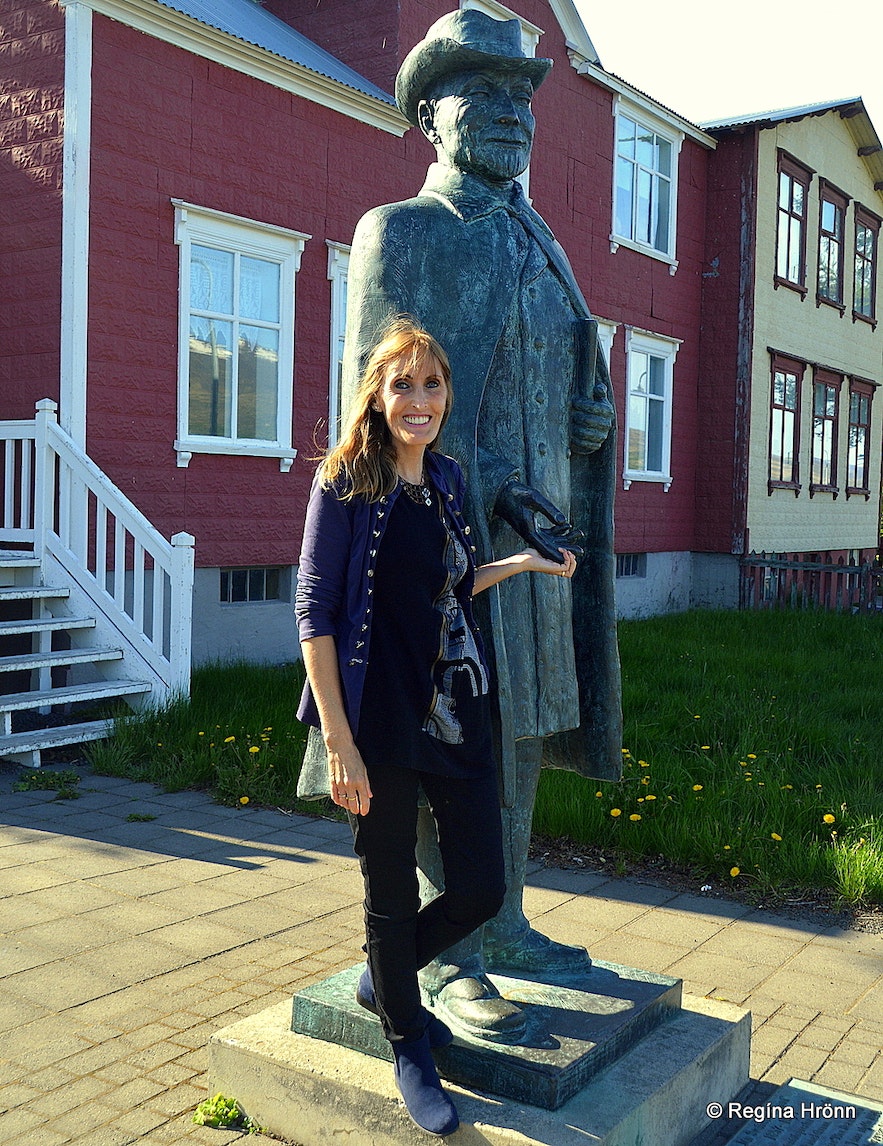 On one of my annual visits to Nonni :)

I just love this statue and I greet Nonni and have my picture taken with it every time I visit Akureyri, so by now I have quite a collection of Nonni photos; the one I have added of me and Nonni is from 2018 :) 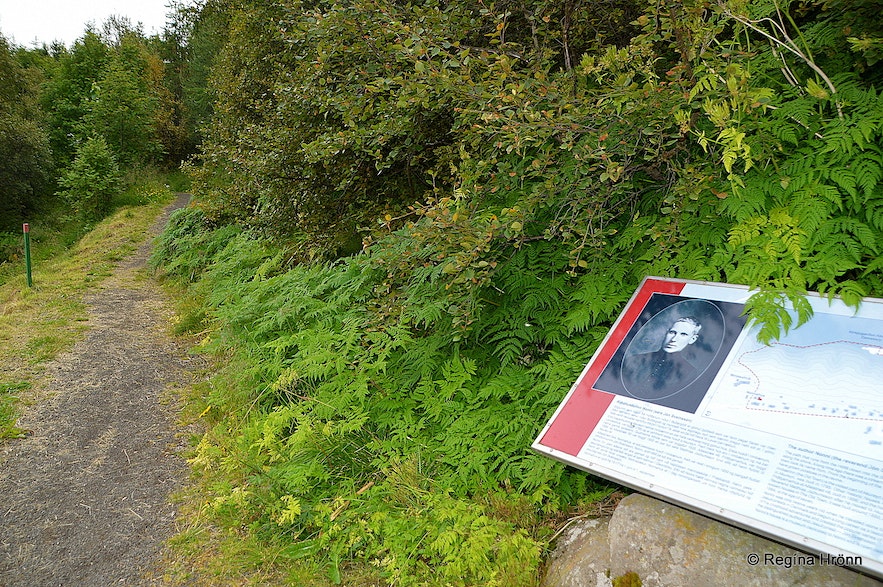 Nonnasteinn rock is named after Jón Sveinsson, or Nonni as he was called. It is a big rock on Höfði above Nonnahús museum.

The information sign in my photo above shows the beginning of the path to Nonnasteinn rock from below.

When Nonni was 11 years old, he was invited by a French count to go to France to study at a Catholic college. Nonni wanted to study and see the world, but on the other hand, he didn't want to part with his mother and siblings.

In his book Nonni, he describes his emotions when he had to make this big decision. 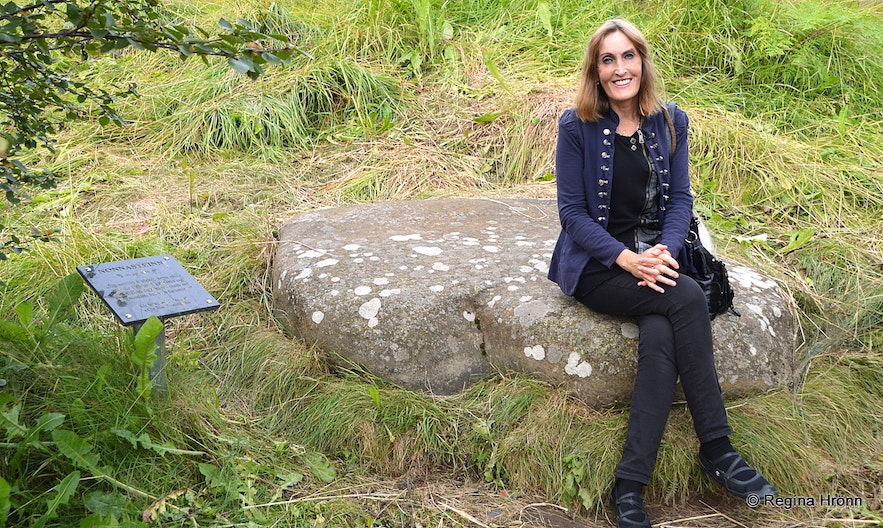 He stood on the slope above his home and while looking out at the sea he saw a sailboat.

"I could not stop thinking about this little sailboat. I sat on a rock, which stood out from the fragrant grass and let my feelings and thoughts loose. In my troubles and agony of my soul, I sighed and gasped out: "Oh, dear God! What should I do?"

Nonni then went to Germany and later on, he became a Jesuit priest and became known as Pater Jón Sveinsson. 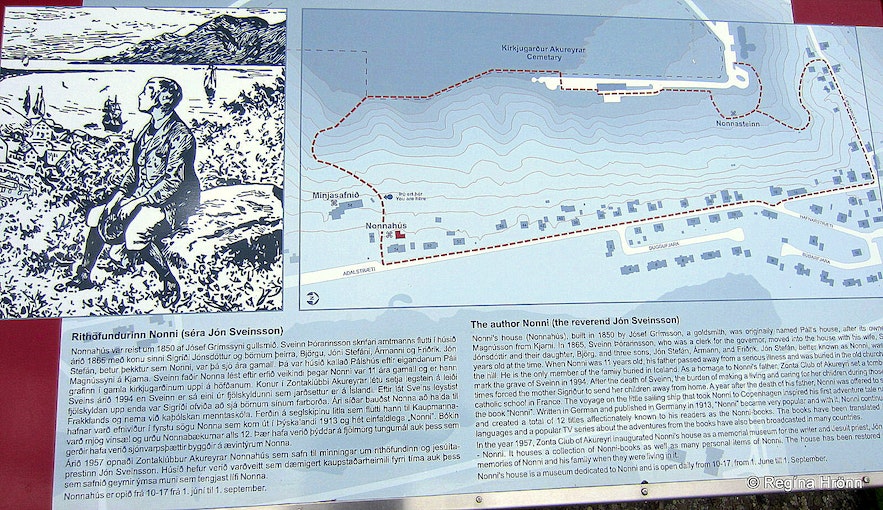 You can see a lovely drawing of Nonni sitting on this rock looking at the sea. The information sign above is to be found next to the cemetery, where the path to Nonnisteinn rock from above starts.

Nonni was born in 1857 at Möðruvellir in Hörgárdalur valley, between the towns Dalvík and Akureyri in Eyjafjörður fjord.

Möðruvellir is a historical place. There used to be an Augustinian monastery at Möðruvellir from 1296 until the Reformation in 1550.

One of the most noteworthy libraries in Iceland was once located at Möðruvellir. And some of the greatest chieftains in the North of Iceland lived here at Möðruvellir in the Icelandic Saga period. 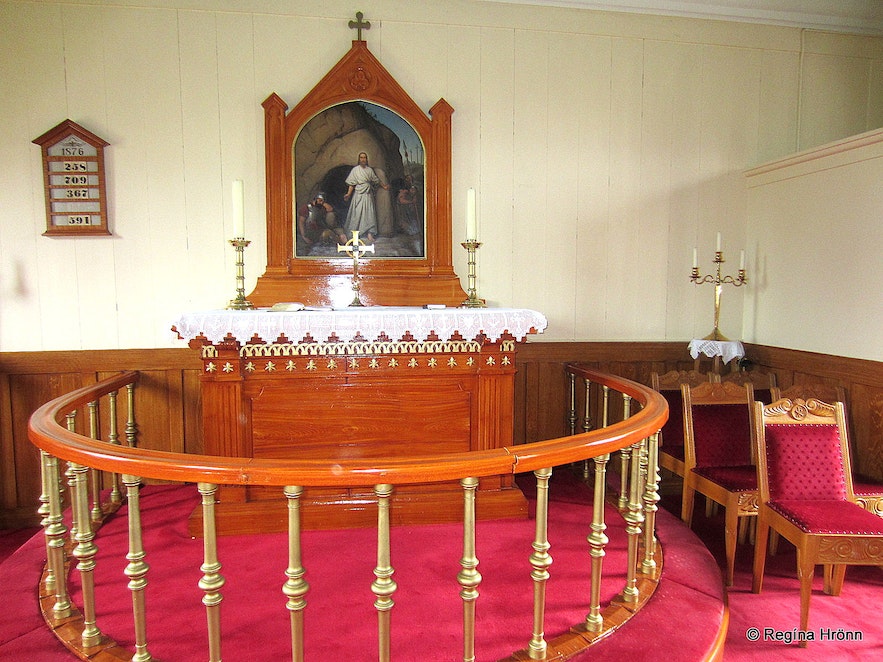 The church at Möðruvellir was once the largest church in Iceland. I love the blue ceiling of Möðruvallakirkja church. It has got some 2,000 stars made of plaster.

Another church with the same name, Möðruvallakirkja, is in Eyjafjörður, see my travel-blog Eyjafjörður Fjord in North-Iceland - Historical Churches

Nonni's family moved from Möðruvellir to Akureyri town in 1865 when Nonni was a little under 8 years old. Nonni's father died only 4 years later of hydatid disease. 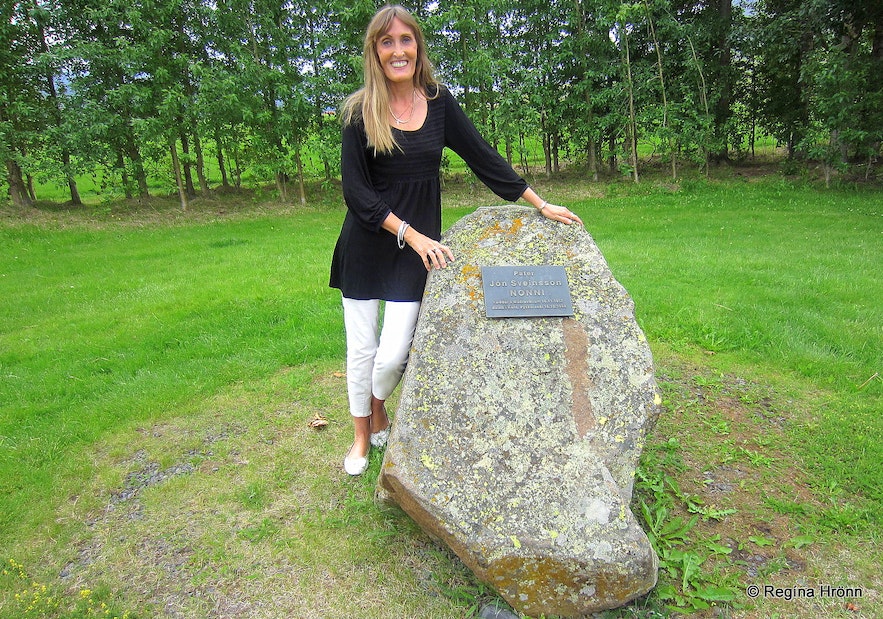 By the Nonni memorial grove at Möðruvellir

There is a memorial grove at Möðruvellir in honour of Nonni. In it, you will find a big rock with Nonni's name on it and information in 4 languages about Nonni.

Nonni's ideal was to: "Give joy to others and strengthen their faith in all which is beautiful and good in this world" - it doesn't get better than that. You can listen to a report on Nonni in German on Radio Vatican. 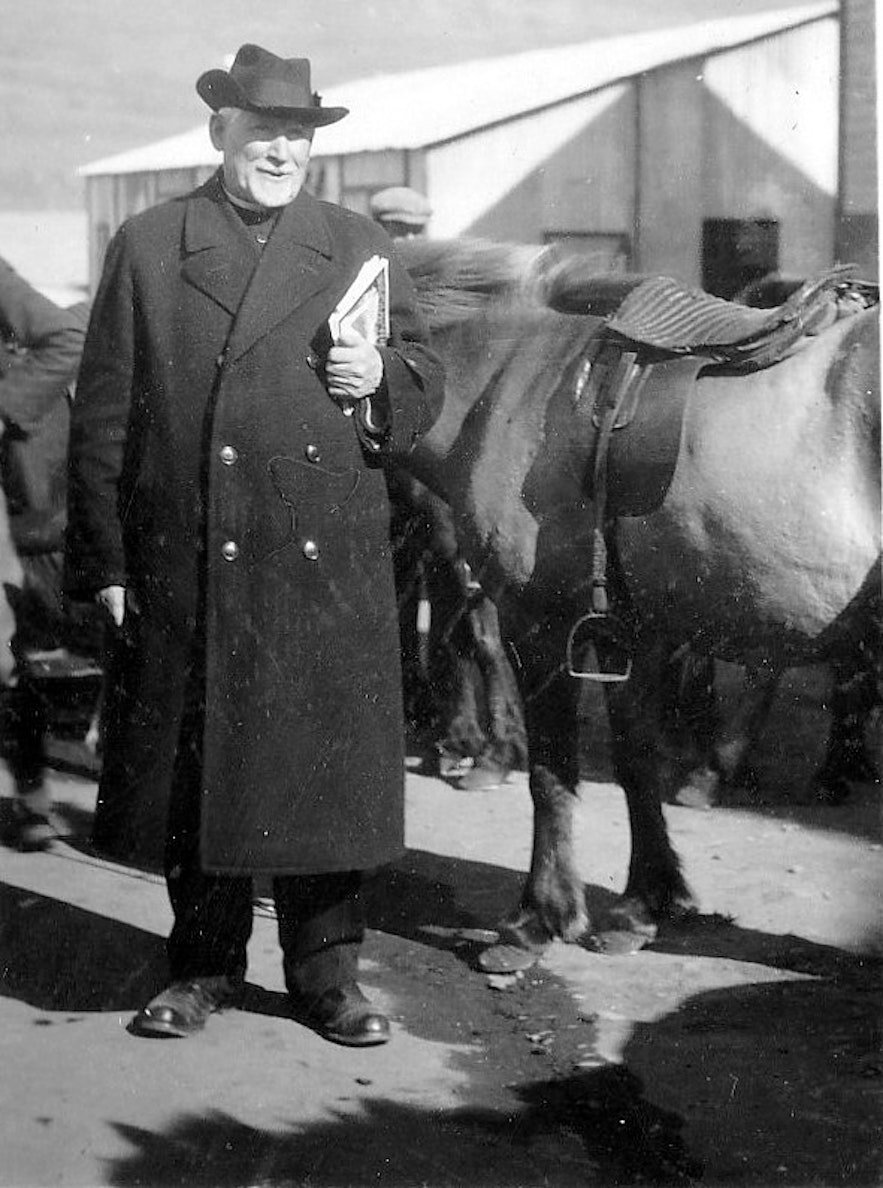 A photo of Nonni in Akureyri, taken in 1930 - photographer Eðvarð Sigurgeirsson

The above photo of Nonni I found in my great-aunt Regína's photo collection. It was taken in 1930 in Akureyri by the photographer Eðvarð Sigurgeirsson, who was the boyfriend of my great-aunt at that time.

A German lady, Friederika Priemer, takes care of Nonni's grave in Cologne. She also has a website the Nonni Fanclub in Germany, dedicated to Nonni and his work. I correspond with her from time to time and hold her in the highest respect for keeping the memory of our beloved Nonni alive. 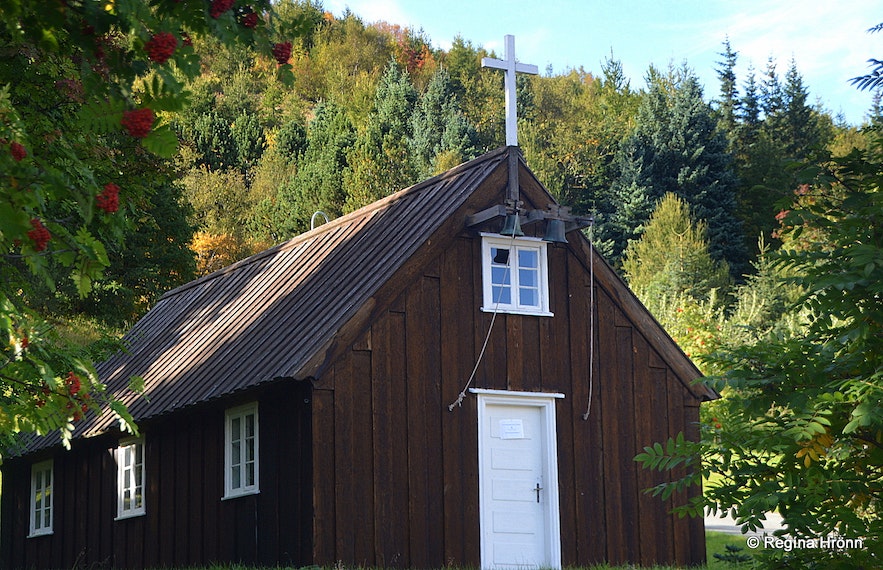 Friederika has been so kind as to send me 3 Nonni books, which have been translated into English from German. The latest one, Nonni in Japan, she translated and published in 2022. In Japan, Nonni held numerous talks about his motherland - it really is a fascinating read.

Nonni went around the world at 80 years of age and visited Europe, America, Canada, Japan, and China. His childhood dream had been to visit Japan and he stayed in Japan for a year.

If you ever visit Eyjafjörður and its capital city, Akureyri, then do look for the Nonnahús museum. It is so worth it. It is kind of hidden from view, so one has to really look for it. 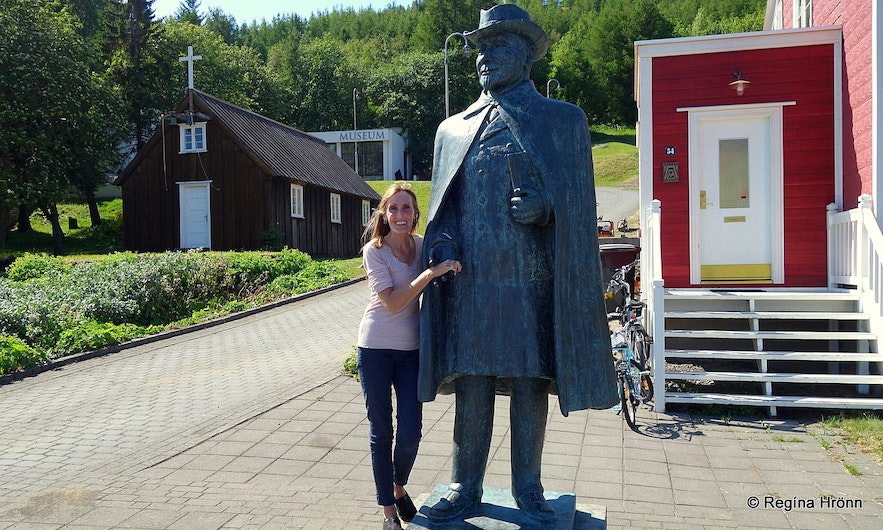 There is a lovely small old church by the museum and you will notice the large statue of Nonni by the street.

To visit North Iceland you can rent a car in Reykjavík and drive up to Akureyri in one day - it is around 388 km.

I have written a couple of other travel-blogs about lovely Akureyri:

Have a lovely time visiting Akureyri and Nonnahús Museum :)