Ólafsvík is a lovely little fishing town on the north side of the Snæfellsnes peninsula with a population of some 1,100 people.  As in every town and village in Iceland, you will find a museum here in Ólafsvík, a folk museum located in an old, preserved storehouse, dating back to 1844.

Joined together the neighbouring villages Hellissandur, Rif, and the town Ólafsvík are called Snæfellsbær municipality.

The landmark of Ólafsvík is the white modern-looking church. 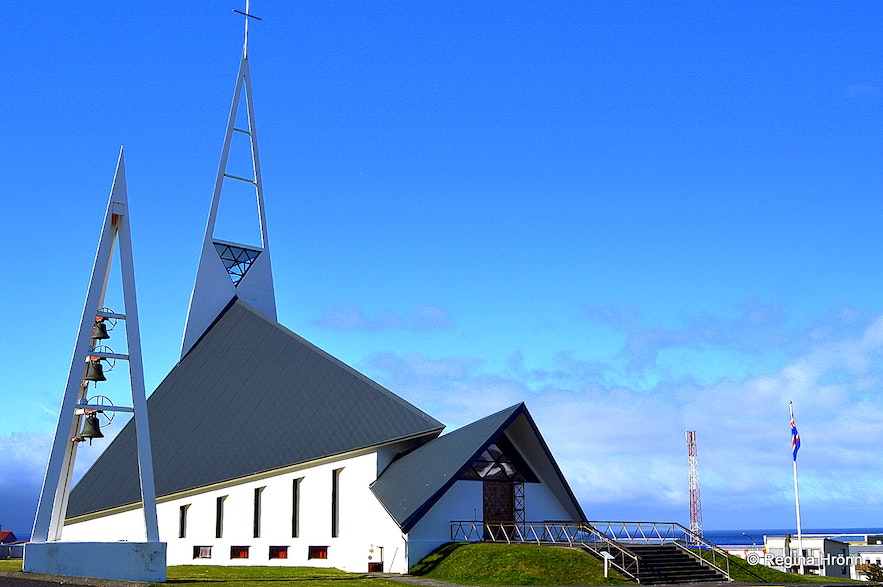 Ólafsvíkurkirkja church was consecrated in 1967, but still a very modern-looking church. It is Iceland's first modern church building and if you drive further on and visit Stykkishólmur town, you will see another big white, modern-looking church. These churches are so prominent that they have become the landmarks of these towns.

If you drive around Iceland you will see very many traditional church buildings dotted all around the country - and in-between there are some unusually shaped churches.

I visit all the churches I see on my travels in my travels and often make a detour to visit a church, as I am very fascinated by these churches. It is not easy to get into them though as most of them are locked due to vandalism and I have to go search for the key. 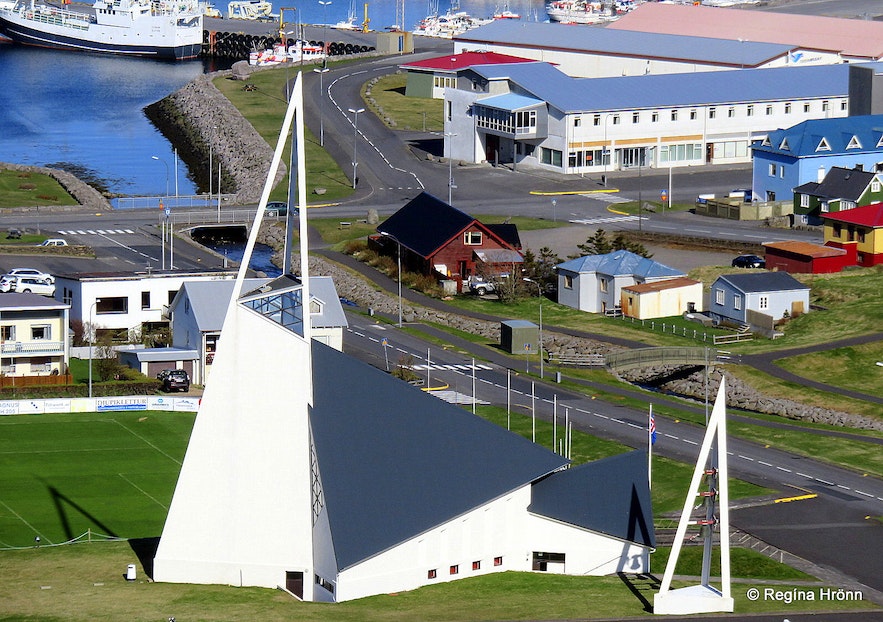 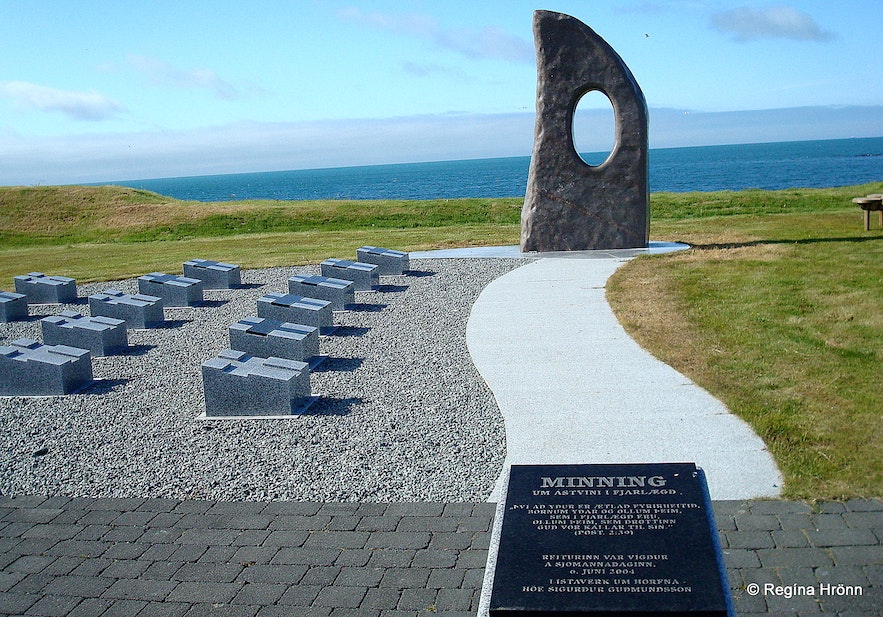 The monument for drowned fishermen in Ólafsvík

Two of my grandfather's sisters are buried in the cemetery in Ólafsvík, but they died of diphtheria only one day apart, the older one only 1-year old and the younger one 4- month's old :( They were the oldest children of my great-grandparents.

Life sure was hard in the old days and it breaks my heart when I go visit their small grave, which has only got 2 first names written on them, Imba and Helga, and no surname (which in Icelandic would be the name of their father Ásmundur).

When small children died they were often buried with an adult, which was not the case with my two great-aunts, who got their own little grave together. 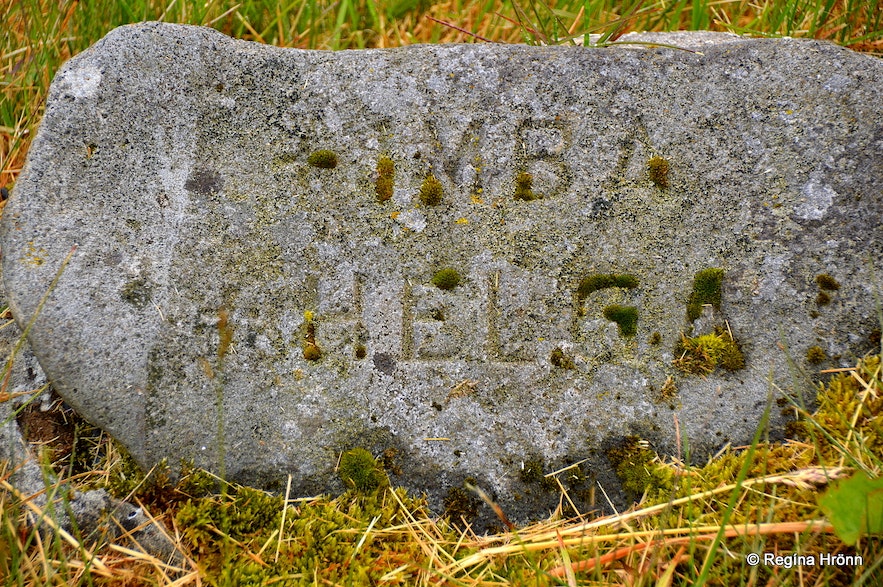 The grave of my two little great-aunts in Ólafsvík

They lived at Fróðá farm close by but later moved to Grund and Suður-Bár farms in Grundarfjörður, where Ásmundur, my great-grandfather, lost his life at sea on Grundarfjörður fjord. 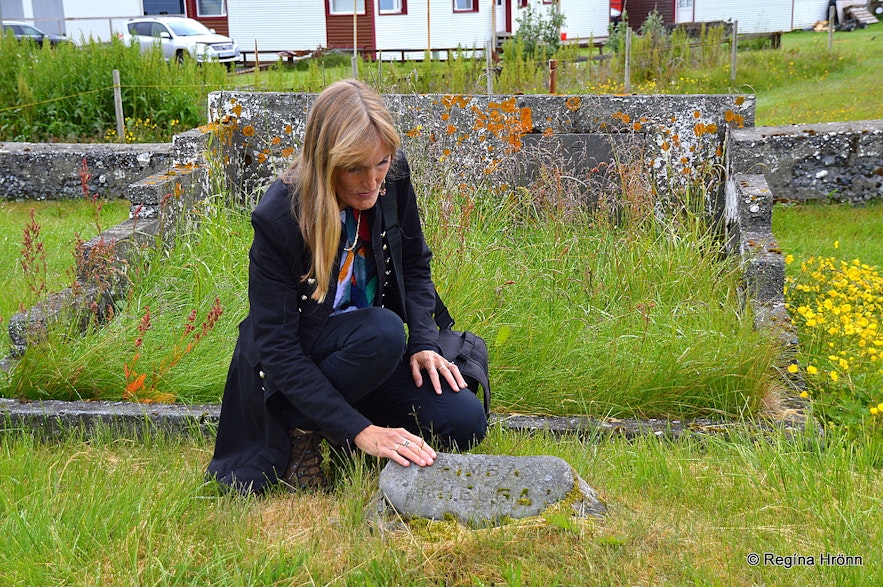 The gravestone, made by their grandfather, is so small and difficult to find in the cemetery

In Grenjaðarstaður up in North-Iceland I always visit the grave of my great-great-grandmother who was the pastor's wife and died of consumption after 4 of her small children died in an epidemic, measles. She, Regína Magdalena Sívertsen, is buried in the same grave as her 4 small children.

So many people lost several of their children in epidemics just 2 generations ago. Thank God for modern-day vaccinations, I say. 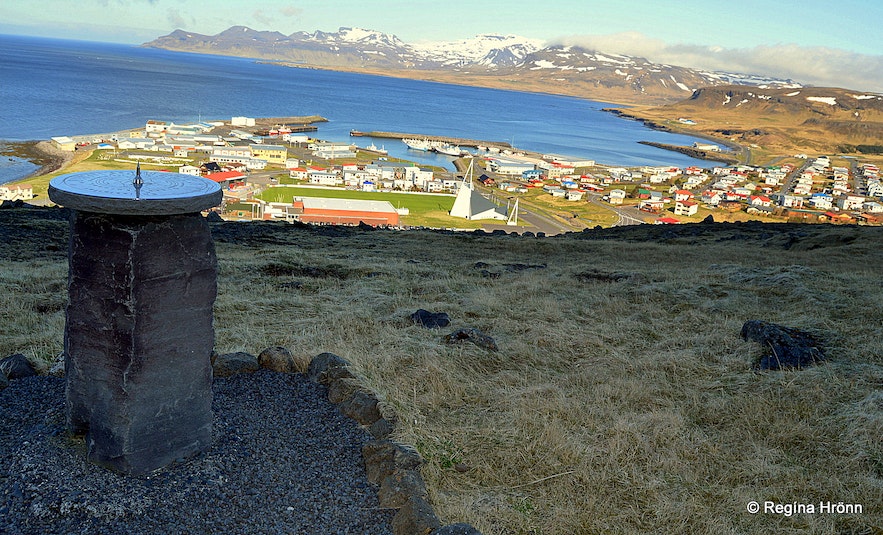 The mountain towering above Ólafsvík is a 418 meter's tall mountain called Ólafsvíkurenni or Enni for short. It is named after the settler of this area, Ólafur belgur, who settled the land between Fróðá and Enni.

The road lies through the screes, which is no problem on the new asphalt road, but when I was younger I remember this road as being a bit scary as it was high up and landslides and avalanches are common here.

I saw avalanche barriers in the mountains above Ólafsvík, but you can see these avalanche barriers in many towns and villages around Iceland situated below a mountain. If you look at my photo below you will see what they look like and will be able to recognise them when you see them on your travels in Iceland. I have often been asked what they are. 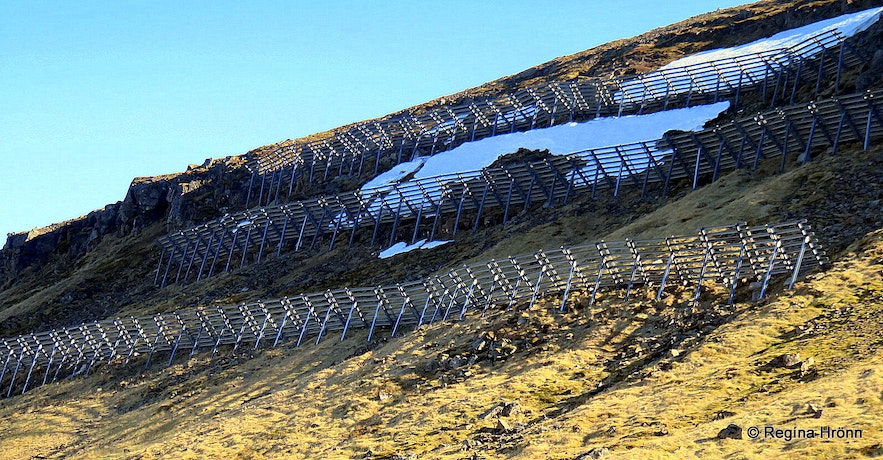 There is one mention of the Icelandic elves - Hidden people beneath Ólafsvíkurenni in Þjóðsögur Jóns Árnasonar - The Collection of Folklore of Jón Árnason.  It tells the story of a man finding himself by the mountain on New Year's Eve.

The tide was in and he couldn't get any further and it looked like he would have to sleep outside on this special night.  All of a sudden he saw a beautiful sight of 18 well-lit houses where elves were dancing to music. 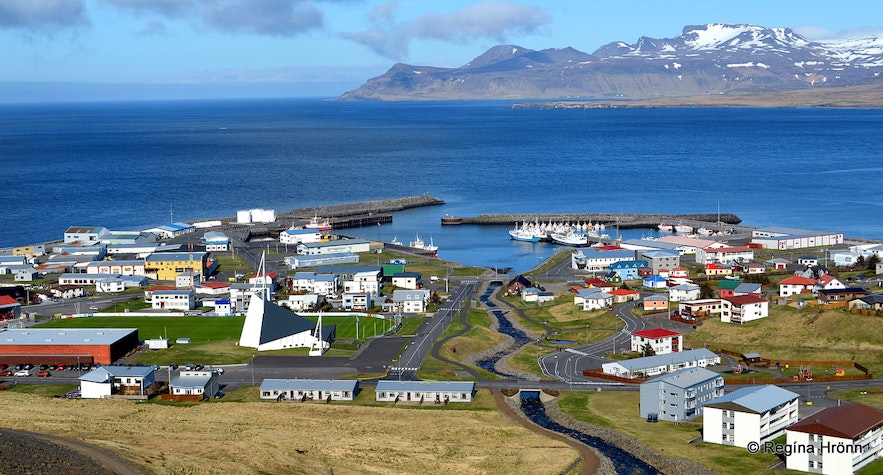 Ólafsvík as seen from above

I would love to see such a sight, but there are many accounts of elf sightings in Iceland like this one, so maybe there is hope for me yet. 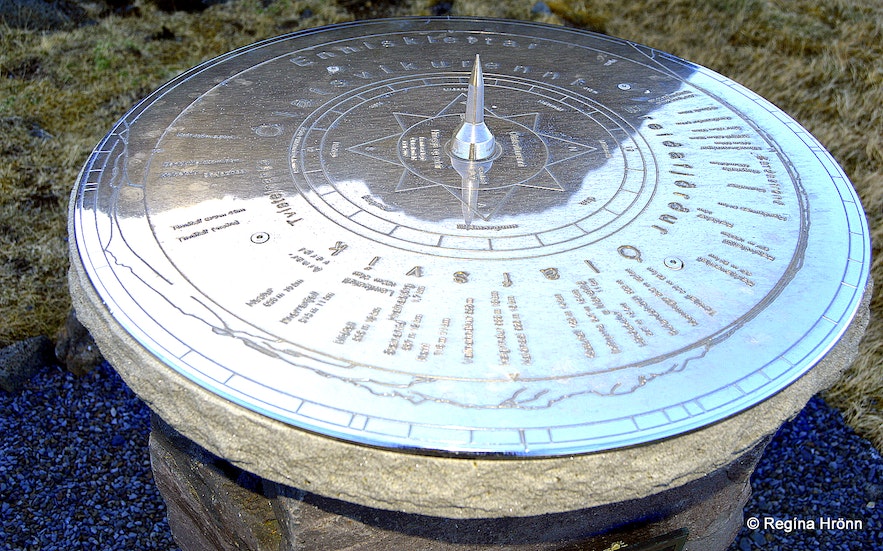 I would recommend a short hike up to Bæjarfoss waterfall which has a drop of 50 meters.  What we did was drive up Enni to have a look at the view-dial - from there is a fantastic view of Ólafsvík, Fellsströnd, Breiðafjörður bay, and Barðaströnd, the south part of the Westfjords of Iceland, if you can call it that.

We were there a bit late in the day, so the mountain had started casting a shadow on the view-dial, while Ólafsvík was bathed in the sunshine down below. 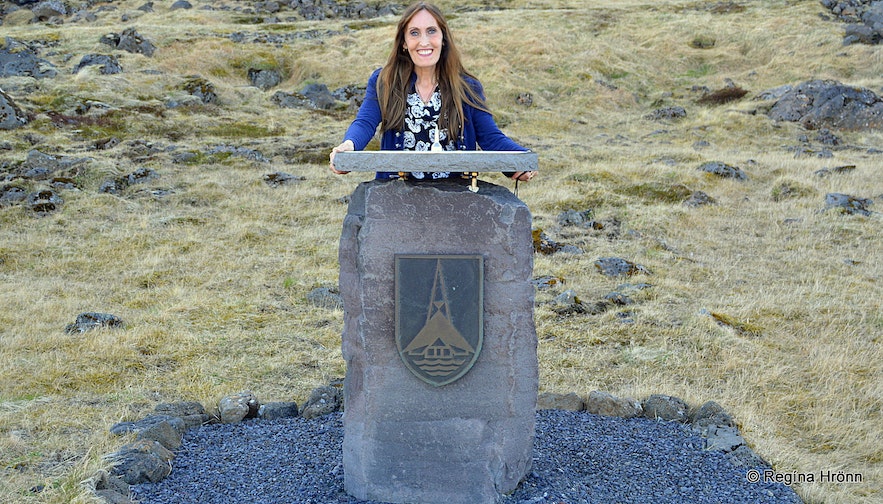 The road is a gravel road and you will find information signs by the turnoff to the gravel road. One of them has got information on Enni. Written on it is that the view-dial was made by Hringsjárgerð Jakobs Hálfdanarsonar in 2005.

Jakob is my father-in-law and I have a great interest in the view-dials around Iceland.

The view-dial was designed by Jakob and his children Jón Víðis and Þórný were his assistants. Framfarafélagið, Ólafsvíkurdeild erected the view-dial in August 2007. It is chrome-plated and shows the names and height of the surrounding mountains. The view-dial stands on a basalt column.

A lot of work is put into these view-dials and they are very expensive. It always saddens me when I see that people scratch their names or initials on the view-dials.

You will find a picnic area close to the view-dial with a table and benches made out of driftwood from Strandir, but if you drive in Strandir you will see driftwood in abundance. This spot is called Bekkurinn or the Bench.

Strandir is a very ruggedly beautiful area of Iceland - which I have written about in my travel-blog the remote Strandir in the Westfjords of Iceland - Stillness & Sorcery. 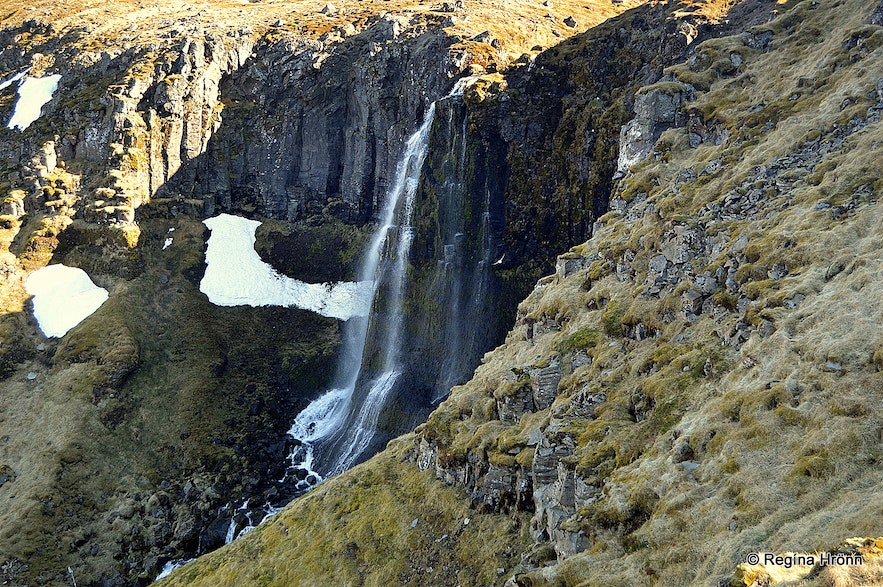 From the view-dial, I walked up to the Bæjarfoss waterfall in Bæjarfossgil gorge and could stand relatively close to it, but I was too high up, so I walked down to the waterfall and visited it from below for a better view. It is so majestic when you stand below it.

It is quite a beautiful waterfall. My photos are taken mid-May when it was still cold and grey and the view-dial was in the shadow of the mountain. And there were snowbanks in the mountain by the waterfall. I will have to go back for summer photos!  The waterfall looks like a thin bridal veil. 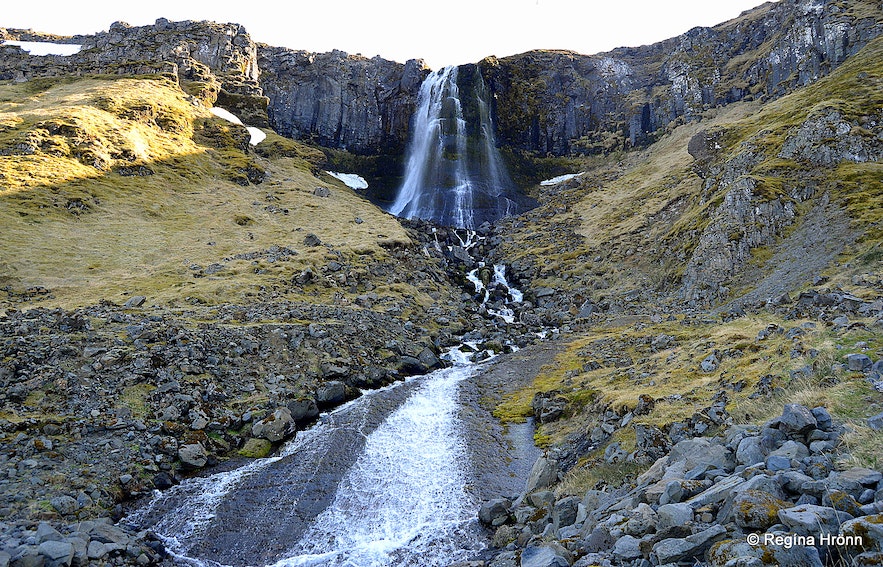 I also want to show you a beautiful spot just east of Ólafsvík. If you drive a little further and the tide is out, then you can visit this beautiful cliff beach where the rocks look like giants guarding the shoreline!

Around this beach, you will also see basalt columns. There are openings in the rocks which is fun to play in - just be careful that the tide doesn't come in unexpectedly! 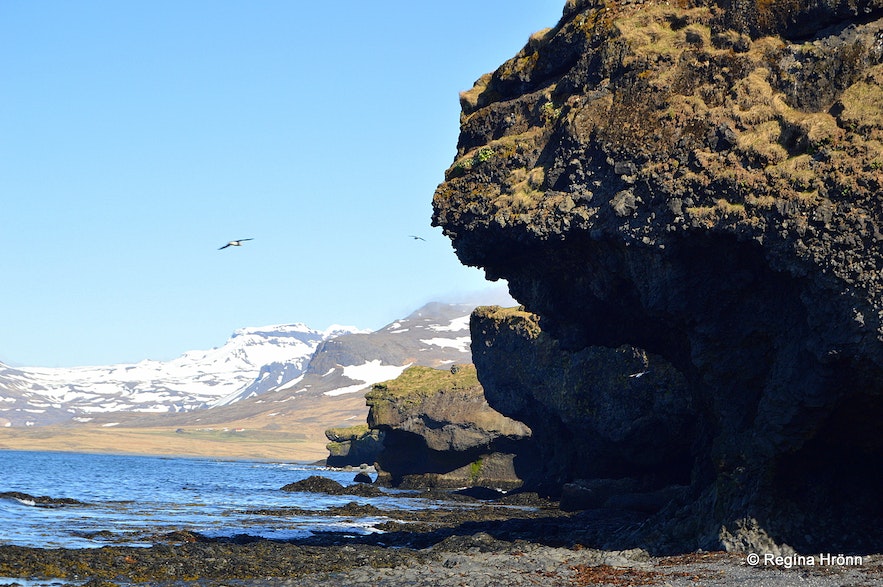 The rock giants by Ólafsvík

There must be a story behind these rocks, they look too much like giants not to have some folklore of their own. I will write more if I find folklore about these rocks :)

In my photo below you can see the distance from Ólafsvík to the rocky beach. 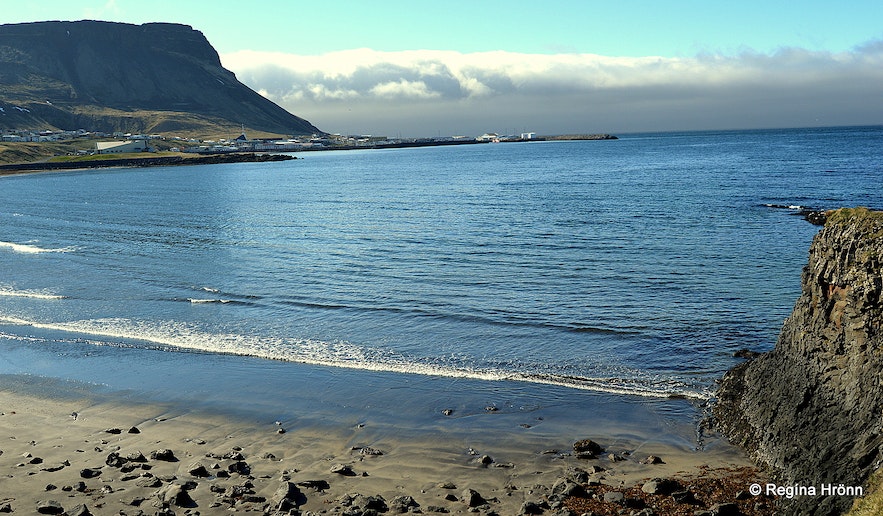 The view of Ólafsvík from the rock giants

Here is the location of Ólafsvík on the map.

Have a lovely time in Ólafsvík :)