In a mysterious cave by the marina in Keflavík town lives a Giantess with a heart of gold. The Black Cave of the Giantess was opened on the 6th of September 2008 during the town festival Ljósanótt - Night of Lights.

On that day the Giantess moved all the way from her mountain into the cave in SW-Iceland. She doesn't have a name, as she has forgotten it, but is referred to as Giganta - Skessan in Icelandic. 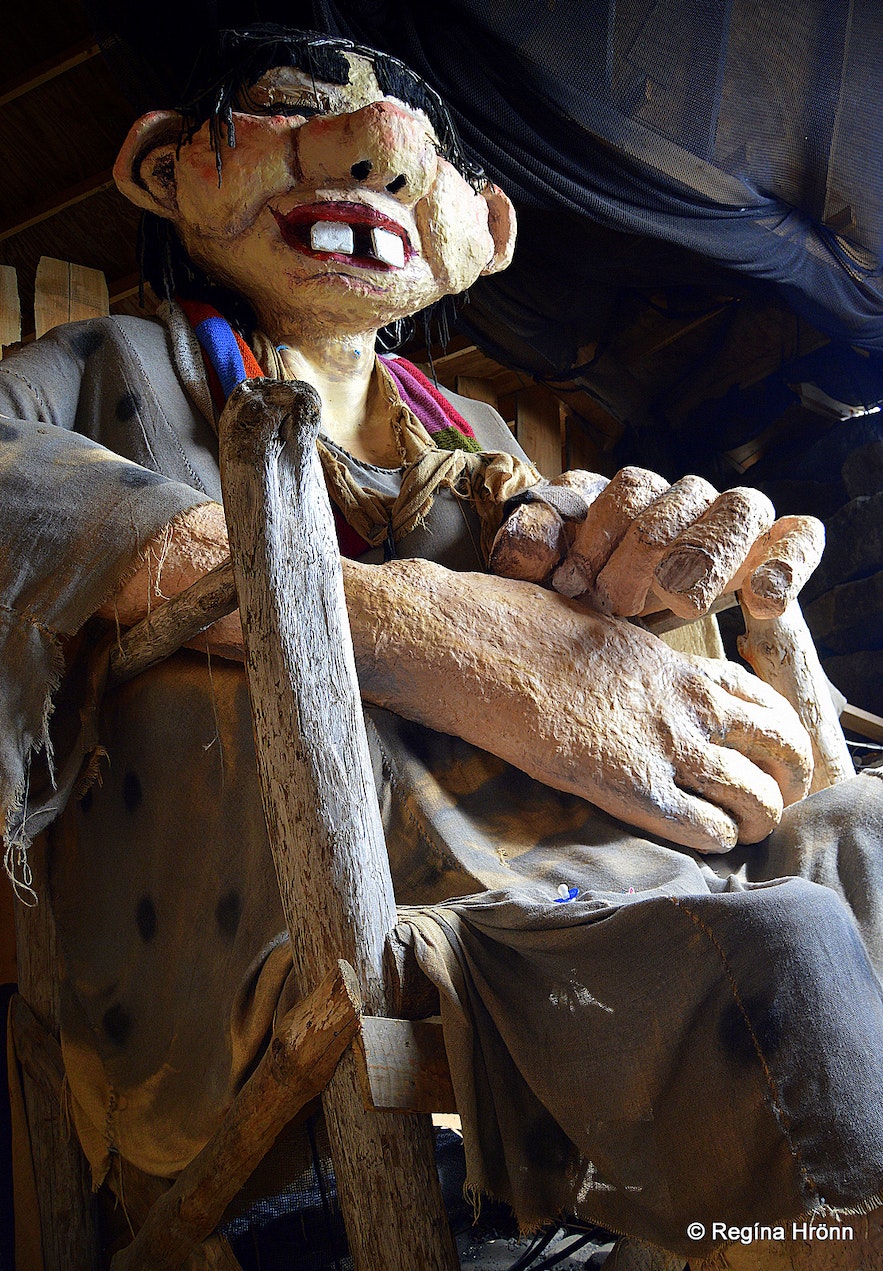 These stories are a very popular series of children's books on the little girl Sigga and the Giantess (16 in all). The last book in the series describes her migration from the mountain into the cave in Keflavík.

Herdís got the wonderful idea of building the cave in the lovely town Keflavík, which together with the neighbouring Njarðvík, Hafnir and Ásbrú form Reykjanesbær municipality. 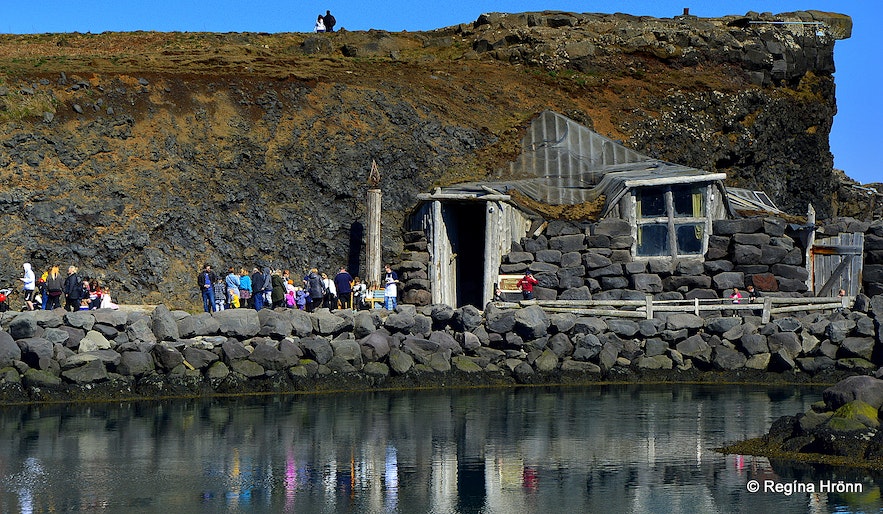 The cave of the Giantess

The giantess is many hundred years old and over 5 meters high with eyes the size of a football. She sits in a rocking chair in the kitchen in the cave and you can see through the kitchen door how she breathes and burps and does other stuff which children always find very funny ;)

The cave is 150 sq.m in size and in it, you will find a giant bed and a giant chair. There is light in the cave so you can go and have a peek at the Giantess through the window when the cave is not open. This cave and the Giantess were created by the artist group Norðanbál. 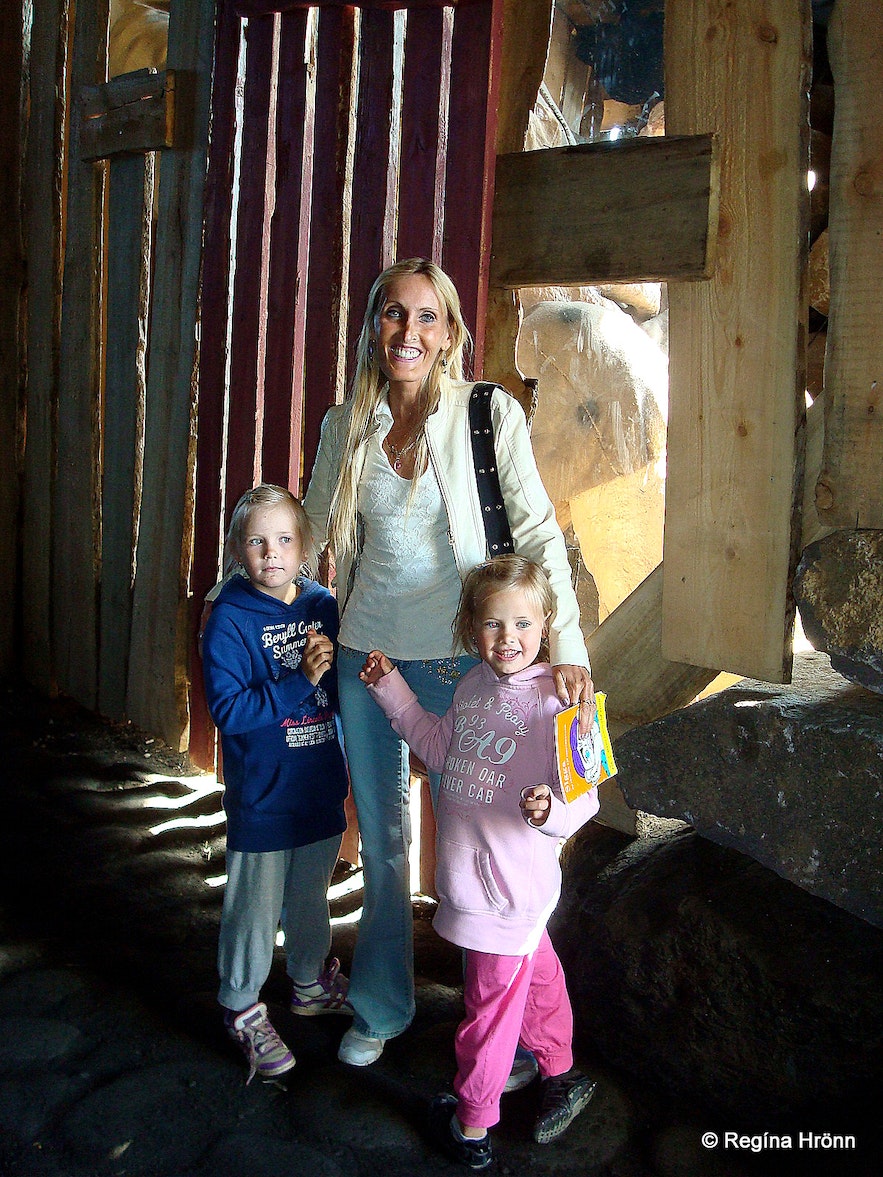 With my nieces in Skessuhellir - we brought one of the Sigga books with us :)

I have brought my nieces to the cave and the little ones were not at ease when they heard the big Giantess snoring, so I had to calm them down. The Giantess is huge compared to children, so I understand that they might be a little frightened.

But as soon as they understand that she is a good giantess and won't get out of her rocking chair they calm down ;)

The Giantess is a kind giantess with a big heart so kids never have to fear her. She has got a post-box in her cave for kids to leave their letters to her, just in case they want to tell her something or ask her a question. Toddlers can also leave their pacifiers on a tree in the cave. 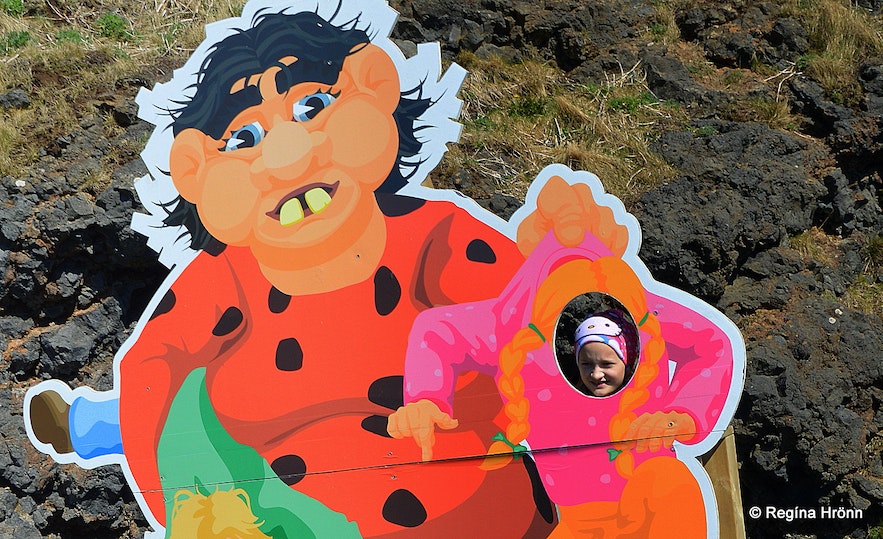 The Giantess in the Cave

You will find myriad encounters with giants and giantesses in the old Icelandic Folklore of Jón Árnason, which I often refer to in my travel-blog. And no wonder as all around Iceland you will see trolls in the mountains and in the lava. Often you will notice two pillars of rock close to one another - these are two trolls in love.

See also: The 3 Trolls who wanted to separate the Westfjords from the Mainland of Iceland - Icelandic Folklore

I have already told you many of these stories, as I very often spot a troll on my travels around my country. I am now going to tell you a little bit about how the little girl Sigga met the Giantess. 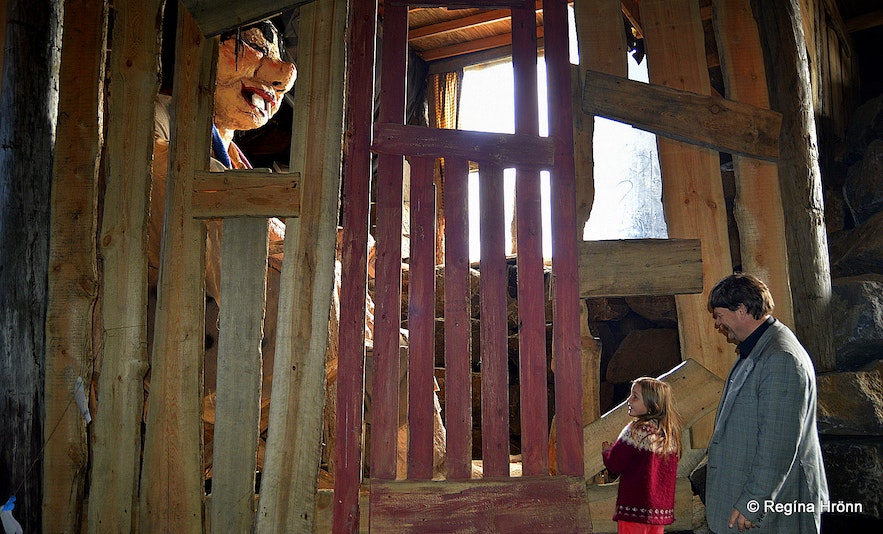 Visiting the Giantess in the Cave

I roughly translated their encounter from the first book in the series "Sigga og skessan í fjallinu" - Sigga and the Giantess in the Mountain:

"The day before Sigga's 6th birthday her mother sent her berry-picking. Her mother was finishing making her birthday present and didn't want Sigga to see it. Sigga took her berry bucket and went high up into the mountain above the farm where she lived. She went so high up that she had to crawl on all fours.

She suddenly noticed that she had lost one of her shoes. While searching for it she found something strange - it looked like a boat with a flat base. 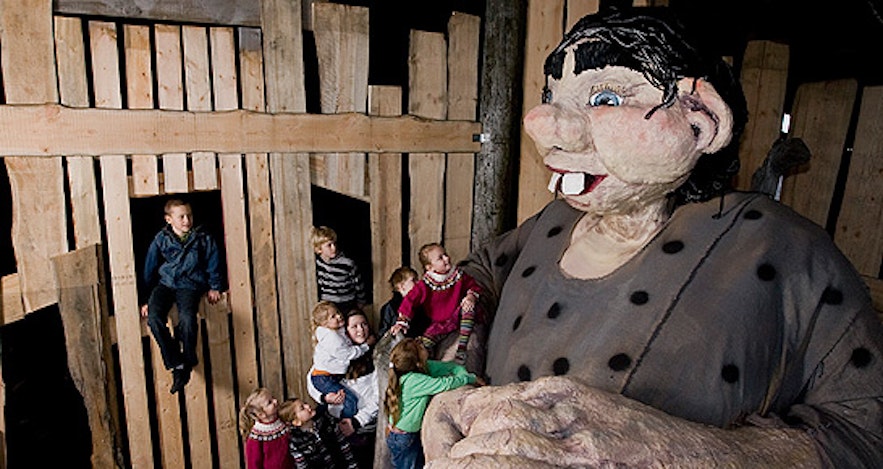 She crawled into the "boat" and heard some racket from the mountain - a giantess came limping down the mountain with a giant shoe on one foot, which looked like the boat Sigga was sitting in, and Sigga's tiny shoe stuck on her pinky toe!

Sigga started laughing and wasn't scared of the Giantess, as she was so friendly-looking.

Sigga invited the Giantess to her 6th birthday the day after and the Giantess brought her a doll's house (big enough for all the birthday guests) which she had made for Sigga.

The Giantess beamed like the sun as all of a sudden she had made a lot of friends, whom she invited to visit her in her cave, and knew that she would never again be lonely." 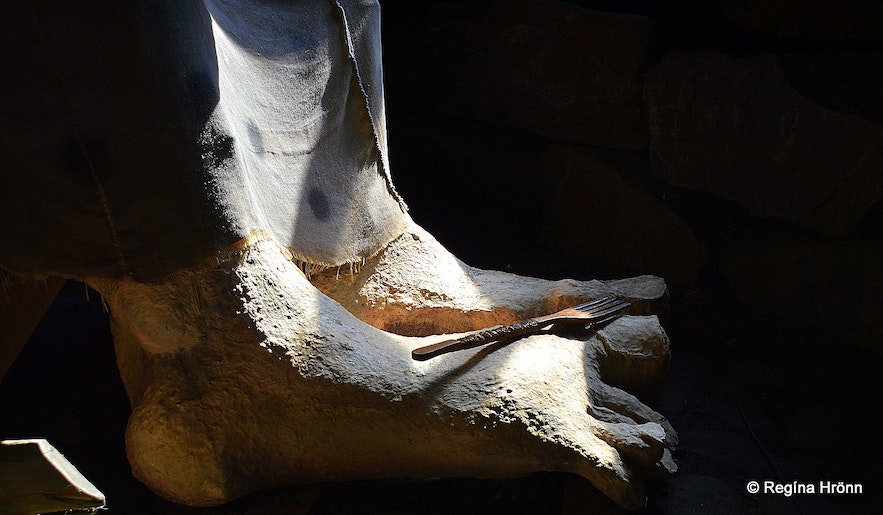 The toes of the Giantess

From then on Sigga and the Giantess became best friends and the following 15 books tell us about their adventures together. In one book the Giantess accompanied Sigga to school and in another book, the Giantess had to go to the dentist.

The Giantess babysat Sigga in her cave and made her huge "lummur" - small, Icelandic pancakes. As a thank, Sigga's mother made a new dress for the Giantess, which she only uses on very special occasions.

The Giantess once rescued the inhabitants in the village from a fire in a block of flats and got a telephone in her cave as a reward for the rescue. 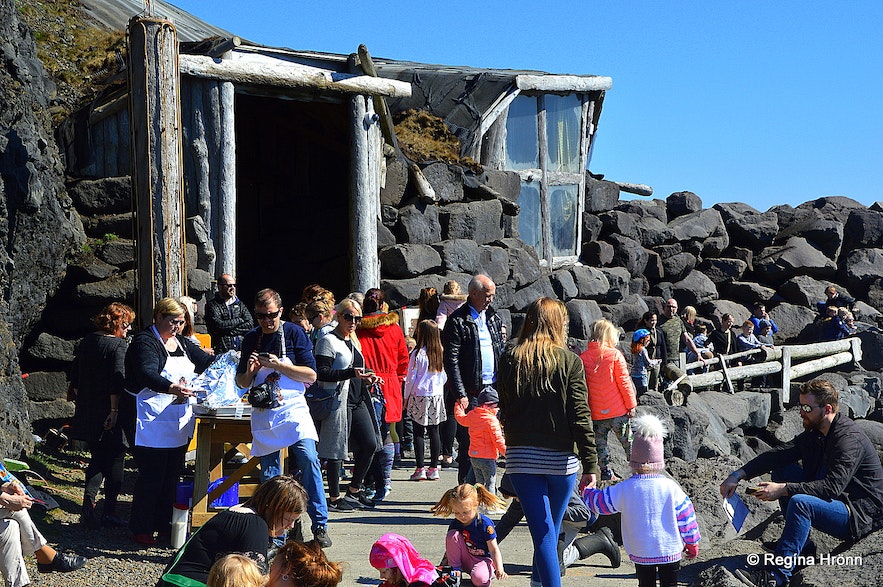 The Giantess in the Cave during a festival in Keflavík

In one book the Giantess learned how to swim and a whaler caught her in their net thinking that she was a big, strange whale!

The Giantess saved the children of the village from an avalanche and she saved some Spanish tourists from certain death in Icelandic nature, when they had not shown the forces of nature enough respect.

In yet another book the Giantess walks out on the drift-ice and finds a polar bear cub, which she thinks is a cat, and takes it back with her into her cave. The mother of the polar bear cub followed them...

These are just a few examples of the things that happened to Sigga and the Giantess in the 16 books by Herdís Egilsdóttir. 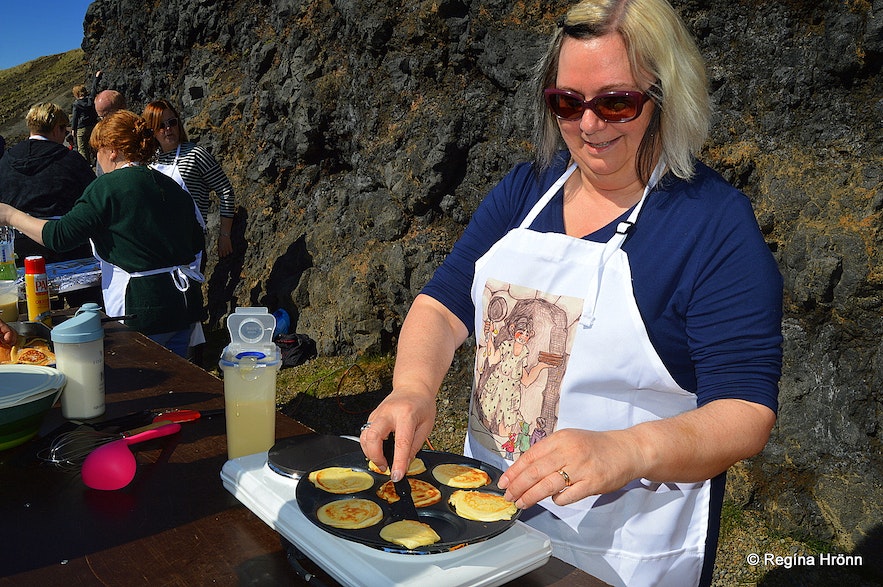 In the last book, the Mayor of Reykjanesbær offered to build the Giantess a fully furnished cave, after she rescued some fishermen on a fishing boat, who met with dangers at sea in a violent storm at Suðurnes and headed for the cliffs.

In September 2008 the cave was ready and the Giantess moved into her new home by the harbour. 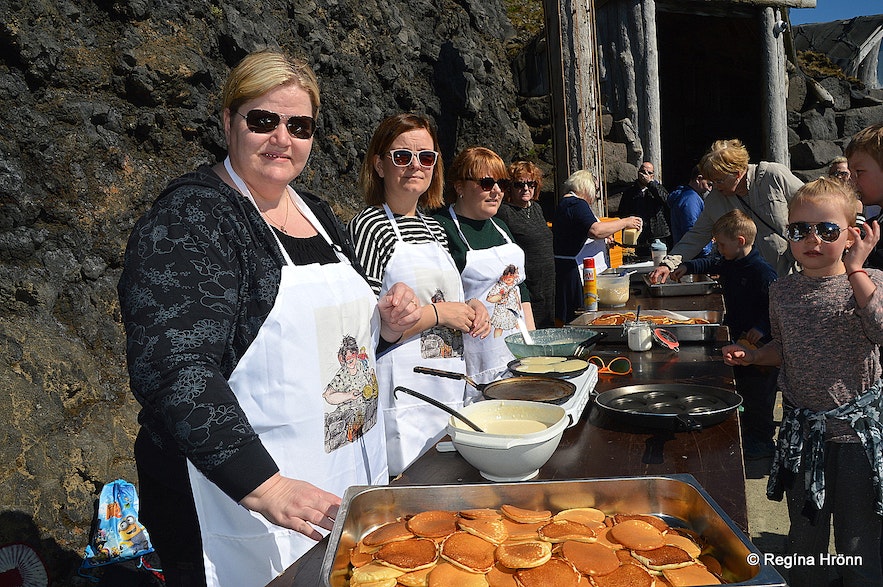 I absolutely adored these books as a child and re-read them all (the last ones for the first time) when I was writing my travel-blog - and they still have the same effect on me as when I was a little girl - they are truly magical.

During the Keflavík festival Ljósanótt - the Night of Lights - the traditional Icelandic lummur - are made by the cave and you will find a myriad of locals visiting the Giantess in the Cave. 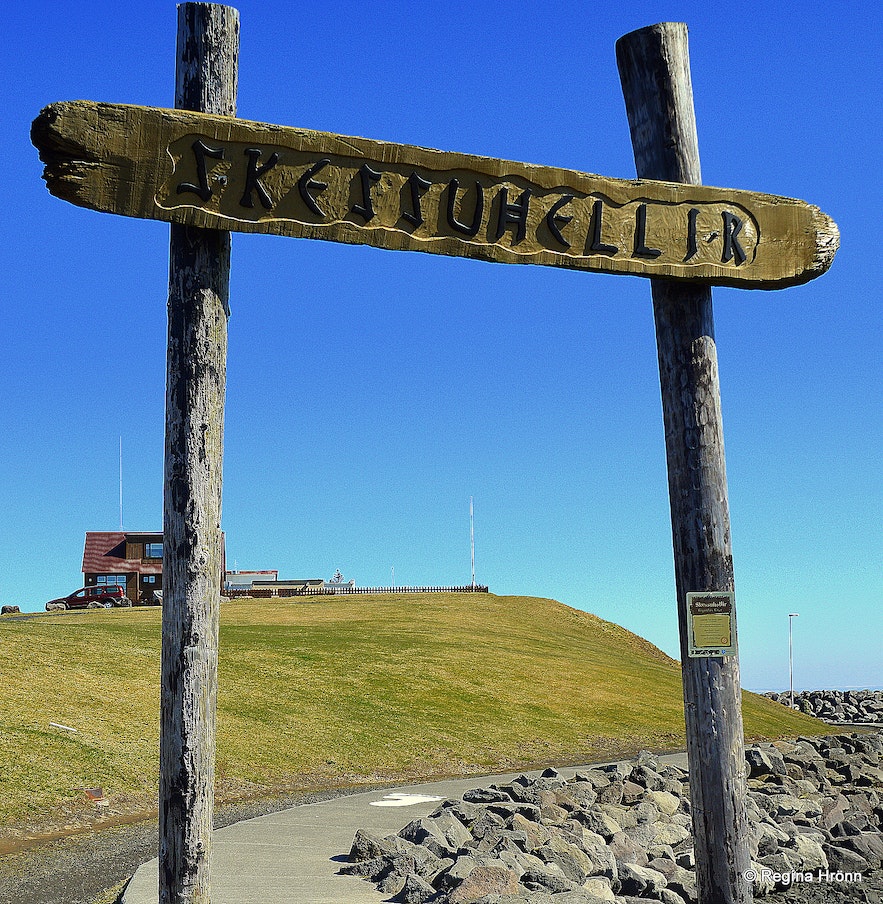 The gate leading to Skessuhellir - the Cave of the Giantess

I am lucky that my husband is a professional magician and often performs at these local festivals. I take his photos so I always tag along with him. He had a magic show at the Ljósanótt - Night of Lights in Keflavík, and after his show, I was free to roam around and take part in the festivities and get my own photos for my travel-blog.

The Black cave and the Giantess are located by the marina at the very west end of Keflavík town. To visit the cave drive to the end of the main street and down to the harbour. 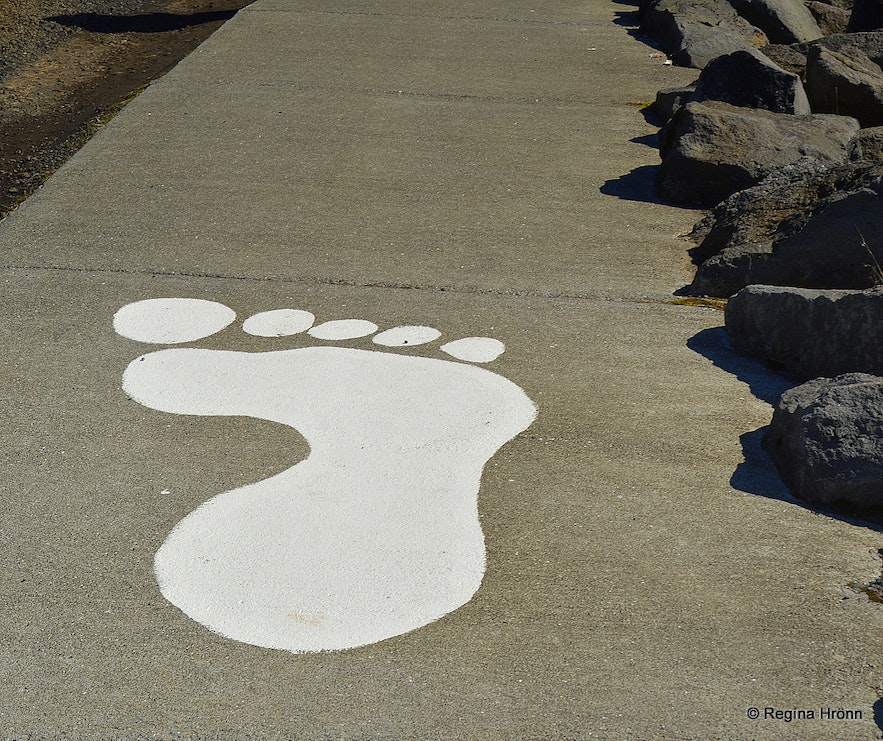 The Giantess Giganta has big feet!

There you will see a big sign "Skessuhellir" which means the Cave of Giganta. If you are not sure where to go just follow the huge footsteps ;)

Keflavík is located by the international airport. To visit the cave you can rent a car at the airport  and visit the cave on your way to the Blue Lagoon or Reykjavík, Iceland's capital city.

And don't miss visiting the Reykjanes Geopark, with its many interesting sights.

I have written travel-blogs about a couple of the sights on the Reykjanesskagi peninsula:

Have fun in Keflavík :)