Skriðuklaustur is a beautiful place to visit on your travels in East-Iceland. It is a Centre of History and Culture (Gunnarsstofnun) and one of the greatest historic sites in Iceland. The last Catholic monastery in Iceland, an Augustinian monastery, operated on this spot from 1493-1552. Its main purpose for these 60 years was to attend to the sick.

This beautiful building is the former home of the noted author Gunnar Gunnarsson (1889-1975). 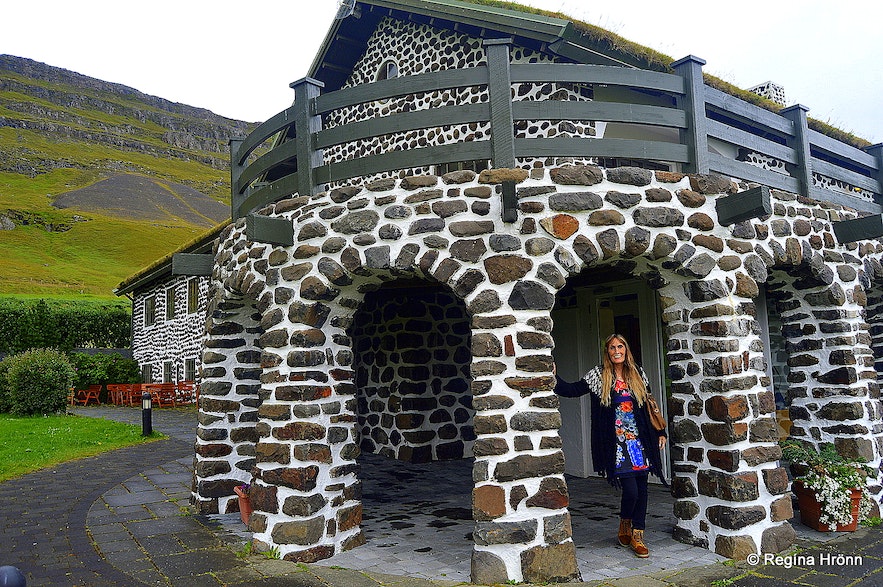 Gunnar built this manor at Skriðuklaustur in 1939. It was designed by the German architect, Fritz Höger, who was a friend of Gunnar's. Fritz never came to Iceland, but I am sure that he was proud of how his beautiful work turned out.

It is a mixture of a European mansion and a cloister with a reference to the traditional Icelandic turf houses.

I think it is an absolutely beautiful building and love the turf roof :) The double walls have turf insulation and there are basalt rocks in the concrete walls, which give this beautiful, one-of-a-kind Icelandic building, a very distinctive look. 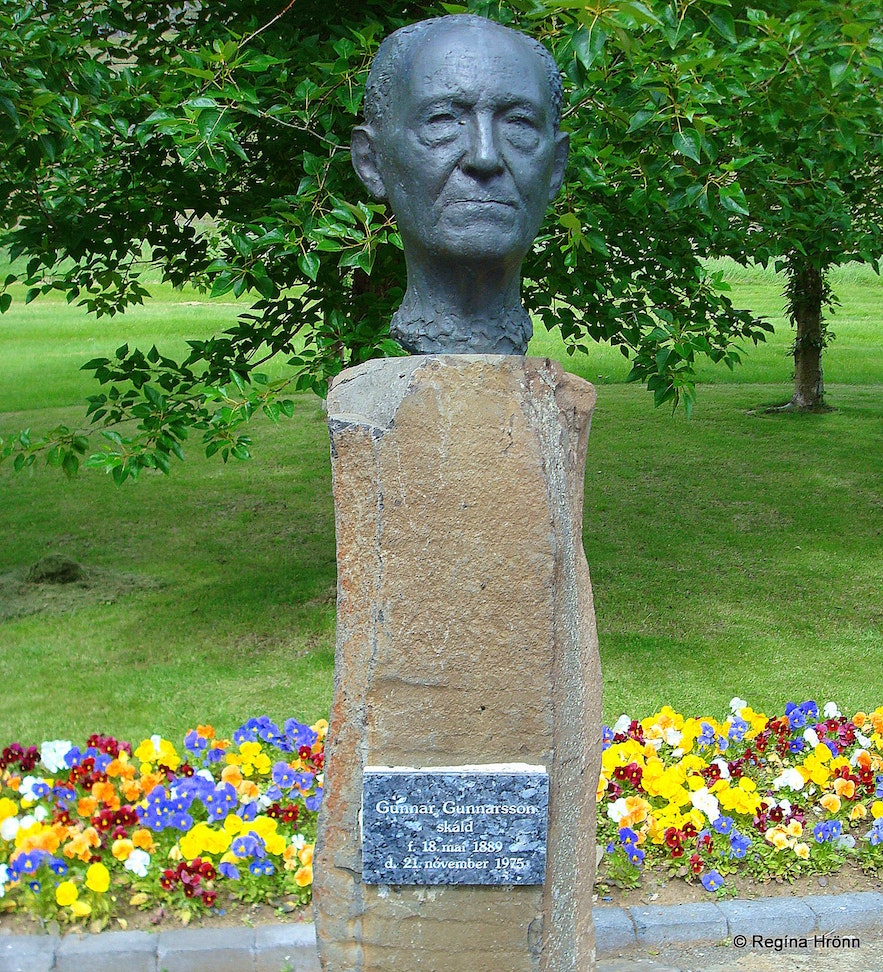 The memorial for Gunnar Gunnarsson at Skriðuklaustur

The ambulatory was added to the mansion in 1974-1982 and a new turf roof with a watering system was installed on the 100th anniversary of Gunnar Gunnarsson in 1989.

Gunnar had lived in Denmark for 30 years and when he returned back home to Iceland he wanted to build a European manor in the Icelandic countryside. He was born in Valþjófsdalur in Fljótsdalur in East-Iceland, where he lived for the first 7 years of his life. He built his 325-335 sq.m. manor on the land of Skriðuklaustur very close to his birthplace. 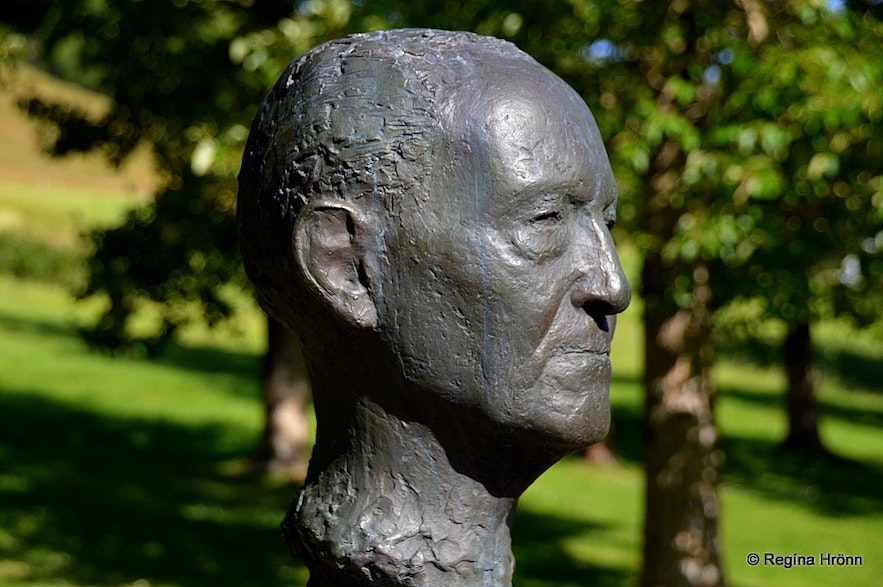 The bust of Gunnar Gunnarsson

Gunnar had planned on building all in all 2,800 sq.m. with several outhouses and having large-scale farming at his big estate with up to 1,500 sheep. He didn't manage to do so, even though some of us might think that the 350 sheep, 10 horses, 5 cows, cattle, pig, and hens he kept would be regarded as large enough.

Unfortunately, his timing was off as WW2 began and workers flocked from the countryside to the villages and towns, where there was ample and better-paid work to be had.

Gunnar donated Skriðuklaustur to the Icelandic state 9 years later, in 1948, under the condition that it should be used for experimentation in farming and a residence for artists and authors. Gunnar himself moved south to Reykjavík. At Klaustrið artists and authors can apply for a stay at the writer's retreat. 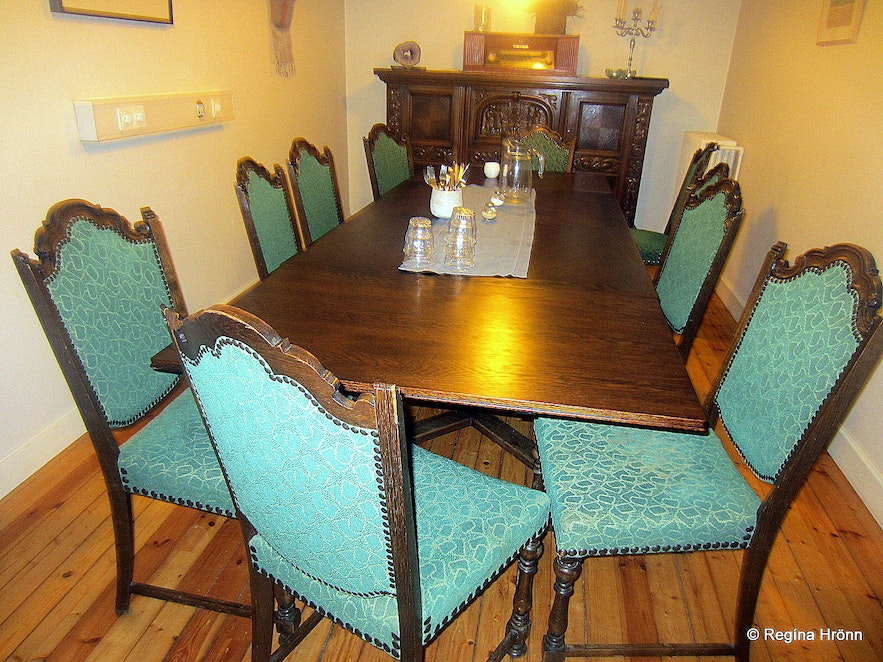 At Skriðuklaustur - I took this photo back in 2008, henge the quality of it

Gunnarsstofnun is dedicated to the work of Gunnar Gunnarsson and you will find a bust of Gunnar in front of his former home.

Gunnar Gunnarsson was a very well known author and novelist and mainly wrote in Danish. Amongst one of his famous works is Aðventa - the Good Shepherd. It is a very popular book, written in 1936 on the ordeal of Fjalla-Bensi, Benedikt Sigurjónsson.

Aðventa was first published in Leipzig in Germany and has since been translated into 10 languages!

Tumbi was built with turf and rock

Back in 1925, when Fjalla-Bensi was searching for left behind sheep in the highlands of Iceland, he got caught in a major storm and had to stay alone with the sheep in a little hut, made of turf and stone, during the holy time of advent. Much like this little hut in my photos.

I visited this hut on my way to the Askja caldera in the highland. It is the only hut I have seen with a tree growing on top of it, quite distinctive.

It is cool visiting it in the summertime, but just imagine what it must have been like being stuck in an awful blizzard in the highland of Iceland alone in such huts.

Now, back to Skriðuklaustur, where exhibitions, concerts, and talks are held amongst other events. The manor reminds me of German and Danish mansions and it is very lovely finding such a beautiful house here in East Iceland.

We have nothing else to the liking of this beautiful mansion in Iceland.

Skriðuklaustur has irregular opening hours, but in the summertime in June-August, it is open from 10-18.  In May & September from 11-17, April from 12-16, and October 1st-15th from 12-16. These opening hours can change so check out the website of Skriðuklaustur.

If you are travelling outside of these opening hours you can phone ahead at +354 471-2990 to get a peek into this beautiful mansion.

There is an entrance fee to the museum, where you will also get guidance.

Archaeological excavations of the old monastery at Skriðuklaustur

Archaeological excavations of the old monastery at Skriðuklaustur

During the archaeological excavation, old graves were dug up and the bones examined, which shed new light on the function of the monastery and the ailments of the patients at the hospital. Around 260 skeletons were exhumed in the old cemetery.  Many of these bones show that the patients had serious illnesses; cancer, hydatid disease, smallpox, syphilis, TB etc. 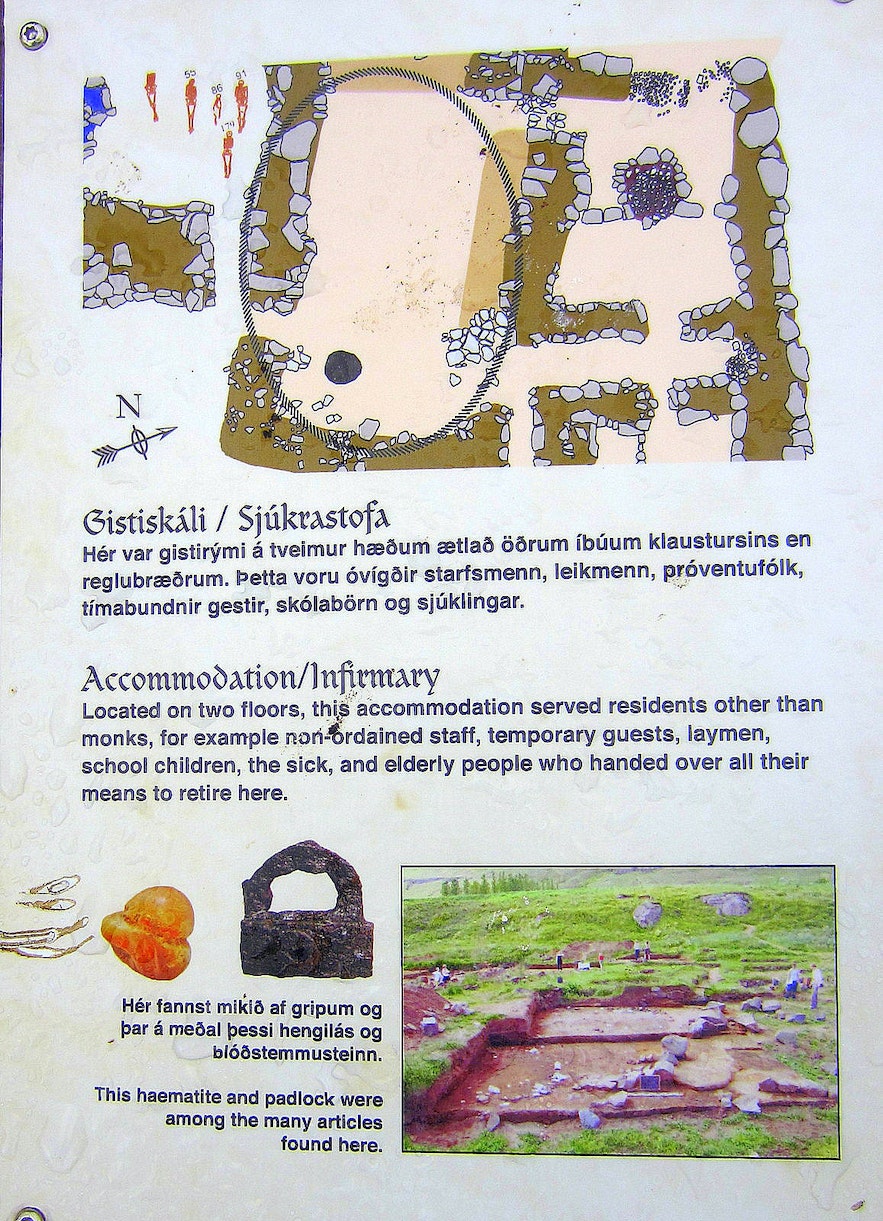 Many skeletons of babies and premature babies were also exhumed.

Two of the graves in the cemetery were most likely the graves of priors, who were buried with women and children like they had been a family.

This might seem strange as the Catholic priors should have been celibate. But it seems like different rules applied here in Iceland. It was a rule rather than an exception that the clergymen had women and children. They were not allowed to marry though, but the women were called escorts. 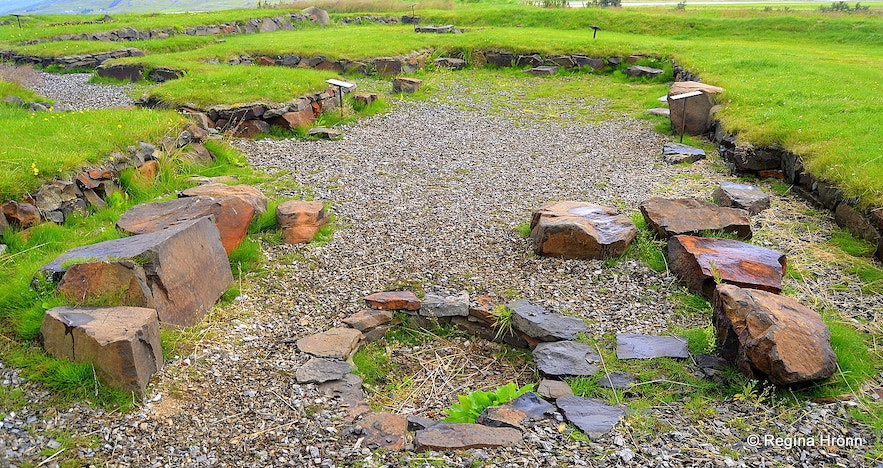 Every room of the monastery has been marked with its function and an information sign has been put up to give us a better insight into the life and work at the monastery.  You can walk around this area and have a "peek" into each room. 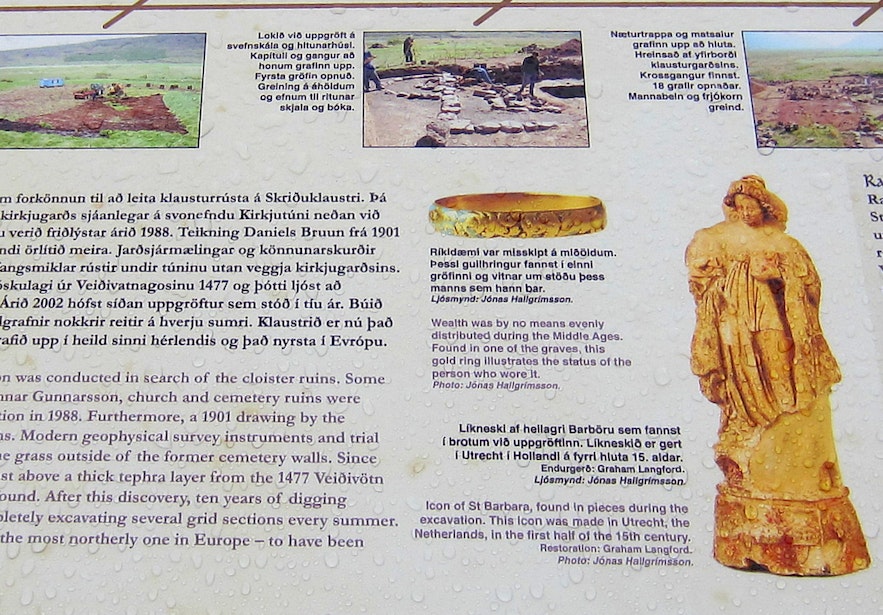 Here you can find an infirmary, a cloister garden with a well in the centre, sleeping quarters for the monks, the quarters of the bishop, a chapel, a pantry and a dining hall, a brewery, an infirmary, and many other rooms.

The cloister church, which was consecrated in 1512, was the most important building in the monastery. Here are also night-stairs for the monks to enter the church, as they had to be able to access the church 24/7. 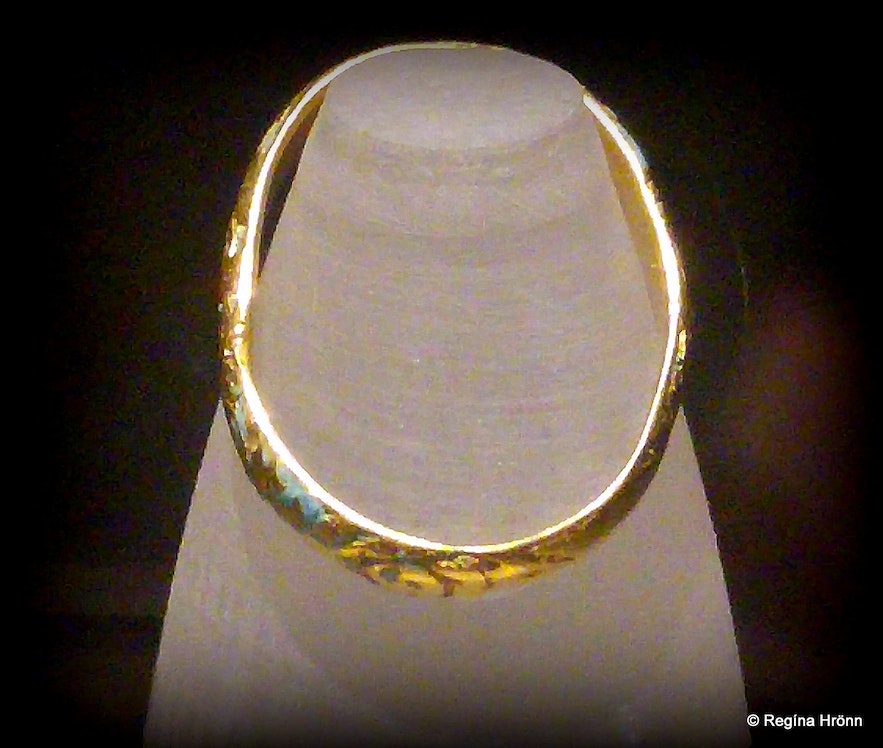 It is very interesting wandering around the different rooms, imagining what life must have been like during its time of operation.

Several objects were discovered during the excavation, including a beautiful gold ring (see my photo above), which I found on display at a temporary exhibition on monasteries in Iceland at the National Museum of Iceland.

The ring was found in a grave. It was customary for the nuns and monks to wear a golden ring as a symbol of their vow. 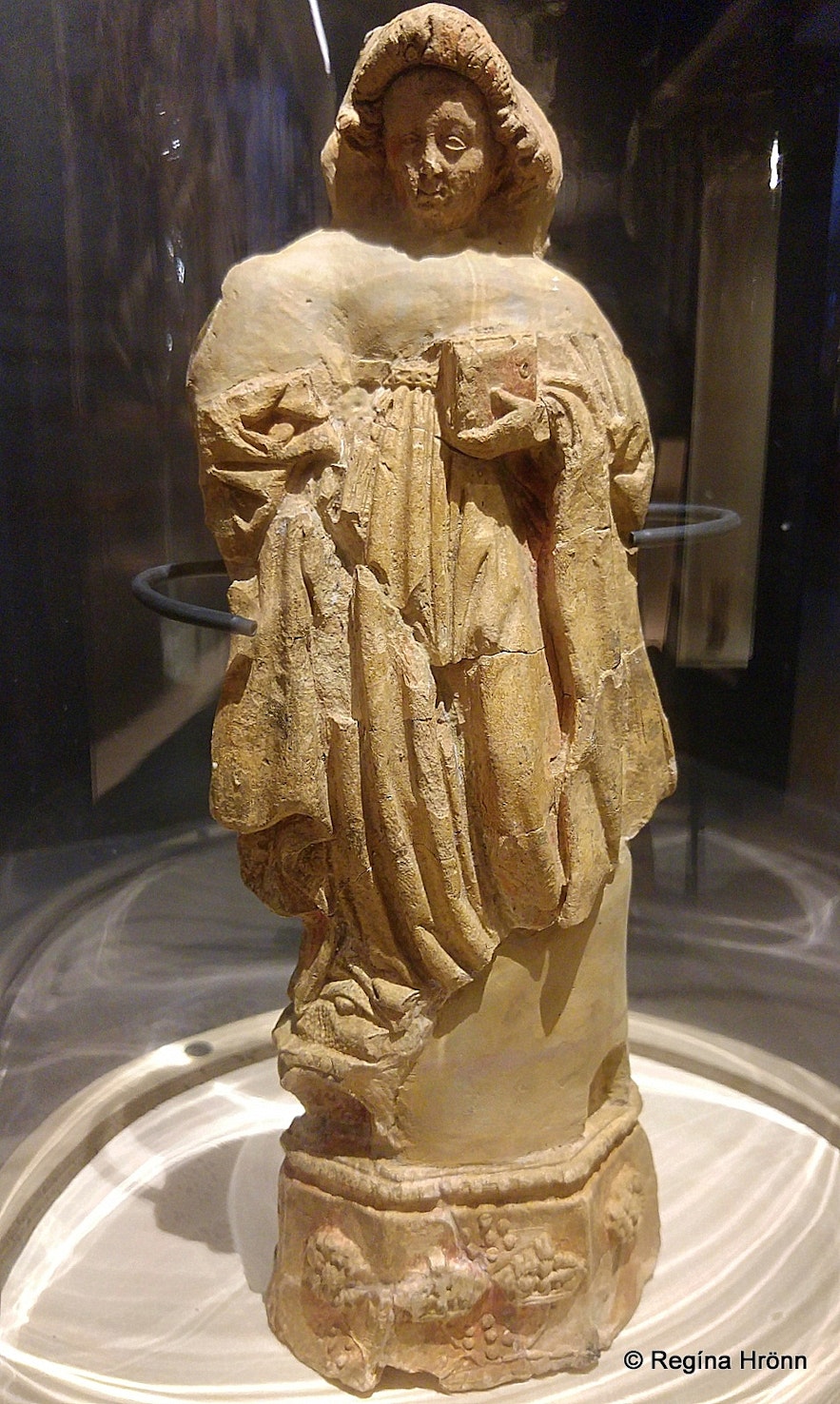 A figure of St. Barbara found at Skriðuklaustur

A figure of St. Barbara was also found, dating back to the 15th century, made in Utrecht in the Netherlands. The torso was found in pieces in the church and the head in the kitchen. It might have been broken and disfigured after the adoption of Protestantism in Iceland, which was common back then.

You might notice that her symbol, the tower, is missing. St. Barbara was believed to protect against fever and sudden death. The figure was also on display at the National Museum of Iceland. Some rosary beads were also unearthed, a knife and a chess piece to name but a few.

This is the only whole monastery, which has been excavated in Iceland and the northernmost monastery in Europe.

The grave of the vagrant Jón Hrak 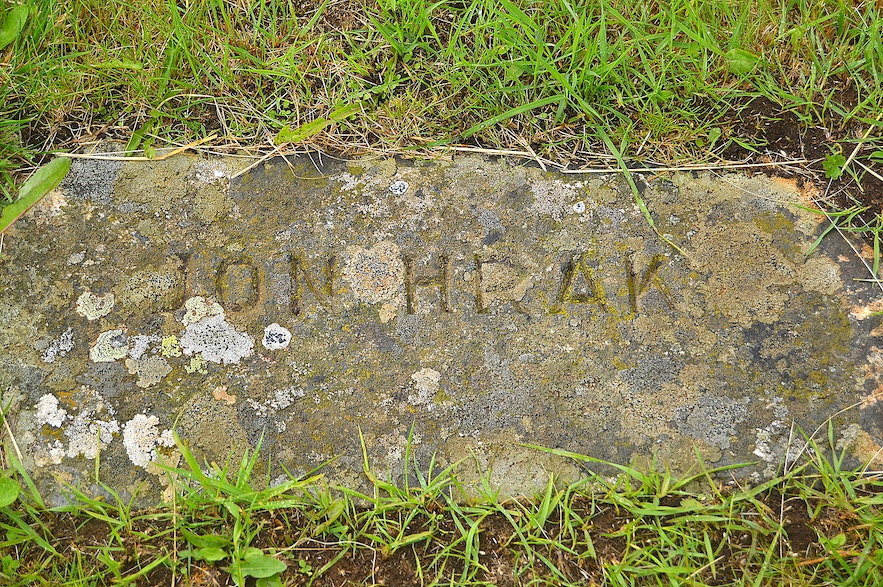 The grave of the vagrant Jón Hrak at Skriðuklaustur

Only one gravestone can be found in the cemetery by Skriðuklaustur, the grave, and gravestone of the vagrant Jón Hrak.

There are many tales of this vagrant and it was believed that he was buried here in the cemetery. What is unique with his grave is that he is not buried east-west, which is customary here in Iceland, but south-north (út og suður).

The Chief Forester Hákon Bjarnason (skógræktarsjóri) had a tombstone erected on the grave. A well-known poem about Jón Hrak goes like this in Icelandic:

Everybody is buried lying East and West,

The grave of Jón Hrak

One of the reasons why Jón Hrak is believed to have been buried this way is that he was a vagrant and might have died in the dead of winter, so those who buried him didn't show him the respect of burying him in the proper manner.

Another reason might be that those, who buried him, didn't want him to return from his grave so they turned him in the "wrong" direction. 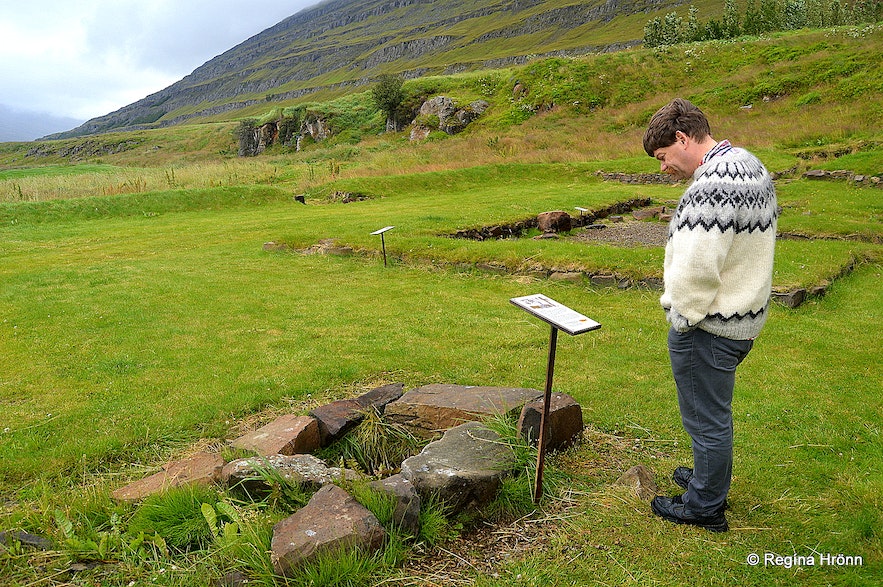 I found a story in Þjóðsögur Jóns Árnasonar - The Collection of Folklore of Jón Árnason, which I often refer to in my travel-blog, telling a different story of Jón "Flak" in a different cemetery with the same poem - but here Jón "Flak" is repeating this poem after his death.

So this is not carved in stone, but an interesting story all the same. 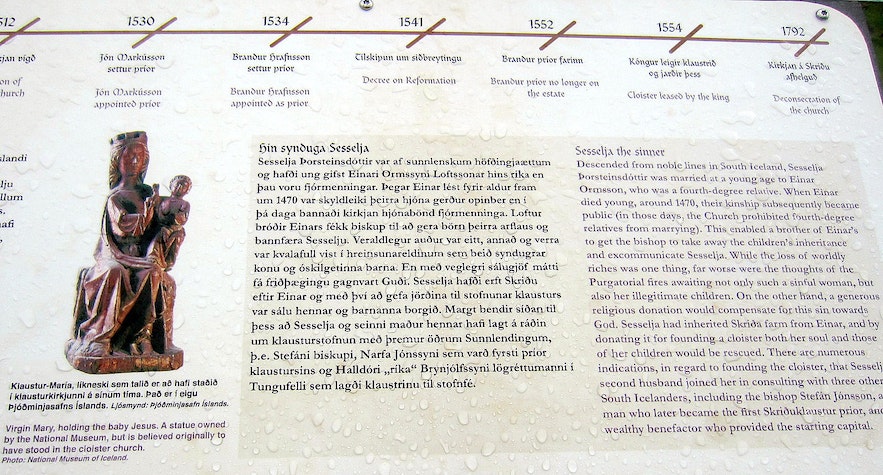 I just want to tell you in a few words how the old land Skriða (now Klaustur) came into the possession of the Catholic church. Sesselja Þorsteinsdóttir had married her second cousin once-removed, Einar Ormsson Loftssonar the Rich. Einar died in 1470 and after his demise, the cousinship to his wife was revealed, but at this time it was forbidden for second cousins once removed to get married.

Einar's brother, Loftur, convinced the bishop to strip his brother's children of their inheritance and to excommunicate Sesselja :( The only way for Sesselja to save her soul and the soul of her now illegitimate children was to donate the land Skriða, which she had inherited from her husband to the Catholic church, for a monastery to be built there.

I got this story from an information sign on the excavation site, but have not seen it anywhere else.

The Visitor centre hosts an exhibition on the circulation and formation of nature and the wildlife in this area. It is a really interesting exhibition and so worth a visit. These Information centres are so helpful, and I always stock up on maps and information pamphlets on the area, as in the different regions of Iceland you can get more detailed information on the area in question. 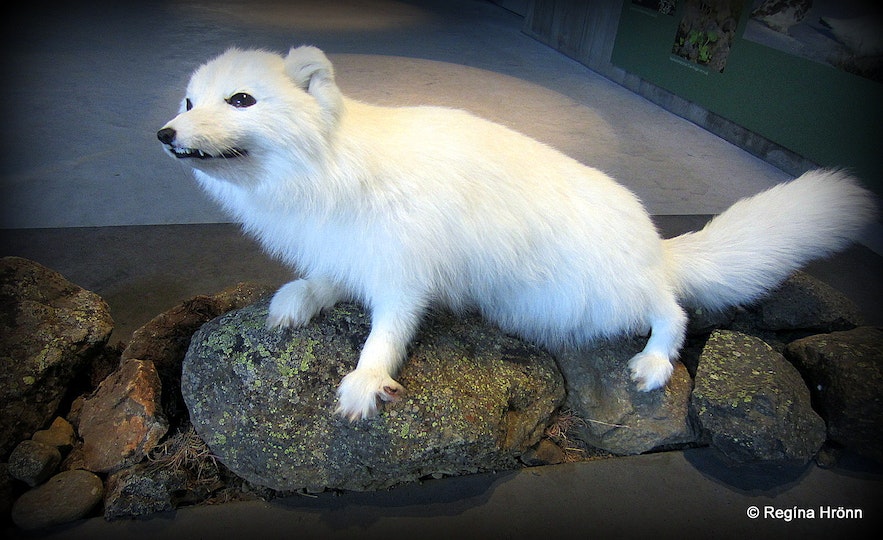 The Arctic fox at the Snæfellsstofa visitor centre

I have written other travel-blogs about interesting sights in the vicinity of Skriðuklaustur: 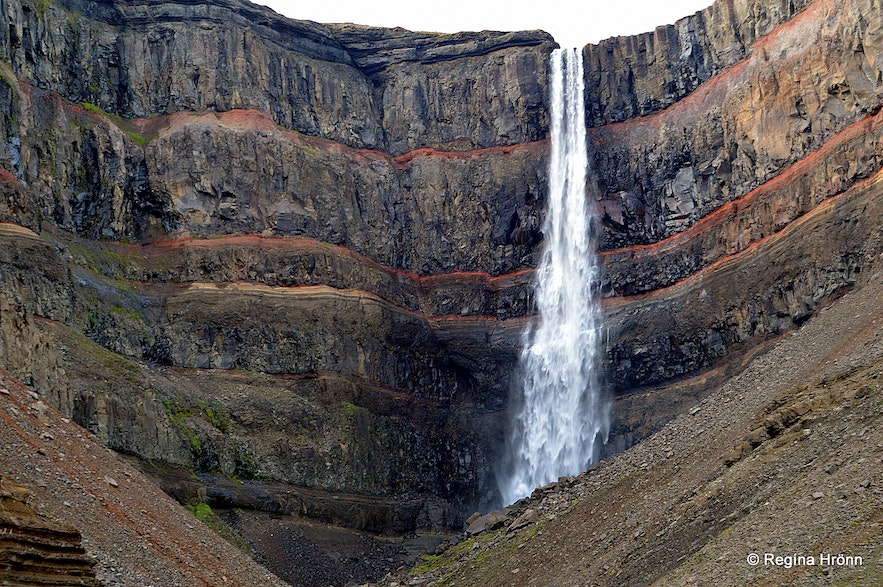 Hengifoss waterfall is in the vicinity of Skriðuklaustur

Here you can see the location of Skriðuklaustur and Snæfellsstofa on the map.