Hellissandur is one of the villages on the north side of the Snæfellsnes peninsula in West Iceland.

It is the first village you will encounter on the peninsula after driving 195 km from the capital city of Reykjavík.

This travel-blog is a side-blog of my 5-part travel-blog series about the interesting Snæfellsnes Peninsula.

Top photo: the entrance to the park 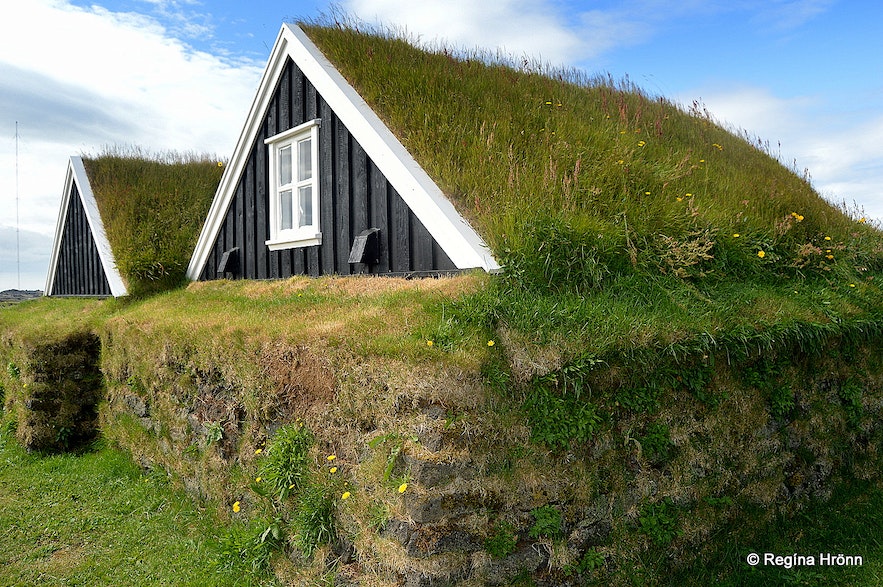 Turf houses at the Fishermen's Garden and Maritime Museum

Hellissandur is one of the oldest fishing villages in Iceland. In the olden times, there was a big fishing centre here, with some 60 seasonal fishermen's huts back in the year 1700.

The population of Hellissandur and the small village next to it, Rif, is now combined approx. 544.

Almost every town and village in Iceland has got a museum of its own. Hellissandur's museum is the lovely Fishermen's Garden and Maritime Museum, which you will see on your right-hand side as you enter the village. 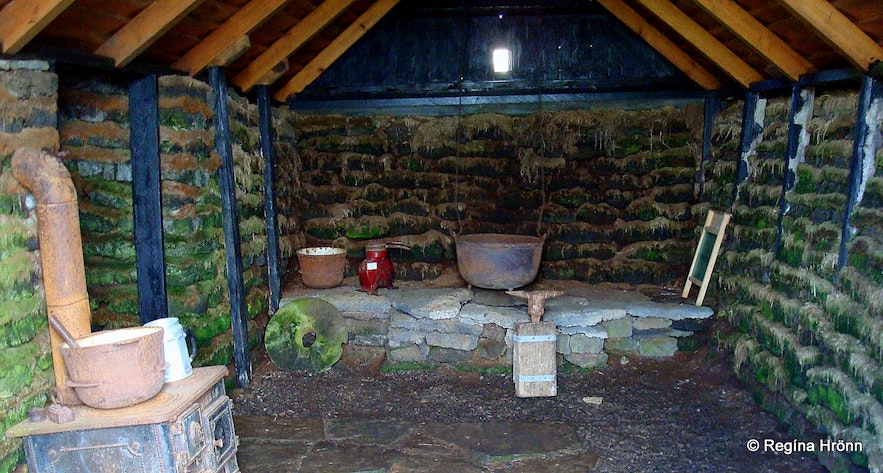 Inside the fishermen's hut

You will see a gate and the sign Sjómannagarður written in Icelandic, meaning the Fishermen's Garden or Fishermen's Park, and inside the park, you will find small turf houses.

But as those of you, who have read my travel-blog, know, then I adore turf houses and have written travel-blogs about almost all the remaining turf houses in Iceland :)

This rebuilt old turf house was the last lived-in fishermen's hut, Þorvaldarbúð - have a look inside during the opening hours for a peek into the living conditions of the fishermen in earlier days. 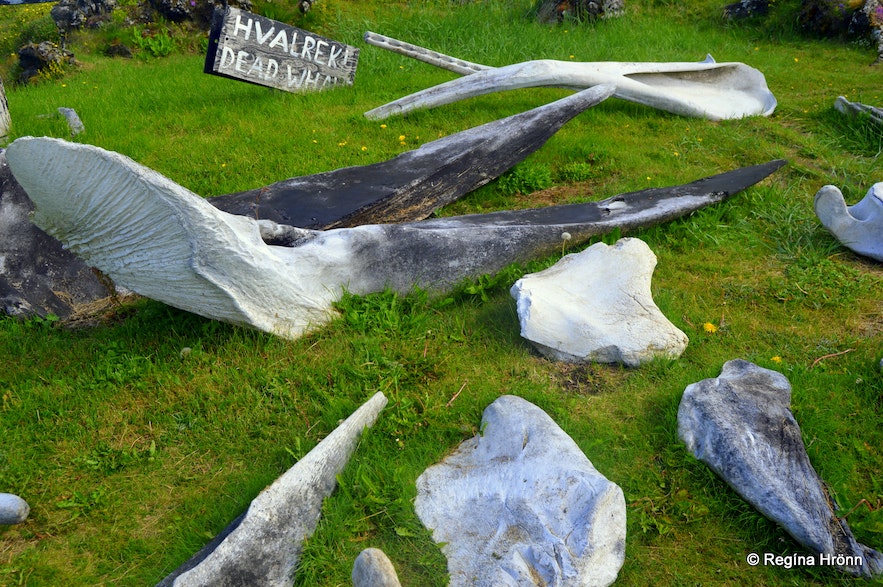 The Fishermen's Garden was established by local fishermen in 1977-78 and depicts the way fishermen lived and worked.

There is both a Maritime Museum and a Fishermen's Park, and you can roam around the outside area free of charge, while there is an entrance fee to the Maritime Museum.

In the Fishermen's Garden, you will find huge whale bones and tools and instruments used by the fishermen in the olden times. The whale bones belonged to a whale that once washed ashore here. 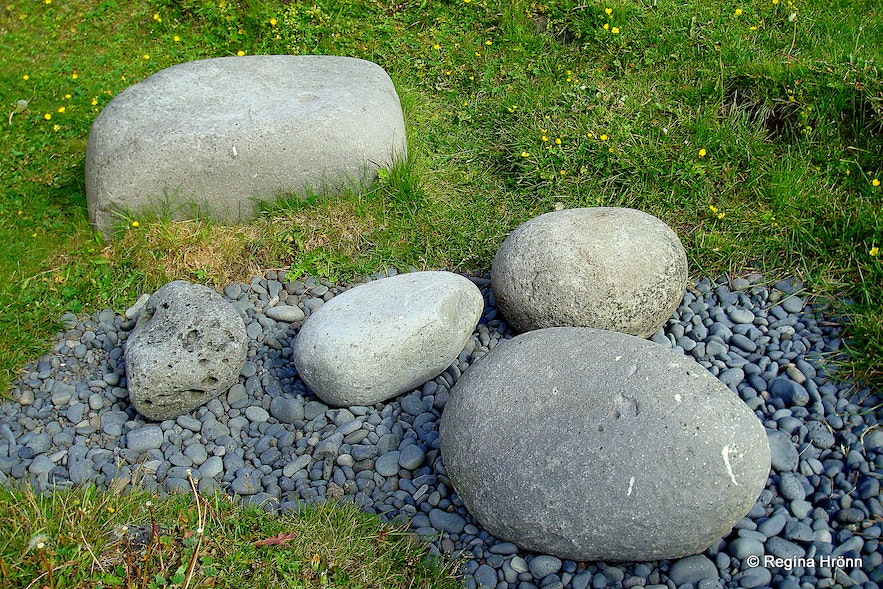 You will also find Steintök - the Lifting stones, which were used to measure the strength of the local men to see if they were strong enough to work at sea.

I showed you such stones in my travel-blogs, the Magical Snæfellsnes peninsula - part II and Djúpalónssandur & Dritvík. These 4 lifting stones weigh from 23 kilos to 154 kilos!

As in all towns and villages in Iceland, which are located by the sea, there is a beautiful statue in remembrance of those many fishermen who lost their life at sea. I always look for such a monument in every village I visit when I travel around my country. 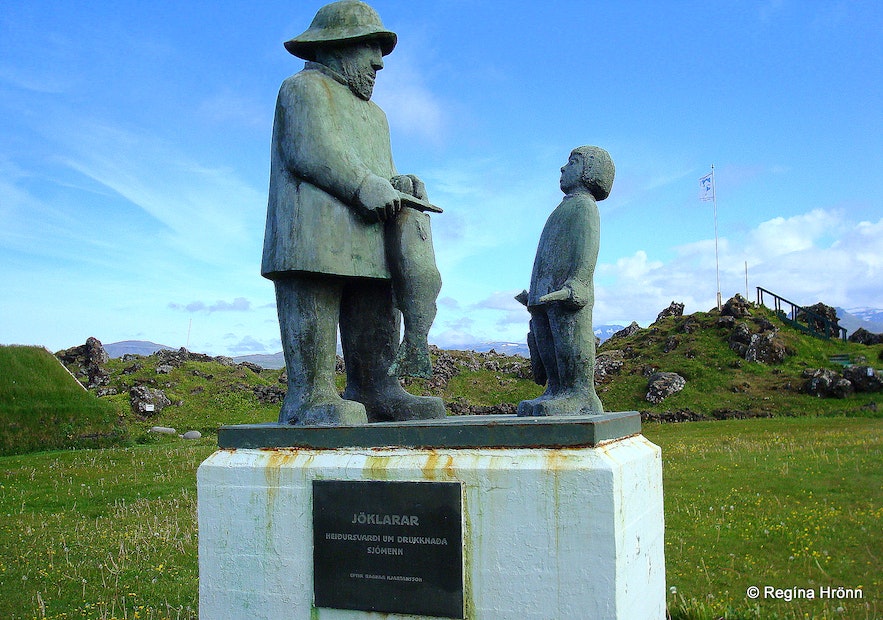 Jöklarar by the artist Ragnar Kjartansson before it got bronzed

And of course, the Fishermen's Garden is a fitting location for such a monument. This plot was given to local fishermen for their annual celebration, and the first thing that was added to the plot was this lovely statue.

The monument is called Jöklarar or the Glacier people by the artist Ragnar Kjartansson, the same artist who created the statue of Bárður Snæfellsás at Arnarstapi. It was unveiled in 1974. In 2018-2019 the artwork, which was getting damaged, got a makeover; it was sent to Germany where it was put in bronze. 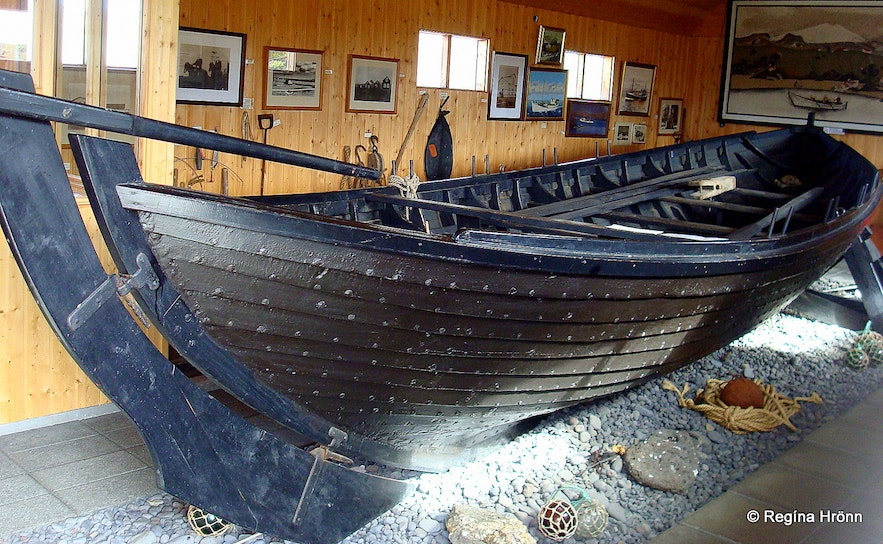 The oldest preserved fishing boat in Iceland, Bliki from 1826

The lifesaving association department Helga Bárðardóttir (remember Bárður Snæfellsás daughter?) owns the statue, which is one of Ragnar Kjartansson's oldest artworks. They contacted me and asked if they could use my photo above (from 2008) to show the damage to the statue.

The statue was sent to Germany where it was put in bronze. You can see photos of the statue here at Sjóminjasafnið á Hellissandi on Facebook.

Inside the Maritime Museum, you will find an eight-oar rowing boat, Bliki, the oldest preserved fishing boat in Iceland, dating back to 1826. It was used by the local fishermen until 1965, but these boats remained the same from the earliest times and into the last century. 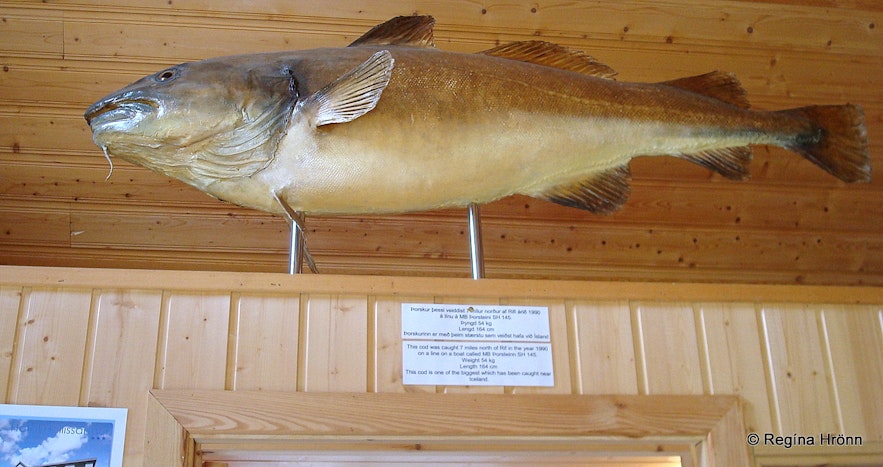 A huge cod mounted on the wall

What caught my attention though was one of the biggest cods caught by Iceland - 54 kilos and 164 cm long! It was caught in 1990, 7 miles north of the village Rif on a line on the boat MB Þorsteinn SH 145.

Hellissandur village and the Fishermen's Garden are located 195 km from Reykjavík, by Útnesvegur road number 574.

To reach this area it is best to rent a car in Reykjavík, and drive up to Snæfellsnes peninsula in a couple of hours.

Here you can see the location of Hellissandur on the map.

Have a lovely time exploring the beautiful Snæfellsnes peninsula :)