On our trip to Melrakkaslétta plain in North-East Iceland, we drove down to Axarfjörður fjord - also called Öxarfjörður, where one can find a lair of the notorious Viking, Grettir the Strong Ásmundarson (born around 996).

Grettir was one of the best-known Vikings in Iceland and his story is told in the Grettis Saga, which was written in the 14th century. 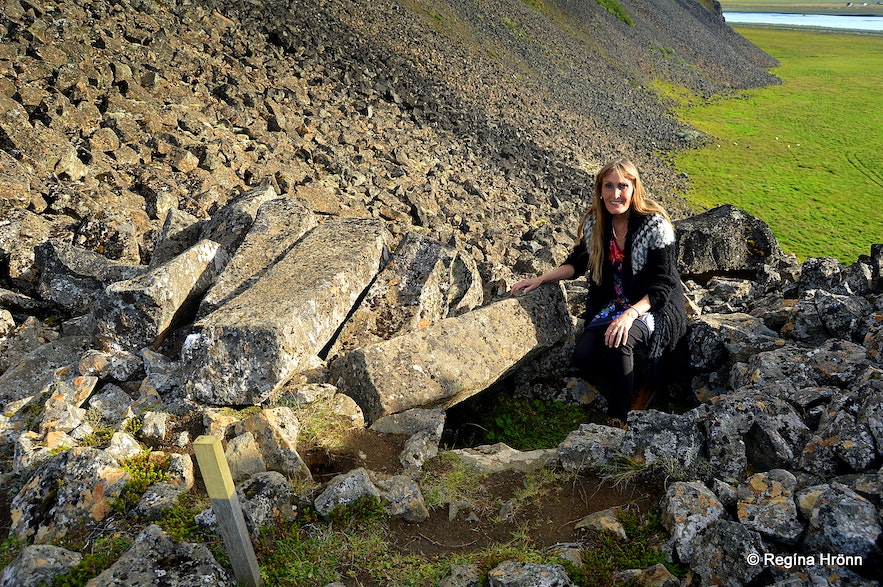 See these huge basalt columns on top of the lair!

Grettir is known for being the longest surviving outlaw in the Viking history of my country - he was an outlaw for almost 20 years!

In Iceland that outlaws would gain their freedom after having been outlaws for 20 years, and when Grettir was killed on Drangey island, he only had a couple of months left to have fulfilled his duty of staying an outlaw for 20 years! 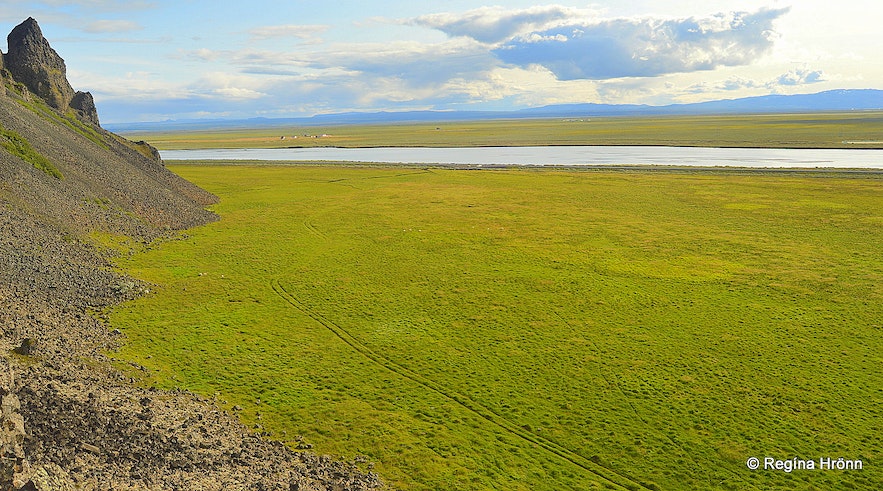 The view from Grettisbæli lair

Grettir the Strong became an outlaw after having been accused of starting a fire where 12 men died, including 2 brothers. Grettir visited the house where these men were staying to ask them to give him some fire.

They mistook him for a troll and attacked him, some of them hit him with firebrands. In the panic, the fire spread. So he was innocent of this crime.

After returning back to Iceland from Norway, Grettir killed Þorbjörn öxnamegin and his son, but Þorgeir had killed Grettir's brother, Atli. For almost 20 years Grettir hid in lairs, which are called Grettisbæli in Iceland, or the Lairs of Grettir; sometimes good people took him in.

See also: Grettir the Strong and the Troll in the Waterfall - a Viking Saga from North-Iceland 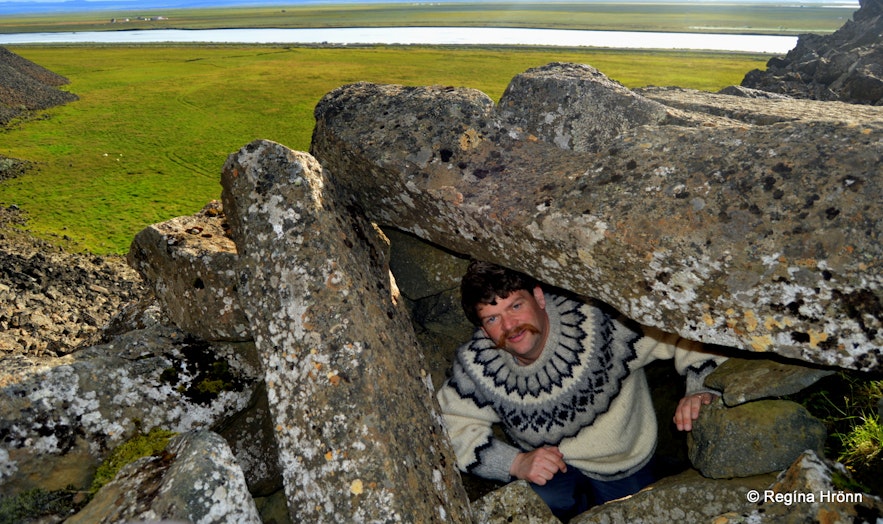 My husband on top of the Grettisbæli lair

One of these lairs is located in the mountain Öxarnúpur, a 146 m mountain, made of basalt columns. It is a massive rock with a lot of scree, making it difficult to mount.

There is a path leading from the parking lot through the land of the farmer and up to the Grettisbæli lair. It takes some 25 minutes to get to the lair and it is a bit steep hike up the mountain.

The lair cannot be seen from below and it isn't until one actually stands on the protruding cliff that it is obvious that this was the lair of Grettir the Strong, his hiding place. 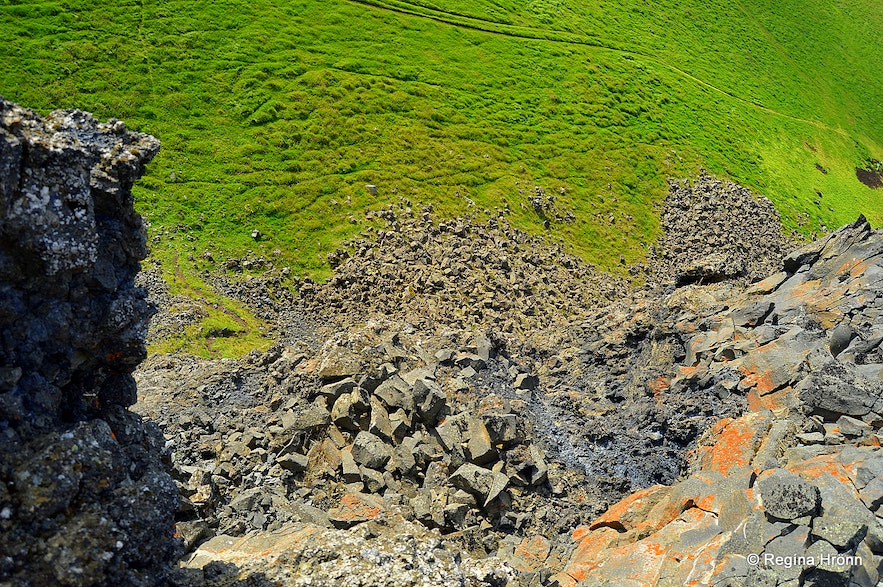 Grettisbæli lair is high up

When we got up on top of the protruding rock there was a small lawn, about the size of a small room. By the end of it, the lair is located. It isn't big, only some 3 meters long with a width and height of 1 meter.

One can crawl into it and peek out from the basalt columns, which create a roof over this stronghold of Grettir the Strong. It must have been well insulated back when it was in use - with moss, hide, and turf. 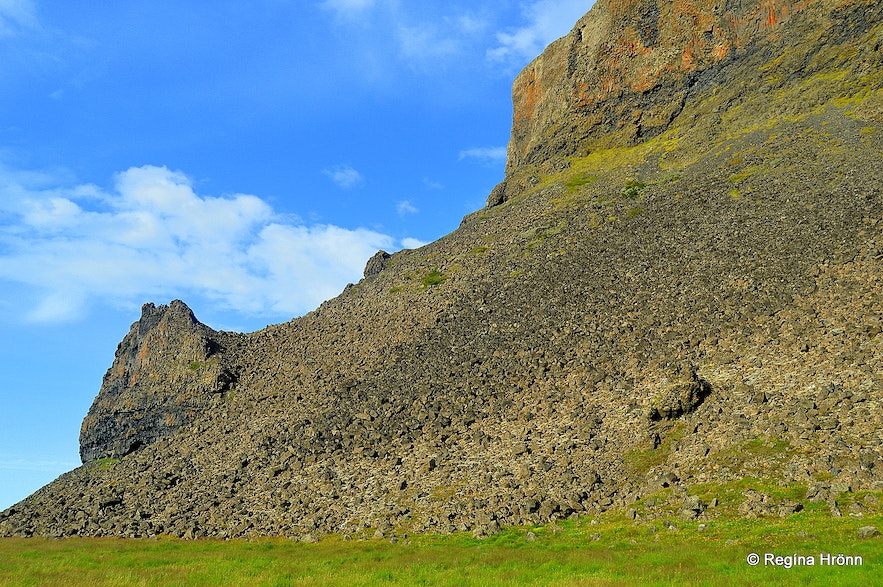 On the way to Grettisbæli lair

Here Grettir was able to hide out and protect himself from his enemies. Looking down from the lair, as can be seen in my photo above, one can see how steep and difficult the climb up to the lair was. From his hiding place, Grettir would have had plenty of rocks to throw at his enemies.

The view from the lair is excellent, but the lair cannot be seen from below, so that would have put Grettir at an advantage point as well. Now a path has been made to the lair from the other side.

Some say that Grettir stayed on this rock for one year, others say that he stayed here for 3 years. It must have been very lonely, cold, and tiresome. 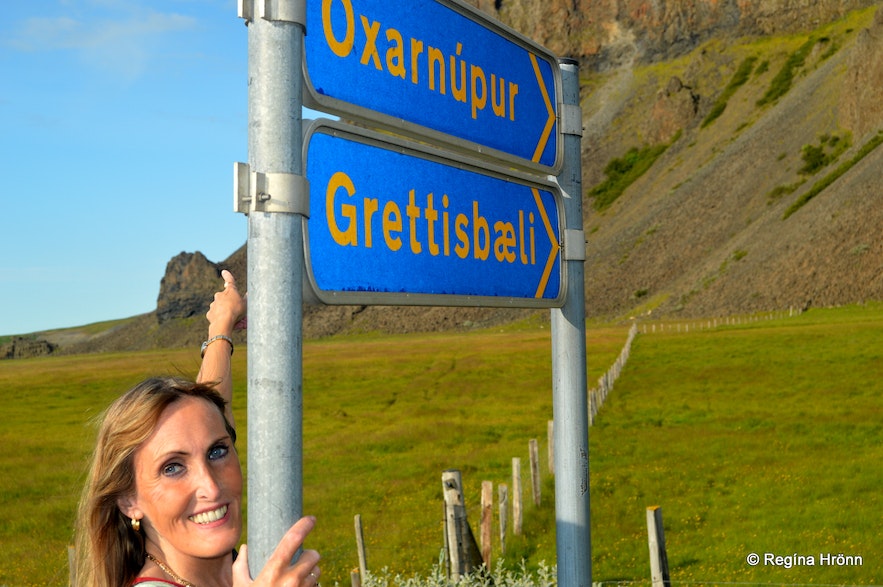 We walked twice up to Grettisbæli, as on our first visit we turned to the right from the parking lot and hiked up a mountain which was really difficult to climb, thinking that up there must be the lair of Grettir.

After having looked for it for quite a while and crawled up and down the scree and further and further up, we decided on this being way too dangerous and headed down again. 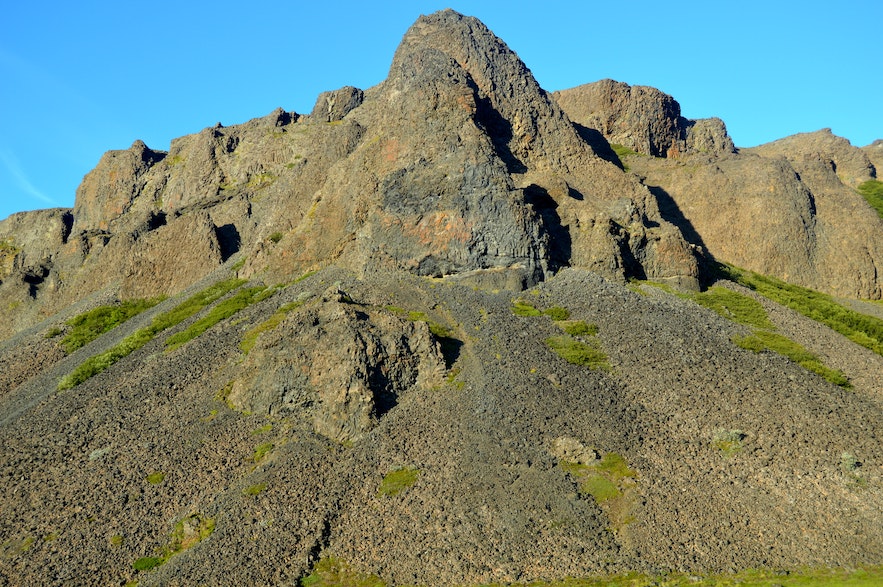 This is not the lair

I think it is awesome being able to visit such an old lair of one of our most notorious Vikings!

Have a lovely time in northeast Iceland :)