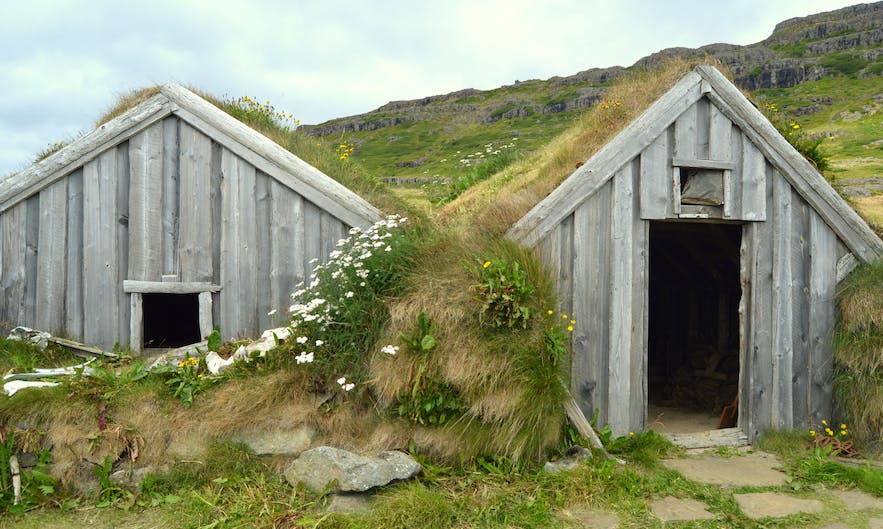 In the remote Strandir area in the Westfjords of Iceland, the mystical Kotbýli kuklarans - the Sorcerer's Cottage awaits you. It represents both the habitation and living conditions of a sorcerer, but also the normal living conditions of tenant farmers in the 17th century.

The Sorcerer's Cottage, located at Klúka in Bjarnarfjörður, north of Hólmavík village, can be visited in the summertime.

In my travel-blog about the Museum of Icelandic Witchcraft and Sorcery in Hólmavík village, I told you about my visit to the sorcery museum.  My visit was in April, which is still winter time in Iceland, so I couldn't drive up to Bjarnarfjörður to visit the Sorcerer's Cottage, but the following summer I popped up to this sorcery area of the Westfjords and checked it out.

Kotbýli kuklarans - the Sorcerer's Cottage was first opened on the 23rd of July 2005 and is the second exhibition of the Galdrasýning á Ströndum, but the first exhibition, the Museum of Icelandic Witchcraft and Sorcery opened in the year 2000 in Hólmavík.

The Sorcerer's Cottage consists of 3 connected turf houses made of turf (sod), rocks and driftwood according to age-old methods. Driftwood is one of the main resources in this remote area of the Westfjords and was used here as a building material for the turf houses to a much greater extent than in other parts of Iceland.

A plea was made to Icelanders for things to use in the Sorcerer's Cottage, f.ex. hides, lambskin, scythe-handle, rakes and all kinds of tools used in the turf houses in the olden times. 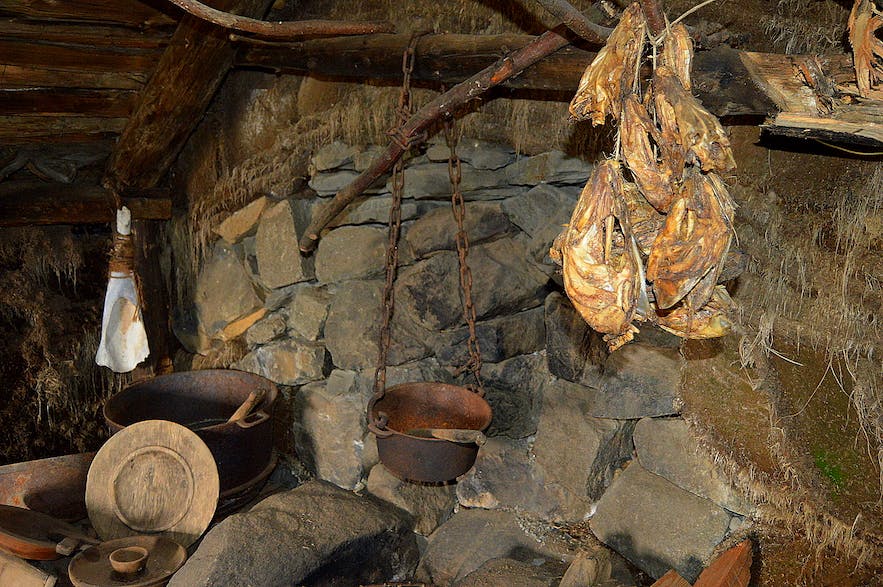 At the Sorcerer's Cottage, you will get an insight into the mindset of the Icelandic commoners during the witch hunt in Iceland, and learn about the methods they used to try to lift the burdens and struggles of their daily life.

The kind of magic they used was harmless and could have been something like using simple magic for making your cow milk better or your grass grow better, or your tools more efficient - something to make your daily life easier on this harsh island. 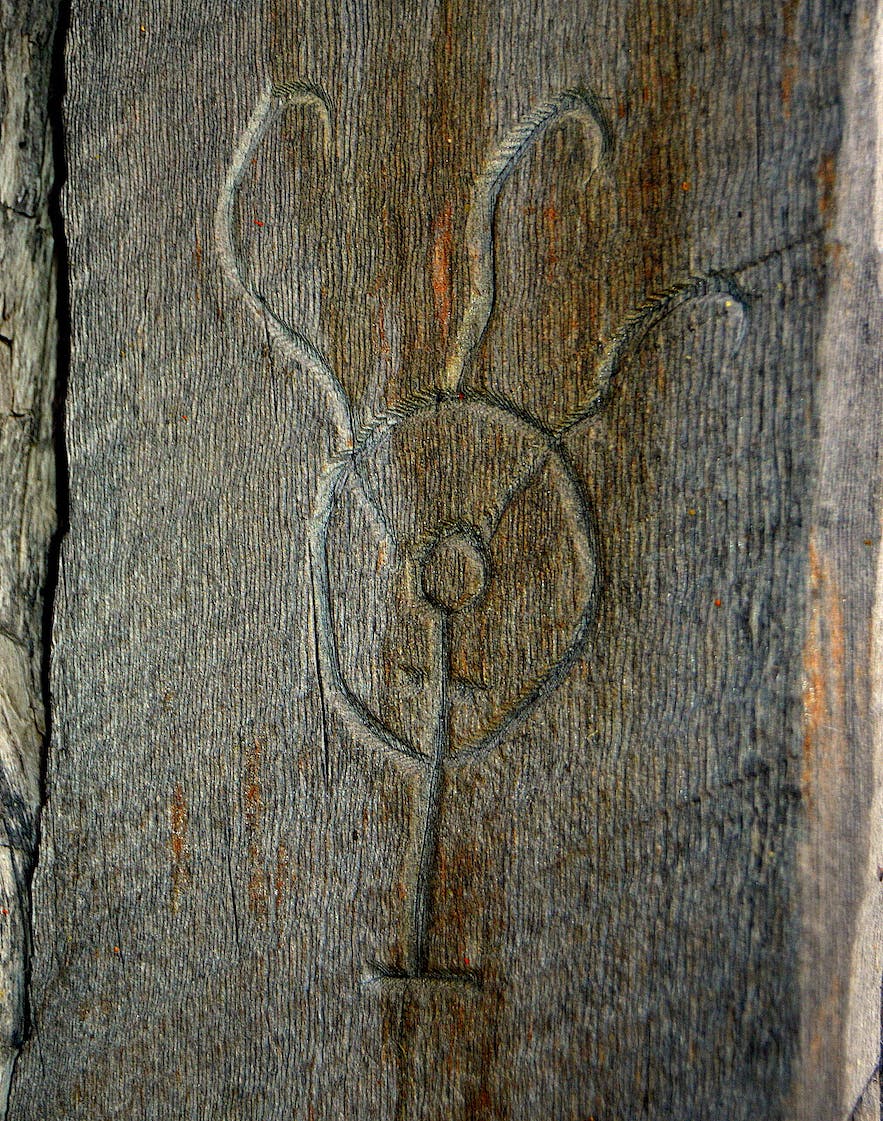 Inside the Sorcerer's Cottage, you will notice many strange signs in several places, f.ex. on the wood of the bed as you can see in my photo below.  These strange signs are called galdrastafir - magical staves or magical signs and were used by some common Icelanders during the witch hunt, for protection against evil spirits, fox-bites etc.   Some of the signs were used for the healing of illnesses or to make sheep tame.

These signs may be linked to the old knowledge of the Viking runes and religion mixed with Catholic superstition, and it seems to have been tempting to use these magical signs when faced with difficulties - despite the fact that these poor people could have been faced with prosecution for sorcery.

In 1/3 of the witchcraft accusations here in Iceland such magic signs or grimoire (magic book) were mentioned.

The emblem of the Strandir area in the Westfjords of Iceland is Ægishjálmur - the Helmet of Awe - due to its connection to sorcerers.  I haven't got a photo of that sign, which I think is the most magnificent of all the signs I have seen, but if you click on the link above, you will see what it looks like. 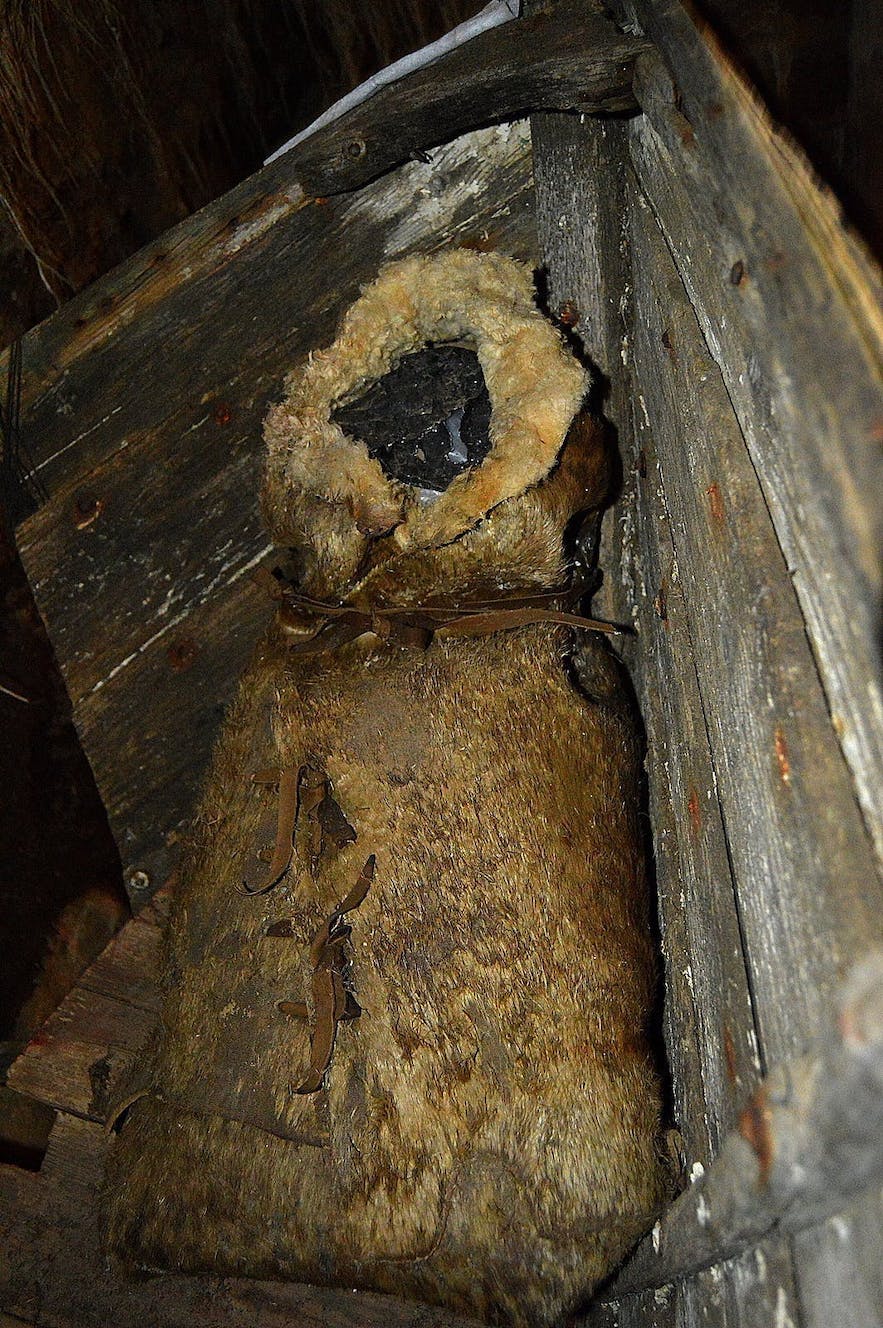 Svanur was the son of Björn and Ljúfa (Sweetie), who according to Landnáma - the Book of Settlement, were the settlers of Bjarnarfjörður. Svanur, who was a known sorcerer and the Saga describes him as having been a very difficult person to handle, settled here at Svanshóll. He gave shelter to the foster-father of his niece, Hallgerður langbrók, - Þjóstólfur - after he had killed Hallgerður's first husband, Þorvaldur, but Þorvaldur had slapped Hallgerður so hard across the face that he had drawn blood.

After the murder, Hallgerður langbrók sent Þjóstólfur to her mother's brother, Svanur, where he could seek shelter.  When Ósvífur, Þorvaldur's father, and his men, went to revenge him and seek Þjóstólfur, the fetches of Ósvífur approached Svanur (fetches are regarded as a common thing in Iceland, even nowadays, and I have often noticed them RHR). Svanur asked Þjóstólfur to follow him to Bjarnarfjarðarháls and wrapped goatskin around his head and uttered: 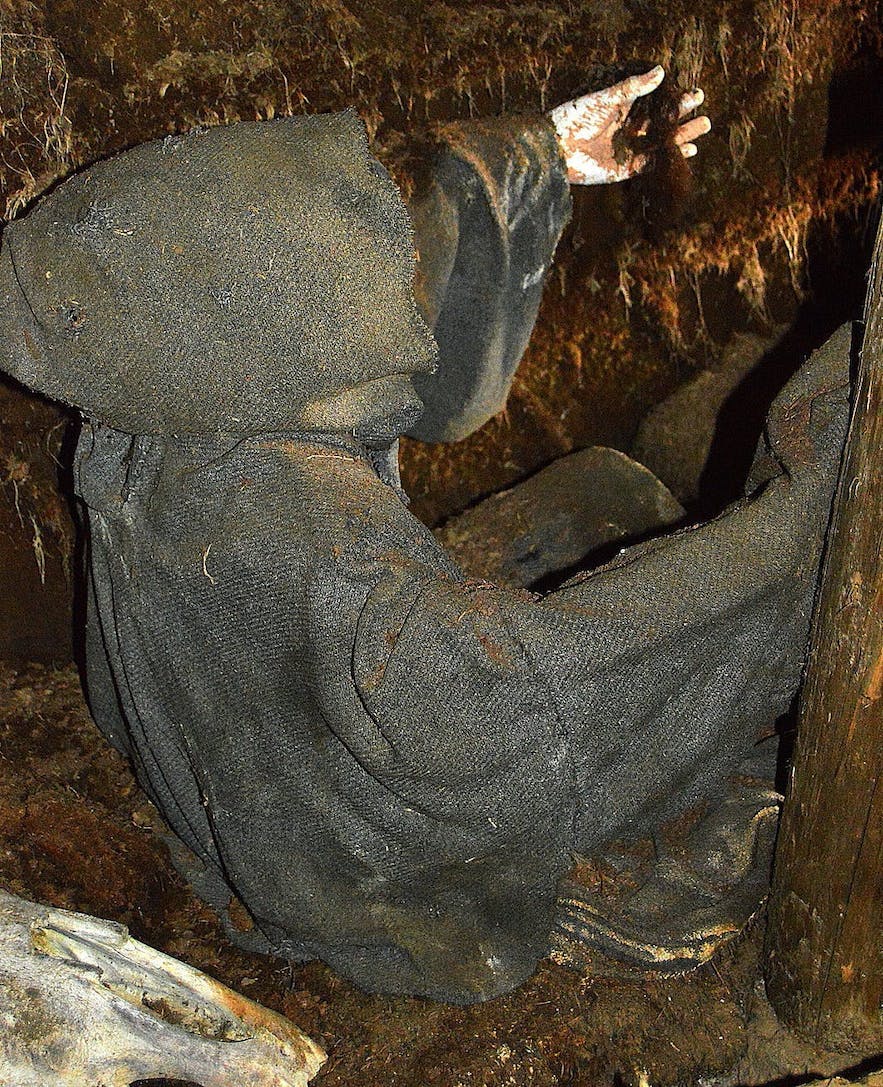 "Let there be mist and fog,
let there be fright
and wonders to all those
who seek you."

The sorcerer Svanur conjured up a thick fog in Bjarnarfjörður at Bjarnarfjarðarháls. The men tried to cross, but the thick fog made them fall off their horses and lose them, and some of the men walked into the swamp and others into the wood and they even lost their weapons in the thick fog.

Ósvífur thought of retreating if only they could find their horses and weapon. The fog lifted enough for them to find their belongings and the men then retreated. But Ósvífur's men wanted to try again to cross, but the same happened.

The same thing happened 3 times and the men finally retreated and Ósvífur sought compensation for his son at Höskuldsstaðir farm where Hallgerður's father, Höskuldur, lived. Höskuldur paid compensation in silver and settled this case once and for all. 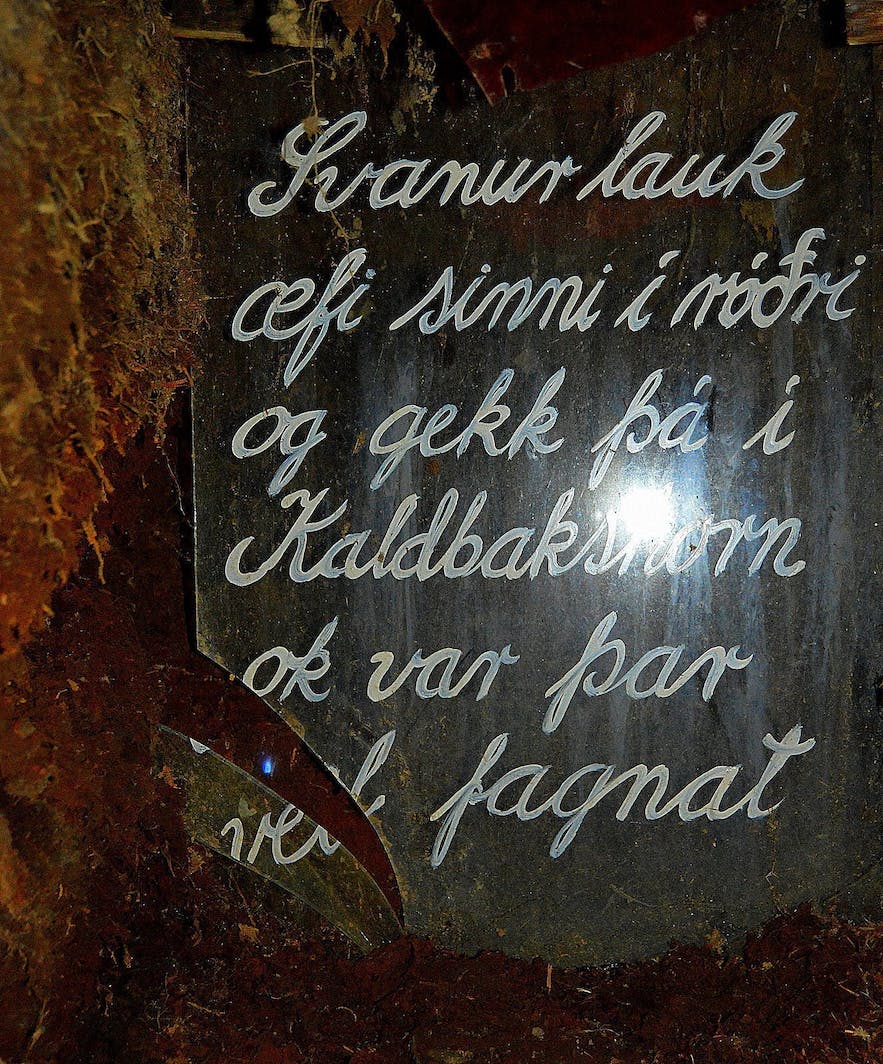 It is said that the sorcerer Svanur walked into the gorge above the Svanhóll farm and exited in Kaldbaksvík cove on the northern side of the mountain range where he went fishing. Svanur ended his life on the boat and fishermen in Kaldbaksvík cove said he had disappeared into Svansgjá gorge in Kaldbakshorn after his death, where he is said to have been greeted warmly.

Sigurður Atlason, the CEO of Strandagaldur did a great job in recreating a mystical turf house of a sorcerer at Strandir, with good professional help. Sigurður called the Sorcerer's Cottage a set to show people how the commoners lived.

Remember Sigurður from my travel-blog on the Icelandic Museum of Witchcraft and Sorcery; he is the one with whom I am lying on the floor of the museum in Hólmavík - checking out the zombie ;) Sadly Sigurður died suddenly in November 2018. He was such a great man and will be missed. 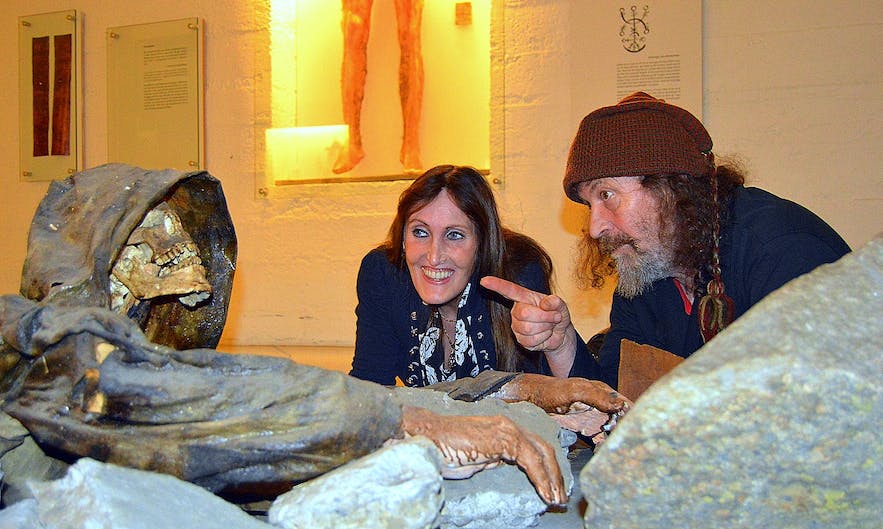 Sigurður allowed me to use the photo below of the sorcerer, shot by Ágúst G. Atlason, photographer.

If you were not lucky enough to meet the sorcerer during your visit and have your picture taken with him, then you can always have your Viking and Sorcery portrait taken at Mink in Reykjavík :) 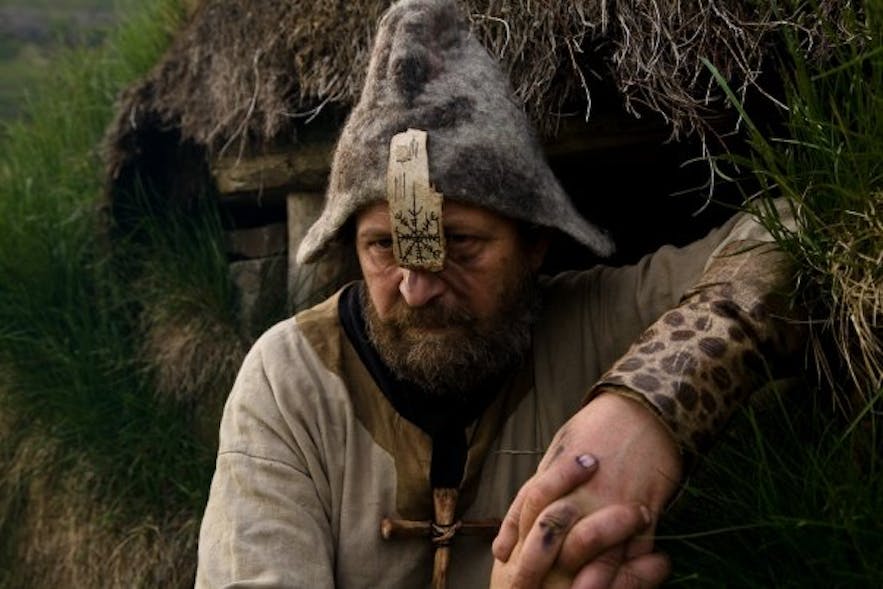 Both these sorcery exhibitions depict the history of sorcery, which was seemingly very powerful in this area of Strandir. In Trékyllisvík at Strandir, 3 men were burnt at the stake for sorcery in 1654 and then the witch craze started for real.

The first man thought to have been burnt at the stake though as a sorcerer was Jón Rögnvaldsson, who was burnt in 1652 in Svarfaðardalur in Eyjafjörður in North-Iceland. Jón Rögnvaldsson was charged with raising a ghost (zombie) to cause harm to his enemy.

This period of time in Iceland, from 1654-1690, has been called Brennuöldin or the Fire century.  Another 16 men and 1 woman were burnt at the stake, the last one in 1683, again in the Westfjords.

Written history tells of two witchcraft trials related to Bjarnarfjörður and many of the inhabitants in this fjord were connected to the last man to be sentenced to death for sorcery in Iceland in the year 1690, Klemus Bjarnason. He was pardoned by the Danish King and saved from the fire and sentenced to exile instead. 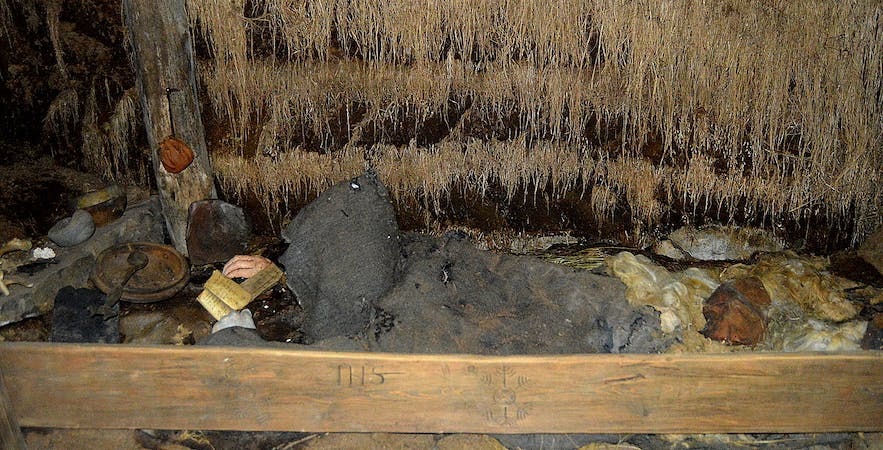 You will find the Sorcerer's Cottage at Klúka in Bjarnarfjörður next to Hotel Laugarhóll. This is a really interesting area as here you will also find a swimming pool and natural hot springs, one of which is the preserved hot spring of Guðmundur the good, who was a bishop at Hólar. I tell you about the hot springs in my next travel-blog.

The opening hours for the Sorcerer's Cottage or Kotbýli kuklarans, as it is called in Icelandic, are: in the summertime every day from the 15th of June until the 31st of August from 12 noon until 6 pm.

Please note that this location is only accessible in summer, whereas the Sorcery and Witchcraft Museum at Hólmavík is open all year round. To reach Strandir you can rent a car in Reykjavík and drive up to this area in a day.

Have a lovely time in the Strandir area :)