I have been showing you NE-Iceland in my last trave-blogs. After a 7-km hike on Rauðanes cape in North-East Iceland, I visited a lovely little study centre in the vicinity, in Þistilfjörður bay. It is a new study centre on a unique breed of Icelandic sheep, which serve as the leaders of the horde.

These sheep can only be found in Iceland. 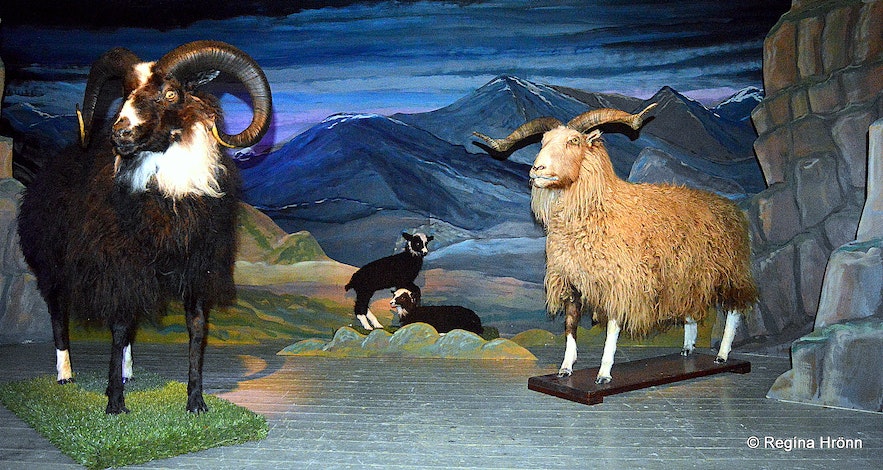 The Study Centre, Fræðasetur um forystufé in Icelandic, opened in 2014. I know the name is a mouthful, but it means the Study Centre on Leader-wethers/leader sheep.  I had read about this type of sheep and have held it in the highest regard, and was thus eager to visit the Study Centre to learn more about this intelligent sheep.

The Icelandic sheep are descendants of the settlement sheep which the settlers brought with them to Iceland back in the 9th and 10th century. In the summertime our sheep roam free here in Iceland, they are independent and lack the horde mentality. 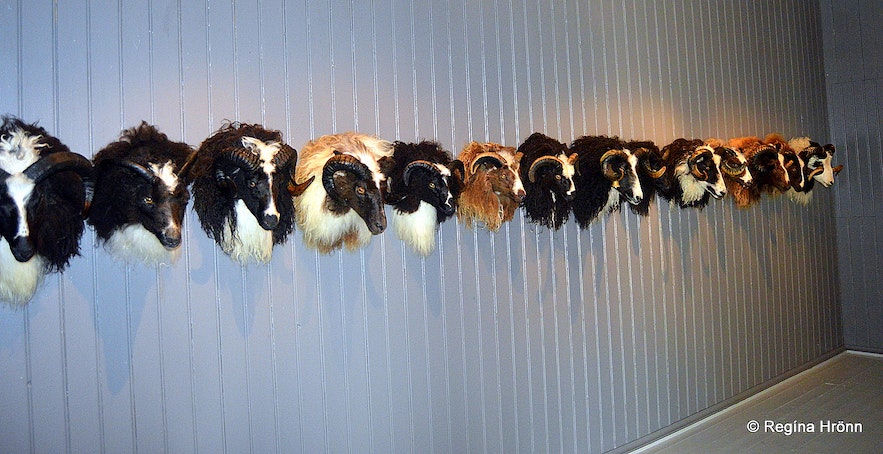 This special breed of sheep here in Iceland, the leader-wethers, serve as the leaders of the horde and are very intelligent and courageous. They control the pace of the horde and care for it and have great leadership and initiative.

And another extraordinary thing about the leader-wethers is that they can predict the weather. They have been known to lead their horde to safety through blizzards, fog and all kinds of bad weather.

Why this type of sheep is only to be found in Iceland and nowhere else in the world might be due to the extreme weather changes in Iceland. This type of ability to lead the horde through difficulties must have developed in some sheep out of necessity.

The Study Centre on Leader-sheep in North-East Iceland

It is an amazing ability - to be able to predict the weather. I can tell you that I have always had the greatest respect for the leader-wethers and am happy that a Study Centre on this amazing sheep has been opened.

The leader-wethers have been much cherished here in Iceland through the centuries and have been deemed more valuable than the ordinary sheep. There are many stories about the leader-wethers and an excellent book has been written on their extraordinary leadership, Forystufé. I have a copy on my bookshelf and read it often. 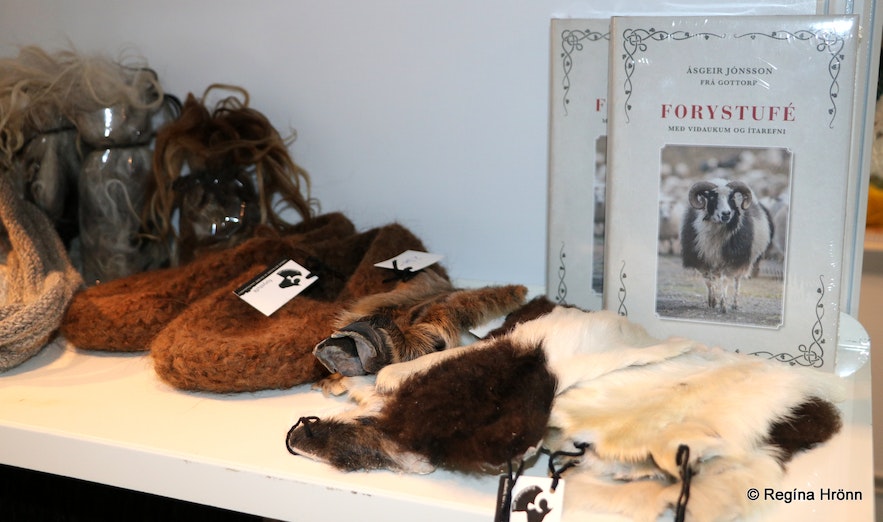 Many of the stories deal with the leader-wethers not wanting to leave the sheep-cote, even if the door is open and the other sheep are out and running. Then these extraordinary sheep sense that the weather is going to change and a storm is approaching. So the farmers learnt to trust the abilities of the leader-wethers.

The leader-wethers have saved many a horde and people from dying in blizzards. One story tells us about the black leader-wether, Svínavatns Svartur, which back in 1884 saved its horde and a big group of searchers from a blizzard.  It walked in front of the horde for hours facing the blizzard and only returned to the horde when the ice on its face was so thick that it couldn't see anymore.

The searchers helped the leader-wether by breaking the ice off its face and it then continued leading them to safety. 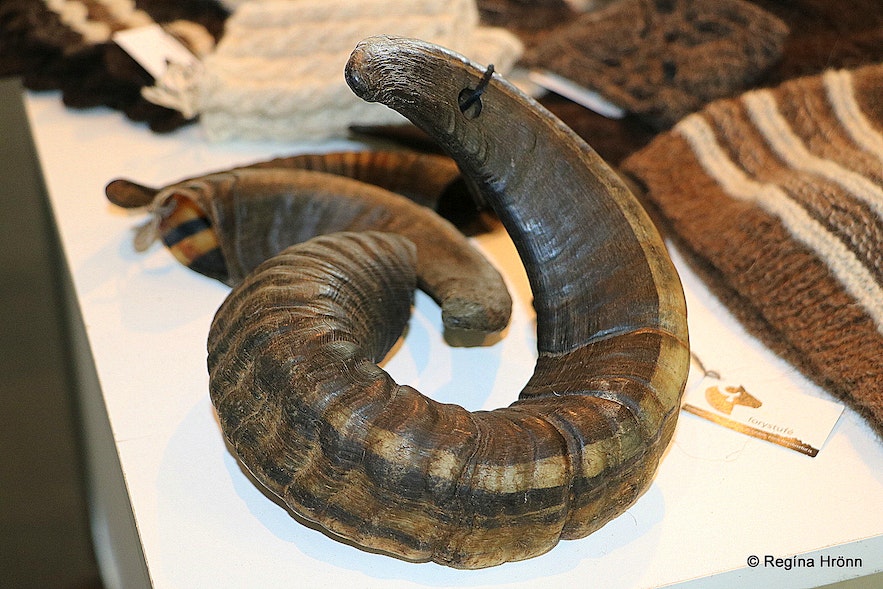 What absolute heroes these leader-wethers are!

The best-known leader-wether in Iceland is Eitill, the leader-wether of Fjalla-Bensi, but you can read about it in the popular book Aðventa or the Good Shepherd, which was written by the noted Icelandic author Gunnar Gunnarsson. This book was first published in Leipzig and has since been translated into 10 languages.

On one of my travels in the highlands of Iceland, I came across this turf and stone hut,  but Fjalla-Bensi - Bensi of the Mountains - and the leader-wether Eitill had to seek shelter during a major storm at advent time back in 1925 in a shelter similar to this one.

By Tumbi in the highland

The leader-wethers can often be spotted in a group as they tend to be taller and leaner than other sheep. They have a long neck and tall feet and the majority of them is horned. 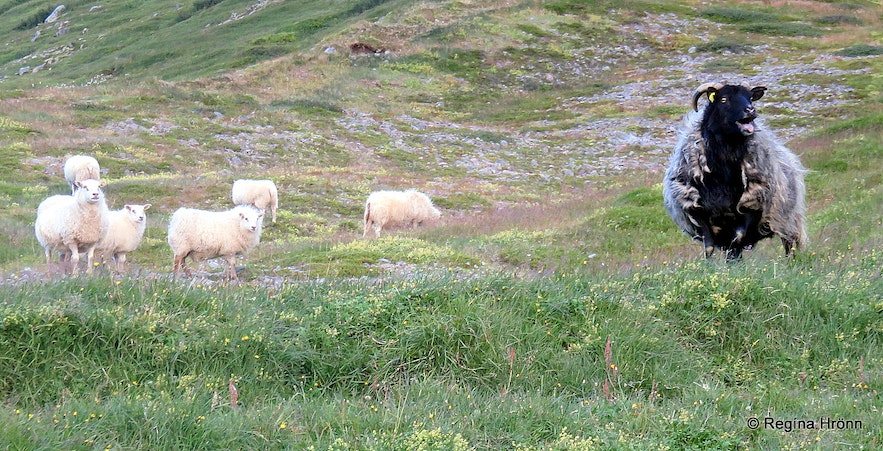 On my travels in Iceland I have only once come across a leader-ewe - I was hiking towards Drangajökull glacier on the northern part of the Westfjords, and on my way back from the glacier I noticed an odd-looking sheep, it was black with white wool, which looked like a blanket on the sheep's back.

I zoomed in on it to get a better look and immediately realised that it must be a leader-wether. 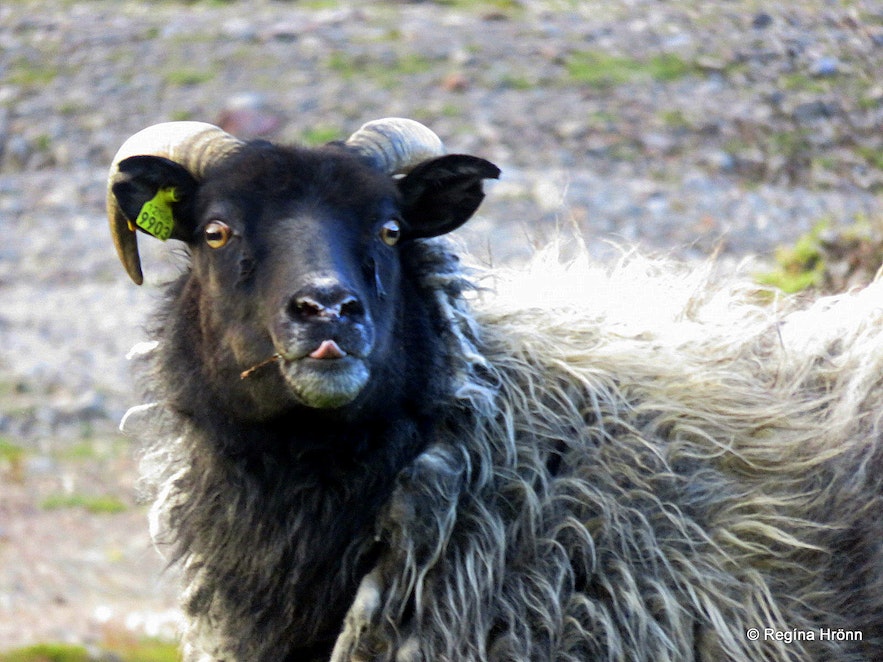 I turned out to be right as this odd sheep started driving the other white sheep away into safety (from me and my husband) and then turned towards us and glared at us. It looked so proud and I took many photos of it - until it started bleating at us - almost like telling us to be on our way or else we had it to answer to!

This leader-wether, which the owner of the Study Centre of Leader-wethers told me, later on, was a leader-ewe, bleated until my husband has disappeared, I stayed behind to take photos. The leader-ewe seemed to be more concerned about my husband than me, but it stood still until I had left.

Then it turned towards the other sheep and informed them that the danger was over. When I looked back for the last time I saw this proud and majestic leader-ewe standing tall with Drangajökull glacier in the backdrop. It was such a beautiful sight.

The leader-wethers are easily spooked and will run away from a human being until they are cornered. Then they become calm, unlike other sheep which will try to run away even if they are cornered or held by their horns.

This leader-ewe was not backing away from the opposition. One has to admire such beautiful animals. 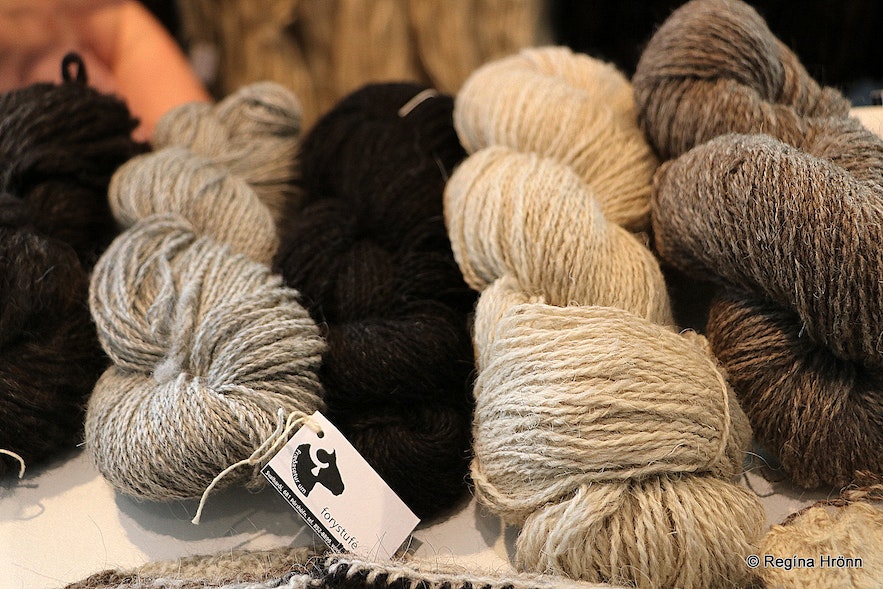 At the Study Centre on Leader-wethers, one can buy all kinds of sheep related stuff, f.ex. hides, silver earrings in the shape of ram testicles and bones, T-shirts with leader-wethers (I want one) and woollen goods. The wool of the leader-wether is different from the wool of an ordinary sheep as it is softer.

I regret not buying something at the Study Centre. When I visited I was thinking that I don't need anything, but next time I will buy some woollen socks for sure. And some jewellery. 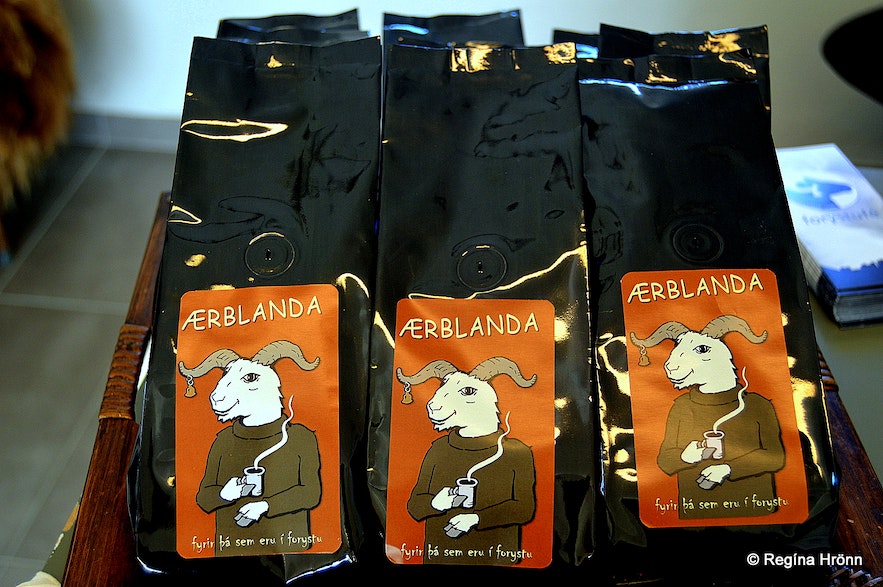 There is a lovely little coffee house, Sillukaffi, at the Study Centre on Leader-wethers and a special blended leader-wether coffee Ærblanda for sale. I tried it and it is strong and flavoursome coffee.

The Study Centre on Leader-wethers is open for 2 months a year, from the 29th of June until the 31st of August from 11:00-18:00. The proprietor, principal Daníel Hansen, is very informative and friendly.

Do pay him a visit if you are travelling in the North-East part of Iceland. 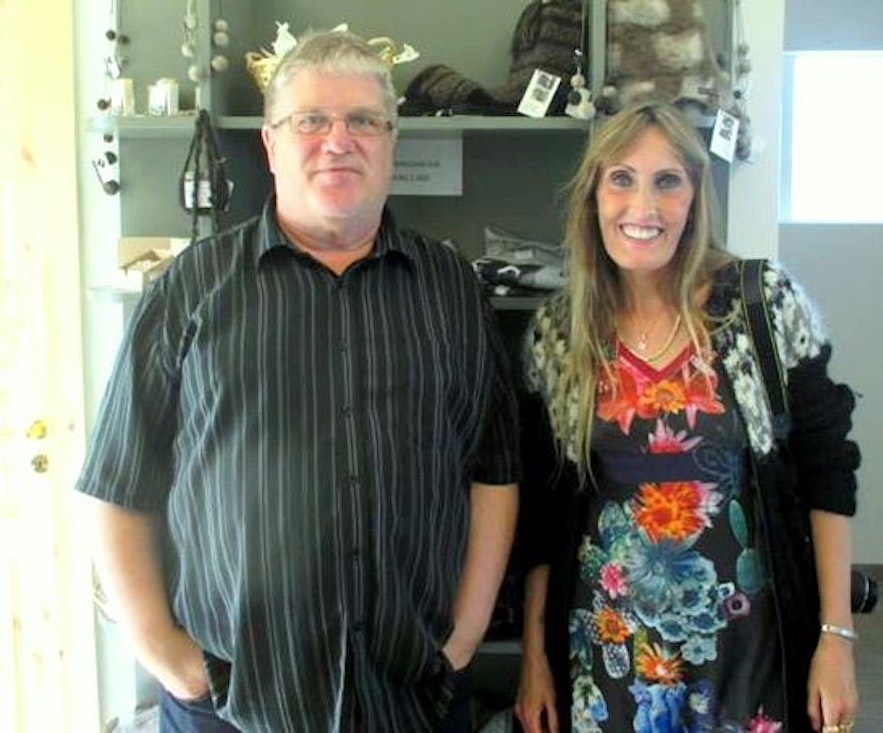 Now, incidentally, I met Daníel again in 2017 in Reykjavík, where both of us took part in the annual Handverk og hönnun - the Icelandic Crafts and Design fair at City Hall, where Icelanders from all over the country come together and sell their unique products.

Daníel had been invited all the way from North-East-Iceland to introduce the products of leader sheep to us. With us in the photo is the woodcarver and former fisherman Sigurður Petersen, who also had a booth at the fair. 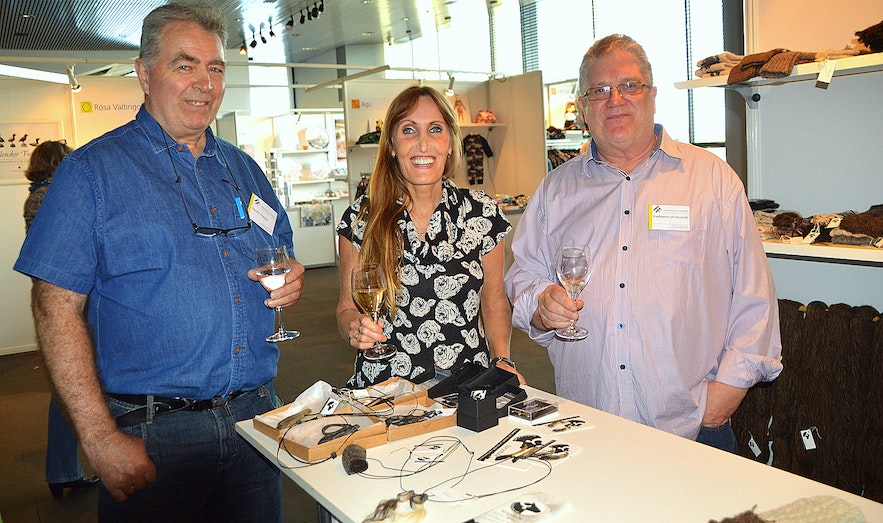 With Sigurður and Daníel at City Hall in Reykjavík

The Study Centre is located at Svalbarði by road 85 midway between the villages Þórshöfn and Raufarhöfn, only a couple of km away from the beautiful Rauðanes cape.

Turn off road 85 unto road 897 and drive for a short distance and a farm will be on your right-hand side. The Study Centre is located in a yellow building.

To reach the East-Fjords of Iceland you can rent a car in Reykjavík and drive up there in a couple of days. Once you have reached the East-Fjords there is a myriad of activities and tours to join:

By now we had completed our journey to the North-East part of Iceland and headed towards the spectacular Jökulsárgljúfur canyon and Mývatn where we stayed for 4 days.