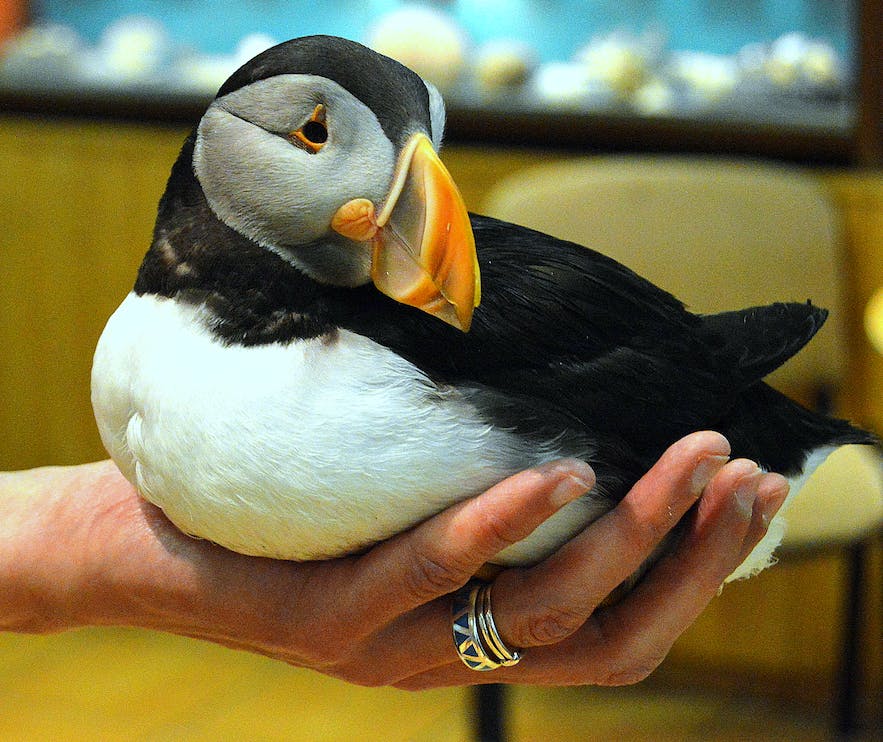 I have written several travel-blogs on the volcanic Vestmannaeyjar - the Westman islands and now I want to tell you about a lovely museum, which in my opinion is a must visit. This museum is called Sæheimar aquarium or the Aquarium and Museum of Natural History of Vestmannaeyjar - the first of its kind in Iceland, established back in 1964.

At Sæheimar you will find 3 exhibitions; the bird exhibition, the mineral exhibition and the 12 large fish tanks (the aquarium). 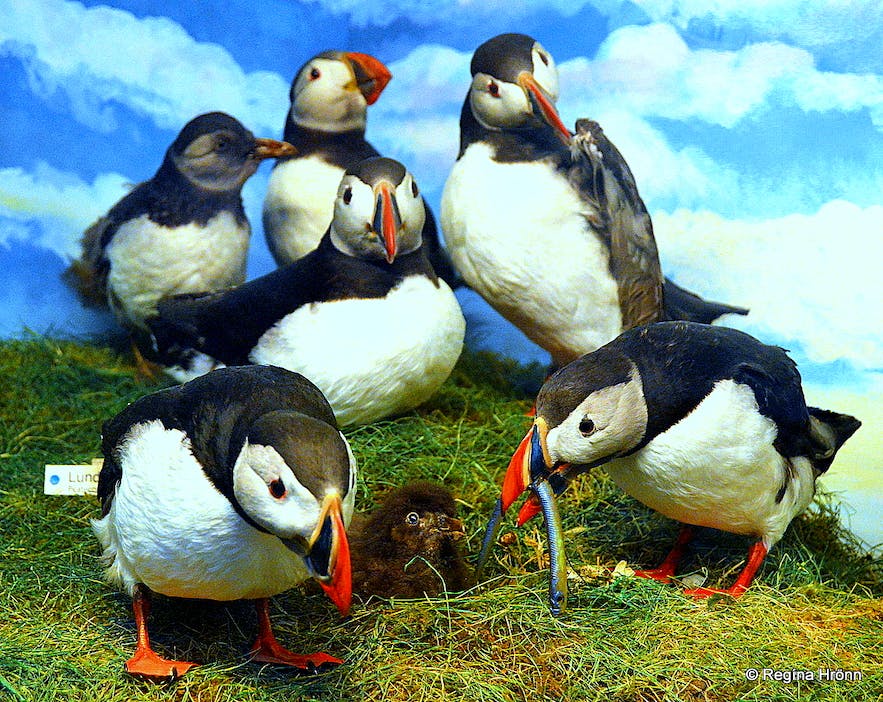 Stuffed puffins behind glass, very difficult to take a decent photo. See the puffling in the middle :)

At the museum, you can see a great variety of Icelandic birds, both migratory birds, and the others, which stay permanently in Iceland and endure the dark and cold Icelandic winter with us Icelanders. There are some vagrant birds as well on exhibit and I was surprised to see a bat! I hope I never get to meet a live bat in Iceland!

At Sæheimar you can learn all about the most popular bird in Iceland - the puffin - and even get to meet a live puffin up close and personal!

There is a good exhibition of various lava rocks and minerals at Sæheimar with samples of almost every mineral in Iceland. I love such exhibitions and always seek them out where ever I travel, be it in Iceland or in other countries I visit. 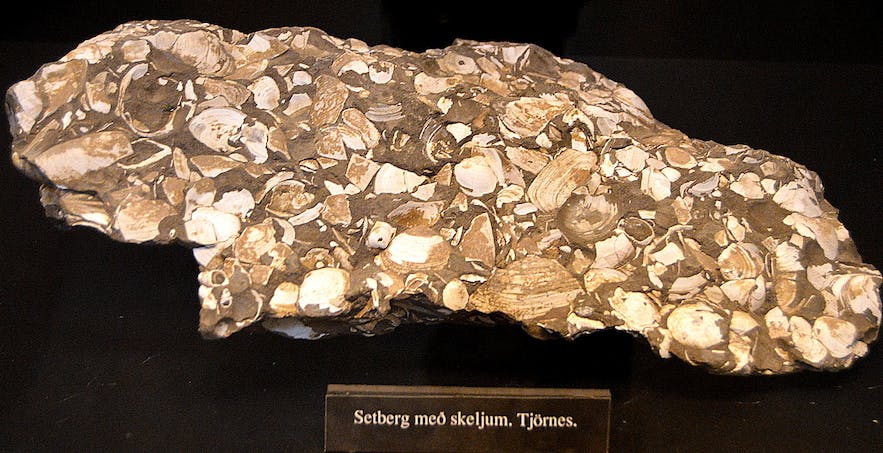 Well, I also love natural history museums, so Sæheimar was right up my alley :) In my photo below you can see a sedimentary rock with shells from the Tjörnes peninsula in North-Iceland, which is well known for its fossilized shells.

There are 12 large fish tanks at Sæheimar, which is why this museum is called an aquarium as that is the way it started out. In the tanks, you will see various types of fish from the North Atlantic ocean along with some rarer fish species. In one tank I even saw a replica of a submarine volcanic eruption!

On the website of Sæheimar, you can read about what happened to the fish in the fish tanks during the volcanic eruption in the Westman Islands, which started on the 23rd of January in 1973.

Life catfish in a fish tank

The curator stayed behind determined to release the fish and sea creatures into the sea if the lava would reach the aquarium. The lava, fortunately, didn't reach the aquarium, but in March 1973 the lava flow covered the electric company's generator building - cutting off electricity to the fish tanks!

The fire department of the Westman islands immediately put up a transportable generator that they connected to the fish tanks. 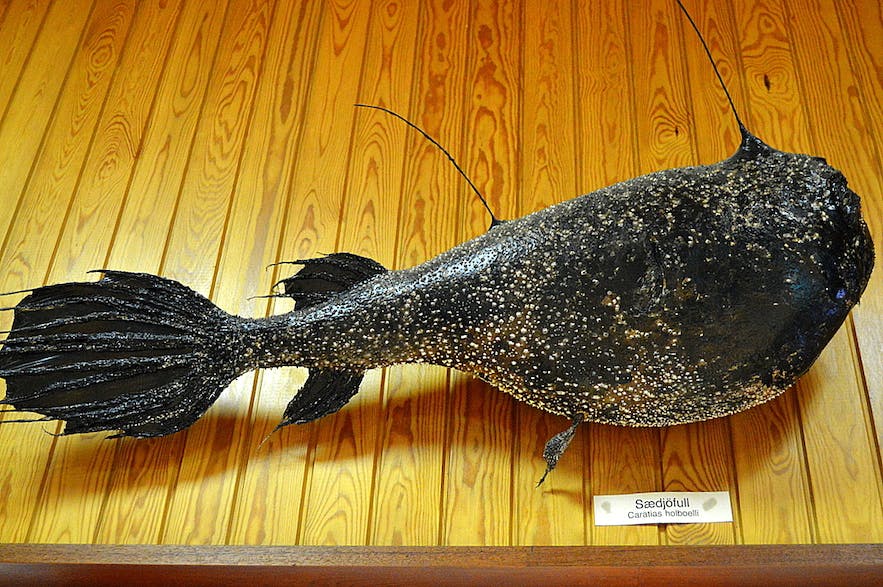 I love this story as it shows how fond the islanders are of their aquarium and how they help each other out in a time of emergency.

The local fishermen also supply the aquarium with new and interesting specimens when they catch something out of the ordinary, like the sea devil (sædjöfull) in my photo above. 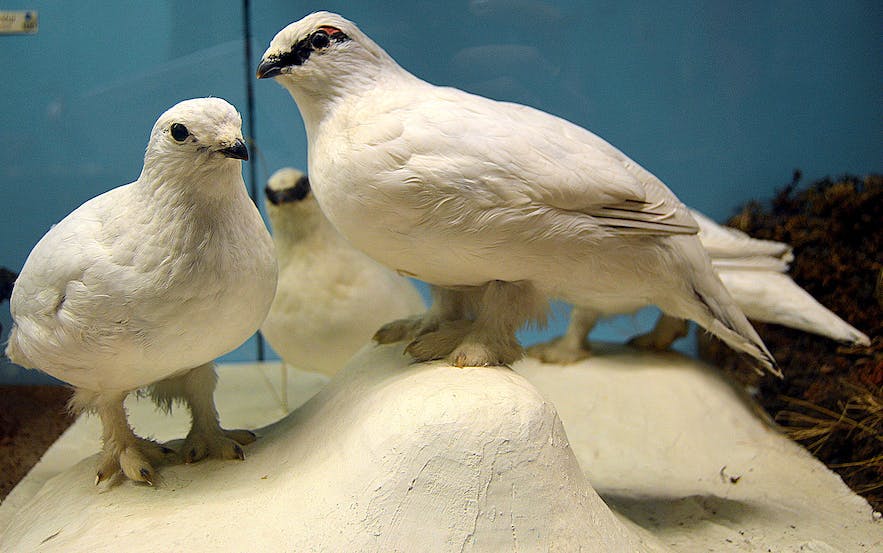 I always feel sorry for the ptarmigan when I see it in autumn and springtime and its camouflage doesn't allow it to blend in. A lovely looking bird, which is haunted by our predatory birds and humans alike as the ptarmigan is a Christmas delicacy, as it were. 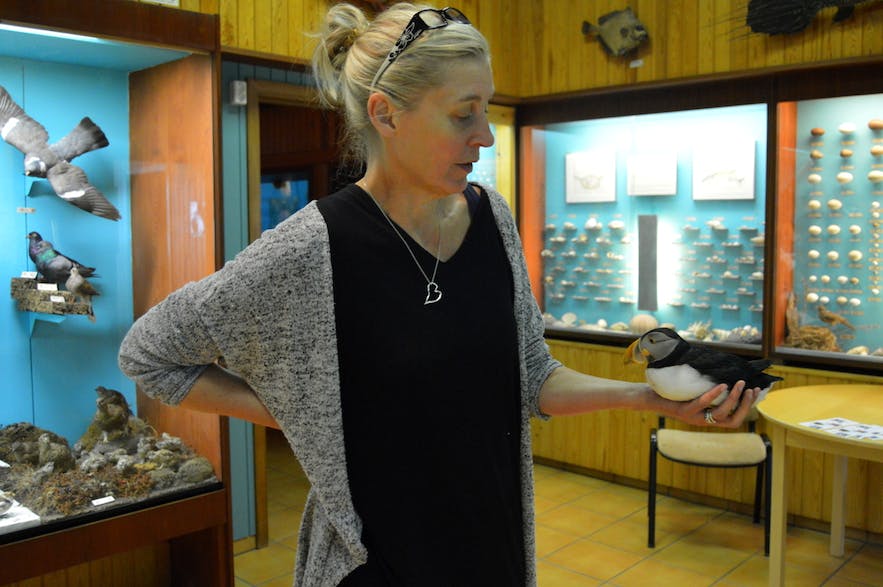 Sæheimar is also a bird rescue centre and birds that are found either injured or chicks without parents are brought to the museum. That is how Tóti the Puffin, the star of Sæheimar, originally ended up at the museum. Tóti, unfortunately, died recently :(

Tóti was found abandoned in a puffin colony when he was only 1 week old, so he must have hatched 6 weeks later than the other pufflings. Poor little puffling wandering around so small at the end of the puffin season when the other much bigger pufflings - lundapysjur in Icelandic, were about to leave their nest. At the time Tóti was found he weighed only 95 gr! 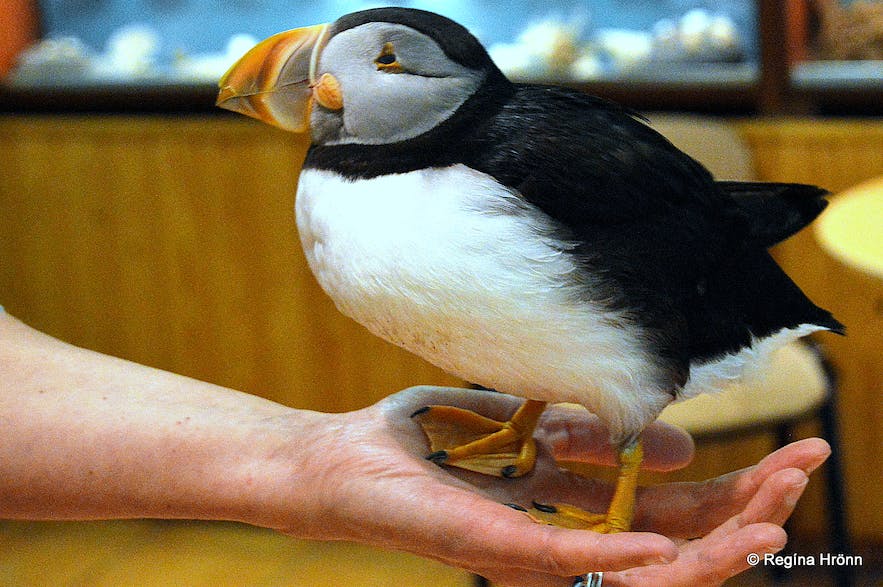 He would never have been able to survive if Sæheimar wouldn't have rescued him. By the time Sæheimar had fed him and he was ready to fly it was already too late to release him and winter was coming, so they kept him and decided on raising him at the museum. Tóti died in 2018 only 7 years old (not that I know how long puffins live, so he might have been old for puffins).

The puffins have an oil gland by the root of their tail and if they are petted they can lose the oil from their feathers, but the oil is there to protect them. 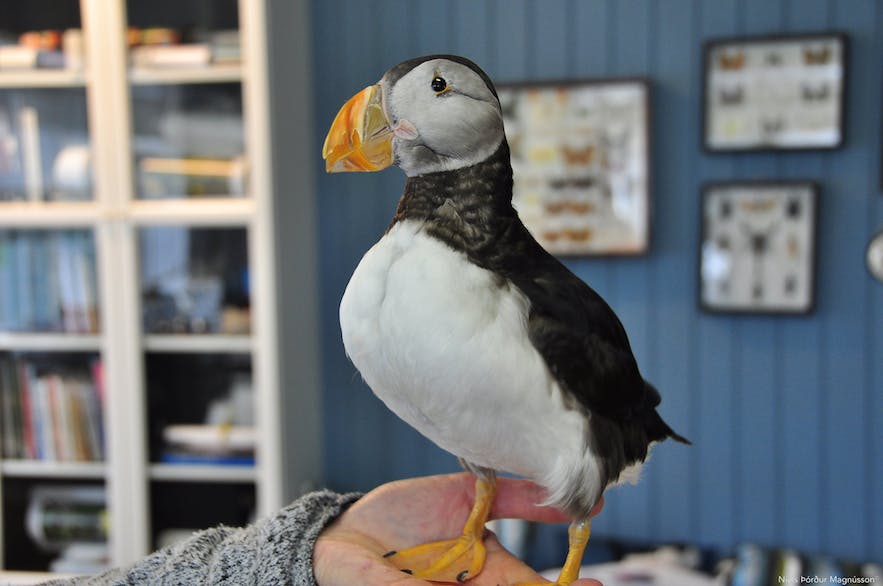 Tóti also needed his rest as sometimes the museum gets a lot of visitors and he got tired. I got to know Tóti the puffin inside the museum where the light makes the photos come out with a yellow hue.

Flash is not allowed as it would hurt Tóti, so my photos are not my best work (not that I am a professional photographer).

A friend of mine, the Dane with the Icelandic roots, Niels Þórður Magnússon, allowed me to use his photo above of Tóti for my travel-blog. Niels Þórður was the only guest at the museum at the time and  Margrét Lilja, the curator of the museum, took Tóti into her office so Niels Þórður could get a better photo. I am grateful for that photo as Tóti looks much better in the light from the window. 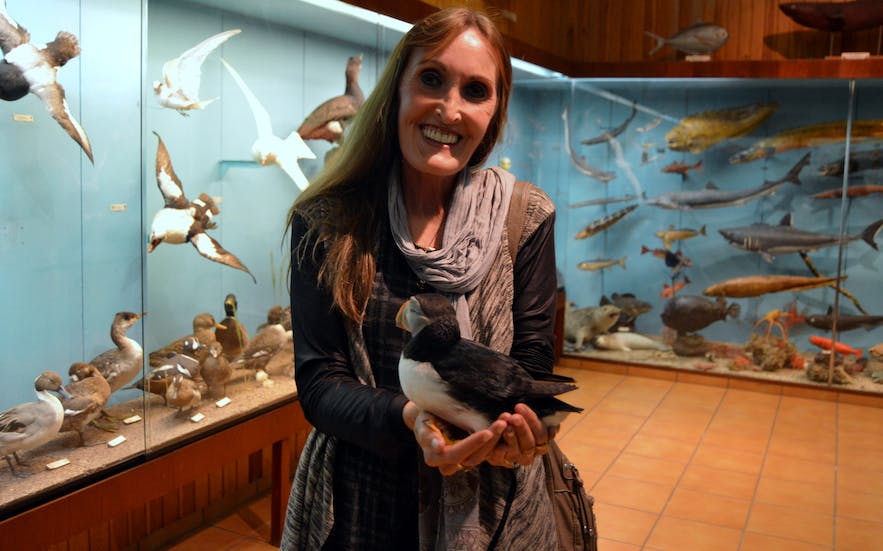 I can tell you that it felt weird being so close to a puffin, which I have seen from afar for so many years of living in Iceland, and to be allowed to hold it was out of this world! I have never felt close to birds, but at this moment I was totally in love with this little puffin, which I was holding in my hands.

We have got the question from tourists how they can get a puffin pet - we do find this to be funny, but I gather that the people asking this question must have seen photos of Tóti and thought that puffins could be kept as pets.

That is not the case, puffins are wild birds and it is only because Tóti was so young and helpless when he (and other helpless pufflings) was found that he adapted to the life of humans at this museum. 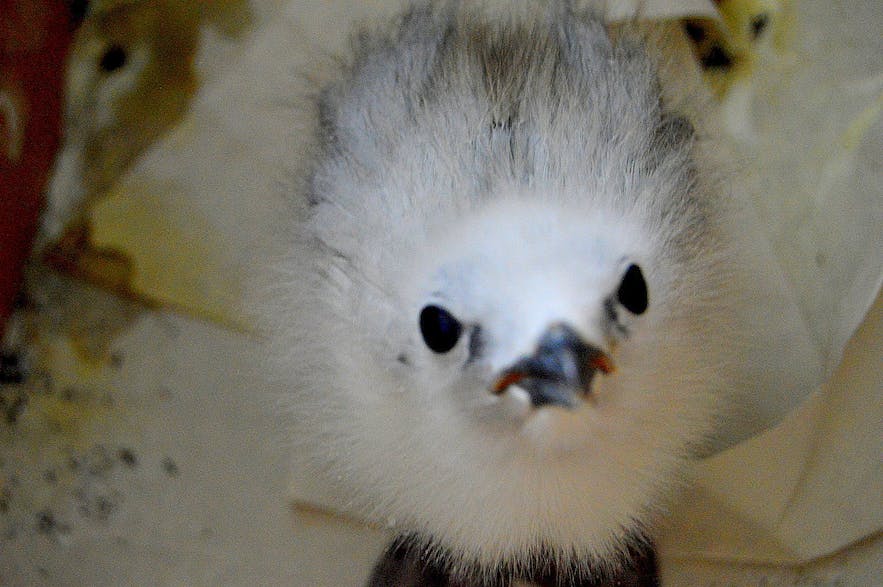 There are two other puffins at Sæheimar, but I didn't see them, they are female puffins with the names Karen and Hafdís.  Karen had an injured leg and Hafdís nearly drowned in the sea after having crashed in Vestmannaeyjabær town and then being released in the direction of the sea by the kids in town, as is the custom here in the Westman islands. Hafdís has been receiving some swimming lessons at the museum ;)

I also visited the office of Margrét Lilja, the curator of Sæheimar, as my husband is selling Origami puffins at Sæheimar and was bringing in more stock. Margrét Lilja is the woman holding Tóti in one of the photos in my travel-blog. In the office were boxes with kittiwake chicks that had been rescued.

They were so loud with their beaks open constantly asking for food.  When I looked into the boxes they went all quiet and ogled me. I took a photo of one of them; how cute is this fluffy kittiwake chick in my photo above! 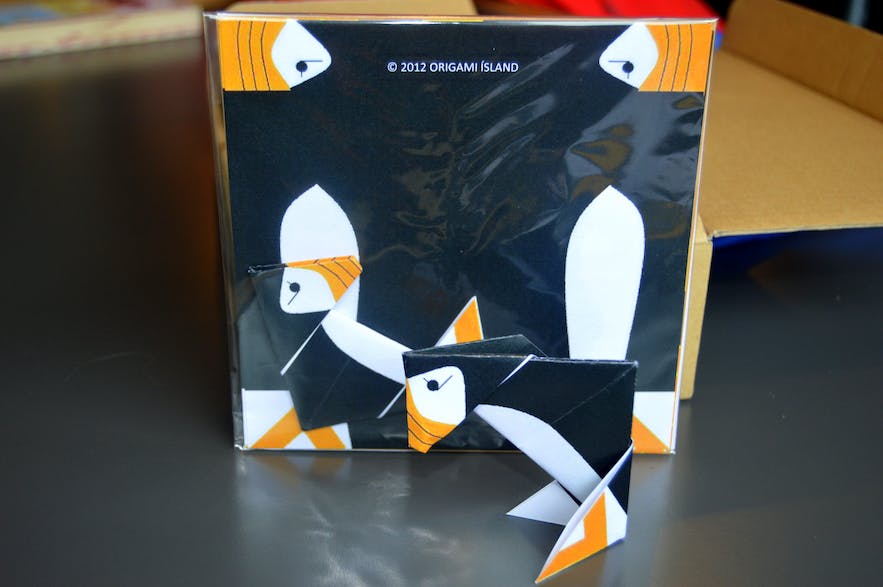 In the photo above you will see my husband's Origami puffins, which is a design of Origami Ísland (Iceland). They told us at Sæheimar that their Japanese visitors are the best buyers of this Origami design - of course :)

At Sæheimar you can get to know all about puffins and see different types of puffins.

Did you know that the puffins are monogamous and only lay one egg at a time? They dig burrows (70-100 cm long) where they lay their egg; so all around the puffin nesting areas, you will see holes or burrows in the grass and hills. 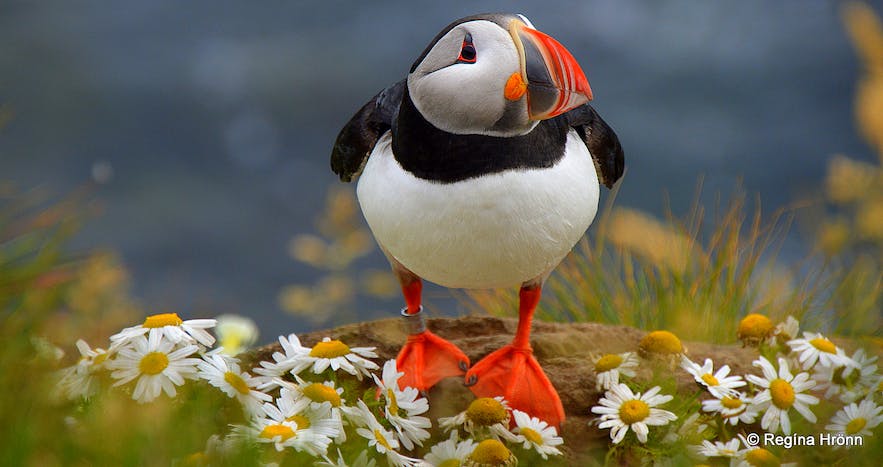 The puffins at Látrabjarg

This is also why nobody is allowed to sit on the edge of Látrabjarg cliff, as it is not safe. Látrabjarg is the best place to get close to the puffins in Iceland, in my opinion. See also my travel-blog: 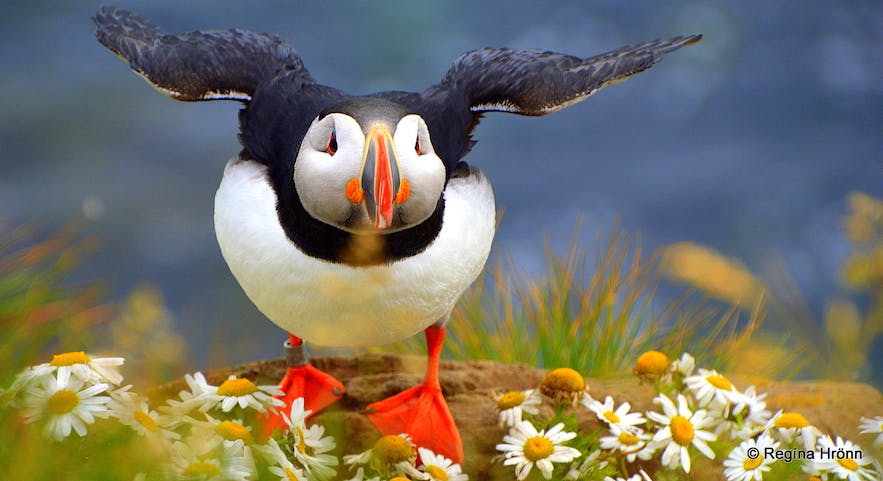 The puffin, which has become so popular by our foreign visitor that it is almost like our national symbol, is the most common bird in Iceland and the Westman islands are the biggest puffin breeding colony in the world; around 1.1 million birds!

There is a reason why the puffin has been called the symbol of unity in the Westman islands.

Around 8.000,000 - 8 million - puffins can be found in Iceland, so you are bound to see a puffin if you visit us from mid-April and until mid-August, which is the breeding season for the puffins in Iceland. The number of puffins in Iceland is sadly decreasing. 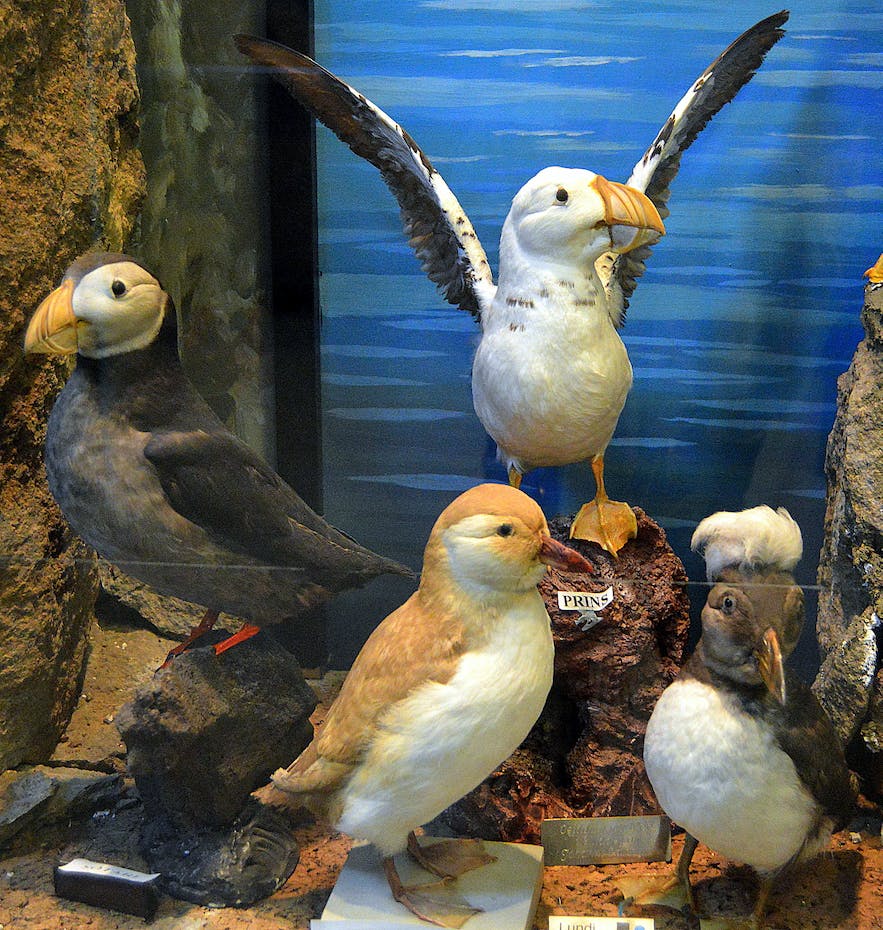 Two years ago in 2014 British ornithologists claimed that they had discovered Europe's oldest puffin on an island off the coast of Scotland - a 34-year-old puffin!

But the oldest puffin that we know of in the Westman islands is 42-47 years old, being at least 38 years old in 2014. The Brits ignored us and have identified their puffin to be the oldest ;)

In the photos above and below you will see different varieties of puffins, called the Prince and Princess of the puffins, Sótari or Chimney sweeper, Toppari or the one with the feathers on his head, which is a very rare variety of puffins. I have never seen these varieties in nature, but I would absolutely love to see them one day, especially the one with the feathers on its head! 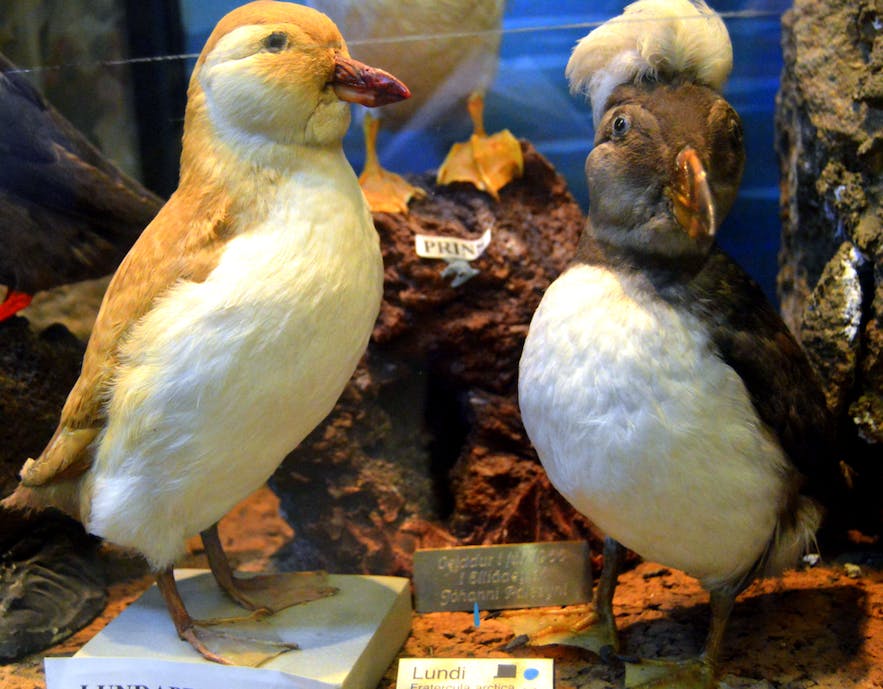 In my photo below you can see a fully grown puffin with its puffin chick or puffling.  It hasn't got the orange colour yet and its beak is grey, so it is not as distinctive as its parents.

But even the grown-up puffins lose their distinctive orange colour in the wintertime when they are out at sea and only wear, so to speak, this beautiful orange colour during their breeding season. 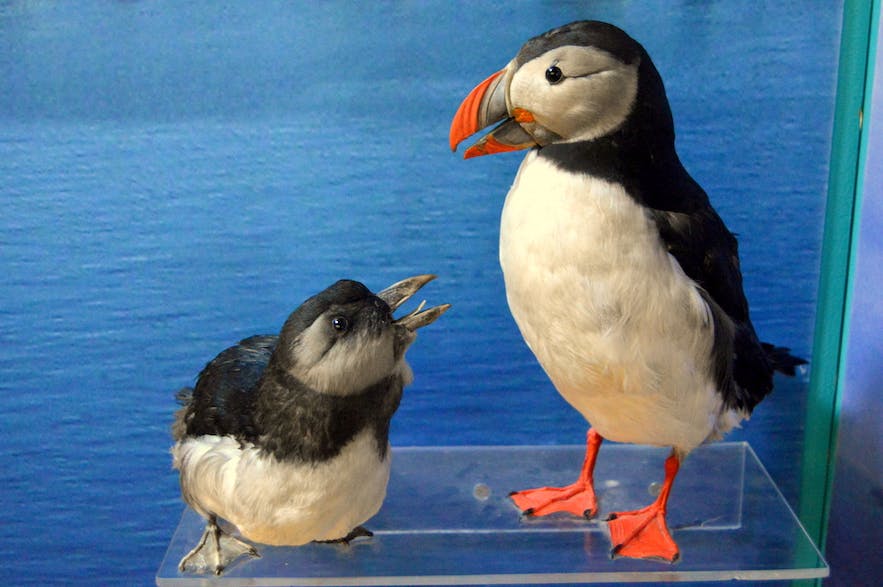 The pufflings then manage to fly to the sea by themselves. 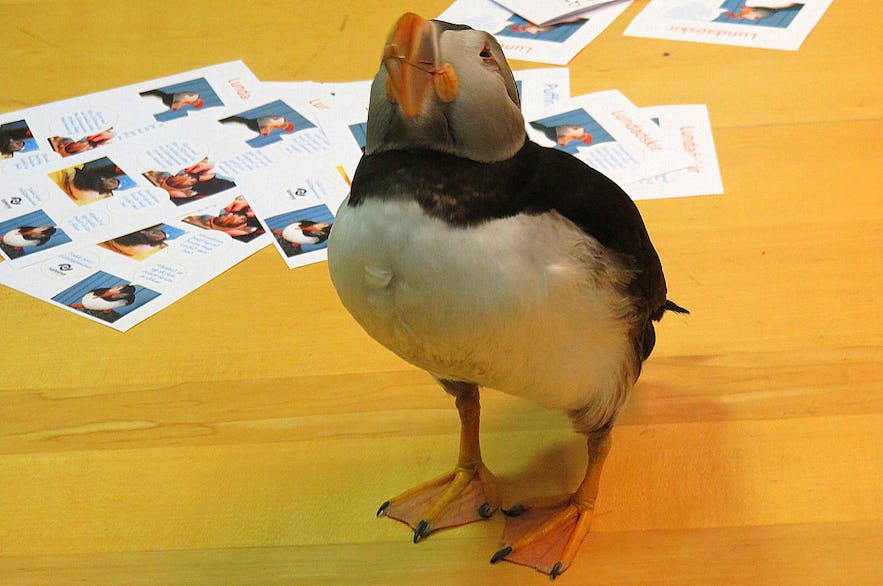 Admittance to Sæheimar was included in the Puffin and Volcano tour, which I joined.  So on the same day, I visited this lovely museum twice. If you want to read up on this tour, then here is my travel-blog:

Sæheimar closed in 2019 after having been in business since 1964-1965. The animals have found a new home at Ægisgata 2 at the Sea Life Trust.

Guided tours to the Westman Islands

If you want to visit the Westman islands you can rent a car in Reykjavík and drive to Landeyjahöfn in South-Iceland and take the ferry Herjólfur over to the islands. Once there you can take tours on the island, or explore it on your own.