The museum was built around one of the houses which got totally buried under the cinders from the volcanic eruption. Eldheimar has now become one of the biggest attractions on the Westman Islands. 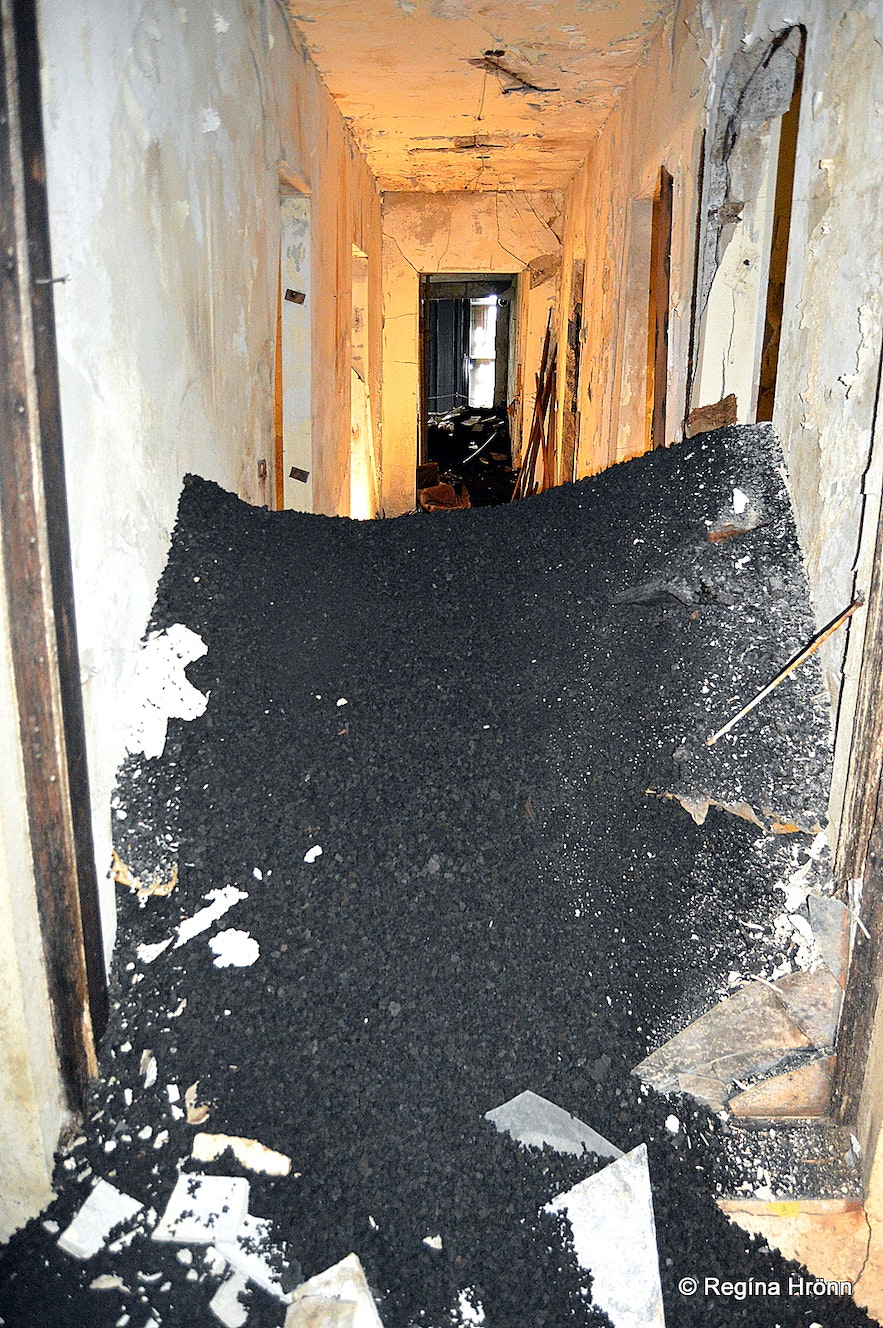 The original plan for the museum was to dig up the houses in a whole street, but the final decision was to have one house on display at Eldheimar museum.

In my photos above and below you will see the former home of the inhabitants of Gerðisbraut 10, Gerður Sigurðardóttir and Guðni Ólafsson, who built this house in 1971 and lived there with their 3 sons.

The house at Gerðisbraut 10 was excavated and you will see the destruction the eruption caused to the homes of the Islanders, who had to leave their homes and belongings behind when they fled the volcanic eruption in 1973. 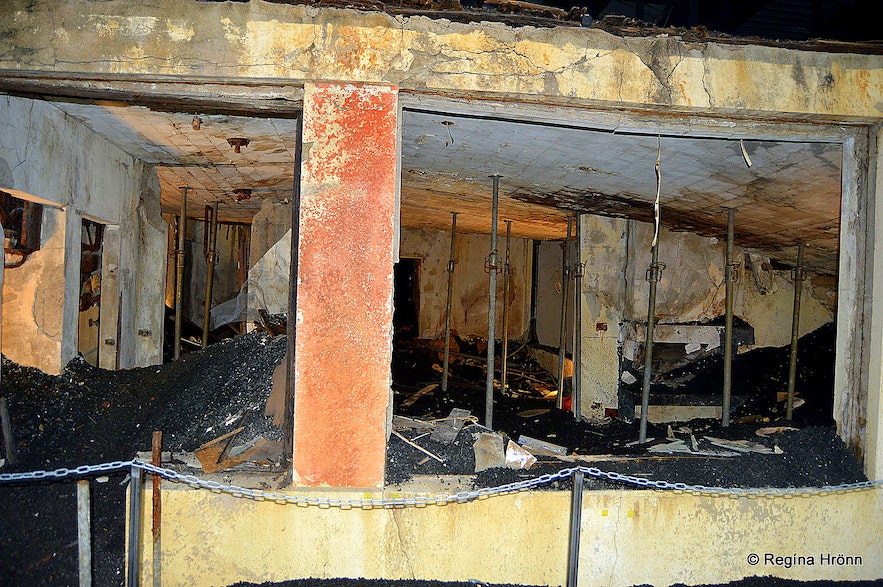 I can tell you that it broke my heart standing in front of this house, half-filled with ash and pumice, and scattered around the house I could spot the belongings of these people, a piece of clothing, a plate, etc, half-buried in ash. It brought tears to my eyes and my husband and my mother-in-law, who were travelling with me, said the same thing.

Now, to tell you a little bit about this volcanic eruption before you visit the Westman islands - on the 23rd of January 1973 a volcanic eruption started on Heimaey island, the largest and only inhabited island, which lasted until the 3rd of July 1973. It is the only volcanic eruption to start in a town in Iceland. 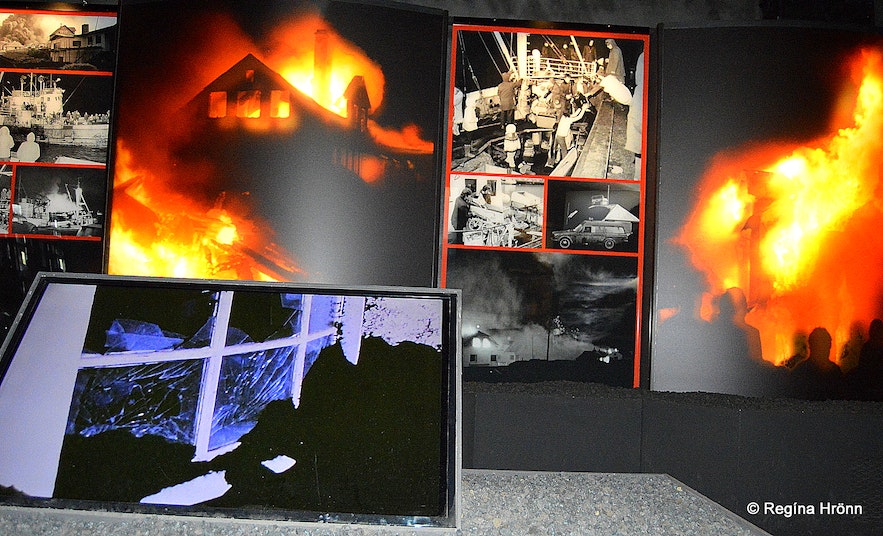 A huge volcanic fissure opened up only a couple of hundred meters away from Vestmannaeyjabær town. The inhabitants had to be evacuated immediately and their houses got buried under the lava and cinders :(

People were flabbergasted as a volcano hadn't erupted in the Westman islands for some 5000 years or since Mt. Helgafell erupted. The volcanic fissure was 1,600 metres long and spew lava from 30-40 craters high up in the air! 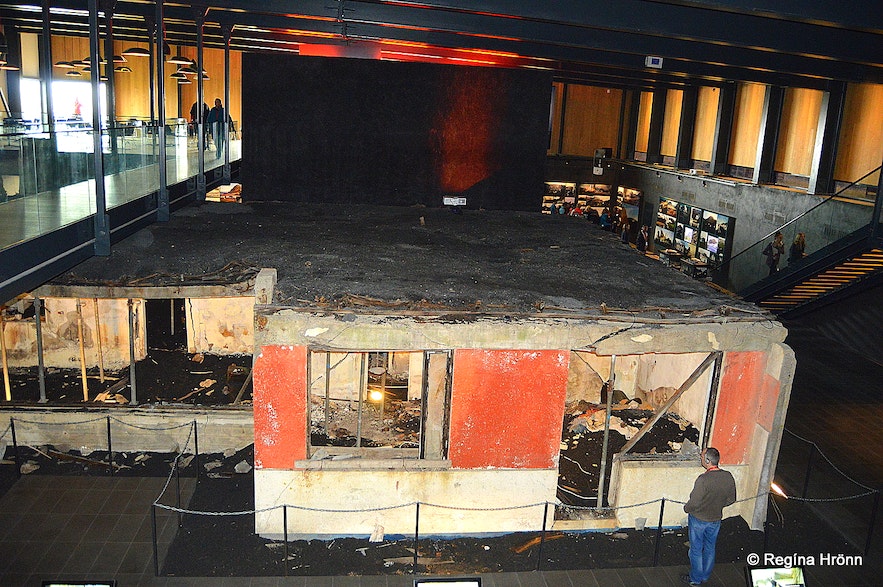 What made matters worse were the lava bombs which landed on the houses and put them on fire. 400 houses were later deemed totally ruined of the 925 houses which got damaged in the eruption. 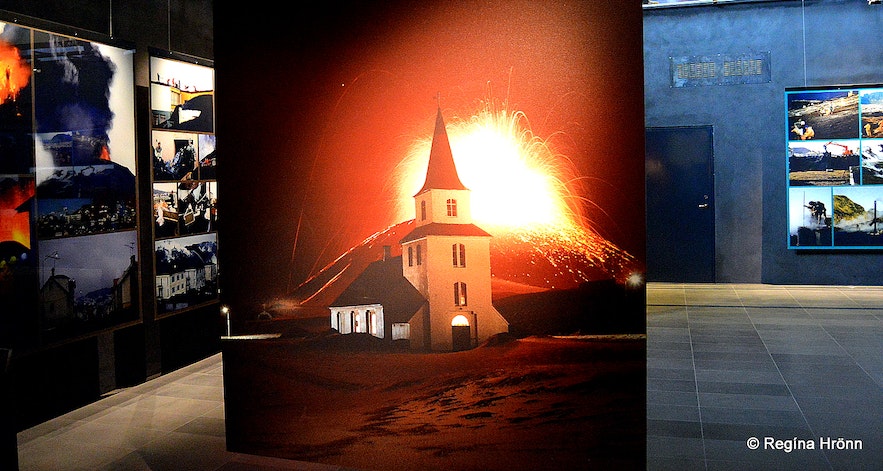 The first indication of the volcanic eruption was an earthquake at midnight and another one right before 2 am. Then a massive fissure opened up!

It was fortunate that on the night of the eruption the whole seafaring capacity of the Westman islands was in the harbour as there had been a storm; so that the inhabitants could be evacuated quickly from the erupting island.

Nobody got injured during this eruption apart from a horse that got spooked and ran towards the fire. And a man, who had gone down to the basement of the pharmacy, died from the poisonous fumes from the eruption.

The poisonous fumes from volcanic eruptions are a huge problem and can make you sick, very weak, lose consciousness and die in a few minutes. Several houses exploded after this heavy, poisonous gas had found its way into the houses.

There was a grave possibility that the lava-flow would close the mouth of the harbour or head further in the direction of the town. Pumps were used to cool down the edge of the lava flow with seawater. The fire-brigade started cooling down the lava flow, but more powerful pumps were needed. 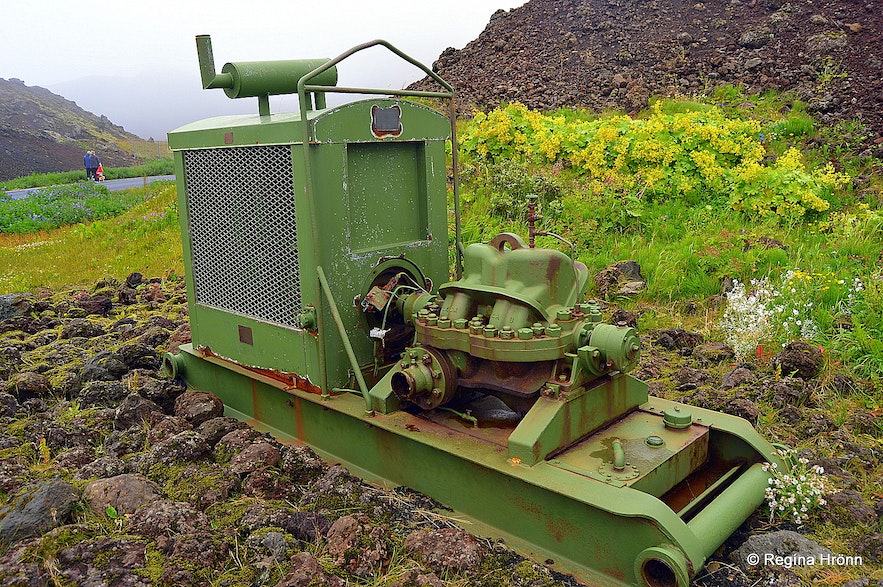 Pumps were used to cool down the lava flow

Up to 75 people helped with cooling down the lava flow and it is believed that 6.2 million tonnes of seawater were pumped and sprayed on the lava flow. This was a dangerous task, so kudos to these people.

A pump ship, Sandey, was brought in. It could pump up 400 litres of seawater per second and spray it up to 30 metres up on the lava flow. This proved to be successful. Later on, much more powerful pumps were flown in from the USA, which could pump the water 2-3 times higher. 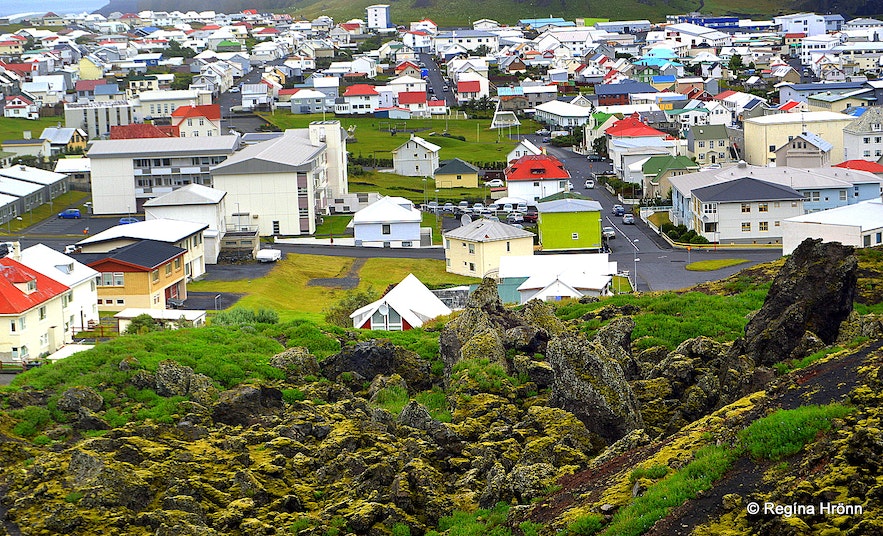 As soon as the volcanic eruption stopped on the 3rd of July 1973 (how well I remember this happy day, as not only was this the end of the eruption, but it was also my grandfather's 70th birthday) clean-up started and many of the islanders returned to the island, not all of them though.

Clean-up and restoration work was an immense task and if you look at photos from back then and see the town now one cannot but applaud these people, who took on the massive task of cleaning up the cinders and restoring Vestmannaeyjabær town back to a functional town. 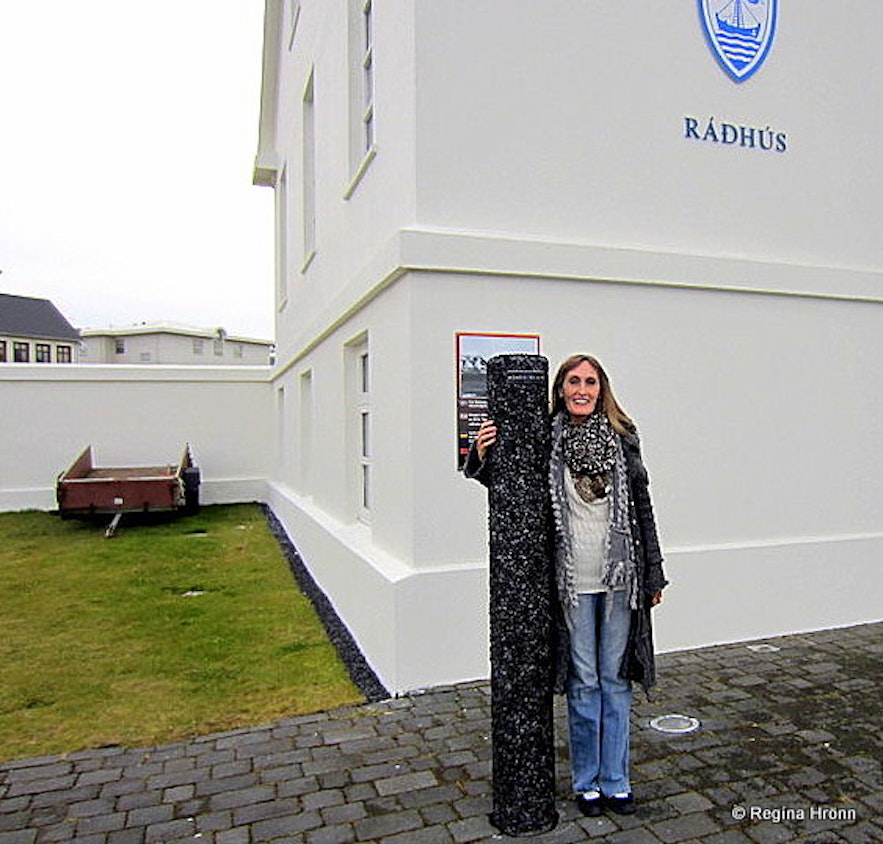 This column is as tall as me

When you explore the town on Heimaey island you will see several columns, which show the height of the cinders and pumice/tephra which the volcano Eldfell spewed out during the volcanic eruption.

One of them is by Town Hall and is 165 cm tall; imagine the amount of cinders and pumice in this area! I am only 1 cm taller than the height of cinders and ash that was left here after the volcanic eruption. 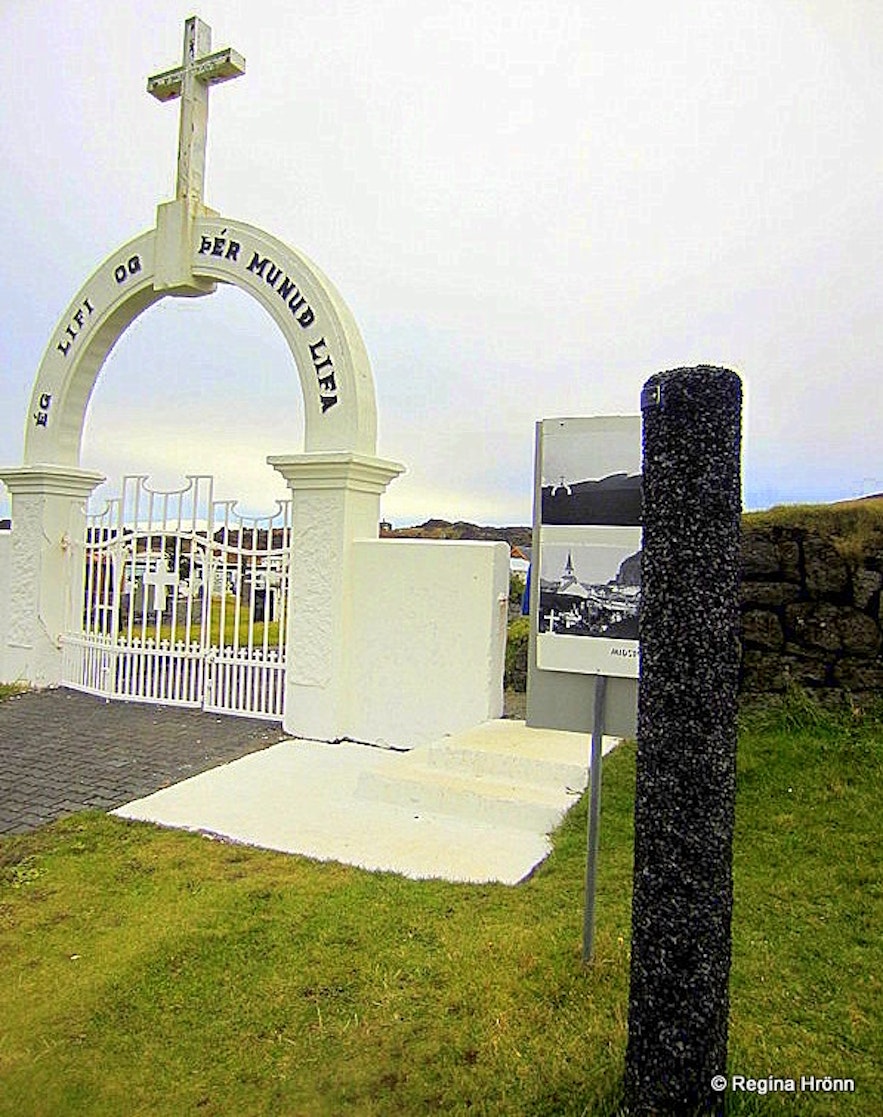 The entrance to the graveyard

On the entrance gate to the graveyard is written: "Ég lifi og þér munuð lifa" meaning "I live and thou shalt live".  The graveyard was covered in ash and pumice and the pumice went as high as these words of Jesus on the graveyard gate!

I remember well, being 7 at the time, the eruption and the havoc it caused in Iceland, how my parents reacted and how the news was filled with footage on this dreadful cataclysm when a volcanic eruption started in a populated area! 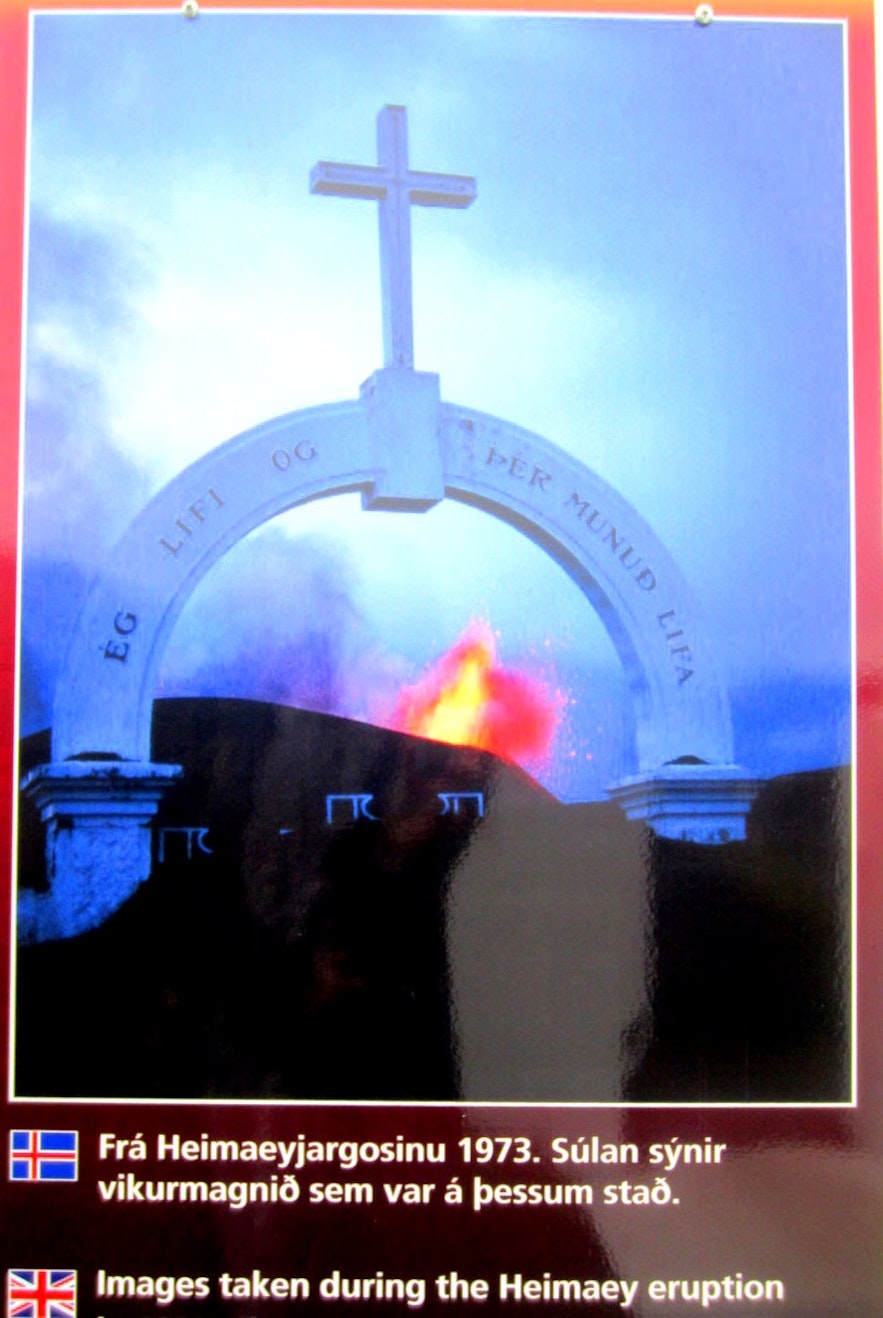 I especially remember that the inhabitants of the Westman islands drove with the pumice on the roof of their cars for the longest time so that they would recognize each other in the capital city Reykjavík and on the mainland.

And when we moved into a new house in the summer of 1973 I remember that the basement of that house was filled with the belongings of Vestmannaeyingar or Eyjamenn - as the inhabitants of the Westman islands are called in Icelandic. 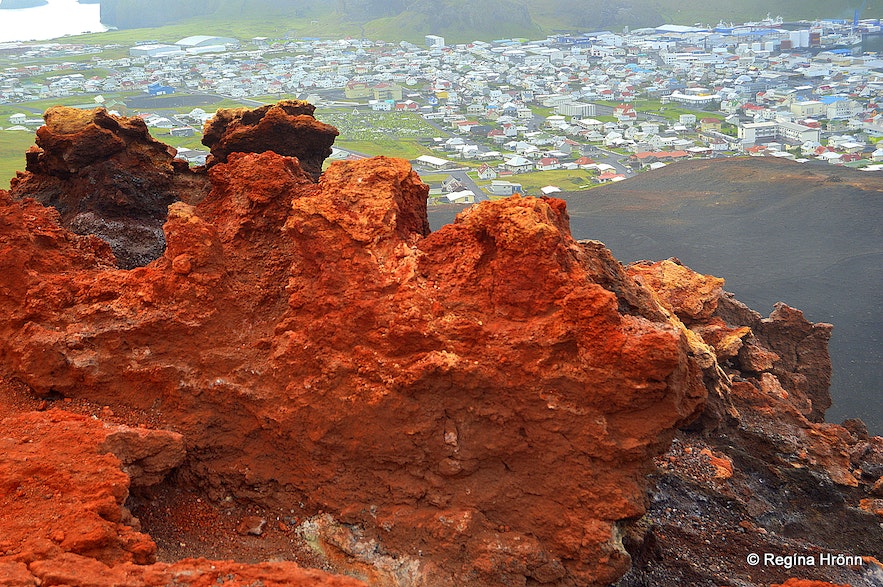 The view from Eldfell volcano on a foggy day

There are some stories I remember from the eruption. People went from house to house to warn the sleeping inhabitants about the volcanic eruption. This is how we say in Icelandic that a volcanic eruption has started: "Það er komið gos" or "Það er byrjað að gjósa".

The first sentence "það er komið gos" can also have another meaning, so when the store owner was awoken by a knock on his door in the middle of the night and heard this sentence, he told them to leave it on the doorstep! As the other meaning of this sentence is:  "The soda pop has arrived".  I hope I am quoting this correctly. 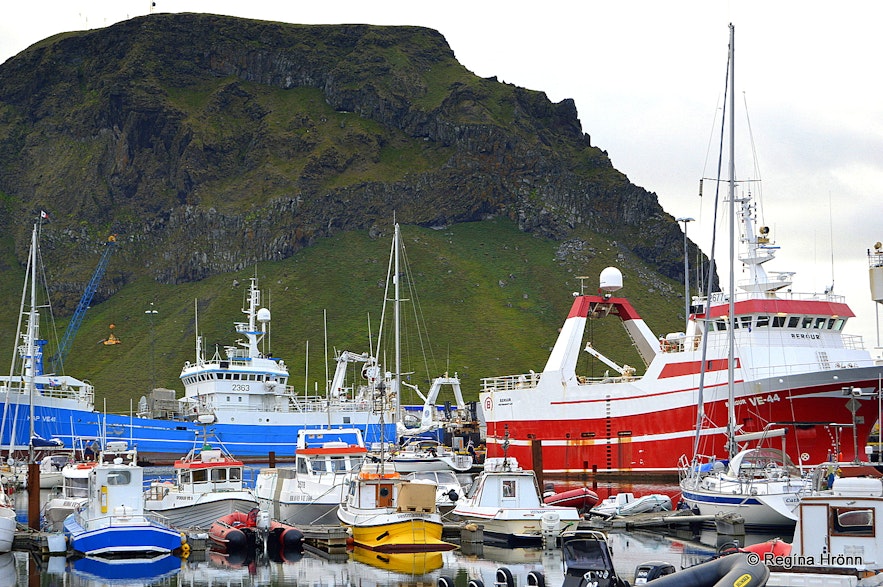 The startled inhabitants started phoning their relatives on the mainland of Iceland, but at first, nobody would believe them and thought they were joking or even drunk!  As who would have imagined that a volcanic eruption would be starting in the middle of the night in the Westman islands?!

A woman answered, when awoken from her sleep, that she would see the eruption in the morning, probably thinking that this was another eruption like the one when Surtsey Island got created ten years earlier in 1963 some 20 km south-west of the Westman Islands. 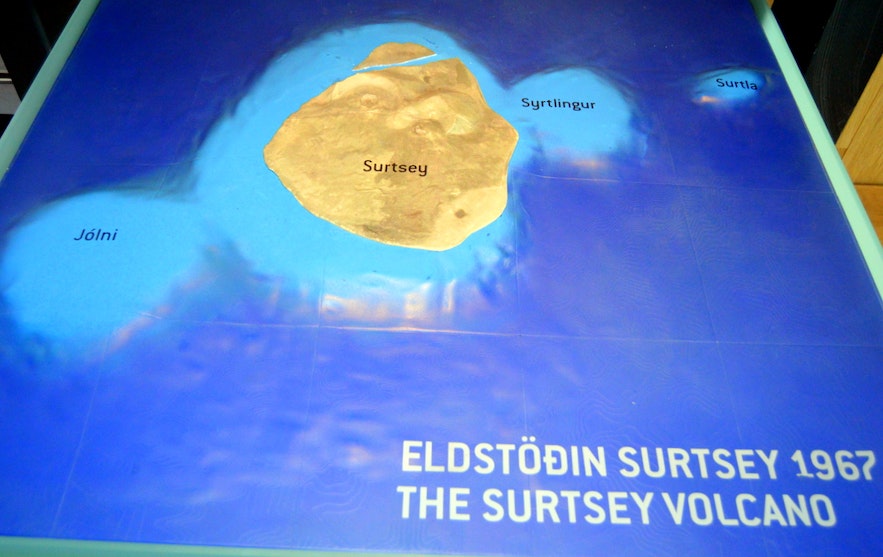 Surtsey Island is located 20 km south-west of the Westman Islands and is a part of the islands.  It was created, or born, in a submarine volcanic eruption back in 1963-1967 - the birth of a brand new volcanic island, creating the southernmost point of Iceland.

Surtsey has been protected ever since and was declared as a nature reserve in 1965 (the year I was born here in Iceland), so it is a unique place for a handful of scientists to observe the colonization process of new land and the flora and fauna.

Surtsey has been a UNESCO World Heritage Site since 2008 and UNESCO has described it as a pristine natural laboratory. 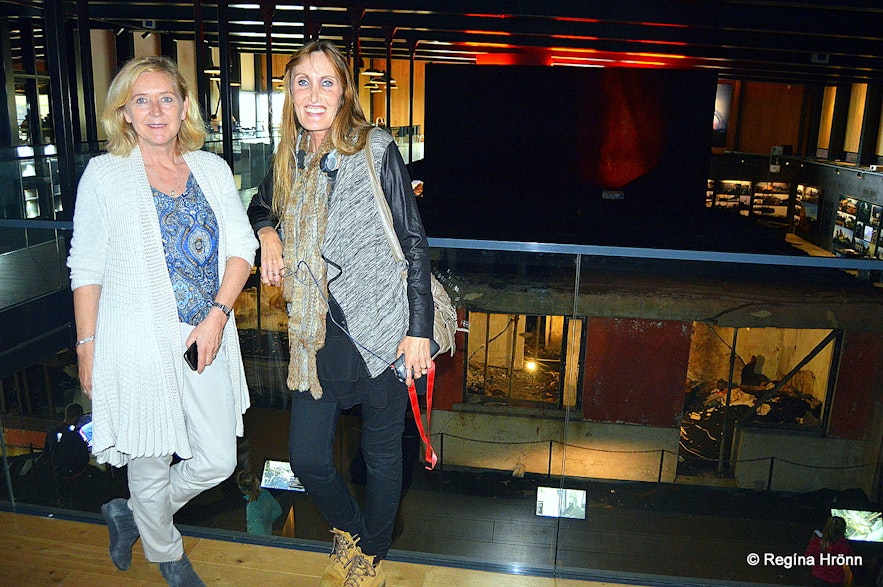 With the lovely Kristín at the Eldheimar museum

I want to thank the curator of this fantastic new museum, Kristín Jóhannsdóttir, for all her help and her guidance when I visited Eldheimar museum. She is a local and a very lovely lady, who herself experienced the volcanic eruption back in 1973.

And kudos to the designer of the exhibition, Axel Hallkell Jóhannesson, for a job well done in creating the ambiance at the museum.

Eldheimar museum - the Pompei of the North, is truly an excellent tribute to a disastrous volcanic eruption in a populated area. 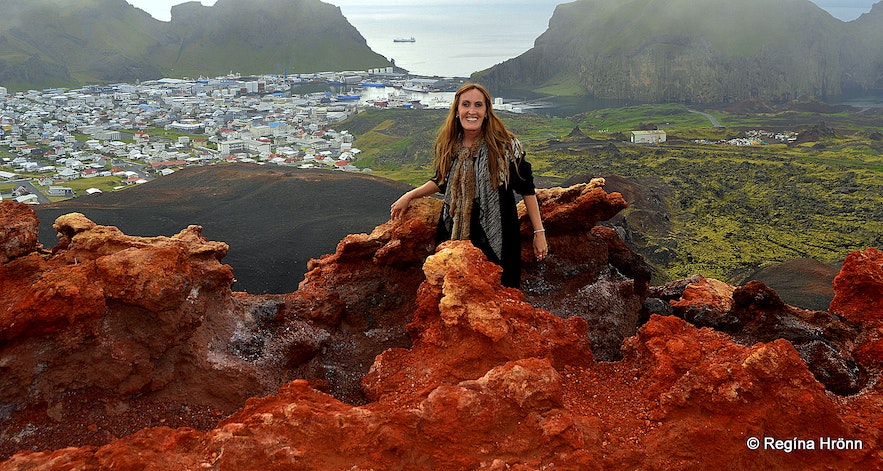 There is so much to see and do in the Westman island, but I summed up my experience in 4 travel-blogs, so you wouldn't get lost in reading all these travel-blogs.

Here are my other travel-blogs on my visit to the Westman islands:

Westman Islands - Sæheimar - Have you ever met a Puffin up Close and Personal? 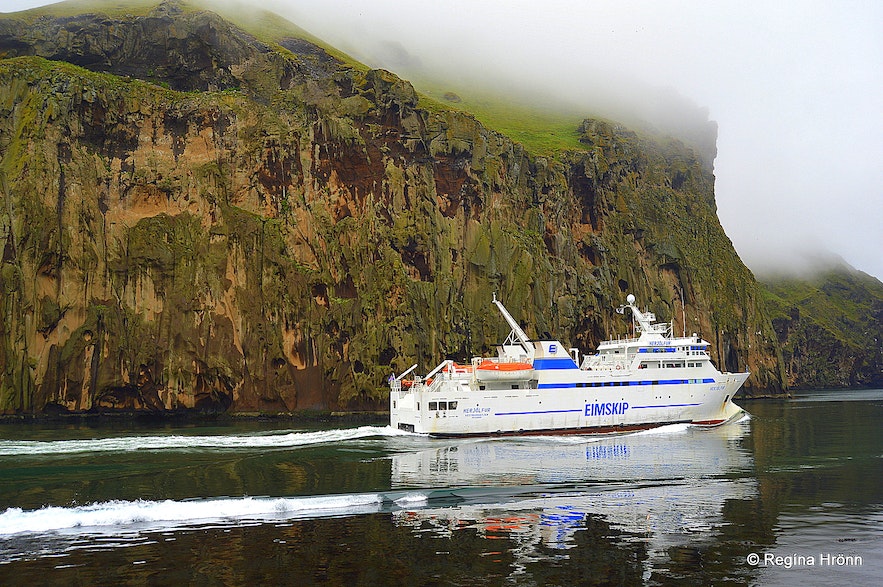 If you want to read up on the volcanic eruption in 1973, I know of a really good book Volcano - ordeal by fire in Iceland's Westmann islands, which is an Iceland Review book written during the eruption in 1973. It is 96 pages with loads of photos and really well-written text.  My mother lent it to me and I read it before writing this travel-blog.

If you want to visit the Westman islands then there are several tours of the islands available run by the locals. You can rent a car in Reykjavík and drive yourself to Landeyjahöfn in South-Iceland and take the ferry Herjólfur over to the islands and take tours on the island itself like I did.