Víðimýrarkirkja Turf Church in North-Iceland - is it the most beautiful of them all?

Hidden away in Skagafjörður in North-Iceland you will find a beautiful old turf church called Víðimýrarkirkja church - a true masterpiece. Our third president, Kristján Eldjárn, once said that this turf church was one of the most clear-cut and beautiful relics of old Icelandic architecture there is.

I think these old turf churches are all gems and cannot choose between them, but Víðimýrarkirkja church sure is beautiful. 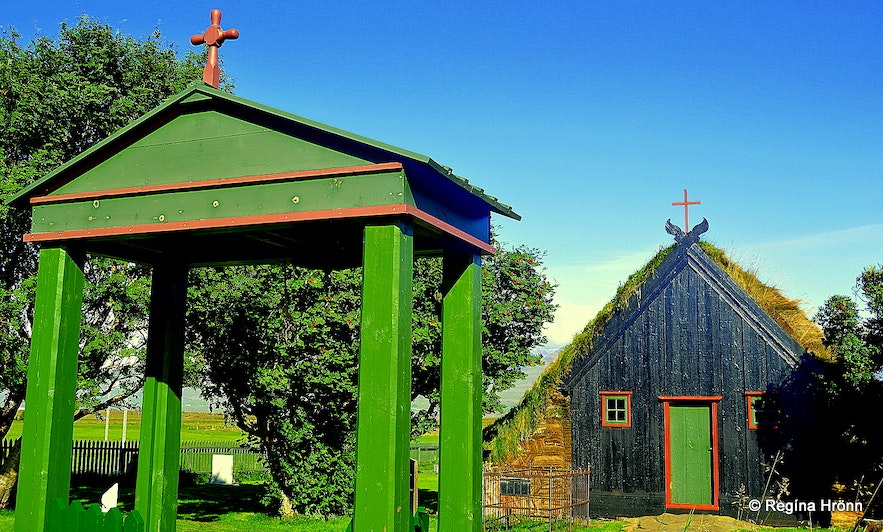 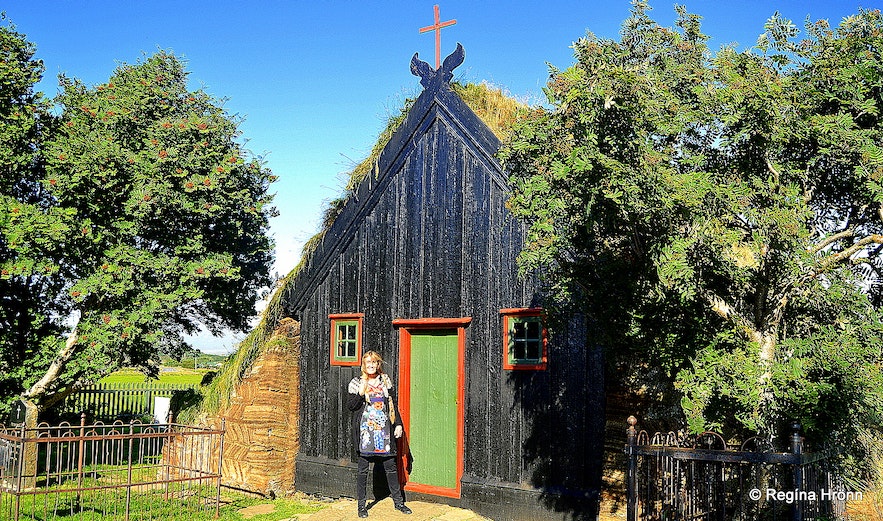 By Víðimýrarkirkja turf church on a sunny day

It is written in Sturlunga Saga - the Saga of the Sturlung clan that the powerful Chieftain Snorri Sturluson made a fortress here back in 1220. So it can be seen that this land, Víðimýri, was indeed a most significant place here in Iceland.

Snorri Sturluson - the most influential Icelander

The whole area of Skagafjörður is a Viking area with a great deal of history, which I have written about in my travel-blog:

The bloody Viking battles in Skagafjörður in North-Iceland 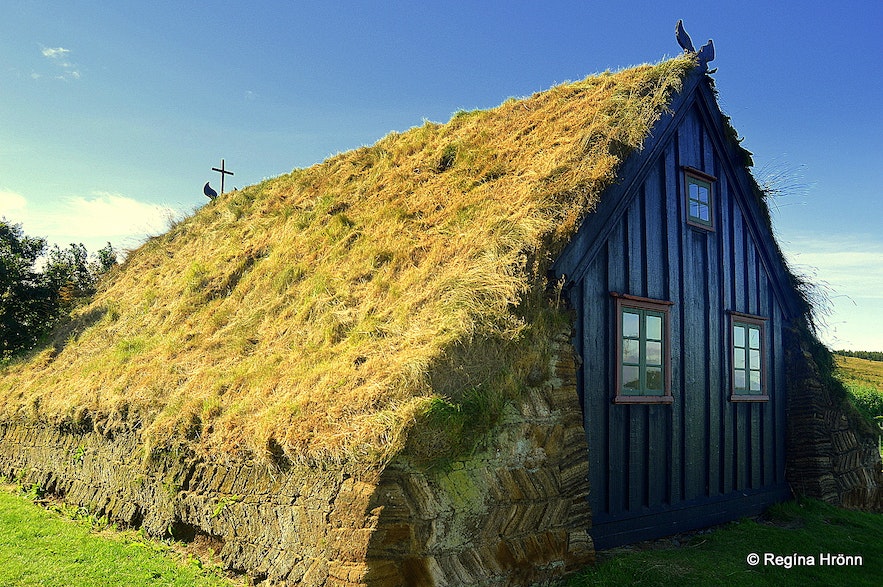 You can see how yellow and dry the turf is in some of my photos. The turf has to be regularly renewed so sometimes the roof is green and lush. The timber is original though. The building material is turf from the land of Víðimýri and driftwood from Skagi.

There has been a church at Víðimýri since the adoption of Christianity in Iceland in the year 1000. The church was dedicated to the Virgin Mary and the Apostle Peter during Catholicism.

Of the many ministers serving at this church, Guðmundur góði Arason was the best known, but he later became the bishop at Hólar in 1203-1237. 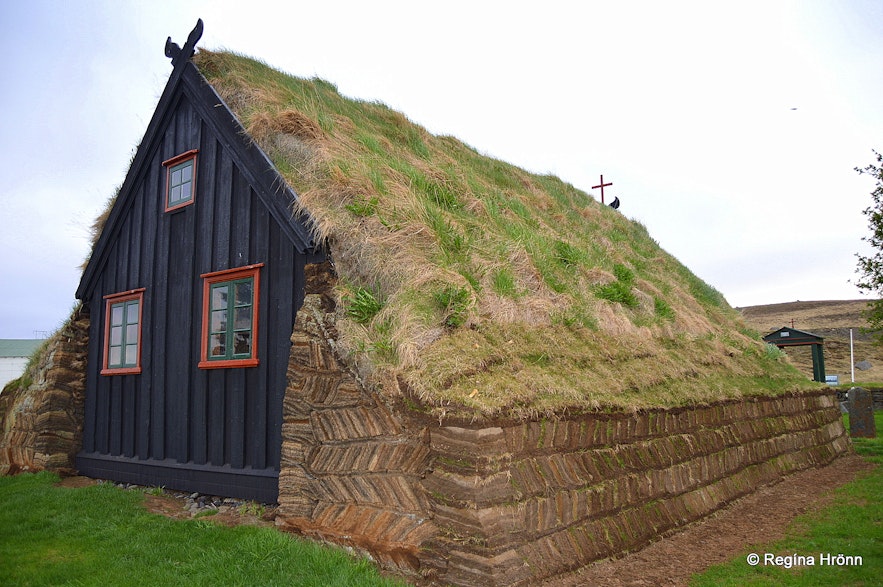 ​There are many old artefacts in this lovely church, f.ex. the Danish altarpiece, a triptych, which dates back to 1616 depicting the Last Supper, the Crucifixion, and the Resurrection.

The pulpit dates back to the 17th century. It is beautiful with paintings of Christ and the Evangelists. Some of the artefacts from the church are preserved at the National Museum of Iceland. I apologise for the quality of the photo, I took it back in 2008 with a small camera. Must pop up to Skagafjörður again to get better photos. 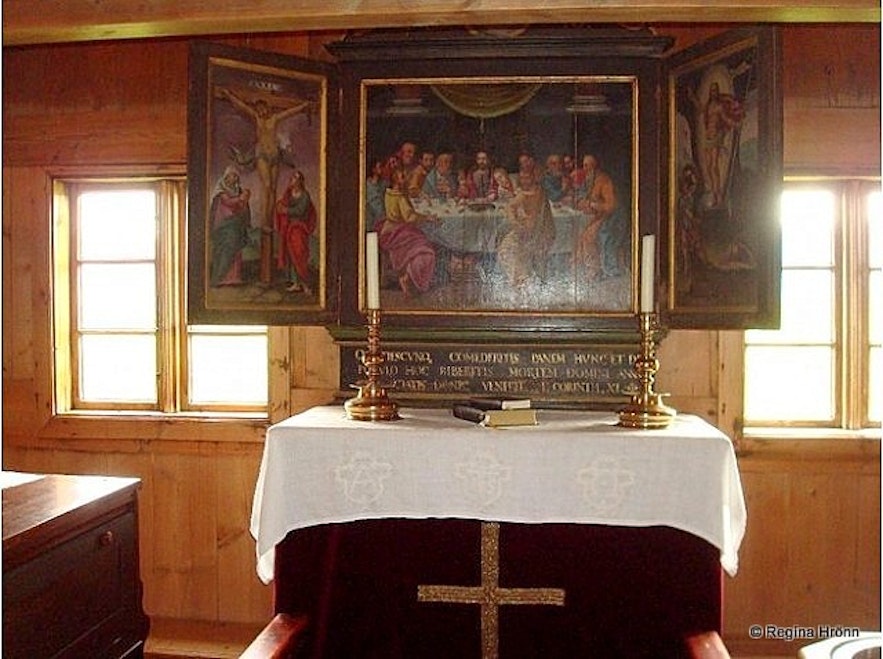 Inside the church, one can see the seating of earlier time after the Reformation in 1550 - men on one side (south) of the aisle and women on the other side (north).

​There were plans of knocking this beautiful turf church down and building a concrete church in its place, but fortunately, Matthías Þórðarson, Director of the National Museum of Iceland, fought for its existence. This beautiful church has belonged to the National Museum of Iceland since 1936 and is a part of the museum's Historic Buildings Collection. 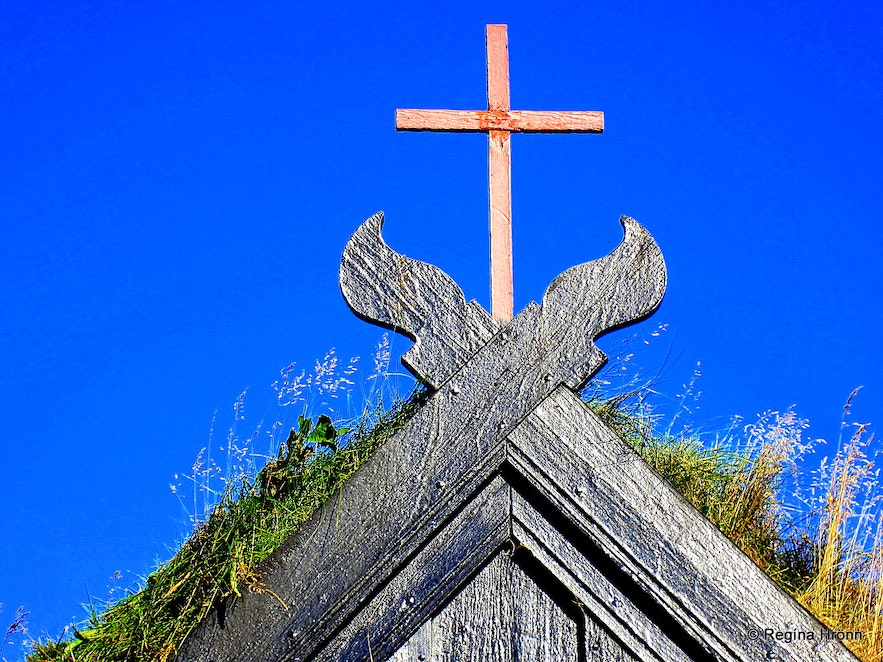 There is a legend connected to Víðimýrarkirkja church, written in Þjóðsögur Jóns Árnasonar  - the Collection of Folklore of Jón Árnason.  It goes like this:

"Mt. Móðólfsfell is the name of a mountain peak by Vatnsskarð or in the mountains in the vicinity of Vatnsskarð. There is a cave in the mountain, but its opening is now blocked by collapsing rocks.

Once upon a time, a troll lived in that cave, by the name of Móðólfur. The mountain is named after that troll. He enraptured a woman from the region. The woman and the troll fell in love and the woman fell pregnant. The foetus was so imposing that she couldn't give birth to it and died in childbirth.

Móðólfur the troll moved her body one night to the church at Víðimýri - in a skillfully made coffin. The coffin stood in front of the church door one morning and next to it was a ring made of copper and a coil with runic characters, explaining what had happened - the copper ring was a gift to the church serving as a burial fee.

The body was buried at Víðimýrarkirkja church and the ring has since then been placed in the church door. It is said that Móðólfur went back to his cave and died of grief". 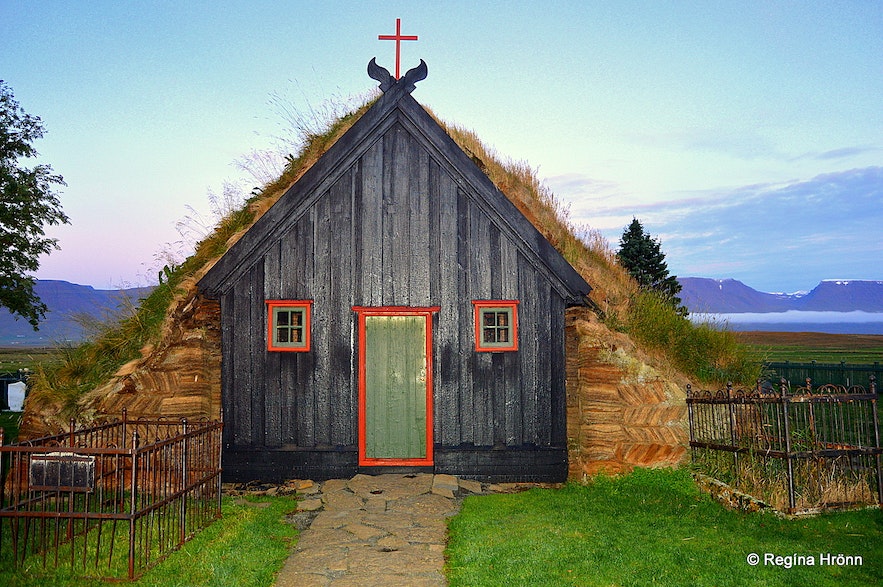 Víðimýrarkirkja turf church in the dusk

Víðimýrarkirkja turf church is located in Skagafjörður, south of Varmahlíð village. It is off ring road 1 as you drive up to or down from Vatnsskarð mountain pass.

If you would also like to see a beautiful turf-house then you can visit Glaumbær in Skagafjörður, which is close by.

To reach this area you can rent a car in Reykjavík and drive to Skagafjörður in 3.5 hours.

Let's remember to treat these beautiful turf churches with respect. There are only 6 of these extraordinary turf churches left in Iceland and they are fragile and cannot withstand too much traffic. To me, they are pure gems.

Have a lovely time in Skagafjörður :)