Visiting the blue ice cave in the Vatnajökull glacier is something I will never forget, it left me totally speechless! I was on a tour with the Guide to Iceland team with the purpose of checking out the ice caves in this area. We had already visited the beautiful aquamarine ice caves in Fláajökull glacier earlier that same day.

After visiting the ice cave in Fláajökull glacier, I was very excited about visiting another ice cave, as these rare natural ice caves are out of this world.

The ice cave guides go look for ice caves every winter and we are always eager to see what the newly formed ice caves look like each year. 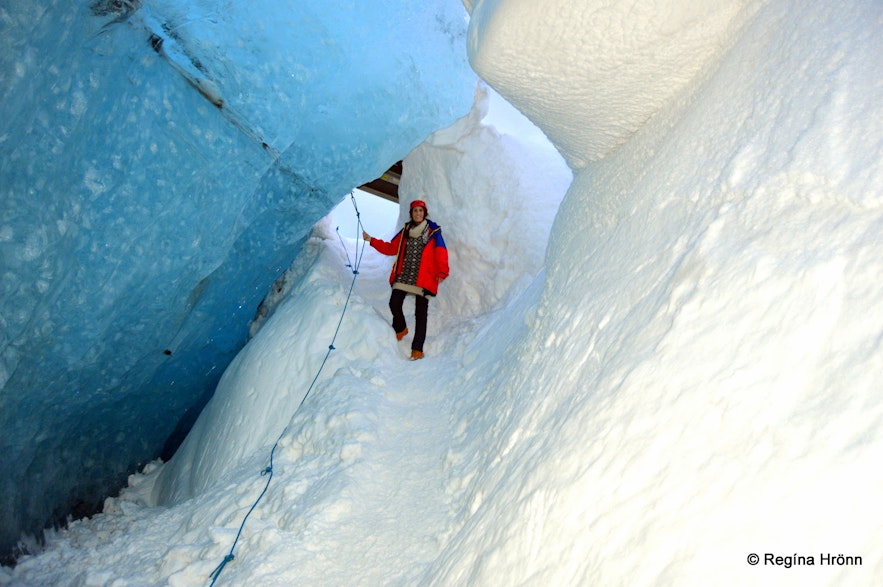 I had already seen some pretty amazing photographs from inside such ice caves, and was dying to see this ice cave with my own eyes.

We met our tour guide at Jökulsárlón glacial lagoon and were driven in a specially modified car on a very bumpy mountain road up to the glacier. The ride only took 15 minutes and there was a very short and easy 5-minute's-hike to the mouth of the ice cave. 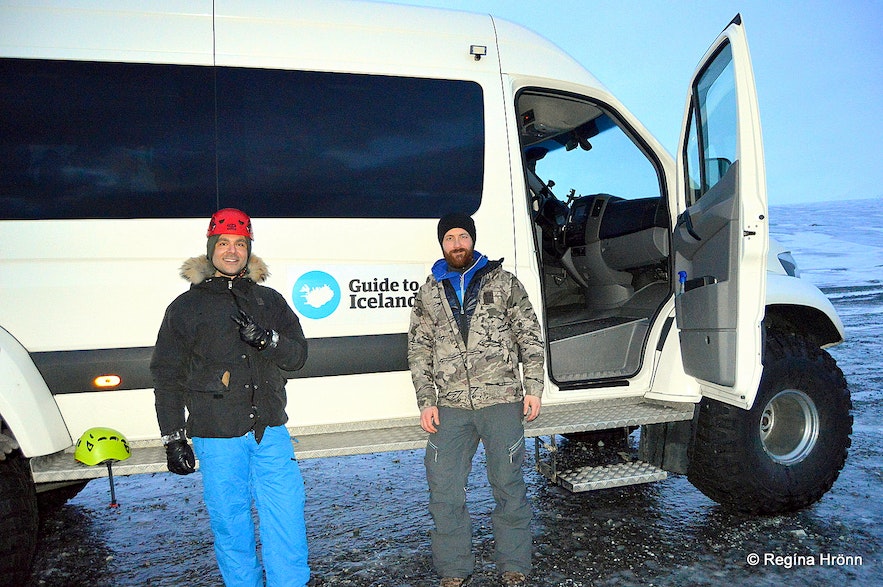 On the way to the ice cave

In my photo above you can see the specially modified vehicle which transported us to the ice cave. In the photo to the left is Ingólfur, the COO of Guide to Iceland, and Kolbeinn, our glacier guide.

We were given a safety helmet and crampons for walking on the ice. These ice caves, although so extremely beautiful, can be dangerous and should never be entered without a glacier guide and proper safety gear. Wear a thin cap so you can wear it with the helmet.

When we entered the ice cave the beauty of it just took my breath away. I and the rest of the group turned into kids, playing in the snow and touching this blue ice that formed an ice dome above our heads. 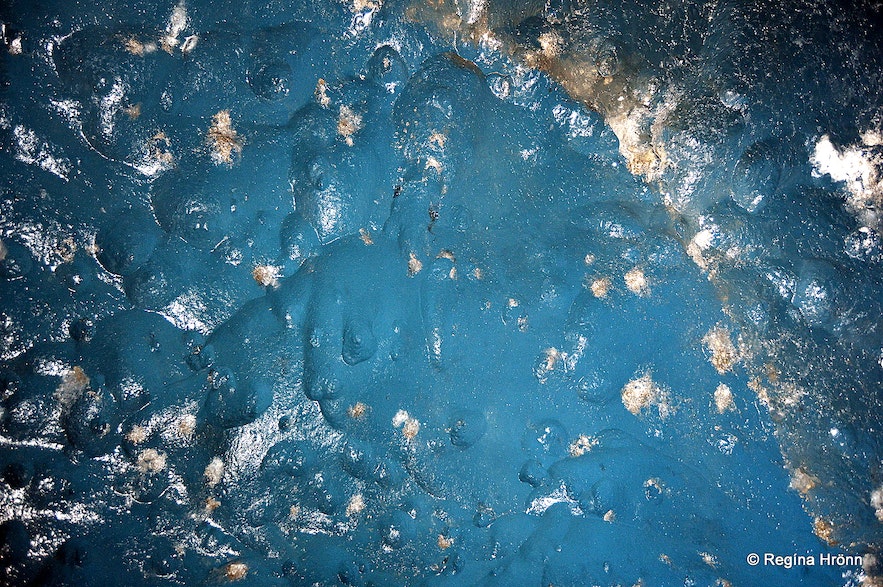 I can tell you that one can get quite emotional inside the ice caves as the beauty is just overwhelming. And I have heard of glacier guides, who get so emotional, that they have started crying when they see the beauty of a new ice cave.

The ice cave is big and further inside the cave, away from the light, the ice turned into a sapphire blue wonderland! With ice sculptures and icicles hanging from the ceiling! 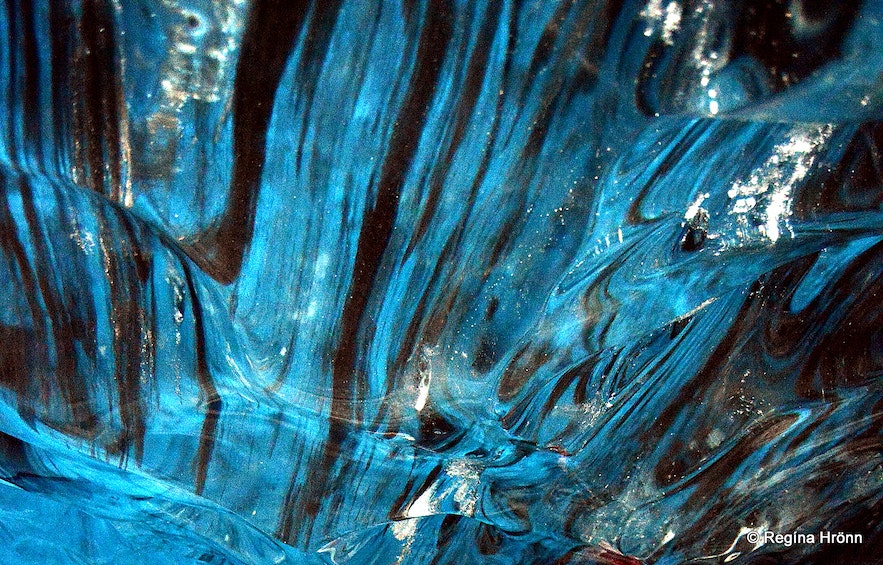 We were totally emerged in this beautiful blue colour and all of us were taking photos left and right. I had been worried about not having enough light inside the ice caves for my photos to turn out right and had been reading up on which camera settings would be the best for taking photos inside ice caves.

But once inside the caves I just left it up to the camera and shot the photos on the auto setting and used flash.

And I was praying for my photos to be able to capture this beauty and not come out all blurred or in the wrong colour. 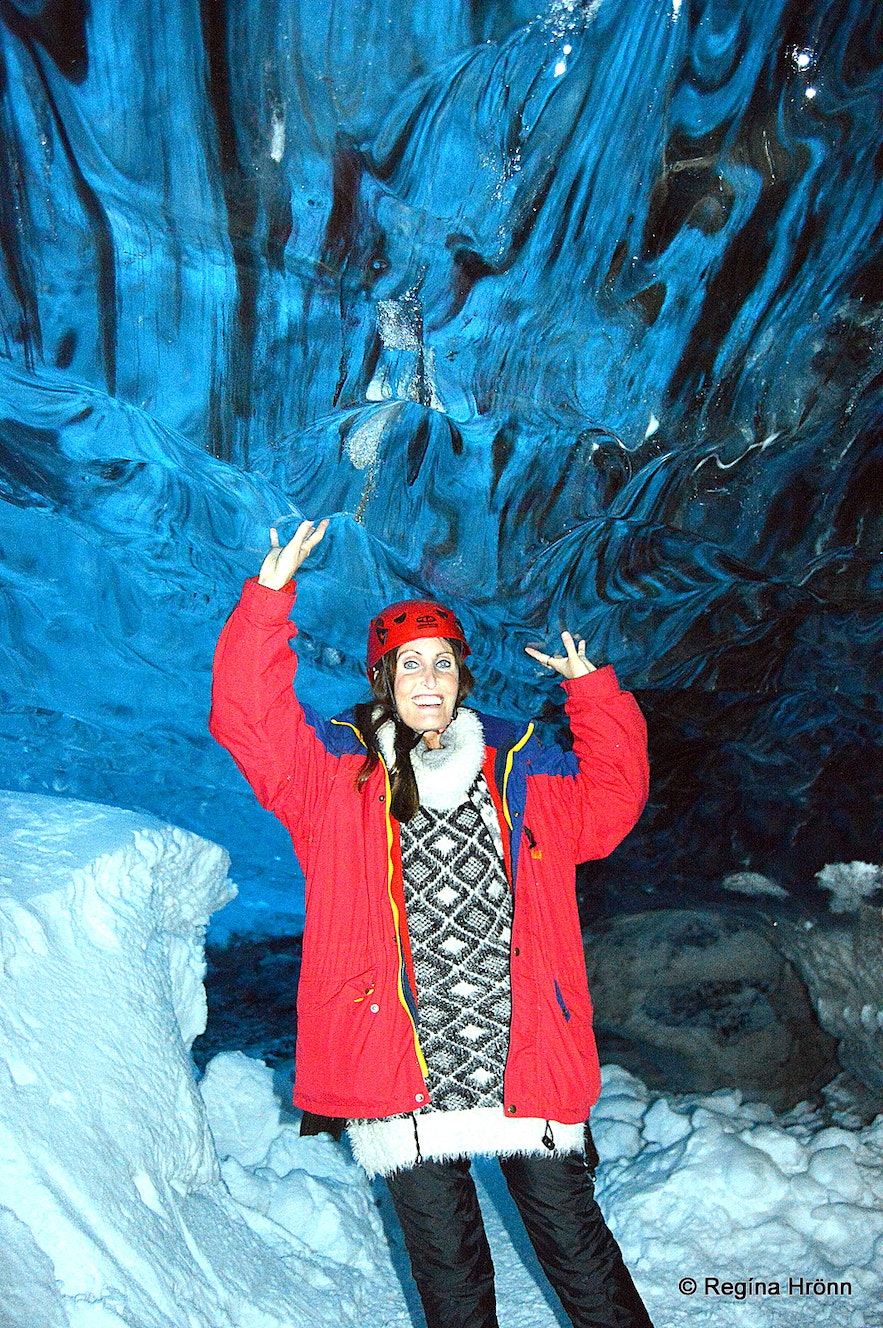 I think the photos came out beautifully and justly show all these extraordinary blue colours inside the ice cave. One of the photos looks like I shot a painted wall, but it is blue ice on one of the ice cave walls.

The photos above and below are of very old blue ice with black ash stripes from volcanic eruptions in Iceland. The blue ice you see inside the cave might be 900 years old!

Isn't this just breathtaking!! I had quite a few WOW moments inside this extraordinary beautiful ice cave.

We spent half an hour inside the cave and when we left I felt elated - this is such a unique experience.

This crystal ice cave tour is by far the most popular ice cave tour and it is almost always sold out. If you want to book a tour of this ice cave then don't wait too long as it might be sold out. I was helping a small group of Chinese people with their itinerary and suggested to them a visit to the ice caves.

They, unfortunately, waited a couple of days before booking and by then this tour was sold out. I felt for them as they really wanted to see this ice cave. 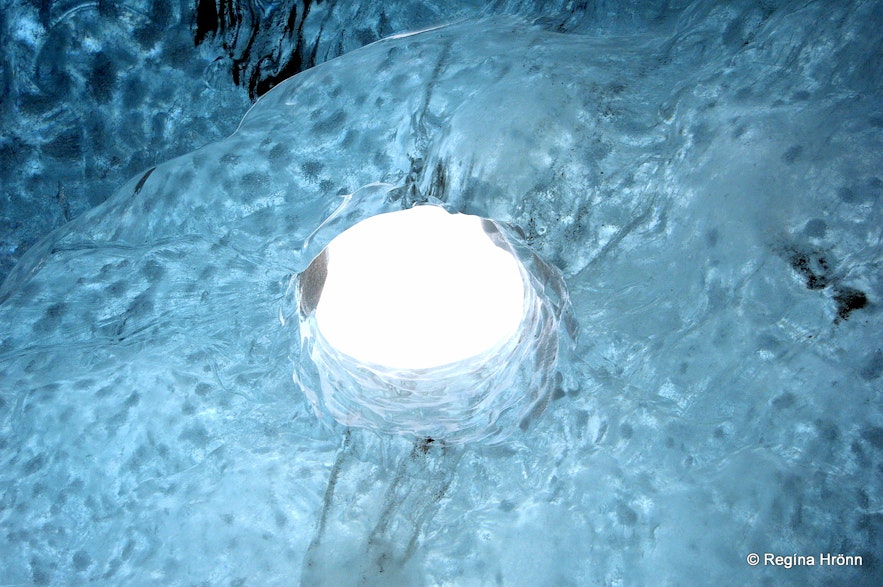 Inside the ice cave - a hole in the ceiling

There is only a limited number of people who are allowed into the ice cave per day, so it is unfortunately not possible to add an extra tour. Take into account that the ice caves can get crowded nowadays, as there is so much demand for seeing them.

These ice caves form in the summertime when water runs underneath the glacier and every winter when it starts getting colder the glacier guides look for new ice caves in Vatnajökull glacier. Fortunately, this ice cave was located relatively close to ring-road 1. 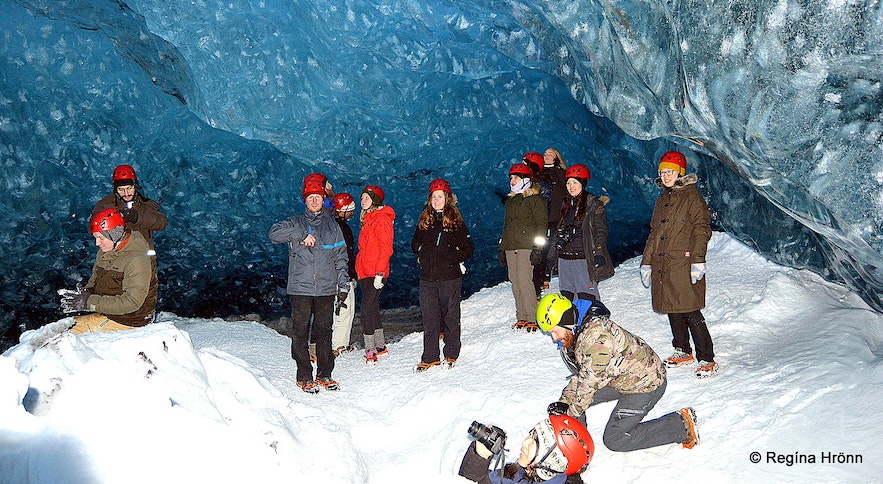 These natural ice caves are rare and as I said earlier, then we are very excited when a glacier guide finds a new naturally formed ice cave. But nature is unpredictable and the glaciers are constantly moving and shrinking.

So one never knows where the ice caves will be located each winter. That said, then seeing that the glaciers are shrinking then more and more ice caves are discovered. 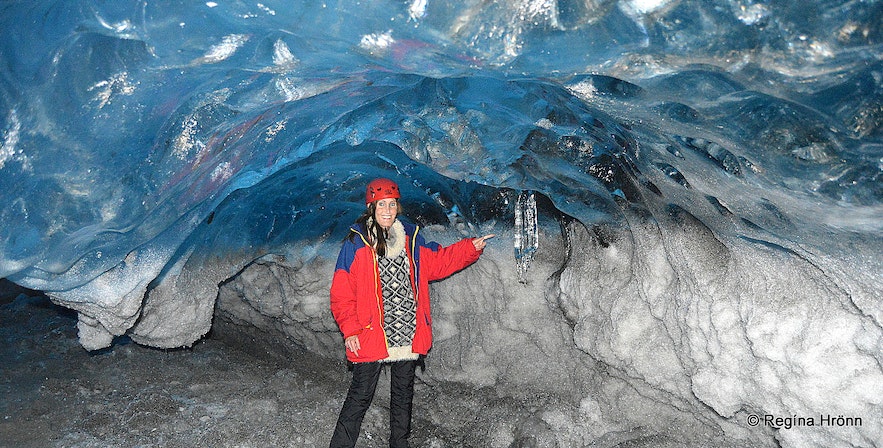 Inside the ice cave in Breiðamerkurjökull

Here you can check out the top ice cave tours and lava trips in Iceland. An added bonus to visiting Iceland in the wintertime is that beautiful Northern lights can frequently be spotted.

Dress warmly and wear sturdy shoes for the ice caves. The ice caves can only be visited in the wintertime for 5 months from November until the end of March when it is cold enough and safe to enter them. 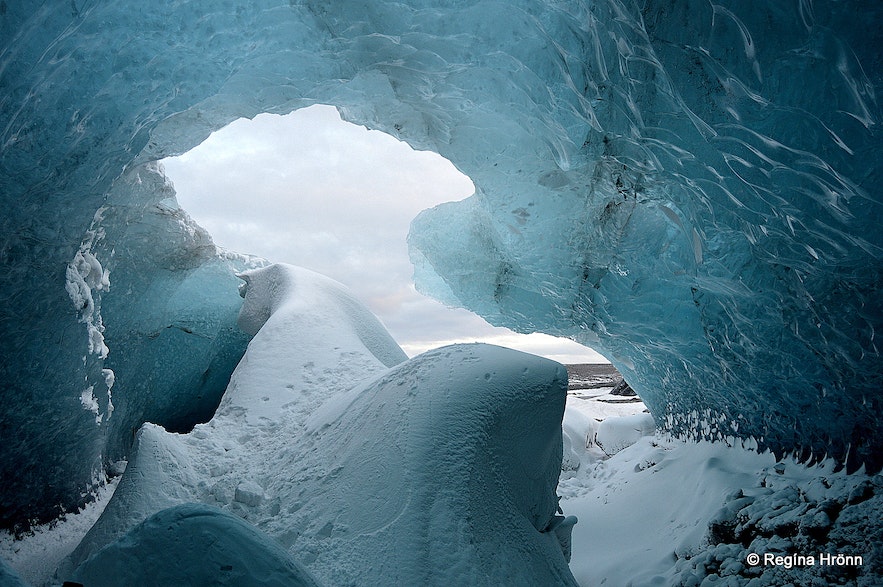 The entrance to the ice cave

The ice cave I visited was called Crystal, but the ice caves collapse in the summertime and new ones are found. Crystal didn't form in this location again but close by another ice cave formed which was called the Black Diamond.

I visited this cave in 2021. There is more ash in this cave which creates this black colour when it is trapped inside the ice. Very beautiful.

Another beautiful ice cave formed on the east side of the Jökulsárlón glacial lagoon - it got the name the Sapphire ice cave.

I visited Sapphire in 2021 and it is breathtakingly beautiful. The blue colour reminded me of the cave I visited when I wrote this travel-blog which I wrote before they named the new ice cave Sapphire. It has got the most amazing blue colour, more aquamarine though than sapphire.

But of course, these caves change every year. 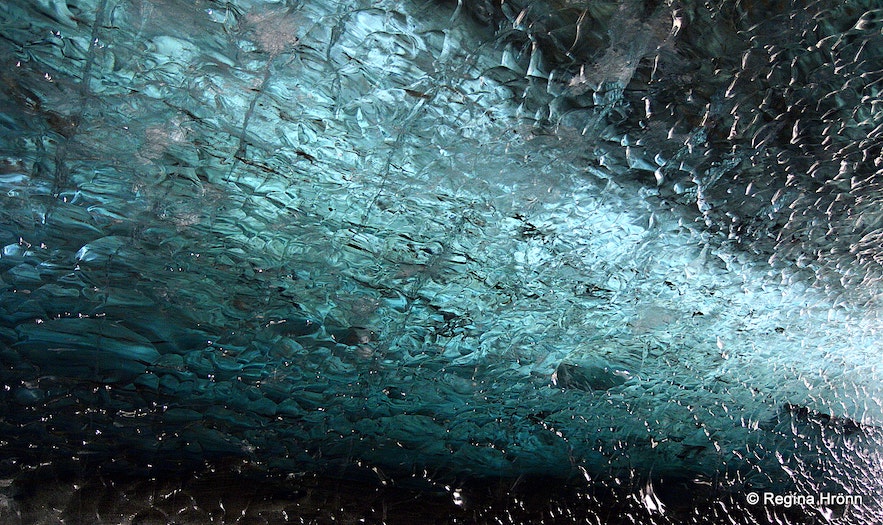 Jökulsárlón glacial lagoon is located some 390 km east of Reykjavík in southeast Iceland or 375 km depending on from where you start your journey in Reykjavík city.

Also, check out the Katla Ice Cave Tour | Departure from Reykjavík which is an ice cave open all year round.

Have a lovely time visiting the ice caves :)