This July I took my daughter for an adventure trip. She's eight years old and we set a few goals for our trip. We'd play chess in a beautiful place, we'd bathe in geothermal pools, we'd discover places we didn't know about and we'd search for a few geocaches.

Geocache is a game of sorts. It's a community driven treasure hunt where interested people hide and maintain so called caches in places all around the world. The idea is that searching for those caches will lead you to places of interest, and for loot of course!

We headed out before noon, stopped to buy groceries and then headed for Laugarvatn for our first pitstop, lunch at Best Burgers. From there we briefly stopped at Geysir in Haukadalur (to see Strokkur erupt) and by Gullfoss. - I'll confess, I usually don't recommend people going because it's very hyped and popular, but the times I do go myself I actually end up bewildered and amazed, perhaps no less by the fact those wonders are in my backyard. It's easy to do a day tour there, so why not just recommend it? Here's a link to a very affordable tour. It's easy to do, so really great to do with children and your granny.

Gullfoss is, in fact, at the south end of Kjalvegur, which happens to be the road we decided to take.

The road is a very rough gravel road, and while it's doable do drive it on a small car, the car will take a beating and is NOT covered by the rental insurance. If you decide to take this path, please make sure to choose a car that's rated for the road.

The road takes you over Kjölur, in between two large glaciers, Langjökull and Hofsvallajökull, over a barren landscape that, sometimes reminds me of the photos the Curiosity Rover has been sending from Mars. 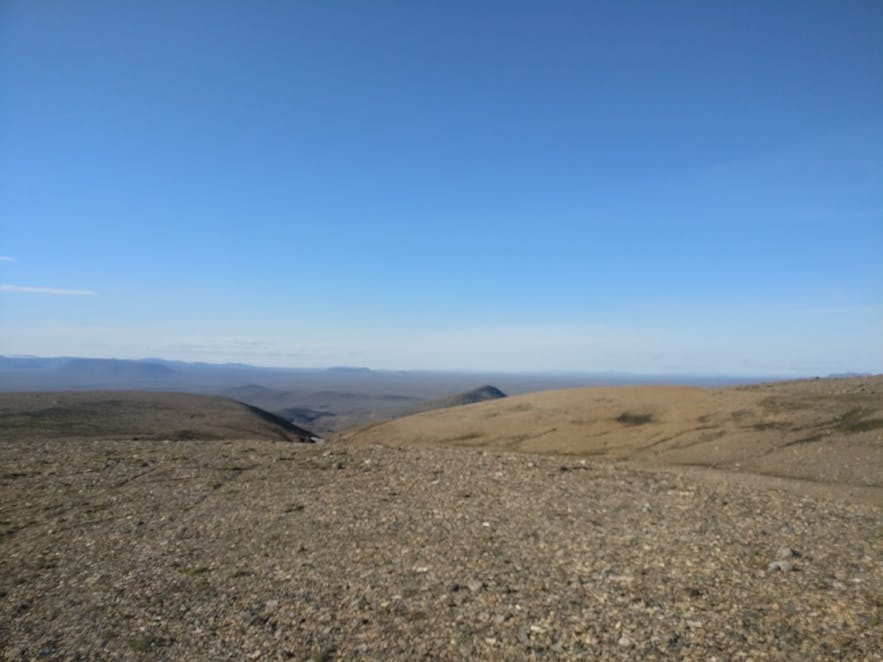 Me and my daughter didn't go into Kerlingafjöll during this particular tour, but that's a place I'd still highly recommend. It's easy to visit on a rental 4x4 in the summertime, but during the wintermonths the road is closed (for a good reason). However, there are premium tours available, such as this one here, that take you into the wild winter wonderland. While pricey, I can't even begin to state how awesome it is to visit that part of the country in the winter.

As we drove over Kjölur, we made a few stops to search for geocaches. They were small finds, but searching for them brought us closer to the history of the location and made us take walks in the desert we had not anticipated.

Enter: A ghost story with consequences

We spent the night in the highlands and as we tucked in, close to midnight, feeling the light breeze move our tent I read a few ghost stories for my daughter. One of which was the story of Ábæjarskotta. Long story short, it's about a ghost tucked away in a bone, given the assignment of making a rival neighbour mad, but ending up making everyone mad and bringing the farms in question to ruins.

She took this story to heart and was very curious about the location, and to our surprise, as we planned our trip the morning after, we realized that the location of the supposedly abandoned farm was not so far away, and it hid a geocache.

But first we need to take a bath

We made a pit stop in Hveravellir to bathe. The name of the place literally means "hot-spring fields" and it has a small pool that the hot springs well into and people bathe in it. It's incredibly warm and cosy, and usually has some pretty good people to chat with too. My daughter is especially adept at making aquaintances, so she had a delightful time (until I had to drag her out of the tub). 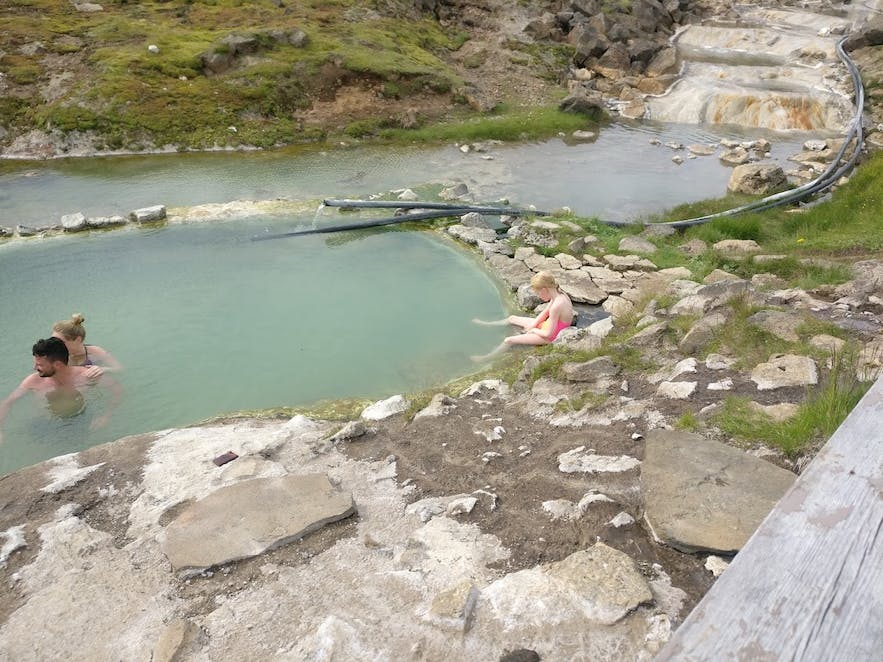 After the bath we kept on. We got safely out of the highlands and drove through the fruitful lands of Skagafjörður in the north. At this point we realized that Ábær, while literally speaking relatively close, was actually a pretty long drive away. But we were on a mission.

The road towards Ábær began as a great asphalt road. At this point in time I figured that Ábær probably was actually not deserted. The asphalt then disappeared, the gravel got worse, we started a steep climb into the mountains, along steep hills with precarious cliffs below us. The gravel got worse, the roads got tighter, our pace was at a trott. That's when we saw the bridge we were meant to pass. My heart sank, surely my daughter would grow up without a father if I'd attempt to drive over this.

There was a weight limit for the bridge, my car was just light enough for it... I told kiddo to exit the car while I drove over it, very carefully. 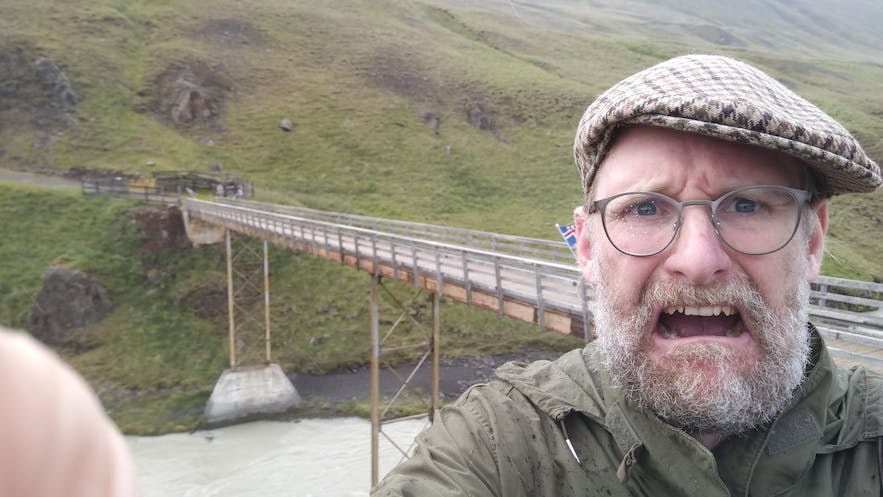 I'll admit I was stressed. Be advised though, that stress is a good thing when driving or traveling in Iceland. You've got to be very careful, the conditions can be much worse than they look at first.

Once over the bridge we drove off the gravel on to an even narrover path, hardly described as a road. With regular intervals of 30 degree climbs and descents, twists and turns, deep holes to be wary of and a long, steep hill at our side. My daughter didn't even close her eyes for a second, describing the path as taunts and puzzles thrown at us by the ghost at Ábær.

Eventually we made it, and sure enough, it was deserted. Deserted and gorgeous. The ruins of the old turf house clearly visible and accessible at the top of a hill, and the only structure kept maintained in the area was a tiny little church. This deep in the valley Austurdalur, it was easy to see how this became the scene for a terrifying ghost story. 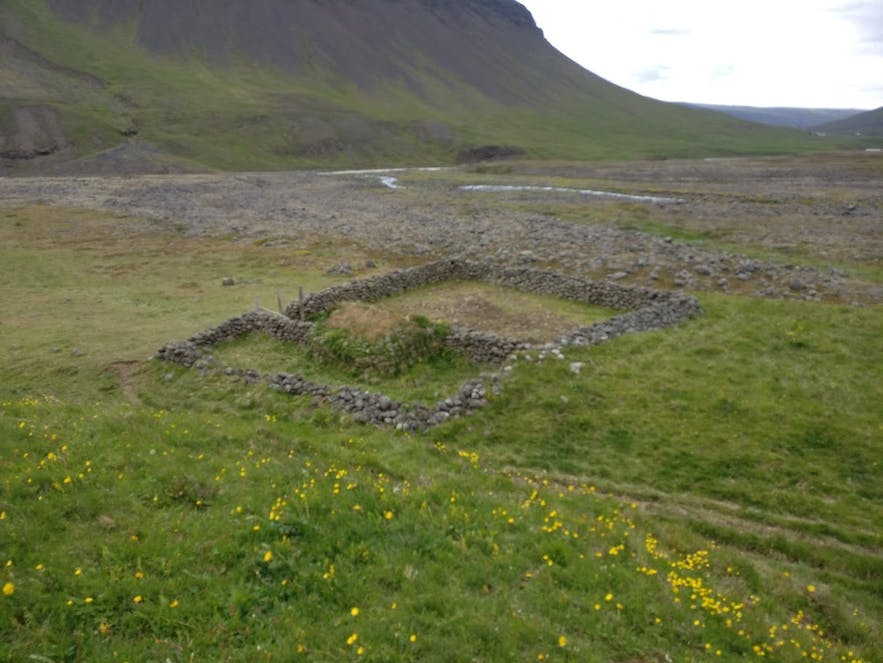 We made some hot chocolate, found a nice spot by the river and played a couple of games of chess. And on the way back we found the geocache of course.

We didn't need another bath, but...

On our way back to the ringroad up north we couldn't help but drop by at another natural pool called Fossalaug. It's a short walk from a place where we were able to park our car and sits right above a large waterfall. There's a tiny little hot spring that drips into the pool and keeps it warm. It's quite dirty, but extremely pleasant given the location. 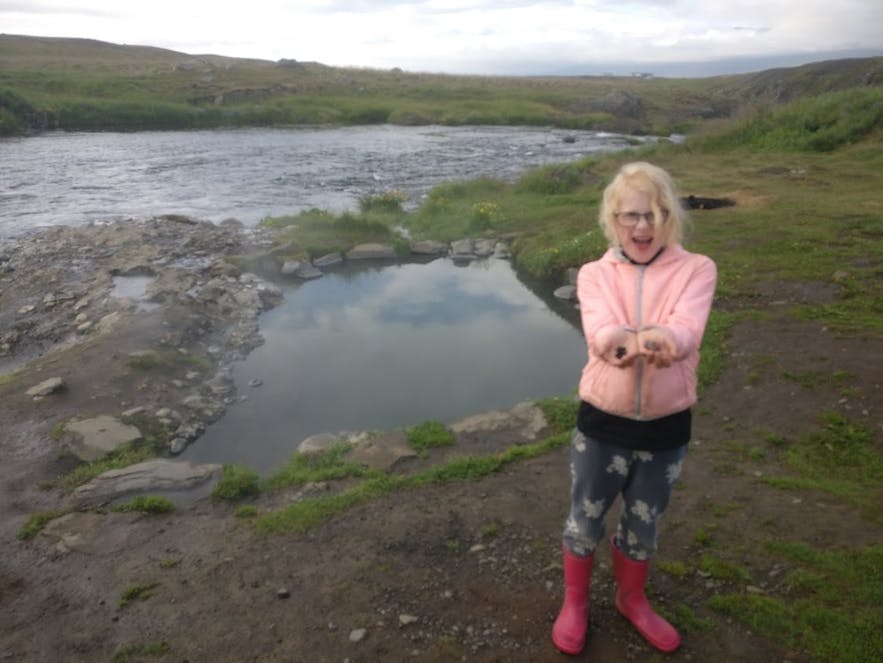 So that's where our little adventure drive ended and after that we took to meeting friends and family up north. The most mundane trips in Iceland can be turned into amazing voyages given the right equipment.

If you are feeling adventurous though, make sure to get a good car. There's plenty of rentals that will equip you with what you need. Please contact me if you need some advice or suggestions.