A Local's Guide to the Secluded Flatey Island

My family hails from the little island of Flatey on Breiðafjörður Bay. My grandfather was born and raised there, and we still own the house in which he was born.

Flatey is definitely my favourite place in Iceland. The houses on this remote island were built over a hundred years ago and are so well preserved that when you step off the ferry at Flatey, it feels like you are stepping back in time. When you walk the short distance from the pier to the centre of the village, you are greeted by sheep, chickens and the only dog on the island. It is fantastic.

Flatey is really desolated, only two farmers spend the entire year there. The rest of us only come and visit for longer or shorter periods of time. Most come during the summer months as there are fewer ferry rides in the winter and the only hotel on the island is closed. The island also gets incredibly dark, and there are no people to clear away snow.

I’ve been there once during the winter months. It is really hard to imagine how people could survive the long, dark winters on this isolated island. My grandfather told me how afraid he was as a child of ghost and sea monsters, understandable when you are there in November, and you can’t see what is lurking in the night.

I say that I try to visit every summer, but the truth is I haven’t been there in years. I don’t know why, maybe because the Icelandic summer is short and before you know it, it’s September and school, work and life takes over. Perhaps it’s because I don’t own a car, so getting to Stykkishólmur, from where the ferry departs, takes planning, and I am not good at that.

Actually, that’s not it. The real reason I haven’t been there is that this was my mother’s absolute favourite place. She could spend days even weeks there, completely alone, surrounded by nothing but the rich birdlife of the island. She’d read every book in my grandfather’s house and stay out til midnight in the eternal summer sun. I haven’t been there since she passed and I was afraid it would be too sad.

However, I felt that I should go this year. I missed the island; I missed scenery out of the kitchen window of the ocean and the Westfjords; I missed the island-noises of waves crashing on the shore, sheep bleating and Arctic terns squawking. I missed the calm, carefree vibe of the whole island, where you feel like nothing outside this 0.5 square km piece of land matters.

The view from my kitchen window in Flatey

My summer had been a bit crazy; I had started a new job where I got to ride a snowmobile and a helicopter (!!!), I produced a radio show, starred in a theatre production, and I was writing my Master’s thesis. I needed some chill-time on the island where I spent most of my summers as a child. So in late August, I packed a bag, borrowed my sister’s car and drove off to Stykkishólmur with my boyfriend.

We started our journey from Reykjavík at 6 in the morning, driving north to Snæfellsnes Peninsula where we found the town of Stykkishólmur. We got there just before 9:00 and went straight to the ferry which is called Baldur.

I wanted to stay out on the deck the entire way; I wanted to look out to the ocean and try and spot whales. I knew seeing these giants would be highly unlikely, but there is still a better chance spotting them when you are outside than inside. However, it was really cold outside, and my boyfriend was freezing. Inside was nice, we cracked open a beer (that’s allowed when you are on holiday) and had the best french fries I’ve ever had from the onboard restaurant.

Baldur acts as a shortcut from Snæfellsnes to the Westfjords, only making a quick stop in Flatey. On my journey, most passengers were heading to the remote fjords so when we disembarked, they were all on the deck, trying to catch a glimpse of the quaint old houses. 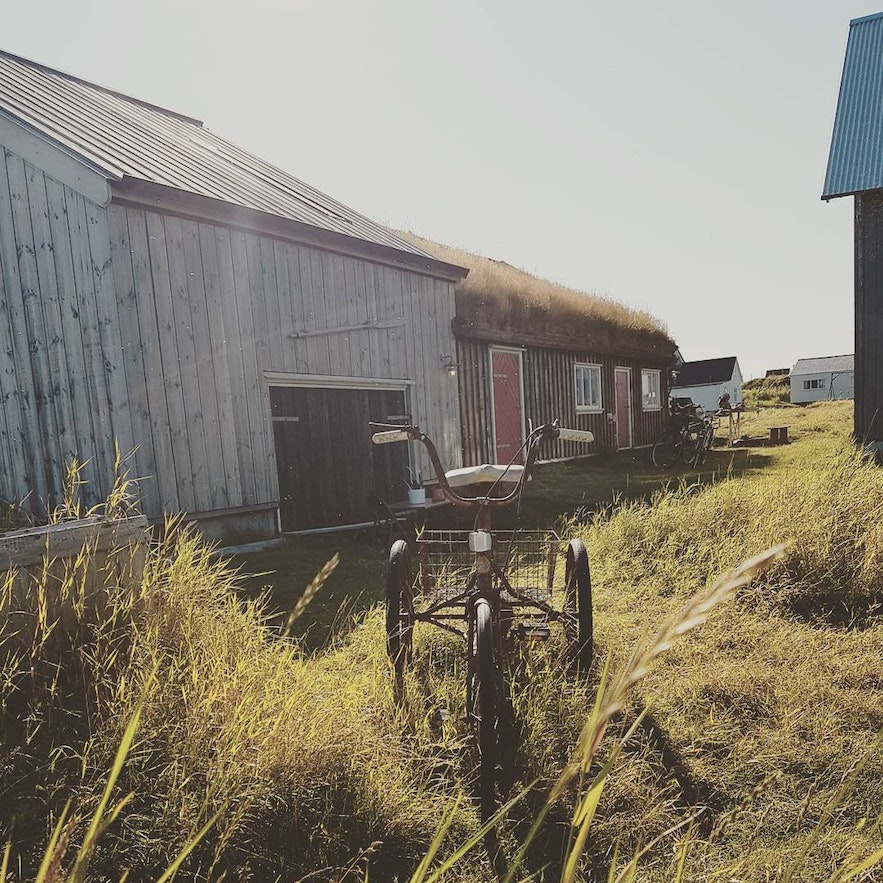 On the dock, we were greeted by Magnús, one of the two farmers on the island, and his adorable dog. The walk from the pier to the central village is short, but when you are hauling your luggage and all the food you are planning to eat (there are no shops on the island), it can seem much longer. Magnús is kind enough to drive your luggage on his tractor to your house for a small fee.

The short hike from the pier takes you past Flatey’s most photographed beach, Grýluvogur, a roadstead where boats lie safely at anchor without dragging or snatching. When the tide is low, children play there, searching for seashells, crabs and jellyfish. 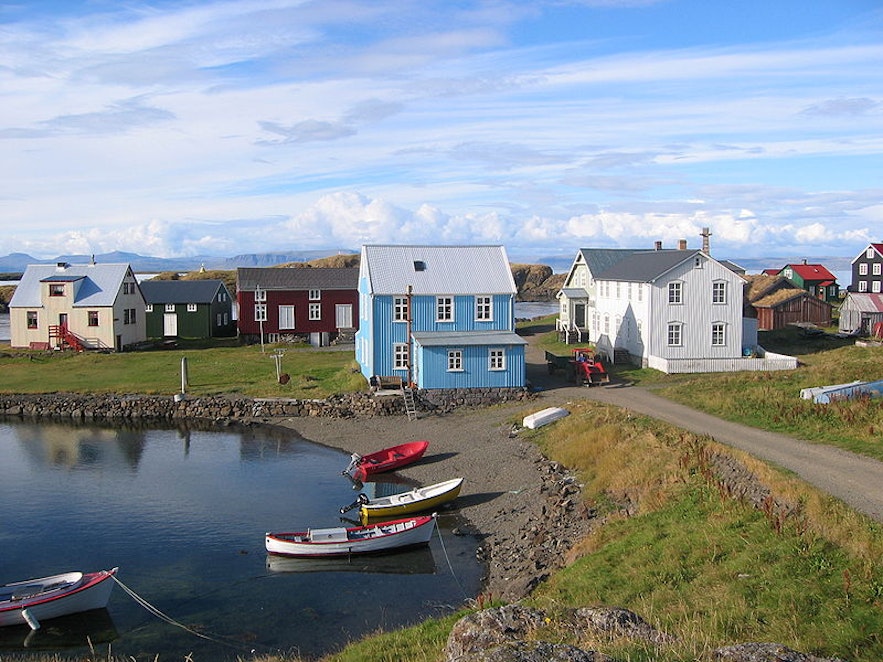 I've been to Flatey so often, but I don't have a picture of the famed Grýluvogur. This is from Kolbrún Ragna, Wikimedia Creative Commons

Birdlife and Dangers of Flatey 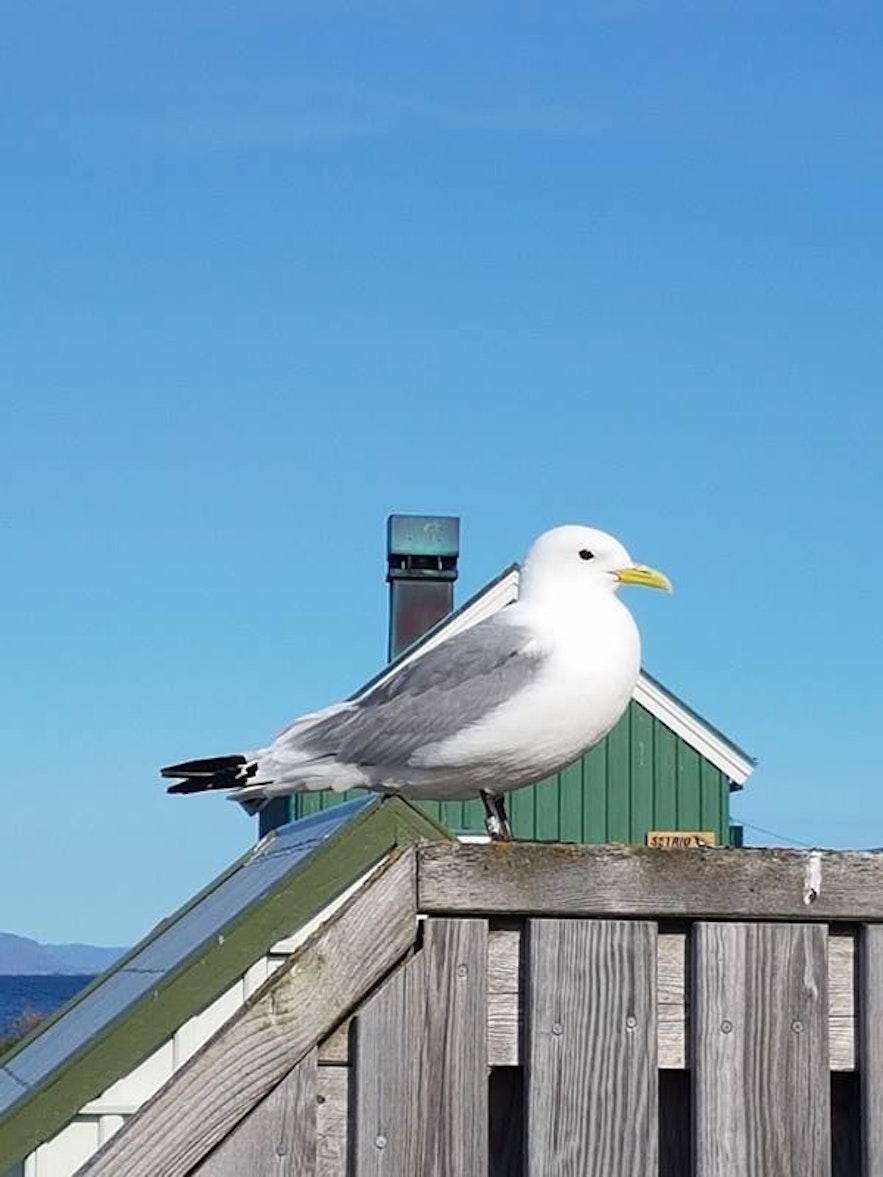 The Icelandic Gull visiting my porch

Once we settled in at my grandfather’s old house, we decided to walk around the island. Encircling the whole island doesn’t take all that long, it is such a tiny place. However, we ran into a bit of trouble.

Flatey has a very rich birdlife. My favourite bird there is the delightful Atlantic Puffin. Sadly, I was there too late in the summer; the puffins had all left. In May, June and July, I would just have to look out of the kitchen window to see these cute fluffballs but, as with all puffins in Iceland, they leave the country in August. 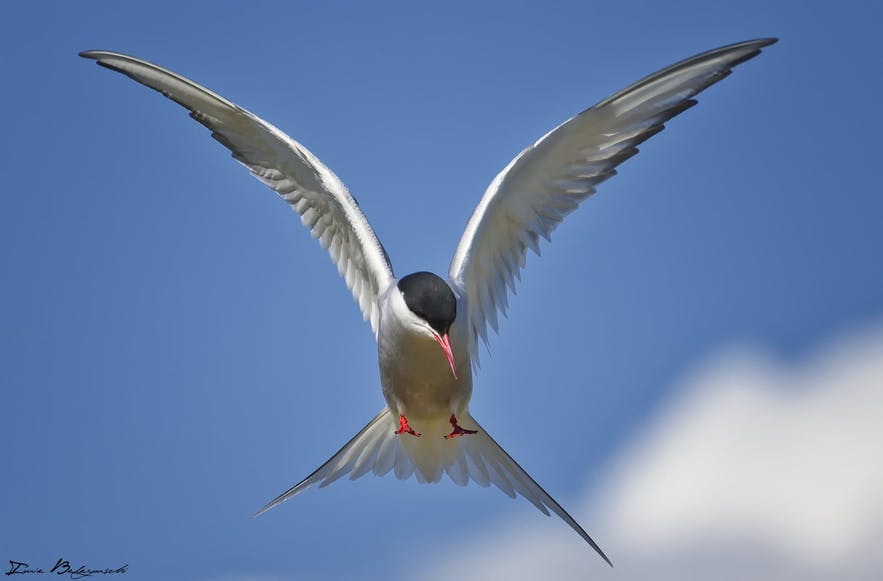 Arctic Tern. Photo from Guide to Iceland's Iurie Belegurschi because I forgot to take a photo of a tern

The problem with Flatey is that aside from the very few houses, the island is pure wilderness. This means that if you try to venture away from the village centre, you are in Arctic tern territory. No matter where you go, you’ll be too close to a nest according to the terns.

When my boyfriend and I tried to encircle the island on our first day, we only got a short distance from the main path when we spotted a bird standing on a rock. It was white, but with a grey head, so I figured it was like a teenage tern. It stood there all alone, squawking oh-so-sweetly and so I reached for my camera to take a picture of it.

That is when I realised it was calling out for his mother, who was not happy to see us standing so close to her baby. The tern flew over us and took a nosedive down, aiming its bright red beak at our heads. We ran away in a panic. It was both terrifying and adorable. 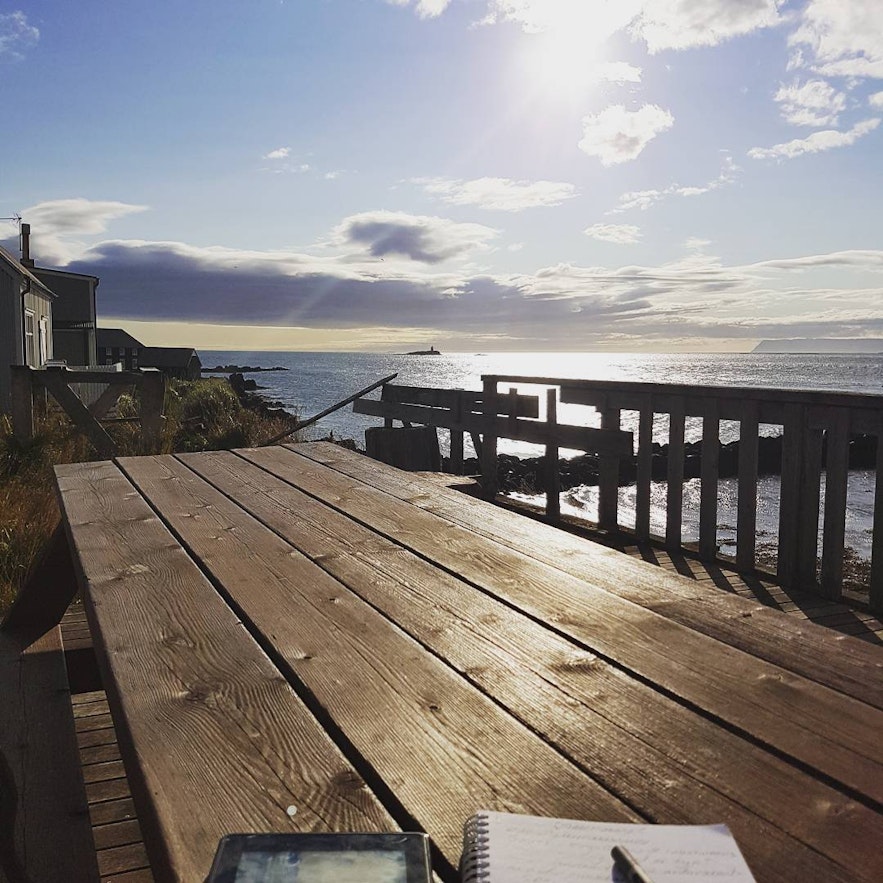 The best view when you are studying. At far right, you can see the Westfjords.

We decided to spend the rest of the day relaxing at our house. I was still writing my thesis, so instead of exploring the island, I studied. I had been cooped up in various libraries around Reykjavík this summer so studying with the view of the ocean and the Westfjords in the distance was a welcomed change. 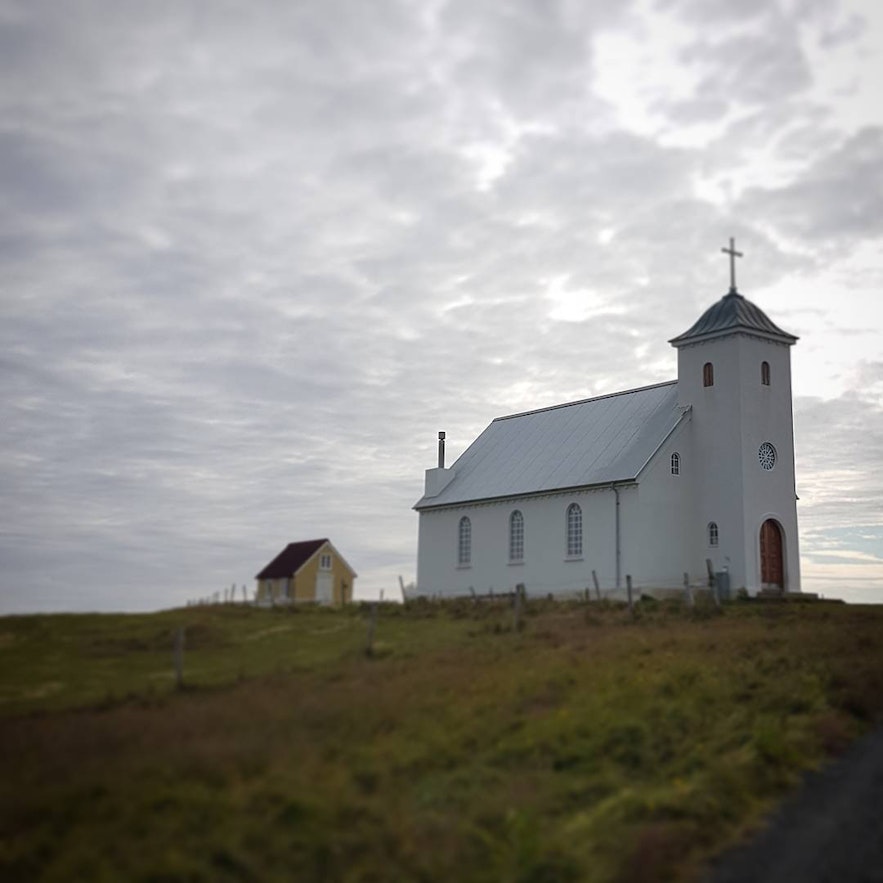 The next day I couldn’t study; had writer’s block. To try and remove it, I decided to visit the oldest and smallest library in Iceland; the Flatey library. Yes, there are no shops on the island, but Iceland is a nation of book lovers, so there is a library.

The Flatey library was built in 1864 but was moved a few metres east in 1925 to make way for the church. The tiny timber house is 4.75 metres long, 3.43 metres wide and is a fully functional library where you can check out books. I’d say that there are around 100 books there, not a lot but still quite good for an island of only two permanent residents. 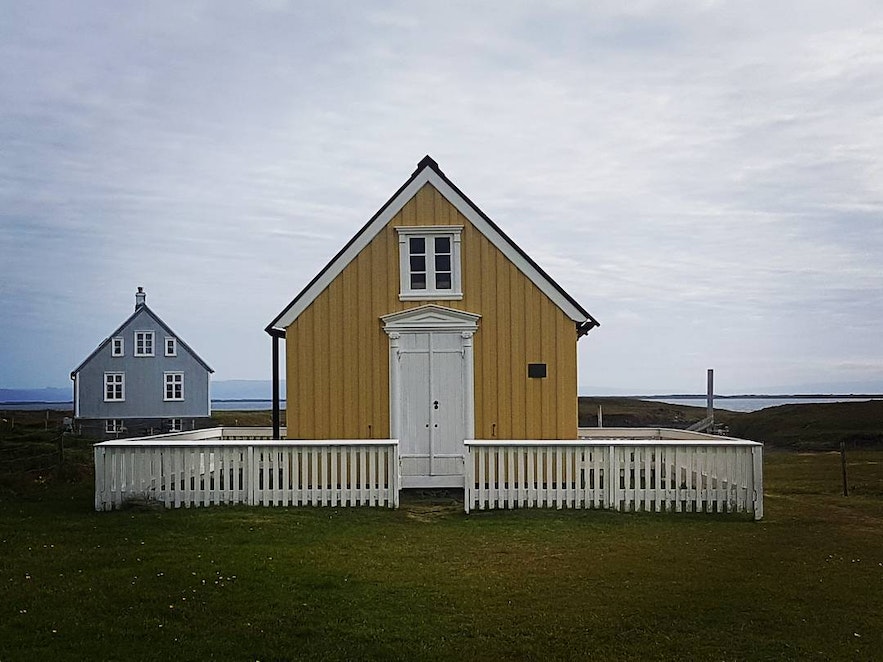 The church next door is also worth a visit. Its main attraction is the ceiling mural painted by artists Baltasar and Kristjana Samper. Above the altar is a large depiction of Jesus, wearing a traditional Icelandic woolly sweater. The scenery depicts the landscape of Flatey, and the people seen in the mural were all residents of the island. 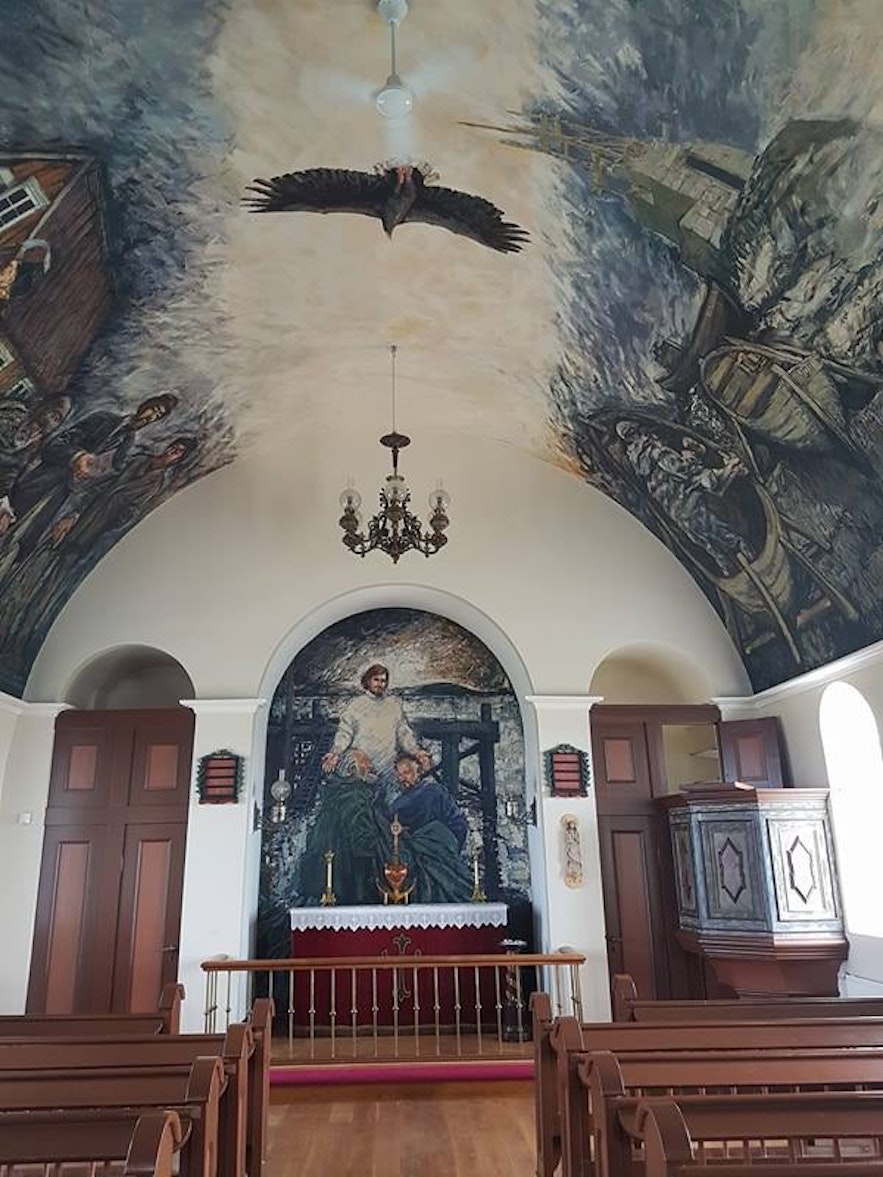 Jesus in a woolly sweater

Close by is the Flatey cemetery. I’m pretty sure I’m not the only one who likes visiting cemeteries; it’s another way to look at history, and you get a glimpse at how different life used to be.

At the Flatey cemetery, there are many headstones of fishermen that have lost their life at sea. I remember one, where a woman had lost both her husband and son on one fateful night. You’ll see the year the Spanish flu came to the island as there are headstones with entire families that died just a few days apart. It’s heartbreaking, but you get a better understanding of how difficult the island life was just a century ago.

That night we went for drinks at the local bar. Yes, no shop in Flatey but there is a library and a bar, do you need anything else? 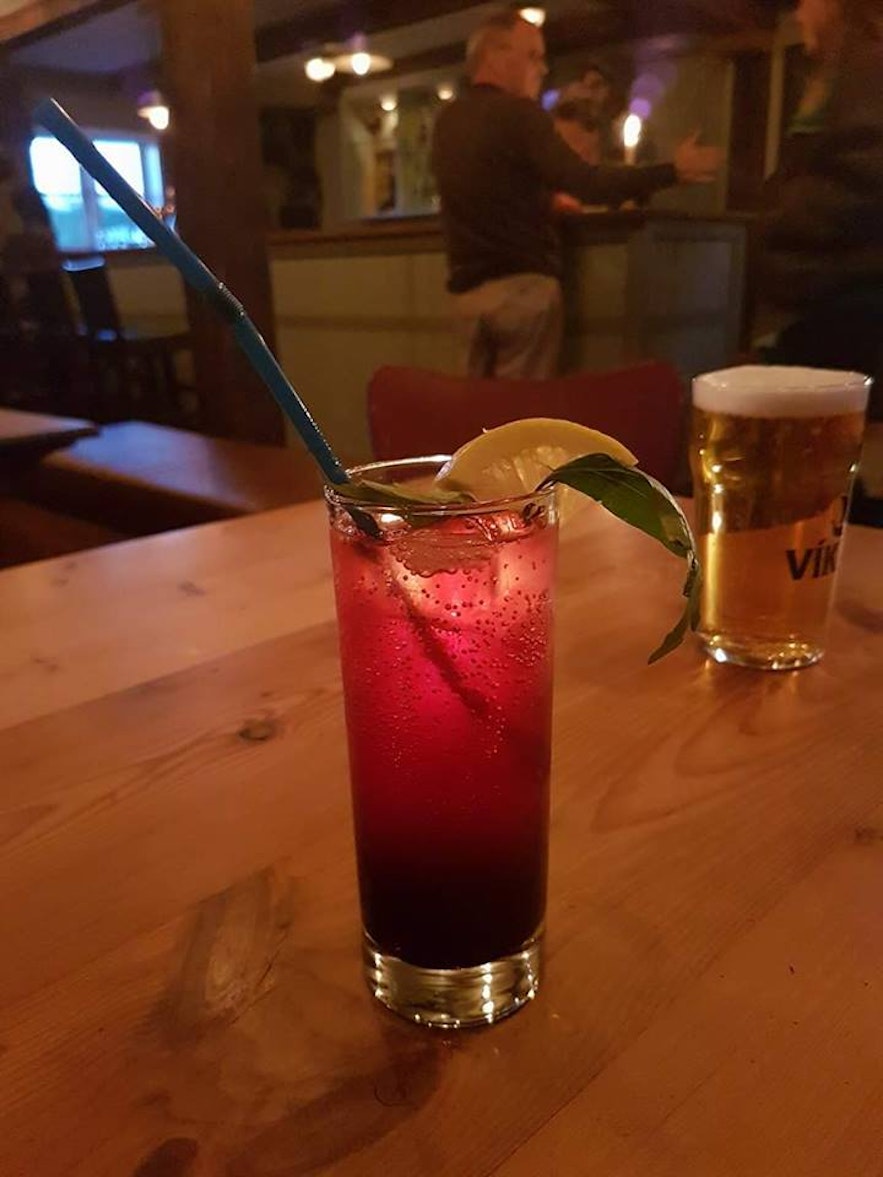 A very strong cocktail made from crowberries

You can’t visit Flatey without having (at least) one Flajito! What is Flajito you ask? Well, a few years back, Iceland was swept by a mojito craze. Everybody and their grandmother would order a mojito when they went to bars and clubs.

One night at Flatey’s bar, Saltkjallarinn, somebody ordered a mojito, apparently thinking that this remote island would have such exotic things as fresh mint and lime. Not wanting to ruin the mojito-lover’s night, the barmaid popped out to her garden and picked rhubarb and the herb lovage to replace the lime and mint. The outcome: The Flajito! A delicious rum drink flavoured with Icelandic nature.

Shipwrecks and ‘The Penis Man’ 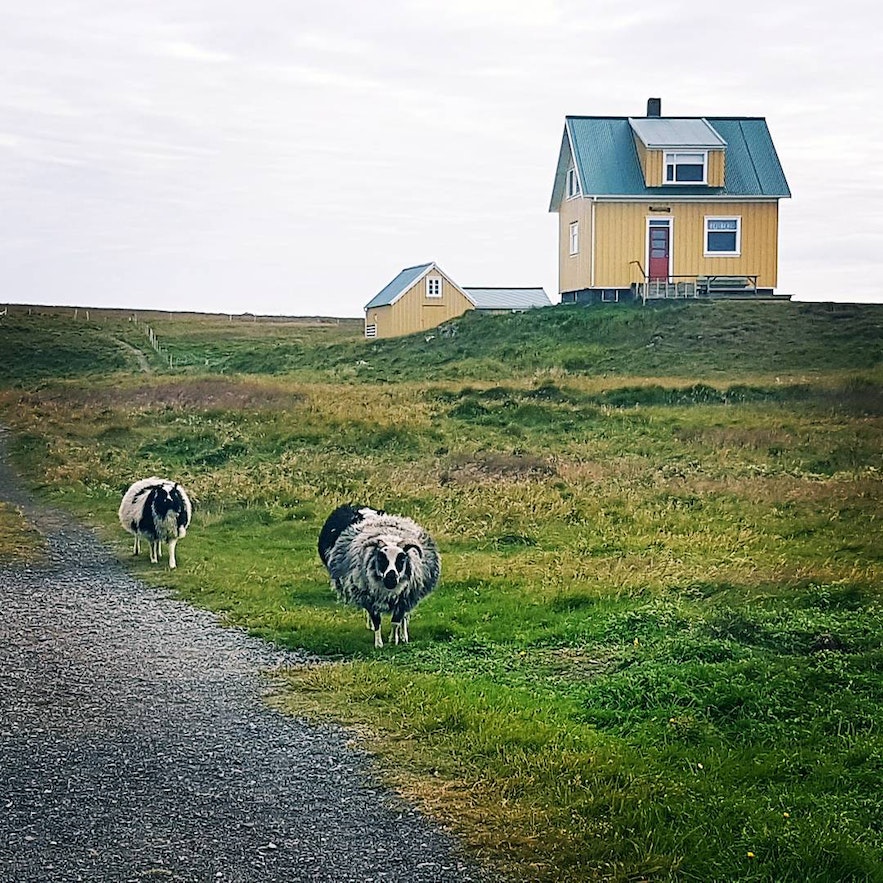 The next morning we decided to try again to venture past the terrifying terns and hike around the island. This time the teenage bird and its mama were nowhere to be found, so we managed to get to another must-see on Flatey; the idol of the fertility god Freyr.

Okay, I’ll admit it, this wooden man with a massive erection (hey, it’s a fertility god!) isn’t much to look at. But it is an art piece made from driftwood by acclaimed artist Jón Gunnar Árnason. It’s been on the island since 1973 and has even inspired a poetry book by poet and writer Guðbergur Bergsson. 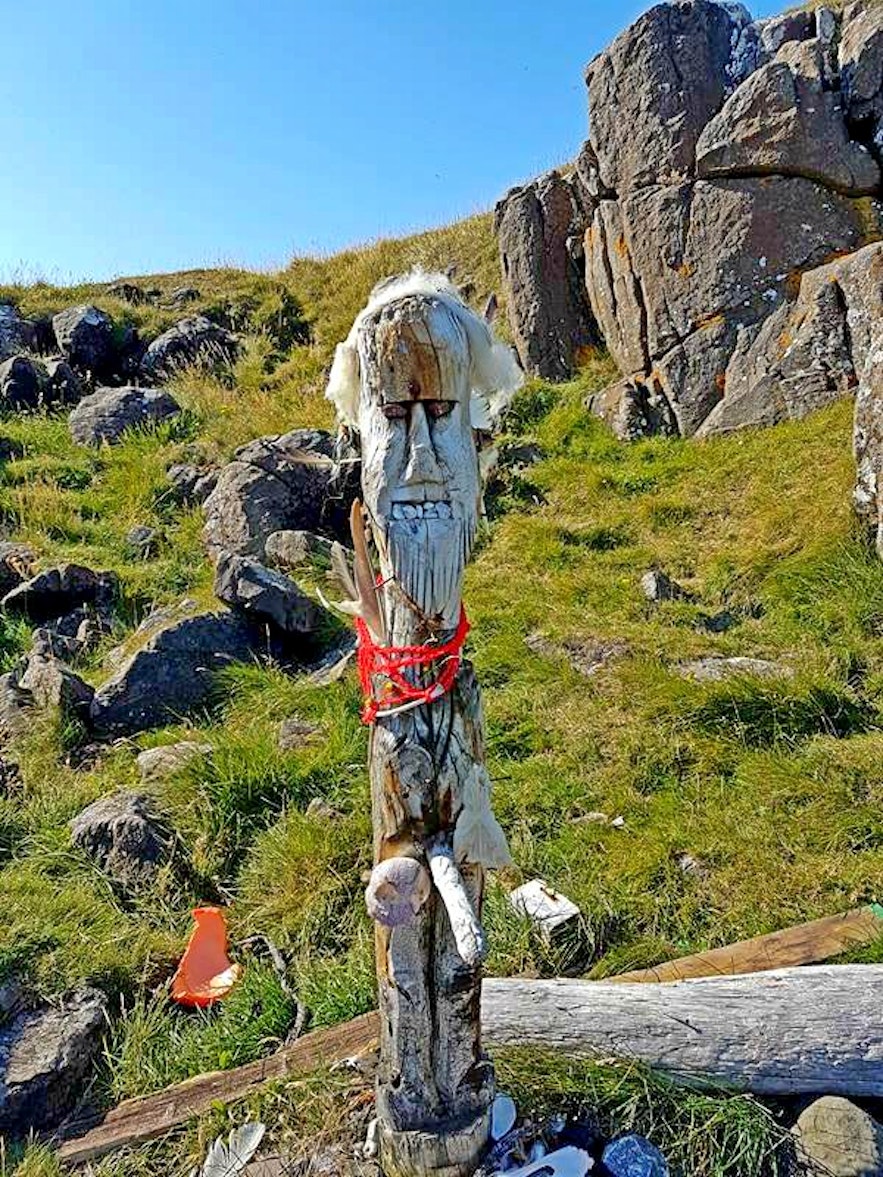 The wood sculpture is sometimes just called 'The Penis Man.'

Freyr is surrounded by seashells, flowers, unusual rocks, pieces of paper, and other trinkets that have been offered by visitors to the god in exchange for a fertile life. 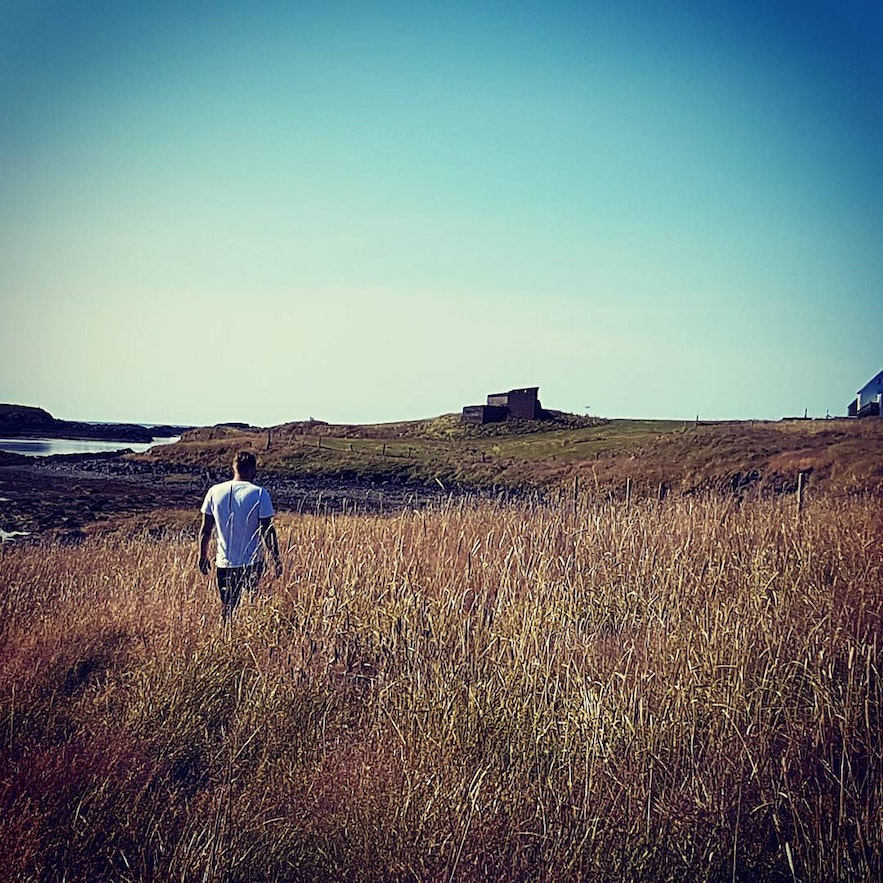 Also roaming free on the island was my boyfriend

At the other end of the island, we came across two derelict ships which have been left on the beach for the elements to wear away. The first ship was called ‘Gísli Magnússon SH 101’ and was built in Reykjavík in 1947. When the ship broke down in Stykkishólmur, it was shipped to Flatey island to rust away. 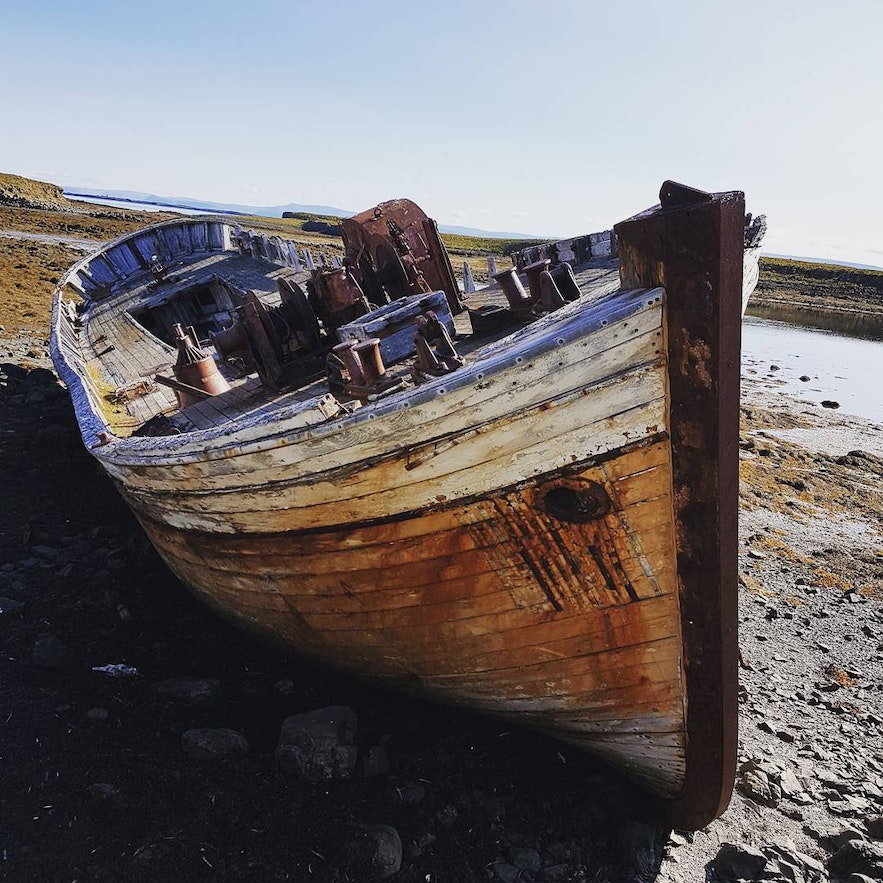 Not much is known about the second ship. As with most ships in Iceland, it must have been a promising fishing boat, but little remains of it as the weather has eroded it to just a skeleton. 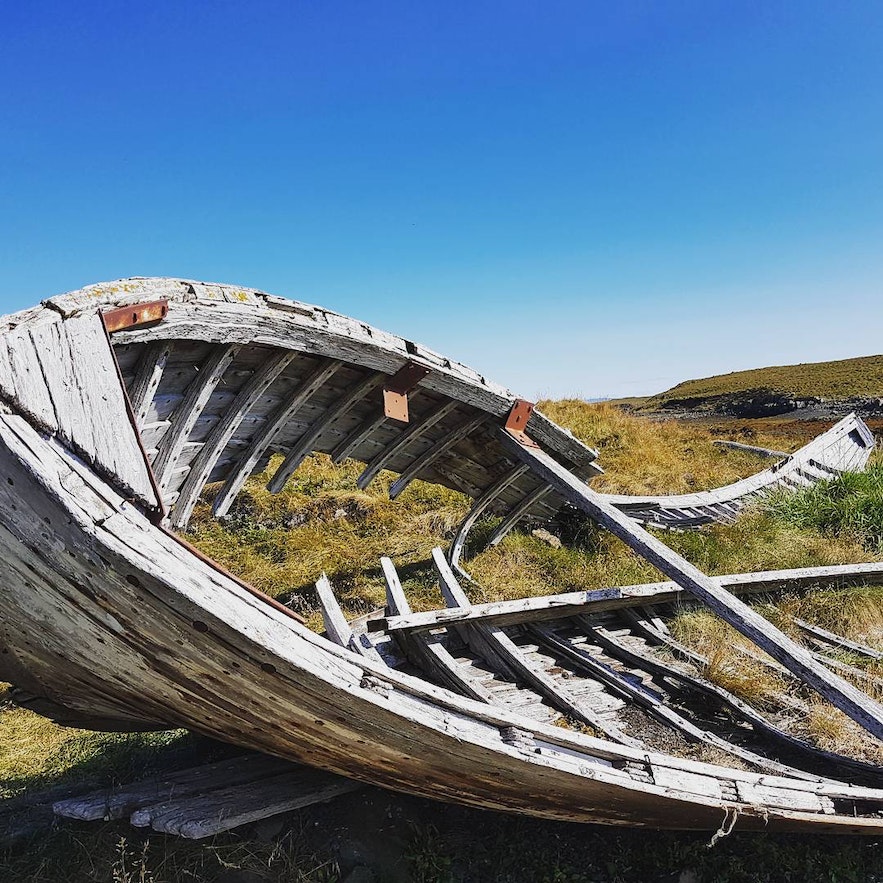 We forgot all about time on our hike, and when we came back to the village, we saw that the ferry Baldur was making its way towards the island from the Westfjords. We rushed to the house, grabbed our bags and made it just in time to catch the ferry back to Stykkishólmur.

We stood on the deck of Baldur and watched as this magical little island disappear as the ship sailed away towards Snæfellsjökull glacier. Next summer, I will come back to this enchanted island; to my mother's favourite place.