If you are looking for the perfect break from the constant wind, rain, snow, frost, or whatever this Icelandic weather is throwing at us at the moment, then check out the Reykjavík Folk Festival that starts this Thursday (the 1st of March).

Folk music has a very long history in Iceland, evolving from the rhymes of the old Viking Sagas. The songs were passed down from generation to generation and between friends, ultimately becoming an intricate part of the Icelandic culture.

Traditionally, singers sang about love, tough sailors, and how hard the Icelandic winters were (and apparently still are, considering the last few weeks). There were also songs about meeting elves, avoiding trolls, missing home, and how beautiful the Icelandic nature is.

Some of these songs are still sung today while others have been lost forever. Over the centuries, new songs have emerged and so have new styles, creating a whole range of folk music which the Reykjavík Folk Festival combines and celebrates.

Over the course of three days, starting on the 1st of March, twelve performers will take the stage at Kex hostel, delivering a wide variety of musical styles that will hopefully make you forget about the wind outside and let you rejoice with friends in the true folk-spirit.

These are the performers at this years Reykjavík Folk Festival:

From the Viking town of Hafnarfjörður comes the musician Svavar Níelsson. Svavar with his musical project, Stuntbird, is relatively new to the Icelandic music scene but if his newly released demo album, (aptly named ‘The Demo Tapes’) is any indication of what to come, we can expect some great things in the future.

Mads Mouritz often performs in his native tongue, Danish, but you don't have to understand the language to appreciate his soft, sweet vocals and beautiful melodies.

Although hailing from Denmark, Mads now lives in here Iceland and is currently working on some new songs which were inspired by his new Icelandic friends. Mads will be performing on Thursday evening at the Reykjavík Folk Festival, and perhaps some of his musician friends will join him on stage.

Reykjavík based singer and songwriter Myrra Rós has been very busy the last few years. Since 2012, she has released three albums, travelled all over Europe, bringing her lo-fi folk-pop music to the world.

Myrra Rós’ unique blend of pop and folk music as well as her stunning and haunting vocals, has made a great impact on the Icelandic music scene and she will surely be a crowd favourite at the Reykjavík Folk Festival.

Reykjavík born and raised, Lára Rúnars grew up listening to artist such as Leonard Cohen, Tom Waits, Nick Cave, and her father’s iconic band, Grafík. Inspired by these, as well as strong female artists such as PJ Harvey, Stina Nordenstam, and, of course, Björk, Lára produces beautiful, melancholic and dreamlike indie-pop music. 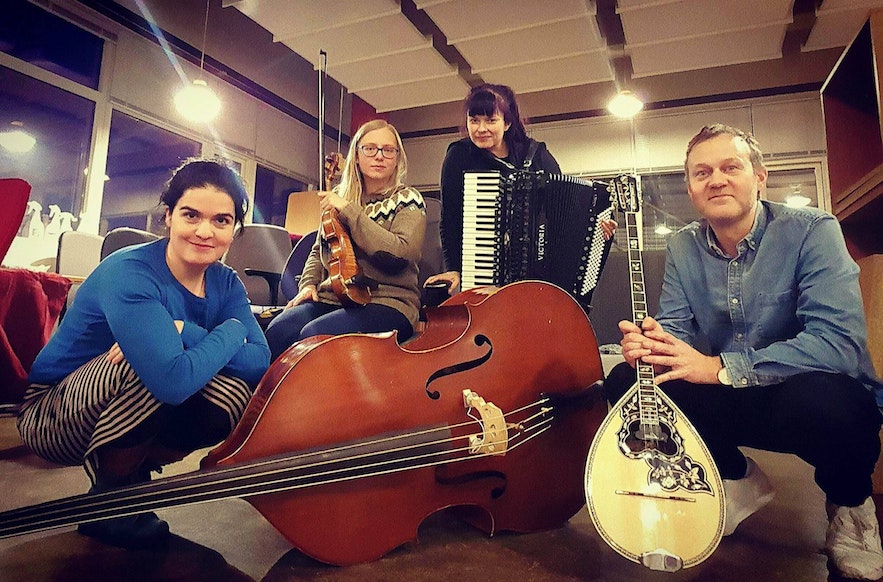 Reykjavík Folk Festival aims to mix folk music of different styles, and bringing the non-Nordic element to the festival this year is the quartet Syntagma Rembetiko.

The members might be Icelandic, but their musical style will take you to the streets of Greece as it is inspired by the rembetiko style which was formed when Turkish refugees arrived in Athens around 1920.

The Icelandic band Kólga started out as a bluegrass band but didn’t seem to find their footing in this American roots music genre. Although they do perform a bluegrass song or two from time to time, their main focus is on Celtic, Scandinavian and Ukrainian roots and folk music classics, as well as original compositions. All songs are performed in Icelandic, meaning that you might hear some songs from your homeland sung in Icelandic tongue.

Country boy Halli Reynis grew up in Dalabyggð on Iceland’s West Coast. He first picked up a guitar at a young age and has hardly put it down since.

The singer/songwriter performs regularly around the country with his acoustic guitar, in a true troubadour-manner, getting inspired by the small-town atmosphere and the beautiful Icelandic nature.

For years, Pétur Ben was very active in the Icelandic underground scene but it was his collaboration with the famed musician Mugison that got the public’s attention.

The folk-rock guitarist stepped out of Mugison’s shadow with his debut album ‘Wine For My Weakness’, which was awarded ‘Album of the Year’ at the 2006 Icelandic Music Awards.

His hard-hitting music and cool air have earned him a successful solo career as well as many collaborative works with musicians such as Mugison, Emilía Torrini and Nick Cave.

Musician Árni Vil will release his debut solo album later this year, but he is no stranger to the Icelandic music scene. A former member of the electro-pop group FM Belfast, Árni has released two new songs from his upcoming album which has the working title ‘Slightly Hungry’.

The former, ‘Stay the Same’ has a more sombre and folksy feel, a far cry from the old FM Belfast music. His second song, ‘The Hitchhiker's Ride to the Pharmacy’ is a little more upbeat, containing the signature youthful sound and joy of his former band.

His performance at the Reykjavík Folk Festival is highly anticipated as the audience is eager to see what this talented musician will bring to light.

Nestled between rocky mountain ranges in the east and the wild Atlantic Ocean in the west are the green valleys of the Borgarfjörður region, the home of the Icelandic singer Soffía Björg.

Her music is inspired by Americana, folk and her surroundings; the rolling hills and rough landscapes of the Borgarfjörður region. Her music reflects those nature-traits; sometimes smooth and beautiful but often rugged and unruly. Combined it produces a haunting melody and a fascinating sound.

The happy-go-lucky Icelandic reggae band Ojba Rasta made a few waves in the Icelandic music scene when they first emerged in 2009. Although the band is officially still together, they have been inactive for a while now, leaving the lead singer, Teitur Magnússon, free to pursue his solo career.

Teitur will perform on Saturday at the Reykjavík Folk Festival. The audience can expect hippy, freak-folk music with original Icelandic lyrics, acoustic sounds, and, of course, good vibes.

Bjartmar Guðlaugsson is one of Iceland’s most beloved musicians. He’s been writing music for over forty years, even creating lyrics to some of Björk’s music in the 80s. His songs have been just as much a part of the Icelandic daily lives as skyr, and his song ‘Þannig týnist Tíminn’ was voted the nation’s all-time favourite in 2014.

His usually humorous lyrics often show the darker side of life, portraying human flaws to which we all can relate. Unfortunately, for English-speakers, his lyrics are in Icelandic, but his melodies are both fun and quirky, and perhaps you’ll be able to find a native at the Reykjavík Folk Festival who will be happy to translate his lyrics for you.