I have been to the Snæfellsnes Peninsula once before, but never quite managed to venture to the small, yet picturesque town of Stykkishólmur, located on the region's northern edge. Two hours and fifteen minutes from Iceland’s capital city, Reykjavík, this was rectified last Saturday as I paid a visit to Kontiki Kayaking, a one man enterprise recently established by the town’s harbour.

On this pleasant Saturday in August, I found the drive from Reykjavík to Stykkishólmur one of genial distractedness. The late summer, it seemed, had withheld its retreat long enough to make the Snæfellsnes Peninsula positively glow for me; rolling farmlands intermittently gave way to long expanses of lava rock, with hillsides gently extending into mist-clad, snowy peaks.

The coastline, ever carving itself into new and gnarled contortions, was a near constant companion, and sighting Icelandic horses, waterfalls and mountain-side ravines was a common occurrence. 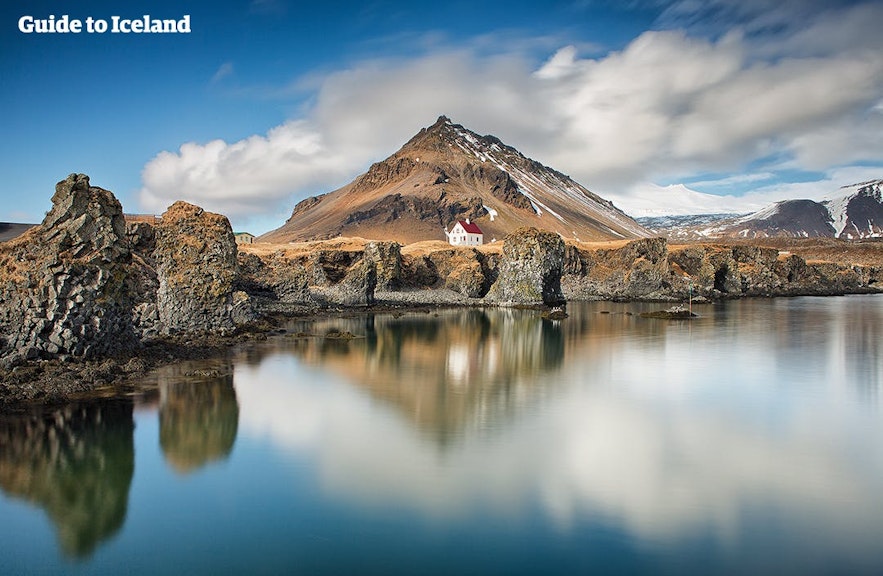 It wasn’t all magic, however. At one point I’m pretty sure a speed camera flashed me. Either way, it’s always good for prospective travellers to know the road’s recorded. It might save you a hefty fine.

Reckless or not, the journey to this sleepy hamlet was a resounding success. Stykkishólmur is the largest town on the Snæfellsnes Peninsula, though one wouldn’t think so on initial arrival. A quaint fishing settlement, I was taken immediately with the historic wooden buildings, the competing influences of European architecture.

The harbour, too, is particularly scenic with the lusciousness of Súgandisey Island serving as the town’s backdrop. Stykkishólmur harbour also happens to be where one might catch the ferry to the neighbouring island of Flatey, known for its seasonal visitations and traditional aesthetic. This day, however, it sat adorned with smaller fishing vessels, all of which were bobbing perpetually with the strengthening gale.

I pulled up beside a panel sign pointing in the direction of Kontiki Kayaking. The operator is named after the famed 1947 Kon-tiki Expedition that saw Norwegian explorer, Thor Heyerdahl, attempt to demonstrate that early South Americans could have colonised Polynesia using primal tools and materials for raft building.

Outside of the office, we were met by Kristján, our guide for the day, who solemnly informed us the tour would have to be a put back a couple of hours; the winds were simply too high. This was no problem—the experience should be as optimum as possible, not just for safety reasons, but as a matter of quality. Without hesitation, I asked Kristján "Does anyone fall out of the kayak?"

"Oh yes," he said, with a wry smile, "we've had four fall out this summer. But don't worry, that won't happen today". He threw me a cheeky, semi-comforting wink.

In the meantime, both the town of Stykkishólmur and Snæfellsnes were open to explore, which left me feeling thankful and fortuitous; there was one attraction I had, for the longest time, felt compelled to see for myself. I talk, of course, of Kirkjufell mountain, only twenty minutes to the west, looking over the neighbouring town of Grundarfjörður. 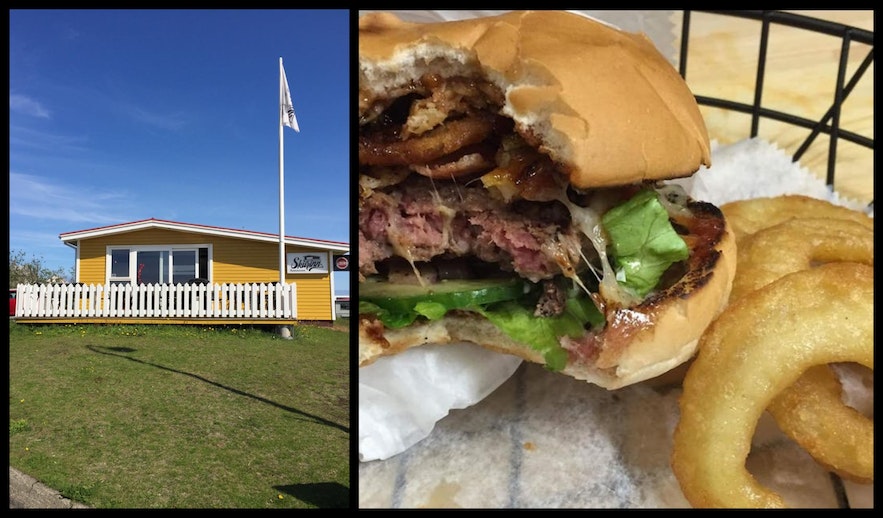 First, I stopped for a reasonably priced burger at Skúrinn. I thought for a moment about the burger choice ‘Mrs. Clinton’ but decided, after much debate, that it seemed unappetising somehow. Instead, I opted for the far more delicious-sounding ‘Senior Citizen’, which, like most senior citizens are not, was covered in pulled pork, bacon and BBQ sauce, served with a tidy basket of homemade fries and sweet potato.

I was tempted to sample the FatBoy/FatGirl nachos, but thought my hips womanly enough already, and so settled for a sparkling water as I mused on the line “this is a bad place for a diet”, plastered across the window. Indeed, I was too full to move, and ruefully enquired with staff as to whether they might have a wheelchair in which to transport me back to my car.

Mid-digestion, it was time to sightsee, or more precisely, to see the site, Kirkjufell. Unless this fact has somehow managed to escape you, Kirkjufell is Iceland’s most photographed mountain. It also happens to be the “mountain like an arrowhead” showcased in HBO’s epic fantasy series, Game of Thrones. Against my better judgement, I am a fan of the show, and felt an urge to growl aggressively in Valyrian upon arriving at the foot of the mountain. 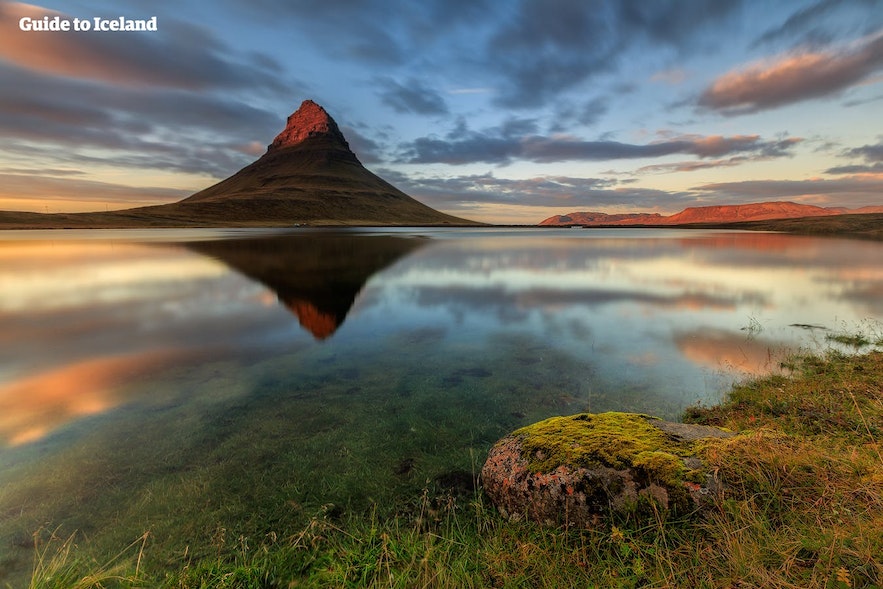 Controlling myself, I instead spent a happy ten minutes gazing up at the feature, strolling around its pet waterfall, Kirkjufellsfoss, and snaring passersby into taking grimacing snapshots of me. It was, in other words, a worthy detour.

And so, with limited time, I drove back to Stykkishólmur, pulling into Kontiki and reacquainting myself with our guide, Kristján. This time, he was joined by three young Americans—I believe they were called Cody, Logan and Raven, or something like that—and thus, out afternoon kayaking was a-go at last.

After friendly introductions, we followed Kristján into the building to prep.

Kontiki Kayaking is situated in a renovated fish processing factory, though one would never know it; the walls, painted a bright, welcoming yellow, are adorned with maps, photographs and eclectic decor strengthening the operator’s ties to the region. 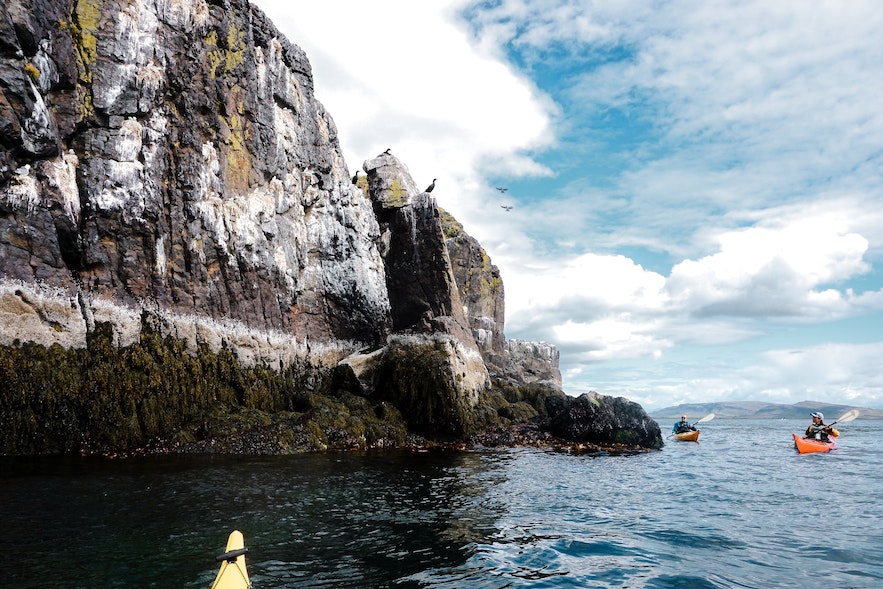 Before kitting up, Kristján pointed out our location on the map, drawing out the proposed route around the island of Landey with his finger. Though only a year into running, Kristján openly speculated about the possibilities of running future tours around more of the Breiðafjörður islands, of which there are thought to be approximately 3000.

Next, we were provided with our specialist attire; a spray skirt (designed to seal you and the kayak’s interior from intruding water), a waterproof shirt and a rather adorable floatation vest. Regardless of the precautions, Kristján told us that the water we'd be kayaking over only reached a mass height of 3 metres, making one's chances of drowning pretty unlikely.

We took a pleasant, five-minute drive down to the boat ramp, itself located behind the only dry dock on the Snaefellsnes Peninsula, during which time Kristján provided some interesting facts about the near 500-year-old settlement of Stykkishólmur. 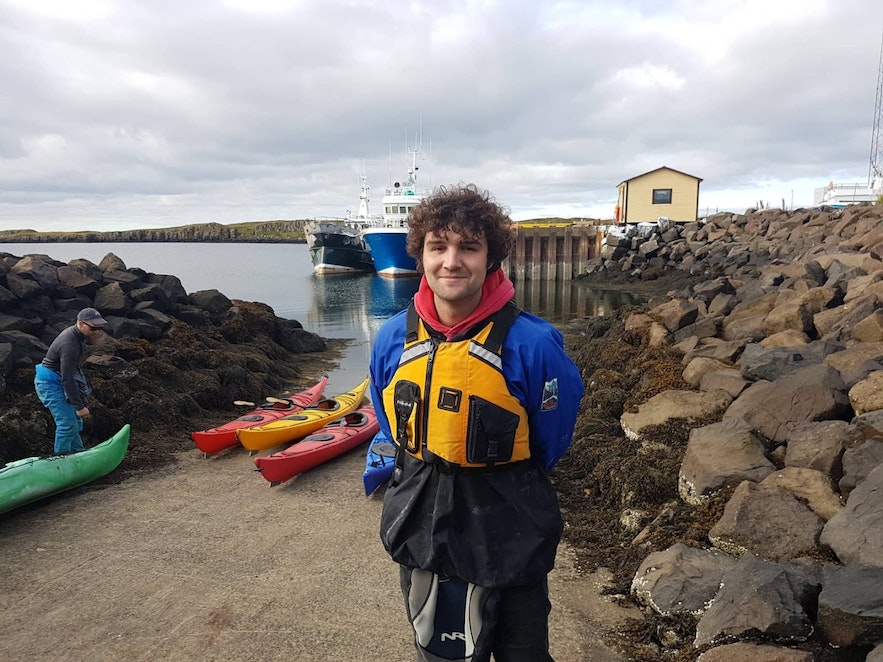 For one, the town was once a centrepoint for Danish, Dutch and German merchants utilising the town’s naturally protected harbour. It also contains the very first two-story building constructed in Iceland, the jet-black Norwegian House, originally erected as a family home in 1828.

Once at the boat ramp, Kristján unpacked the kayaks, laying them half in the water, and demonstrated how to correctly seat oneself, utilising the thighs and footrests for balance. At the same time, he assured us as to the kayaks' safety, informing us that these were designed for long-distance travel—under different circumstances, we could have loaded the kayaks with supplies and traversed the fjord!

Sliding in, I couldn’t help but a feel a little restrained, despite knowing I had already been provided with a larger kayak due to my large and, frankly, admirable physique. With a little maneuvering, I settled into comfort and allowed Kristján to push me out onto the water. 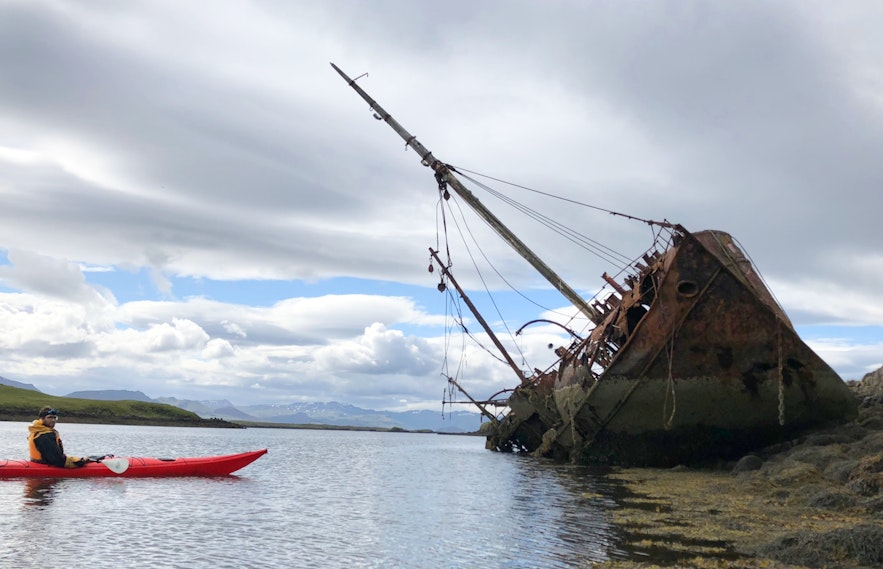 Now, at this point, I’m liable to tell you kayaking is not the easiest activity in the world. Alright, sitting in a stationary position is not particularly taxing, but the constant rotation of the shoulders might come as a physical shock for those unaccustomed to raising their arms above shoulder height. The positioning of the feet also needs to be maintained for long stretches in order to keep balance, which can be a little uncomfortable when you're trying not to destabilise the craft.

I was not a duck to water, to the say the least—more a hairless, helpless ape, kept afloat by little more than 3 centimetres of plastic.

In truth, most of the exertion occurred in the tour’s first half as we pressed into the wind; fatigue arose as we were attempting to better our newfound skills, portray an air of grace on the water and prevent the gusts from causing the kayak to drift. 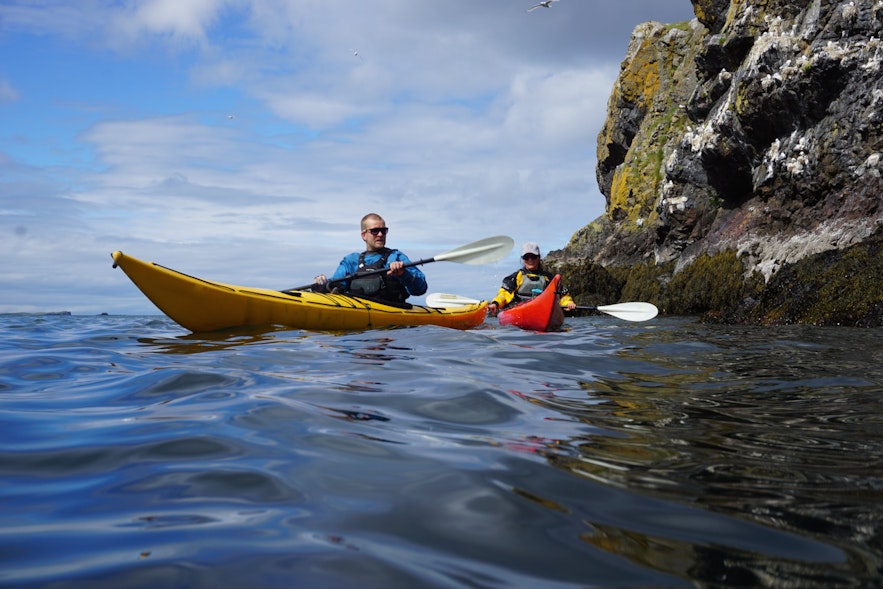 After what was roughly a 1000 metre run, Kristján led the group behind a sheltered cliff face and, at last, the kayaking experience became serene, the craft proving to be symbiotic with the now calm ocean waves. Now, it took the merest effort to increase my speed and before long, I was happily whizzing across the water's flat surface. I could even rest the paddle on my kayak, allowing me to sit back and appreciate the wealth of gorgeous scenery around me.

Fulmars and Eider Ducks joined us throughout the tour, either nesting amidst the rocks of the coast, bobbing gently on the lapping walls or soaring overhead. Kristján told us that, usually, Atlantic Puffins would be a common sight in August but, given Iceland’s just experienced “the summer that never came”, the birds departed early for open water. 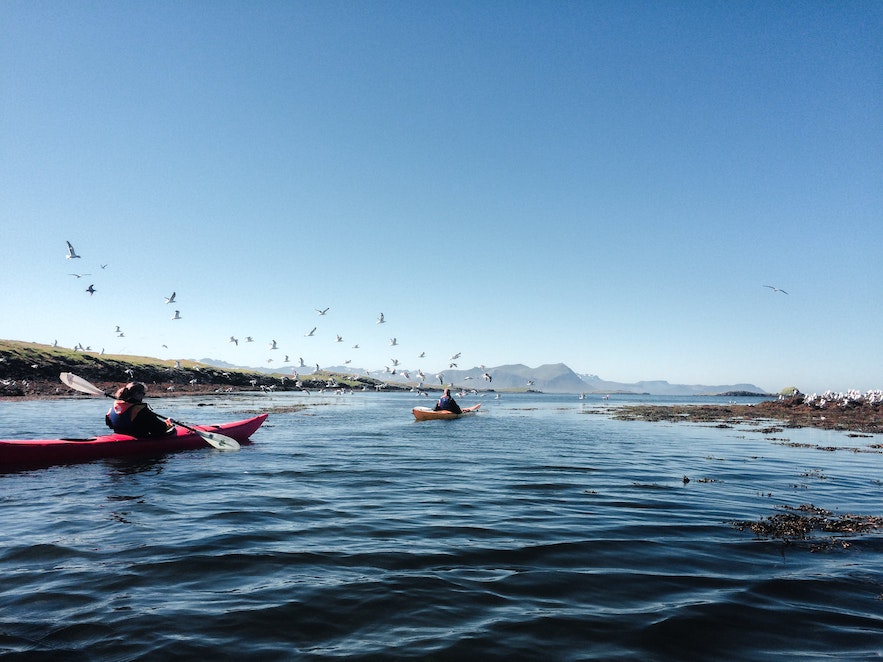 To end the day, it was decided to drive around the peninsula entirely, making the odd stop at panoramic viewpoints, as well as other sites of interest. Behind the wheel, its expected that you’ll be overcome with choice, will volcanic craters, golden beaches and quintessential fishing towns all vying for your attention.

If you would like to book a tour with Kontiki Kayaking during your time on the Snæfellsnes Peninsula, make sure to follow this link and you too can have the open-sea kayaking adventure of a lifetime.