Which mountains are the most beautiful mountains in Iceland, where are they located and what kind of mountains can you find in Iceland?

Iceland is filled with interesting rock sculptures, lava formations, volcanoes and mountains of all shapes and sizes. In the Westfjords you can find high table-top mountains with narrow fjords in between but the mountains by the fjords in the east of the country are more rugged and harsh.

The mountains in the Westfjords are older (about 10-16 million years old) and have been shaped through thousands of years of carrying heavy glaciers and battling with the natural elements, polishing off the rough edges. Younger mountains that have been formed when two tectonic plates crash into each other are rougher on the edges.

Iceland is situated right on top of two tectonic plates and is also on one of the so-called hot spots on earth, with intense volcanic activity and frequent earthquakes happening.

Above and below are pictures of Vestrahorn mountain, in the east of Iceland. 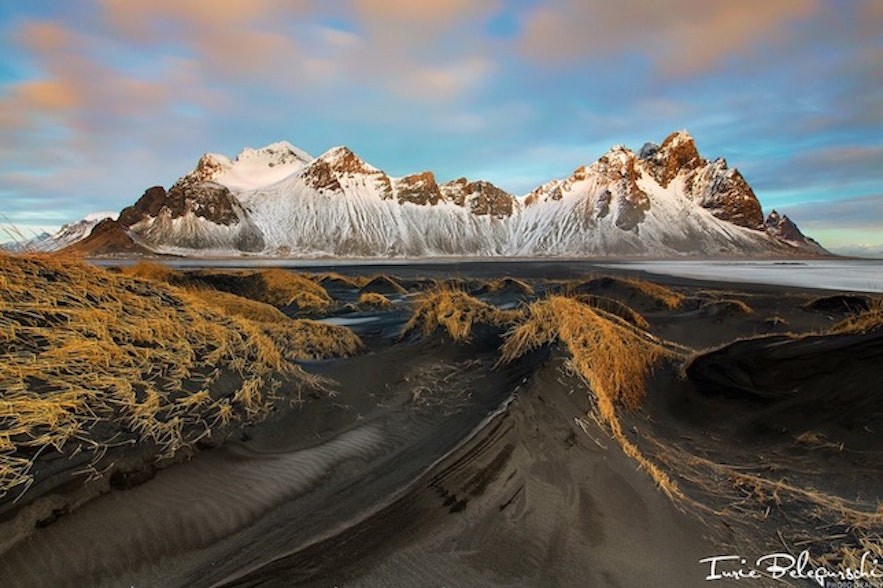 Most Icelanders have their favourite mountain and some mountains are more known then others. The highest mountain in Iceland is Hvannadalshnjúkur on top of Vatnajökull glacier, in the southeast corner of the country.

Eyjafjallajökull, in the south of Iceland, is arguably the most internationally famous mountain in Iceland after its volcanic eruption in 2010 – but every Icelander knows names such as Herðubreið (a mountain in the north-east of Iceland).

Many feature in folk tales or poetry and often there’s a special bond between a person and their local mountain and everyone will disagree on what is the most beautiful mountain in the country.

Reykjavík’s signature mountain is Esjan, that can be reached in 20-25 minutes by car from the city centre. You can also take the bus to Esjan, and if you want to hike to the top, it only takes about 2 hours (one way!)

A few other mountains can be seen from Reykjavík, such as Keilir (shaped like a cone) that's on Reykjanes peninsula (going towards Keflavík), Akrafjall and Snæfellsjökull.

Following are my personal favourite mountains and rocks in Iceland. 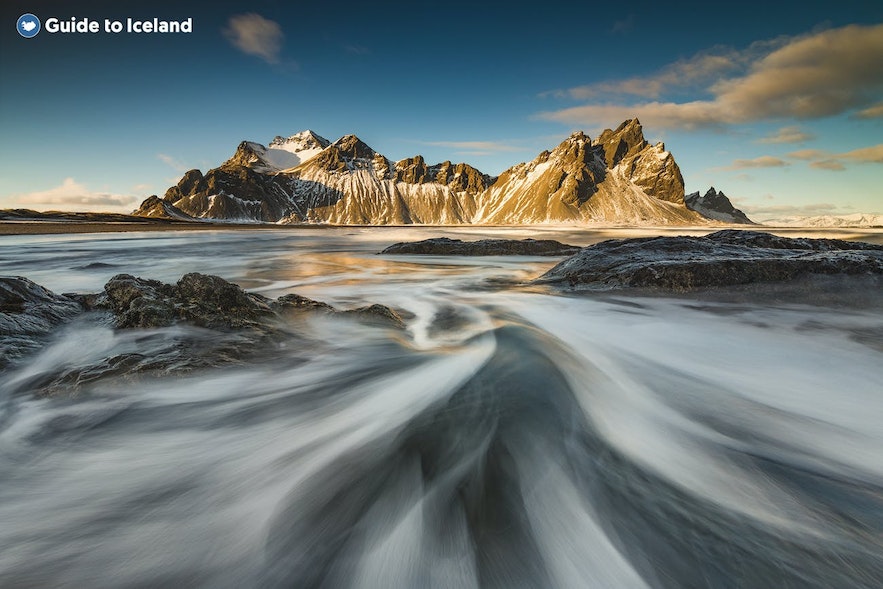 This mountain has become known as the ‘Batman’ mountain among locals because the three towers are shaped like a bat. It is situated in the east of Iceland. If you drive along the ringroad number 1 heading East from the town Höfn, you will see it when you are in Papafjörður fjord, you can also take a right turn towards Papós to admire it. It's accessible to any type of car.

In front of it you see a little bit of Vestrahorn mountain, that is right next to it and is also a gorgeous mountain (as can be seen above). 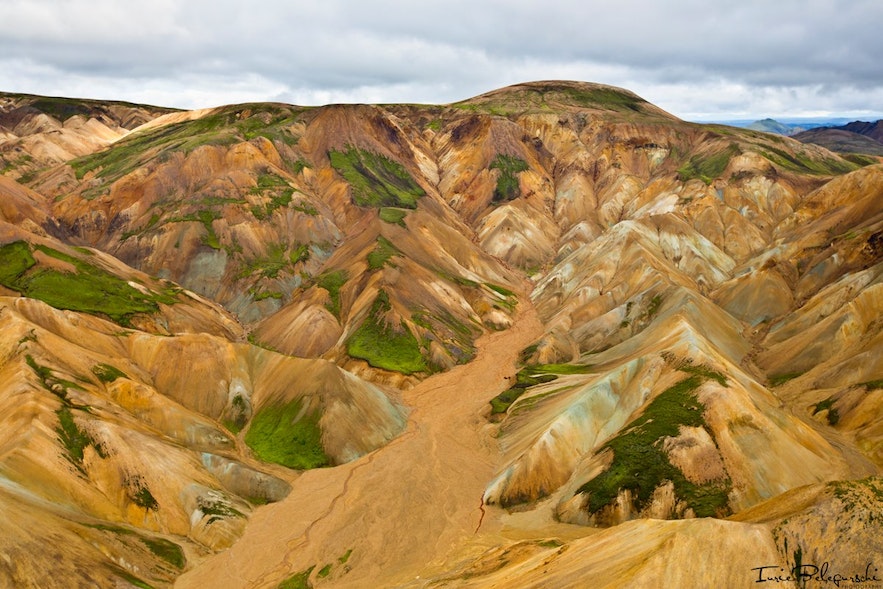 Landmannalaugar is an area in south of Iceland that actually has many different mountains and is not one specific mountain. This mountainous area is known for it’s different colours, you can find mountains in red, yellow, orange, white, black, blue, green and purple.

To get there you will need to take a bus or drive a 4x4 car as these mountains are situated in the Icelandic highlands. A number of Landmannalaugar tours are available and this is also where Iceland's most popular hiking route, Laugavegurinn, starts.

Photo by Hlynur A.

This mountain is situated within the Westman Islands and has a grassy bank all the way to the top but a steep birdcliff on the other side. It also overlooks the Herjólfsdalur valley, where the biggest festival in Iceland takes place every summer, and you can see all over the Westman Islands from the top. From the ground it looks very impressive and towers over the low-lying valley.

The trip with the ferry is only 35 minutes - but the drive to Landeyjahöfn harbour from Reykjavík is about 2 hours. You drive the ringroad heading east, past Hvolsvöllur and take a turn right towards Landeyjahöfn or Bakki airport, before you reach Seljalandsfoss waterfall. Here you can find our Westman Island tours. 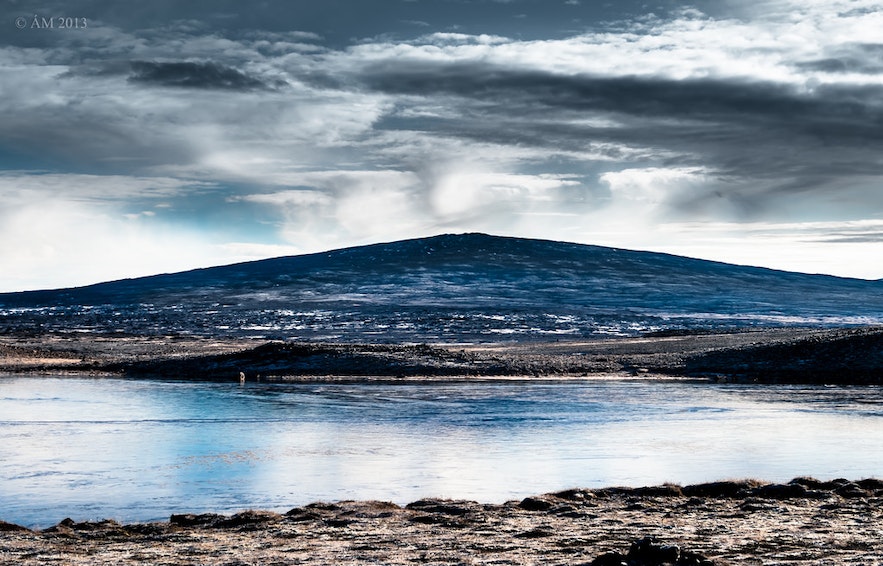 Skjaldbreiður mountain has a perfectly round shape and the name means ‘broad shield’ because it resembles a shield - or a female’s breast. Many hills or mountains in Iceland have this natural, round shape – the mountain Baula is another example. 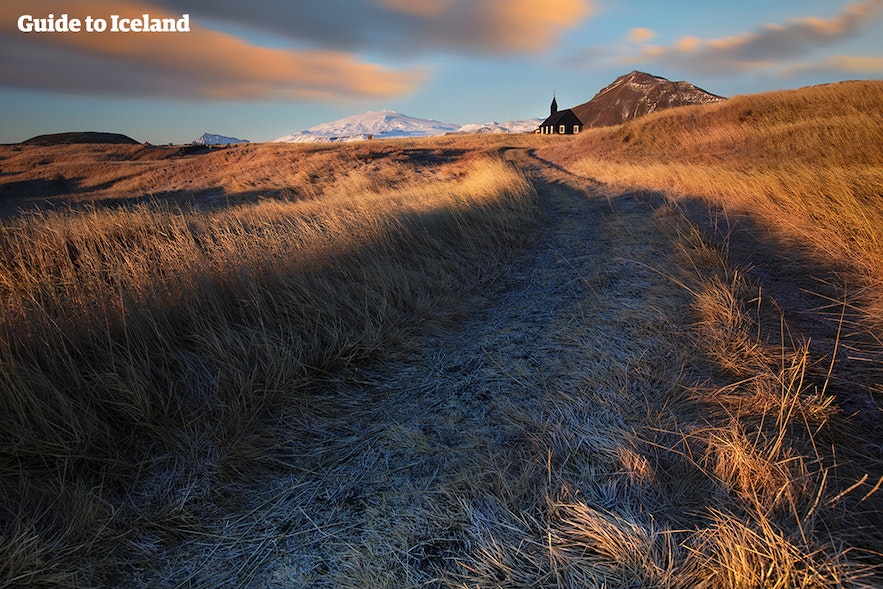 Snæfellsjökull is a volcanic glacier that has an iconic top that sort of looks like two devil horns, no wonder it was thought to be the entryway to hell. Jules Verne also used it as the entryway to the centre of the earth in his book Journey to the Centre of the Earth.

Snæfellsjökull is at the tip of Snæfellsnes peninsula in the west part of Iceland. On a clear day, you can see the mountain from Reykjavík. Or if you'd like to see it from the top, you can join this Snæfellsjökull glacier hiking tour. If hiking is not your thing, then there are a number of other Snæfellsjökull tours to choose from. 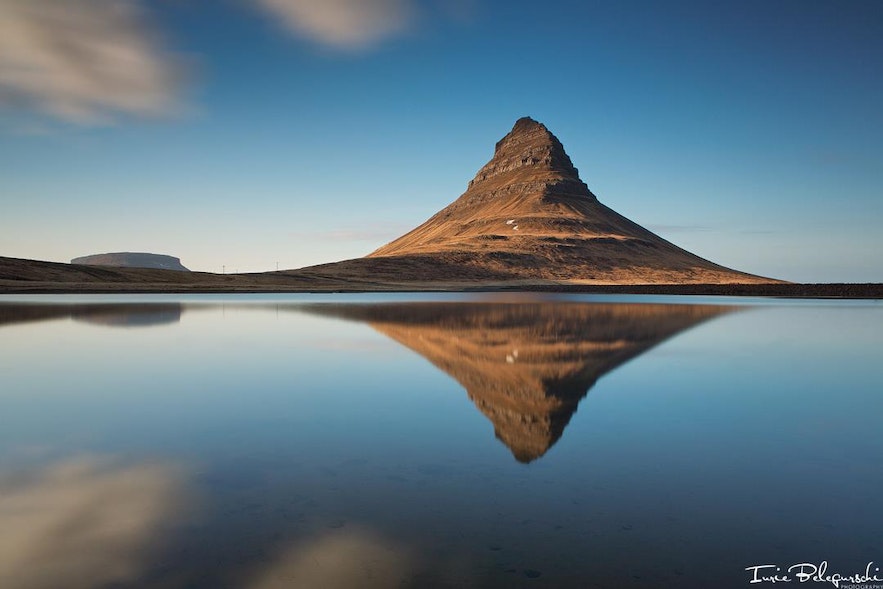 This perfectly cone-shaped mountain can be found on the Snæfellsnes peninsula, very close to Snæfellsjökull and is the picture perfect backdrop for your ideal photo. It's on the northern side of the peninsula, by road number 54 and is found just outside the small town of Grundarfjörður, about a 2,5 hour drive from Reykjavík. 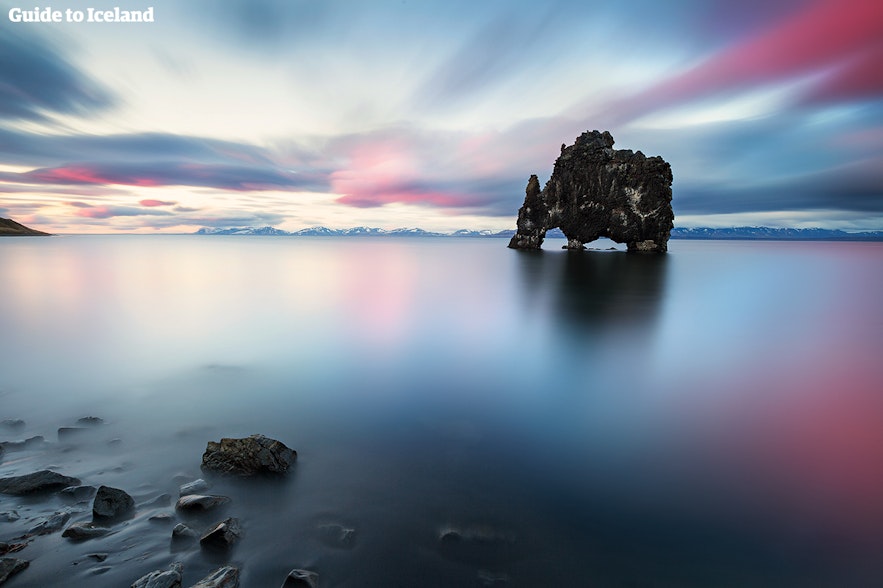 The coolest looking rock in Iceland. A 15 meter tall rock out in the sea in the northwest of Iceland. A hidden gem in Iceland's nature, not to be missed. To get there you drive for 3 hours and 40 minutes from Reykjavík, heading north on ringroad number 1.

After you've driven past the road leading to Hvammstangi and a little while before you reach Blönduós, you'll have to take a left turn onto road number 716 and then onto road 711 that brings you all the way to sea level where this rock awaits you. To go exploring, check out our car rentals or our summer self drive tours! 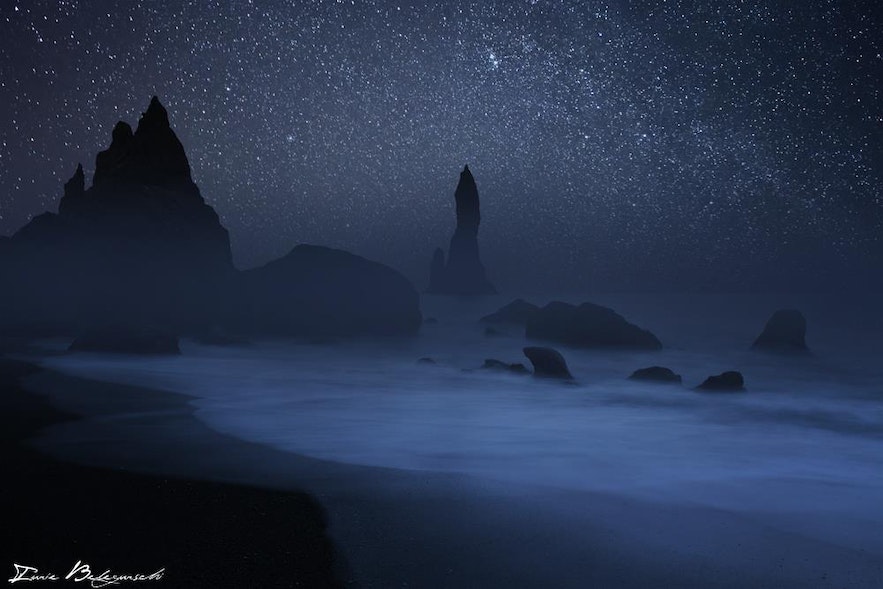 Beautiful rocks rising from the sea in the south of Iceland, by Dyrhólaey. You get a great view of them from the town Vík, which is by ringroad number 1 in the south of Iceland, about a 2,5 hour drive from Reykjavík. The road is accessible by any type of car. Make sure you also go to the top of Dyrhólaey and get the view towards a black beach on one hand and towards Mýrdalsjökull glacier whilst experiencing the rich birdlife. 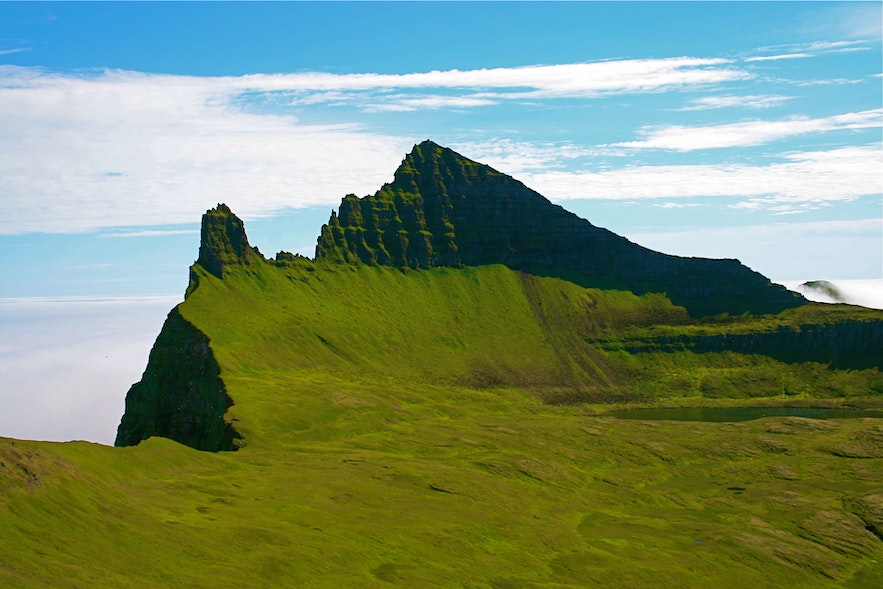 Photo by Mickaël Delcey, from Wiki Creative Commons. No edits made.

Last, but definitely not least, I want to mention Hornbjarg mountain. It is one of the most difficult mountains to get to in Iceland. It's a part of Hornstrandir (can be translated as Corner Shores) in the northernmost tip of the Westfjords in Iceland, the most remote area of the country.

Some people used to live in this area but they all left in the 1950's. Besides gorgeous scenery, remoteness and total tranquility, this is also a great place for birdwatchers and those who'd like to catch a glimpse of an arctic fox. No roads lead to Hornstrandir, you'll have to take a boat from Ísafjörður or Bolungarvík or you can join this 6 day tour of Hornstrandir. Daytours are available from Ísafjörður.

Check out these main attractions by Route 1.

Find out the best things to do in Iceland. Explore all the fun activities, natural wonders, best places to visit, and the most exciting day tours in Iceland in this list of the 12 top things to see...