Did you see the fireball meteor that shot across the sky last night in Iceland? Right at the same time as the Northern Lights were dancing across the sky?

I was relaxing at home last night in the centre of Reykjavík and at around 23:30 I glanced at my phone and saw that a friend had posted some images of gorgeous Northern Lights in the sky, and comments of various people saying they spotted a meteor in the sky.

Now, I love the sky and stars and space and anything to do with nature, I once even entered a competition to be sent to space (I didn't win), so of course I was bummed to have missed this meteor display.

Missing the Northern Lights is ok, I see them very regularly and have seen Northern Lights hundreds of times in Iceland - last time just a couple of weeks ago, but I was bummed about missing out on the meteor.

And what a meteor it was! It could be seen for up to 10 seconds crossing the sky! 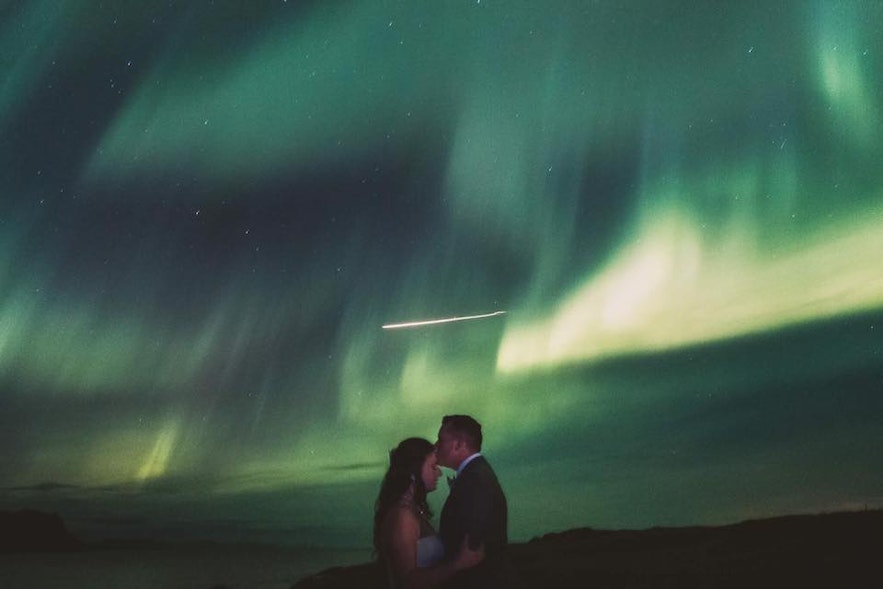 One couple was lucky enough to have their wedding photo taken right underneath it! The above shot was taken by photographer Kristín María, that works for the travel agency Pink Iceland that specialises in wedding planning. This shot is from Búðir, on Snæfellsnes peninsula.

Talk about being at the right place at the right time! This has got to be the most amazing wedding photo ever taken! 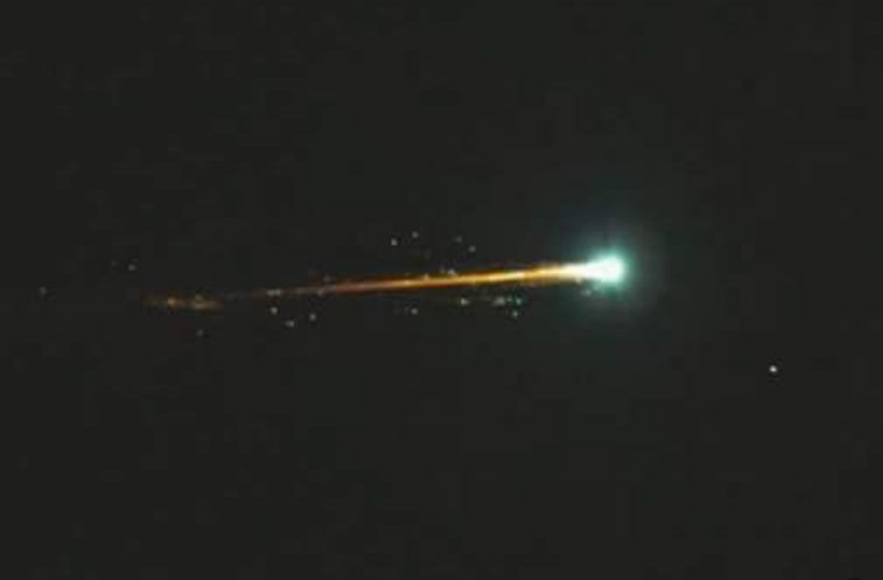 It was seen at around 22:50 last night (12th of September 2017), and spotted by hundreds of people as it just so happened that there was a lovely Northern Lights display around the same time that a lot of people were admiring.

The Icelandic Astronomy Association posted a video of it and dozens of people have commented on it, describing where they saw it and what it looked like. Just have a look at this (low quality, but amazing) video of it:

It was a yellow and red fire-like flare with a long tail that eventually broke apart with a blue colour resembling a firework display. A so-called Fireball Meteor. According to the Astronomy Association the colour of it means it was most likely made out of rock and not iron. The glow of it was really bright, with some people even mistaking it for a street lamp (until they saw it moving) or a burning and crashing airplane!

A friend of mine thought it was the start of an alien invasion, so it definitely sparks different emotions in various people! 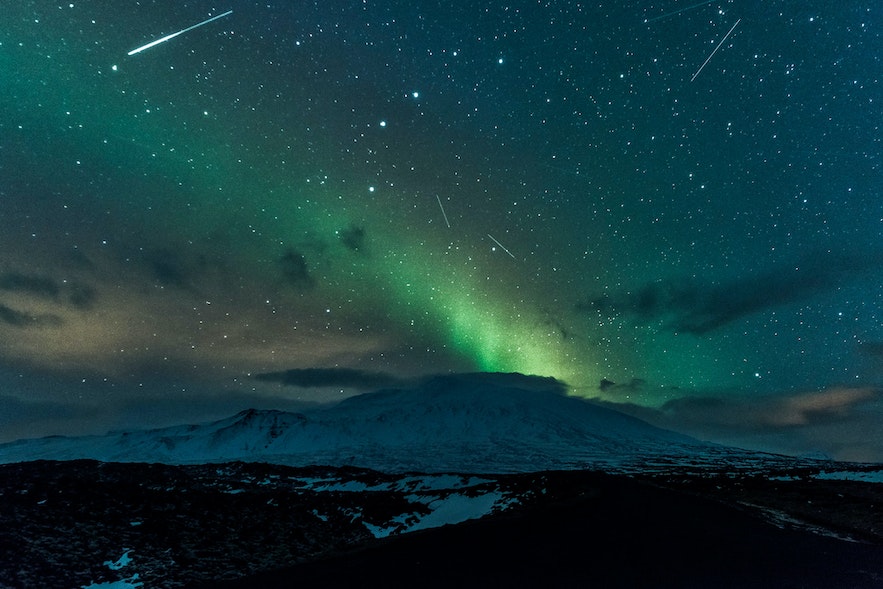 Picture by Diana Robinson, taken by Snæfellsjökull glacier in west Iceland on a different occasion.

It may not be the prettiest, or biggest, meteor to have ever been spotted in Iceland, but it is probably the one with the most witnesses, as it could be seen not only from Reykjavík but also the Westfjords, South and North Iceland. It's estimated that it was around the size of a tennis ball, entering the atmosphere with a speed of 20km (12.4 miles) per second and breaking apart at a height of only 20-30 km (12.4-18.6 miles). 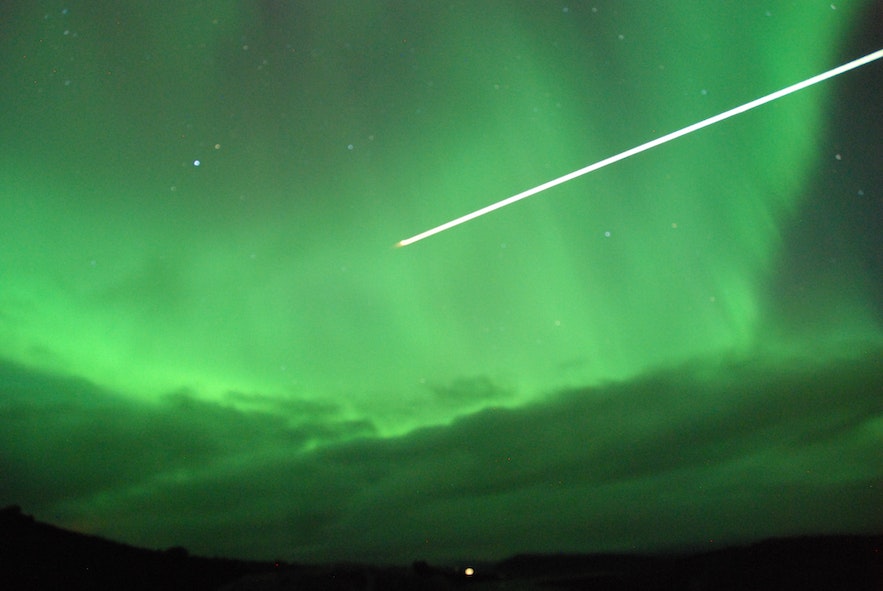 The above picture was shot in North Iceland, by Lake Mývatn by Raymond Luitjens and JimB, from Foss Hotel.

It's not the first time a large meteor is spotted above Iceland at the same time as the Northern Lights, as can be seen for example in the video at the top, taken 2 years ago in November.

I've written about some other natural occurrences taking place in Iceland, such as supermoons, meteor showers, the midnight sun and solar eclipses - but to this day I still haven't seen a solar eclipse or a meteor myself! Hopefully I'll catch it one day.

In no way am I some sort of an expert on astronomy, and I have very limited knowledge about planets, Northern Lights and space (don't we all?), but I love reading up about it and am just mesmerised by its beauty. I always get excited whenever I see the Northern Lights, and they are as common in Iceland as rain is in the UK. I LOVE thunder and lightnings (which we never get in Iceland, I've seen a lightning once in Iceland!) and I'm still waiting patiently to see a solar eclipse.

I also love learning more about this fascinating universe we live in, and can't wait for a planetarium to finally open in Iceland soon. Iceland's first planetarium is scheduled to open in late 2018 in Perlan, or the Pearl, situated on top of Öskjuhlíð hill.

Did you see the fireball meteor last night? Where were you and can you describe it in comments? Post your pictures in comments if you have any!