I recently joined a guided tour of the beautiful Snæfellsnes peninsula with Tröll Expeditions, which is an excellent travel company with many guided tours in small groups. On our bus were only 4 other passengers so we had quite a lovely time and felt like we were friends travelling together.

I have already written a detailed guide of the Snæfellsnes peninsula in 5 parts for those of you who want to explore the peninsula on your own, but I also want to show you what the guided tours to the peninsula are like.

We were picked up in Reykjavík early in the morning and off we went on a 12-hour tour to explore the beautiful Snæfellsnes peninsula. Our first attraction was at Gerðuberg, which is one of the largest basalt column belts in the whole of Iceland. Here the highest columns are 10-14 meters tall.

We walked up to the basalt columns and took photos and picked some berries, which our guide pointed out to us.

There are myriad attractions on the Snæfellsnes peninsula, but one of the main attractions here is the dormant strato-volcano Snæfellsjökull glacier - 1446 m high with a ca 200 m deep crater. 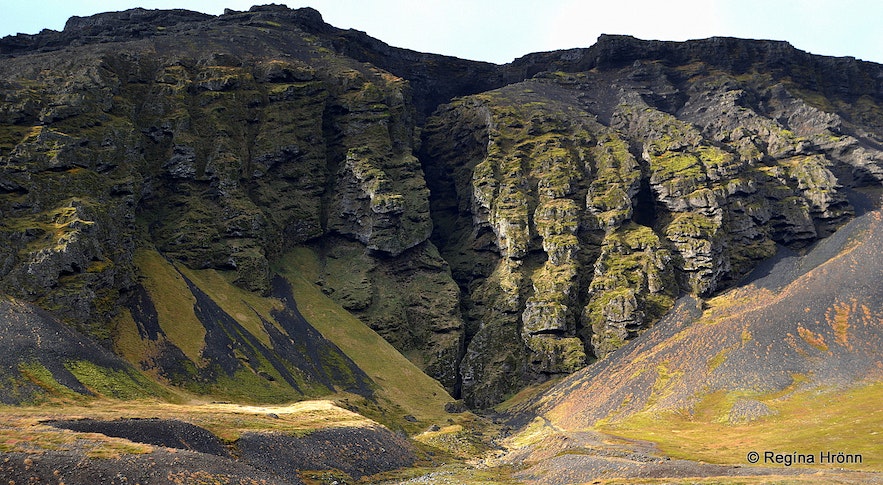 We could see this beautiful ice-capped volcano draw nearer and nearer as we got closer to our next stop - the mystical Rauðfeldsgjá gorge. To me, this is one of the most mystical and ruggedly beautiful places on the peninsula.

According to legend, a tragedy happened here around the settlement of Iceland, which explains the name of this gorge. That story is told in the Saga of Bárður Snæfellsás, the Saga of the first settlers of this area. 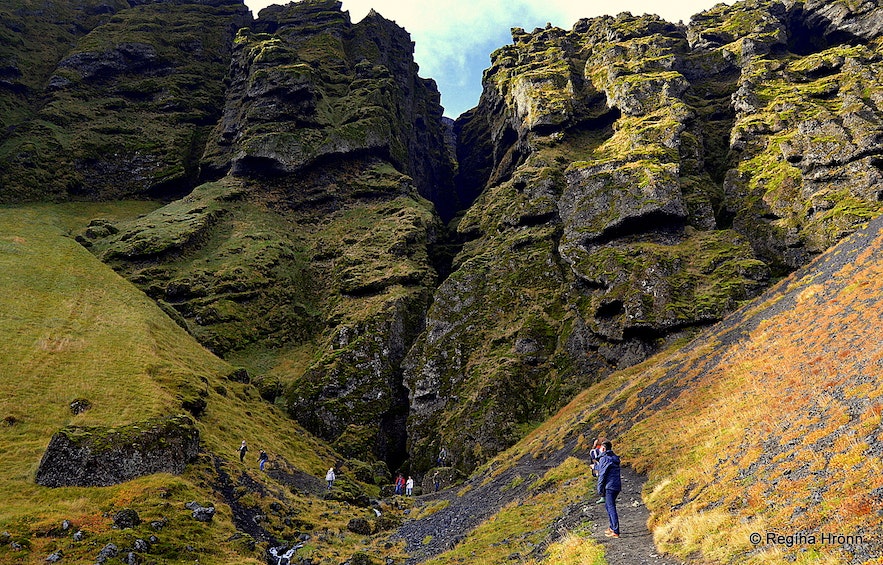 Rauðfeldur, the nephew of Bárður Snæfellsás, while playing on the beach with Bárður's daughter, Helga, pushed her onto an iceberg which drifted away with her to Greenland. Bárður became livid and threw his nephew into the gorge and killed him.

The gorge was named after this tragedy and got the name Rauðfeldsgjá gorge. 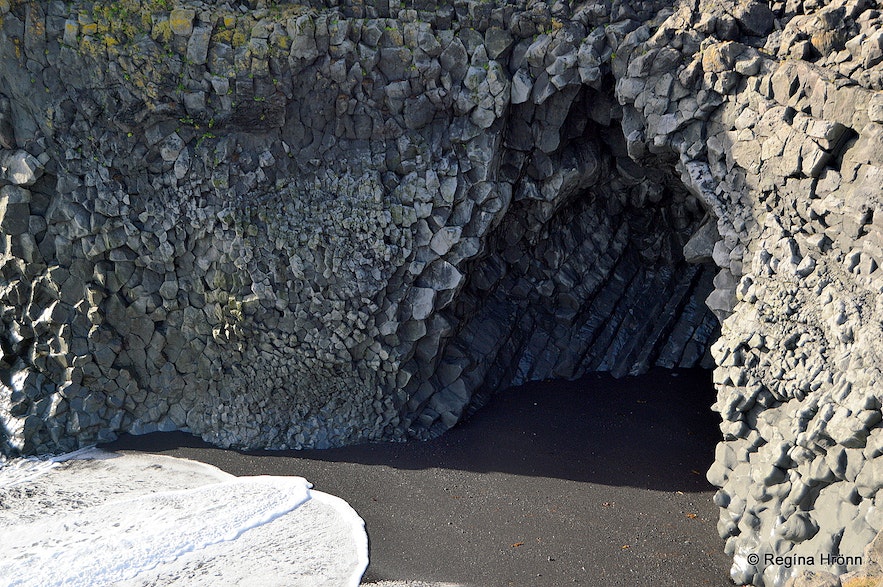 After visiting the mystical gorge we stopped at an extraordinarily beautiful place here on the Snæfellsnes peninsula - the small fishing village Arnarstapi. At Arnarstapi you will see the pure artwork of nature, basalt columns, and cliff formations in abundance.

Here you will also see one of the most beautiful natural harbours in Iceland.

Our guide left us by the big stone statue of Bárður Snæfellsás and we went to explore the shoreline, admiring all these wonderful basalt column caves and stone arches.

After taking some photos at the stone bridge it was time for lunch, which was included in the price of the tour. We had Icelandic pancakes and coffee at a lovely café in the old community meeting house, Diddabúð.

The Icelandic pancakes are traditionally baked here in Iceland when visitors arrive, so you cannot get more local food than this with your coffee. I recommend this place, it is like stepping into somebody's home, cozy and nice, with a small district museum. 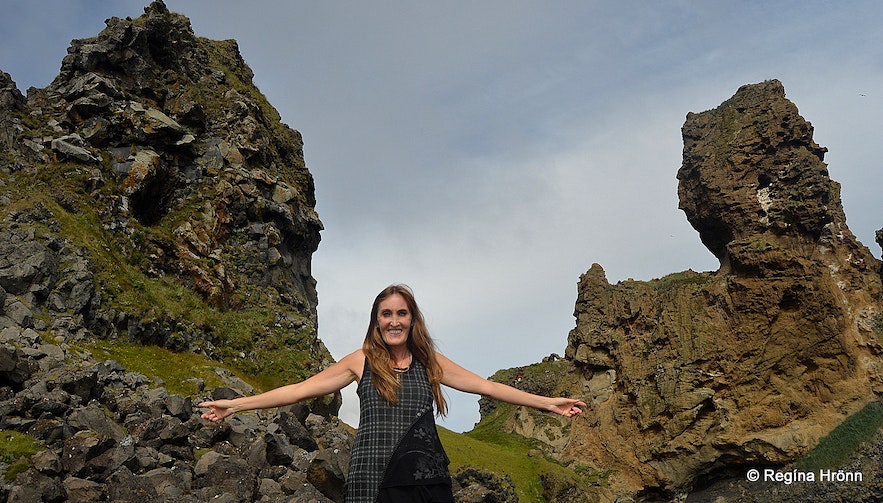 Þúfubjarg cliff is believed to be the eastern part of an old crater that the ocean has eroded away. Lóndrangar, on the other hand, are 2 ancient volcanic plugs with a very distinctive shape, as the bigger one looks like the Sphinx.

These 2 volcanic plugs are also by some believed to be the church and the library of the hidden people of Iceland. You can read much more about this area in my travel-blog the Magical Snæfellsnes Peninsula in West-Iceland - Part II. 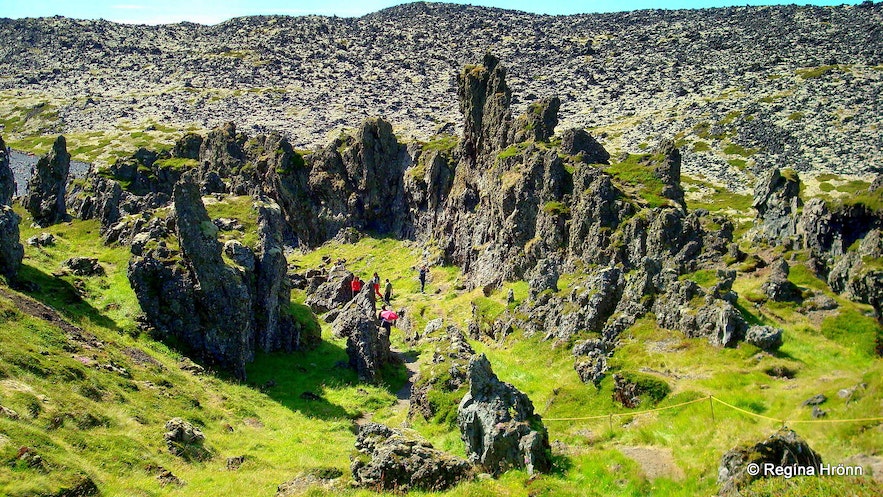 Walking through lava wonderland to Djúpalónssandur

Our next stop was at another magical place on the Snæfellsnes peninsula, Djúpalónssandur - the Black Lava Pearl Beach. There you will step into a lava wonderland with huge lava formations.

I have written a travel-blog about Djúpalónssandur and Dritvík where you will find out about the different lava formations and hear the folklore connected to them.

Here you will find Söngklettur - Singing Rock, which is believed to be the church of the hidden people, and see the troll called Kerling, who is carrying a bundle of fish on her back, just to name a few. 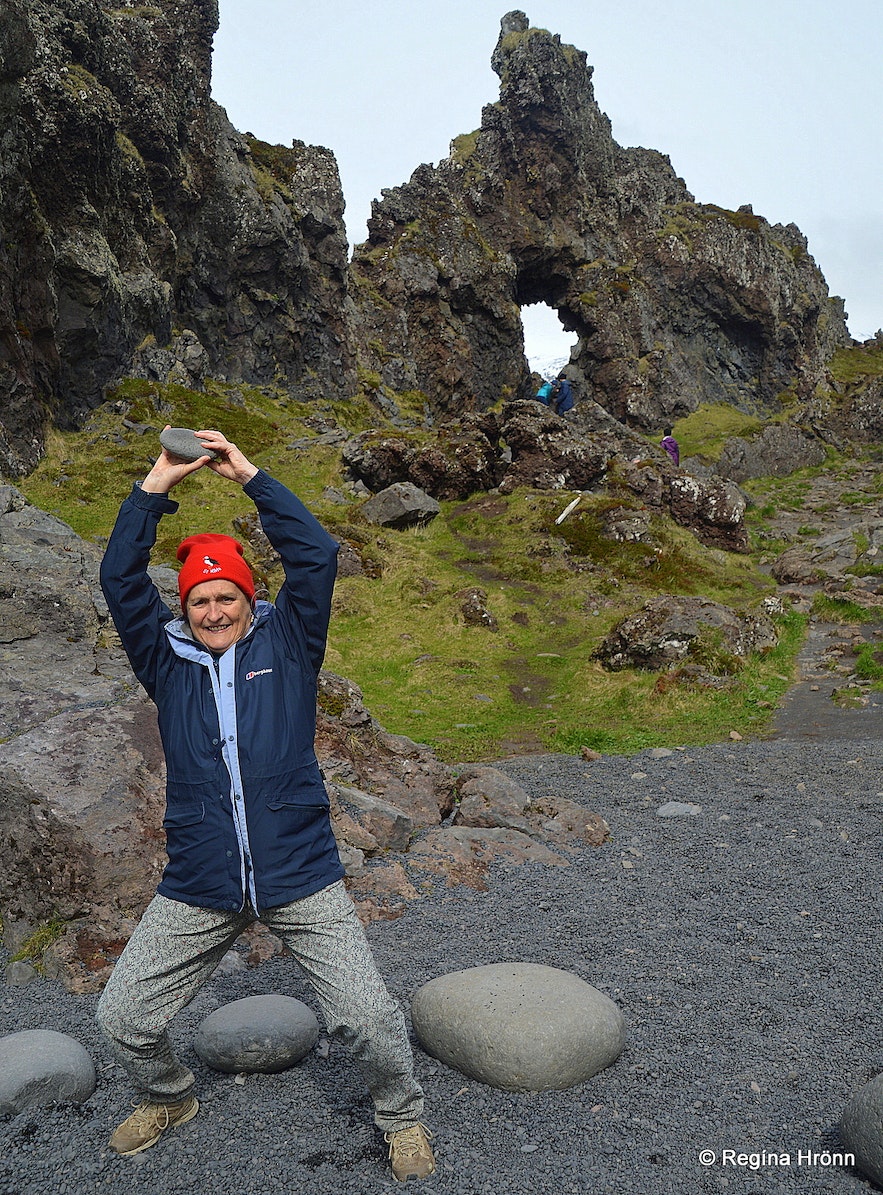 One of my friends trying to lift the lifting stones ;)

When we entered the beach, after walking along the Nautastígur path, surrounded by huge lava walls, we got to try our strength on the 5 lifting-stones - "aflraunasteinar", which were used in olden times to measure the strength of Icelandic fishermen.

Each one of the lifting stones has a name referring to the strength of the person lifting them - they weigh from 23-154 kilos! Those who could not lift Hálfdrættingur, which weighs 54 kilos, were considered to be too weak to work as oarsmen on the rowing boats from Dritvík and were thus not accepted. We got to try our strength on the stones, which was all but easy.

Djúpalónssandur beach gets its name from two freshwater lagoons on the beach, which served as water reserves for the many seasonal fishermen in the olden days on this beach and the nearby Dritvík beach. 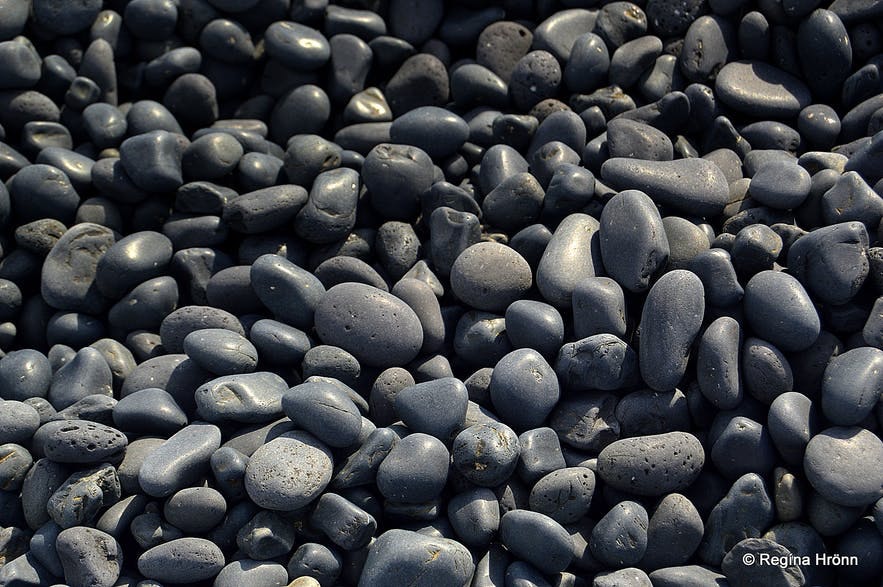 Djúpalónssandur is also famed for the smooth, black lava pebbles, which are called Djúpalónsperlur - the Black Lava Pearls of Djúpalón, which are protected.

Let's be extra careful on this beach as here the sneaker waves can come unexpectedly and carry people with them out to sea. So let's not stand too close to the sea. 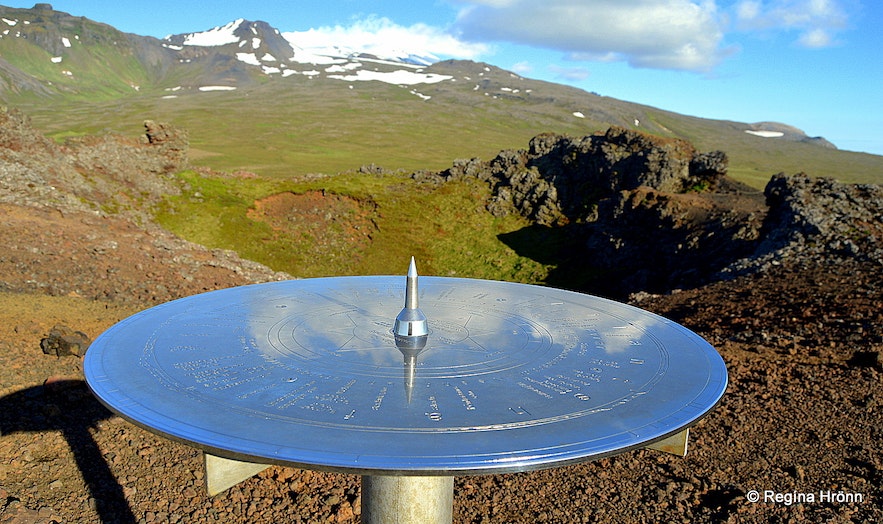 The view dial on top of Saxhóll crater

Our next stop was at one of the many craters on the Snæfellsnes peninsula, Litli-Saxhóll crater which erupted some 3-4,000 years ago. This reddish volcano has been made very accessible as you can drive straight up to it and hike steps up the 45 meters to the top where you can look into the crater.

On top of the volcano, you will find a beautiful, shiny view-dial, made by my father-in-law. It shows the names and height of the mountains which can be seen from the top of the Litli-Saxhóll volcano. 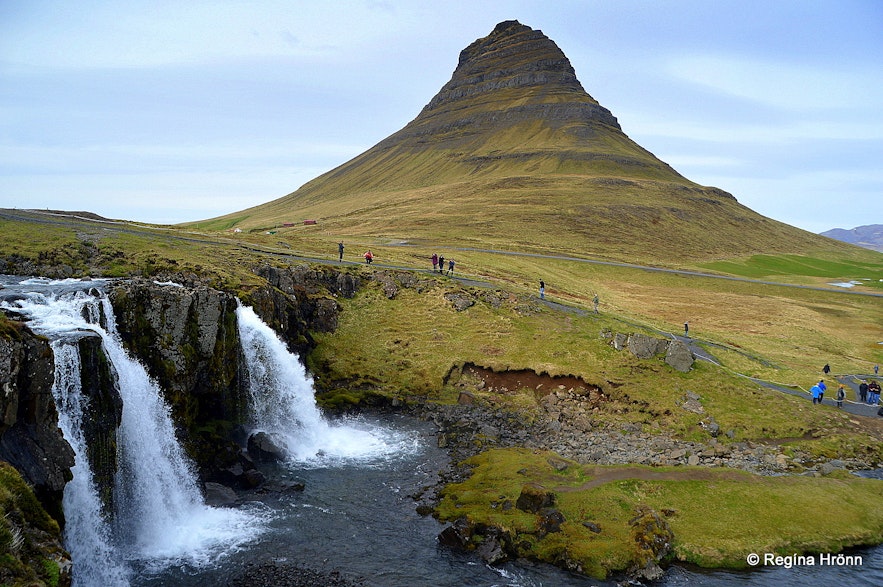 Now it was time to visit one of the most popular photo-stops on the Snæfellsnes peninsula - the iconic Mt. Kirkjufell (463 m) and Kirkjufellsfoss waterfall in Grundarfjörður fjord. Mt. Kirkjufell is freestanding and very beautiful - some even say it is the most beautiful mountain in the whole of Iceland!

There is a special photo, taken from a certain angle, which everybody wants to have, the one with the waterfall in front and the iconic Kirkjufell mountain in the background - it makes for such a beautiful photo. 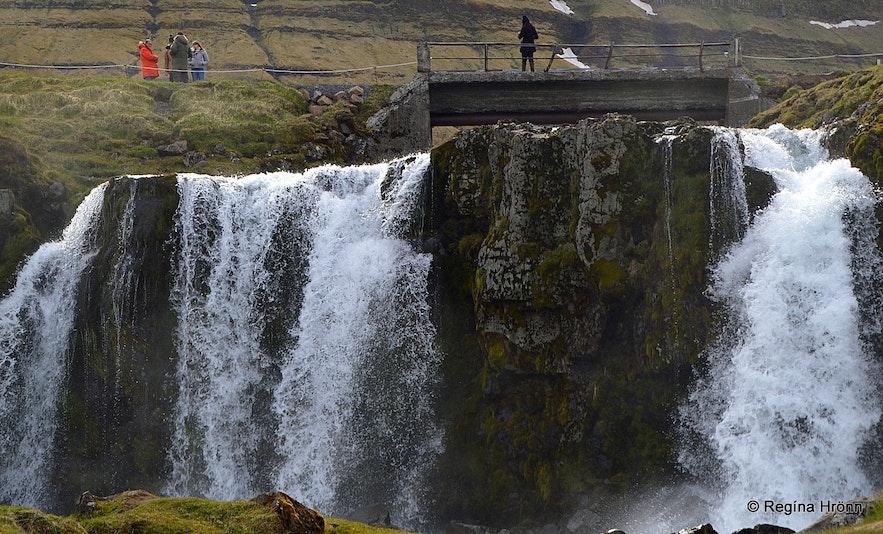 The old bridge where the road used to be

I have written a special travel-blog about Mt. Kirkjufell, where you can read up on it and get to know what the Danish sailors wanted to call this mountain. We are glad that that name didn't stick.

My grandfather, who was born at Fróðá and raised in Grundarfjörður, held this mountain especially dear and had a painting made of it by one of our noted painters, Finnur Jónsson.

That painting now hangs on the wall in my living room as Mt. Kirkjufell and the whole of the Snæfellsnes peninsula is also very dear to me, seeing that I am 1/4th Grundfirðingur :) 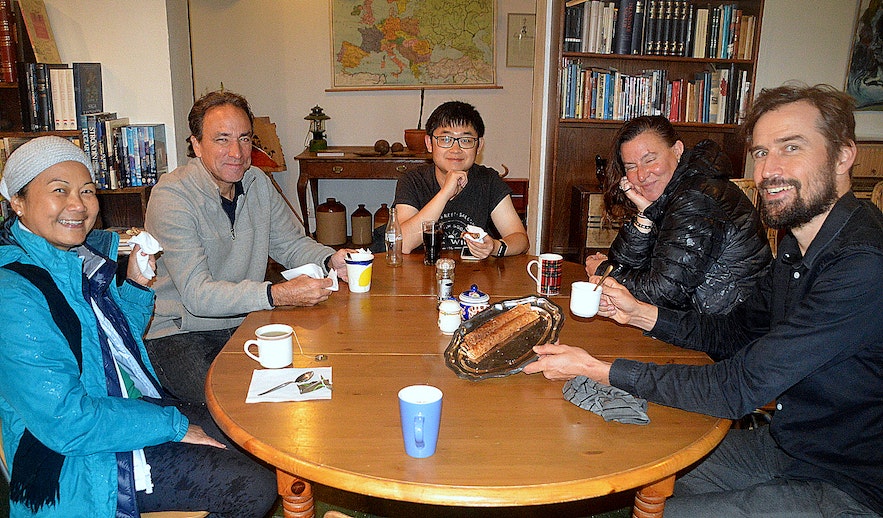 I must give my compliments to the driver-guide, the very knowledgeable German Björn, who has been living in Iceland for the past 8 years and speaks impeccable Icelandic.

He showed us around and told us stories and folklore of several Björns, who had lived on the Snæfellsnes peninsula through the centuries, which was both entertaining and informative.

I truly admire these guides, especially the driver-guides, who have the difficult job of both driving and guiding - and being entertaining on long day-tours - but our tour lasted for 12 hours! 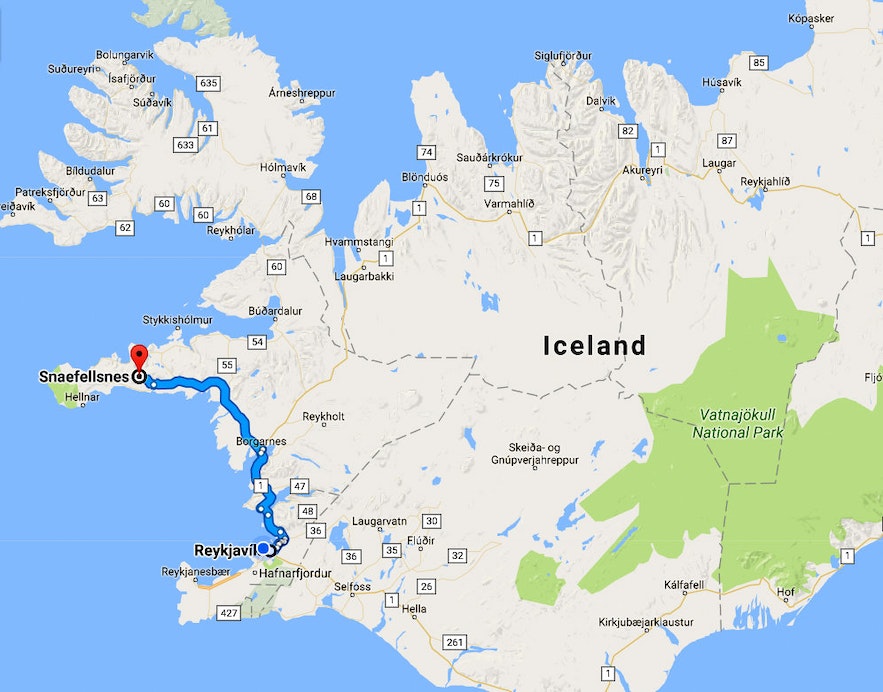 Mt. Kirkjufell in Grundarfjörður fjord was our last stop on this wonderful day-tour, called Snæfellsnes Minibus Expedition, and now we made our way back home to Reykjavík after a long day filled with the wonderful sights on the Snæfellsnes peninsula.

Also, check out the myriad of guided tours by Tröll to different locations in Iceland

Have a lovely time travelling with Tröll :)