A Local's Experience of the Golden Circle Tour in Iceland 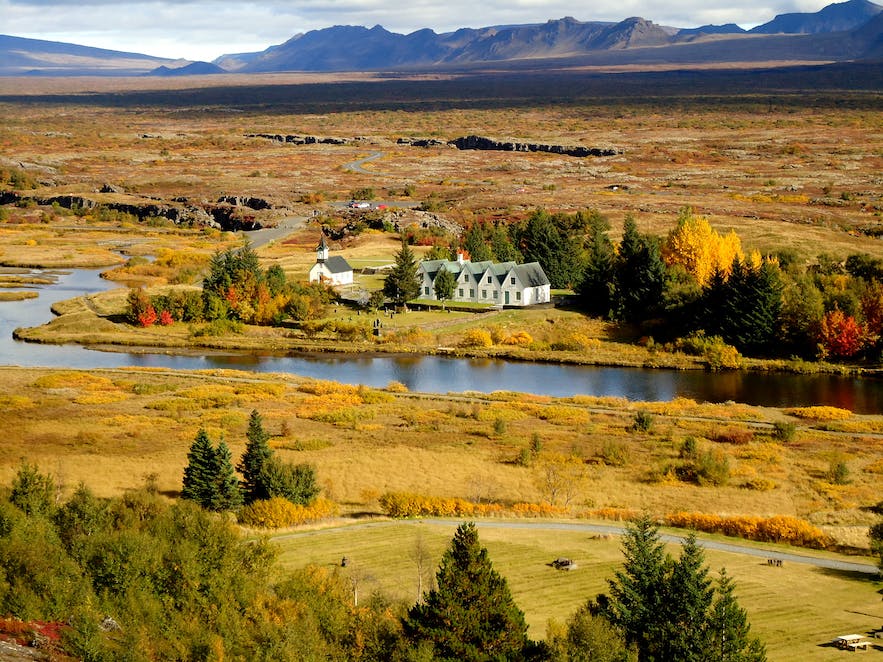 There are so many beautiful places in Iceland and interesting things to do, but the Golden Circle is where I take all my foreign friends which I show around my country. Since I first wrote this travel-blog I have added more recent photos from many visits to the Golden Circle of Iceland. The first stop on the tour is one of my most beloved places here in Iceland, Þingvellir National Park. I visit it often as it is only 50 km away from Reykjavík.

There are two extraordinary things about Þingvellir:

Firstly, it has been recognized by UNESCO as a cultural site connected to the Viking culture, as the Vikings established a parliament at Þingvellir in 930.

Secondly, Þingvellir National Park is situated on the tectonic plate boundaries of the Mid-Atlantic Ridge, the North-American and Eurasian continents, making it a very special tourist attraction. The tectonic plates are actually visible above ground and you can really experience the continental drift. To us Icelanders, Þingvellir is one of our greatest treasures.

On the tour, we were guided through this amazing place and learned about its history and walked inside Almannagjá gorge, which forms the eastern boundaries of the North-American Plate. I stopped by Nikulásargjá rift, which we Icelanders call Peningagjá rift - the Money rift, where it is a custom amongst us Icelanders to throw in some coins - it is said that your wishes come true if you follow the coin sink through the clear water and watch it land on the bottom of the rift.

It is the only place in Icelandic nature, where it is allowed to throw in coins. In the photo above you will see Peningagjá rift - there are other rifts here where you can try snorkelling or diving under guidance. It is believed that by this spot the oldest parliament of the Vikings was held and that it was moved later on to Lögberg in my first photo of Þingvellir, with the Icelandic flag. Our next stop was at Gullfoss - the Golden Waterfall from which the Golden Circle tour gets its name (gull=gold, foss=waterfall). Gullfoss is the best-known waterfall in Iceland and it is breathtakingly beautiful, 32 metres high, with two cascades, the first one is 11 metres high, and the second one is 21 metres high; they fall into the 2.5 km gorge which is up to 70 m deep.

The waterfall runs in the glacial river Hvítá (White River) which runs from the Langjökull glacier just above Gullfoss. River rafting is popular on the roaring glacial river. You can walk right up to the waterfall where you stand on the edge. It will make you drenched but it is a breathtaking experience. Please remember to be careful as the path gets slippery and fatal accidents have happened here. If it is too icy in the winter time the path is closed. Too many visitors don't pay any attention to the danger and climb over the gate :(

You can also walk up the stairs to get a better view from above and to visit the restaurant there. They are well known for their meat-broth "kjötsúpa" and here we stopped and had lunch.

Gullfoss is state property. The recent history of the waterfall is quite interesting and startling at the same time, as the waterfall was contracted to foreigners and almost harnessed.

The daughter of the farmer who owned this land, Sigríður in Brattholt (1871-1957), put up a fight to save Gullfoss and threatened to throw herself into the waterfall if a hydroelectric power station were to be constructed. This is a long story spanning over many years, but to make it short Sigríður saved Gullfoss and we are really grateful to her for that. The Lady in Gullfoss

There is another lady, which I love photographing when visiting Gullfoss; it is a rock lady, which not many people notice. She is located in the middle of the upper falls and I call her the Lady in Gullfoss :) For more photos and a much more detailed travel-blog about Gullfoss, check out: 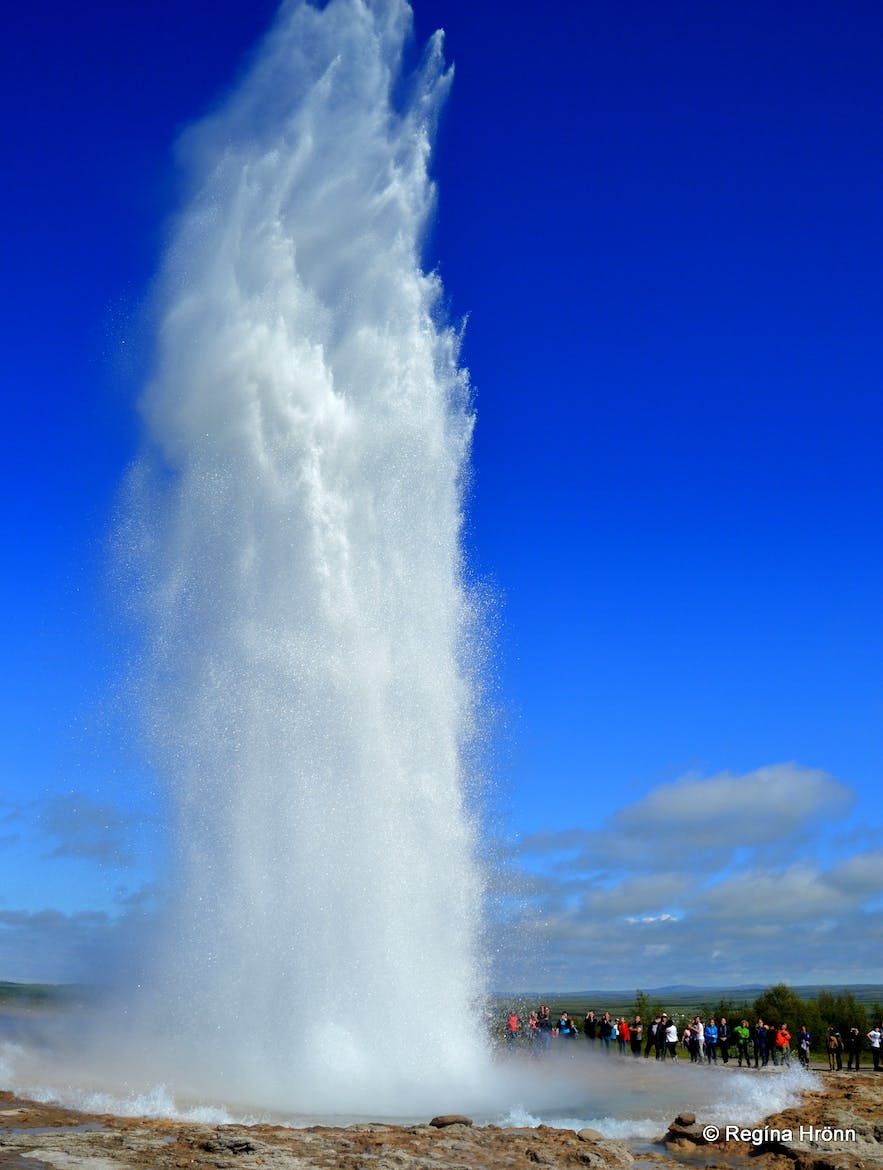 Our next stop was at Geysir geothermal area. Iceland is the only place in Europe where this natural phenomenon can be seen, so it is well worth a visit. Geysir has given its name to all other erupting hot-springs which are called geysers.

Although this geothermal area is named after Geysir then the "geysir" which erupts most frequently (like every 7-10 minutes), is called Strokkur. Geysir itself stopped erupting in 1915, but it must have been a sight to see as it went up to 70 metres into the air, but Strokkur is much smaller.

Icelanders tried reviving it by throwing soap into Geysir and forced an eruption and from time to time it erupted. Then after a big earthquake in the year 2000 Geysir started erupting again some 8-10 meters into the air, but much less frequently than Strokkur. Geysir erupts from time to time nowadays, although I have never seen it. But Strokkur erupts so frequently that one is bound to get a good photo of its eruption.

Take care that this is a high-temperature geothermal area and stay within the boundaries and don't touch the water as it is boiling HOT. The northern eye of Blesi

And if you don't want to be drenched stay up-wind. I myself have arrived there at the very moment of the eruption and as it can get really windy I got Strokkur right in my face.

There was no guidance on this stop, but one can read up on the geothermal activity in the Geysir geothermal area and wander around, having a look at the other smaller geysers, which don't erupt, but have a spectacular colour - and wait for Strokkur to erupt with the camera ready. 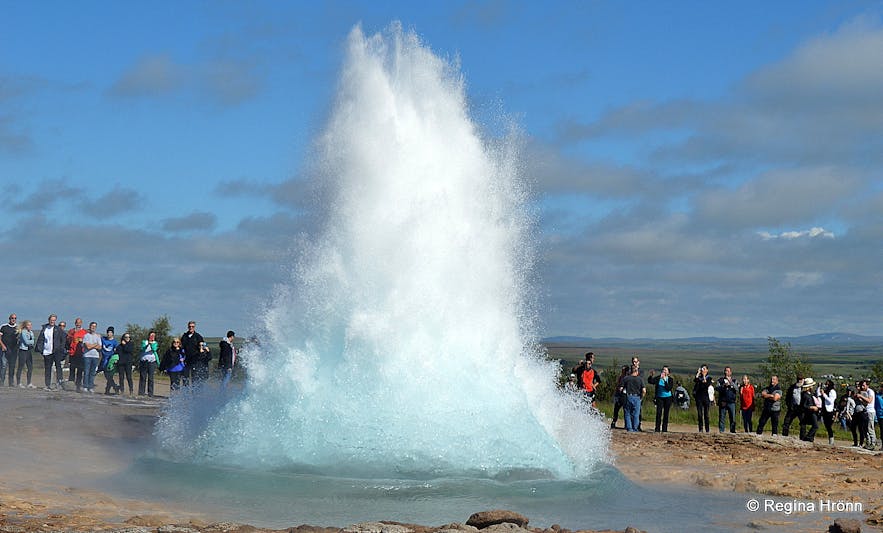 There are several restaurants by Geysir and a big shop, selling Icelandic woollen goods etc. The rye bread sold at the restaurants is baked in the ground in the Geysir geothermal area. There is one more photo opportunity at Geysir, which was not mentioned by the tour guide, but I always go there to have my photo taken; with the GEYSIR TROLL :)

We Icelanders not only believe in the existence of elves, we also believe in trolls, at least some of us. I have got so many photos of myself with the troll through the years - it is a friendly troll, different from some of the ones in our folklore, who eat humans. It used to be situated right by the road next to the hotel, but a new hotel is being built and the troll was moved.

Our next stop was at Skálholt cathedral - the old seat of the bishops. We stopped here for a short while, long enough to have a look inside this beautiful cathedral - which is my all time favourite here in Iceland.

Our tour guide surprised us with singing an Icelandic song and she sang it beautifully - the whole church got filled with her voice. Skálholtskirkja cathedral is one of Iceland's best-known historic places. Here was the centre of ecclesiastic power in Iceland and at Skálholt the first bishopric was founded back in 1056.

It was so beautiful when the sun reflected through the stained glass windows and filled the cathedral with multi-coloured light. Even the altarpiece of Jesus reflected the colours of the windows. It was just out of this world.

Skálholt is a place not to be missed during your Iceland visit, in my opinion.

Our final stop on the tour was at Hellisheiðarvirkjun power plant, which is the largest geothermal power station in Iceland. There is a Geothermal Energy exhibition at the power plant on how geothermal energy is harnessed there.

After visiting the power plant the circle was almost completed as we were only 20 minutes away from Reykjavík. A lovely day had come to an end and the guests were returned to their hotels. As can be seen then this Golden Circle Tour is extensive and some major historic areas in Iceland are visited on the tour. Then we have the:

Since I wrote this travel-blog it has come to my attention that alterations have been made to this tour, so instead of visiting the power plant a visit to the cultivation centre, Friðheimar, is now included in this tour. If you want to visit Hellisheiðarvirkjun then the Golden Circle & green energy|Exciting and educational minibus tour will take you there. 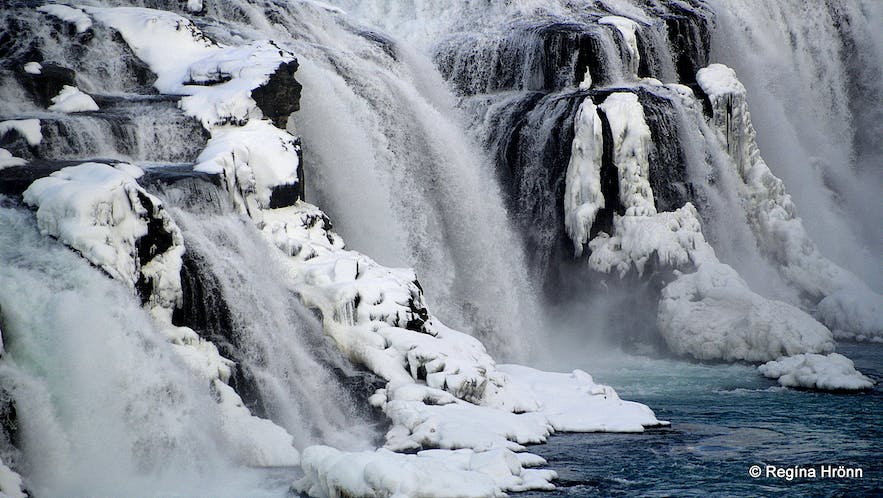 The Lady in Gullfoss in the winter time

You can also rent a car and drive the Golden Circle yourself.

Have a lovely time on the Golden Circle of Iceland :)