On the vast sand plains of Sólheimasandur glacial outwash in South-Iceland, you will find an abandoned plane wreck. The plane, a Super DC-3 C 117, made an emergency landing back in 1973 on Sólheimasandur, and was left behind by the US Navy. The plane has now become one of the major tourist attractions on the South Coast of Iceland.

This is not the site of a major plane crash though and there were no injuries. It was commonly believed that the plane crashed during a storm after it ran out of fuel when the pilot accidentally switched to the wrong fuel tank.

Top photo: Walking on top of the plane is not permitted anymore

The Wreck of the Abandoned Plane on Sólheimasandur

But Þórir Kjartansson from Vík, one of the former owners of Hjörleifshöfði promontory, told me another story. He was a member of the rescue team Víkverji back when the plane crashed, and the Americans told the rescue team that they had to land due to carburetor icing.

Þórir Kjartansson, whom I have been acquainted with since I wrote 2 travel-blogs on Hjörleifshöfði promontory, was kind enough to both send me photos he took on the day following the emergency landing, and to tell me a little bit about what it was like when he reached the plane the day after it had crashed:

"It was on the 21st of November 1973 that the plane made an emergency landing on Sólheimasandur. The plane was flying west, coming from Höfn in Hornafjörður where it was delivering equipment for the US radar station at Stokksnes.

The southwesterly wind was blowing forcefully accompanied by snow showers. 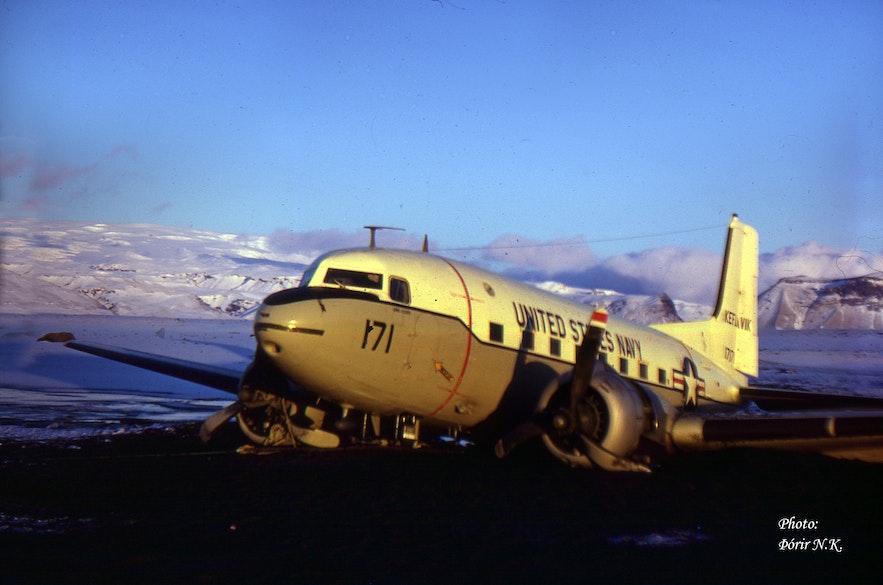 The plane had experienced some misfire for a while due to carburetor icing, so the Americans had sent rescue choppers and Phantom jets to its aid. So the crew had already been picked up when the rescue team arrived.

Three MPs had been left behind to guard the plane, and the following day rescue choppers showed up with more men; who stripped the plane of everything of value. 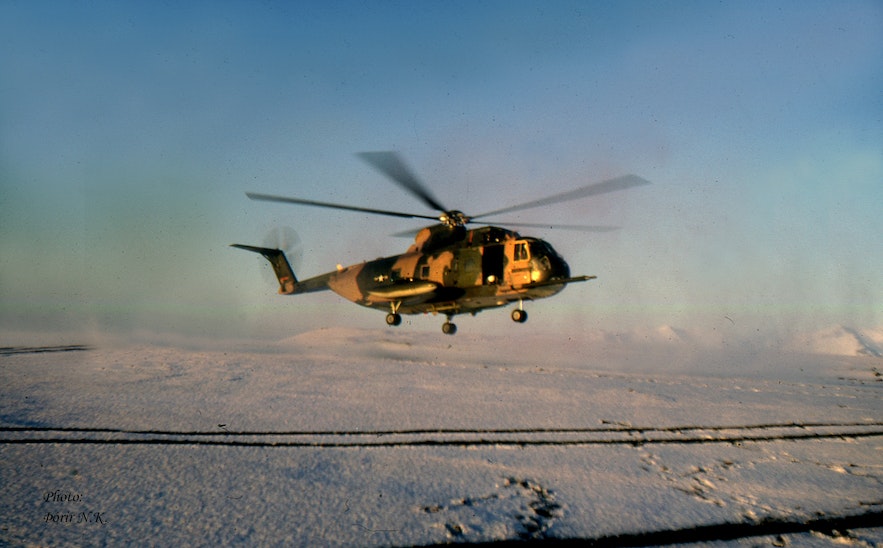 The wings were removed by the motors, and the fuel tanks, which were inside them, were blown up further east on the sand. On the first night, the tide reached, and flooded, parts of the plane, where the MPs were staying.

By now it was extreme frost and we picked up a gas oven so that the MPs could keep warm. The following day they drank coffee fortified with brandy to get warmed up". 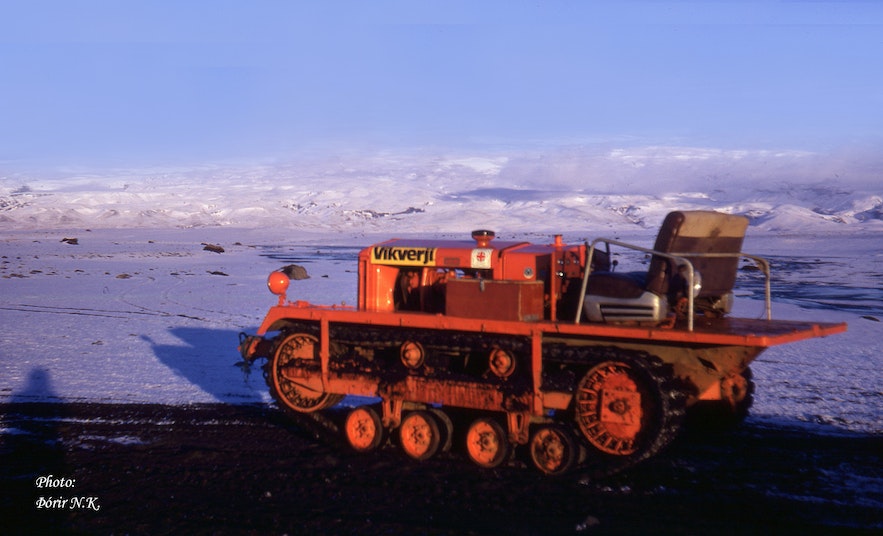 Þórir took the photo of the DC-plane the morning after the emergency landing when the rescue team was getting ready to pull the plane away from the tidemark, so it wouldn't be flooded again. They pulled the plane with the orange Drekinn - the Dragon, see Þórir's photo above.

The MP told the rescue team right away that carburetor icing had been the cause for them crashing. Being grateful for all the help provided by the rescue team, the Navy donated all the remaining fuel left in the plane's fuel tanks, around 6-800 litres, and the rescue team was able to fuel up the team's snowmobiles for a long time afterward with the plane fuel.

Many of the items removed from the plane were later used as spare parts for the revegetation plane Páll Sveinsson.

Later on, the plane was pulled to its current location by a bulldozer. 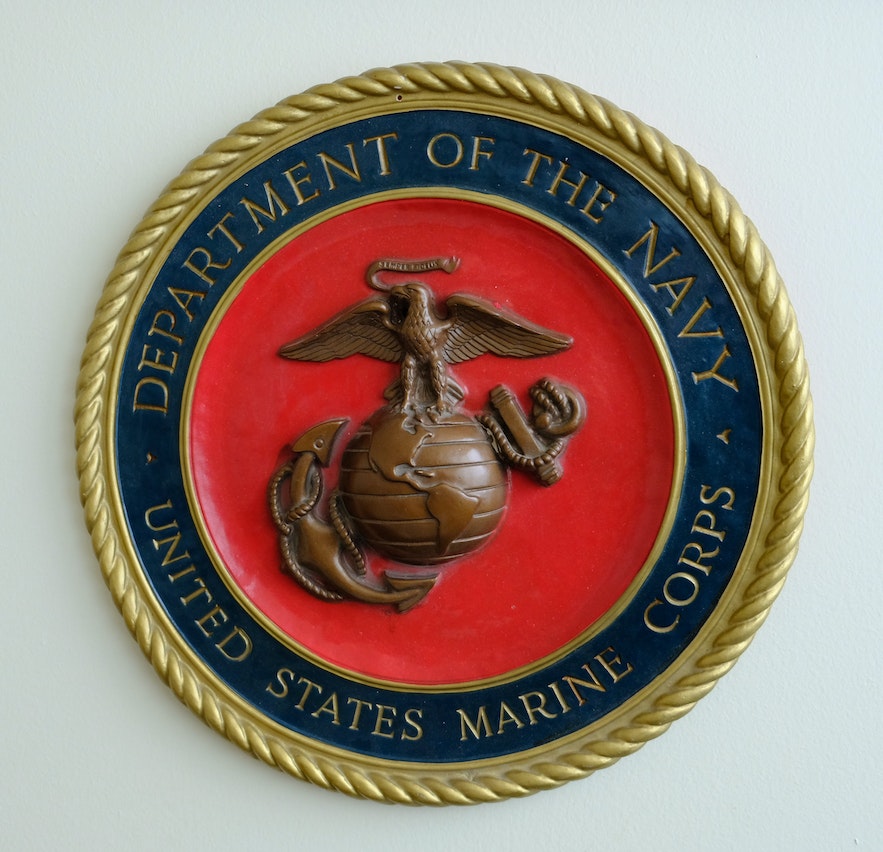 The Víkverji rescue team members were later on invited for a visit to the Navy Base at Keflavík, where they were presented with a shield with the coat of arms of the US Navy as a gesture of appreciation for their various ways of helping them out with the plane.

The shield is mounted on the wall of the rescue subcentre of Víkverji at Vík village in Mýrdalur in South-Iceland.

Thank you, Þórir, very much, for your account and the photos you allowed me to use for my travel-blog :)

By the Wreck of the Abandoned Plane on Sólheimasandur

The Douglas Dakota plane was left on Sólheimasandur, as recovering it was considered to be too difficult a task in such a desolate area. Things were different in Iceland back in 1973, and it wasn't until a year later, in 1974, that the ring road was completed when Skeiðará glacial river was bridged.

Until then you could only drive almost as far as Mt. Lómagnúpur and then you had to turn back the same way. Things have changed for sure in Iceland, and now people are flocking down to the plane wreck; on foot!

I visited the plane on several occasions back in 2015, when it was still possible to drive down to the plane. In March 2016 the landowners banned access to motor vehicles on the road leading to the plane, as there was so much traffic and off-road driving that the sand was covered in deep tire prints, especially around the plane. This is private land after all and the farmers have to protect their property.

The clouds make it look like the plane is on fire

The landowners welcome visitors on foot though, so if you are up for it you can walk the 3.5 km to the plane. The plane has become a very popular tourist attraction so you will see herds of people walking down to it nowadays.

It always amazes me to see how many people are visiting the plane, as only a few years ago the common Icelander barely knew how to reach it, I included (the locals of this area of course excluded).

By the Wreck of the Abandoned Plane on Sólheimasandur

The plane wreck became hugely popular after the release of Justin Bieber's "I'll show you" music video, where he skated on a skateboard on the top of the plane.

That music video has been viewed some 440.000.000 times so it had quite an impact on people, and now his fans want to visit the site of the plane wreck.

Fjaðrárgljúfur canyon, where Justin floated in his briefs in Fjaðrá river, also had a huge increase in visitors to the canyon. The number of visitors increased by a whopping 82% between 2016-2017 after the release of "I'll show you"!

Another music video was released back in 2015, a hugely popular music video, Dilwale, with Gerua - Shah Rukh Khan. Parts of the music video were shot on top of the DC-3 plane and this also had a great impact. I am a huge fan of it and cannot listen to it often enough.

Since these 2 music videos were released everybody seems to want to visit the plane wreck, and it has now become a landmark on Sólheimasandur, even though it cannot be seen from the main road.

I had looked for the plane wreck on my previous visits to the South Coast but was never sure about its exact location. Then somebody marked it on a map. And by now many an article has been written about the abandoned plane on Sólheimasandur.

When I, at last, visited the plane back in 2015, car traffic was still allowed. And during my 3 visits to the wreck in 2015, there were not many people around. Maybe 4-5 people, if that many.

Posing while being photobombed by 2 stand-up comedians at the windows behind me ;)

The following year I noticed the parking lot and signs, and every time I visit the South Coast of Iceland I see more and more cars on the parking lot. And silhouettes of a myriad of people walking up and down the path to the plane wreck.

The increase in visitors has been unbelievable, so it is always a WOW moment for me when I drive by on Ring-Road 1.

I never wrote a travel-blog on the abandoned plane wreck as I did not want to encourage people to visit it; little did I know back then that it was about to become a major tourist attraction ;) 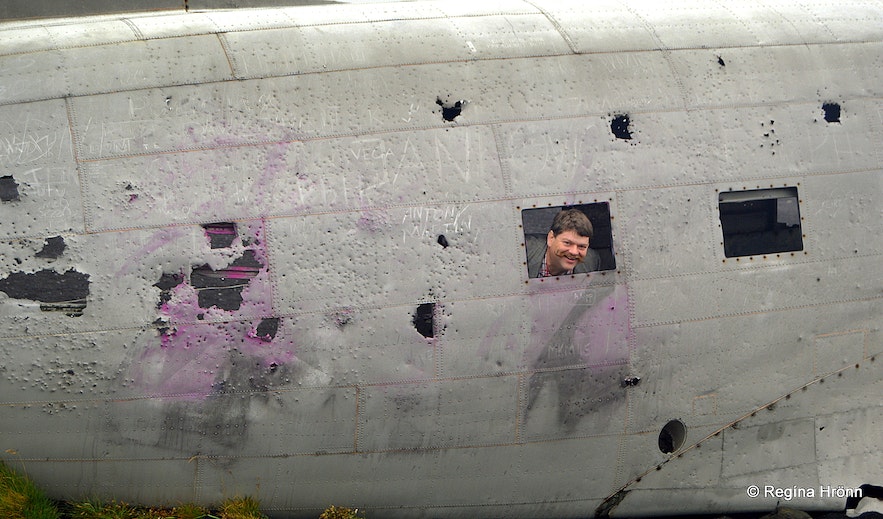 As you can see in my photo above then there are many bullet holes in the wreck. It didn't happen when the plane was stationed in Korea or Vietnam during the wars, but when Icelandic hunters used it as target practice.

The plane was also vandalized when it was tagged and pink graffiti was sprayed on it. Efforts were immediately made to remove the graffiti, and you can see the difference in my photos, which were all taken in July and September back in 2015.

The Wreck of the Abandoned Plane on Sólheimasandur

A word of warning: Do not attempt to walk down to the plane in the wintertime. There can be sudden changes in the weather and blizzards are not uncommon here in Iceland. You for sure do not want to get lost on the vast sand plains of Sólheimasandur glacial outwash in the wintertime.

Back in November 2017, some travellers had to be rescued by the plane when they got stranded by it in a storm and couldn't find their way back. It is not cool, so always check out the Icelandic weather report before visiting the plane. And preferably choose a guided tour to the plane, so the rescue teams don't have to be disturbed; they consist of working people who are doing this as voluntary work in case of an emergency.

Sadly, we have already had 3 fatal incidences by the plane: a tourist visited the plane in October 2017 and died of hypothermia and exposure by a glacial river close to the plane :( And in January 2019 a young Chinese woman and a man were found dead by the trail to the plane. We assume that they got caught in a blizzard and died of exposure. This is heartbreaking :(

On a rainy day by the plane, Pétursey in the background, where elves reside

All you need to know about the Sólheimasandur plane wreck

Guided tours to the plane wreck:

And Icelandic Mountain Guides offer a bus ride down to the plane wreck.

Rent a car in Reykjavík - then walk for 3.5 km down to the plane

I have written several other travel-blogs about interesting locations in the vicinity of the plane:

Have a lovely time exploring the South Coast of Iceland :)