This travel-blog is the 5th part of my 8 part series of travel-blogs about Eyjafjörður fjord in North Iceland. My last travel-blog was about the most famous ghost story in Iceland "Djákninn á Myrká"- the Deacon of Dark River.

I made a detour from Eyjafjörður fjord into Hörgárdalur and Öxnadalur valleys to show you where the ghost story took place. And I must show you my all-time favourite mountain in Iceland, the pinnacle Hraundrangi in Mt. Drangafell.

Top photo: Hraundrangi in the clouds 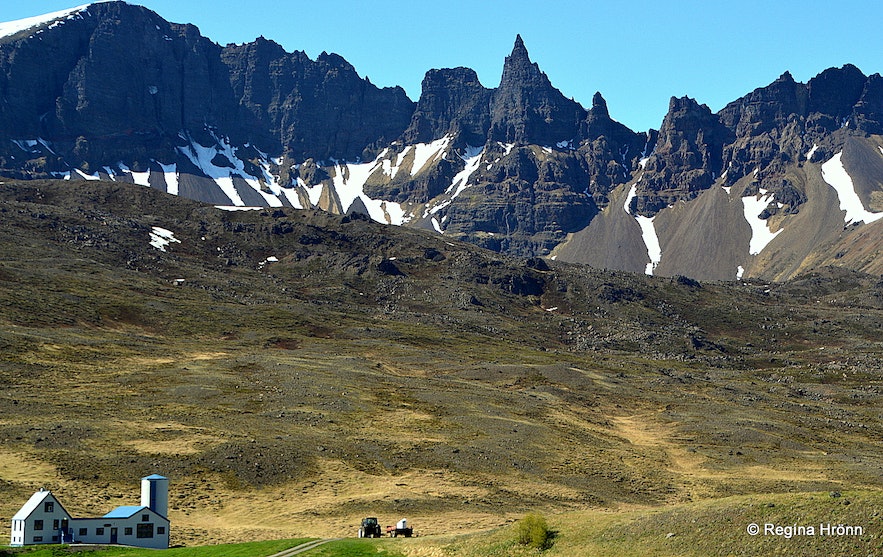 It is an absolutely stunning mountain, like something out of a fairytale, a cathedral-like mountain, and one just has to stop and admire it. The mountain peak Hraundrangi makes it ever so majestic.

Below the mountain is the farm Hraun, after which Hraundrangi was named. The farm Hraun was the birthplace of the beloved Icelandic poet and natural scientist Jónas Hallgrímsson (1807-1845) who wrote some of Iceland's most beautiful poems.

It is not the farm in the above photo though, this is Háls farm, it just makes for a good photo motif. Hraun is a little bit further east. 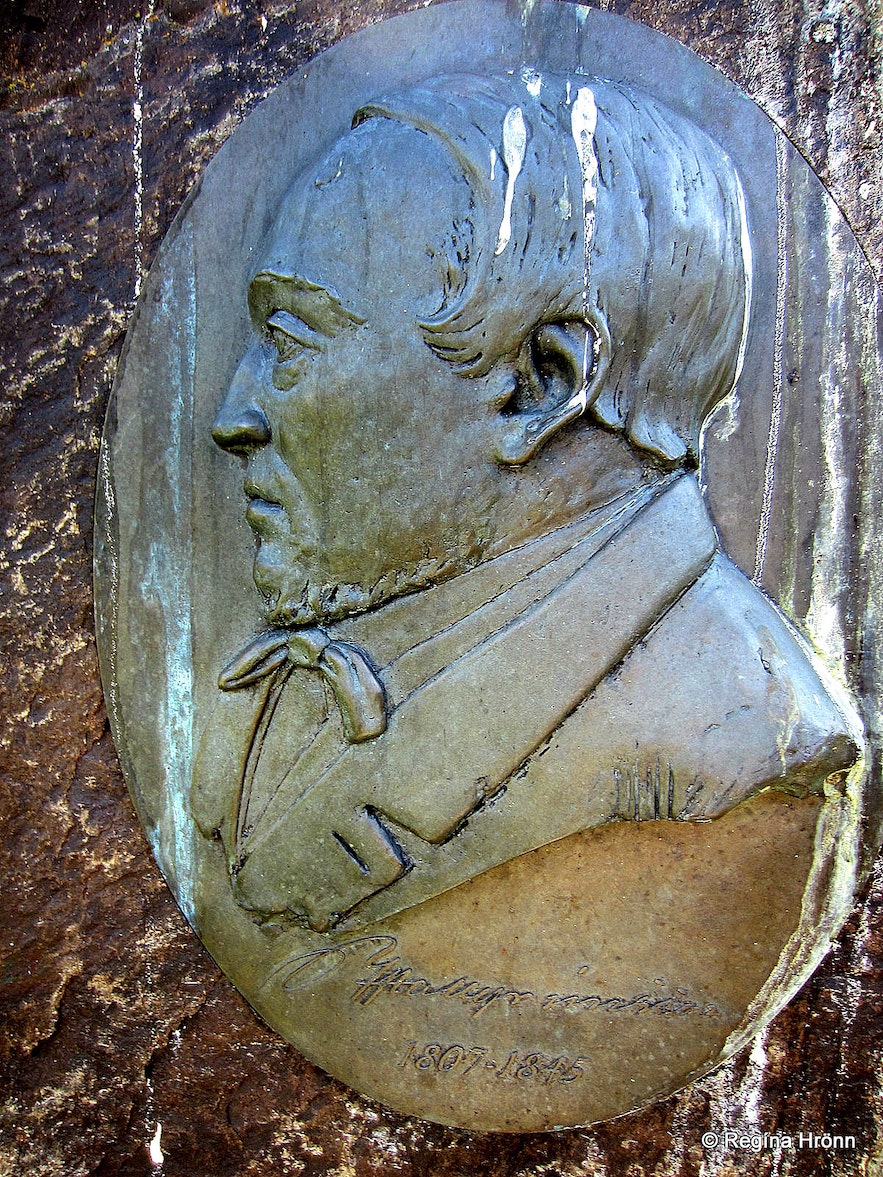 The memorial for Jónas Hallgrímsson in Jónasarlundur

Jónas Hallgrímsson was born at Hraun in Öxnadalur on the 16th of November in 1807 but moved to Steinsstaðir close by a year later, where he grew up. He died in Copenhagen in 1845, only 37 years old.

There is a lovely grove right by the main road in Öxnadalur valley, the Jónas Memorial Grove (Jónasarlundur). It was consecrated in 1996 and dedicated to the memory of Jónas Hallgrímsson. The grove was consecrated that year in memory of the 150th anniversary of Jónas.

You will find a memorial stone in the Memorial Grove with a low-relief of Jónas. 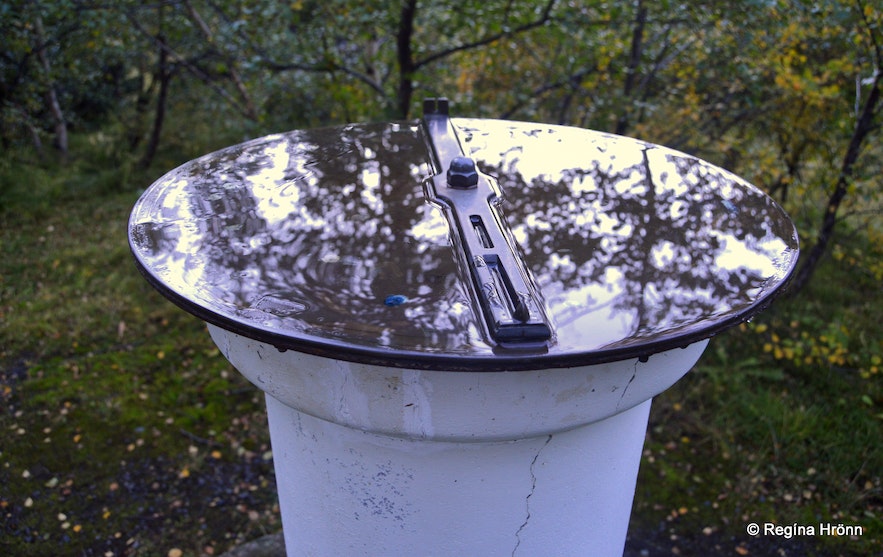 Inside the grove, you will also find a view-dial, erected in 1958 by Ferðafélag Íslands, Akureyrardeild. It shows the names and height of the surrounding mountains and is the 8th view-dial erected in Iceland.

The trees have grown so much since the view-dial was put up that they are now totally blocking the view. I have seen old footage from Jónasarlundur grove and back then it looked totally different and the view-dial stood tall on a mound with very few trees around it.

My father-in-law, Jakob Hálfdanarson, designs view-dials and we are always on the lookout for them when travelling around Iceland. 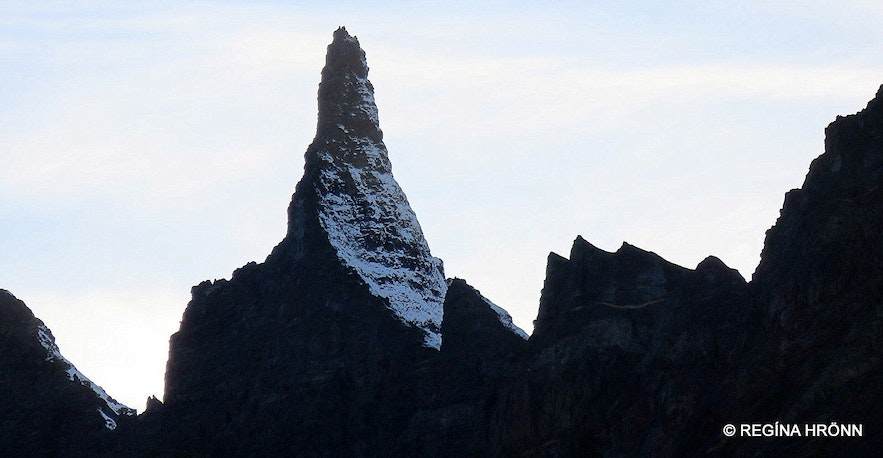 Mt. Hraundrangi is 1,075 meters tall and was believed to be unscalable, but in 1956 three climbers conquered the mountain, 2 Icelanders from the Icelandic Air Ground Rescue Team, and a Lieutenant of the US Air Force. It took them 6 hours to climb the peaks and the surface on top of the peak was less than half an m2.

Since then the mountain has been climbed many times and in 1991 eleven people mounted it on the same occasion. Something around 150 people have now managed to climb this magnificent peak. You can watch a video of a 2020 climb on Vísir, it is truly amazing. 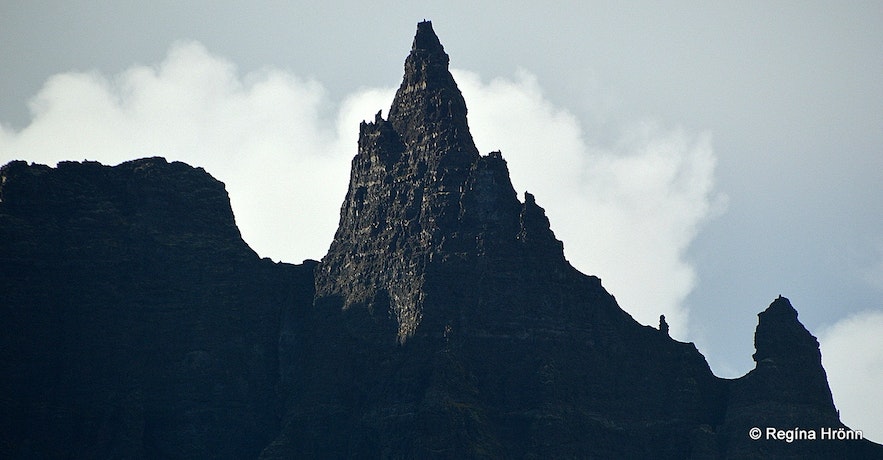 Icelandic folklore tells us about a keg filled with money in the peak and the one first climbing the peak would get that keg. The first climbers didn't find any trace of that keg; was there maybe someone who had preceded them...?

Another legend tells us about Grettir Ásmundarson, the hero of the Icelandic Grettir's Saga, climbing the mountain and leaving his knife and belt up there.

Cars often stop in the middle of the road when people spot this beautiful mountain and stop to admire it, as it all of a sudden appears like a beautiful castle.

But if you drive a little further on your right-hand side you will find a driveway where you can stop and take pictures.

A little bit further on you will also find a driveway on your left-hand side and can get out of the car there. It is so worth it, Hraundrangi is just breathtaking.

No matter how many times I visit North-Iceland I always stop and admire this mountain and take photos. 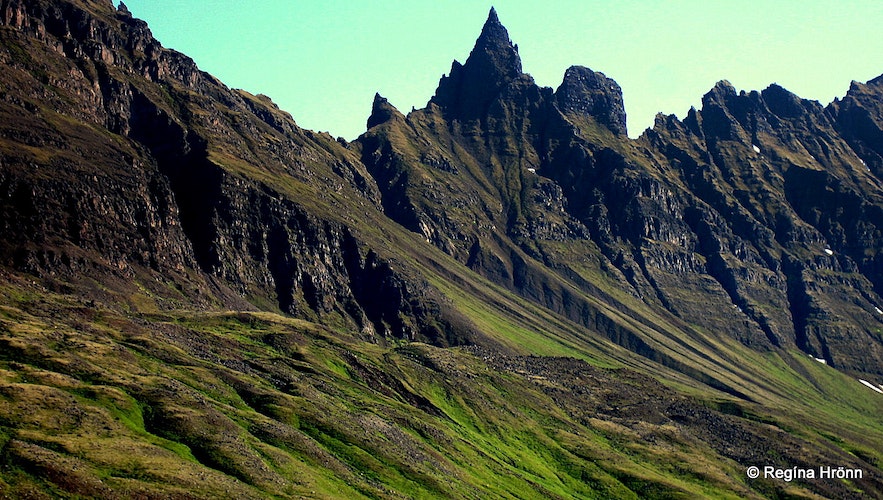 There is another way of seeing the mountain and that is to drive behind the mountains into Hörgárdalur valley and see Hraundrangi from the other side; from Myrká where the grave of the Deacon of Dark river is located.

The mountain looks equally majestic from Hörgárdalur valley, the less-visited side of it.

The locals in Hörgárdalur valley don't refer to the pinnacle as Hraundrangi, only Drangi. And that is understandable as the farm Hraun after which Hraundrangi is named is in the other valley. 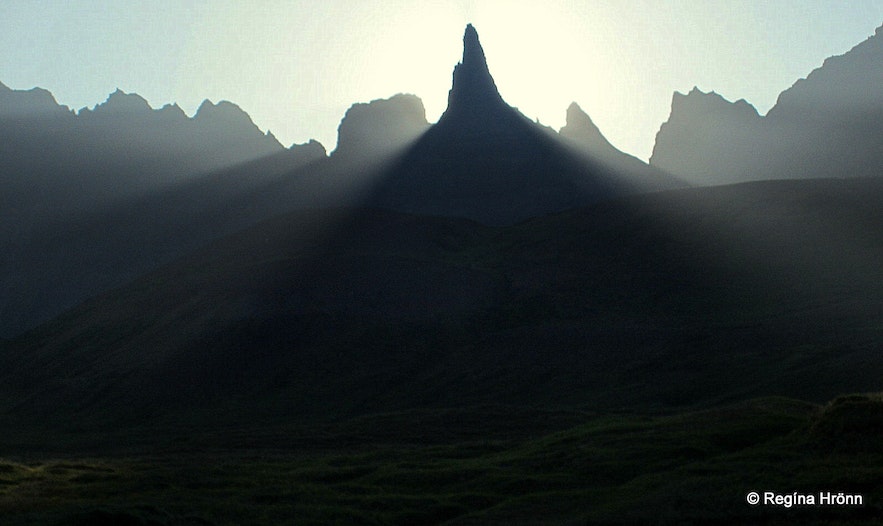 As you can see from the photos, which are taken over a period of several years, I just cannot get enough of this mountain. I wish I had had a better camera when I took the last photo as it was breathtaking seeing the peaks flooded with sunlight.

To reach this area you can rent a car in Reykjavík and drive up north - Hraundrangi is 372 km away from the capital city. 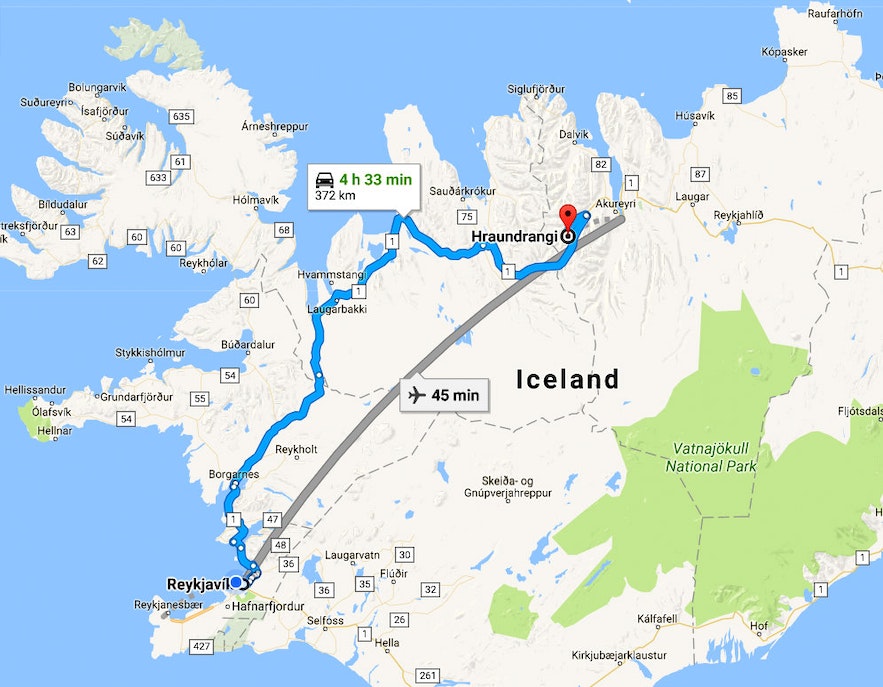 This is part V in my series of travel-blogs on Eyjafjörður fjord - you can join me on a tour of this longest fjord of Iceland with some detours into some interesting valleys: